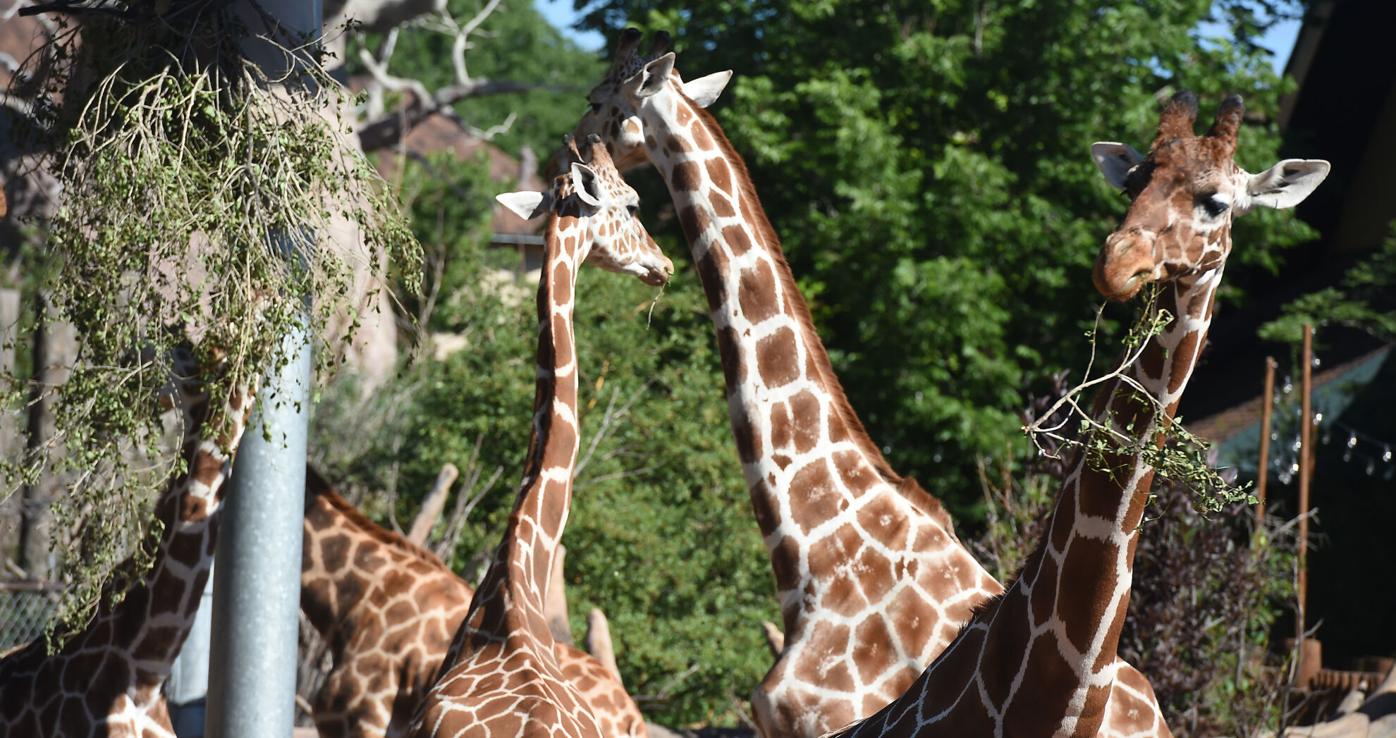 Giraffes at the Cheyenne Mountain Zoo get their breakfast of leafy branches. 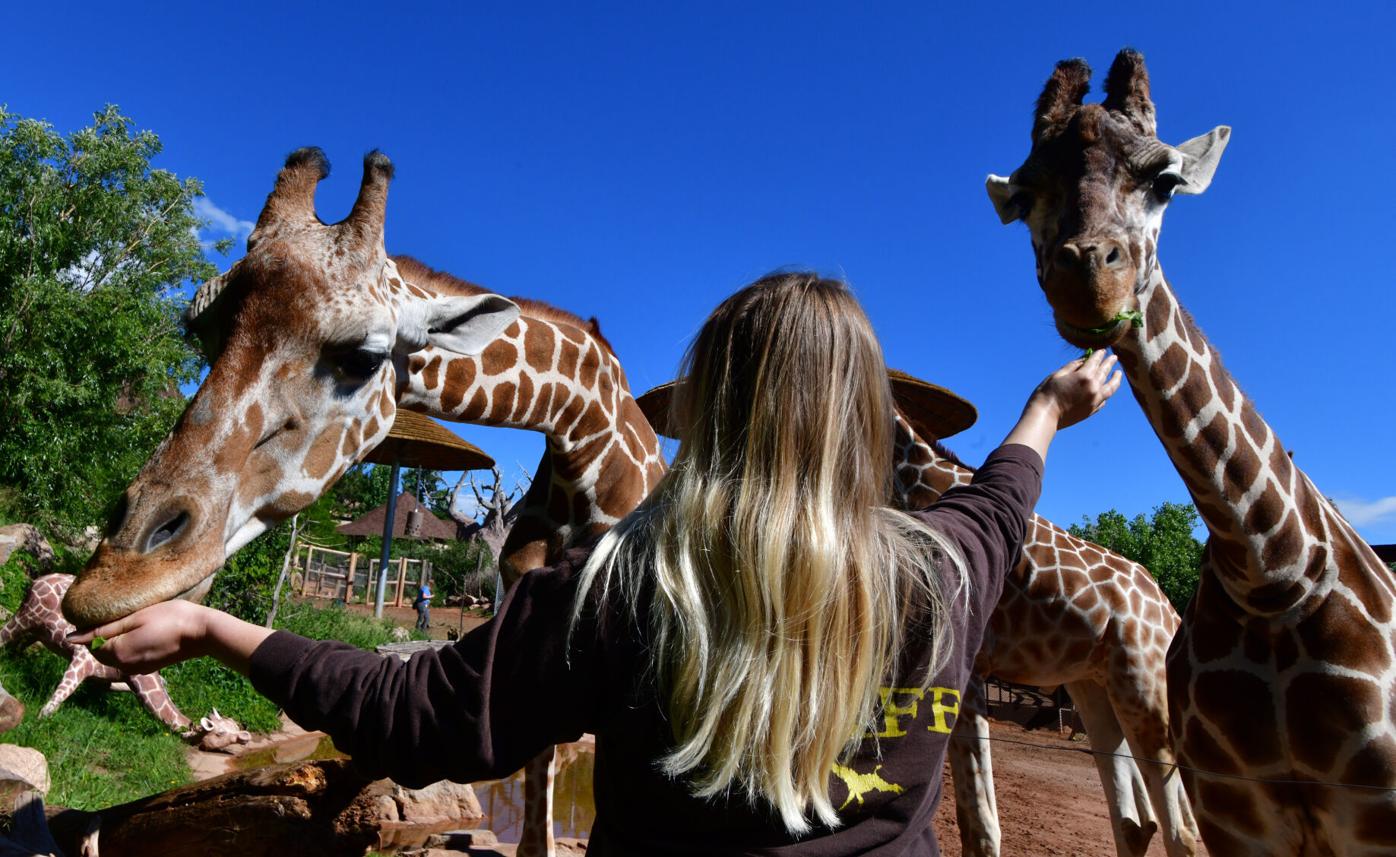 Rachel Wright, PR and social media manager at the Cheyenne Mountain Zoo, does a two-handed feed with the giraffes. 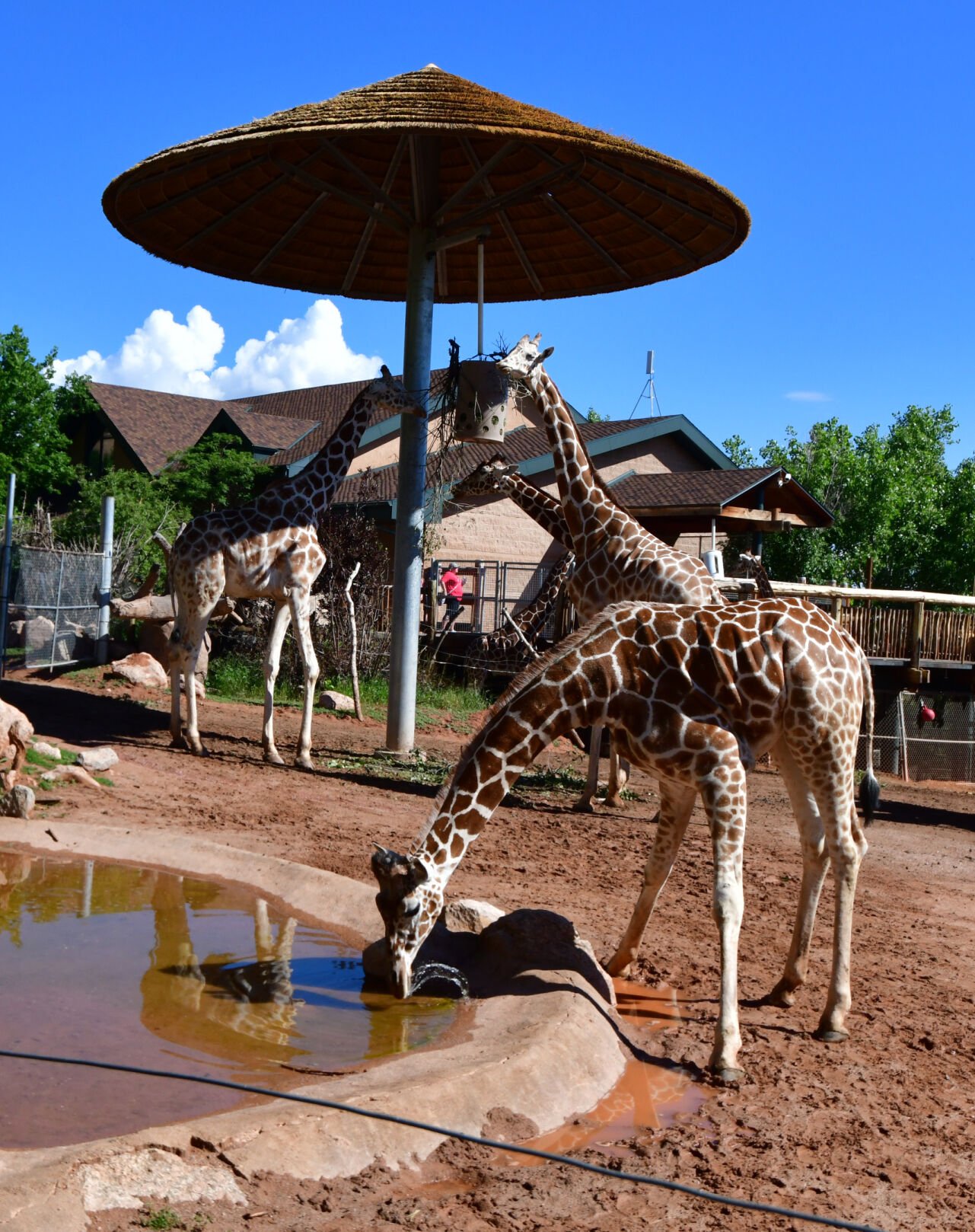 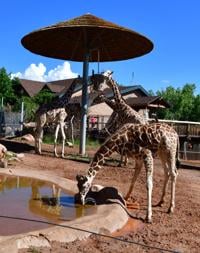 One of the giraffes shows how they have to spread their front legs to drink water at the Cheyenne Mountain Zoo on Tuesday, July 6, 2021. 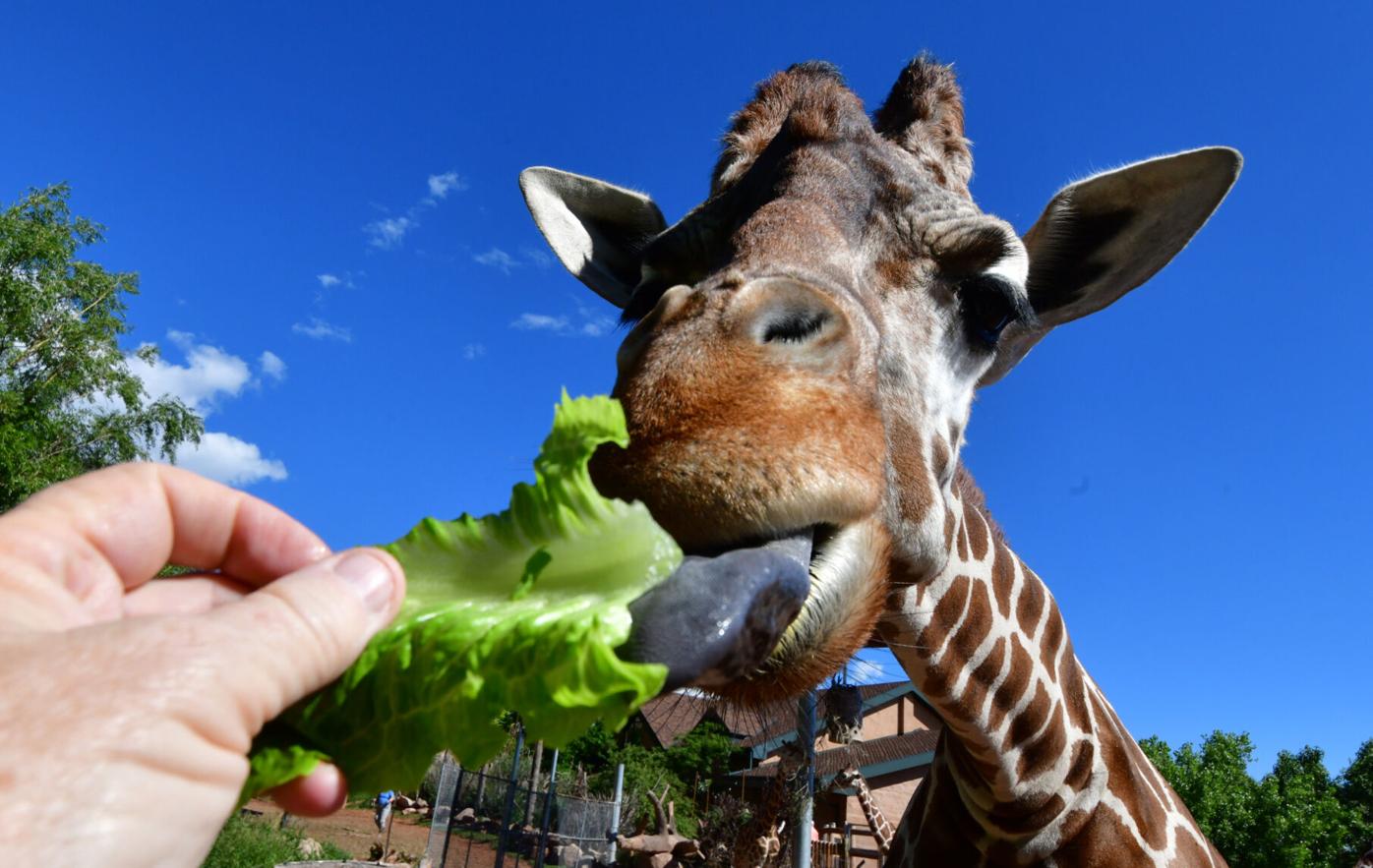 Guests to the Cheyenne Mountain Zoo can get up close and personal with the giraffes and can feed them by hand. 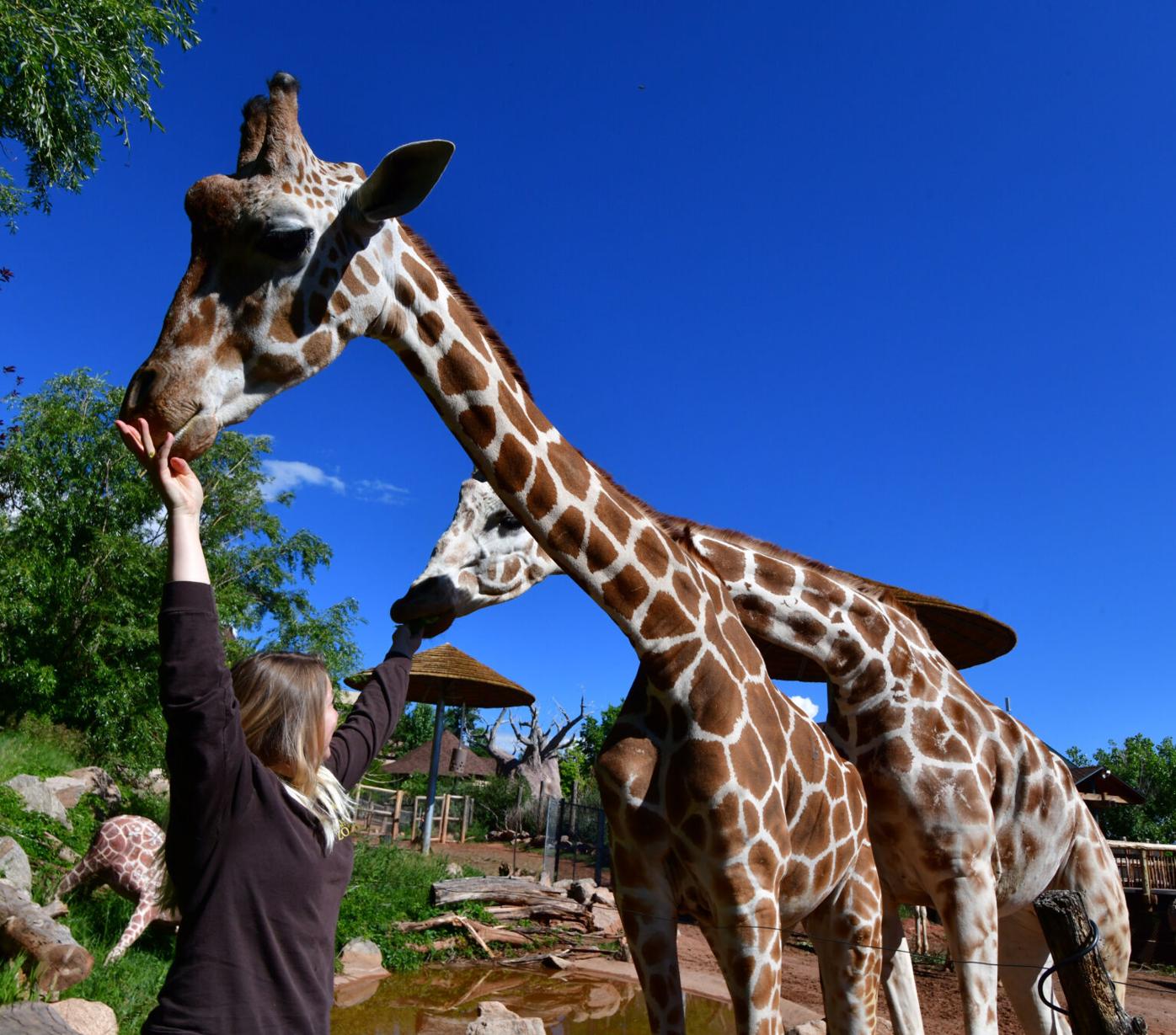 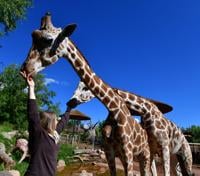 Rachel Wright, PR & Social Media manager, does a two-handed feed with the giraffes at the Cheyenne Mountain Zoo on Tuesday, July 7, 2021. (Photo by Jerilee Bennett, The Gazette 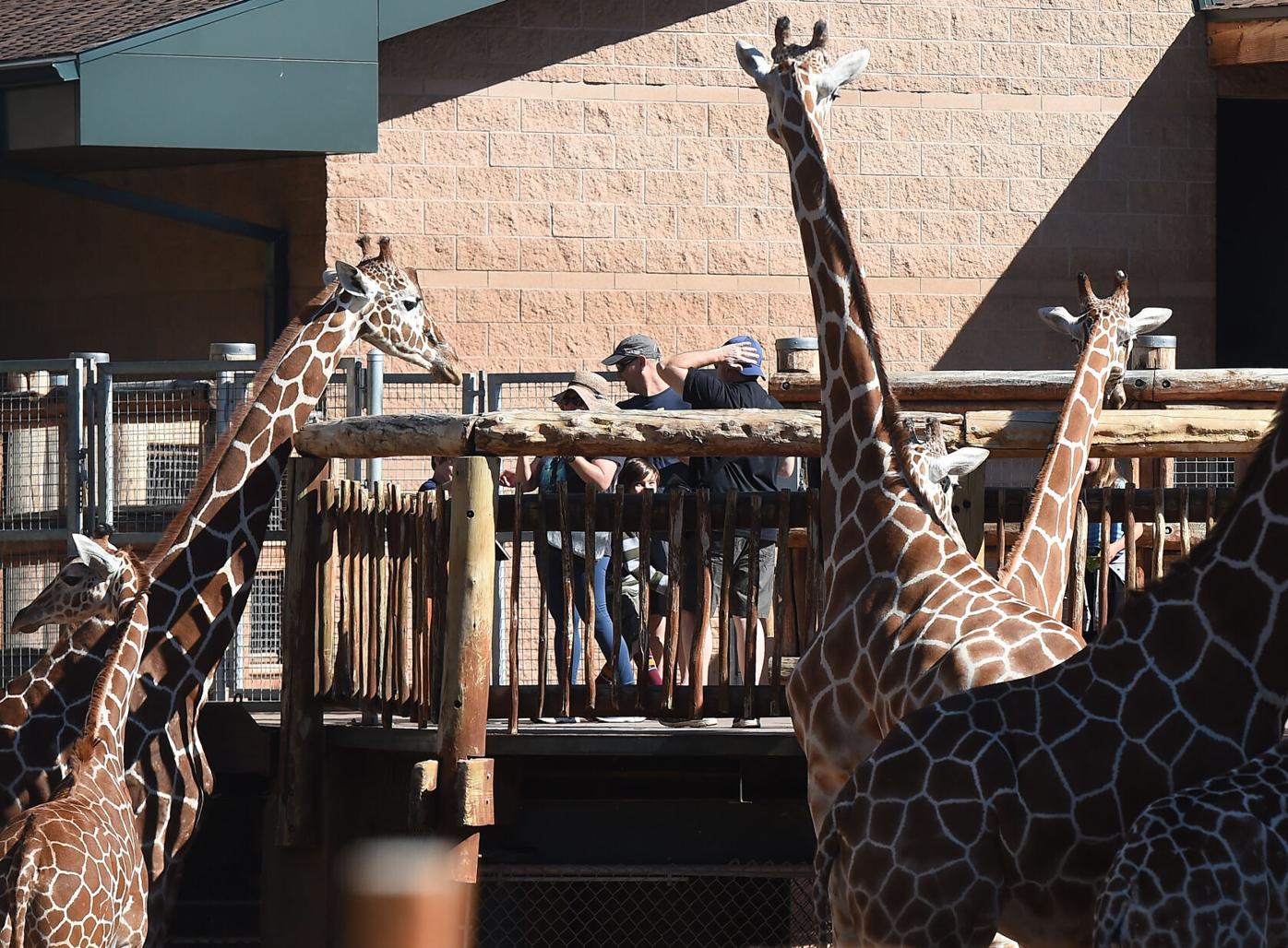 Guests to the Cheyenne Mountain Zoo can get up close and personal to the giraffes and can even feed them by hand. Tuesday, July 6, 2021. (Photo by Jerilee Bennett, The Gazette 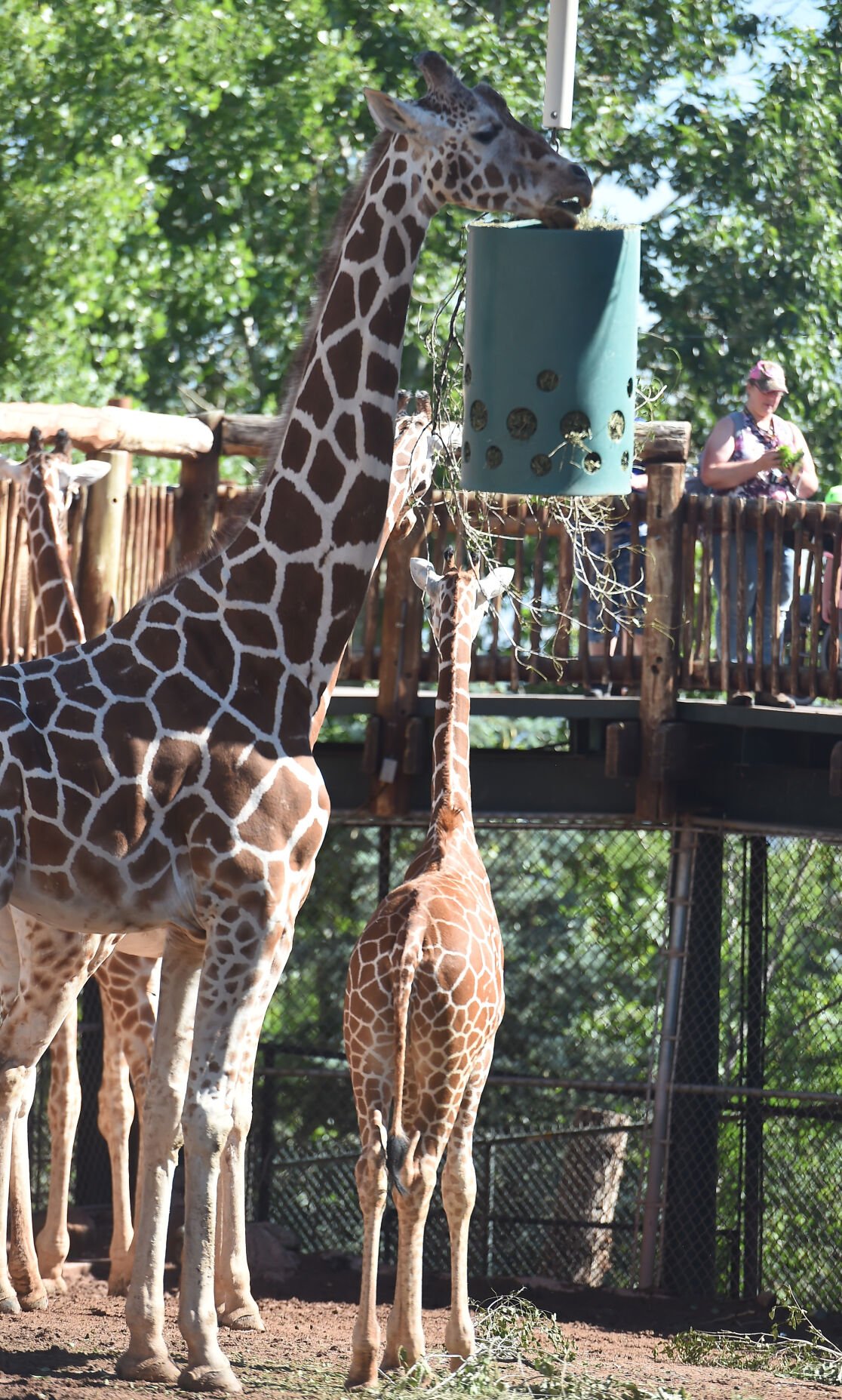 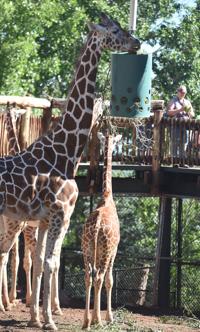 Guests to the Cheyenne Mountain Zoo can get up close and personal to the giraffes and can even feed them by hand. One of the baby giraffes eats from the bottom of a feeder. Tuesday, July 6, 2021. (Photo by Jerilee Bennett, The Gazette

Giraffes at the Cheyenne Mountain Zoo get their breakfast of leafy branches.

Guests to the Cheyenne Mountain Zoo can get up close and personal to the giraffes and can even feed them by hand. One of the baby giraffes eats from the bottom of a feeder. Tuesday, July 6, 2021. (Photo by Jerilee Bennett, The Gazette

There’s one guarantee when you visit Cheyenne Mountain Zoo: You will come face-to-face with a giraffe.

The ginormous herbivores with their to-die-for long eyelashes aren’t the award-winning zoo’s logo for nothing.

And even better, there’s about a 100% chance your meet-and-greet will result in a friendly exchange, warming even the Grinchiest heart.

“People don’t realize how gentle they really are,” said Jason Bredahl, animal care manager in African Rift Valley. “These guys will approach you super slow and calm. You can see they’re interacting so nicely with guests. They’re not going to run away or be super timid around people. They want to interact with people in human care.”

Giraffes have been at the zoo since 1954. A breeding program also has been around for almost as long and has produced more than 200 calves. Right now, the herd stands at 17, and includes little girl BB, which stands for Bailey’s Baby, who was born in September.

Who doesn’t love a good elm tree first thing in the morning?

A lot of Colorado Springs residents who might think of the prolific trees as “weed trees,” that’s who. But giraffes do not share the sentiment. Heaven to them looks like a bucket of elm tree boughs, which keepers hang up for breakfast. The long-necked giraffes gather around the buffet table and munch away. With the help of their up to 18-inch tongues, they eat the leaves, strip off the bark and chow down on the twigs. Those boughs will be bare by the time they’re done.

Eating is a daylong endeavor.

Giraffes pretty much forage for food all day and much of the night, seeing as they don’t need much sleep. Maybe a few minutes in the wild, and a few hours in human care. Much of the rest of the time, they’re strolling through their yard, looking for romaine lettuce handouts from guests, and the alfalfa hay keepers stuff inside barrels. They also mosey over to the red Jolly Balls that contain grain and hang from fences, and wouldn’t turn down a nice carrot or yam. Altogether, these characters will eat an amazing 50 pounds of food per day.

No, that doesn’t mean they like to go find a quiet corner and sit and ponder the world for awhile. It means they like to rechew their food, much like a cow does. Giraffes have four stomachs, and sometimes you can see a bulge of food make its way up their neck and into their mouth, where they rechew it to extract more nutrients.

How the heck do you know who’s who?

It’s all about the spots, mostly. Though it’s not hard to miss Khalid, the herd’s breeding bull who stands 16 feet tall and weighs more than 2,500 pounds. Another male, Masshama, is close in height to Khalid, and easy to pick out due to his lack of tail hair. But otherwise, keepers know who’s ambling over to say hi by the pattern of their spots, which is unique to each giraffe. “It’s like a fingerprint,” Bredahl said.

Physical touch. You might see them rubbing their neck or head on each other. That’s their way of saying hi, how’s it going, I like you. They’re checking in with each other and also being nosey about what their pal is eating when they put their faces next to each other. Some of the giraffes run in little cliques, such as the teenagers of the herd: Ohe, Payna and Viv. But Ohe, who’s 2 and a little shy, according to Bredahl, also loves his BB. He’s always hanging around her.

How to train a giraffe.

Bring a stack of Wasa crackers. What M&Ms are to you, Wasa crackers are to a giraffe. Keepers use the treat for training, which includes husbandry. The giraffes are trained to present their foot on a block so the farrier team can come in once a month and do hoof care. Much like our fingernails and hair, their hooves grow throughout their long lives, which can mean into their early 30s in human care. Masshama also was trained to accept stem cell treatments through a neck vein. They were administered after he fractured a digit in his foot, and intended to help reduce inflammation and help with the healing process. “We think they work,” Bredahl said. “He’s moving around at a normal giraffe gait and mobility.”

The Olympics might be happening on the other side of the world, but the Summer Games won’t feel so far away this weekend.