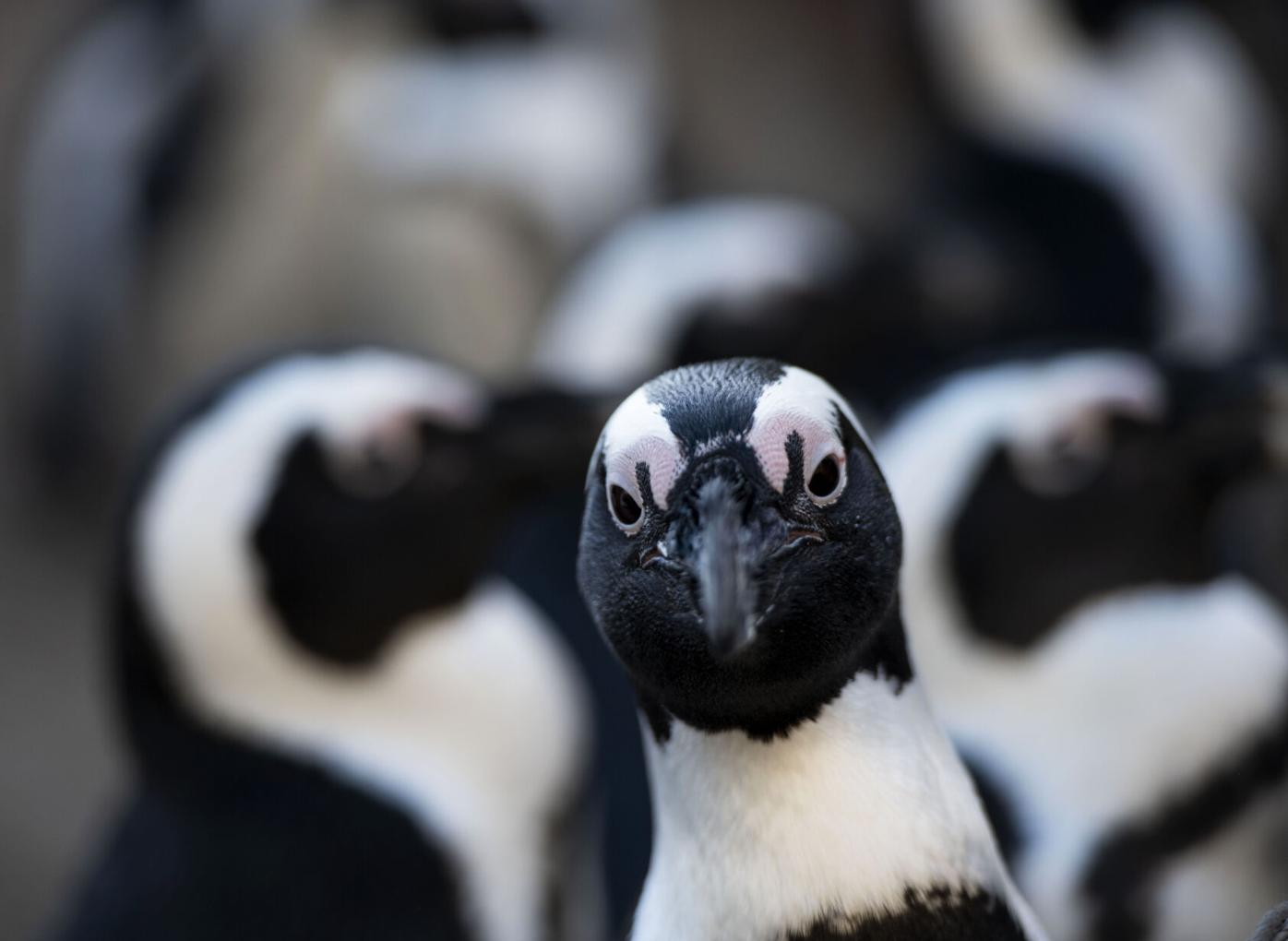 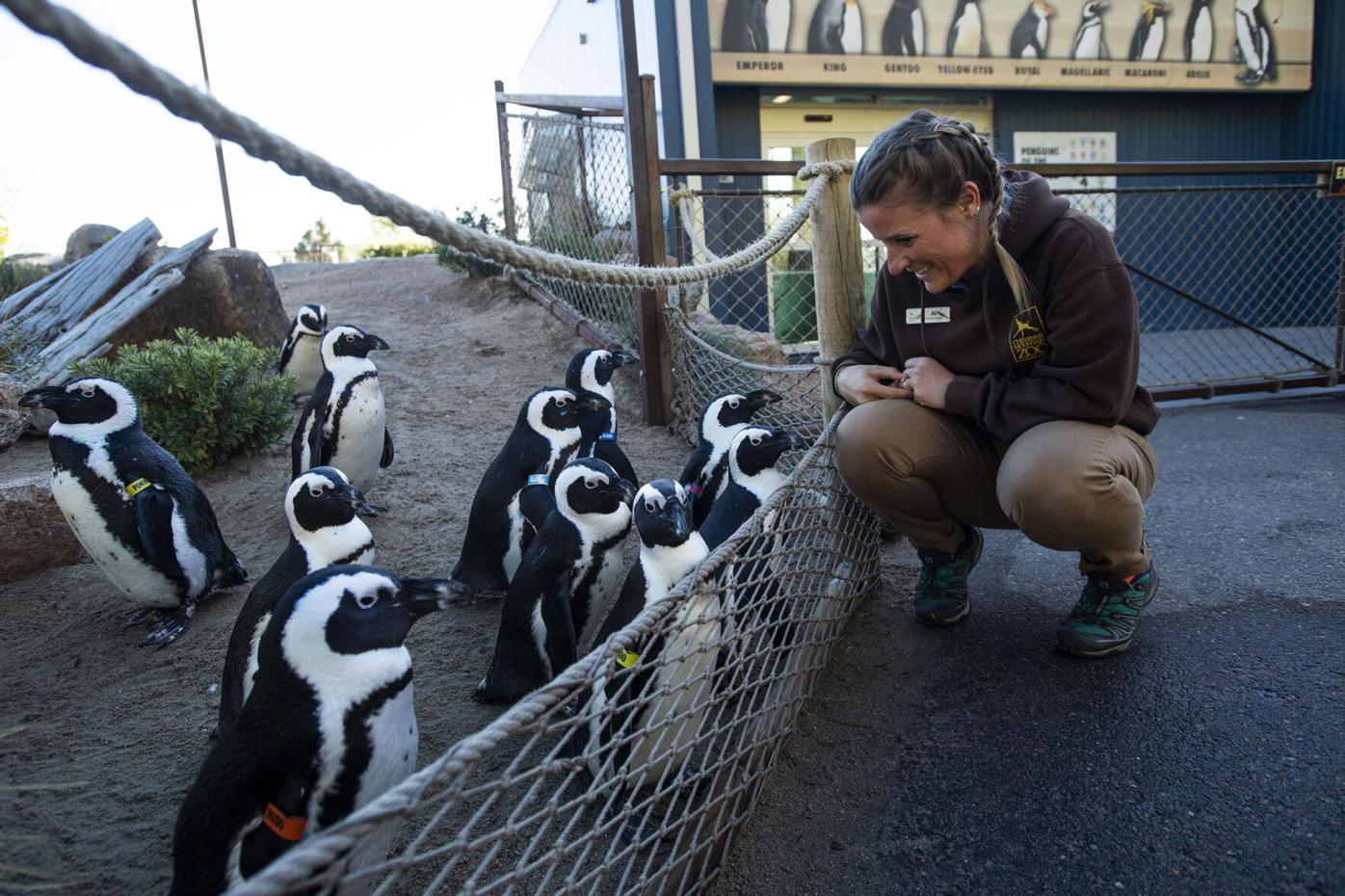 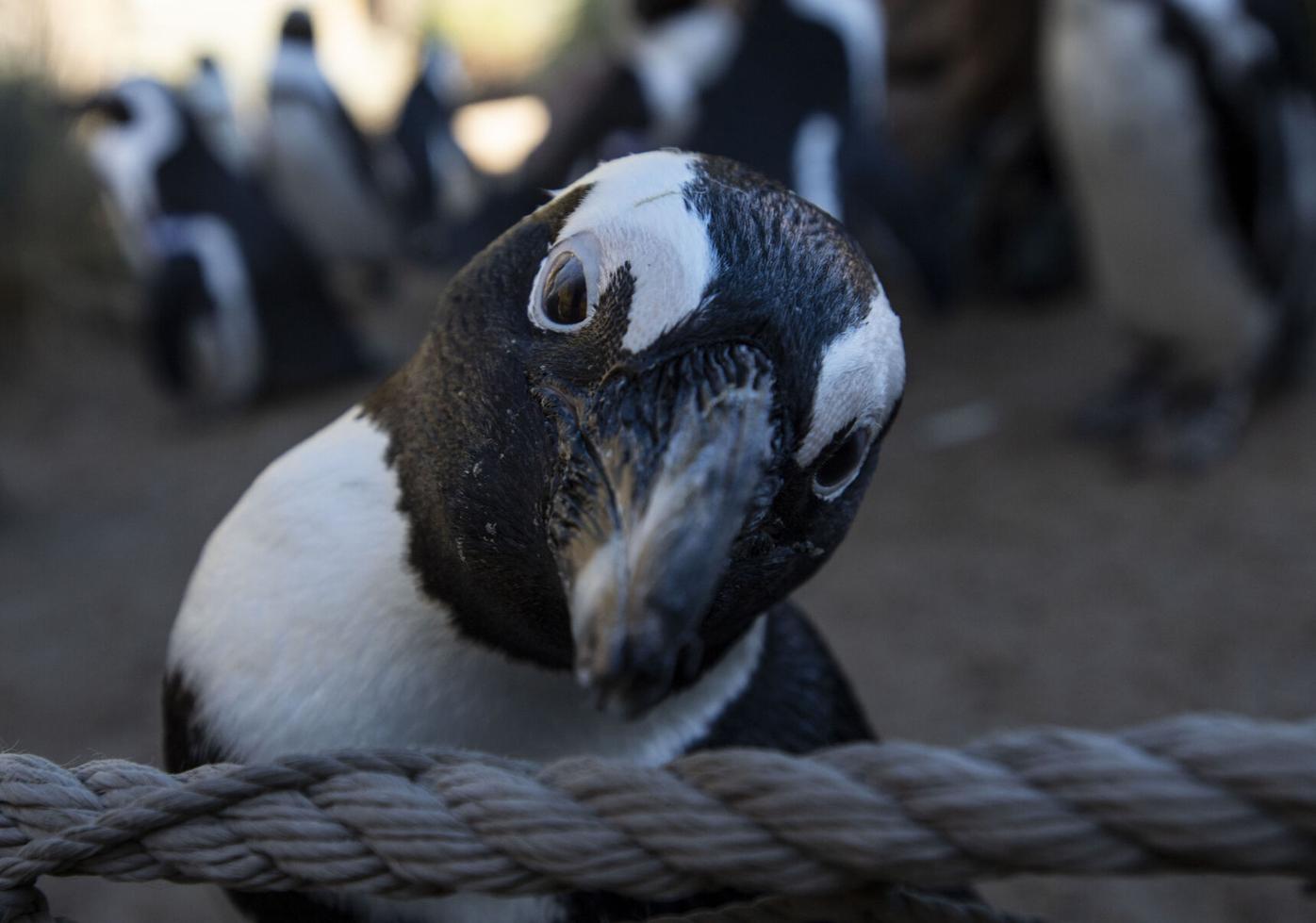 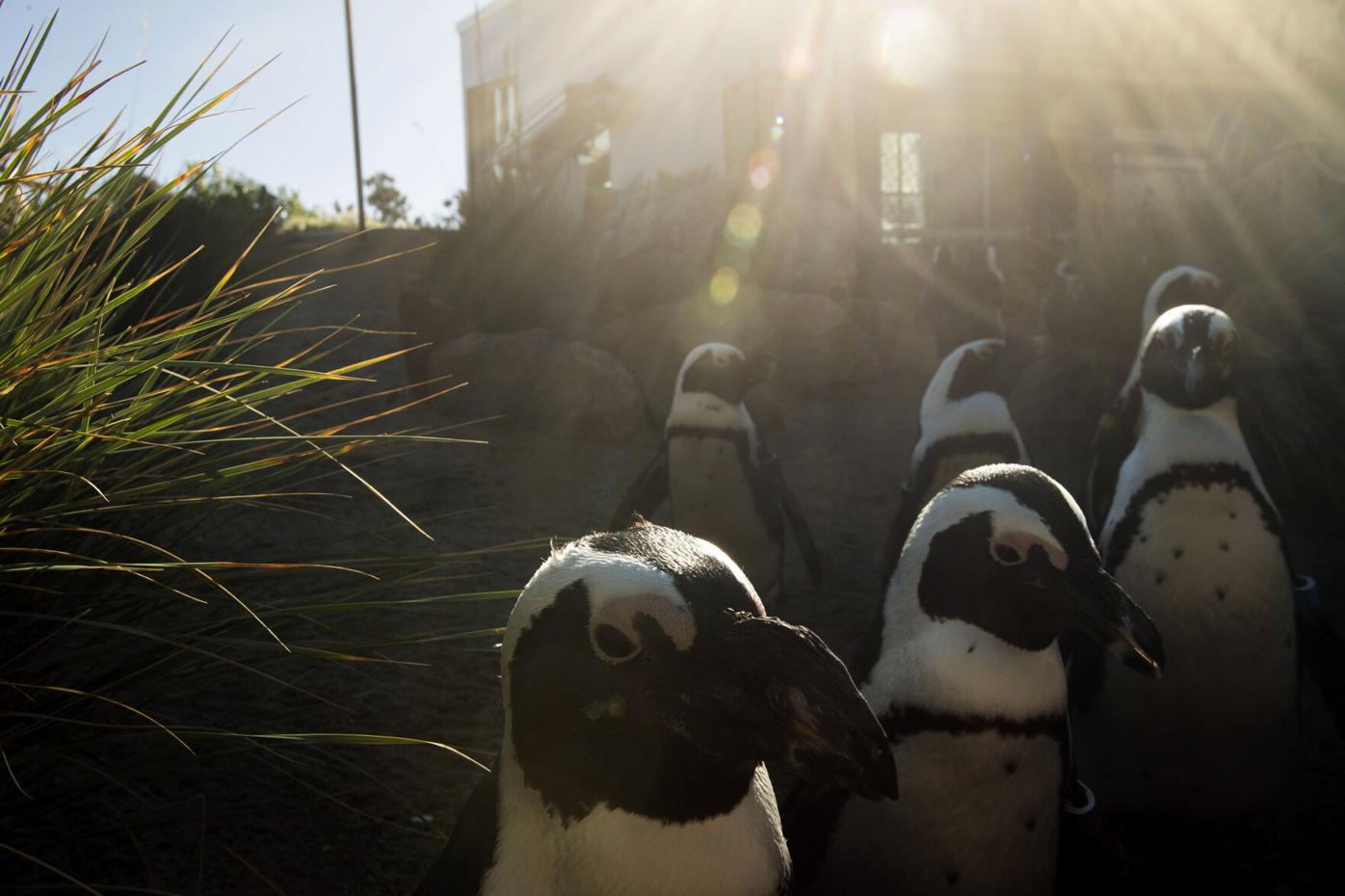 African penguins at the Cheyenne Mountain Zoo. “There’s always something going on between them socially,” animal keeper Al Carrier says. 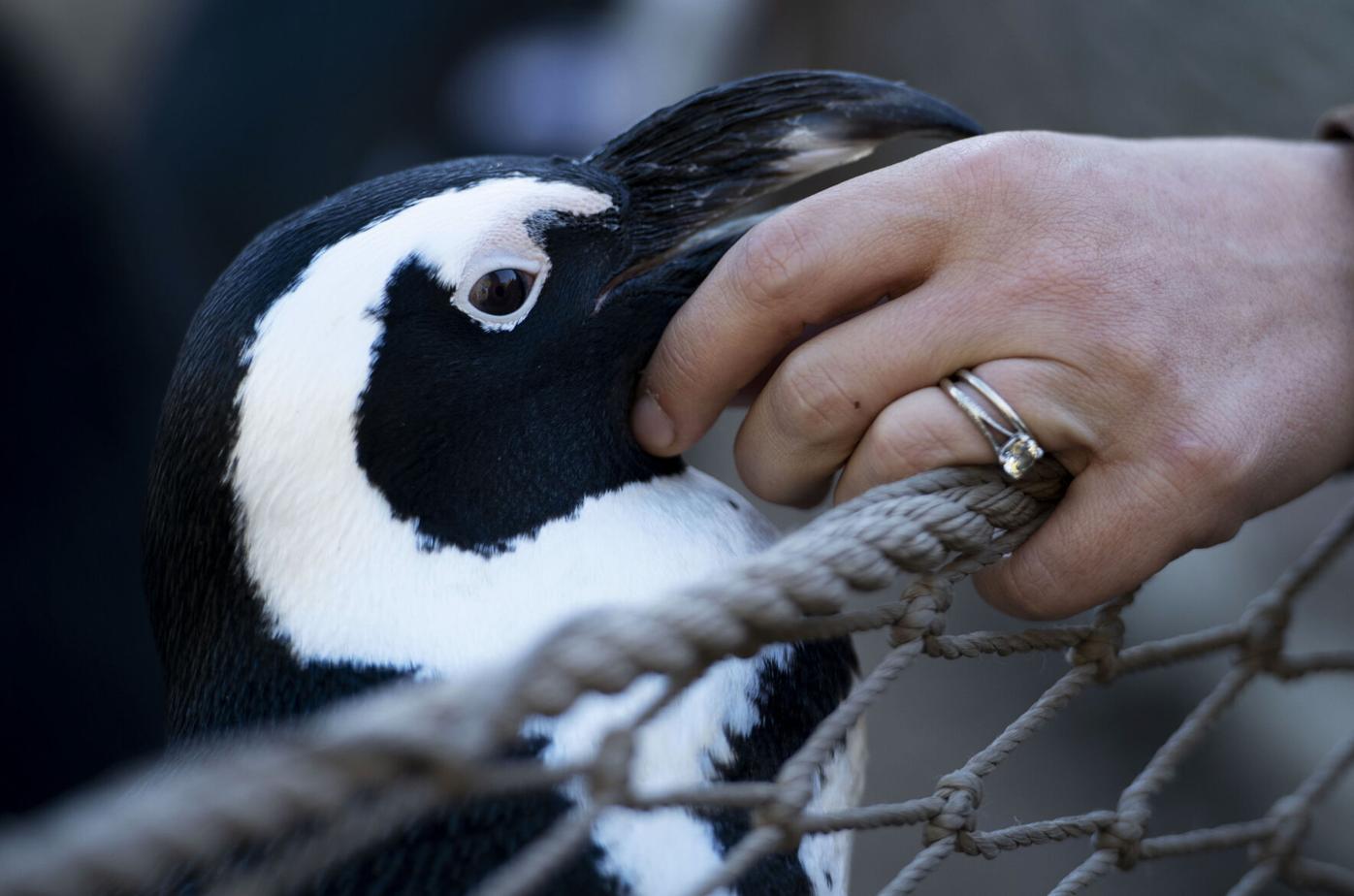 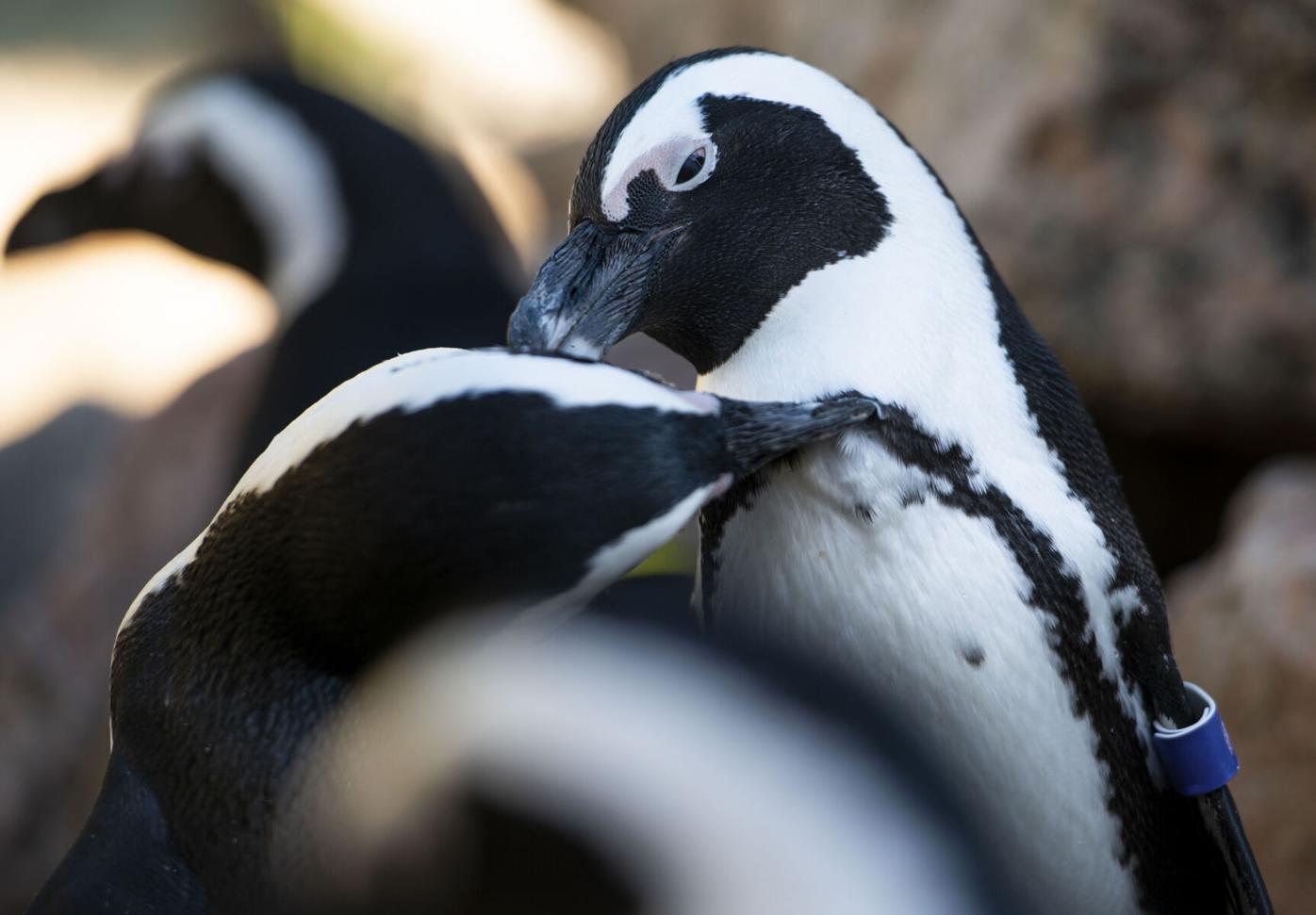 African penguins Biggs and Percy groom each other at the Cheyenne Mountain Zoo early this month. 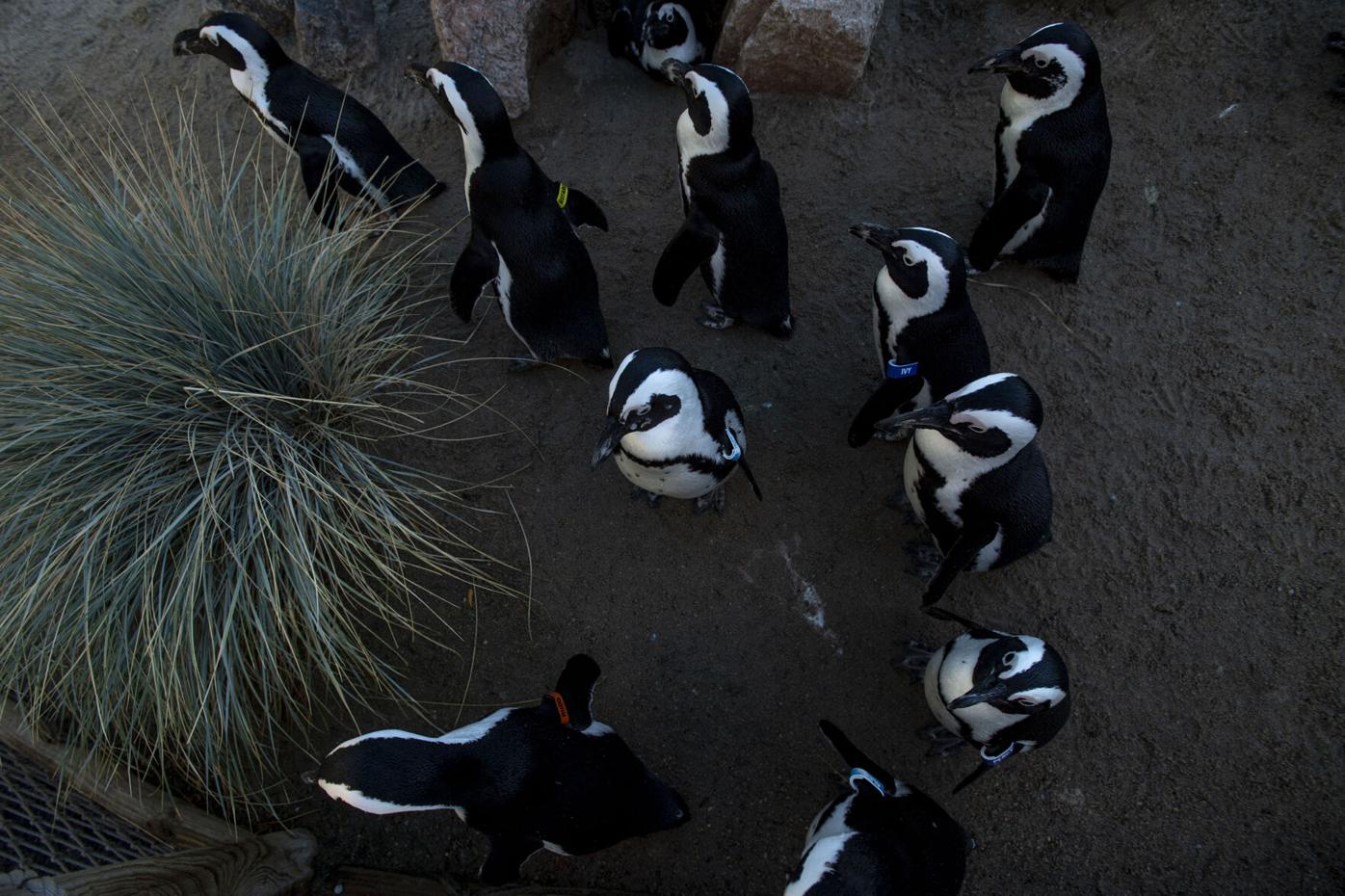 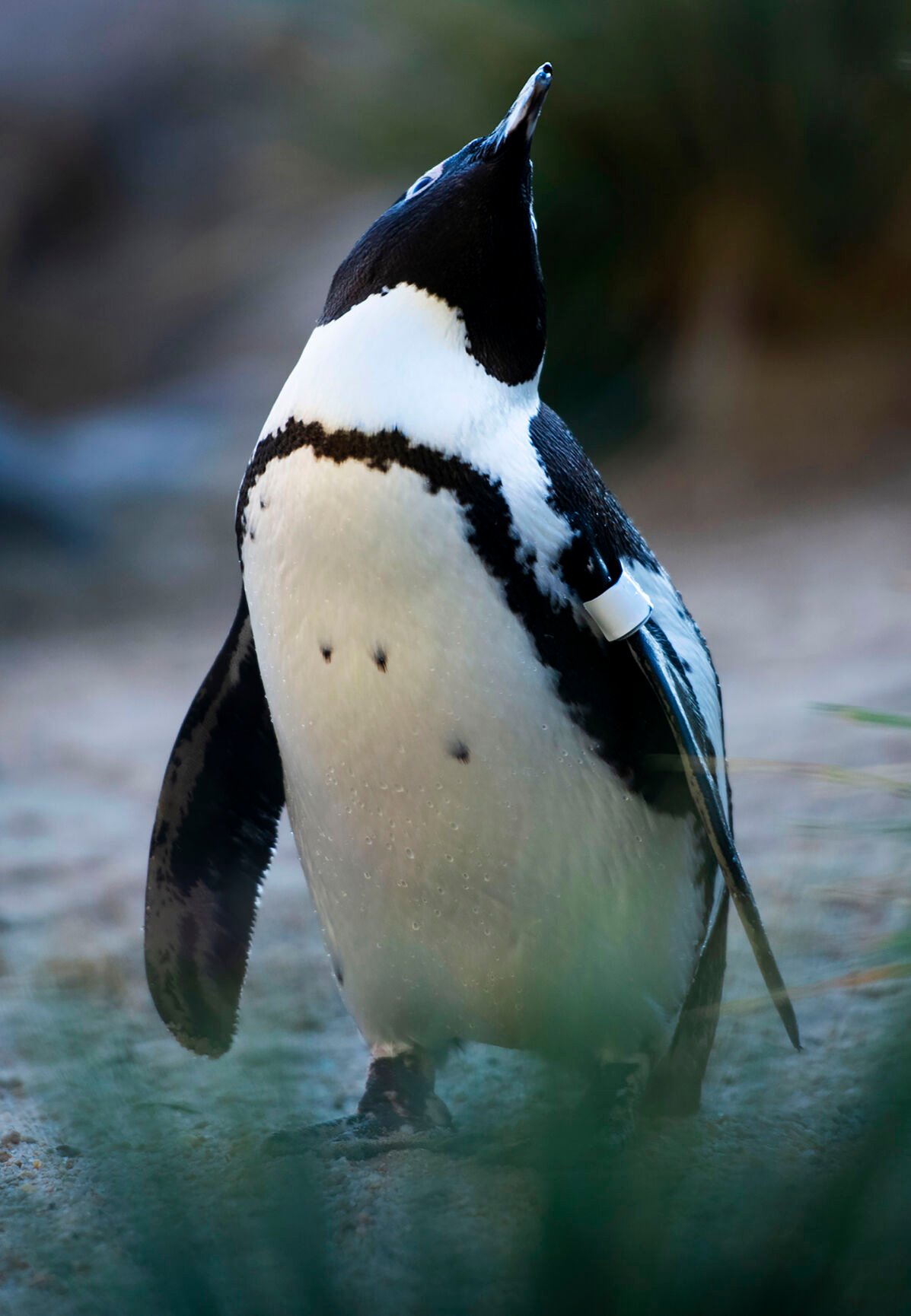 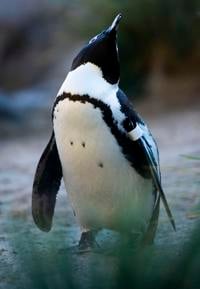 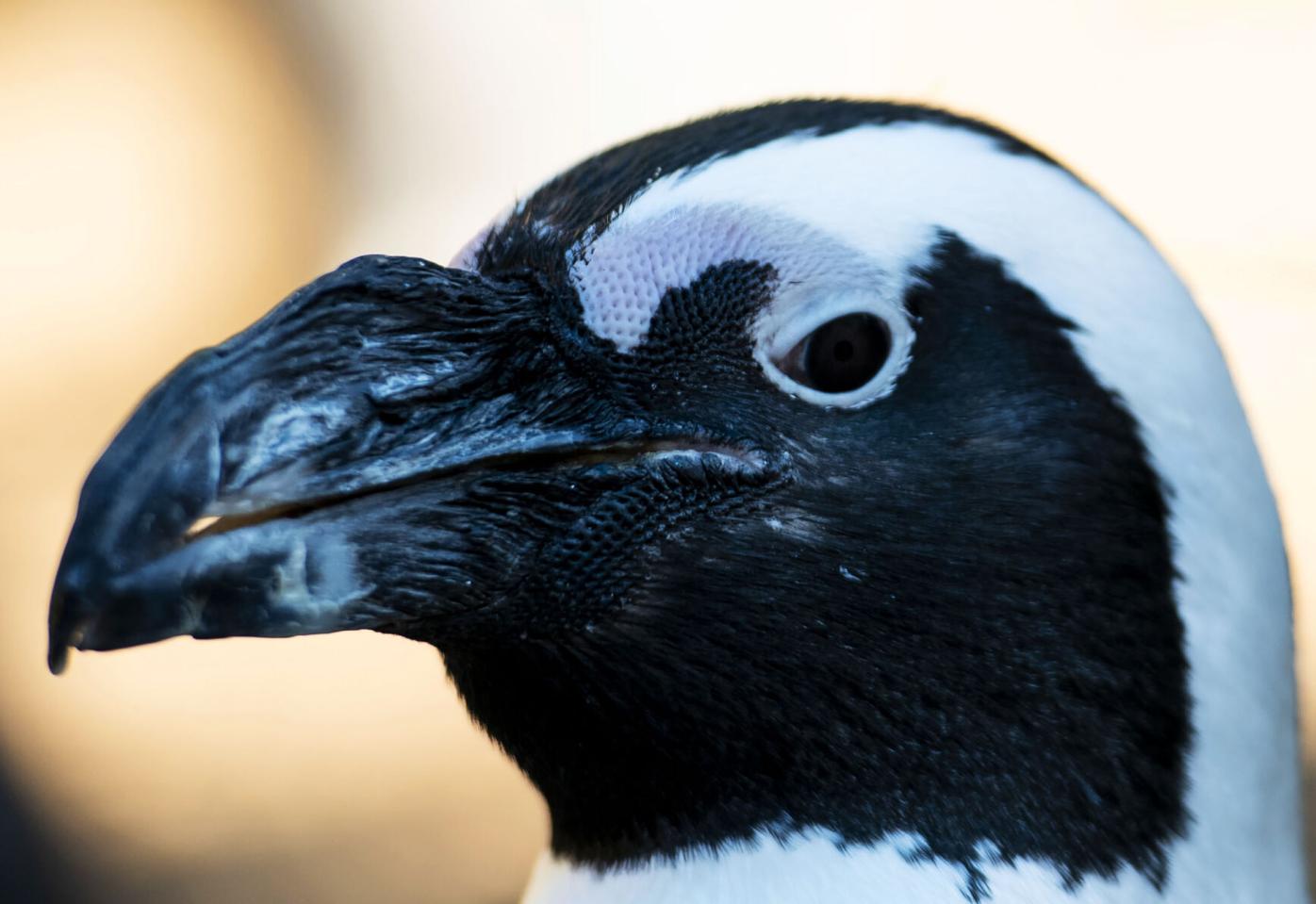 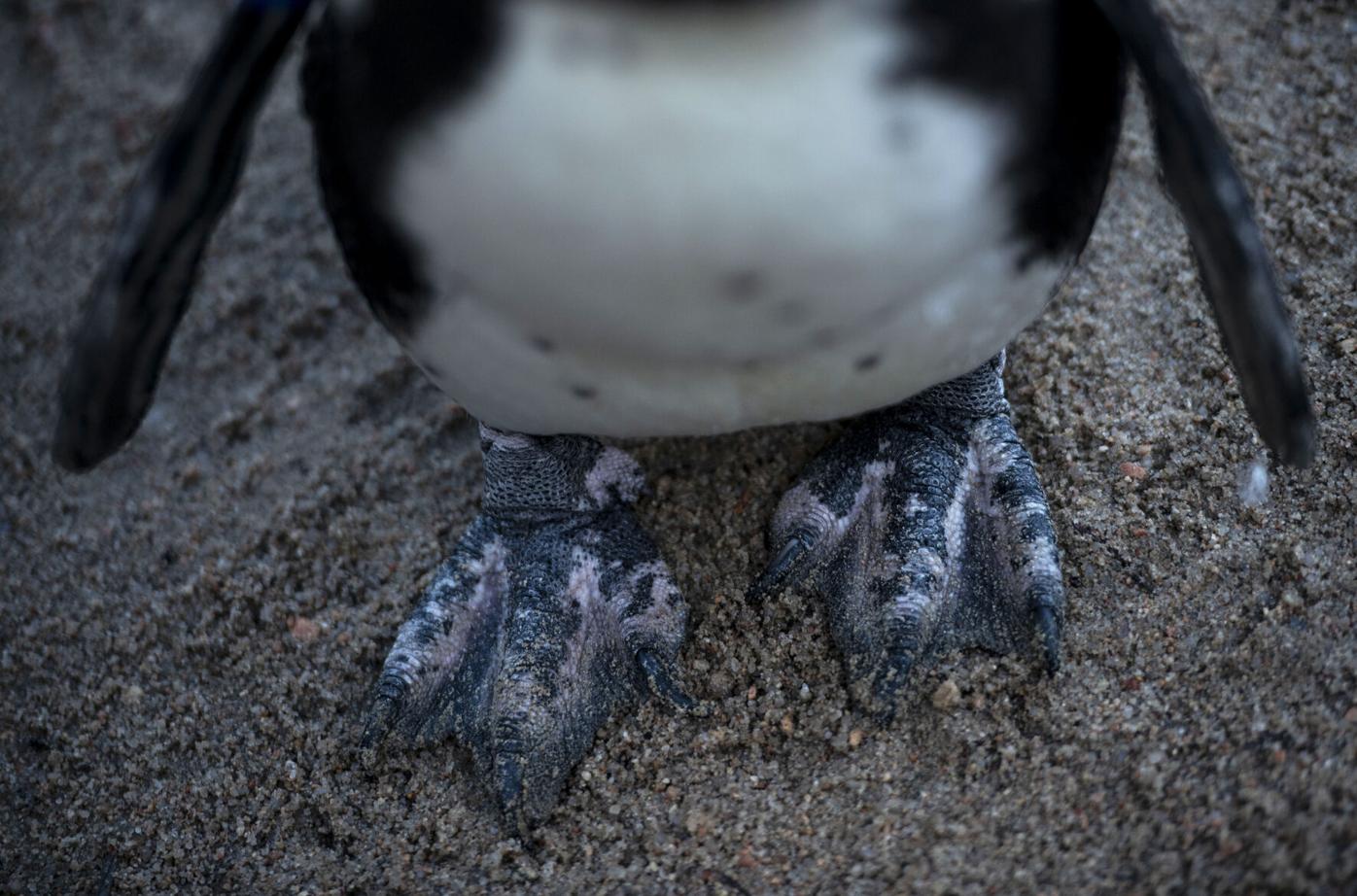 The webbed feed of an African penguin at Cheyenne Mountain Zoo in Colorado Springs on Oct. 6 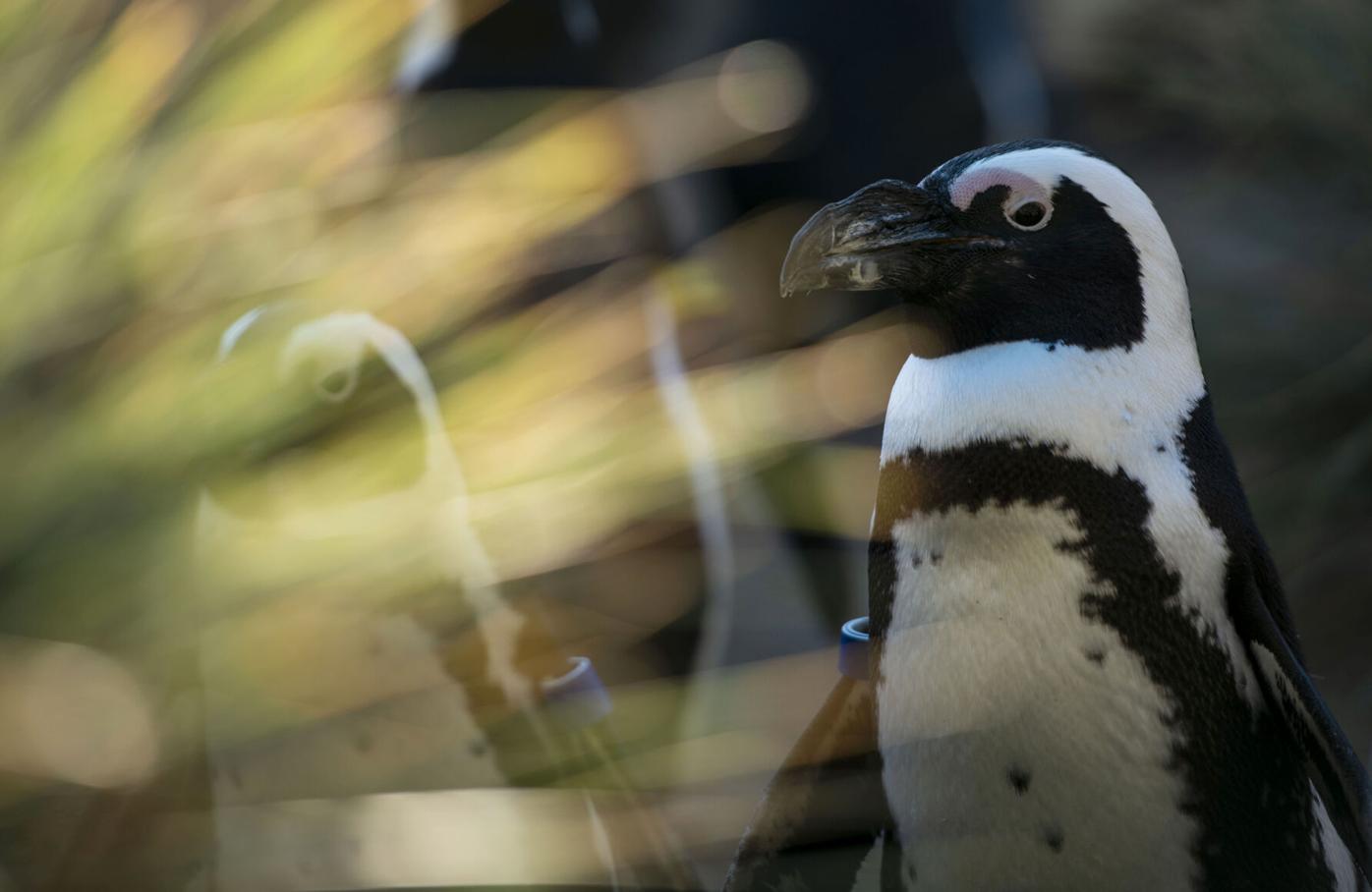 African penguins Biggs and Percy groom each other at the Cheyenne Mountain Zoo early this month.

These are the days of our African penguin lives.

When animal keeper Al Carrier shows up to Boulders Beach, in the Waters Edge: Africa exhibit at Cheyenne Mountain Zoo, every morning, she’s never quite sure what to expect from the 16 waddling tykes wearing miniature tuxedoes.

Take, for instance, the perfectly named Napoleon. Little guy, big personality. He’s a bit of an “aggressive friend,” Carrier said, which is probably why he got dumped by his former partner, Pearl, who jumped ship for a more placid penguin named Captain.

Penguins typically mate for life, so until Napoleon finds a new lady friend, which keepers believe can still happen, he’s found the next best option: Carrier. He devotedly follows her wherever she goes, and nibbles on her as she scratches his feathers.

“That’s him preening me as a sign of affection. And I can come in and preen him,” she said. “This is what two penguins would do to each other. It helps get their oils out and their feathers all lined up or anything off their feathers that they need groomed off. I like to give him some sort of attention, just because he doesn’t have that penguin friend to do that with him.”

Get this penguin a sweater

While some types of penguins thrive on the frozen tundra of Antarctica, African penguins are made for warmer climes. When it’s a snowy Colorado day, they might toddle around outside for a bit, but will quickly retreat to their heated pool, which stays above 55 degrees all year. “We say they have their own little spa,” Carrier said.

Every year penguins go through a catastrophic molt, usually during spring, when all their feathers fall off and they grow back a new set. It’s a necessary, though debilitating process, as their feathers are waterproof, and they need to replace them to sustain that weatherproofing ability. It takes about a week to lose the feathers, and about two weeks to grow them back. In the wild, they’ll fatten themselves up because they’re not waterproof and can’t swim and catch fish while they’re molting. The process also leaves them susceptible to predators, so they usually hide, which could mean another penguin gleans his opportunity and tries to take over and become the dominant guy.

Fish is always on the menu. They get three varieties: smelt, which keepers call french fries because penguins can eat 20 of them in one sitting; capelin, the next size up; and herring, the biggest fish. Jagged tongues help them swallow their meals. But it’s not as easy as passing out fish to these penguins. Each one has a different eating preference. Some only like capelin, others only like herring presented to them in a particular way. Biggs only eats his fish backwards, while Alex practically gags at the site of capelin before walking away, never to return.

“You have to get to know them on a personal level in order to feed them properly, because they’re pretty picky,” Carrier said.

As far as special snacks go, it’s hard to treat a penguin. During training sessions, some penguins will do anything for more of that delicious smelt, while other treats are much more tactile. Some penguins, including Napoleon, better appreciate physical affection in the form of neck scratches for a job well done. Others, such as Captain, like toys — little balls, in particular.

Each penguin has its own definition of a day well-lived. Roxy would swim all day, if she could, and prefers to take her meals while soaking. Others, such as Rudo and Napoleon, crave the public’s attention, interspersed with chasing reflections or bugs. Some bonded pairs are all about spending quality time together, and hide in little caves strategically placed around the beach. And let it be said — there’s always fish involved in a penguin’s best day.

Chicks in the works?

There are two recommended breeding pairs, one of which did lay an egg. Much like chickens, the penguins sat on the egg and incubated it for awhile, but keepers determined there was no viable fetus. They remain hopeful, though, and have given the pair their own area to get down to breeding business, away from the kindergarten classroom, so they don’t have to deal with all the social stuff of being a penguin.

What people saw Monday afternoon at Garden of the Gods was a woman walking a big bird on a leash.

Large and in charge: Meet the hippos at Cheyenne Mountain Zoo