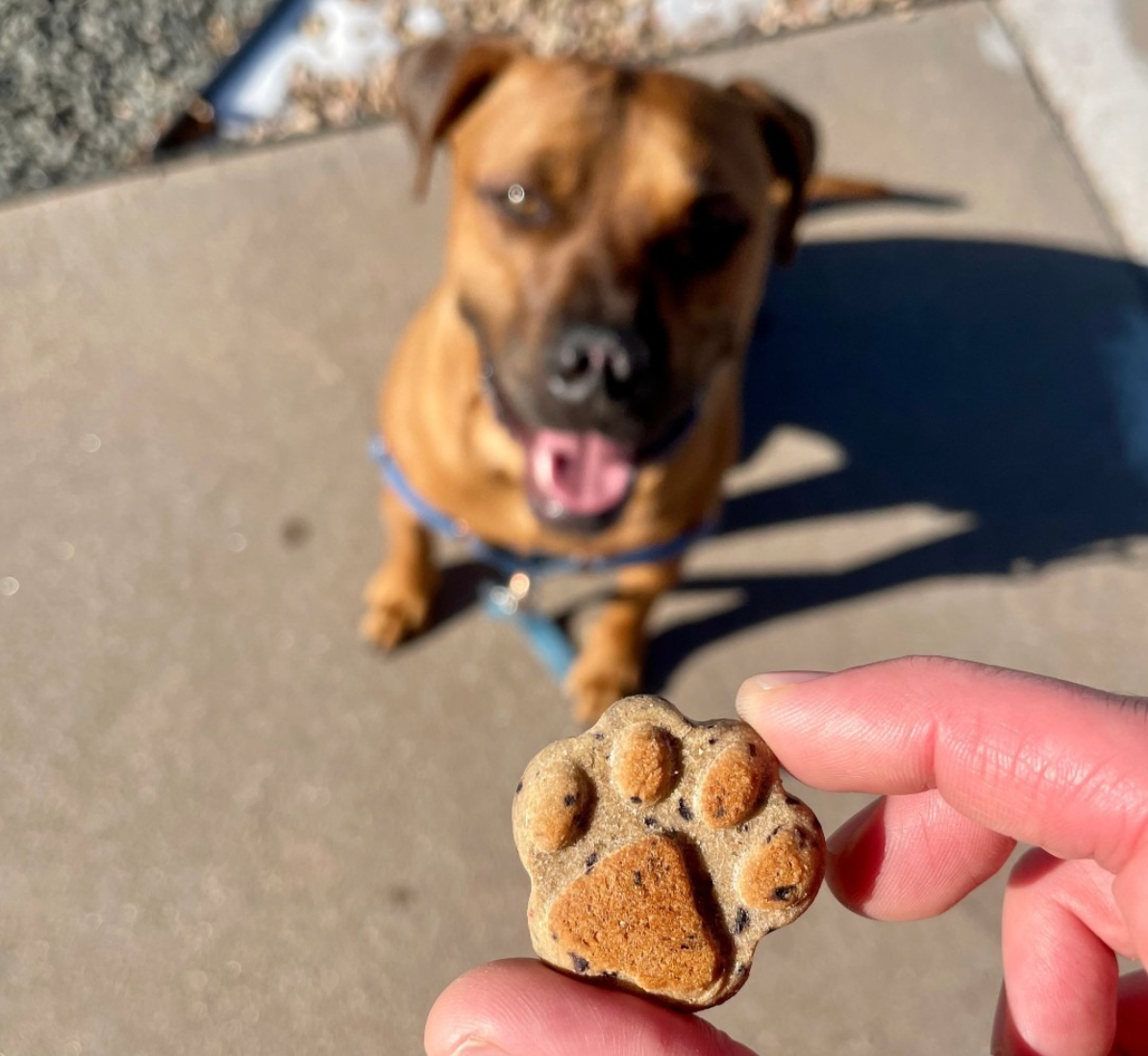 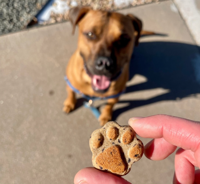 Grizzly the dog waits for a Snuggles Snacks treat. 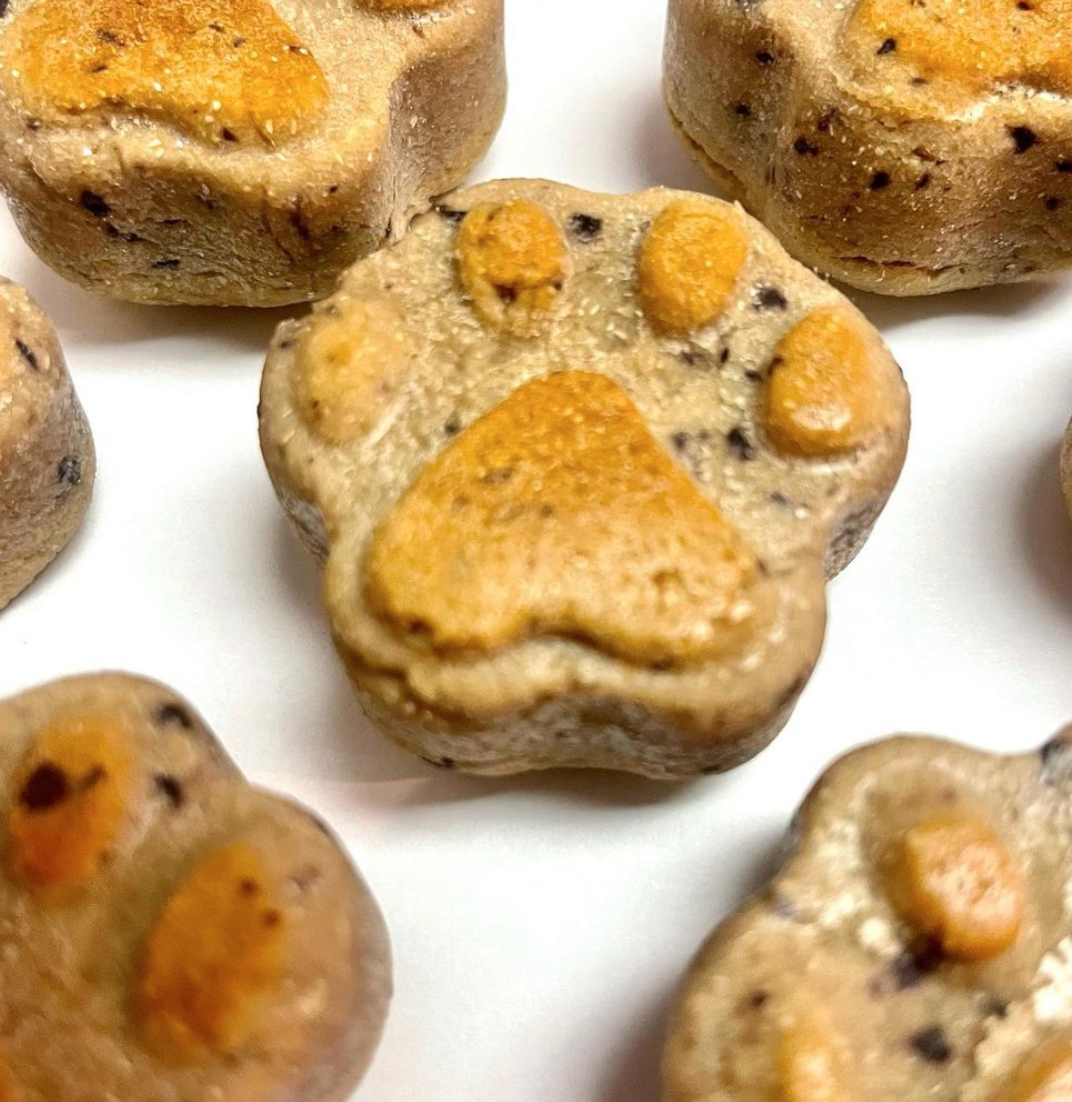 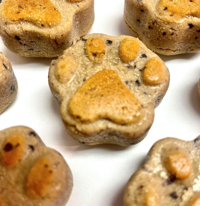 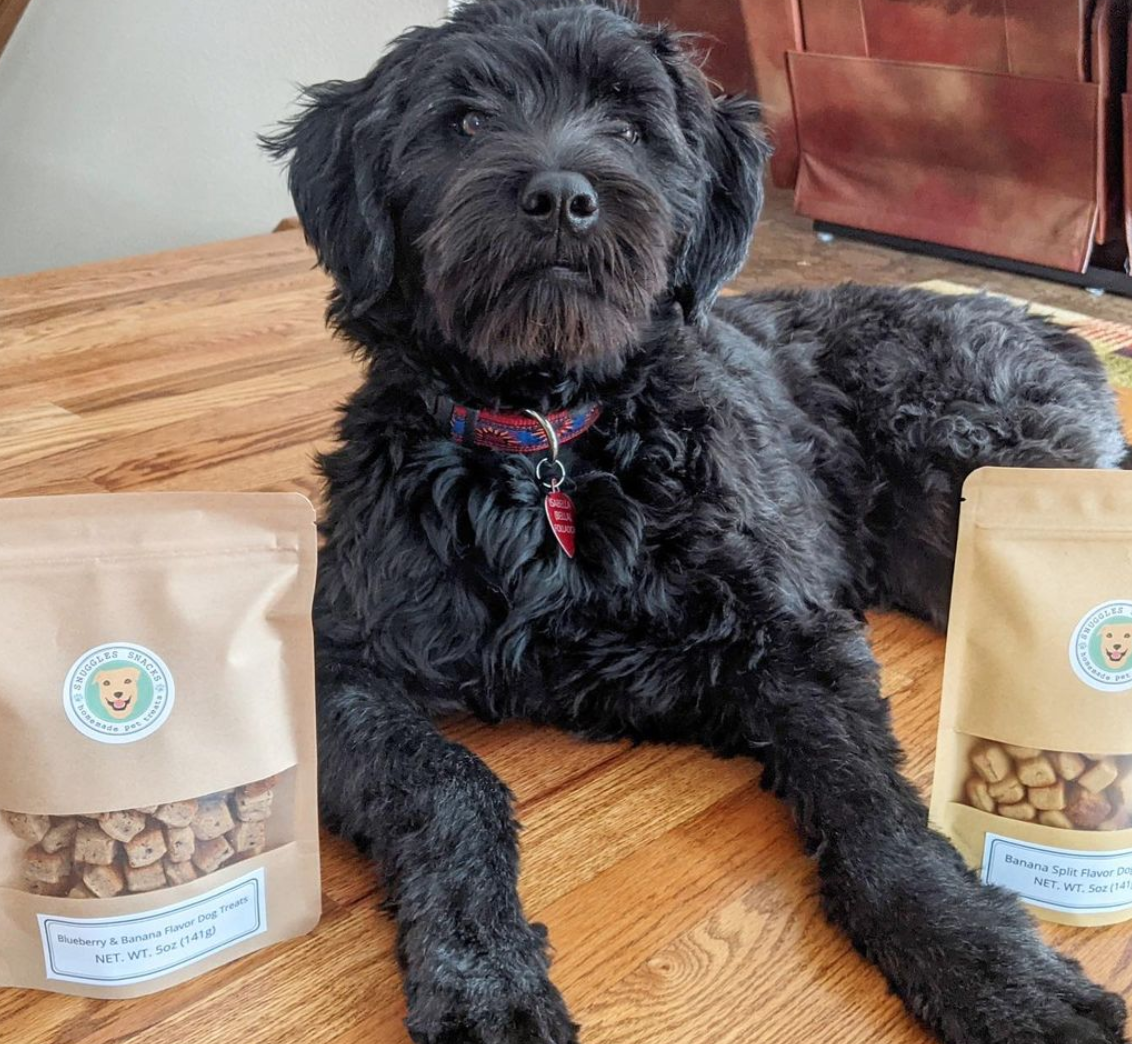 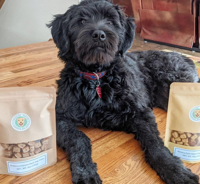 One of Jenny Porter's canine customers poses with some Snuggles Snacks. 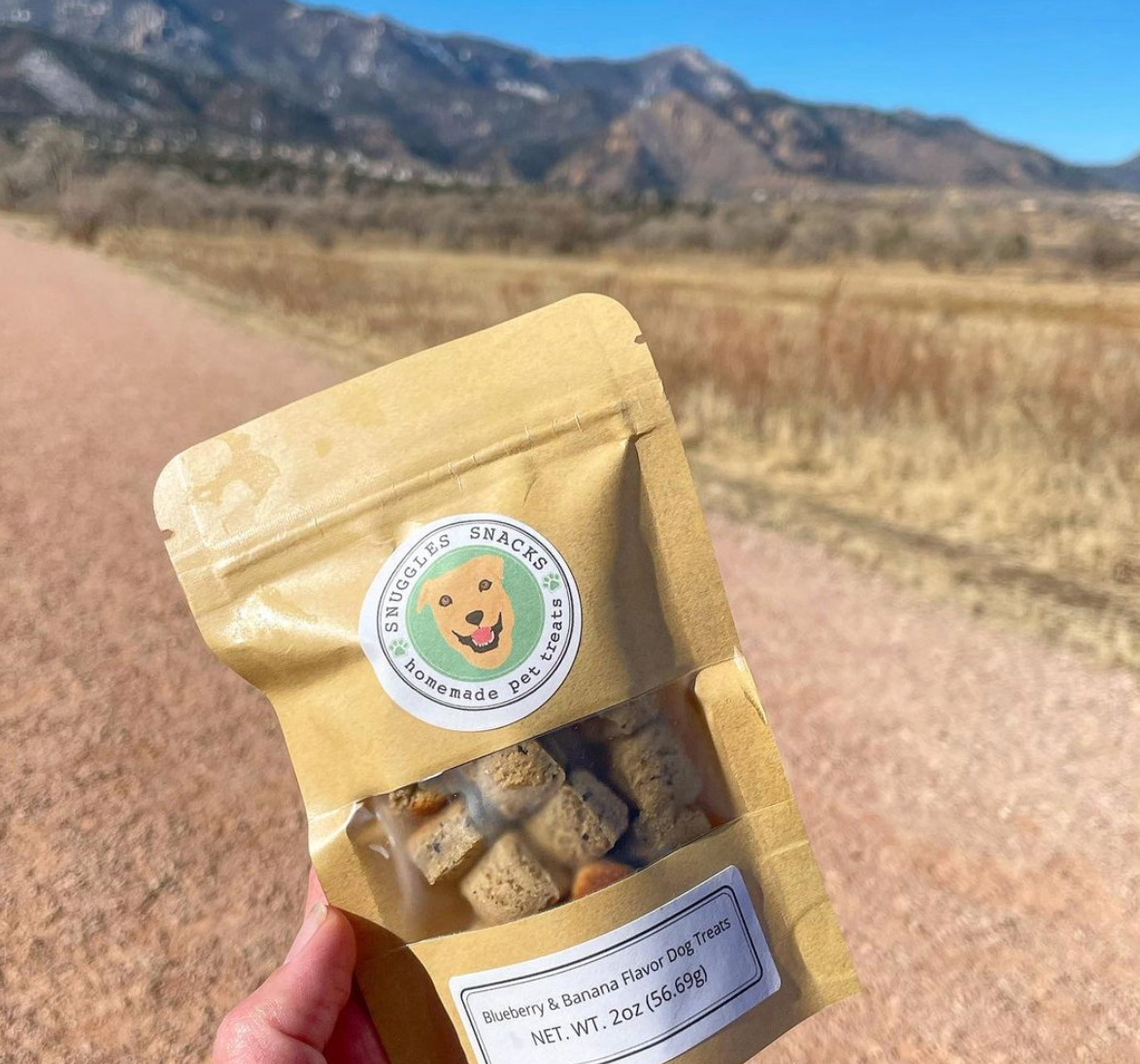 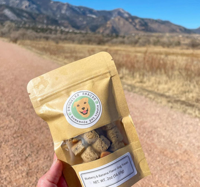 Snuggle Snacks is a brand of dog treats made in Colorado Springs. 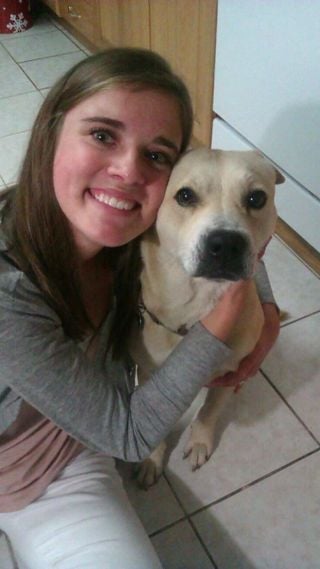 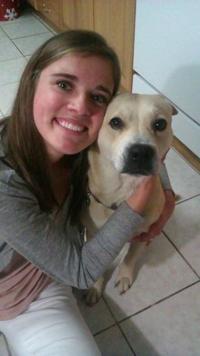 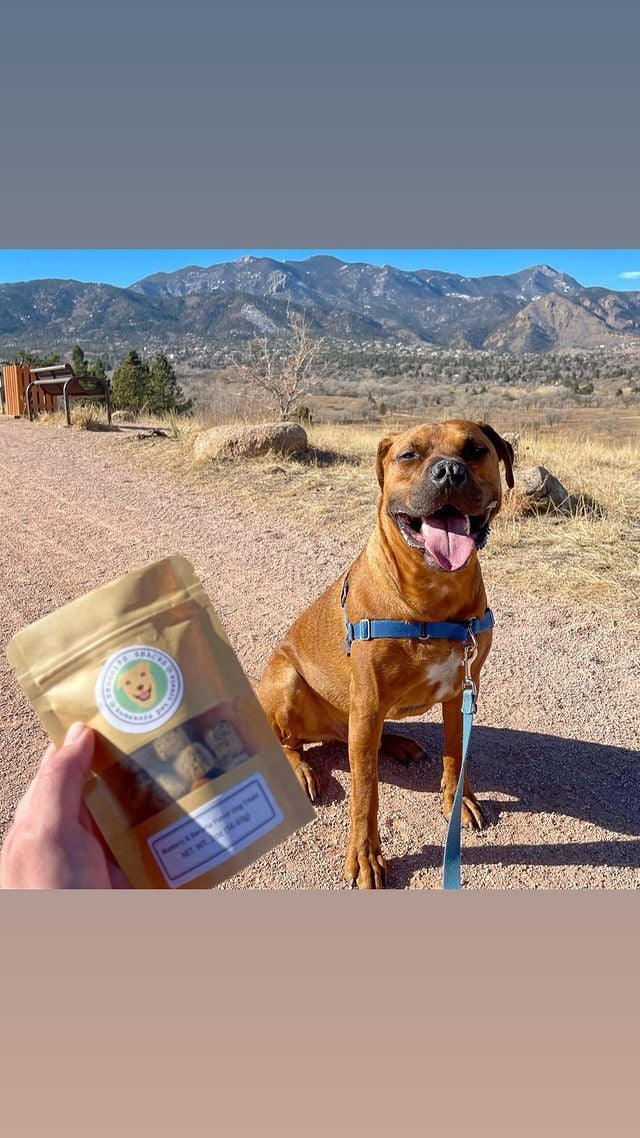 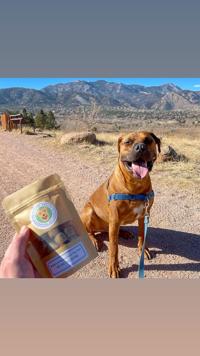 Grizzly the dog waits for a Snuggles Snacks treat.

One of Jenny Porter's canine customers poses with some Snuggles Snacks.

Snuggle Snacks is a brand of dog treats made in Colorado Springs.

For almost half of Jenny Porter’s life, Snuggles was always there.

Porter, who is 28, got the white-haired pit bull-Lab for her 13th birthday. She says the pup helped her get through middle school and high school. Porter didn’t bring Snuggles when she left Texas for West Virginia University. One semester in, though, she missed Snuggles too much. So the dog went to college, too.

Snuggles, of course, came along when Porter and her boyfriend moved to Colorado Springs four years ago. Then it was their turn to take care of Snuggles. Porter treated her four-legged best friend with CBD oil and acupuncture for two years while the dog’s spine slowly deteriorated.

Snuggles died, or “crossed the rainbow bridge,” as Porter likes to say, in January 2020.

Porter promised to carry on the memory of Snuggles, who taught Porter to have such a big heart for animals. And that meant bringing a new dog home. In April, she and her boyfriend adopted a pit bull puppy named Grizzly from the Humane Society of the Pikes Peak Region in Pueblo.

And Grizzly seemed to hate treats. Porter tried to use treats to train him, but he showed no interest.

“I figured out that he has the most sensitive stomach ever,” Porter says.

The avid baker started experimenting in the kitchen, making dog treats from a handful of ingredients. When she wasn’t tending bar at The Broadmoor, she loved trying out different types of flour and flavors. She knew she wanted the treats to be all-natural and gluten free.

“He’s obsessed with them,” Porter says.

Other dogs were, too. Porter gave some treats out to her friends with pups and got rave reviews.

That’s when she started thinking she should make it into a business. The name came to her quickly: Snuggles Snacks.

She officially launched Snuggles Snacks on the first day of 2021 with a website (snugglessnacks.com) allowing people from across the country to buy “bake-to-order” homemade dog treats.

As soon as an order comes through, Porter makes a batch of paw- or bone-shaped treats to be shipped or, if based in Colorado Springs, delivered. The fresh treats have a shelf life of only 12 days ,so she makes sure the process is speedy. They last longer in the fridge or freezer.

As of now, Porter sells three flavors, including peanut butter, blueberry and banana and banana split. Each one is made with just four ingredients. The peanut butter treats, for example, have organic brown rice flour, pumpkin, natural creamy peanut butter and cage- free eggs. “Dogs should eat as healthy as we do,” Porter says. “Knowing I’m giving dogs healthy food makes me happy.”

Each bag, which cost $10 for 5 ounces, is adorned with a cartoon version of Snuggles’ face. On the website, Porter describes the business’s namesake as “truly the best dog we could have ever asked for.”

Contest brings in votes for the favorite dogs or cats.