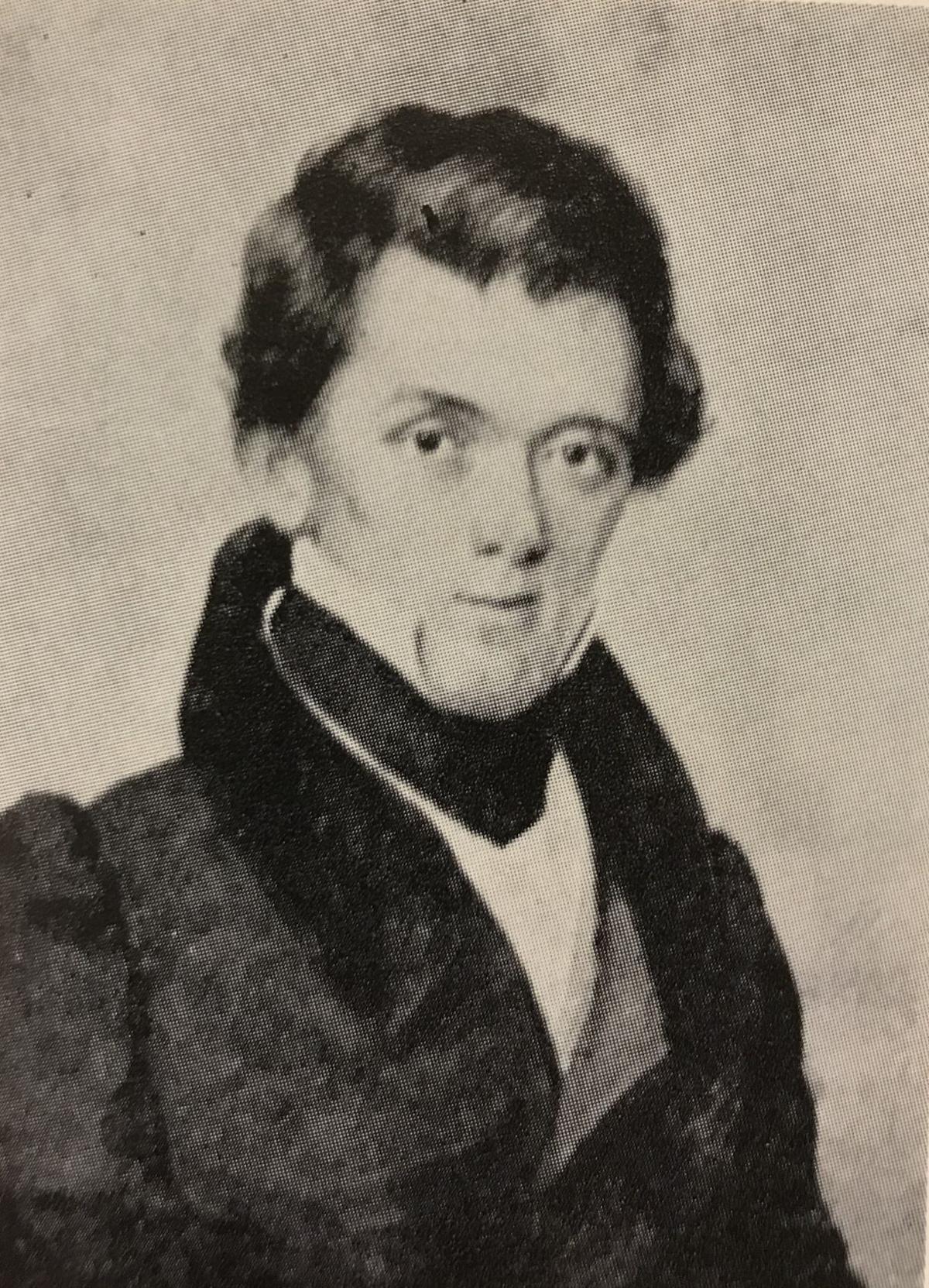 This portrait of Edwin James by Samuel Seymour is the only rendering of the explorer known to exist. He’s the first man credited with climbing Pikes Peak. 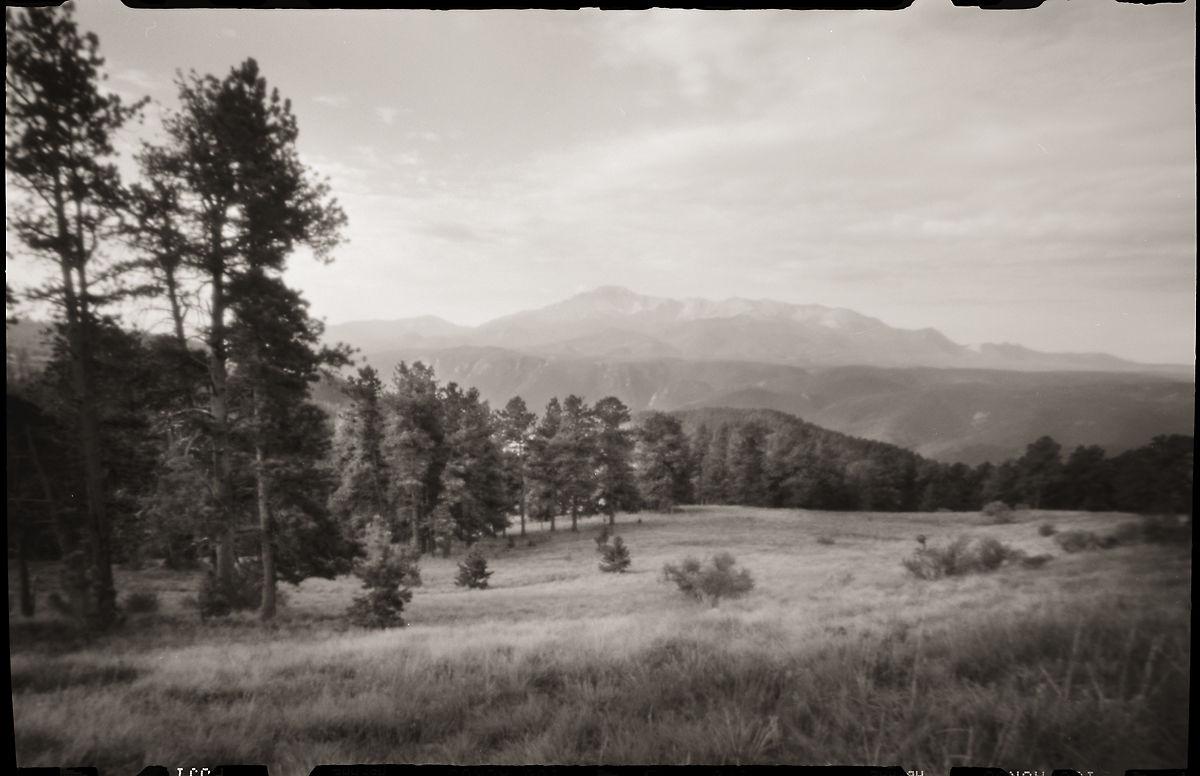 Pikes Peak over the fields, as captured by Mark James, who practices pinhole photography. The descendant of Edwin James is bringing to light the story of the first person recorded to summit Pikes Peak in 1820. 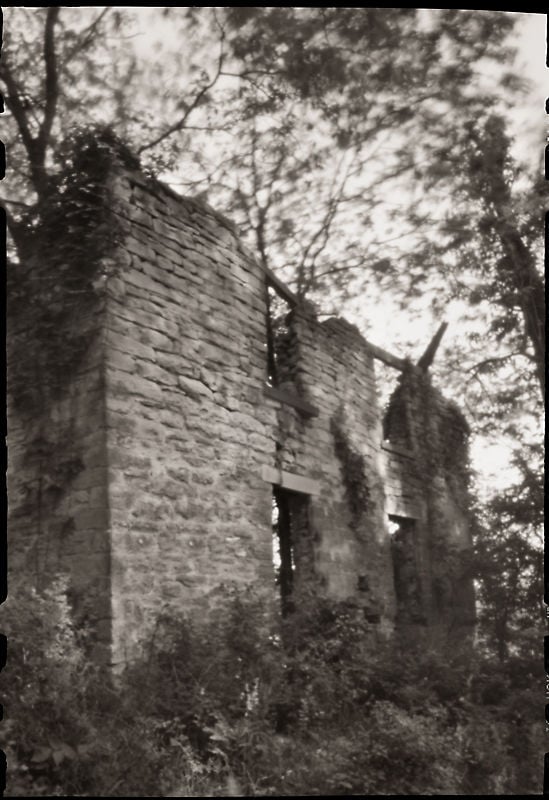 Remains of Edwin James’ homestead in Iowa, as captured through a pinhole lens by Mark James. The descendant of the first person credited for climbing Pikes Peak is bringing to light the widely unknown story of the man.

This portrait of Edwin James by Samuel Seymour is the only rendering of the explorer known to exist. He’s the first man credited with climbing Pikes Peak.

Remains of Edwin James’ homestead in Iowa, as captured through a pinhole lens by Mark James. The descendant of the first person credited for climbing Pikes Peak is bringing to light the widely unknown story of the man.

One day, Mark James got a Pikes Peak postcard from his father.

“I didn’t think much of it,” James recalls. “He said, ‘Well, what do you think of that?’ And I said something like, ‘Yep, that’s a mountain. That’s Pikes Peak.’

“That’s when he told me my ancestor was the first to climb it.”

Edwin James is indeed the first man credited with scaling the 14,115-foot mountain we now know as America’s Mountain. We know it to be named for Zebulon Montgomery Pike, of course — the young general who never actually reached the peak in an expedition riddled with roundabouts and capture. He described the summit as unattainable in a widely popular journal published in 1810.

But 10 years later came Edwin James, who at 23 had a place in Major Long’s party as a physician but who seemed more interested in adventure and botany. James reportedly ascended the peak and returned to camp as ordered over the span of three days in July 1820. We can read all about it in his lengthy account kept by the Library of Congress.

For more on Edwin James, we have digitized papers from the State Historical Society of Iowa. Otherwise, we’re hard-pressed. Good luck finding much in Colorado Springs libraries and museums.

“With a guy who accomplished so much, how did he end up so obscure in history?” Mark James wonders from his home near Fort Collins. “That’s a big part of the story.”

And that’s a big reason for the descendant’s mission to bring the story to light approaching the bicentennial anniversary of the climb. A professional photographer and amateur historian, Mark, 64, has spent three years amassing notes, letters and other wrinkled documents to tell the story of his great-great-great-great-uncle in a way that’s never been done.

He’s planning a book and scheduling speaking engagements. One is set for July 27 at Bear Creek Nature Center.

To be sure, this has nothing to do with the naming of the peak, which swayed in Pike’s favor sometime later in the 1800s. “It’s Pikes Peak,” Mark says. “What I’m interested in is telling the story of this guy who did a lot in his lifetime.”

The legacy is more than the mountain. Mark has thick binders of material that paint the picture of a man ahead of his time.

From what Mark can tell, Edwin identified hundreds of native flowers and feared they would be trampled by the West’s incoming civilization. Just as he feared what would happen to the buffalo. He wrote of his hope “that the wanton destruction of these animals, by the white hunters, might be checked or prevented.”

And he lived long enough, 64 years, for his fears to be realized. “The locomotive engine and railroad car scour the plain in place of the wolf and curlew,” he wrote.

Edwin’s altruism extended later to fleeing slaves. At his homestead in Iowa, where he raised a family and spent his final years, he sheltered fugitives of the Underground Railroad.

“He was a great abolitionist and thought slavery a sin against God,” wrote his daughter, Fannie James Bissell. She described her father as a mainstream detractor with crumbled faith: He “became dissatisfied with churches generally, for infidelity to humanity and justice on the slavery question, which he attributed to them.”

He aligned early in his life, the youngest of a deacon in Vermont. Wooded hills rose in the backyard of their log house, while out front a valley splayed far and wide, Middlebury in view. Edwin James was known to walk 5 miles to that town’s college, where he graduated in 1816.

Clearly, he took traits of his father, whom another son described as “a studious and thoughtful man” and “accustomed to cull treasures of rich thought from works of nature and a wide range of readings.”

How else to describe Edwin James’ ascent of Pikes Peak? He thought of turning back several times, but then his curiosity took him to some new flower and their “peculiar brilliancy of colouring,” as he wrote. Or to some new rock, “crystals of feldspar, of a pea-green colour” and “transparent, white and smoky quartz.” Or to some new animal, a squirrel like he’d seen elsewhere, but these were “shorter and more clumsily built.”

He delighted in tracks that were not of a deer, but of the bighorn creatures in these high realms. And he delighted in the grasshoppers — “as the sun shone brightly, they could be seen by the glittering of their wings.”

At the summit, he marveled at “the great plain, rising as it receded, until in the distant horizon it appeared to mingle with the sky.”

In a 1962 remembrance, the late historian Louisa Ward Arps asserts that his was the earliest recorded climb of a 14,000-foot mountain in Colorado and probably the country. “Neither he nor his contemporaries seemed to consider the scientific observation of the above-timberline world to be distinction enough for any man,” Ward Arps wrote.

In Mark James' view, Edwin James faded into obscurity largely because of Edwin James. “He just didn’t concern himself (with) making his name in history,” the descendant says. “He just wanted to accomplish.”

It seems so in a letter Edwin penned to friend John Torrey, the namesake of another Colorado fourteener: “It did not take me long to discover that it was not for me to make my mark upon the age and having settled that point to my own satisfaction, I determined to make it on myself.”

But Edwin James’ name isn’t totally forgotten across the land. Look to James Peak, the 13,294-foot centerpiece of the James Peak Wilderness, hiding north of Interstate 70.

On a bluebird day last year, Mark James visited with his camera. He’s a rare practitioner of pinhole photography for how the old style captures landscapes just as he would have them: “very dreamy, ethereal,” he says. “Timeless.”

It works well with a rugged, unspoiled place like the James Peak Wilderness. It’s tougher to pull off with Pikes Peak.

“With Pikes Peak,” James says, “I’ve found I have to work really hard to find angles where the intrusion of civilization hasn’t hit.”