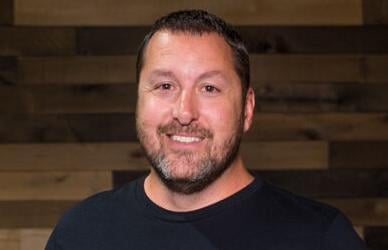 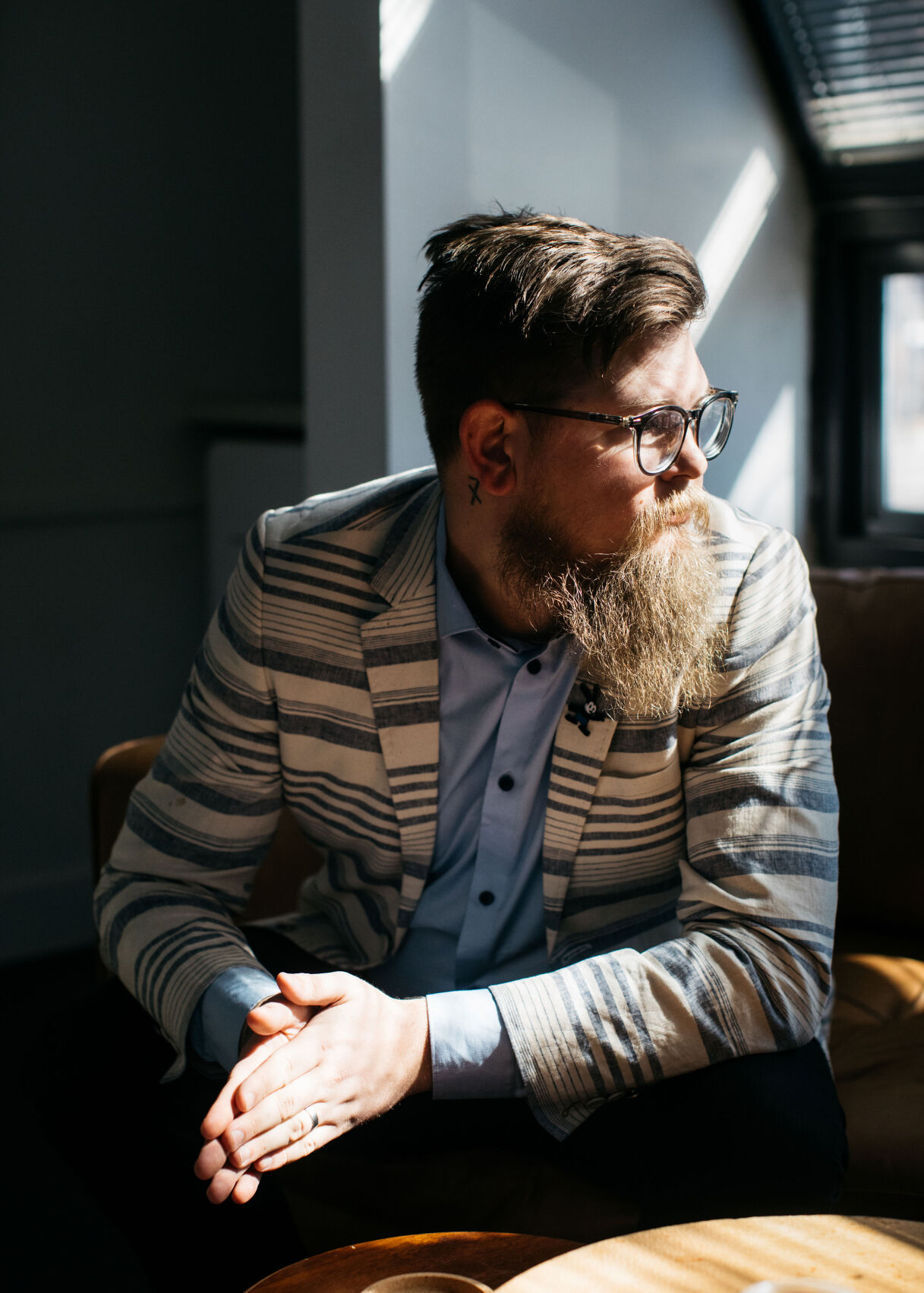 Tyler Hill is on staff at Sanctuary Church. 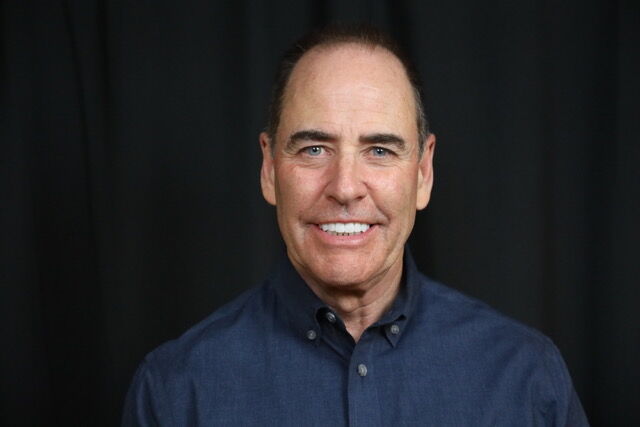 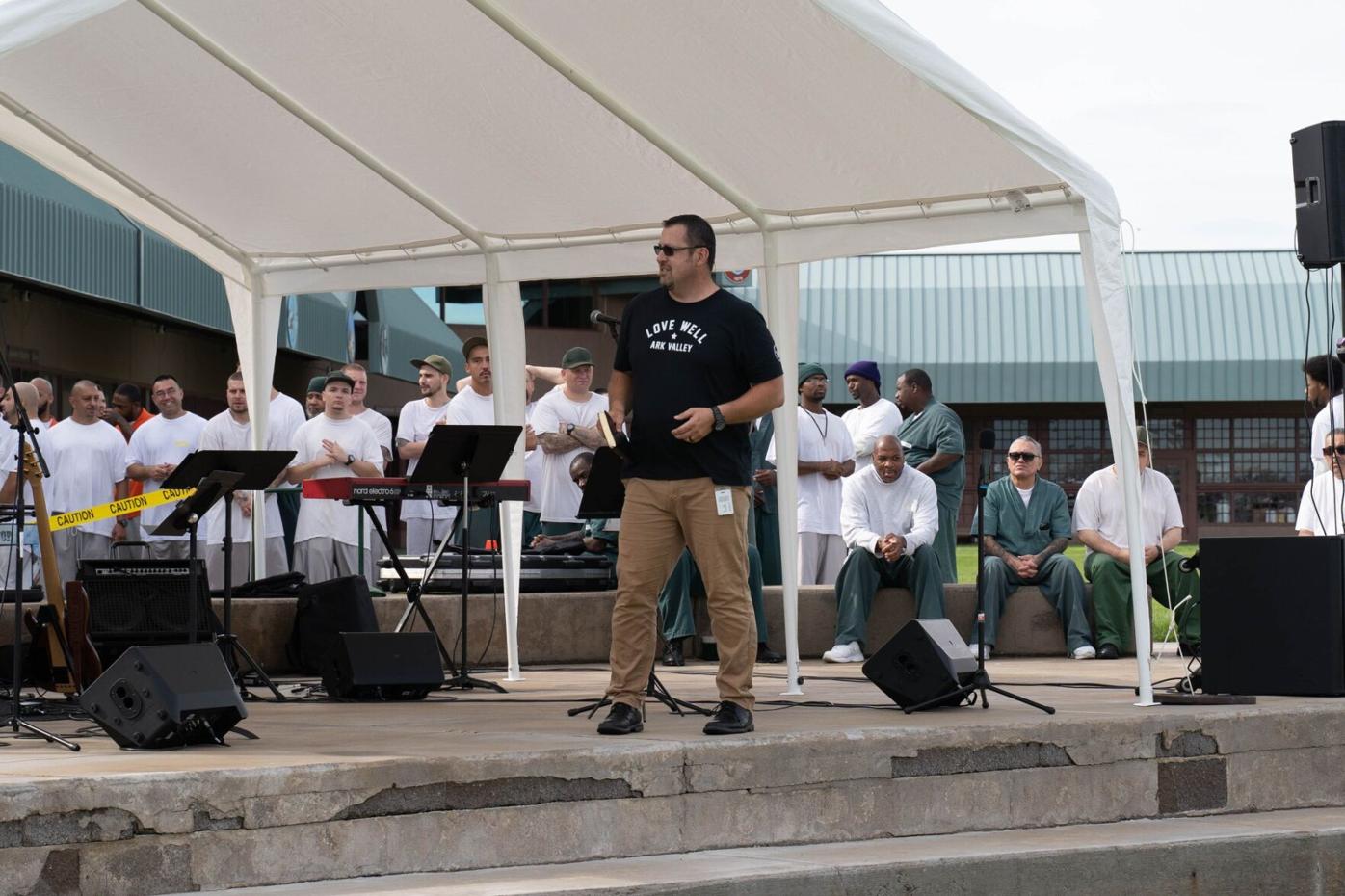 In 1990, Howie Close was an angry and violent 17-year-old Denver punk looking for fights. One night he beat up on a group of Japanese exchange students. New hate crime legislation mandated 75 years in Colorado prisons.

He started fights with fellow prisoners, landing him in solitary confinement, where he found an old, torn-up Bible stuffed underneath the toilet. Repeatedly reading the book “from noncover to noncover,” he would experience a powerful spiritual transformation.

“There was no crack in sky,” he says, “no moment of getting on my knees and confessing my sin. But I believed what that book was telling me. Prior to that, I enjoyed hurting people. Even if I lost fights, I loved the dopamine rush. That was my drug of choice. But after four months of me and that Bible, I was a different human being. I didn’t want to hurt people anymore.”

Gary Skinner illegally transferred funds between businesses he ran in Dayton, Ohio, in the 1980s, ripping off a friend and business partner for nearly $400,000. Convicted of aggravated theft and sentenced to four to 15 years in prison, he lost everything: career, family, home, cars, self-esteem and freedom.

Alone in his cell, he alternated between sorrowing over his sins and blaming his incarceration on his attorney, the judge in his case and the parole board that refused to lessen his sentence.

Then God spoke to him. It was a familiar voice he first heard at age 10 when he was called to the ministry — a call he ignored. But this time he listened as the voice told him to “get over it,” acknowledge his crimes, take full responsibility for his actions and seek healing, restitution and reconciliation.

“As crazy as it sounds, I now look at my incarceration as a gift,” says Skinner. “I was looking at life the wrong way. I had my priorities messed up. I don’t believe God sent me to prison, but I needed to change the way I thought.”

For both men, repentance and rebirth led to rehabilitation and “miraculous” early releases. Now, decades later, both are among dozens of Springs-based leaders and hundreds of local volunteers who minister to those who are or have been behind bars through local Protestant churches, the Catholic Diocese and the national ministry Prison Fellowship.

People who minister to prisoners see themselves as living out the words of Jesus, who in Matthew 25 described a day of judgment when humanity will be divided into two groups — the blessed sheep and the cursed goats — based on their actions toward those who are “least” in society:

Such ministry isn’t “sexy” or lucrative, and can be downright heartbreaking when people get out of jail only to reoffend and return, as many eventually do.

But leaders say prison work is an urgent necessity in the United States, a country that jails people at higher numbers and higher rates than any other. Today in Colorado, about 35,000 people are in state prisons, local jails and federal facilities, and more than 80,000 are on probation or parole.

‘The Gospel with skin on it’

Howie Close is a pastor with Woodmen Valley Chapel, a congregation of nearly 7,500 with four campuses around the city: it’s original location near I-25, in Rockrimmon, in Monument and near Falcon.

The church recently opened its fifth campus inside Arkansas Valley Correctional Facility near Ordway, pioneering a model that has since been adopted by three other churches in the state. It also offers a “7 Habits of Highly Effective Parolees” class based on the bestselling business book, and a “Starting Over on The Inside” program in jails and prisons throughout the state. (See related story on Page 14.)

Close says such efforts reveal the DNA of a congregation that seeks “to be the Gospel with skin on it.” Woodmen Valley Chapel also supports COSILoveYou, a Christian nonprofit that connects nearly 100 local churches to address suffering and promote flourishing in Colorado Springs.

“Christians are people of the cross,” he says. “Jesus hung on a cross for criminals, with criminals, and as a criminal. And if we love Jesus, we need to be doing the work of Jesus in the way he did it, and to the people he did it to.”

Close says the U.S. has the world’s best criminal justice system, but it isn’t perfect, and he bemoans the fact that “we have become a nation of the incarcerated” because “there is big money in warehousing people.”

Some people say compassion for criminals is misplaced, and we should lock them up and throw away the key. Close says Christians should take a different approach to these lost souls. “They have worth, and they have value, especially in the sight of God,” he says. “We’re giving them the love they deserve as persons created in image of God .”

“It’s a lot easier to go to prison than most people think,” says Gary Skinner, a former pastor at New Life Church who leads Shiloh Chapel, a small, independent congregation.

Since 2006, he has operated Lessons for Life Ministries, which offers prisoners correspondence courses, life coaching and mentoring designed to help them prepare for life on the outside.

He and a handful of volunteers work with people who are incarcerated, but their focus is on helping those on parole or probation make the difficult transition, especially during their first 90 days of freedom “when they need greatest support.”

Skinner tells his story in his book, “Plain Vanilla Wrapper,” which he has given to more than 25,000 prisoners. His experience taught him that while some prisoners are “violent, terrible people,” many others are simply “knuckleheads” like himself who made bad decisions, often because of anger, alcohol or drugs. Either way, transformation needs to start in the heart.

“We need to do everything we can,” he says, “including being available to talk to them, coaching them, and getting them connected with nonprofits. But if they don’t want to change, there’s not a thing I can do for them.”

He says those who want to change may require patience, and second, third or even fourth chances.

The journey to prison ministry came slowly for Skinner, who operated a window-washing business before being invited to serve at New Life in 1999. As he began handling members’ pleas for help with incarcerated loved ones, he found his calling.

“When I’m at prison, I feel like I’m at home,” he says. “We connect, we laugh, and I’m able to communicate the Gospel and what God has done for me. I love what I do.”

A sanctuary for sinners

Tyler Hill is on staff at the Sanctuary Church, a west-side congregation committed to people who are broken and in need of healing, as its website makes it clear:

…if you’re a saint, a sinner, a loser, a winner, abused, an abuser, a whore, a gambler, lost, fearful, ADHD, a liar, a hypocrite, a bastard, a lover, a cutter, a tweaker, whether you’re an alcoholic, adopted or abandoned, you’re leftover, divorced, LGBT, alone, old, young, driven, a cheater, a success, infected, rejected, pierced or tatted, or just a misfit, YOU ARE WELCOME HERE.

Hill, whose dad is a former Salida pastor who ministered to “folks on the outs,” worked in the hospitality industry, launching The Principal’s Office cocktail bar and Loyal Coffee, before getting a certificate in spiritual direction and joining Sanctuary.

Hill spends part of most weeks visiting prisoners, writing to those he can’t visit, and helping former offenders who flock to the church.

At the core of his work is a theology of human dignity — a concept he says is foreign to America’s “prison industrial complex.”

“It’s about seeing people’s belovedness,” he says, “and recognizing that the people right in front of you were made in the image of God.”

While some people might not feel called to visit prisoners, Hill says anyone can write them letters, as he regularly does. One of his correspondents who has been locked up for decades will get out soon, and will head straight to Sanctuary Church.

Church member Ben Pierce is the Colorado and Wyoming field director for Prison Fellowship, a ministry founded in 1976 by Charles Colson, who went to prison for his role in President Richard Nixon’s Watergate crimes and cover-up

And dignity is a theme of the Catholic prison and jail ministry operated by the Diocese of Colorado Springs, which offers Communion Services or Liturgy of the Word services in county jails and state facilities.

“The incarcerated population within our Diocese exceeds 6,000 men and women,” says its website.

The woman worked for years as a secretary, unaware that she would inherit $60 million from her father after his death. She wanted to give most…