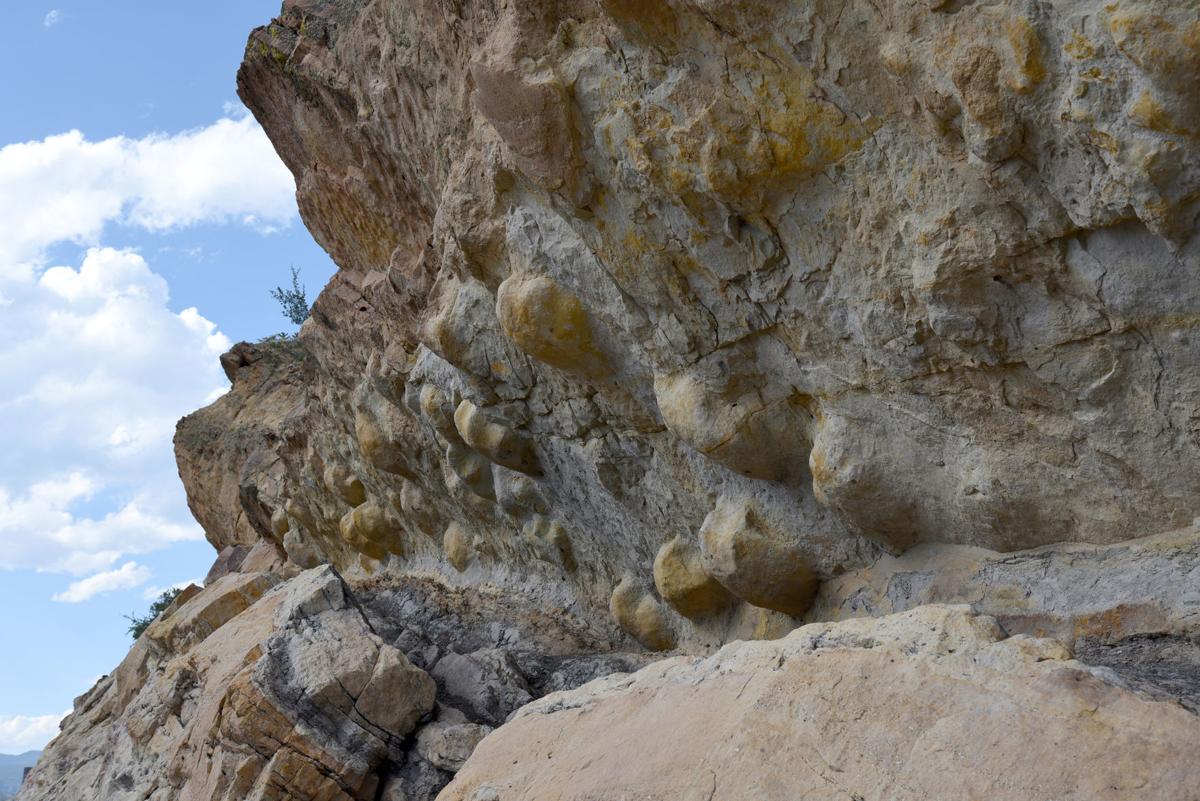 Look to the left on the way up Skyline Drive off U.S. 50 outside Cañon City to see the dinosaur trackway. 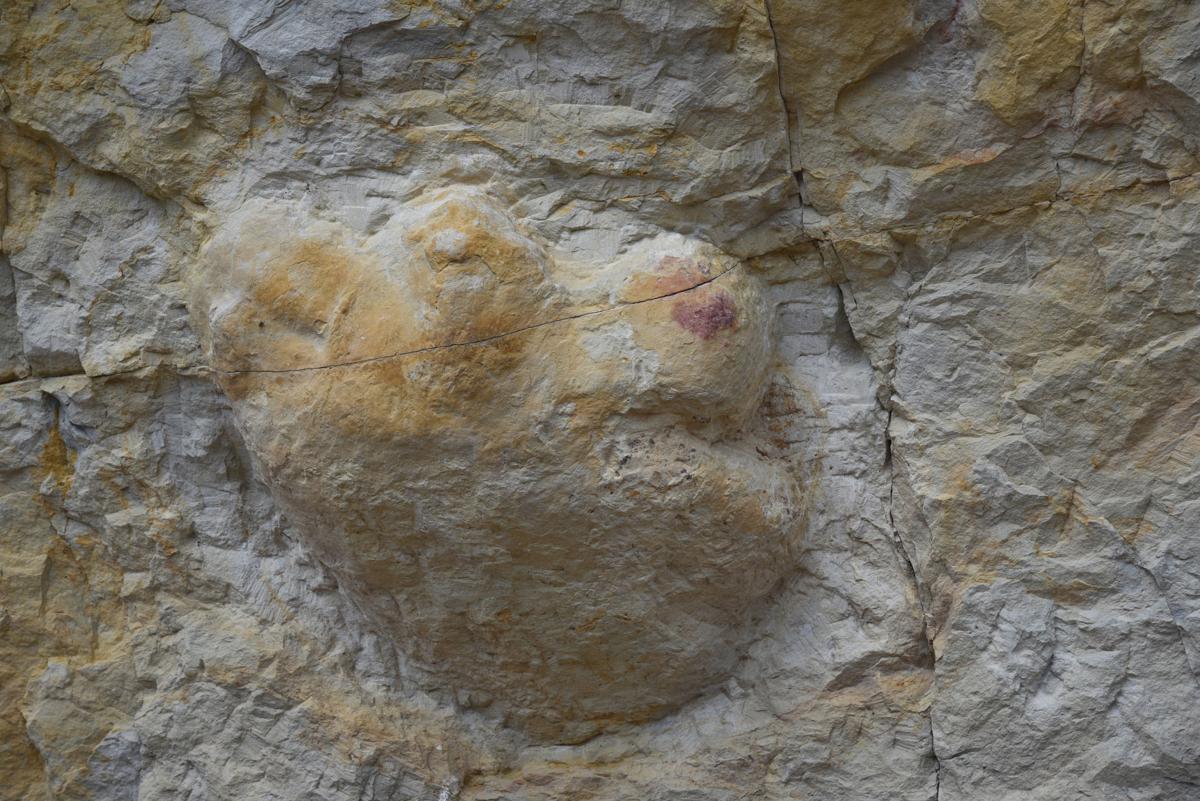 The ankylosaurus dinosaur was three-toed and weighed 7 tons, paleontologists say, and it would leave large indents in the mud. 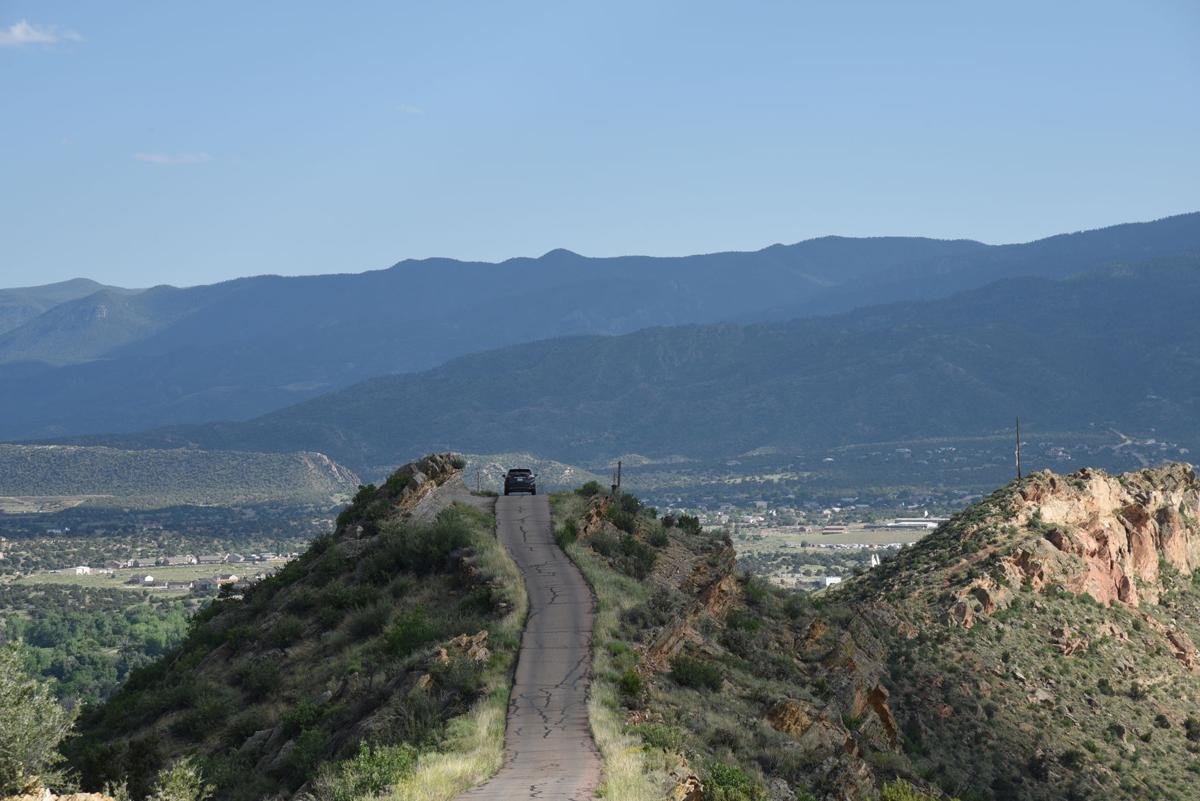 The scenic view from Skyline Drive, a narrow, one-way road off U.S. 50 outside Cañon City.

Look to the left on the way up Skyline Drive off U.S. 50 outside Cañon City to see the dinosaur trackway.

The ankylosaurus dinosaur was three-toed and weighed 7 tons, paleontologists say, and it would leave large indents in the mud.

The scenic view from Skyline Drive, a narrow, one-way road off U.S. 50 outside Cañon City.

CAÑON CITY • As if the tip-top view from scenic Skyline Drive isn’t awesome enough, another attraction on the narrow, no guardrail-road also sticks out.

After entering through a 1932 stone archway off U.S. 50, giant protruding nubs to the left deserve a looky-loo. Or even a stop along the one-lane road to read the interpretive signs and get closer to the past.

But, he said, “Once you point it out, it’s pretty easy to see. The interpretive signage is a linchpin.”

Reverse casts of actual footprints of ankylosaurus dinosaurs have been preserved in the exposed shale and limestone strata. Estimated age: 68 million to 65 million years.

The Skyline Drive Dinosaur Trackway, in the Hogbacks Open Space Recreation Area, is a journey through time that’s marking a 20th anniversary.

Discovered by a graduate-level paleontology student William Kurtz, the site was excavated in 1999 by a team from a now-shuttered dinosaur museum in Cañon City.

Reynolds remembers bouldering in the early 1990s in the same area when a friend said, “Hey, look, dinosaur tracks.”

“We just laughed at him,” Reynolds said.

The set of 10 tracks is thought to be from a group of ankylosaurus dinosaurs making their way westward through what used to be marshlands on the edge of a large body of brackish water.

Not many ankylosaurus dinosaurs live in paleontology record books, Reynolds said. In addition to the Skyline Drive trackway, evidence of the stock, armor-clad bodies has been found in Montana, Wyoming, Utah and New Mexico.

With such girth, “They would have made a deep impression in the mud,” Reynolds said.

Fossilized leaves from plants, wood and other debris can be spotted in the Dakota sandstone near the tracks, which sit atop oxidized volcanic ash.

Some ankylosaurus had rounded bumps; others, spiky points on their hard shells. But they were most known for a ferocious club tail that could quickly whip to defend against predators such as the Tyrannosaurus rex, Reynolds said.

“They could shatter the bones of a T-Rex with their tail,” he said.

The ankylosaurus is favorite dinosaur among children “because they’re docile yet tough-looking, and kids can relate to anything feeling tough but not necessarily being mean.”

The footprints are above eye-level, as geological layers lifted and then became exposed through erosion.

And that’s part of the fun of paleontology, Reynolds said: You never know when remnants of the past will be unearthed.

Fremont County is famous for dinosaur discoveries, including the late 1800s “bones wars” between paleontologists and the subsequent unearthing of five sauropods, including the first allosaurus and brontosaurus remains, and the 1992 uncovering of a stegosaurus.

But the Skyline Drive trackway is unique.

“It’s not very often you can find something that’s actual dinosaur in nature,” Reynolds said. “There aren’t many dinosaur tracks in southern Colorado where you look at them openly and easily.”

Besides, everybody loves dinosaurs, he said.

“They’re thrilling to people of all ages, and they love to learn about them because they’re not here anymore and you can’t interact with them.”

While people of the 21st century know a lot about dinosaurs, the creatures also remain somewhat of a mystery.

“There’s still so much we don’t know that it leaves it open to the interpretation of the imagination.”

For example, it’s anyone’s guess what colors dinosaurs were.

“So technically, you can’t be wrong.”

HIGHLANDS RANCH — Construction workers have unearthed fossils in a Denver suburb that experts say could be from a rare horned dinosaur.