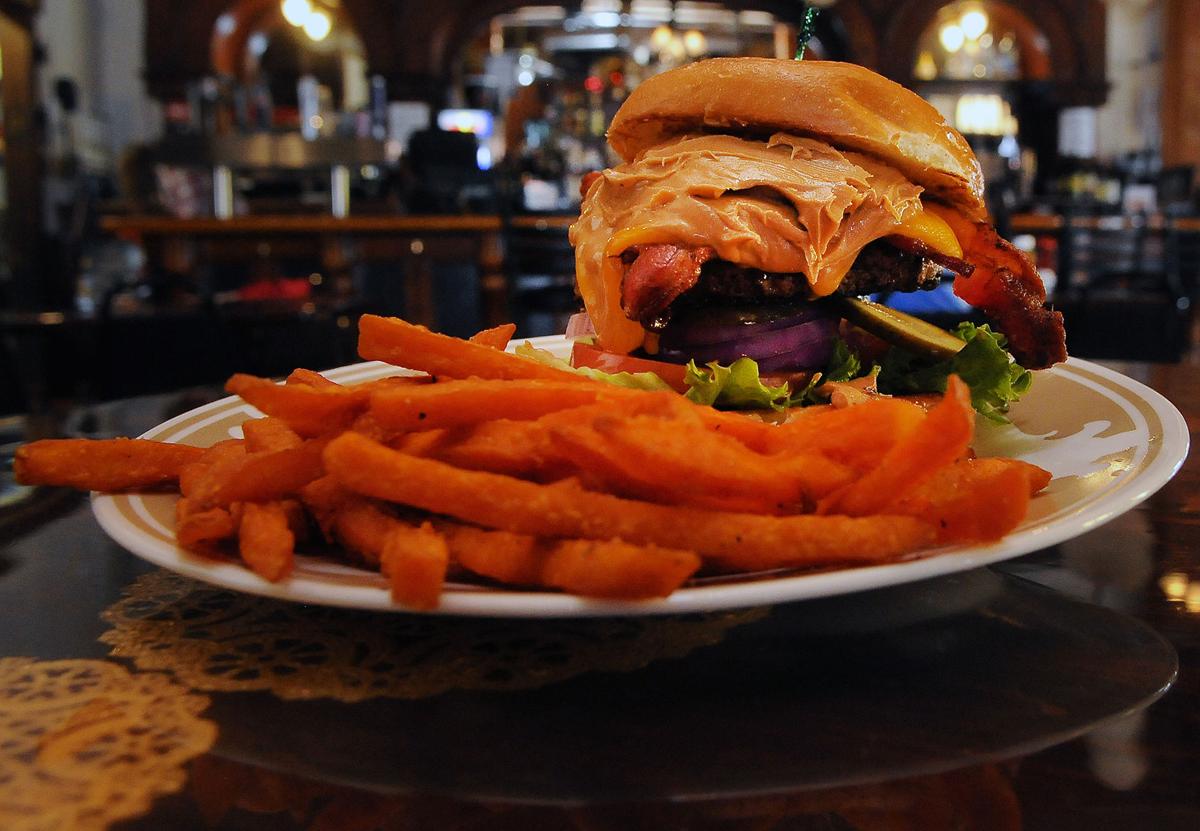 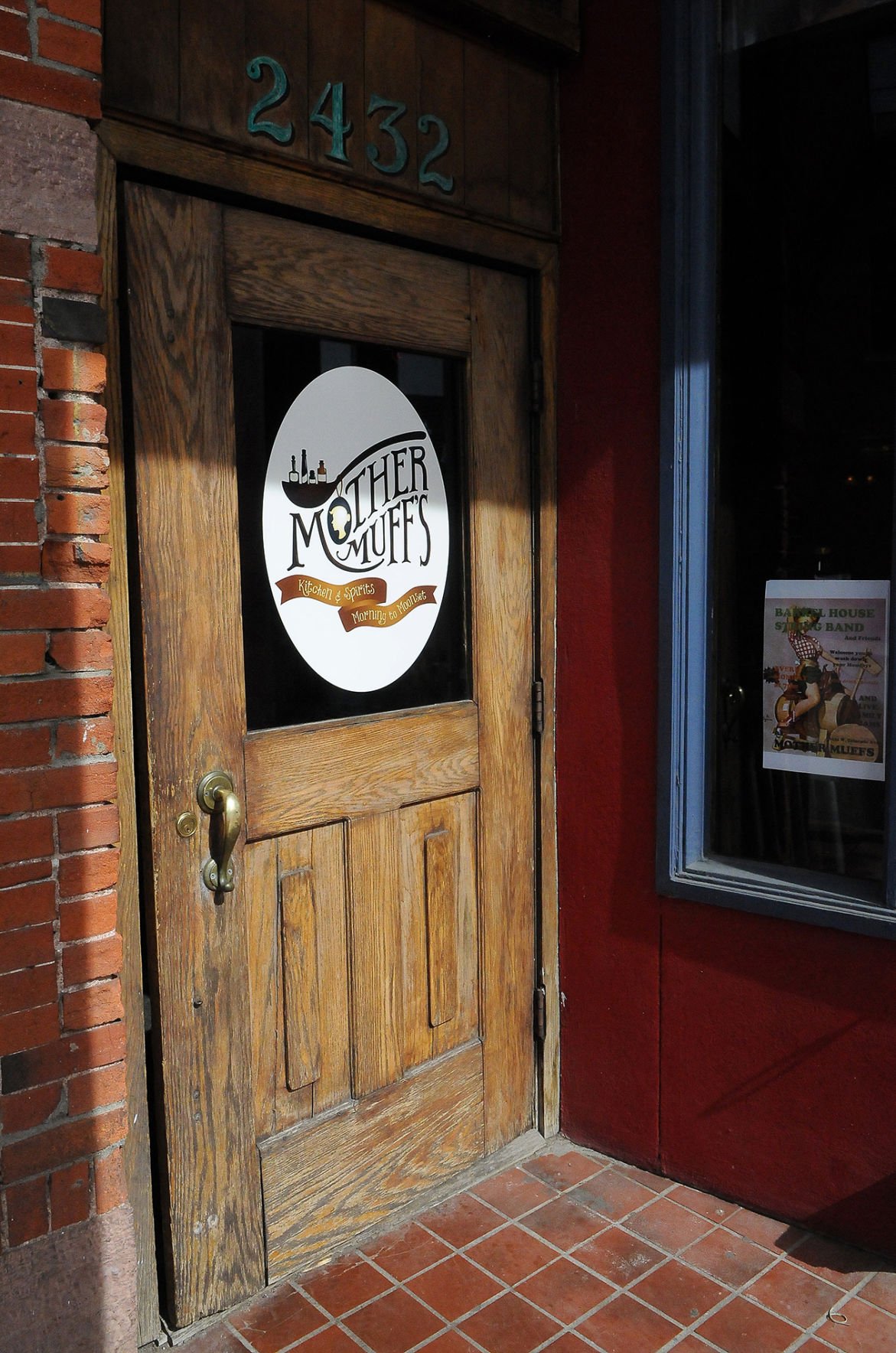 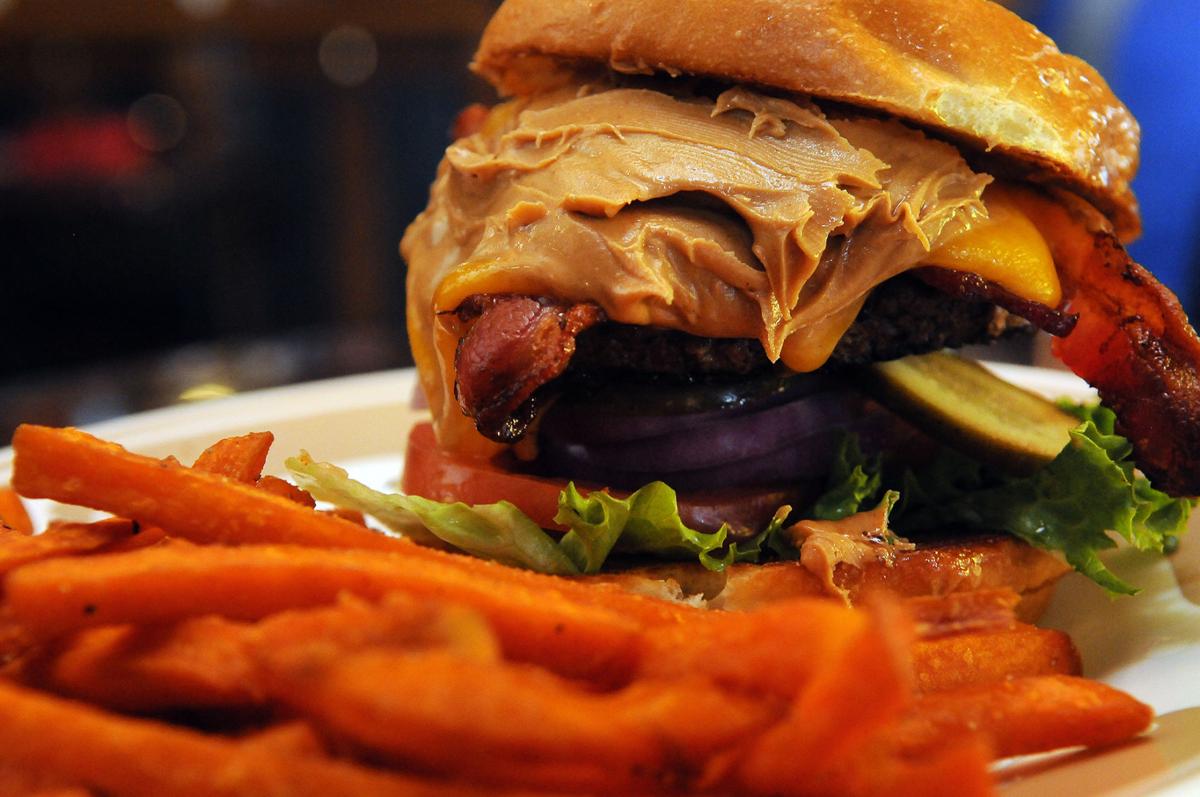 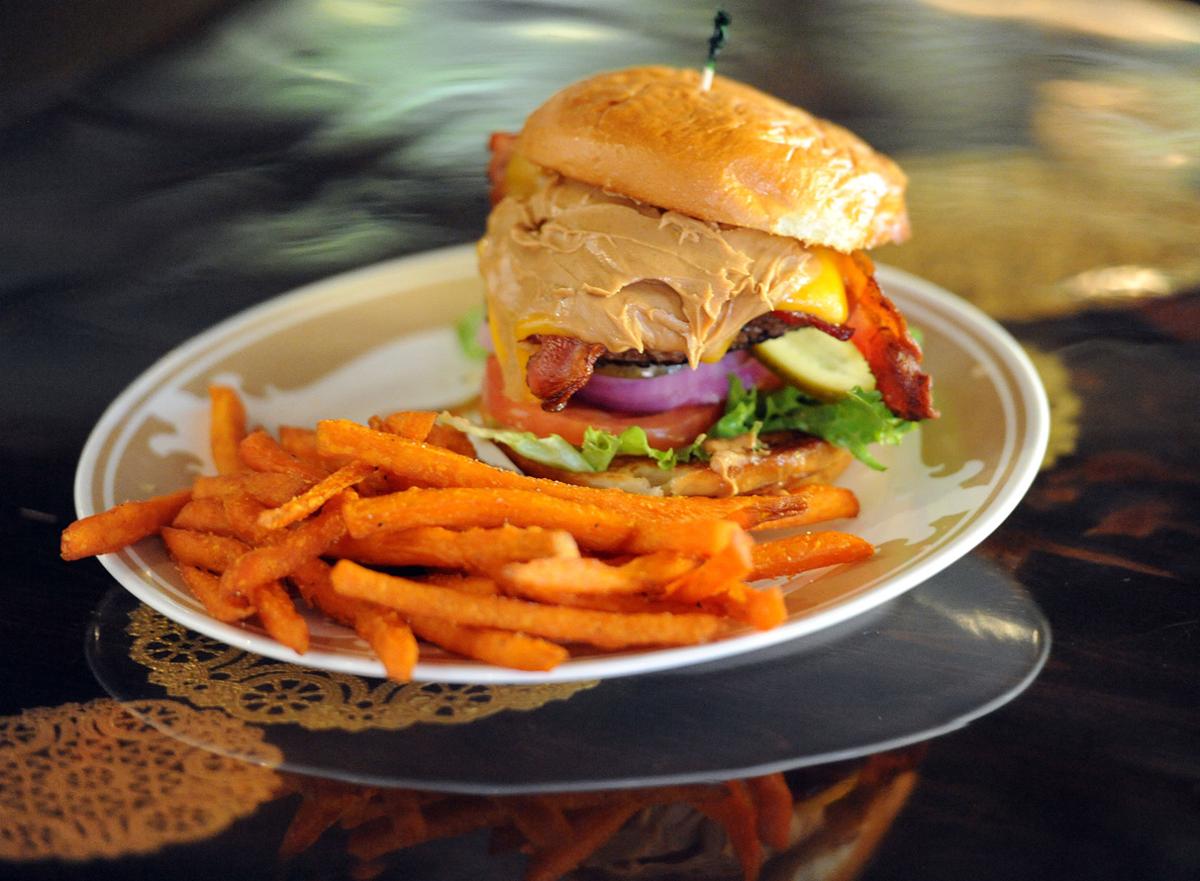 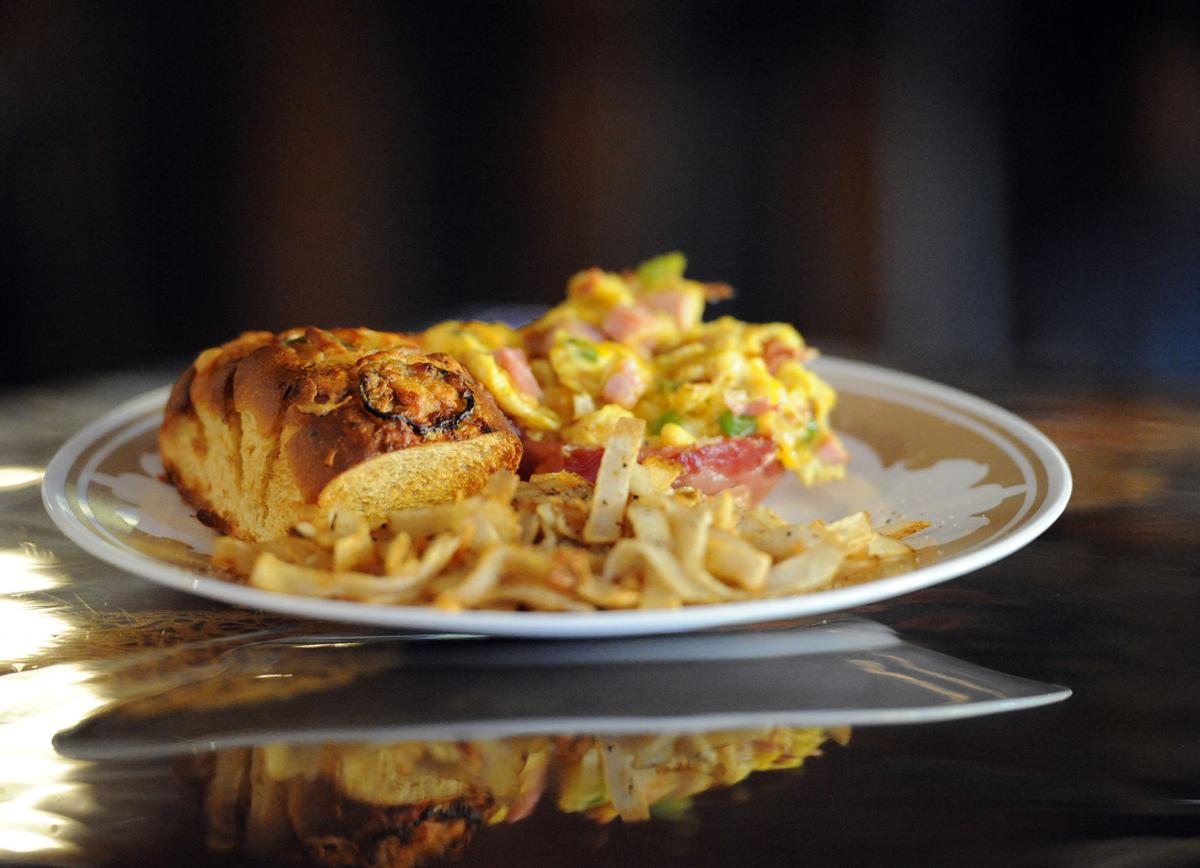 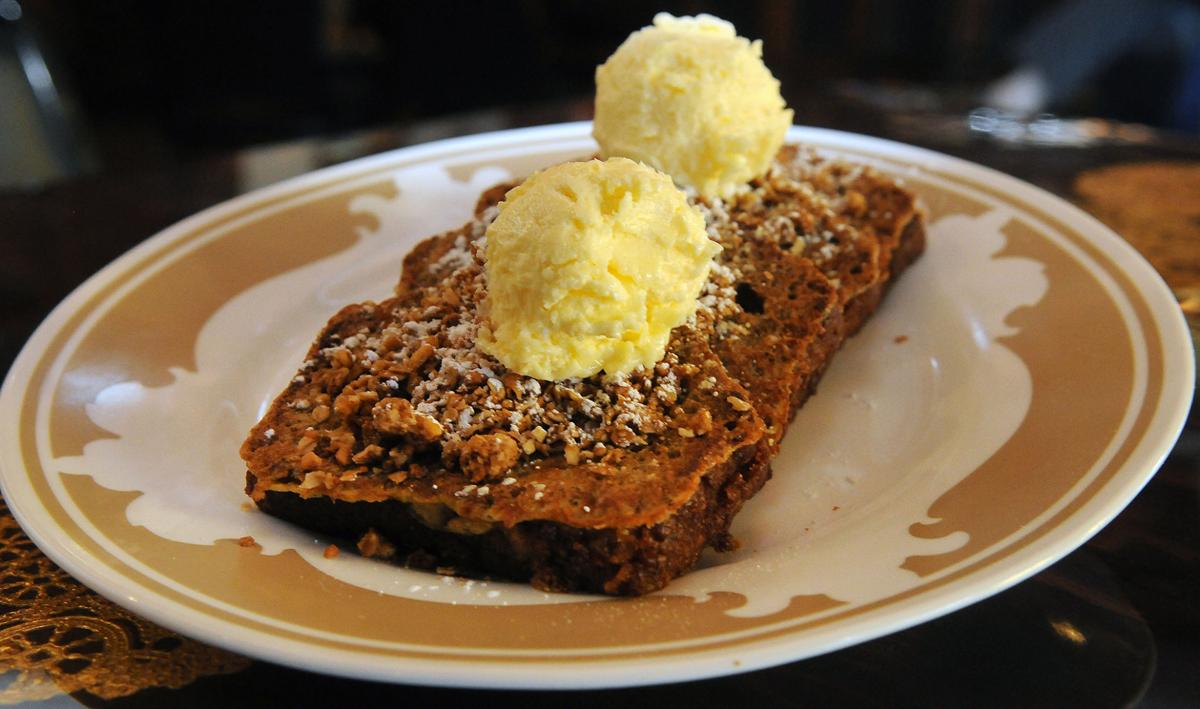 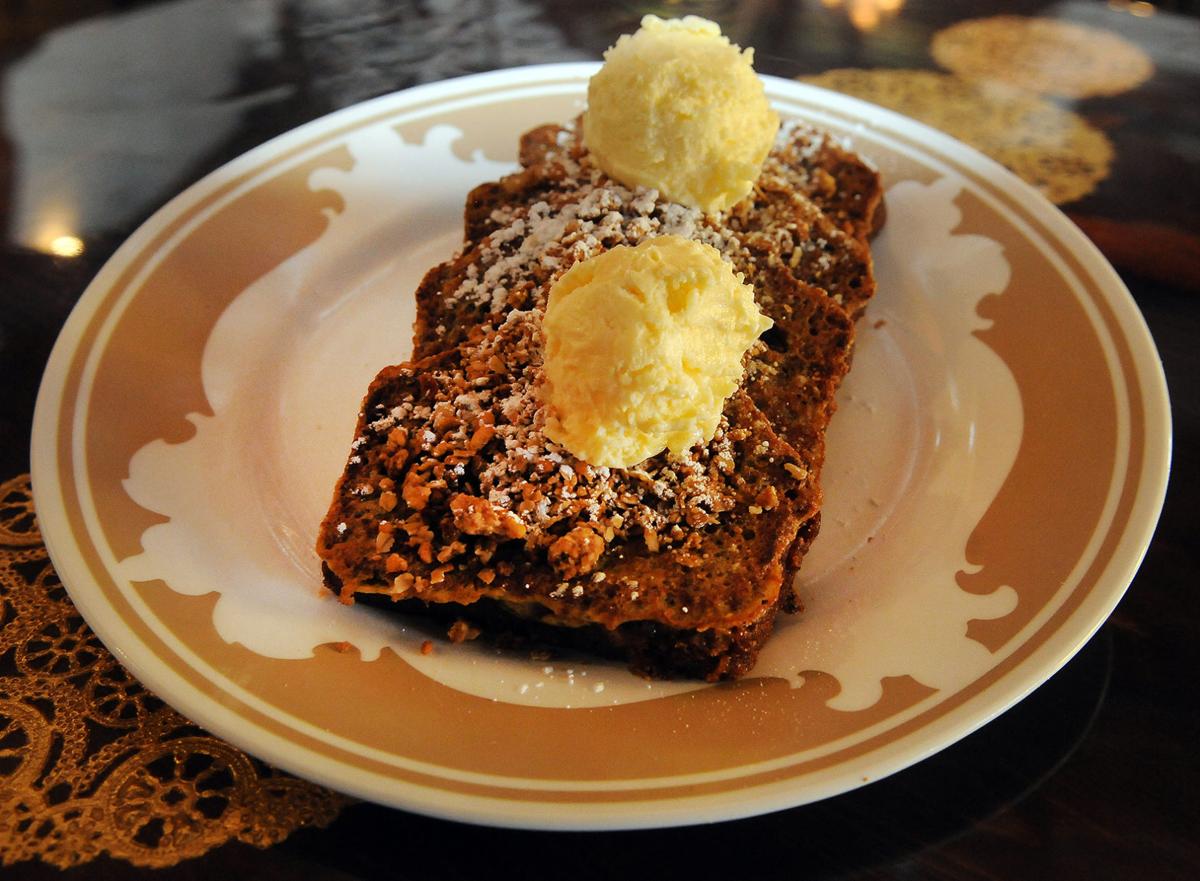 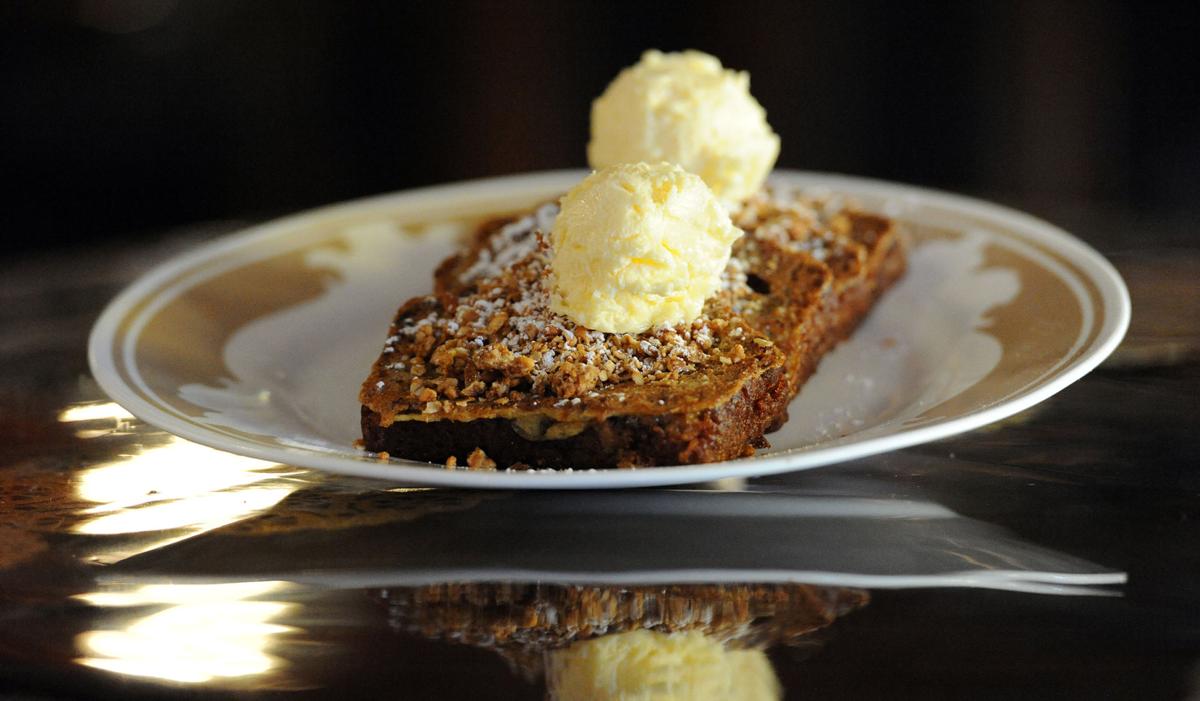 Mother Muff's got a new do and it's anything but matronly.

Formerly Meadow Muffins, the place has a fresh look, expanded menu and new owners. Long gone is the general clutter that I recall from the past. Instead, the beautiful stained glass windows and tin ceiling command attention. The interior of Mother Muff's Kitchen and Spirits highlights its early 1900s history with 21st-century amenities.

The menu highlights breakfast, which is served the entire time the kitchen is open: from 8 a.m. to 1 a.m. Roughly two-thirds of the menu is devoted to breakfast, but everything is available any time.

My first visit I opted for the breakfast-for-dinner route with the Chicken-n-Waffles ($9.99). This not necessarily a breakfast item, but that's the section it was listed under.

Four crispy wings are served atop a Belgian waffle. Although it takes a little more work to cut the meat off a chicken wing, it's worth it. I know wings are finger food, but the whole point of this combination is to have bites of both elements. They're complementary textures and flavors augmented by maple syrup. This appears to be a popular dish; I noticed several plates delivered to other tables throughout our visit.

Mother Muff's offers nine burger possibilities, and most are impressively creative. The Jiffy Burger ($9.99) made with cheddar and peanut butter is not something I'd necessarily order, but I have to admit it caught my attention. On the other hand, the My Big Fat Greek Burger ($10.99), with spinach, feta cheese and Kalamata olives, is something I'd be inclined to sample.

On my second visit - this time a lunch/dinner for breakfast approach - I ordered the Cronut Burger ($9.99). This may be the most decadent burger I've ever had. A thick, juicy patty with melted cheddar, topped with the usual accoutrements of lettuce, onion and tomato, sits between a sliced Cronut. This glazed union of a doughnut and a croissant is a trademark pastry. Literally. The name and product is a registered trademark by the New York City bakery where it was first introduced to the world. According to our server, Mother Muff's obtains its Cronuts from Muff's food distributor.

The Cronut Burger would be difficult to eat without a fork and knife; I didn't even try. Instead, I gracefully (that might be a slight exaggeration) cut bite-size pieces, making sure I had part of the sugary-glazed pastry in every mouthful. I would never have thought of using a doughnutlike product in place of bun, but I'm glad I tried it.

My second visit also included a Bacon Bowl, which is just what it sounds like: thick slices of bacon shaped like a bowl filled with scrambled eggs and other ingredients. We ordered the "Have It Your Way" version ($9.99) with green peppers, onions and cheddar (the cheese was an extra 50 cents). The concept is innovative, but the bacon, although a great flavor addition to the ingredients in the bowl, was a little hard to cut. Still, it was bacon, which made it well worth the minor effort. It came with a choice of toast or biscuit. The latter is made in-house. Even though it wasn't as flakey as most, it was a nice alternative to standard toast.

The only downsides to the breakfast were the sides of hash browns. Thin, ribbonlike pieces of potatoes arrived at our table undercooked. Our attentive server brought out new servings that, unfortunately, were like an oil slick on a plate. To her credit, she knocked a few dollars off the final bill, but it was disappointing nonetheless. I like hash browns and was disappointed that the two servings I received were inedible.

Service at dinner was equally attentive, although there were no mishaps. Besides the chicken and waffles, we ordered the BBQ Bacon Burger ($9.99). This, too, was a gloriously messy burger to eat, and the blend of bacon and tangy barbecue sauce added to the enjoyment.

The menu also includes pizza, sandwiches, pancakes, omelets, several egg entrees and lots more bacon. In fact, the first item listed is the Baskets O' Bacon($5.99): five strips of bacon, in flavors such as peppered, brown sugar and jalapeno, among others, designed to "stir your breakfast appetite."

The historic décor is offset by the four televisions and jukebox, those modern-day amenities previously referenced.

Still, it's a comfortable environment to enjoy breakfast, lunch or dinner most any time of day or night.