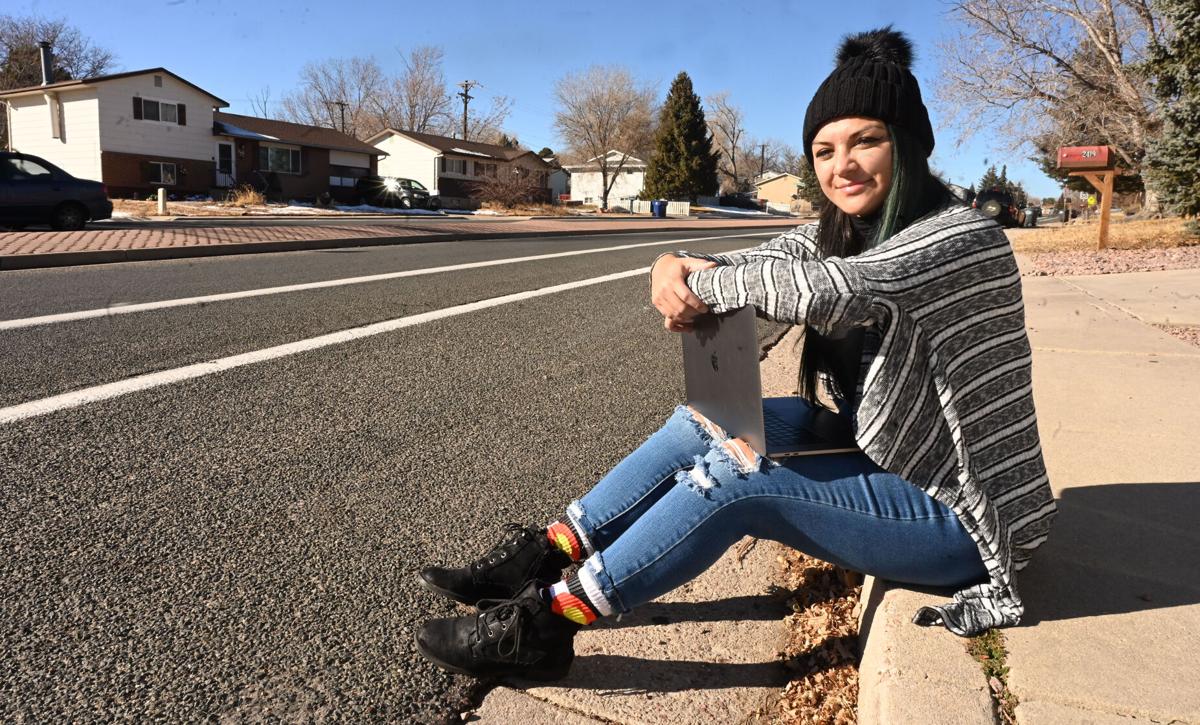 Julie Ramirez sits with her laptop that she uses to edit video shot for her new 12-part video series about southeast Colorado Springs, “Daily Dose 719.” The series explores the history and current state of the most racially and culturally diverse area in the Pikes Peak region.

Colorado Equity Compass has provided Julie Ramirez with tools and resources, including a videographer, to help her produce her video series. 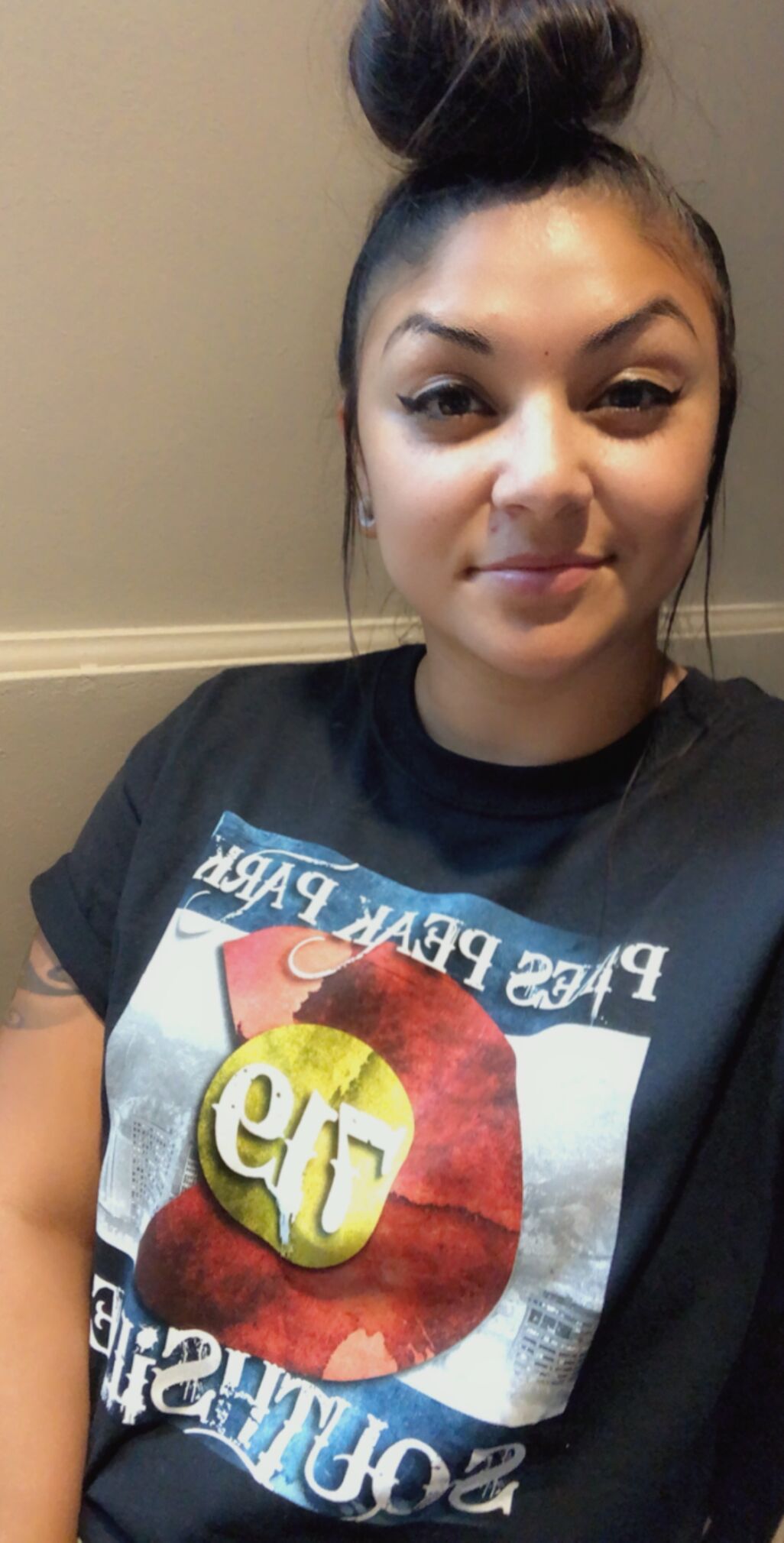 Julie Ramirez, a Harrison High School graduate, is the driving force behind the 12-part video series “Daily Dose 719.” It can be found online at Facebook and YouTube. Search for @dailydose719. Courtesy Julie Ramirez

Julie Ramirez sits with her laptop that she uses to edit video shot for her new 12-part video series about southeast Colorado Springs, “Daily Dose 719.” The series explores the history and current state of the most racially and culturally diverse area in the Pikes Peak region.

Colorado Equity Compass has provided Julie Ramirez with tools and resources, including a videographer, to help her produce her video series.

Julie Ramirez, a Harrison High School graduate, is the driving force behind the 12-part video series “Daily Dose 719.” It can be found online at Facebook and YouTube. Search for @dailydose719. Courtesy Julie Ramirez

Southeast Colorado Springs is the most racially and culturally diverse area in the Pikes Peak region.

And it also has an image problem, due in no small part to a set of grim statistics. In 2019, The Gazette reported the numbers: an unemployment rate two to three times that of the rest of the city; 42% of the city’s impoverished children and 34% of its residents living below the federal poverty level; 42% of Springs’ gang incidents; 31% of the city’s violent crimes; and higher than state average rates of obesity, diabetes, smoking and self-reported mental distress.

Julie Ramirez, whose grandmother bought a house in the neighborhood in the ’70s, has called the area home since she was 3. She’s no stranger to her community’s reputation, but she’s also quick to praise its positive aspects.

“We’re a melting pot of ideas and religions and languages,” says the 29-year-old Harrison High School graduate. “That makes us really unique compared to the rest of the city in the sense that we are an area with more poverty and challenges, but it’s brought the community together in a way I don’t know if the rest of the city has seen.”

Recently, though, she’s watched with concern as her community has been tapped for expansion to accommodate the influx of people moving to our Olympic City. There are housing developments and a $9 million redevelopment of Panorama Park. Shopping centers are being renovated. New businesses are set to open.

“While I realize there’s a huge need for more housing and we did have more space for it, the prices of the housing are not something community members can afford to live in,” she says.

“The houses that already existed are really pricey right now. I’m worried people will be displaced. And people who made this community what it is won’t be able to afford living here anymore.”

Ramirez is documenting those concerns in a new 12-part video series, “Daily Dose 719,” that explores the history and current state of the southeastern part of town. It’s an anti-gentrification push combined with education about health equity, defined as the opportunity for all to thrive, and making sure the community’s voice isn’t lost, she says. The first three episodes are available online by searching @dailydose719 on Facebook or YouTube.

Leah Davis Witherow, Colorado Springs Pioneers Museum curator of history, who provides some of the city’s historical background in the first episode, says the southeast has been ignored for too long, and hasn’t been part of the conversation about historic preservation and community.

“There are great stories about people caring for their neighbors,” Witherow says.

“There’s a tremendous energy and it’s been there, it didn’t just happen. It’s a great place to live, where people are really connected to each other and proud to be from southeast Colorado Springs. They are owning it and telling their own stories.”

Ramirez lives in Pikes Peak Park, a community in the 80910 and 80916 ZIP codes, the areas featured in her video series. Prior to the project, she was working to open Stompin’ Groundz, a new coffee shop in the Mission Trace Shopping Center. She intended it to be a place where community members could gather and keep abreast of the happenings in their part of town. The project is on hold, due to the pandemic.

With no timeline to opening, she still felt an urge to grow the community and culture the coffee shop could have engendered. She found a way to do that through Colorado Equity Compass, a pilot initiative that has developed a platform to use data to tell stories. The initiative is supporting communities across Colorado that are working to advance health equity, which, according to data, is not happening in southeast Colorado Springs

Each episode of “Daily Dose 719” focuses on one of the 12 determinants of health that affect life expectancy, as defined by El Paso County Public Health, including access to food and health care, neighborhood design or conditions and education.

“Where we live impacts our health more than our genetic code,” Ramirez says. “There are areas and neighborhoods (in Colorado Springs) with a 10-plus year difference in life expectancy. It’s impacting our health to the extent that people are dying sooner. We have people in our community with higher rates of diabetes, obesity and heart disease.”

Colorado Equity Compass has provided Ramirez with tools and resources, including a videographer, to help her churn out data-driven stories about the disparity in health faced by those living in her community.

“People in communities would see public health data and not know what to do with that information,” says Colorado Equity Compass Project Manager Annie Guo VanDan.

“We’ve developed a platform that can show what’s happening in communities within ZIP codes and their respective neighborhoods. When you only have data it doesn’t tell the whole story. How can we amplify the voices of the community to go along with the data?”

In fall of 2019, Colorado Equity Compass selected four communities to use the platform and provided them with data and storytelling support to promote health equity work. Along with southeastern Springs are Larimer County; Pitkin, Garfield and Eagle counties; and Denver’s east Colfax neighborhood.

The pilot initiative will run through March. It funded six of Ramirez’s “Daily Dose 719” episodes. She hopes to find other sources of funding to complete the series.

Part of the work is identifying the historical narrative of the community to change the narrative for the southeast Springs. For example, says Guo VanDan, a King Soopers was supposed to open in the area years ago, but a highway bypass was built instead. The grocery store never happened, which would have contributed to more healthy food options and perhaps changed the health equity of the community.

“It’s looking at some things that have happened in history and mapping those out,” Guo VanDan says. “Things in their community that further increase health disparities, that cause more of a gap in health, that happened over time. Why is this community more disenfranchised and behind?”

Getting out into the community and finding people with stories to tell is vital to create a richer and more complex narrative of Colorado Springs, believes Witherow.

“We are a lot more than our reputation regionally, across the state and in the West,” she says. “We’re so much more interesting and have more potential and possibility than others give us credit for and what we give ourselves credit for.”

Ramirez’s goal for the project is to teach people about health equity and help create policy change that will increase equitable practices. Keeping the history of her community alive also is important. She knows growing up in such a diverse community shaped her as a human.

“I got an invaluable experience at Harrison High School. I was exposed to diversity which creates another level of empathy you can’t learn in a workshop,” she says. “That lived experience of having so many different kinds of people surrounding me creates a really broad perspective.”