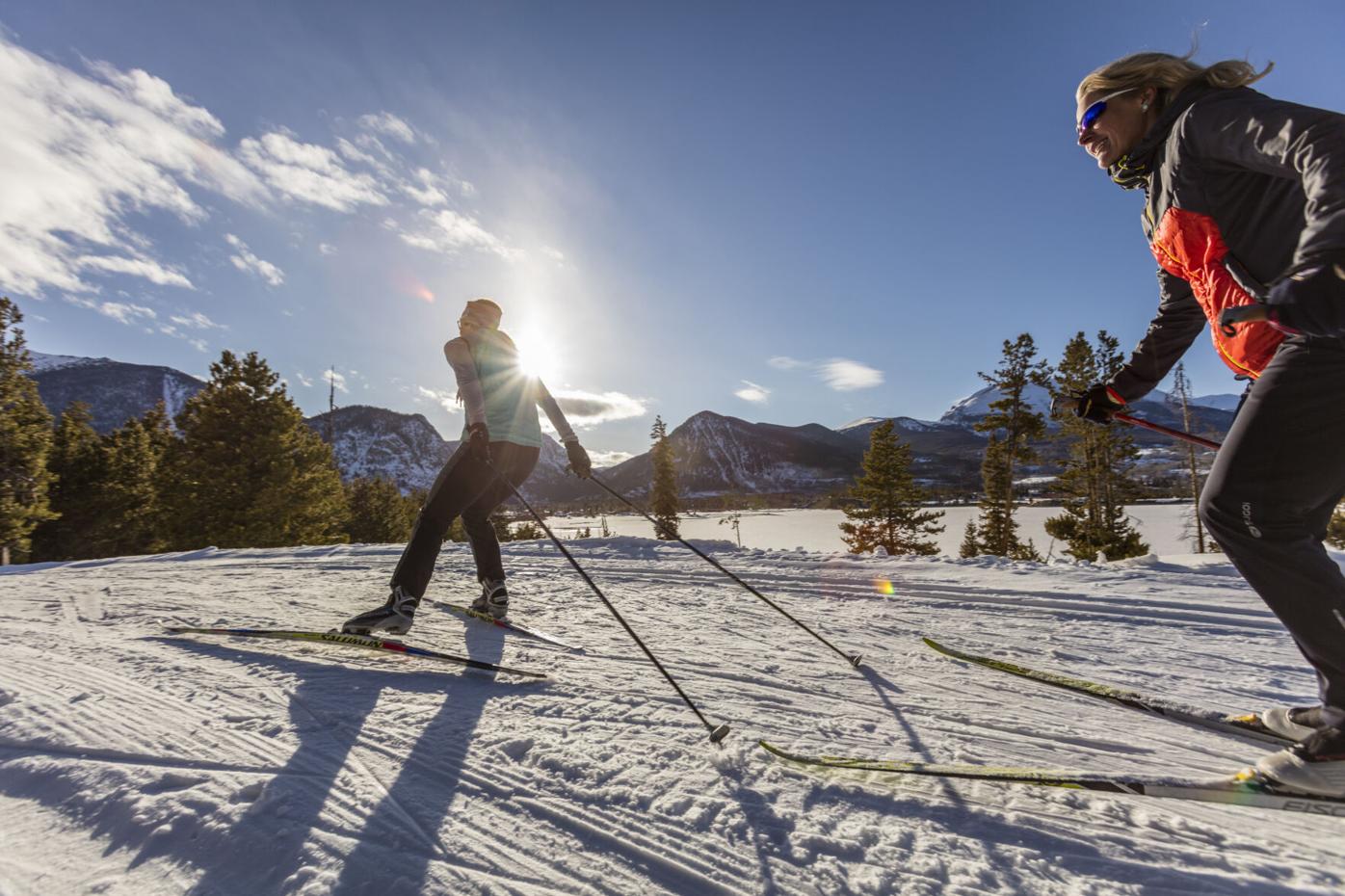 “Skate skiing” is generally a faster form of “classic skiing,” where the skis spread like a “V,” rather than stay parallel like an exaggerated walk in classic form. 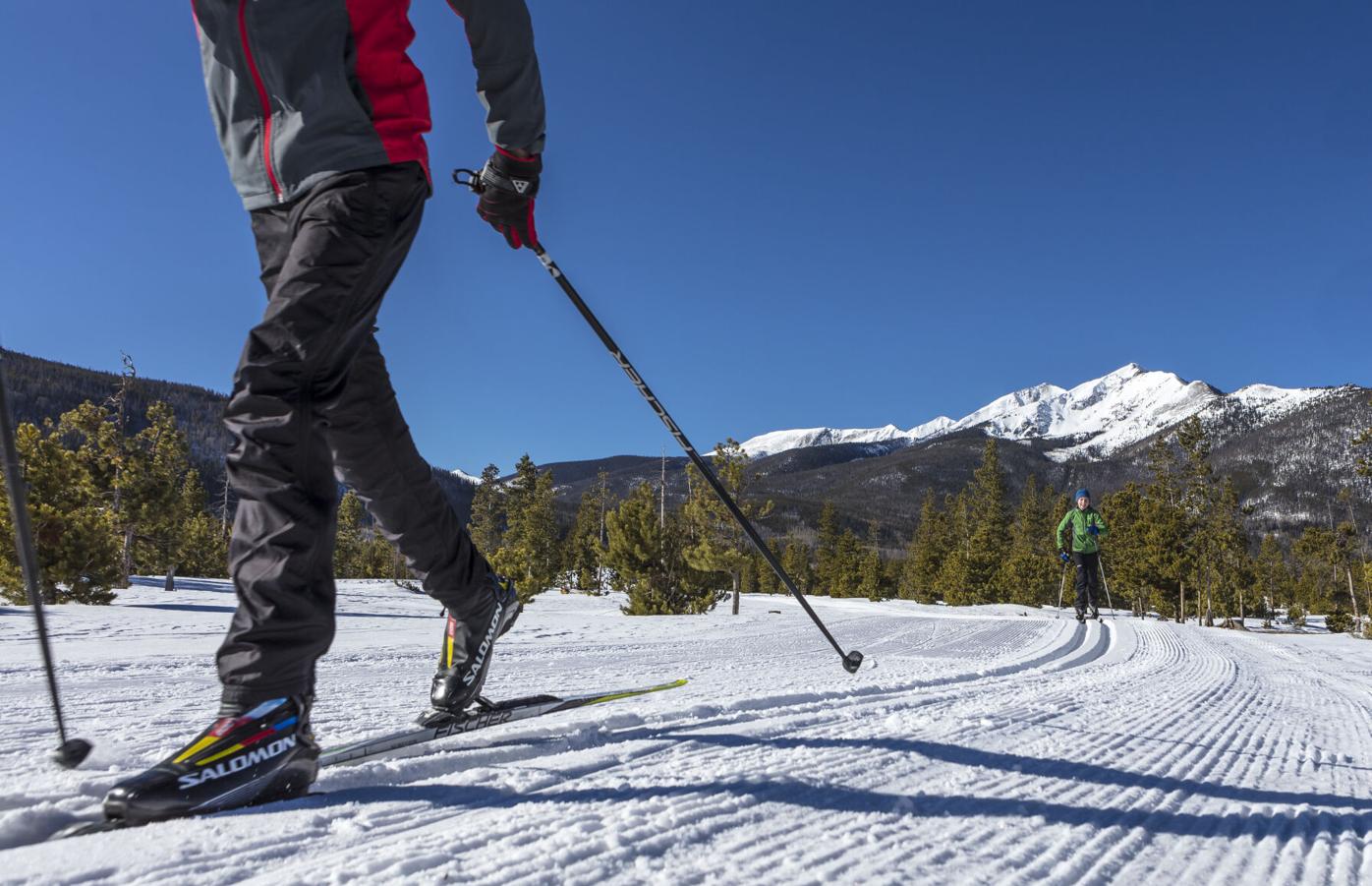 In cross-country skiing, unlike in downhill skiing, the heels are free to move about. 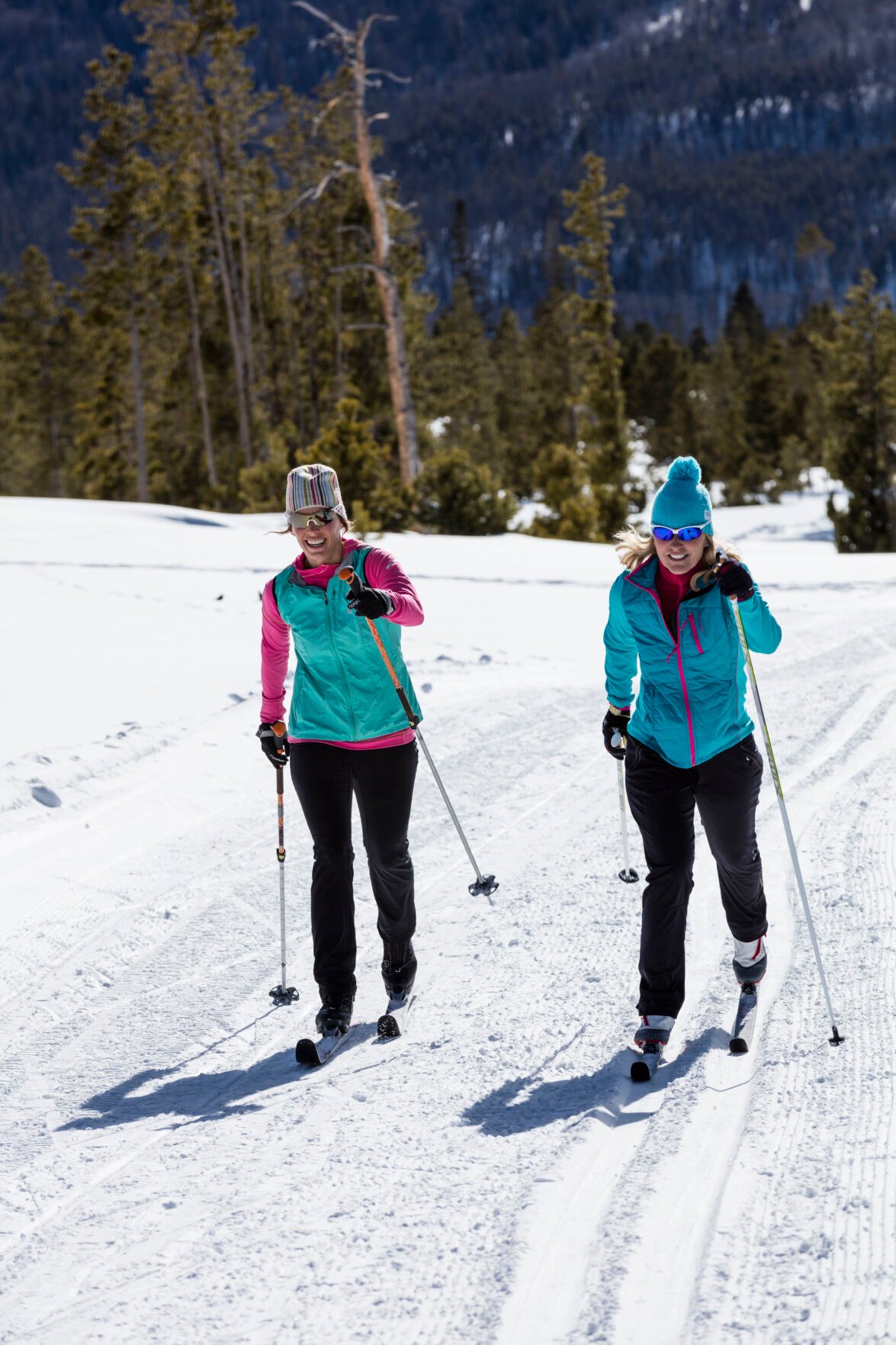 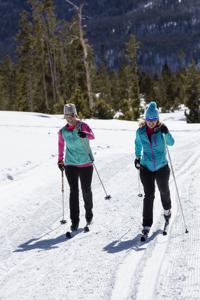 A pair of skiers at Frisco Nordic Center in Summit County. 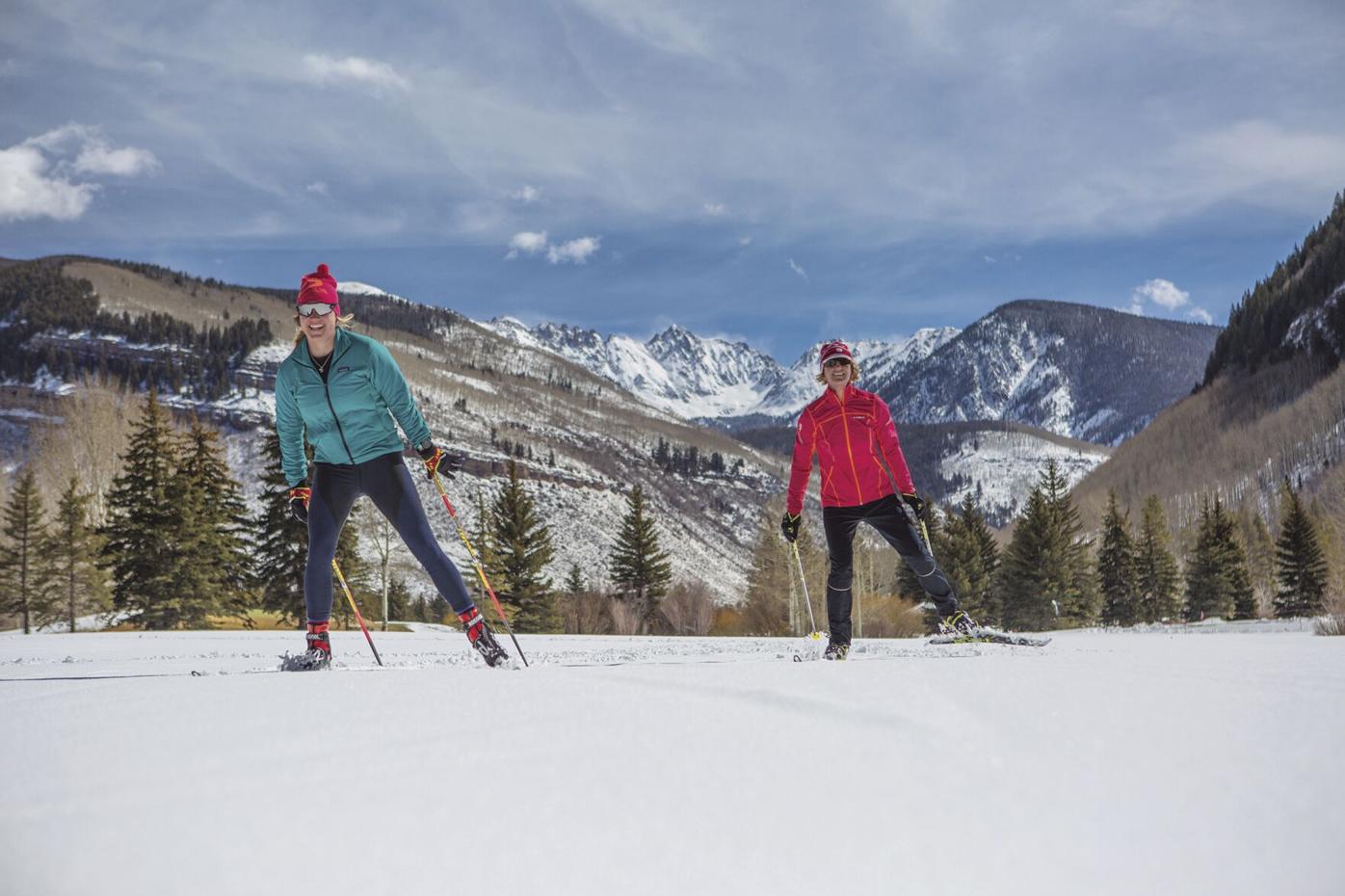 A pair of skiers on Vail Nordic Center’s groomed trails. 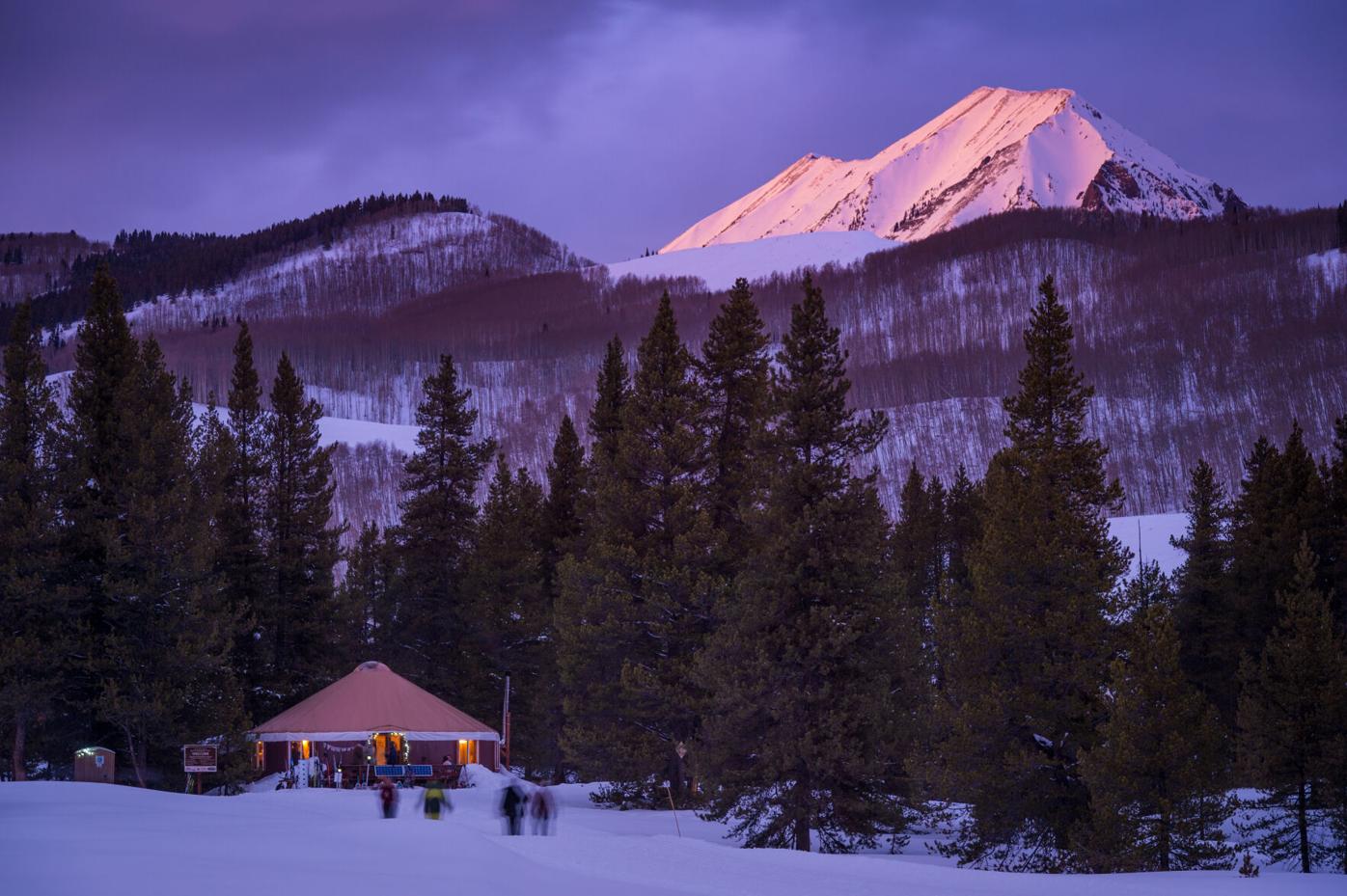 A warming hut glows during a backcountry tour as part of Crested Butte Nordic. For beginners, Nordic centers are a good place to learn the ways of cross-country skiing. 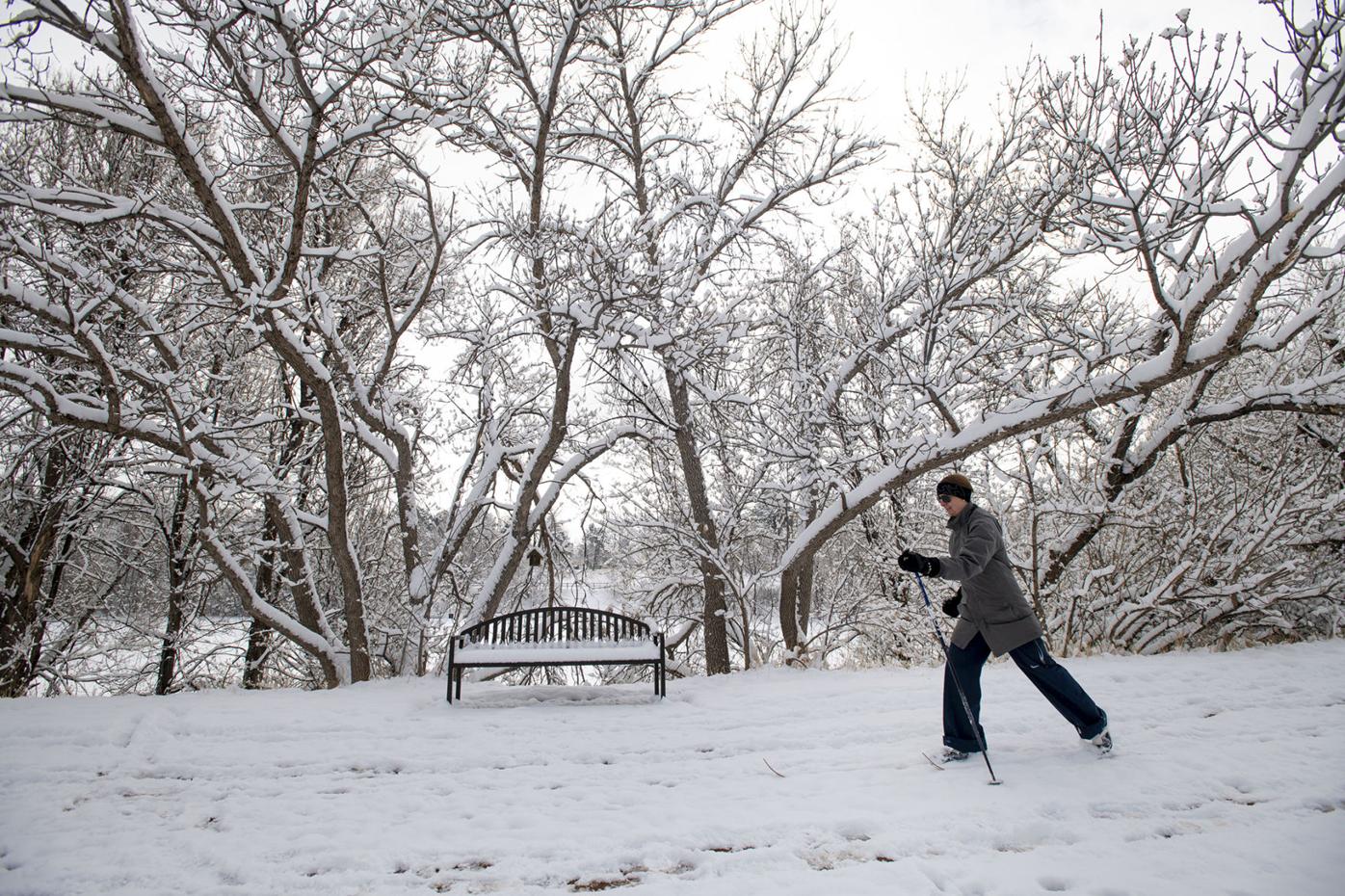 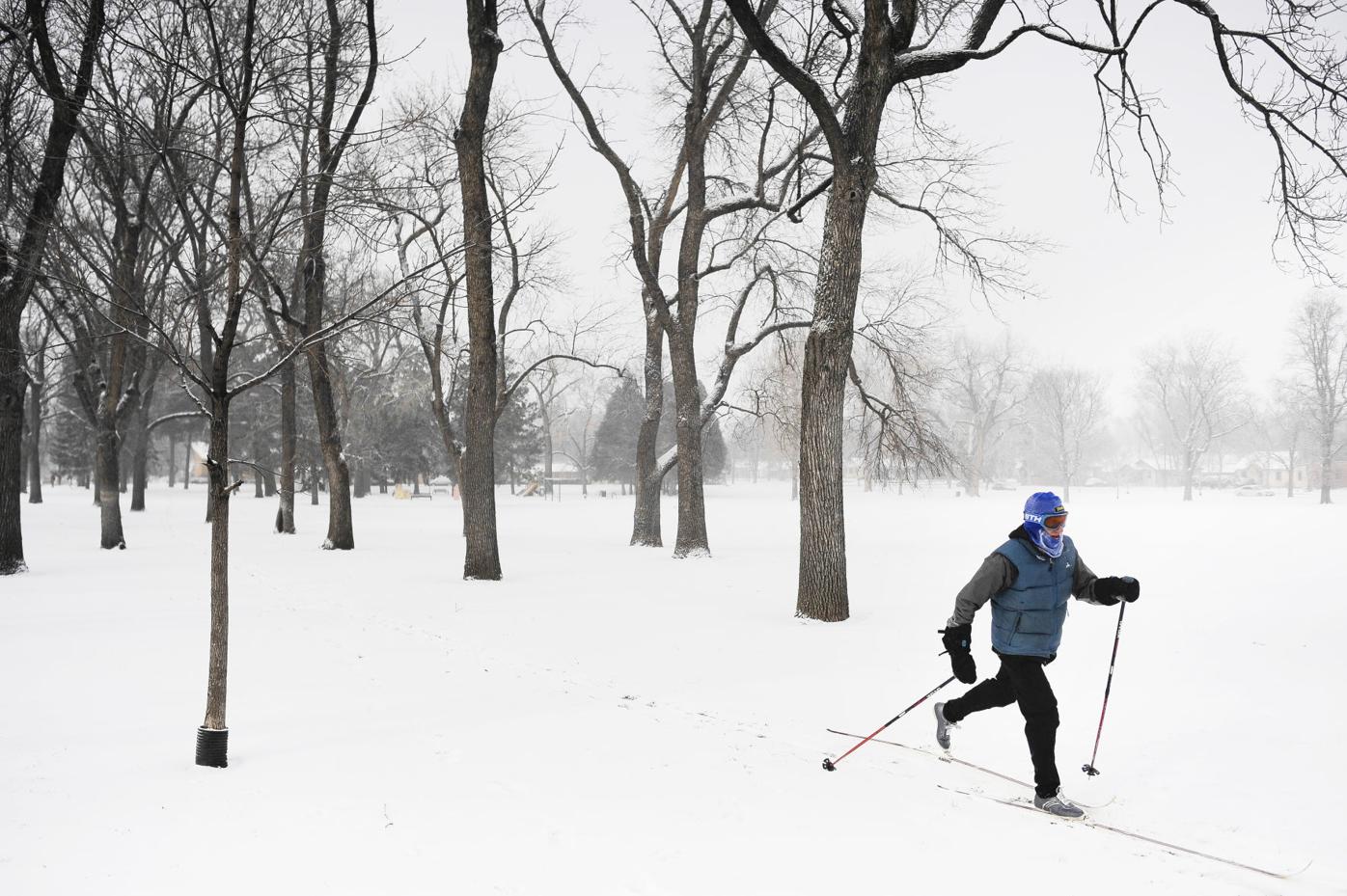 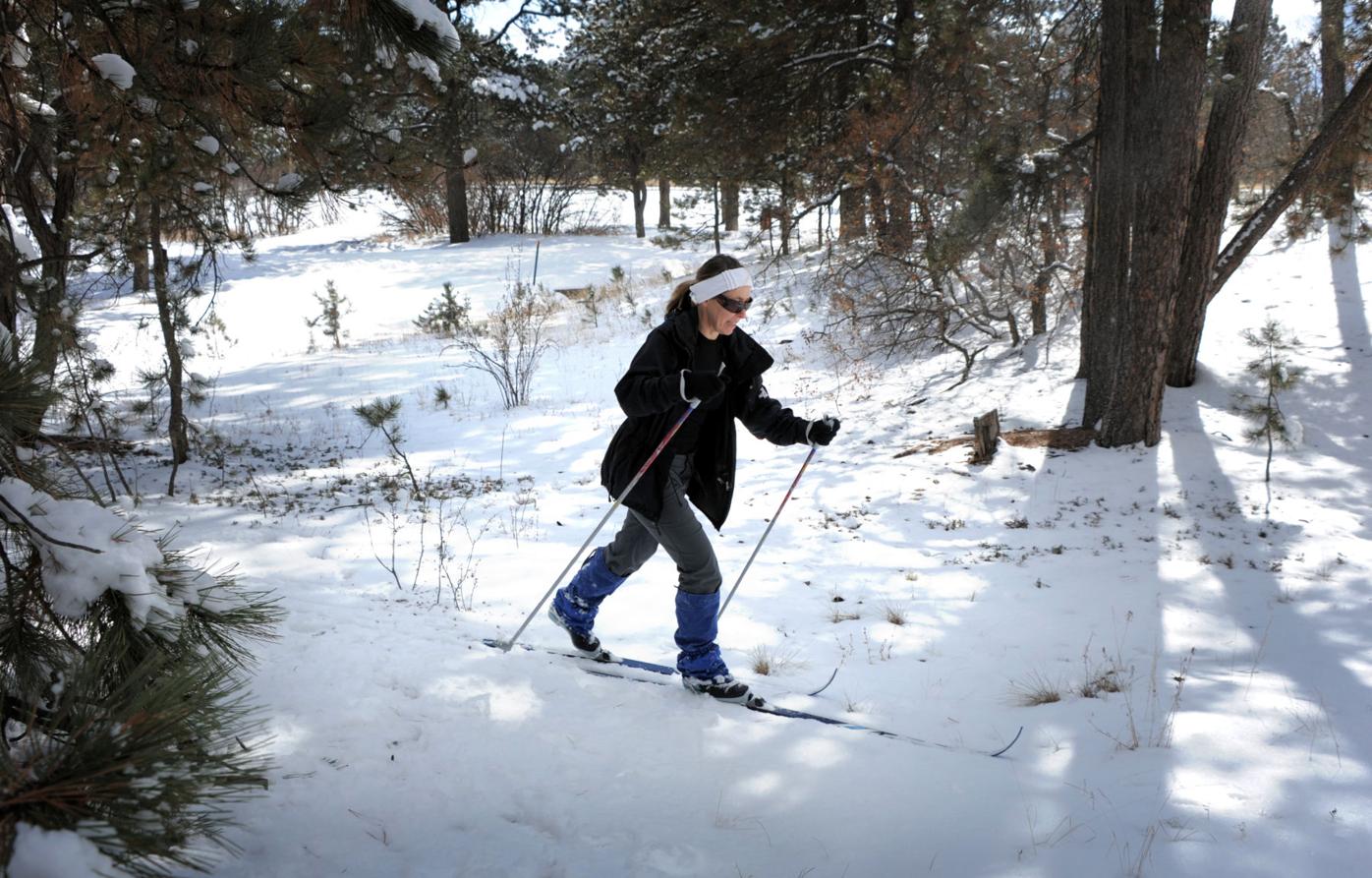 A cross-country skier in action at Fox Run Regional Park in Black Forest.

“Skate skiing” is generally a faster form of “classic skiing,” where the skis spread like a “V,” rather than stay parallel like an exaggerated walk in classic form.

In cross-country skiing, unlike in downhill skiing, the heels are free to move about.

A pair of skiers at Frisco Nordic Center in Summit County.

A pair of skiers on Vail Nordic Center’s groomed trails.

A warming hut glows during a backcountry tour as part of Crested Butte Nordic. For beginners, Nordic centers are a good place to learn the ways of cross-country skiing.

A cross-country skier in action at Fox Run Regional Park in Black Forest.

Starting in the early 1980s as a Denver University student, Dan Timm lived in Colorado for almost a decade before he discovered another side of skiing.

“Alpine skiing, you ride the lift and fly downhill, and it’s still fun and exciting,” he says from his home in Vail. “But yeah, I started to enjoy the exercise part of it more.”

The part that afforded him a full-body workout: arms and legs, skis and poles, collaborating for heart-pumping, sun-soaked kilometers of gliding through powder-glistening glades and meadows. That’s cross-country skiing, or Nordic skiing.

They’ve expressed love for other reasons. For the serenity and fresh air. For skiing minus the lift lines and injury risks. For the price ($50 for day pass and rentals at Vail Nordic, compared with the ski resort’s tickets closer to $200).

For many in the COVID-19 era, it is a newfound love.

“We have a number of people who are big runners and cyclists,” he says.

Just as much, he says parents with young children have found the activity on flatter, less crowded terrain to be physically and logistically easier to manage — the learning curve less steep, the parking hassles, shuttles and lines not applying. Meanwhile, Swenson says, skiers in old age have found a version of the sport that’s easier on their knees and joints and, at the same time, a better workout.

“The other thing I would attribute (growth) to is the improvement of equipment in the last five years or so,” says Josh Dayton, managing director at Breckenridge Nordic Center. “The equipment has gotten lighter, more stable and easier to use.”

If you’re joining the craze this winter, that gear is one thing to know. We asked for more tips and recommendations:

Between Nordic and downhill skis, the difference in binding is most obvious. In Nordic, the heels are free, mobile to navigate hills. Also, today’s Nordic skis are wider and shorter — “definitely easier to control,” Timm says.

The difference in boots is most felt. Rather than the rigid, clunky downhill contraptions, Nordic boots “fit like a comfortable sneaker,” Puckett Daniels says.

At least, they should. For many dissuaded newbies, “it all comes down to having the wrong equipment,” Dayton says.

“In a lot of cases, people are getting out on old, borrowed equipment that’s notoriously unstable and difficult,” he says, adding: “If you have a boot too loose or poor quality, it’s not gonna provide the stability you need and the control you need, and consequently, you’re not gonna have the fun you should be having.”

As for attire, “dress like you’re going for a run at that temperature,” Swenson says.

Be prepared to sweat and shed layers. Think windbreaker rather than heavy coat. Sweat-wicking, non-cotton midlayer, base layer, light-weight pants, hat and gloves.

“Gloves are one of the more important things,” Timm says. “You don’t want big, fat gloves that you can’t get a good, comfortable feel of the poles in your hands.”

Some local parks, open spaces and roads are suitable for starting out. Some trails on public lands are even groomed, packed down for skiing convenience. Think wide, flat, snow-covered paths out of avalanche zones and light on traffic.

“But a Nordic center is the most comfortable entry point to the sport,” Swenson says.

That’s for proper gear from the rental shop. And that’s for specifically designed trail networks: groomed and well-marked, so you know where you’re approaching flat greens, sloping blues and more technical blacks.

“Even if you’re an experienced downhill skier, start on the flats,” Puckett Daniels says. “I’ve been a downhill skier for 30 years, but the equipment is so different, and the skills you have from downhill skiing don’t immediately transfer.”

Most anyone can get to gliding on their own by starting on those flats, Swenson says. “What a lesson does is short-cut your time to proficiency,” he says — especially useful when it comes to learning the “herringbone,” a technique for ascending and descending hills.

A lesson teaches how to speed up and slow down, how to properly fall and get back up. And how to prevent bad habits.

“A lot of times people get out on the snow and their body tenses up,” Dayton says. “Focus on bending your ankles, keeping your hips forward, keeping your eyes up.”

Eyes up, so you don’t crash into someone else. Or something else. “If you see a moose, keep your distance,” Dayton says.

Classic skiing is advised for beginners: the straight forward movement where the skis stay parallel, rather than spread like a “V.”

Certain types might crave speed. “If they come from a background of ice skating, or hockey skating or even rollerblading, that’s beneficial,” Timm says. “Typically though, I would tell people to start with classic skiing.”