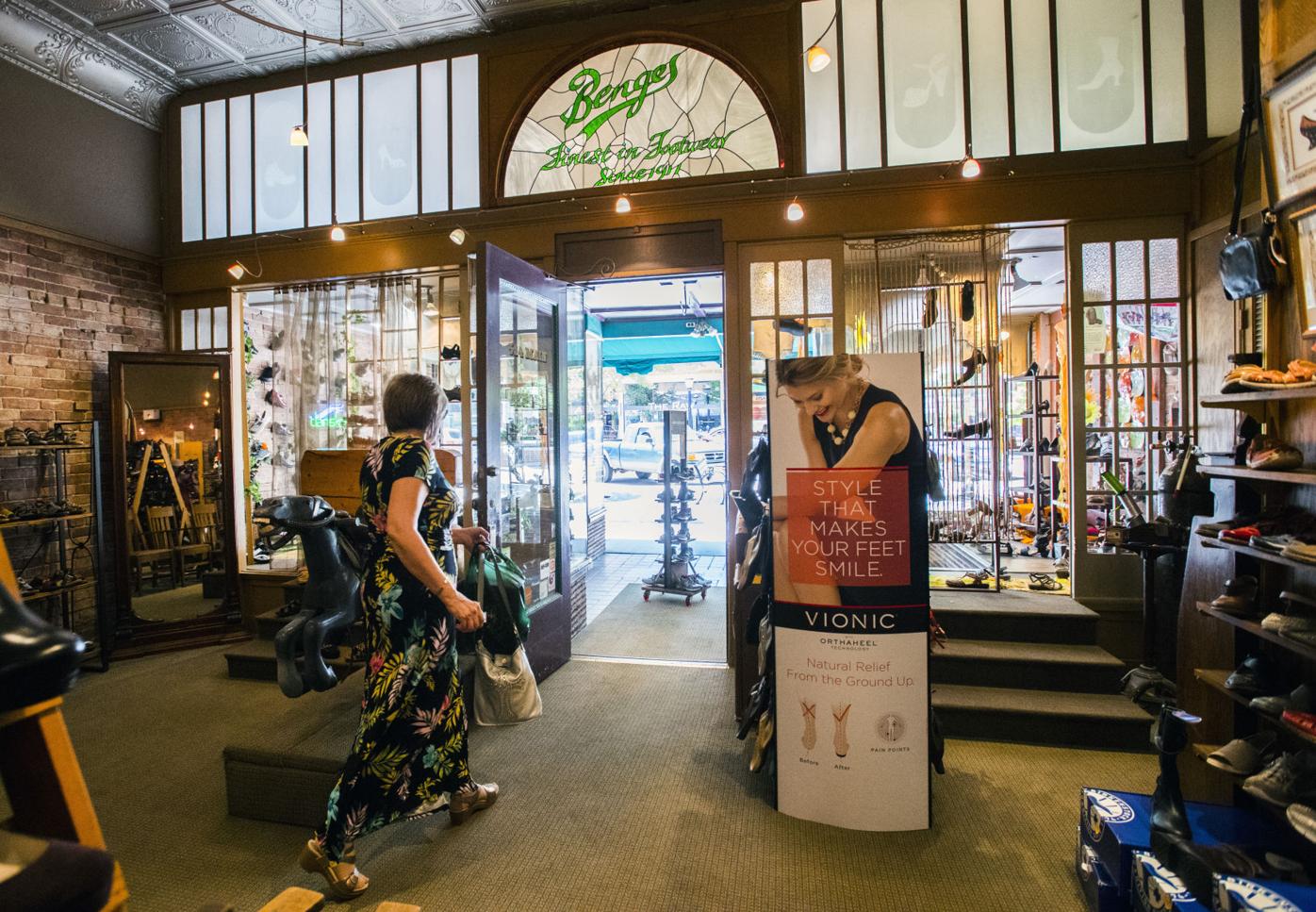 A customer leaves Benges Shoe Store in Grand Junction. The iconic retailer, which opened in 1911 on Main Street, is the oldest shoe store in Colorado. 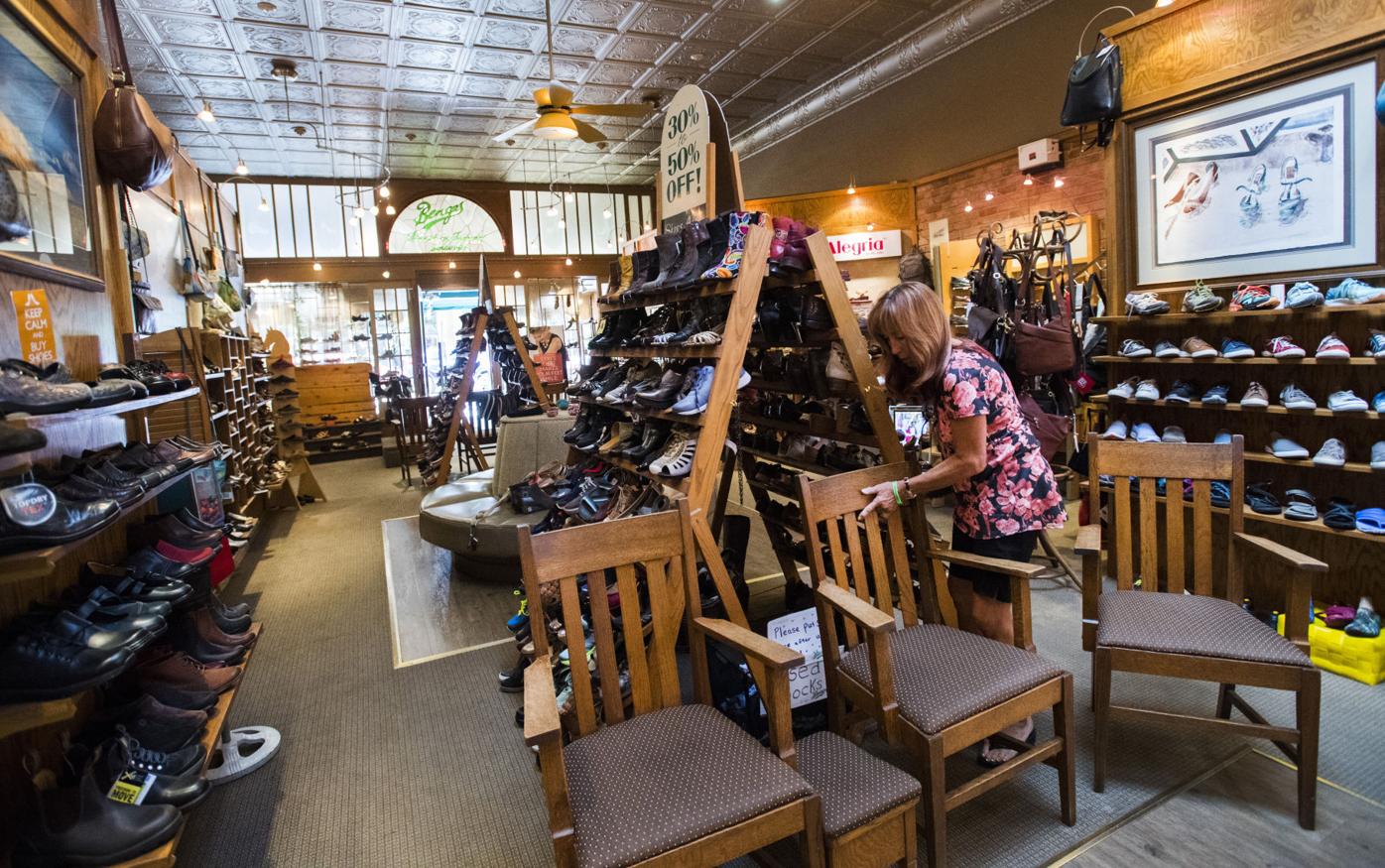 Vicky Cowan moves some of the original furniture from 1911 to retrieve some merchandice Monday, June 4, 2018, at the Benges Shoe Store in Grand Junction, Colo. (The Gazette, Christian Murdock) 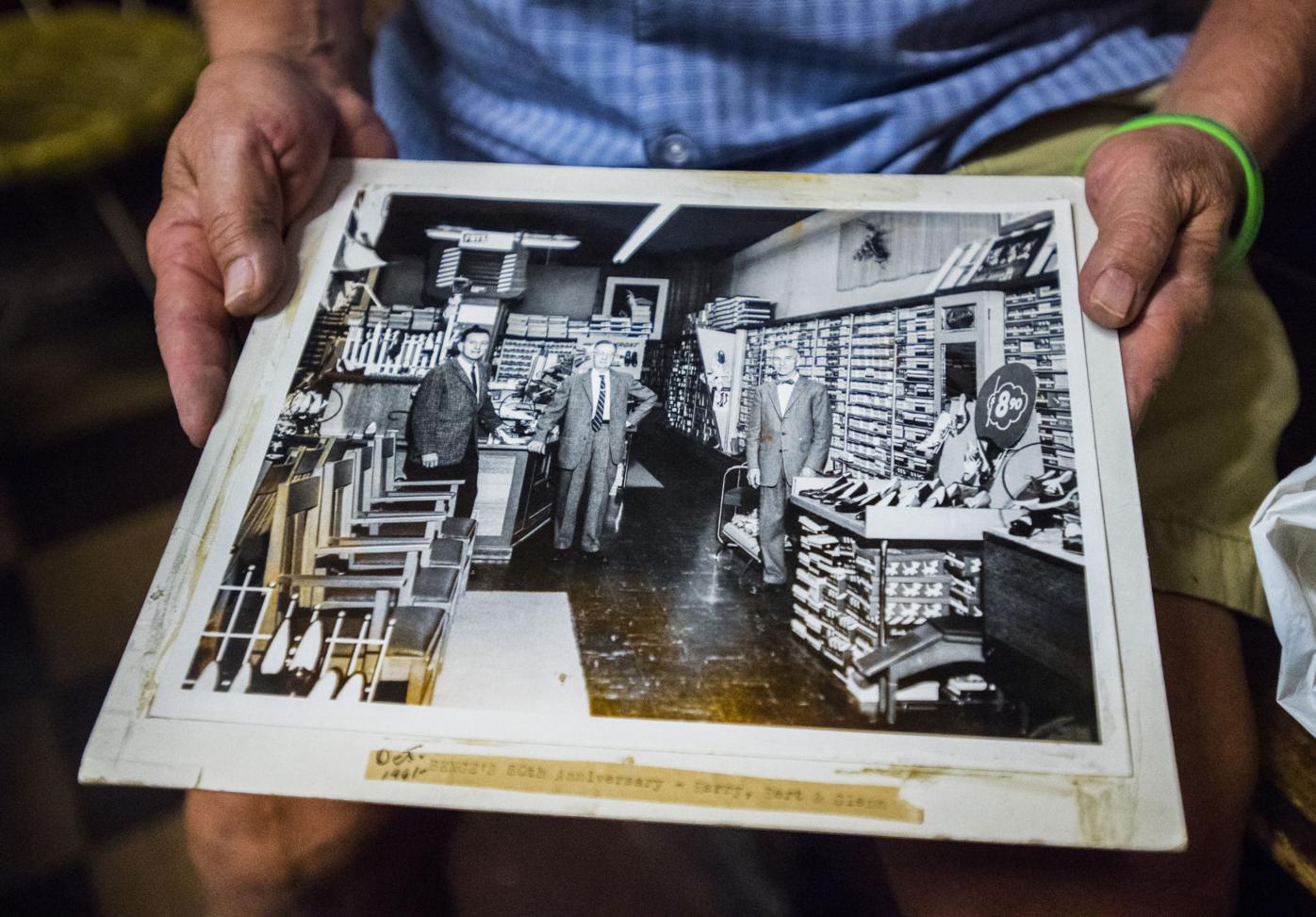 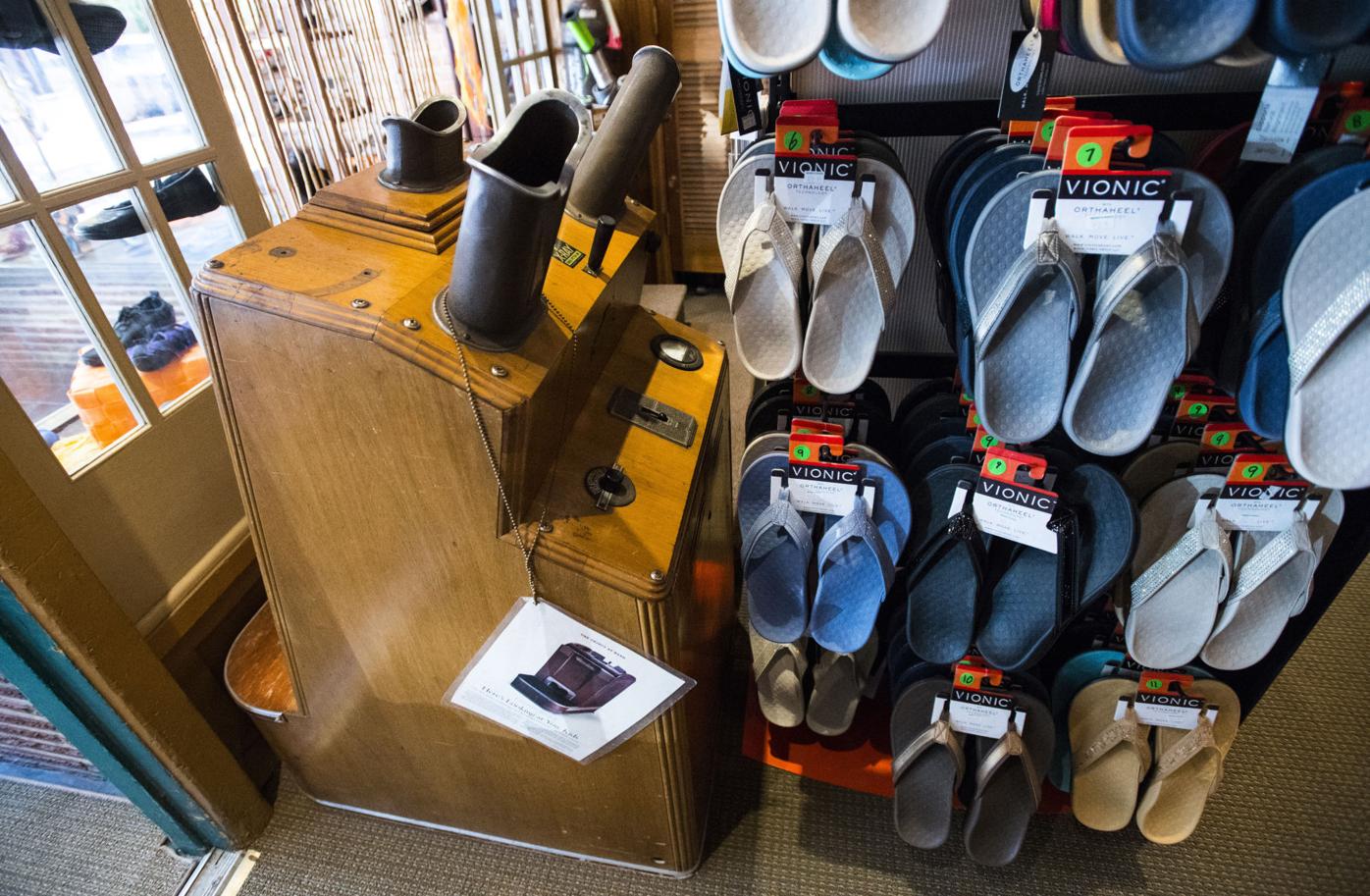 An old X-ray machine used to check the fit of a pair of shoe in pre-1960s sits next to modern flip flops Monday, June 4, 2018, in Benges Shoe Store in Grand Junction, Colo. (The Gazette, Christian Murdock) 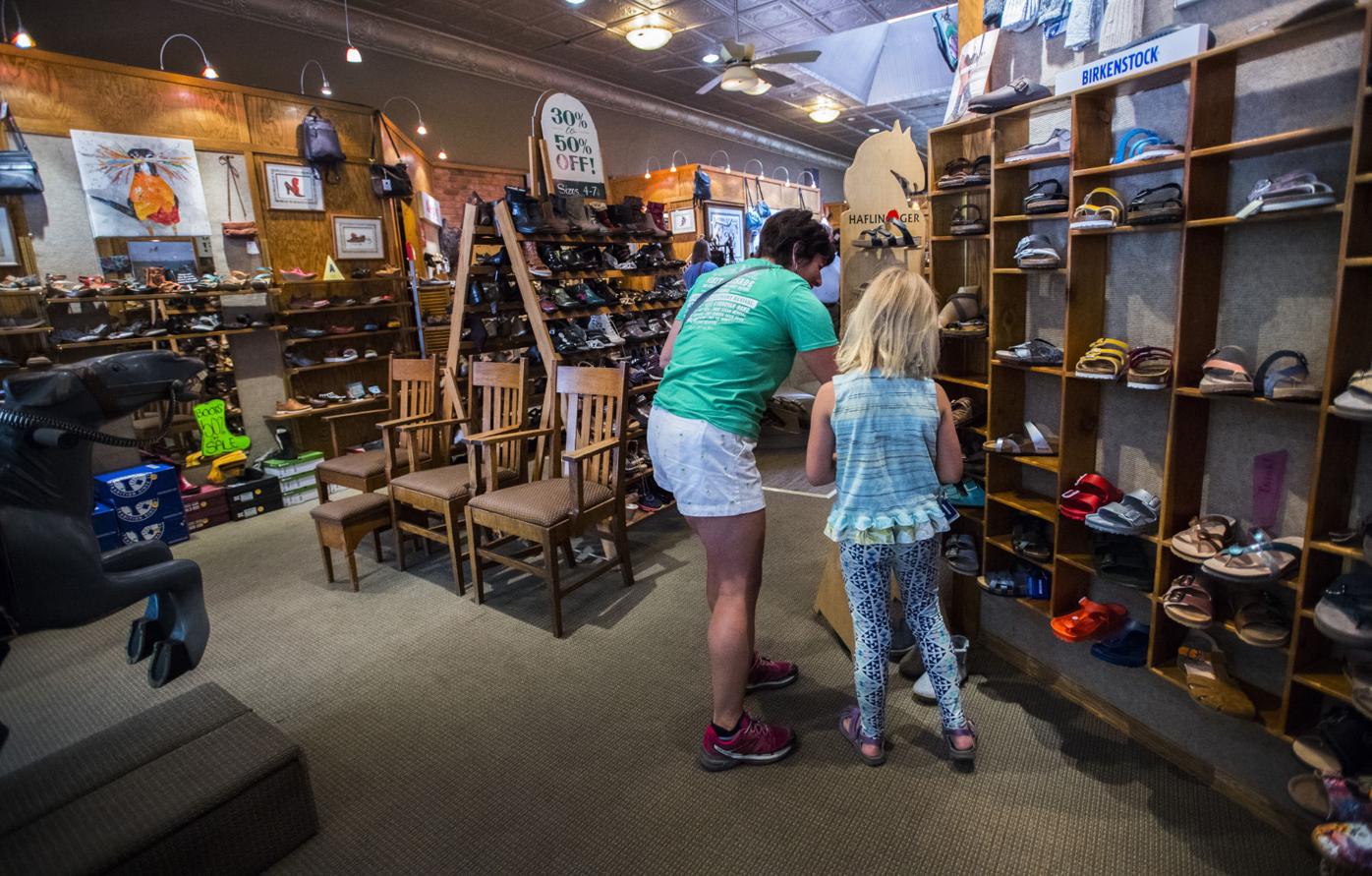 An old X-ray machine used to check the fit of a pair of shoe in pre-1960s sits next to modern flip flops Monday, June 4, 2018, in Benges Shoe Store in Grand Junction, Colo. (The Gazette, Christian Murdock)

GRAND JUNCTION - Bruce Benge ruffles through the clutter of the shoe store's back room, determined to find the picture.

"There's a lot of cleaning that has to happen," he says, "but it hasn't happened yet."

So he continues through stacks of old documents, boxes of long-used decorations and piles of way-outdated materials, such as the leather dye.

"Ah hah," he finally exclaims with a voice that is upbeat, cartoonish almost, prone to excited high pitches.

The sales team, including Bruce Benge’s father Harry Benge, left, and grandfather Bertrand Benge, center, poses for a picture on the Benges Sh…

He's found the picture. It's black and white and grainy, but not grainy enough to hide the pride in the two men standing in it: Bertrand Benge and his son, Harry, the first proprietors of Colorado's oldest shoe store.

"It's a testament to my grandfather and father," says Bruce, the third generation in this 107th year of Benges. "They were both here 50-plus years. I'm going on 43."

And for all that's changed inside the red-brick building on Main Street, most noticeable are the things that haven't.

A customer leaves Benges Shoe Store in Grand Junction. The iconic retailer, which opened in 1911 on Main Street, is the oldest shoe store in C…

Walk under the forest-green awning announcing "the finest in footwear since 1911" and look up at the tin ceiling that's never been replaced. See the wooden chairs that have seated Benges customers from the start. Spot the brass register with Bertrand Benge's initials - built for him in 1911 and only out of use for the past decade.

Now a modern register sits beside credit-card readers and sales tickets. "We handwrite all of our tickets. We're not scanning things or bar coding," says Bruce, proud owner of no cellphone. "We're very much old school, and it works."

It worked for his father, and as there is no heir apparent to the business, Benge will do it his way. His way also involves doing his own local TV spots, because he wouldn't want anyone to mispronounce the surname ("benj" not "benjee").

"We've been selling shoes in downtown Grand Junction for over 100 years," he says in the latest, his voice rising, "and then along came online shopping and the internet! We're still selling shoes."

Colorful Colorado: In Buena Vista, the old clashes with the new

Amazon is a formidable foe. While manufacturers keep retailers' shelves stocked, they also compete with online sales of their own.

Benge is 68, and while he feels a tug to retire, the tug to stay is stronger.

"This is where his family is," says Joanna Richards, who's worked at the store for 17 years and been visiting since childhood. She reflected on the Benges as if they were her own: "Every morning, I swear, a shoe will fall off, and I think it's Grandpa."

Bertrand Benge came from Iowa to Grand Junction in 1910 and welcomed a son to the world a year later, just as he was opening the store. The two kept up business through the Great Depression, through the years Harry was at war and through all the population changes that came with the area's energy booms and busts.

Father and son kept an optimism that Bruce Benge carries today. He and Cowan also wake to words displayed on the wall of their home: "Calm is a place you create in the midst of chaos."

Benge is comforted by his belief in the shoe store's enduring purpose. "It's touching, it's seeing, it's feeling," he says, sensations impossible in online shopping.

It's the friendliness, too. Harry Benge exhibited that in the store, though his son wasn't always there to see it. Bruce has heard the stories, such as one from a recent customer who recalled when the car carrying her and her mom broke down, and his dad lent them his.

Bruce wasn't always around because he didn't want to be. He graduated from college and traveled with the National Park Service. He made his way back to Benges as he tired of living out of a suitcase and making poor wages.

Vicky Cowan moves some of the original furniture from 1911 to retrieve some merchandice Monday, June 4, 2018, at the Benges Shoe Store in Gran…

He started at the store in 1975, and his dad stayed by his side until the day he died 11 years later.

To the old man, the store meant "everything," Bruce says.

"It was his family, his heritage," he says, wiping away tears. "He would be amazed by the changes in business today, I'm sure. He and my grandfather both would, yeah. But anyway ..."

Anyway, he's got to get back to work. There's cleaning to do, but it won't happen today. This back room will stay in its old, disheveled state, as will the basement, where on a dusty shelf rest shoes stocked by his dad and his dad's dad - long departed brands.