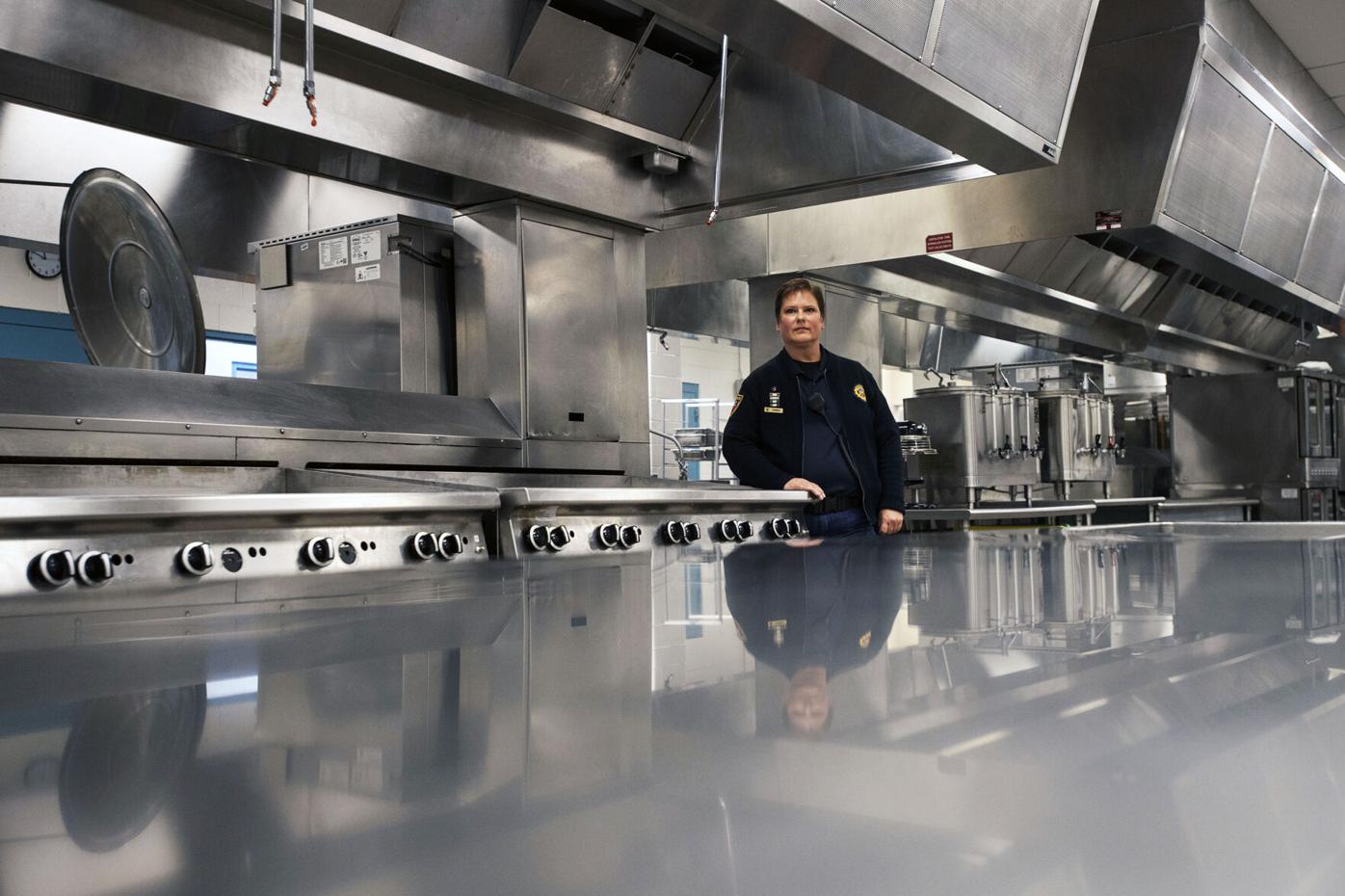 Andra Cirbo, who hold the title of correctional support trades supervisor III captain, poses for a portrait in the kitchen of the Denver Women’s Correctional Facility late last month In her job, she is part manager, part teacher and part mentor. 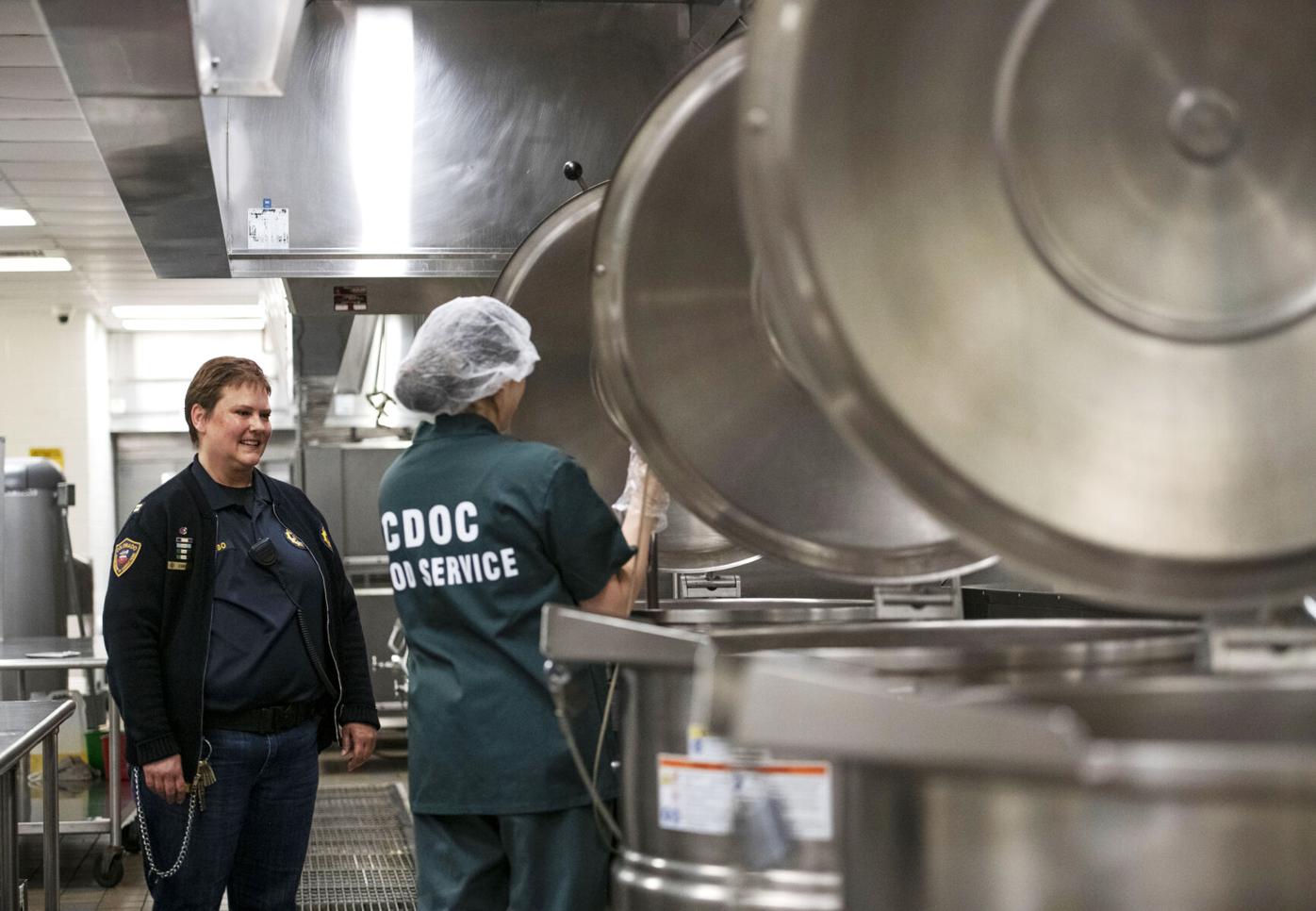 Andra Cirbo demonstrates her duties with an inmate in the kitchen of the Denver Women’s Correctional Facility in Denver, Colo., on Thursday, August 26, 2021. 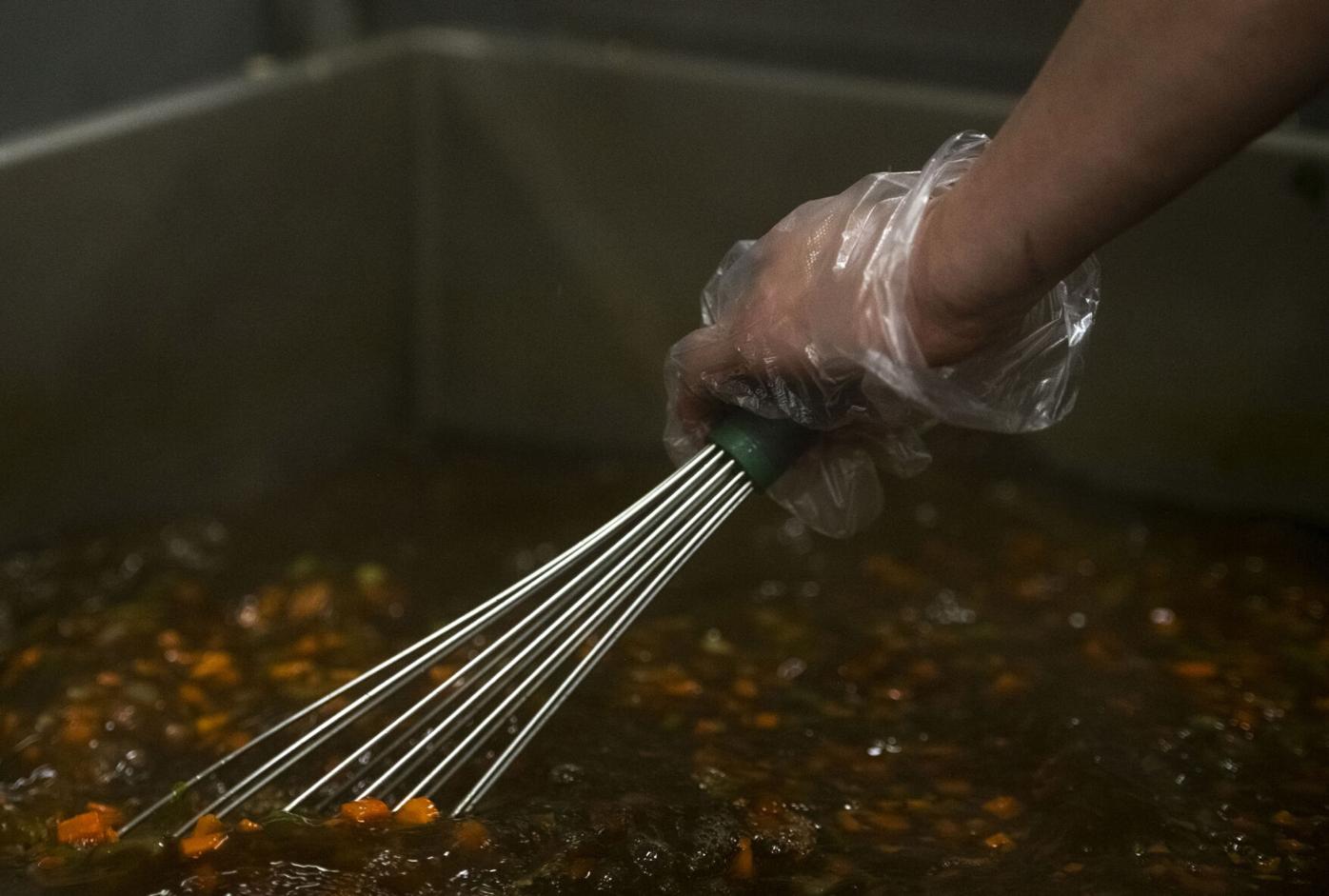 An inmate stirs soup in the kitchen of the Denver Women’s Correctional Facility recently. 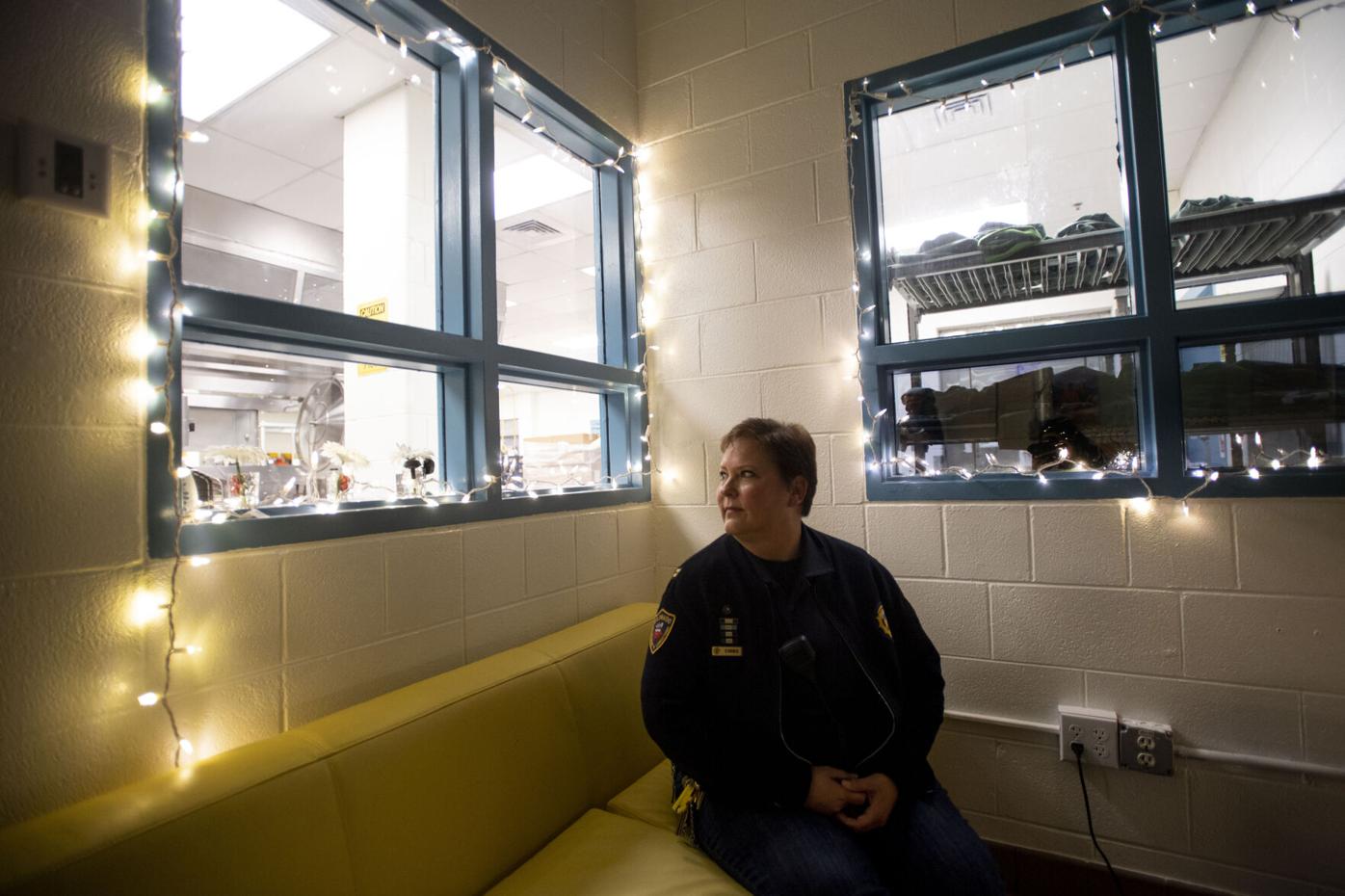 Andra Cirbo, Correctional Support Trades Supervisor III Captain, poses for a portrait at her office located in the kitchen of the Denver Women’s Correctional Facility in Denver, Colo., on Thursday, August 26, 2021. (Chancey Bush/ The Gazette) 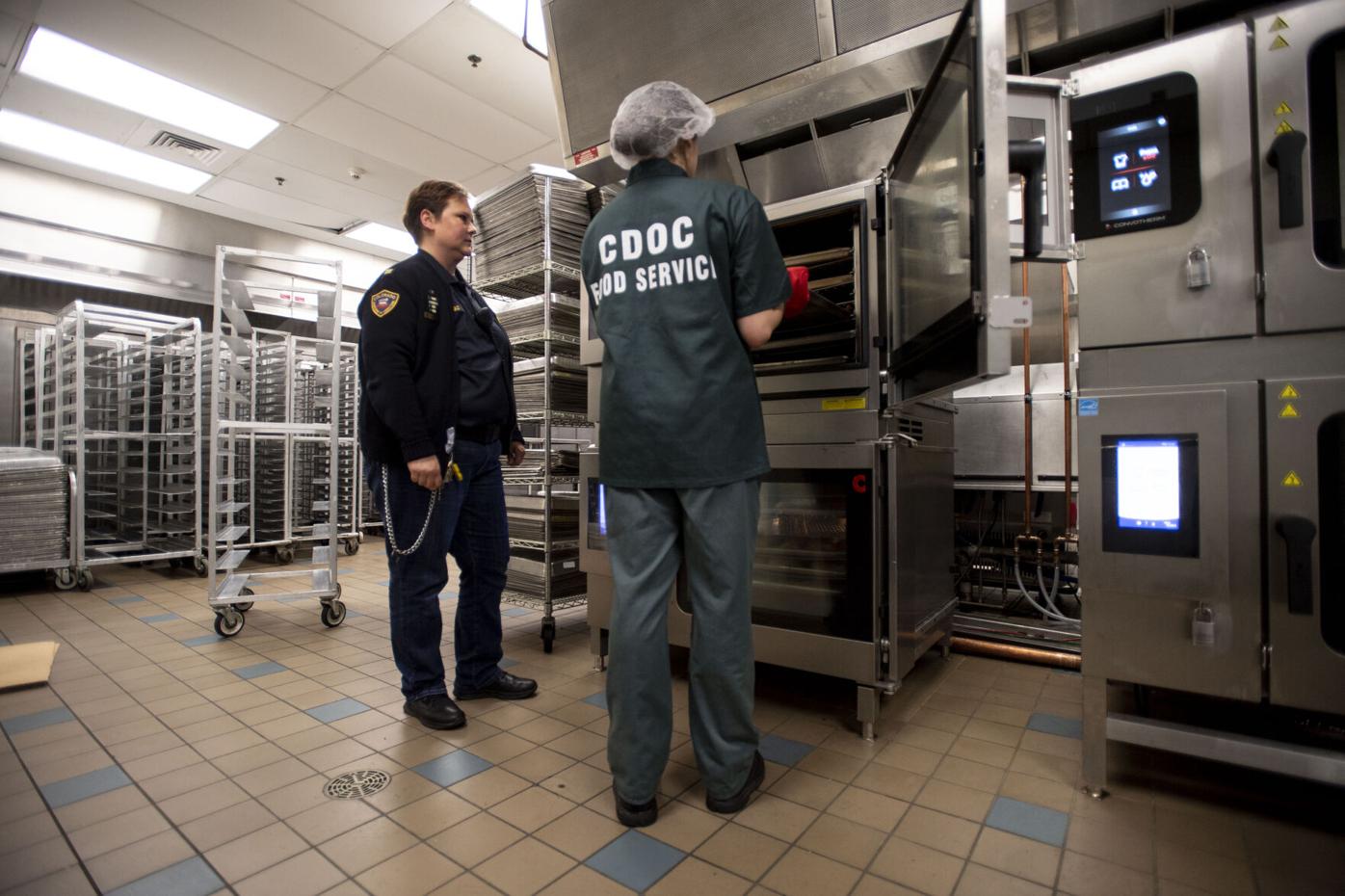 Andra Cirbo, Correctional Support Trades Supervisor III Captain, demonstrates her duties with an inmate in the kitchen of the Denver Women's Correctional Facility in Denver, Colo., on Thursday, August 26, 2021. (Chancey Bush/ The Gazette) 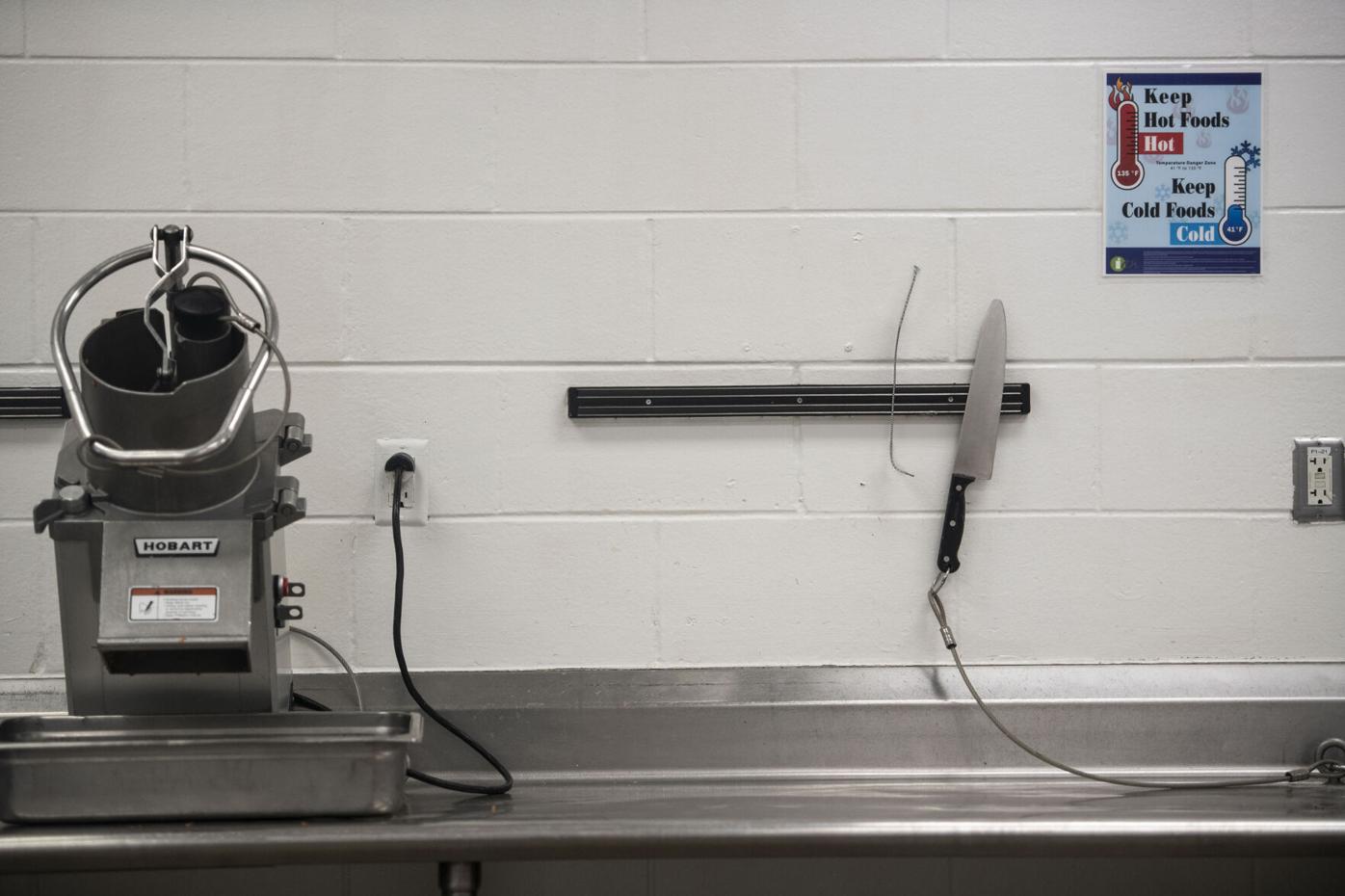 Knives are safely secured behind a locked door in the kitchen of the Denver Women's Correctional Facility in Denver, Colo., on Thursday, August 26, 2021. (Chancey Bush/ The Gazette)

Andra Cirbo, who hold the title of correctional support trades supervisor III captain, poses for a portrait in the kitchen of the Denver Women’s Correctional Facility late last month In her job, she is part manager, part teacher and part mentor.

Andra Cirbo demonstrates her duties with an inmate in the kitchen of the Denver Women’s Correctional Facility in Denver, Colo., on Thursday, August 26, 2021.

An inmate stirs soup in the kitchen of the Denver Women’s Correctional Facility recently.

Andra Cirbo, Correctional Support Trades Supervisor III Captain, poses for a portrait at her office located in the kitchen of the Denver Women’s Correctional Facility in Denver, Colo., on Thursday, August 26, 2021. (Chancey Bush/ The Gazette)

Andra Cirbo, Correctional Support Trades Supervisor III Captain, demonstrates her duties with an inmate in the kitchen of the Denver Women's Correctional Facility in Denver, Colo., on Thursday, August 26, 2021. (Chancey Bush/ The Gazette)

Knives are safely secured behind a locked door in the kitchen of the Denver Women's Correctional Facility in Denver, Colo., on Thursday, August 26, 2021. (Chancey Bush/ The Gazette)

Andra Cirbo had had enough of working in food service. She had been a restaurant manager for several chains and, with a baby at home, didn’t like the long hours. She decided human resources would be her next career.

But a job fair and a persuasive recruiter led her right back to food — at an unexpected job site: the Denver Women’s Correctional Facility.

That recruiter, Cirbo said, “didn’t want to offer me the position I had applied for, but one working in food service based on the positions I had listed on my resume. I told her ‘No, no, no. I want out of food service.’”

But the salary difference between the job she wanted and the one she didn’t, not to mention the 40-hour weeks with benefits and paid holidays, made her decide to give it a try.

That was in 2004. It has been 17 years now, and she hasn’t looked back. Her career as a correctional support trades supervisor III captain involves overseeing, with her co-captain, two huge kitchens that prepare and serve meals for up to 650 male and 1,000 female offenders in two maximum security facilities. She is part manager, part teacher, part mentor.

‘I was pulled to food service’

Cirbo’s food service path started at Burger King when she was 14.

“That was my first job,” she said. “My mom was a terrible cook, and I loved this job because I could eat hamburgers. My dad’s mother was a great cook. They (her grandparents) just lived down the block from us. I spent a lot of time with her. I still remember her apple pie. I miss it — it was perfect every time. She had a big kitchen and was always cooking.”

During high school, Cirbo participated in DECA, a career and technical student organization. Through the DECA program, students are placed in businesses to get experience and help them make career choices.

“I was placed in retail at a May D&F store,” she said. “I really didn’t like it. It was like cleaning up my room all the time, picking up clothes in fitting rooms. It wasn’t satisfying.”

In 1987 she competed in a DECA competition under the category “Quick Service Restaurant” — and won. After that, she said, “I was pulled to food service.”

Not long after college, she got a job at Wendy’s International at a training store and was soon promoted to general manager. She learned food prep, production, customer service, food quality, inventories and scheduling techniques.

“The training store was so rewarding,” she said. “I found I liked teaching people and seeing them grow. I was maturing as a person and as a manager too.”

After six years of long hours, though, she was ready for a change. She became a service manager at Country Buffet, where she worked from 2000 to 2004. She worked in the front of the house because she liked doing food presentation.

“With that huge salad bar at Country Buffet, I loved making everything look pretty — and interacting with customers,” she said.

It’s no wonder that the correctional facility’s recruiter knew Cirbo would be the perfect fit that fateful day. Before starting at the prison, she had to attend the Basic Training Academy held at Holy Cross Abbey in Canon City. Always an excellent student, she scored 100% on all her tests.

“I lived there for a month,” she said. “My husband at the time took care of our 13-month-old daughter. I called her every night at bedtime and sang ‘Jesus Loves Me.’”

Her 17 years working in the corrections system started as a correctional support trades supervisor I (sergeant) where the job duties included supervising offenders directly in their day-to-day tasks as well as completing daily paperwork.

“On a typical shift, I would have about 10 offenders that were assigned to me in a certain area of the kitchen,” she said.

Her next promotion was to correctional support trades supervisor II (lieutenant), which included supervising sergeants.

“I was responsible for making sure they were following policies and procedures,” she said. “I audited their paperwork and also had some additional administrative duties. I was in the role of training and mentoring staff as they supervised the offenders.”

In her current rank of captain, she supervises lieutenants.

“I ensure they are managing the day-to-day operations of the kitchen through their sergeants,” she said. “I train and mentor them on how to train and mentor staff. I have a largely administrative role in scheduling, maintenance, training, inspections, maintaining budgets, and auditing systems and policy compliance. With my office in the kitchen, I have daily opportunities to continue to interact with the offenders as well.”

“It’s very rewarding work,” Cirbo said. “The offenders are making a transition from civilian life to being an inmate. Many haven’t worked. My staff and I teach them tasks to show them what a good job looks like and how to work with someone they may not like. If they have done drugs, they may be mentally challenged. Many are younger than their age.”

Cirbo is particularly excited about the apprentice program offered there. It is offered through the Department of Labor.

“Offenders have to interview at some facilities to get accepted into the program, but the female offenders at our center tend to have shorter sentences. So we don’t have many applicants due to the length of the program,” she said.

There are a few who do apply for the Culinary Arts Program. To be accepted as an apprentice, they must have an approved sponsor who also must apply to the program and be approved.

“I have one woman who is in the apprentice program who has great potential,” she said. “She is focused on baking and has a business plan for when she completes her sentence. Her grandmother has a successful pizza business in Canon City. The grandmother is buying the space next door to her pizza shop for her granddaughter to open her bakery.”

Cirbo can cite many who have mentored her through her progression of positions at the facility. Rosa Frayer, the Colorado Correctional Center manager, is one of them.

When it comes to leadership, Frayer says, “Captain Cirbo practices a ‘personal touch’ leader style. She interacts frequently with all her staff as well as the offender workers. She makes the time to get to know people as individuals. She provides opportunities for people to show their strengths while coaching them through opportunities. She knows food service operations well and it shows. She leads by example.”

During this year of challenges with COVID-19, Cirbo has battled a very aggressive form of breast cancer. Not one to complain, she has been able to continue working.

Frayer is quick to show her admiration of Cirbo’s work ethic.

“Aside from COVID, the past year was extremely challenging for her due to personal reasons,” Frayer said. “I was in admiration to see her come to work each and every day knowing that it required extraordinary strength and effort on her part.”

How to bake a whole chicken wrapped in clay | On Food

Lawrence Morgan, Cirbo’s former supervisor and co-Captain, has nothing but praise for Cirbo’s leadership, work ethic and spunk.

“She is a real go-getter,” he said. “She is fair but strong. She is not afraid to try something new to better the work situation for her staff and to also better her staff. She is truthful and will give 110%. Her yes means yes and no means no, even when it is uncomfortable.”

But it was her spunk that gets his highest compliments.

“I asked her in her interview where she saw herself in five years,” he said. “She told me, with a smile, that she wanted my job in five years. She challenged me as her supervisor and always wanted to make the work environment better for the staff and offenders.”

Question: What are 10 words to describe you?

Q: What's your most undervalued ingredient?

Q: Is there one food that you detest?

Q: What's one food you can't live without?

Q: What was your most embarrassing moment in the kitchen?

A: I prepared a dish for a foodie group gathering and used salt instead of sugar

Q: Who is your favorite celebrity chef?

Q: What is the hardest lesson you've learned?

A: Never try a new recipe for a group

Q: What is the best food city in America?

Q: If you're making an omelet, what's in it?

A: Omelets are a waste of a delicious egg

Children, especially infants and toddlers, not only need snacks to maintain a healthy diet but also to ensure healthy brain development.