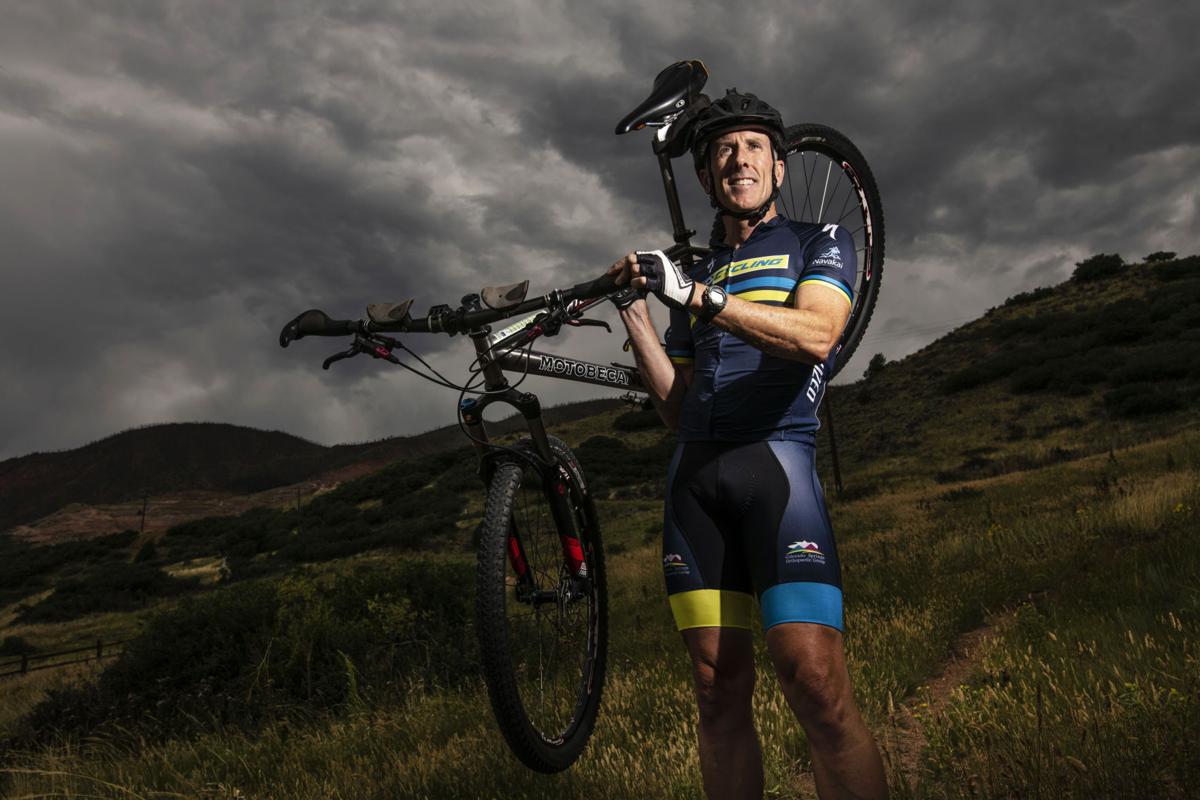 Todd Murray, 56, will be competing in the Leadville Trail 100 Mountain Bike Race for the 26th time Saturday. He has ridden in every edition of the grueling race, and his daughter, Lauren, will be riding in it for the first time. 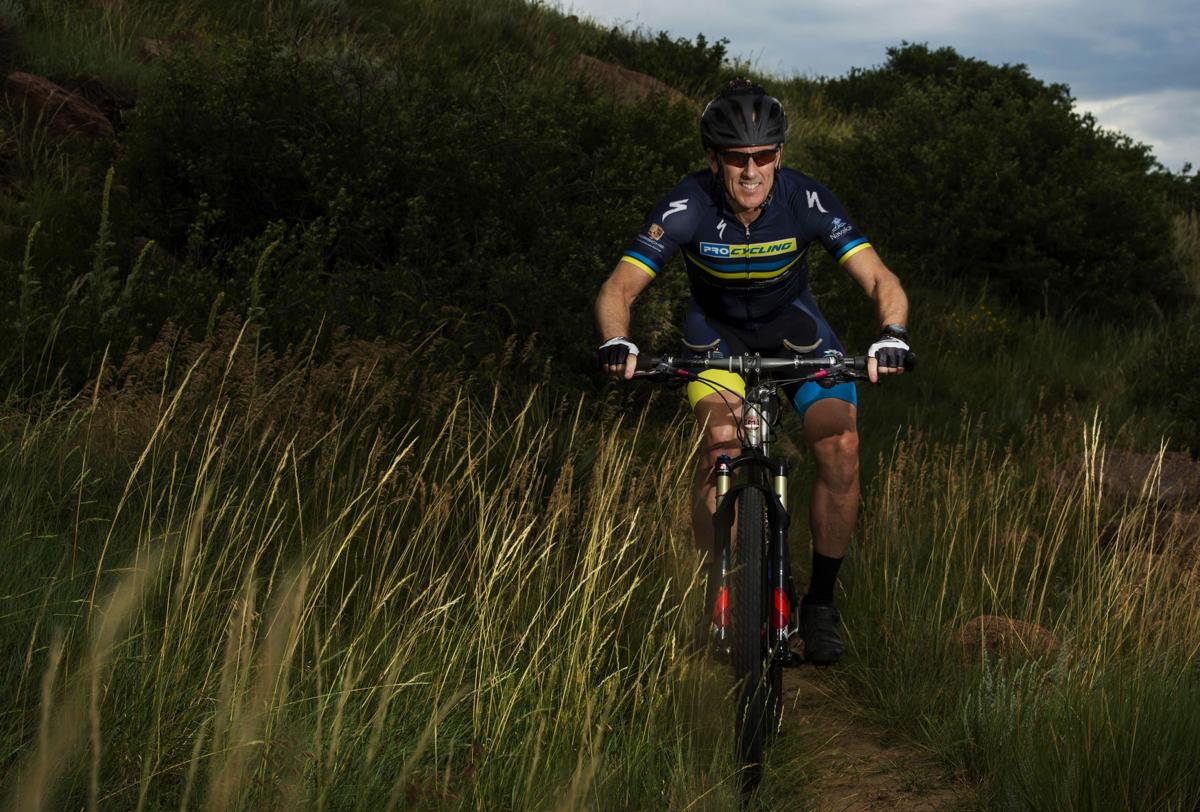 Todd Murray, 56, will be competing in the Leadville Trail 100 Mountain Bike Race for the 26th time. The race starts at 10,152 feet and climbs to 12,424 feet through rugged terrain. 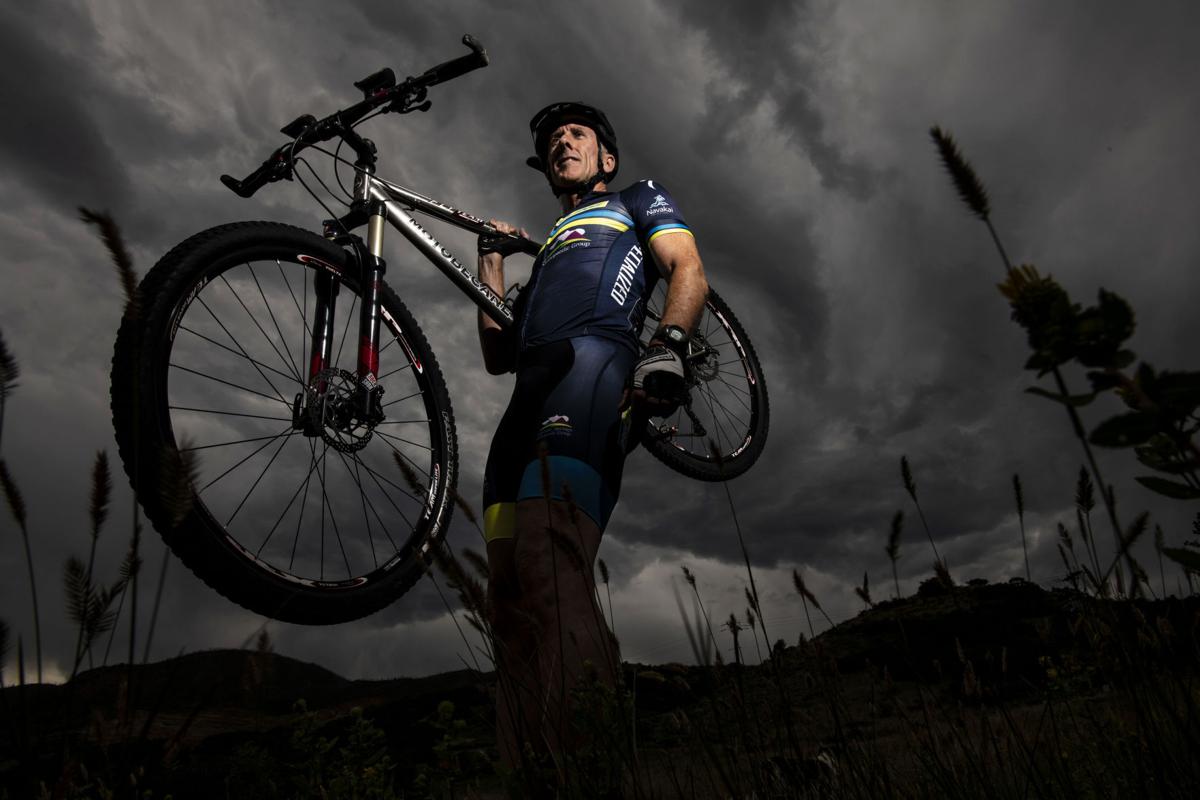 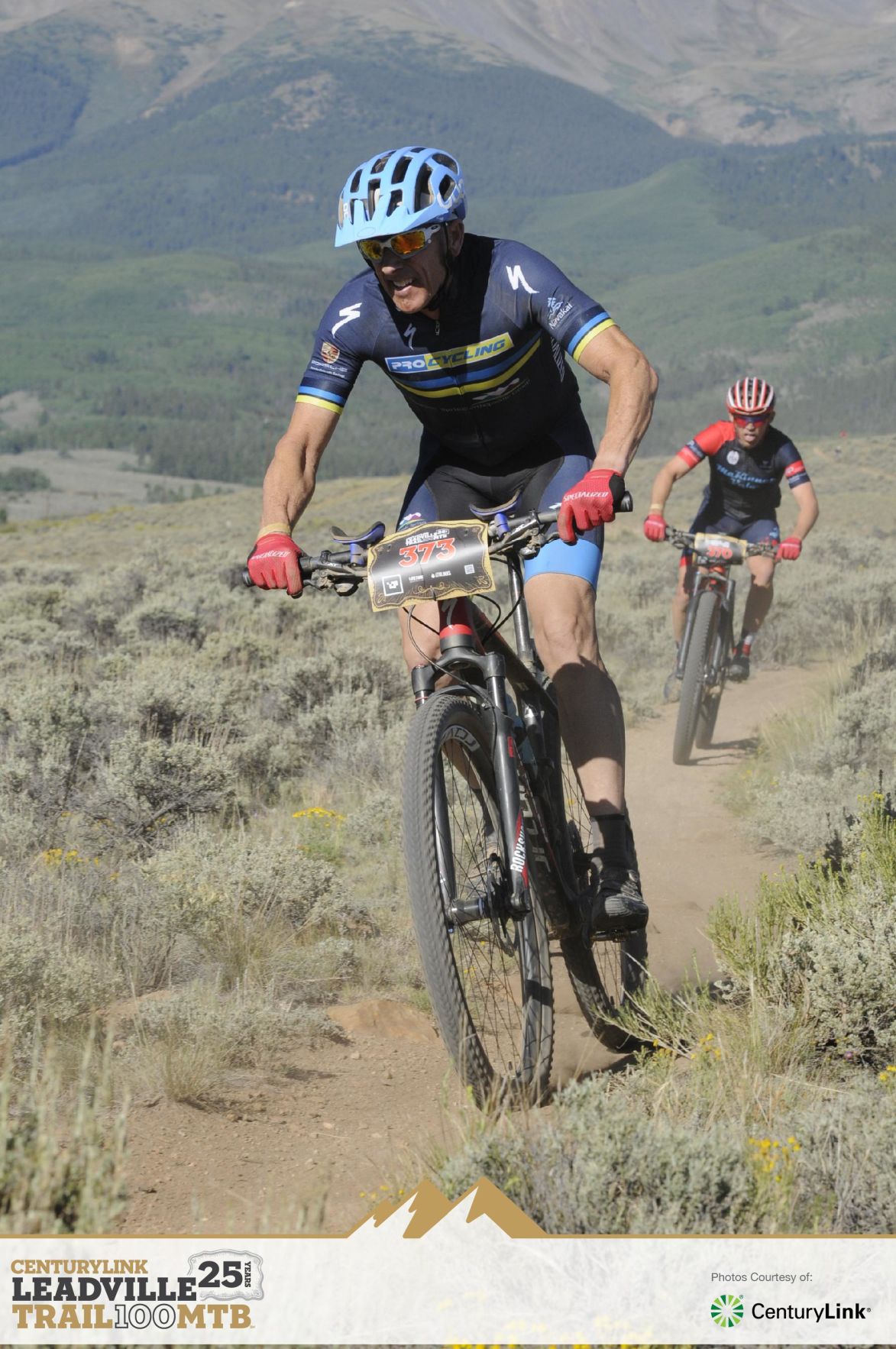 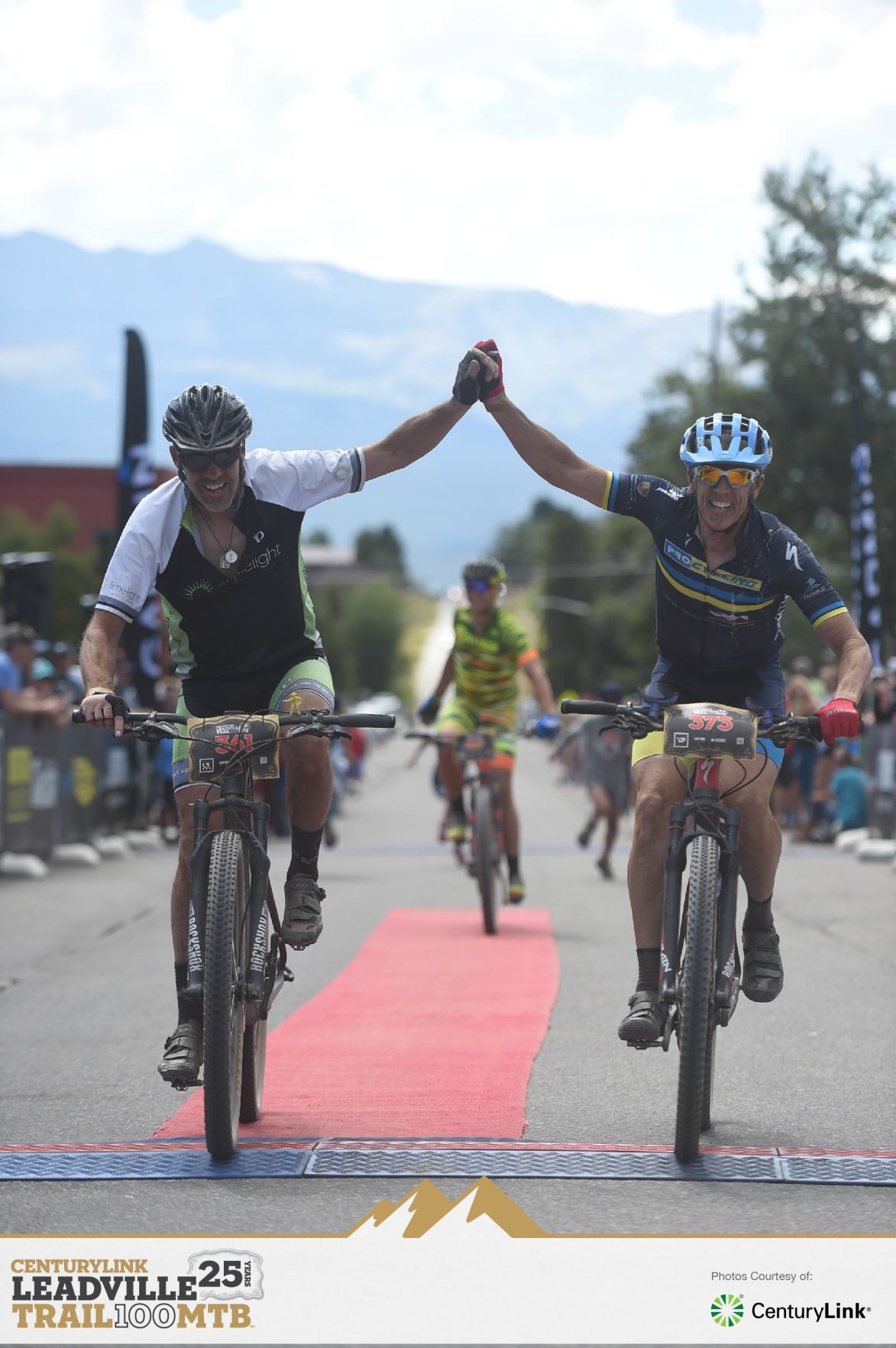 Colorado Springs’ Todd Murray, right, finishes last year’s Leadville Trail 100 Mountain Bike Race with Aspen’s John Callahan. The two are the only ones to finish every installment of the race going back to 1994. Photo courtesy Leadville Trail 100

Todd Murray, 56, will be competing in the Leadville Trail 100 Mountain Bike Race for the 26th time Saturday. He has ridden in every edition of the grueling race, and his daughter, Lauren, will be riding in it for the first time.

Todd Murray, 56, will be competing in the Leadville Trail 100 Mountain Bike Race for the 26th time. The race starts at 10,152 feet and climbs to 12,424 feet through rugged terrain.

Colorado Springs’ Todd Murray, right, finishes last year’s Leadville Trail 100 Mountain Bike Race with Aspen’s John Callahan. The two are the only ones to finish every installment of the race going back to 1994. Photo courtesy Leadville Trail 100

Todd Murray has done his calculations.

The spreadsheet is on his kitchen table — split times of 14 cyclists with sub-12-hour finishes at last year’s Leadville Trail 100 Mountain Bike Race, averaged out and divided across 10 checkpoints along the high-altitude course. This will serve as a guide for Murray and his daughter, Lauren, as they ride this Saturday.

The race is nothing new to Murray; the Colorado Springs man has finished all 25 installments going back to 1994, just one of two to do so.

But this will be a first for Lauren, 22. And her dad is emphasizing that 12-hour time, because 12 hours is the cut-off.

Naturally, she’s feeling the pressure. “I almost wish that people didn’t know him at all,” she says.

But no, amid the expected field of 1,200-plus riders, she won’t exactly be able to hide in her Leadville debut. Eyes will be on her as they’ll be on her dad, watching to see if the 56-year-old can keep up his miraculous streak.

That’s what race founder Ken Chlouber calls it. “It’s gotta be miracle status,” he says. After all, he notes, any number of complications could’ve prevented the record: scheduling conflicts, mechanical malfunctions on the trail, physical or mental snags.

“If you figure what would be the odds of that,” Chlouber says. “What, less than 25 percent don’t finish every year, easy. And for one guy, time after time, I mean, just considering the human factor there and how many times he had to just dig deep and keep digging with everything hurting, and he went on and pushed through the pain and sickness or whatever.

“Yeah, he is the Leadville Trail 100 Mountain Bike Superman.”

Murray shares the title with Aspen’s John Callahan, the other 25-time finisher. Only eight own the biggest belt buckle the event has produced for the 20-race club: gold-plated and representing 2,000 miles achieved. That’s one in Murray’s buckle collection. Twenty-two others are the coveted prizes for finishes in under nine hours.

You might think the collection would give him some sense of pride, the shiny fruits of his labor.

It’s something he keeps telling Lauren: “Leadville is just one day, and it is like the payday. But really, the training that goes into it is the payoff. That’s the fun part.”

What does that mean for Colorado Springs' Todd Murray, who's ridden every race going back to 1994? More than 2,500 miles covered and 315,000-plus feet of elevation gained.

Fun is what he says keeps him coming back to Leadville. And fun is indeed what it looks like in pictures on his kitchen wall. He and Callahan, close in age and stamina, don’t look like rivals in one frame: They have their arms around each other, smiling for the camera after claiming last year’s milestone side by side.

Home from work as a detective with the Colorado Springs Police Department before heading out on his bike, Murray listens to the playful neighborhood kids. “Even at 56, you get the same feeling,” he says. “This is so much fun.”

He was one of those kids once, zipping around in San Jose, Calif. His family moved to Colorado Springs when he was a junior in high school, and Air Academy was where he found his first competitive love, for swimming. He swam at Fort Lewis College and then transferred to Colorado State University, where he caught the triathlon bug. He did several before his first Ironman in 1992.

Around that time, he’d been running trails with Jim Butera, considered a founding father of the Leadville 100 foot race. Butera told Murray of the mountain bike version on the way.

The first big buckles were going for under eight hours. No problem, Murray thought.

He clocked in at nine hours and 25 minutes and felt a twinge of defeat. “I was hooked.”

Which was strange to the woman he married a month after the race. “I seriously had no clue,” Lisa says now. “I still don’t know.”

And she’s still with his crews at Leadville’s aid stations every year. Every now and then, she’s still trying to talk him out of it. “Sometimes,” she says, “I’d like him to branch out and be open to having more free time.”

But he can’t just sit around and let the stress of work fester. Training is his relief at the end of the day, and he’s got training to do all right. He’s got a reputation to uphold.

Weary or not, he rides at least five days a week. After work, he might hit Woodmen Road for some interval climbing. Or he might churn up hills close to home or spin in his basement. North Cheyenne Cañon is his preferred ground for weekends, covering dozens of miles of trail on five-hour forays. On longer days elsewhere — recently it’s been at Leadville’s course with Lauren — he’ll rack up 10,000 feet of elevation gain.

“He has an insane amount of motivation,” Lauren says from her post-college home in Fort Collins. “Like, it’s unnatural. I had moved home for a little bit after I graduated, and it was like training camp. Every single day we were doing something.”

Once, in 2014, she saw him devise his own hand cycle and “go crazy” on it while mending a labrum in his hip that needed replacing (Murray delayed the surgery until after Leadville). Three years prior, he had broken three bones in his foot and somehow managed to complete his first and last (he swears) Leadman, a combination of running and biking challenges amounting to 282 miles. Last year, a broken scapula didn’t keep him from finish No. 25.

And he doesn’t intend to be stopped this year, what he calls the most meaningful for him because of Lauren. The most meaningful since 1997, when he pedaled alongside his dad, who was 71 at the time. Yes, Murray had to go ahead to ensure the 12-hour finish (and yes, he’s prepared to do so again this weekend).

At the end, the old man was rewarded with a bottle of whiskey.

“My dad said, ‘Todd, when you’re my age and finish this race, we’ll crack the bottle and celebrate together,’” Murray says. “I don’t know if I’ll still be doing this when I’m 71. But you never know.”

From his local post at Angler’s Covey, the guide has gone on to international acclaim for his unorthodox approach to fly fishing. The industry knows very few who’ve built a platform as he has, heralding the secrets of bugs to be the answer to better fishing. People know the Bug Guy, but do they know Robert Younghanz?