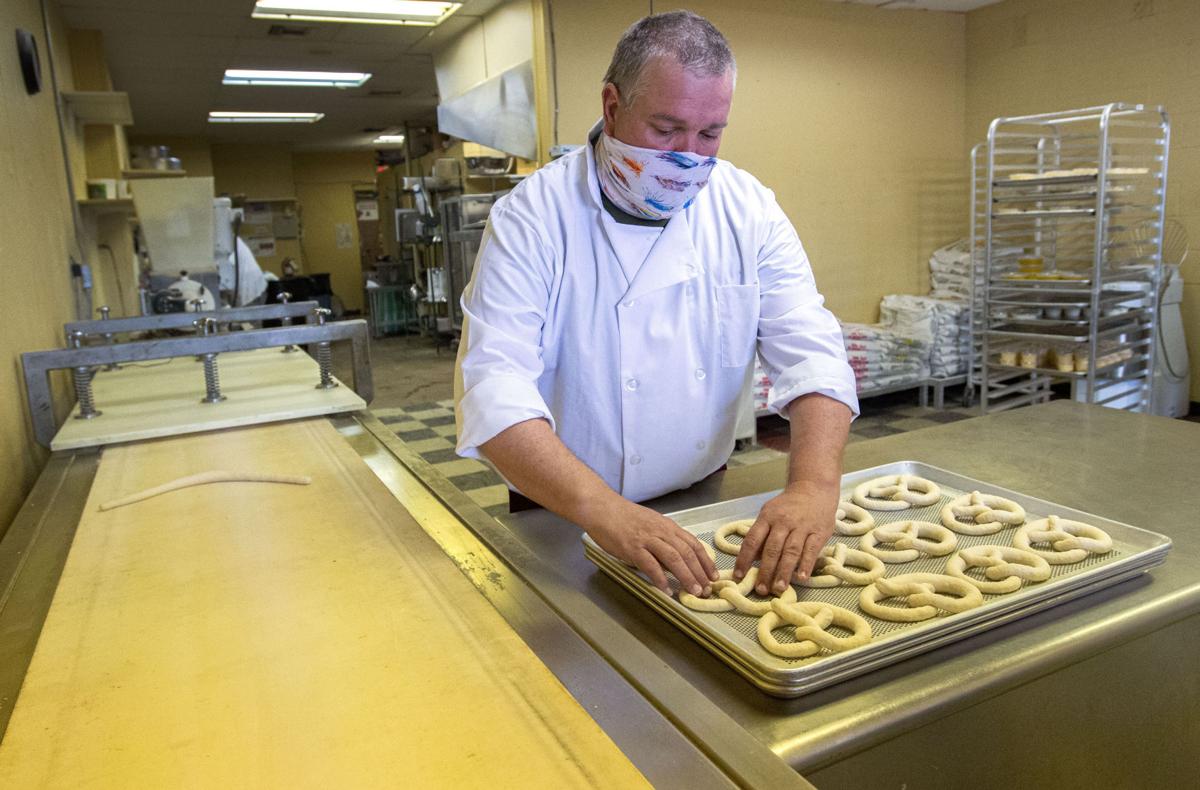 Mark Anthony Bryant places tied pretzels on a tray as another one rolls out of the pretzel machine at his shop, Mark Anthony’s Pretzels, in Colorado Springs. 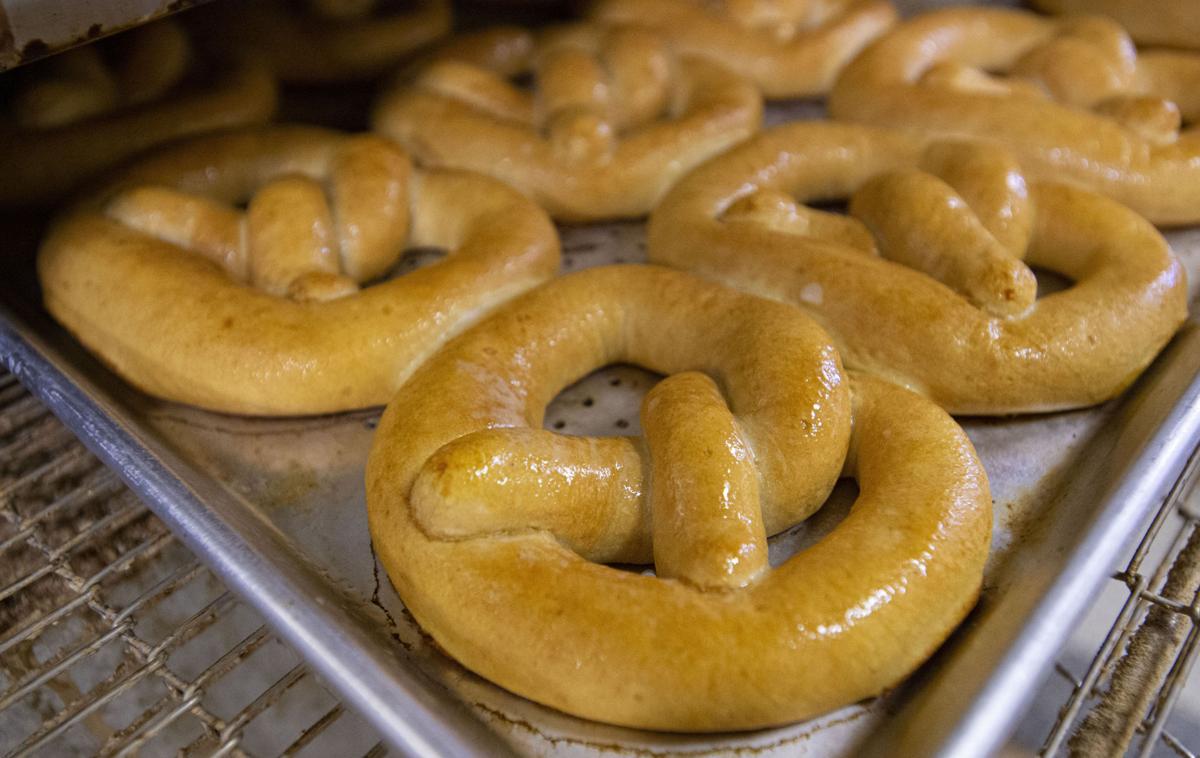 Warm pretzels roll out of the oven at Mark Anthony’s Pretzels in Colorado Springs Thursday, April 30, 2020. 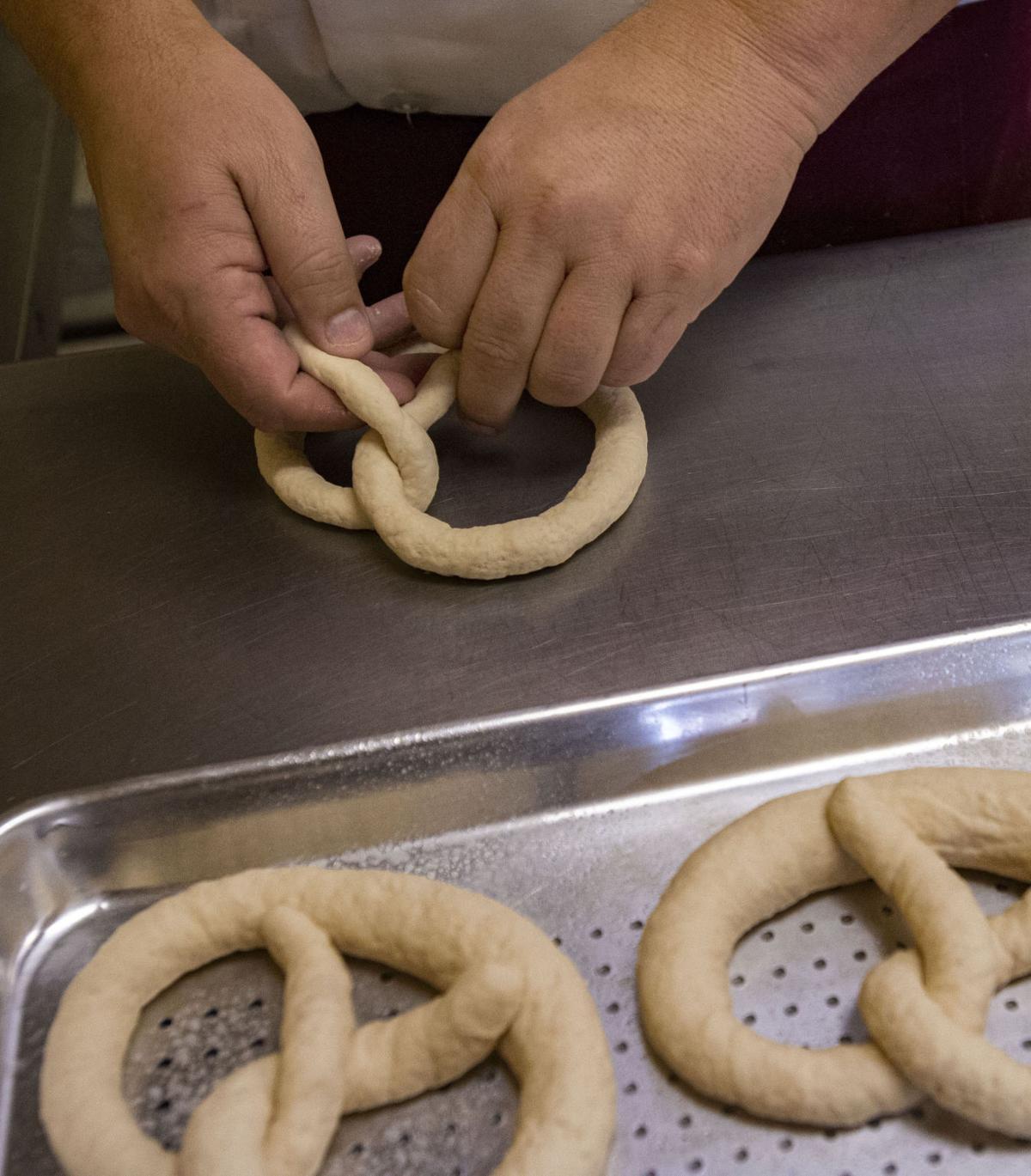 Mark Anthony ties a pretzel Thursday, April 30, 2020, at his shop in Colorado Springs. Mark Anthony’s Pretzels sold his pretzels solely to restaurants including Phantom Canyon and Bristol Brewery before the coronavirus shut down inside dining. He now sell his pretzel online for takeout or delivery. 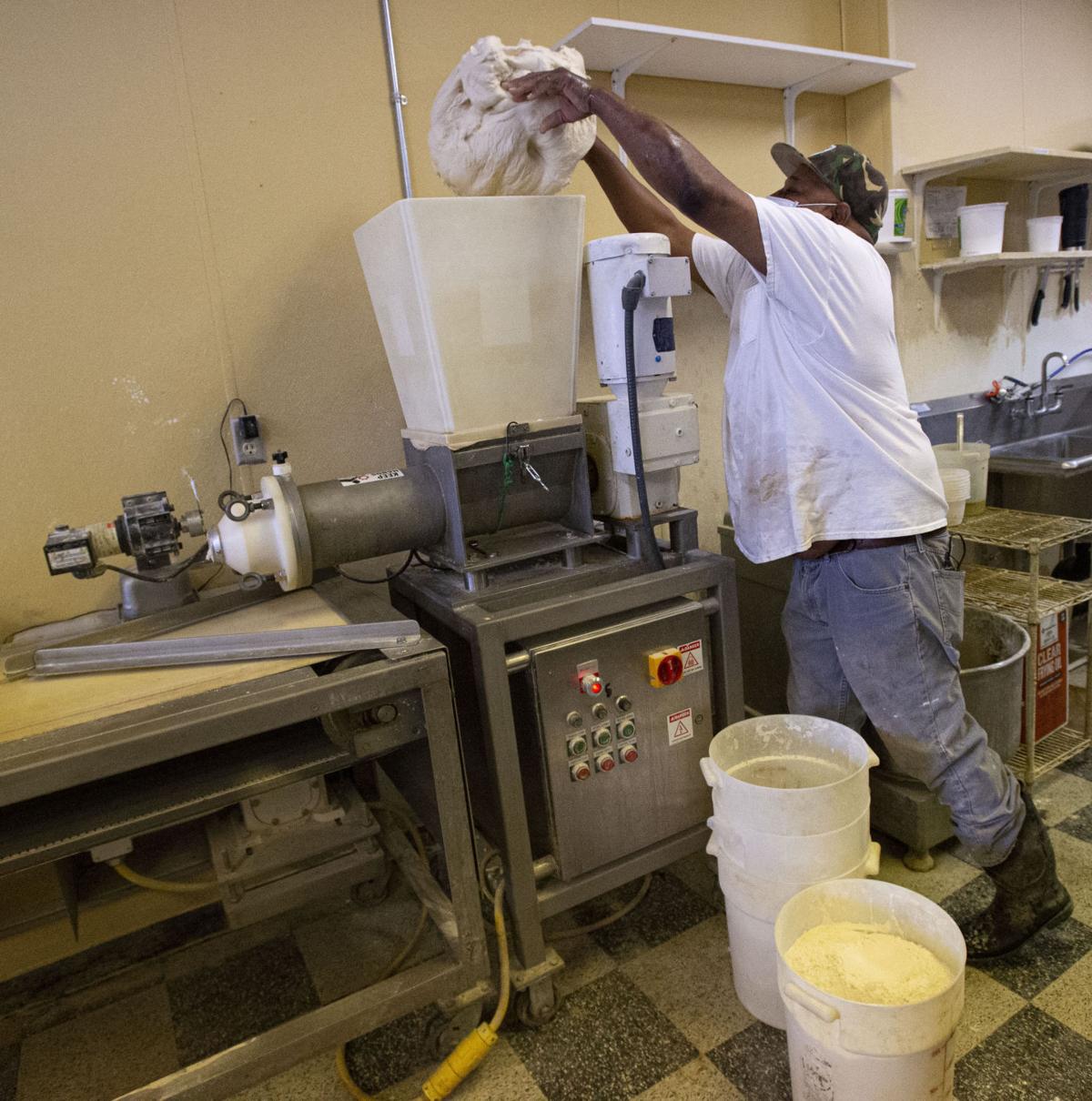 Mark Anthony Bryant places tied pretzels on a tray as another one rolls out of the pretzel machine at his shop, Mark Anthony’s Pretzels, in Colorado Springs.

Warm pretzels roll out of the oven at Mark Anthony’s Pretzels in Colorado Springs Thursday, April 30, 2020.

Mark Anthony ties a pretzel Thursday, April 30, 2020, at his shop in Colorado Springs. Mark Anthony’s Pretzels sold his pretzels solely to restaurants including Phantom Canyon and Bristol Brewery before the coronavirus shut down inside dining. He now sell his pretzel online for takeout or delivery.

As Mark Anthony Bryant likes to tell, pretzels were invented because of prayer.

A while back, Bryant heard the legend that nearly two centuries ago a monk made the world’s first pretzels to reward children who learned their prayers. The strips of dough were folded to resemble the crossed arms of a praying child.

Bryant is a praying man. And he’s a man who loves to feed people. Twenty-five years ago, he picked one passion over another and left the restaurant industry to pursue Christian ministry.

He became a skateboard pastor, using skate parks as his church. After the 2008 economic recession, he couldn’t raise the money to keep it spinning. So he prayed.

Baking bread from scratch proves popular and comforting during quarantine

Cooking has been a gift of his since growing up in Lancaster, Penn. Bryant got his first job at 14 at a hamburger shop. A work permit allowed him to split time between high school and the restaurant. His family needed the extra money.

“I get the most joy out of people eating my food. That’s always been my love,” he said. “I went back to it.”

In 2011, he started Mark Anthony’s Pretzels with $2,000 — all he could invest because he was unemployed.

“I started it because I couldn’t find any work at all,” Bryant said.

Why pretzels? And why just pretzels?

“It means to pray,” Bryant said, reflecting on that ancient story. “That’s why I picked the pretzel originally.”

Soft pretzels are also “old-school East Coast,” he said. It’s the kind of food that reminds him of being a kid.

Bryant started selling his pretzels to coffee shops around Colorado Springs, where he moved in 1997 with his wife. He put pretzels in boxes and tried to sell them to any restaurant he could find.

Phantom Canyon was the first to say yes.

He spent the following years building his wholesale business, adding clients such as Bristol Brewing and branching out into Denver’s Wynkoop Brewing and Union Station.

When diners took bites out of Bryant’s pretzels, they had no idea who made them. And that didn’t really bother the baker.

He had plenty of business. Until the coronavirus crisis.

“Everything stopped in 30 minutes, literally,” Bryant said “As soon as Gov. Polis announced the shutdown, there was nothing.”

“I had to do something,” Bryant said. “I had no choice. I had to make enough money to pay rent for my kitchen, or I’d lose my business.”

He came up with the idea of delivering pretzels to people’s homes. He’d charge $7 for a dozen. He’d also offer sides of beer cheese, made with Bristol beer.

In early April, Bryant posted a flyer on Facebook. He got 10 orders that first day.

Soon, he filled 950 orders in one week. At a dozen pretzels per order, that means over 11,000 carefully twisted pieces. He has since hired seven delivery drivers to keep up with 130 to 160 orders a day.

“We had never tried this model before, and it just started exploding,” he said. “This really turned my whole world upside down in a good way.”

It wouldn’t have happened unless Byrant’s pretzels, which he calls “the ultimate comfort food,” were good. Really good. He uses a family recipe and doesn’t even have a freezer in his commercial kitchen, so pretzels are, at most, one day old.

It has made him think about opening a pretzel shop of his own. He’s not sure when that would or could happen as the coronavirus orders closing restaurants play out.

“We’re trying to make plans without making plans,” he said.

Mostly, the popularity of his pretzels has made Bryant thankful, he said. He’s thankful he’s still busy, from 5 a.m. to 3 p.m. each day, cooking and folding pretzels fast. He makes 2,000 per day. He’s thankful, for the first time, customers are coming to him.

Along with delivery, Bryant is offering curbside pickup for pretzels every afternoon. Customers sometimes have trouble finding the unmarked building.

“I don’t even have a sign on my building,” Bryant said. “I’ve never needed one.”

A friend pointed out, “It took you nine years to become an overnight hit,” Bryant said.

And for that, he’s thankful. “Nothing has made me happier in my life than making pretzels for people,” he said.

THANK YOU! We are so grateful to each and every person who placed an order with us last week. We sold more than 950...