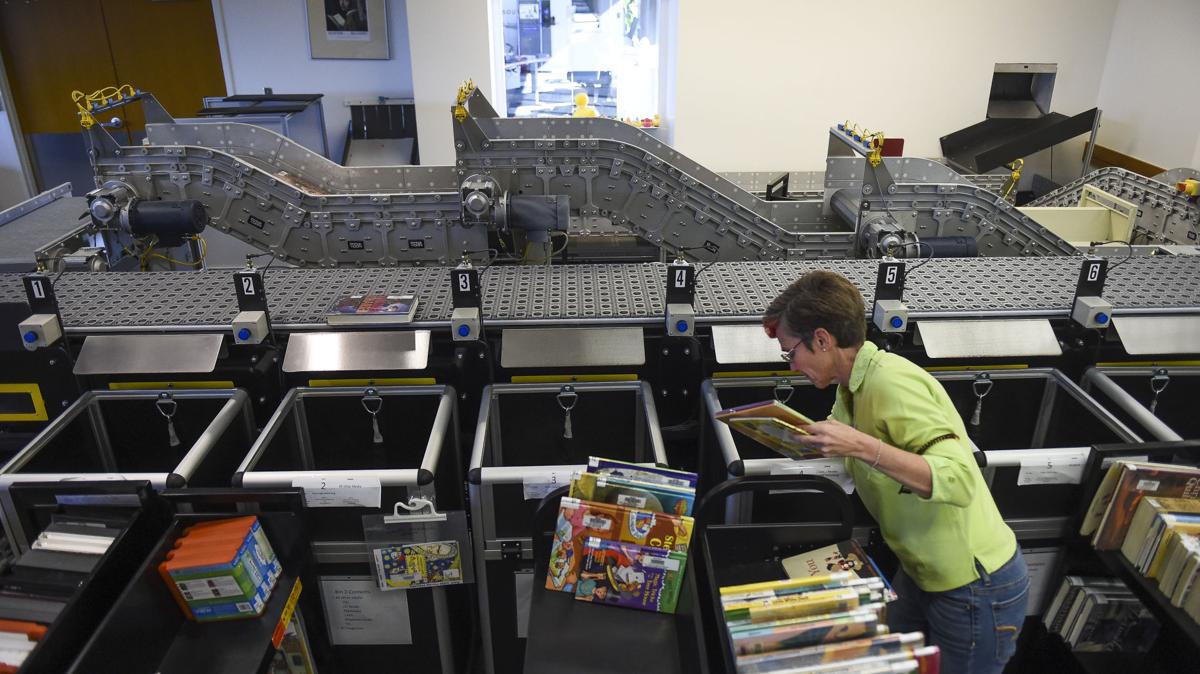 Pikes Peak Library 21C employee Karen Jenista prepares to shelve books after they have been organized by the automated book sorter Friday, October 24, 2014. The high-tech-meets-traditional library opened this past June. Michael Ciaglo, The Gazette 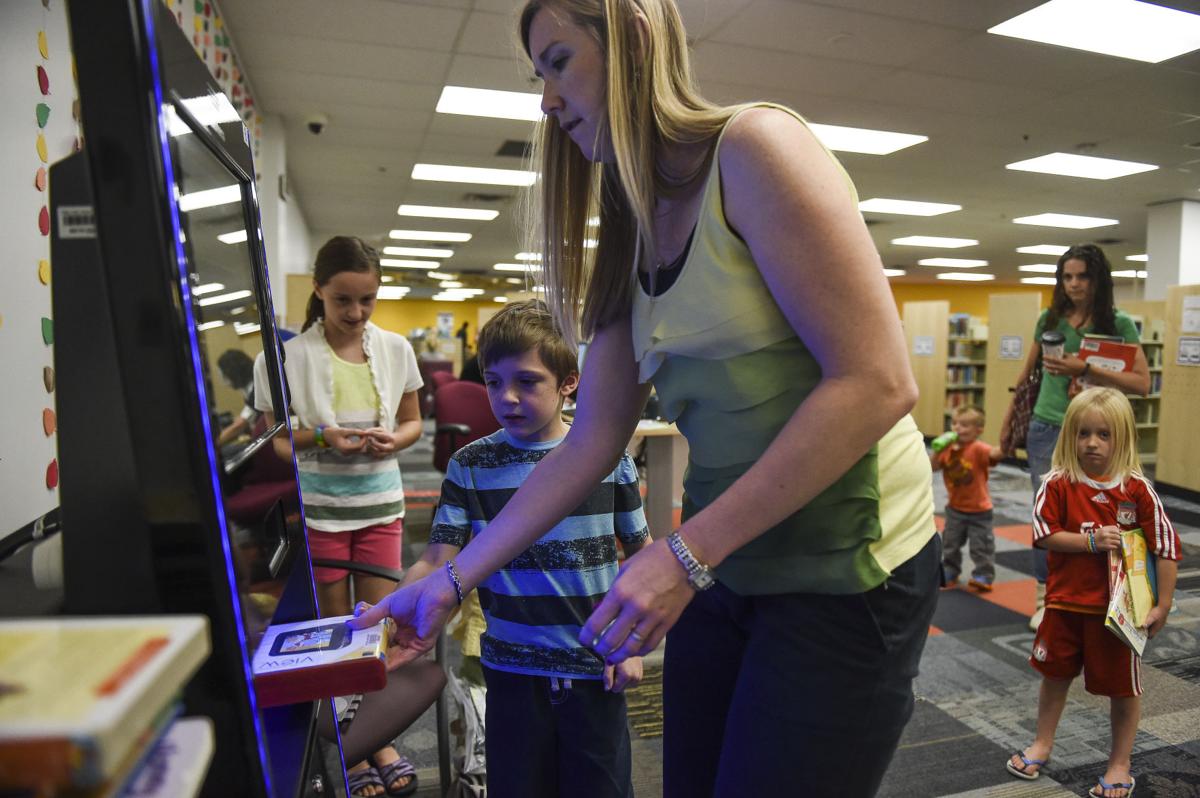 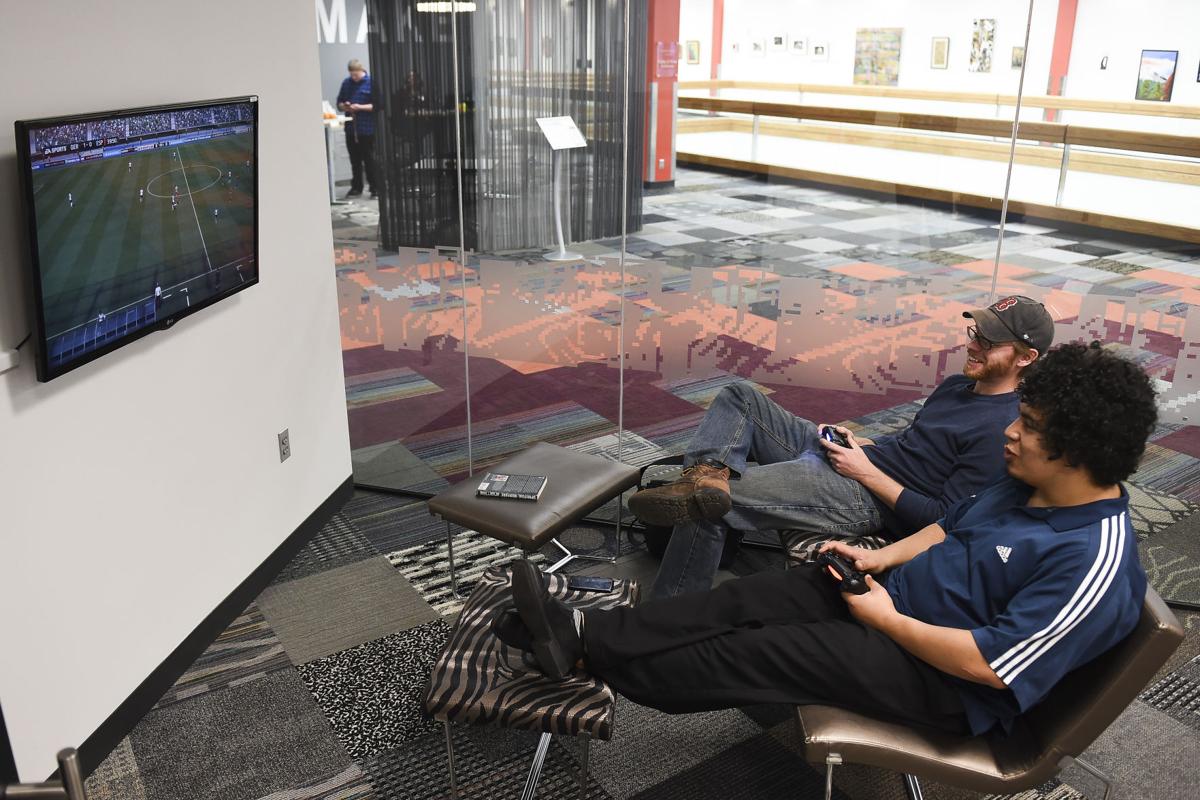 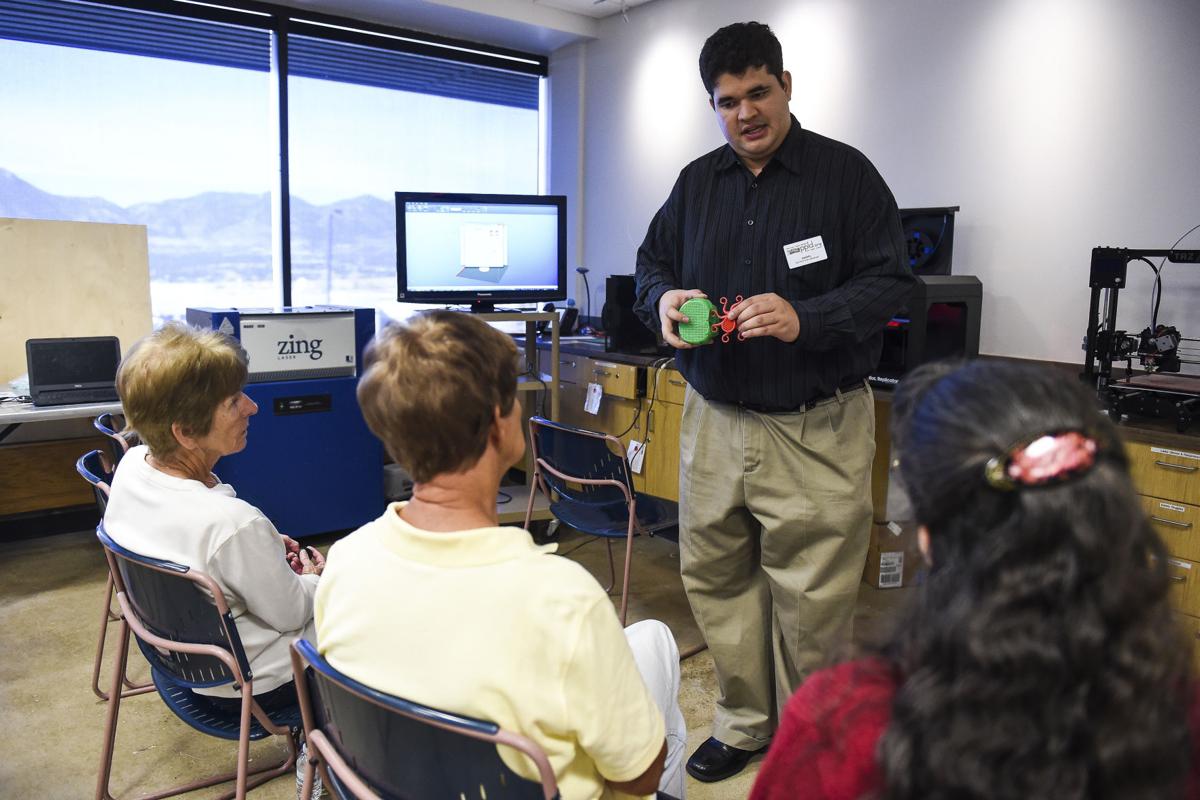 Pikes Peak Library 21C employee Karen Jenista prepares to shelve books after they have been organized by the automated book sorter Friday, October 24, 2014. The high-tech-meets-traditional library opened this past June. Michael Ciaglo, The Gazette

Remember the days when your neighborhood librarian believed silence was golden, and their domain was filled with shushes, books and walls full of card catalogs?

If you haven't been in a library since you were a kid or have been hunched over your computer at home because you imagine libraries to be stuffy boring places, then you are in for a surprise.

You particularly will not recognize Pikes Peak Library District's Library 21C, which has more technology and machinery than you can shake an old Encyclopedia Britannica at.

And as for librarians? Meet Carolyn Coulter aka, the Sword Maiden. For fun she role plays in online video games or reads award-winning fantasy books on her e-reader. At work, she heads up technology and acquisitions for PPLD's 13 branches.

Like most librarians, she was and is a voracious reader. She grew up in Kansas City, Mo., going to libraries with her father, who was a computer engineer. She has a master's degree in library science and thought she wanted to be an archivist working with old and rare materials. But times were changing and she went to work for a company that configured databases for libraries converting from card catalogs. She went on to be chief technical officer of the Boston Public Library, which has 24 branches. She came here nine years ago.

This year through September, PPLD print circulation was been down about 7 percent, while downloading of e-books increased by 50 percent.

But before all you traditionalists start hording books, know that Coulter is sure books will never disappear. She loves those heavy history tomes that will never be digitalized.

But more important than her own taste in books, she says, is that she and the PPLD library staff believe in creating branches that have experiences and materials that make them relevant for everyone.

It's not so easy to walk that line between, say, libraries like the one in San Antonio, which has gone totally bookless, and those where you can almost get lost in the book stacks.

"It's a challenge here and all over the country," Coulter said. "Sometimes we wish we had a silver bullet."

For example the other day, there were varying reactions to the 112,000 square ft., high tech Library 21c, at 1175 Chapel Hills Drive, which opened in June and has been getting rave reviews nationally.

"I'm sort of disappointed," said Julia Davis, 66. "This is such a huge place, I thought it would be more books. There are not enough. I like to prowl. This doesn't feel comfortable."

"It's a neat place," he said. "I've been here five times, there is so much to see and do. I like the space. Some libraries are just to crammed. And I like the art exhibits on the walls."

In the kids area, Maria Meyer, was watching her sons Owen, 6, and Nathan, 4, play video games. The boys hardly took their eyes off the screen. "I'm making glass and killing creepers," Owen said. Nathan said he was "trying to get a bunny for food."

Meyer said that they come to Library 21c about once a month as a special treat. Usually they walk to their smaller neighborhood Rockrimmon Branch at 832 Village Center Drive a couple times a week. The waits for a computer can be longer there, and they don't have the popular Minecraft game. But they check out lots of books and movies.

Professionals say PPLD has done a good job figuring out the digital-traditional formula. The district has received many accolades in the years since 1981 when it became one of the first in the nation to go digital, offering access to the library's computer system.

Courtney Young, president of the American Library Association, said smart libraries are building for the future, and Library 21c is an example of that.

The staff has been working on Library 21C for five years. It opened in June, converting a call center into a spacious facility. As the library website says, it's the first of its kind in the country, and "It will challenge everything you know about the public library. It's a paradigm shift."

Young is impressed with how Library 21c has tapped into the emerging interest in the so-called maker movement - peer-to-peer skills, collaborative learning and hands-on creativity for everyone from entrepreneurs to school kids.

In the library's Makerspace patrons can create items with help of laser cutters, 3-D printers, sewing machines, fabrication and vinyl conversion equipment, various printers and software. Some entrepreneurs are using the area to make prototypes of products.

There are other specialized spaces: Public Media Center, with video and audio production studio; Cyberclinic, where people can get help with tech questions or use laptops and iPads in-house; the Gaming Center, where you can play or create computer games; and the Business and Entrepreneurial Center with meeting space and catering, assistance with business databases, and a copy and fax center.

One of Coulter's favorite areas is the Venue@21C, which has a performance arts and lecture stage with seating for 400. There's even a WiFi-like hearing loop system running under the rug that enhances sound for patrons that have the newer hearing aids.

The facility includes books, a café, and yes, books. There are also many events and classes that draw patrons day and night. One recent schedule included yoga, Excell, music studio, entertaining with flowers, ping pong, and "Lit Unlocked," which promised to "provided strategies to unlock difficult texts and explore the relationship between culture and literature."

Not all libraries in the district are so high tech as Library 21C, but they are also geared to their patrons needs, Coulter said.

Library 21C attracts many young families in the area. Cheyenne Mountain Library on 8th Street has a diverse clientele that ranges from the impoverished to the well to do, and from tots to the elderly. The Ruth Holley branch at 685 N. Murray Blvd., and Sand Creek branch at 1821 S. Academy Blvd., have a diverse clientele, and emphasize having available computers for those who might not have them at home.

The larger East Library at 550 N. Union Blvd., and downtown Penrose branches attract patrons from all over. Penrose emphasizes regional history and genealogy in the historic Carnegie section.

There's a library book vending machine at Cinema Point off Powers, where people are busy with shopping and theater going, can grab a quick read as they go by. The bookmobile brings the library to senior communities in the city and rural areas on the eastern Plains.

Catering to so many needs and interests is working. PPLD circulated more than 1 million items last year and was ranked 19th in circulation nationally among those that serve communities with population between 500,000 and a million.

"One of the main reasons that we have so many people reading is most likely due to so many of our patrons having advanced education," Coulter said.

She points to the 2013 Quality of Life Indicators for the Pikes Peak Region published by the United Way which says residents have attained high levels of education and earned more degrees compared to similar cities. The percentage of residents with graduate degrees is above the state average of Colorado and the U.S.

"They are becoming the vibrant centers of the community where everyone is welcome and there is something available for everyone.