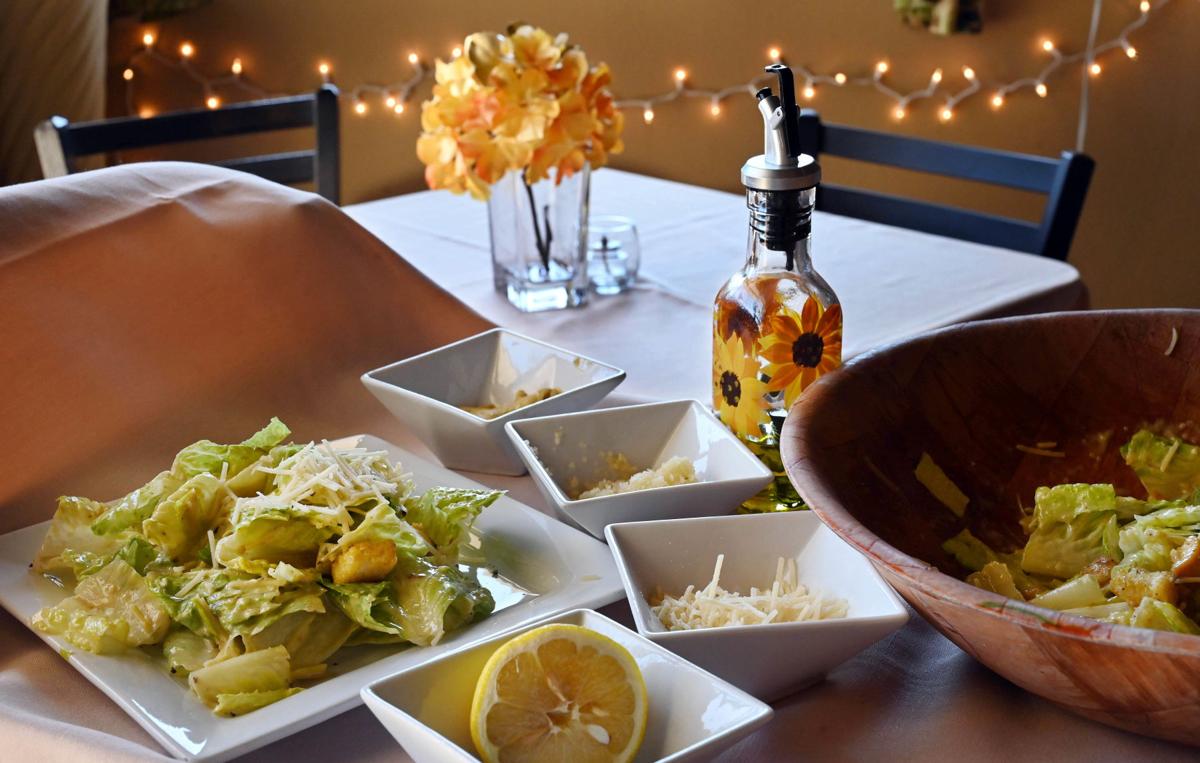 Joseph Freyre, owner of Joseph’s Fine Dining, wows diners with his table-side preparation of dishes that include his famous Caesar salad. 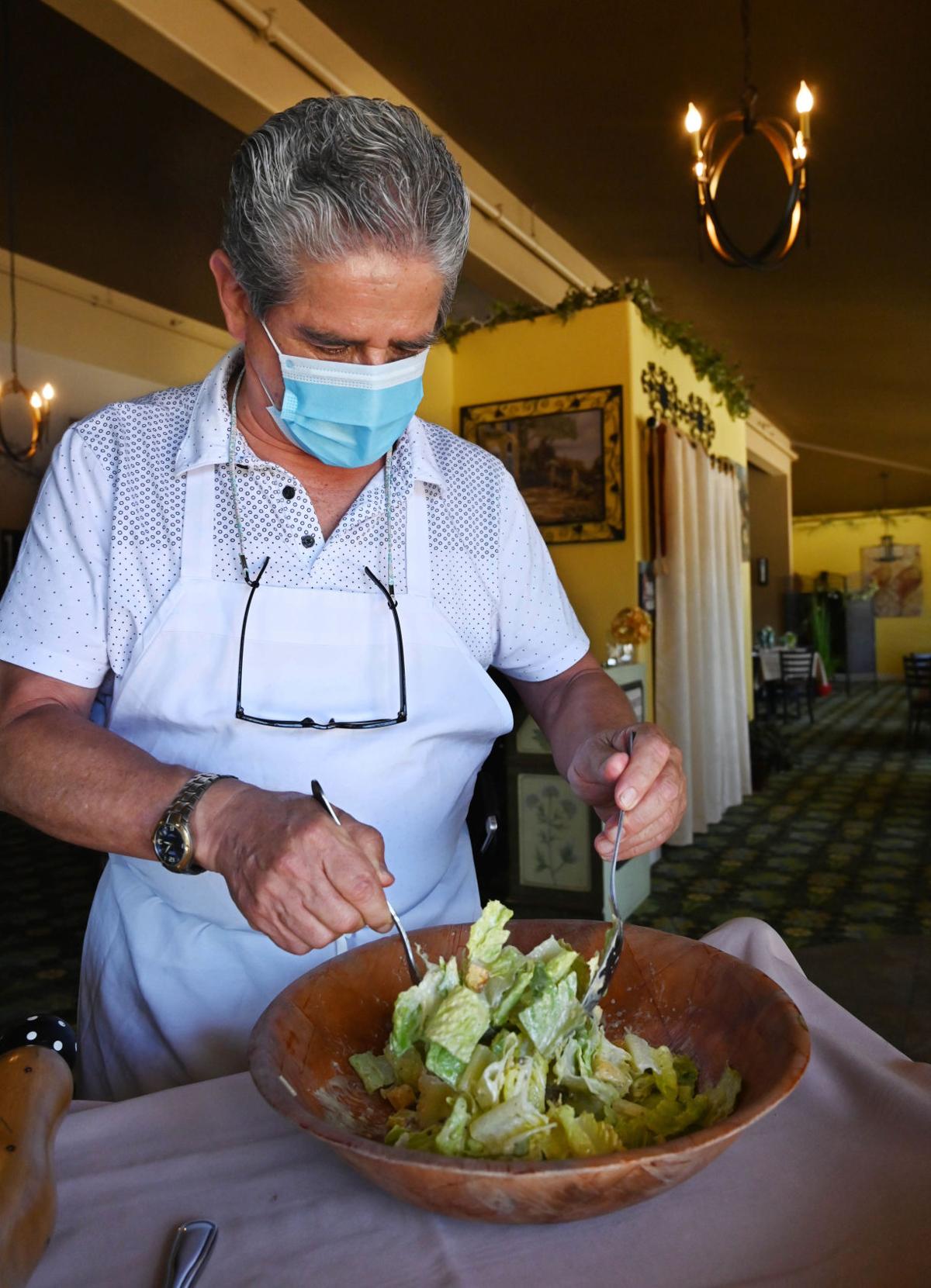 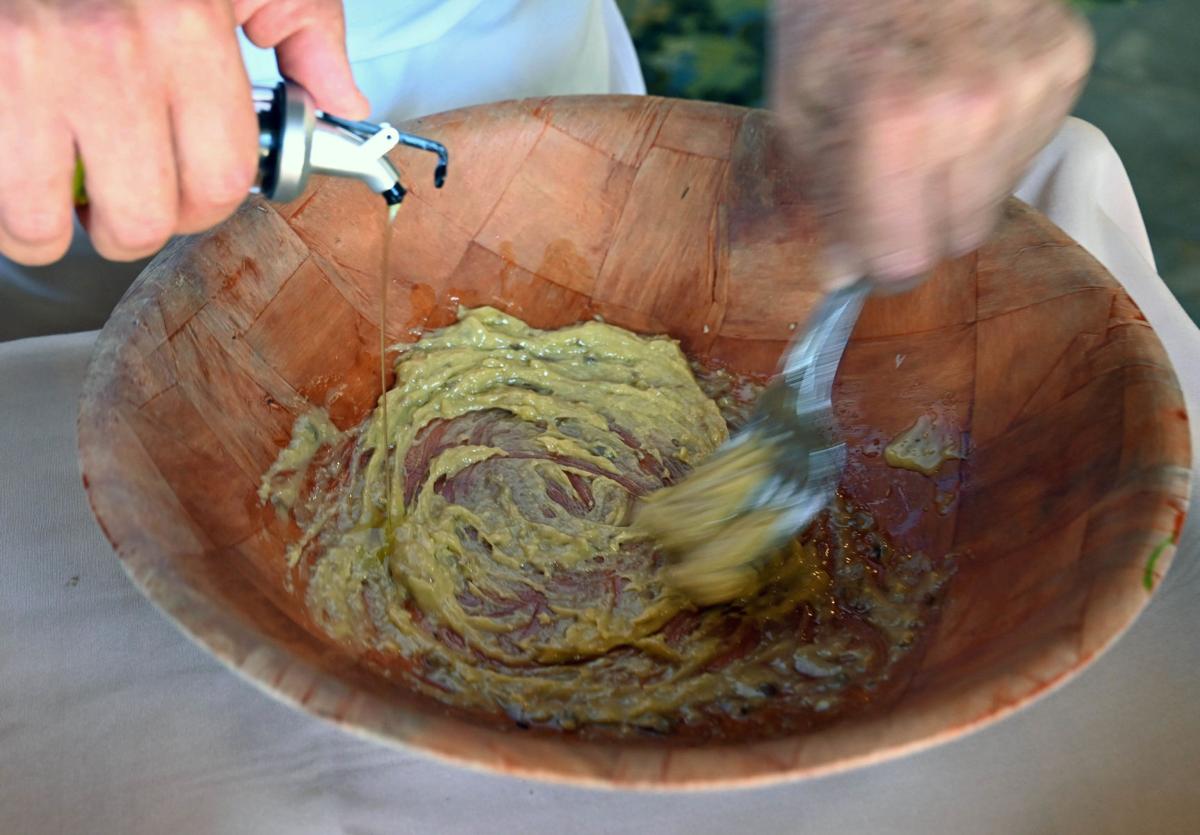 Joseph Freyre, owner of Joseph’s Fine Dining, wows diners with his table-side preparation of dishes that include his famous Caesar salad.

Getting dressed takes on a whole new meaning when it comes to salads.

A large wardrobe of ingredient combinations in search of the perfect fit are available for complementing any salad, said David Cook, who co-owns Gather Food Studio with Cortney Smith. You can go one of three ways: vinaigrettes (oil and acid), emulsions (“full” and “temporary”), and cream (dairy or dairy-like ingredients).

Joseph Freyre, owner of Joseph’s Fine Dining, is another dressing specialist and wows diners with his table-side preparation of dishes that include his famous Caesar salad. He, Cook and Smith offered the following tips for salad dressing preparation.

A basic vinaigrette is the simplest and fastest dressing to prepare — you only need oil and vinegar. But Smith is quick to point out a different way of looking at it.

“I encourage our students to think ‘fat’ and ‘acid’ rather than ‘oil’ and ‘vinegar,’” she said. “That opens up a whole world of options that they may never have thought of before. I like to use the brines in the condiments in my refrigerator like: caper brine, preserved lemon juice or even the juice in a jar of red peppers.”

She continued, “If you remember this vinaigrette ratio — one part acid and three parts fat — you’ll have never- ending dressing options from your fridge and pantry at home.”

An emulsion is a suspension of one liquid into another that wouldn’t ordinarily turn into a homogenous mixture. Think oil and vinegar, which are actually the base for many emulsions.

“If you add ingredients like honey, mustard or even jam to the acid and oil of a vinaigrette, they become the emulsion ingredients,” said Smith. “If you’re in a hurry, throw it all in a Mason jar and give it a good shake.”

“From there,” she continued, “you can add fresh garden herbs, garlic or spices to amp up the flavor. And, as always, add salt and pepper. This is also a great place to sneak in those flavored oils and salts that everyone gives their favorite foodie for gifts that are just hanging out in the pantry.”

The result of all this would be a temporary emulsion. It’s called that because any leftovers stored in the fridge will separate and need a shake the next time you want to use it to dress a salad.

Full emulsions — vinaigrettes that will stay suspended — take patience and a little longer to prepare. Freyre’s Caesar dressing is an example of a fully emulsified vinaigrette.

Freyre mashes garlic (a lot of it) with two anchovies in the bottom of a large wooden bowl. Then he adds a coddled egg yolk, a dollop of Dijon mustard and juice of half a lemon, and whisks the mixture together with a fork. Next, he slowly adds olive oil to the to the bowl, a few drops at a time at first, until the mixture starts to become creamy.

Then he starts to whisk vigorously, adding oil in a thin, steady stream until he has the amount of dressing he wants to make.

“When making an emulsified vinaigrette by hand,” said Cook, “it is imperative that the oil is added in the slowest and steadiest of streams while stirring vigorously. Otherwise the oil will not suspend correctly and will ‘break’ out of the vinaigrette.”

By “break,” he means the oil will separate from the vinegar, garlic and anchovy mixture.

Freyre tosses chopped Romaine lettuce and toasted croutons into the dressing. To serve, he swirls a little oil on two salad plates, grinds a few grounds of black pepper over the oil and piles on the salad. He finishes with a sprinkle of grated Parmesan cheese.

A surefire way for the home cook to make an emulsion is to use a blender.

“Make extra sure you add the oil in a slow and steady stream,” Cook said. “But also make sure you don’t take too much time, as the friction from the motor will generate heat, and heat can break an emulsion too.”

“If you’re making a creamy dressing, like a blue cheese dressing, fold the cheese chunks in after making the cream base,” he said. “Cheese and larger ingredients can fall apart easily and get blended into the base. It’s flavorful, but less so than biting into a nice chuck of cheese.”

Cook had one final tip.

“When making salads,” he said, “don’t dress the salad too early. The heaviness of the dressing/vinaigrette could be too much weight for the salad greens, and they could start to collapse and lose their crunch.”

So why bother making your own salad dressing?

“It’s so easy, there’s no reason not to,” Smith said. “I prefer homemade dressing to store-bought because you can control the ingredients. The main ingredients in shelf-stable dressings are sodium and sugar. Making your own allows you to limit what goes into them.”

Now that you have some tasty, stylish ways to dress a salad, go practice wowing your family!

Place all ingredients in blender and puree until smooth and there’s no bits of anything left visible.

Either using a food processor or whisking by hand, combine the garlic, anchovy paste, Dijon, mayonnaise, Worcestershire, and lemon juice. Mix well. Slowy, while the processor is on, or whisking the whole time, drizzle in the extra virgin olive oil. When a creamy dressing is made, add in the parmesan cheese and the Cajun seasoning. Blend until smooth, or hand mix to as smooth a consistency as possible. Set aside.

Mix all ingredients together and chill before serving.