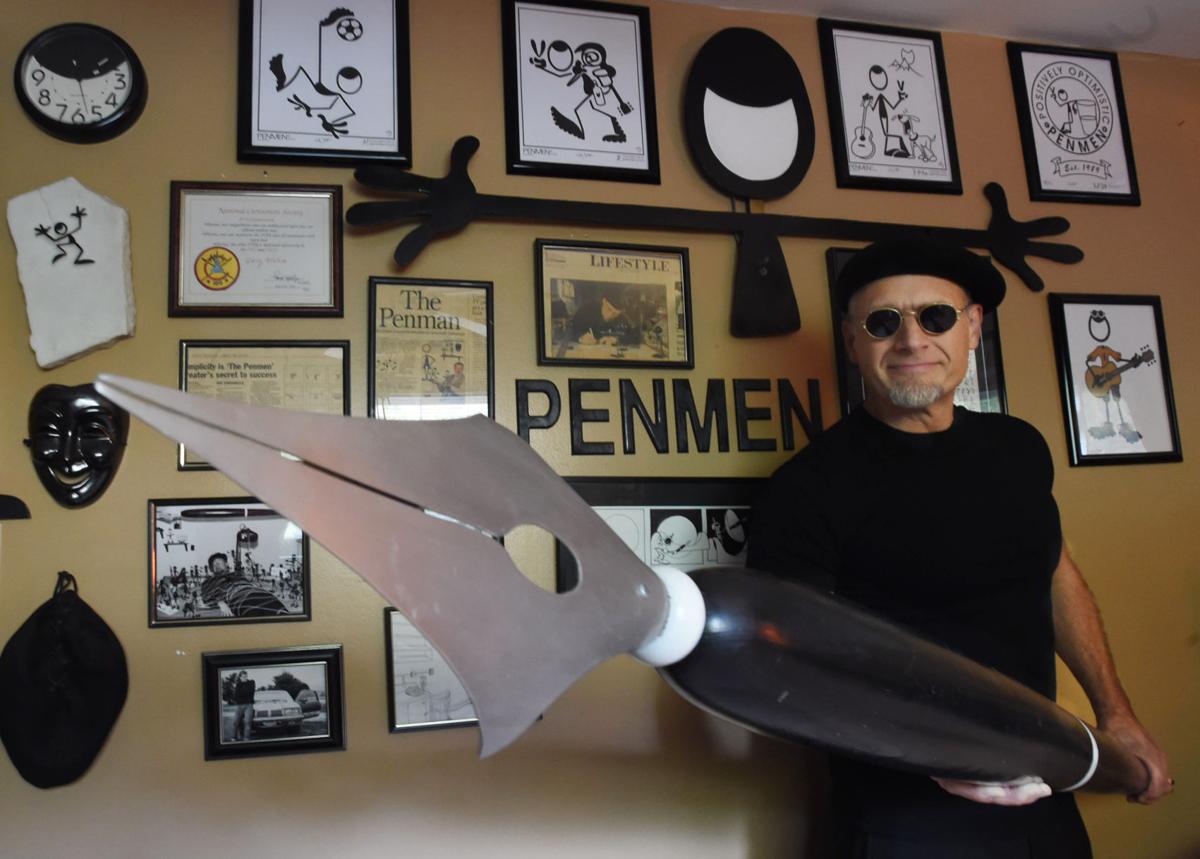 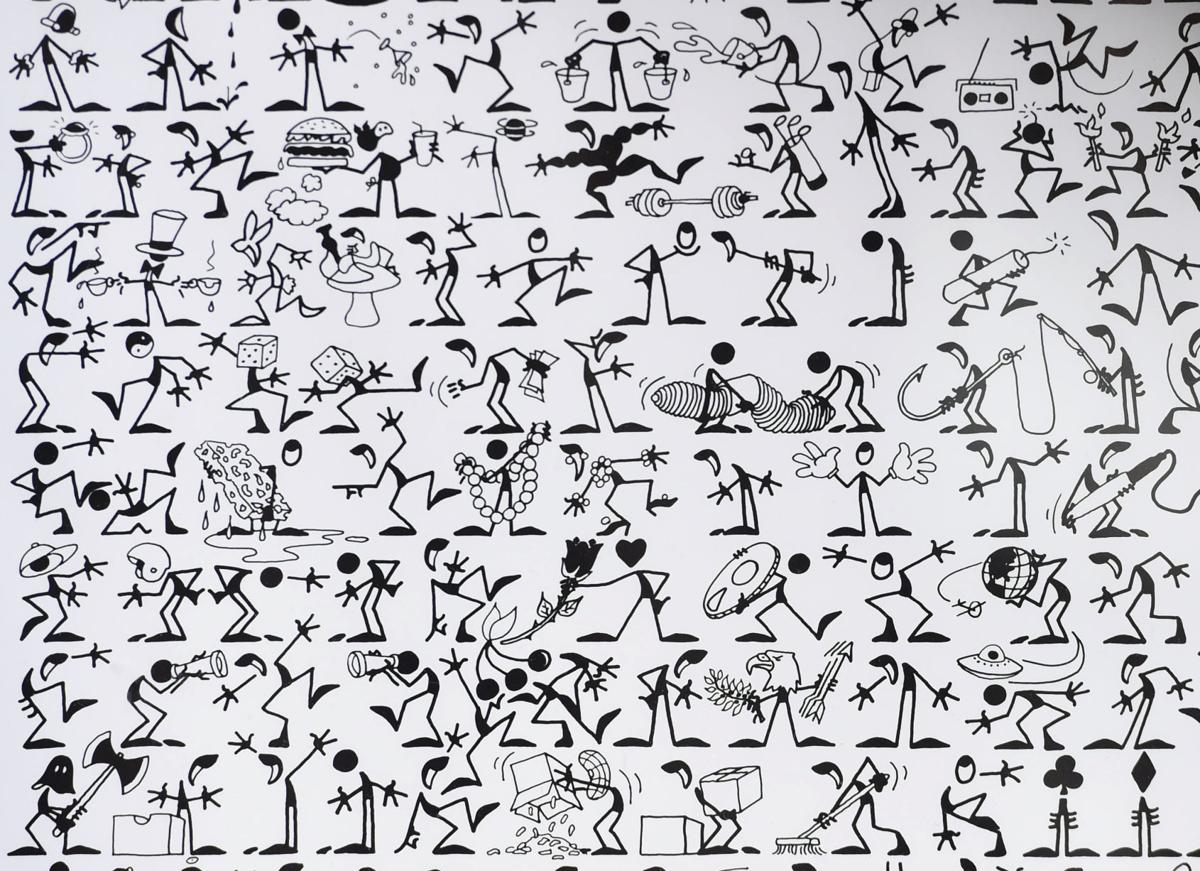 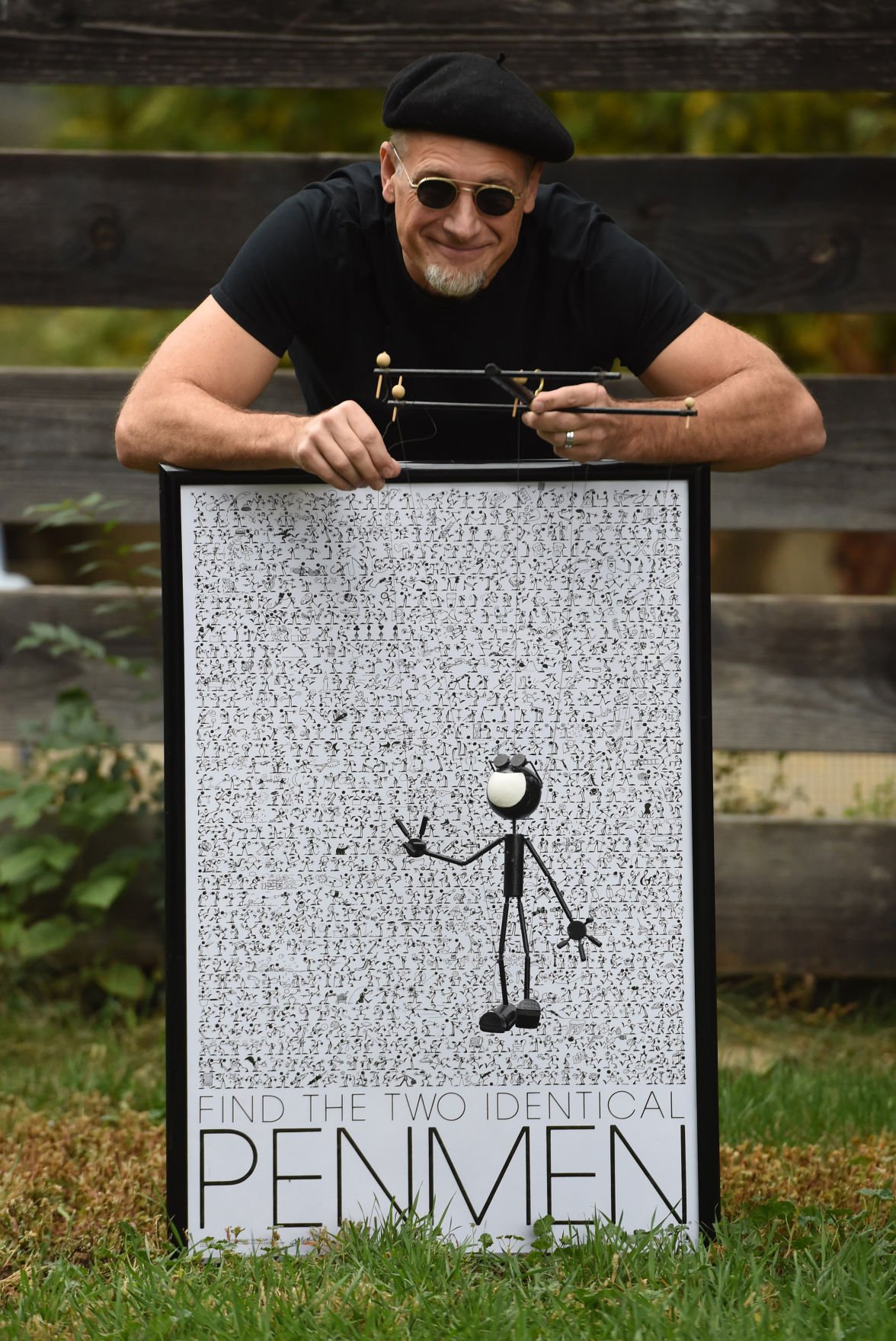 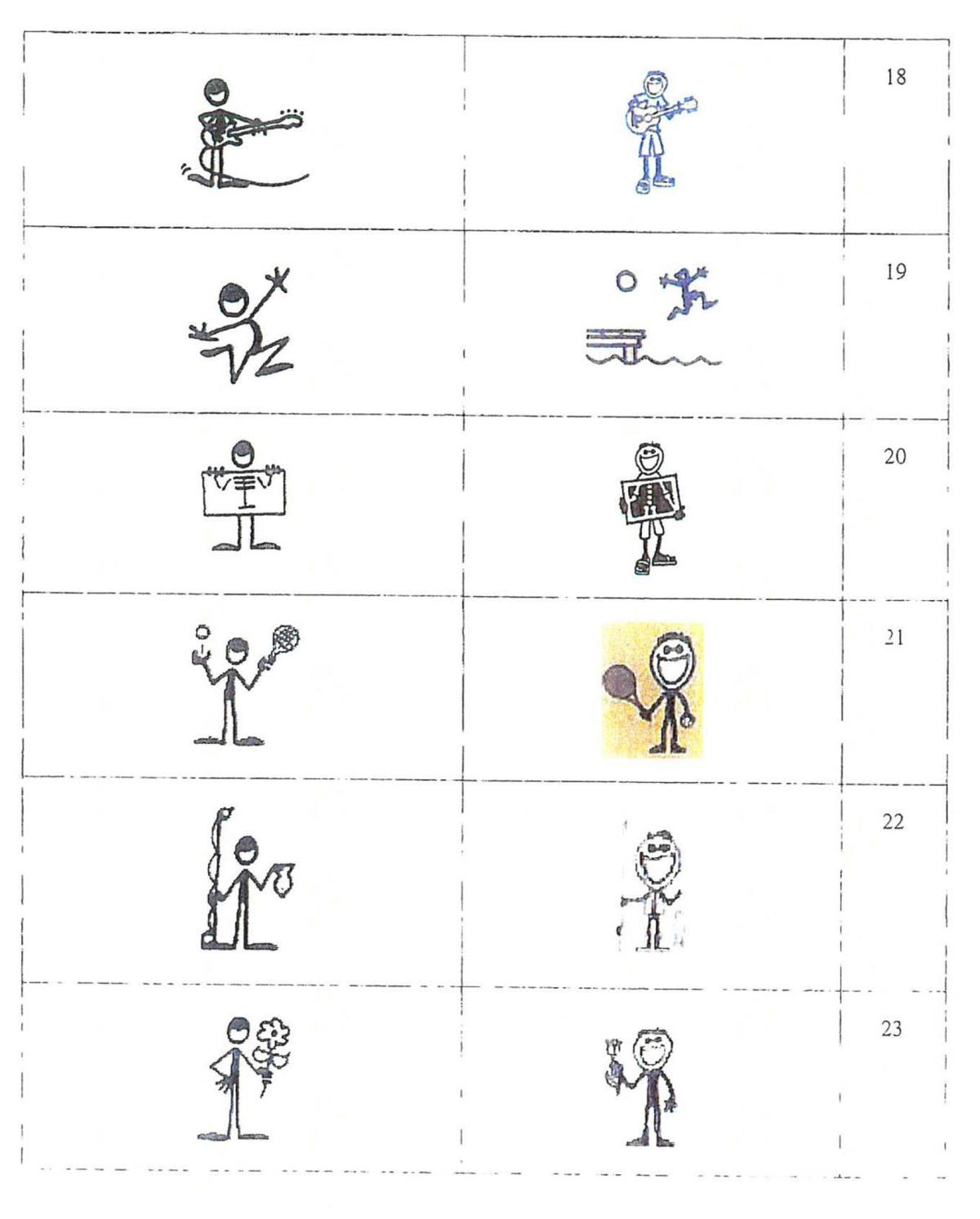 When comic strip artist Gary Blehm gets to work in his Colorado Springs bedroom/art studio, there's no time to mess around.

In his line of funny business, the stakes couldn't be higher.

"I'm trying to retake my life," is how Blehm puts it, without a trace of irony.

This might sound heavy coming from a former scribe for the newspaper funny pages, especially one pushing a message of unbridled optimism and a revamped comics brand called "Grin Big."

But there's little question that Blehm's back story justifies the existential gloom, even if he's determined to engineer a happy ending.

Blehm, 50, is the creator of "Penmen," an elegant, wordless comic strip that saw his star rise rapidly in the 1990s, only to come crashing back to earth. He blames a pair of rival artists who hit it big with a similar character, a similar aesthetic and the same irrepressible, happy-go-lucky message.

Before Blehm knew it, the characters he designed as a child and refined as a student at Pikes Peak Community College were considered knockoffs.

The feeling burns to this day, touching every aspect of his comeback bid.

"The problem is, I'm truly an optimist, and I have no choice but to just keep going forward," he says.

First published by The Gazette in 1995, "Penmen" featured the antics and adventures of dressed-up stick figures brought to life with whimsical design touches and a Chaplin-esque approach to storytelling. Wordless comics were popular in the 1920s and '30s, but Blehm's work was unique for its time, and readers took notice.

On the strength of its success in Colorado Springs, the strip was picked up by Creators Syndicate, distributor of "Archie" and "B.C.," which led to "Penmen" being featured in major newspapers such as the Philadelphia Inquirer and Detroit Free-Press, ultimately delivering Blehm's vision to an audience of up to 6 million a day.

A poster featuring hundreds of Blehm's trademark characters - some camping, some fishing, some playing Frisbee or strumming a guitar - was stocked in stores such as Wal-Mart and Toys R Us, eventually selling more than 100,000 copies.

A book of "Penmen" strips was published by Harcourt Brace.

At comic strip conventions, he was cheered as a rising talent. And when he nervously approached Charles Schulz, the legendary creator of "Peanuts," he got the surprise of a lifetime.

Blehm thought a mention of the men's connection to Colorado Springs might be his only hope for a conversation. But Schulz, who lived briefly in the Springs while conceiving "Peanuts," recognized Blehm's name and his comic strip.

In Blehm's world, gifts are meant to be shared and, through his success, he wanted nothing more than to spread the gospel of positive thinking.

Wearing a black beret and black, rounded sunglasses - evoking a mime, in a nod to his wordless strip - Blehm visited area elementary schools, where he encouraged children to follow their dreams.

They might not find unimaginable wealth, but they could find satisfaction and happiness, he told them, and the joy of spreading that message supplemented his modest income.

"I was making what you could consider a living," he says. "I wasn't a starving artist, but I wasn't rich and famous either."

Yet it was all-consuming work. Blehm says he remembers his sons running around him while he stacked posters waiting to be shipped. His life's work became entwined in their childhoods, and vice versa.

"I raised my kids in the basement while drawing and selling posters out of these poster cabinets," he says.

As the 1990s wore on, demand for "Penmen" declined. The strip was dropped by several newspapers, including The Gazette, and Creators Syndicate ended its deal with Blehm. Poster and book sales likewise slumped, making it seem like "Penmen," an idea Blehm had been chasing since childhood, had run its course.

What Blehm didn't realize, he says, is that his basic approach to cartooning was flourishing - except instead of Blehm getting the credit, it was another pair of artists halfway across the country.

Jake embraced a life of adventure with gusto, and his unwavering positivity led to the Jacobs' brand name, "Life is Good."

Blehm recalls going three nights without sleep after discovering "Life is Good." Similarities to his work, he says, were "horrifying," and it churned his emotions.

"The only way to really get what happened is to see the comparison," he says.

But where "Penmen" faded into obscurity, the character Blehm viewed as a knockoff went supernova, spawning a $100 million global merchandising brand, complete with fawning profiles of its creators in national business magazines.

Blehm, who pays the bills as an anonymous freelance graphic designer, became convinced that the Jacobs' success came at his expense.

"My sales and everything I was doing began tapering off when they showed up," he says.

Intent on protecting his life's work, Blehm filed a federal lawsuit in 2009, starting a battle he's still waging today - even if the courts already have spoken.

A Washington native, Blehm came to Colorado as a third-grader when his father pulled up stakes and moved the family to Rulison, a tiny ranching community above Rifle and Parachute in the heart of the Rocky Mountains.

He recalls an idyllic childhood filled with camping, hiking and outdoor adventures. And it was in a one-room schoolhouse in Aspen where Blehm began to draft the characters who would come to populate "Penmen."

"I pulled them out of my book and put them in my pocket," he says of his sketches, recalling an urge to ward off doodlers who might "steal my idea."

Soon, sketching the characters became an "obsession," and he told his parents he would make a living by drawing stick men.

After graduating high school, Blehm worked at The Broadmoor and attended fine arts classes at Pikes Peak Community College, where he worked on developing his characters.

He began to refine his use of negative space and to apply subtle bends in his lines to suggest weight and movement. He experimented with the constraints of his format, allowing characters to gaze back at the viewer for comic effect, or to run face-first into the borders that delineated the panes of his comic strip.

By the time he persuaded The Gazette to carry "Penmen," his aesthetic had gelled and, in Blehm's view, his artistry went well beyond stick figures.

Convincing a judge wouldn't be so easy, however.

Blehm's lawsuit, filed in 2009, sought to make the case that coincidence alone couldn't account for similarities between the characters.

Side-by-side comparisons showed that Jake shared the same interests, even using similar body language as he strummed a guitar, caught a Frisbee and warmed himself by a fire, all staples of the "Penmen" universe.

Blehm's lawyers, from Holland and Hart in Denver, suggested a time and place when Blehm's work had been copied. One of the first stores to start selling the "Penmen" poster was Harvard Coop Bookstore in Boston. During that time, the Jacobs were selling T-shirts from a van a few blocks away, Blehm's lawyers alleged. (The Jacobs maintained they never had heard of Blehm nor seen his poster.) A judge, however, tossed the suit, ruling that while the artists pursued similar ideas, their "execution" was sufficiently different to avoid copyright claims. A federal appeals court reached the same conclusion in 2013, effectively quashing Blehm's legal action.

"To read the case, they agreed with nearly every point we made," Blehm says. "But they said they couldn't let me have a monopoly on a stick figure. I don't consider it a stick figure."

Two years after exhausting his legal options, Blehm still is trying to regain his footing.

Instead of a sketch pad, he now uses a computer program that allows him to draw his characters. He posts new work on Twitter and watches carefully for a response.

He feels bedeviled by fans of "Life is Good," who call him a copycat and a "blazing rip-off."

The attacks sting, but he understands where they come from.

"What I created became a household name under somebody else's name," he says. "So how in the world do I go out now and do what's already been done?"

Blehm maintains he's intent on doing just that. He has no interest in trying something new.

"It's all I've known since I was 12," he says. "I have an agent now who's encouraged me to think of other ideas and brands, but I can't walk away from this one. It's a part of me.

"As tough as it is, trudging along with people accusing me of being a rip-off, I figure I'll just keep doing it until they stop accusing me. I'm just too doggedly determined to change."

Part of being an optimist, he says, is refusing to give in, no matter the odds.