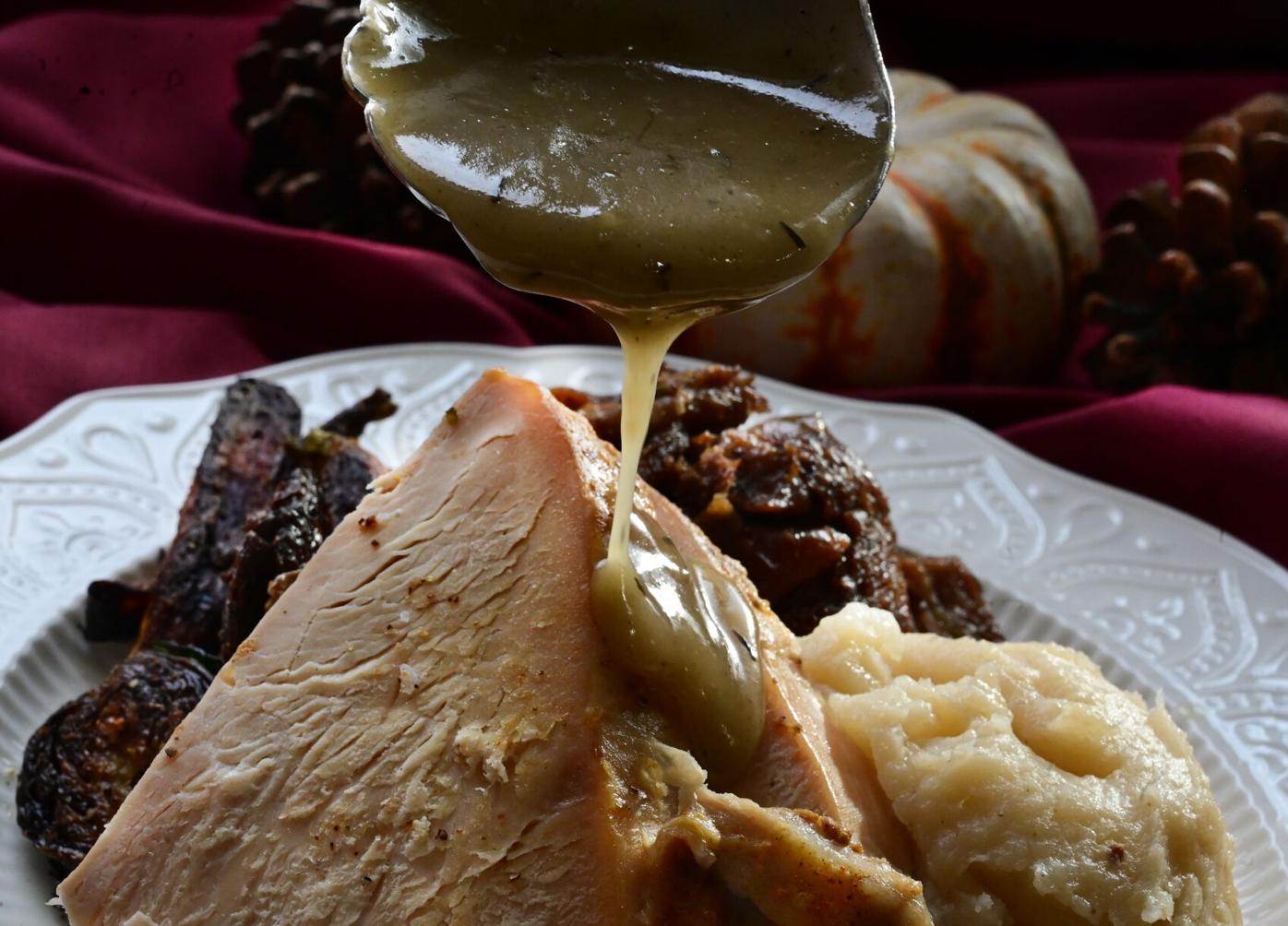 You don’t have to wait until Thanksgiving to make gravy for the holiday meal. 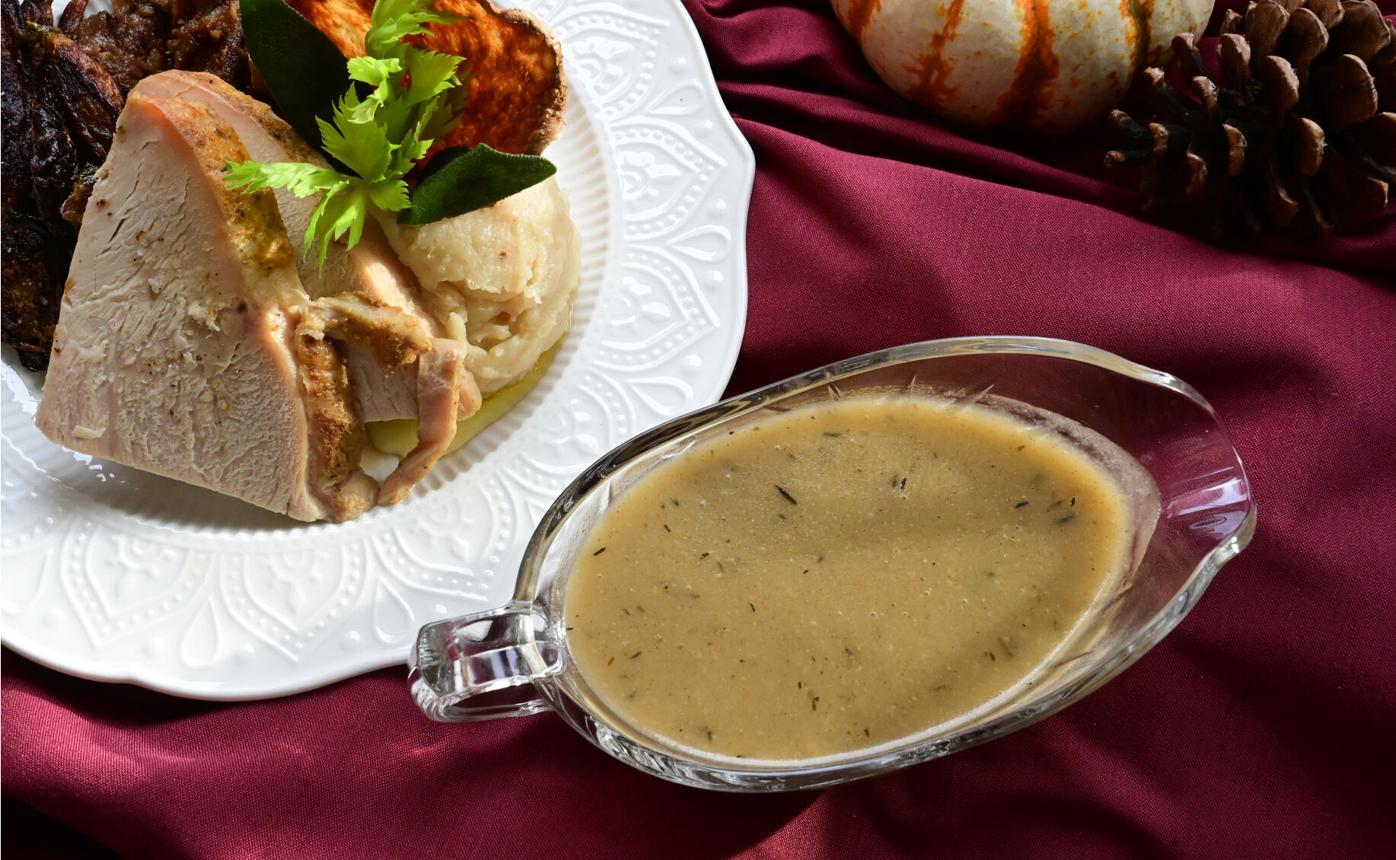 See Page 3 for a gravy recipe. 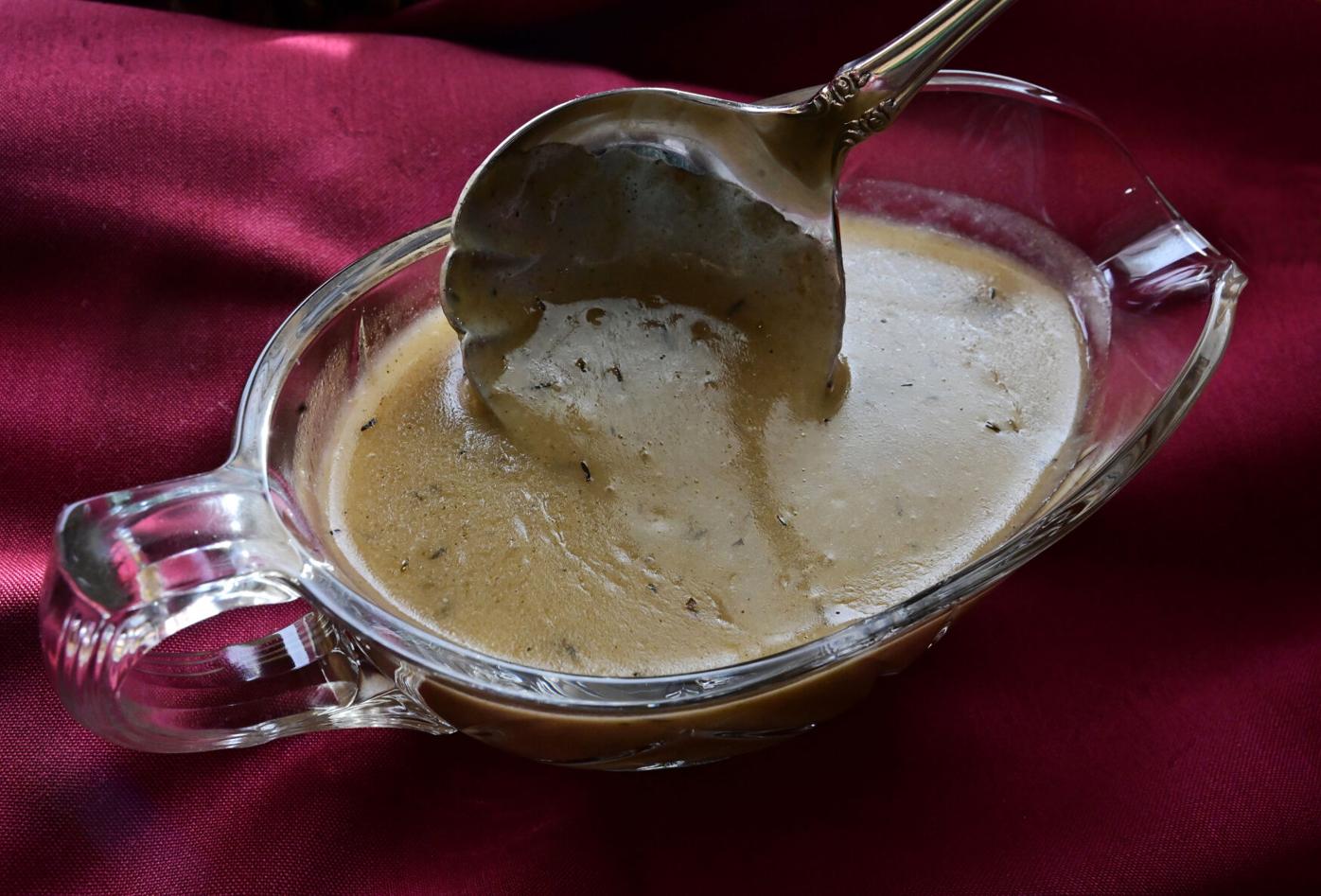 Gravy for Thanksgiving dinner can be made ahead of the big day.

You don’t have to wait until Thanksgiving to make gravy for the holiday meal.

See Page 3 for a gravy recipe.

Gravy for Thanksgiving dinner can be made ahead of the big day.

What can throw a wet blanket on a Thanksgiving feast faster than a busted oven? Lumpy gravy.

Many a novice and not-so-inexperienced cook has faced this frustrating situation. You waited until it was almost time to gather at the table before making that steaming hot, velvety-smooth pièce de résistance — and it turned into an inedible mess.

“Lumpy gravy happened all the time when my mom was making gravy,” she said. “She’d bring water or broth to a boil and add the flour. The flour would get lumpy, and then she’d try to mash out the lumps.”

If you’ve found yourself in this situation, we have some tips that will keep you from having to reach for a strainer to try and save the day. And you’ll actually be getting the job done the day before Turkey Day.

That’s right, make-ahead gravy, instead of scrambling to make it from pan drippings right before serving time.

Trujillo and Hunter Huffman — executive chef at Till Neighborhood Bistro and Bar and owner of Cazador, a meal delivery service — start by thinking like the professional chefs they are: They break down complex menus and make a timeline for getting the job done.

Stick with us here — it’s actually a direct path to a good gravy.

When Huffman hits the kitchen to make turkey meals for the 30 families on his subscription list, he starts by roasting the meat to 145 degrees a few days before the delivery date.

“Then I break the turkey down and roast the bones of the carcass for stock,” he said. “The meat is sliced and spread on sheet pans to cool, and I store it in the refrigerator. I throw the bones into the oven to roast and get browned.”

He places the browned bones into a large stockpot and covers them with water.

“While the stock comes to a simmer, I caramelize onions, celery and carrots in butter,” he said. “You can add finely chopped cooked giblets if you like. They are optional. The vegetables with some seasonings are added to the stockpot.”

The stock is simmered several hours to get all the rich marrow cooked out of the bones. Remove and discard the bones, then cool and refrigerate the stock until ready to make the gravy.

“I make the gravy a day or so before I’m ready to pack up the meal for delivery,” he said. “I make a roux of equal parts flour and butter. The flour is mixed into melted butter until the flour has cooked a few minutes to slightly brown and get rid of the starchy taste. Then slowly add the heated stock until the gravy has thickened. It can now be portioned into containers and refrigerated until we pack the meal for delivery.”

If you do not want to cook the turkey ahead, you can get satisfactory results by making the gravy ahead using store-bought chicken stock. On Thanksgiving Day when you are reheating the gravy, add some of the pan drippings from the roasted turkey. That will amp up the flavor.

Once you reach pre-made gravy perfection, it can be refrigerated or frozen and reheated when you’re ready to serve.

You can also make a gluten-free gravy.

“For that, we use equal parts cornstarch and cold water to make the roux,” Trujillo said. “Then it is slowly added to the simmering broth. It can be cooled and reheated too, but it cannot be frozen. The cornstarch will break down and the gravy gets watery when frozen. Either way, the gravy can be made and refrigerated two to three days ahead of when you need it.”

Lumpy gravy, by the way, is caused by dumping the flour all at once into boiling broth.

“Flour needs to be incorporated with oil to make a roux,” Trujillo said. “Once the flour is cooked in fat, you can slowly add hot broth to make gravy. I use equal parts oil to flour: one cup flour to one cup of oil.”

Lumpy gravy problem solved. And now you have a game plan for making stress-free gravy and one less dish on Turkey Day!

Preheat the oven to 450 degrees. In a roasting pan, combine the turkey, onions, carrots, celery, and garlic. Sprinkle the oil, and toss to coat the turkey and vegetables.

Roast the turkey and vegetables, tossing and flipping occasionally, for up to 1 1/2 hours, or until the meat and vegetables are well browned.

Transfer the turkey, onions, carrots, celery and garlic to a large pot. Pour 2 cups of the water water into the bottom of the roasting pan and set the pan over medium heat. Bring to a boil and stir with a flat wooden spoon to scrape up and release the brown bits.

Pour the pan juices, including any accumulated fat from the pan or vegetables that stuck to the bottom, into the pot with the turkey and vegetables. Add the remaining water, parsley, thyme and bay leaf.

Bring the stock to a boil over medium heat. Adjust the heat, so the stock maintains a gentle simmer. Simmer for 2 hours.

With tongs, remove the turkey wings, thighs or chicken and discard the skin and bones. (If the meat is not too dry, you can refrigerate it and use it in soup later.)

Set a large strainer over a large container, and strain the stock into it. When the stock settles, skim off the fat with a ladle, transfer it to a bowl, and reserve it for making the gravy. If time permits, refrigerate the stock overnight. The fat solidifies and is easier to remove. Also, don’t be surprised if your stock turns into jelly overnight in the fridge.

4 cups turkey stock or store-bought, plus more if needed

Reheat the stock if you have refrigerated it overnight.

Spoon butter into a large saucepan and set the pan over medium heat. Slowly whisk in the flour, and cook, stirring, for about 2 minutes to cook the flour to make a roux..

Slowly add 4 cups of stock while whisking the roux. Simmer, whisking often, until thickened, another 2 to 5 minutes.

Add additional stock, if you like, to bring the gravy to the consistency you prefer. Add the salt and pepper and taste.

Let gravy cool for about 30 minutes and transfer it to a storage container. Refrigerate for up to 4 days or freeze for up to 4 months. Reheat in a saucepan when ready to use.

Colorado Springs gets a taste of Puerto Rican food