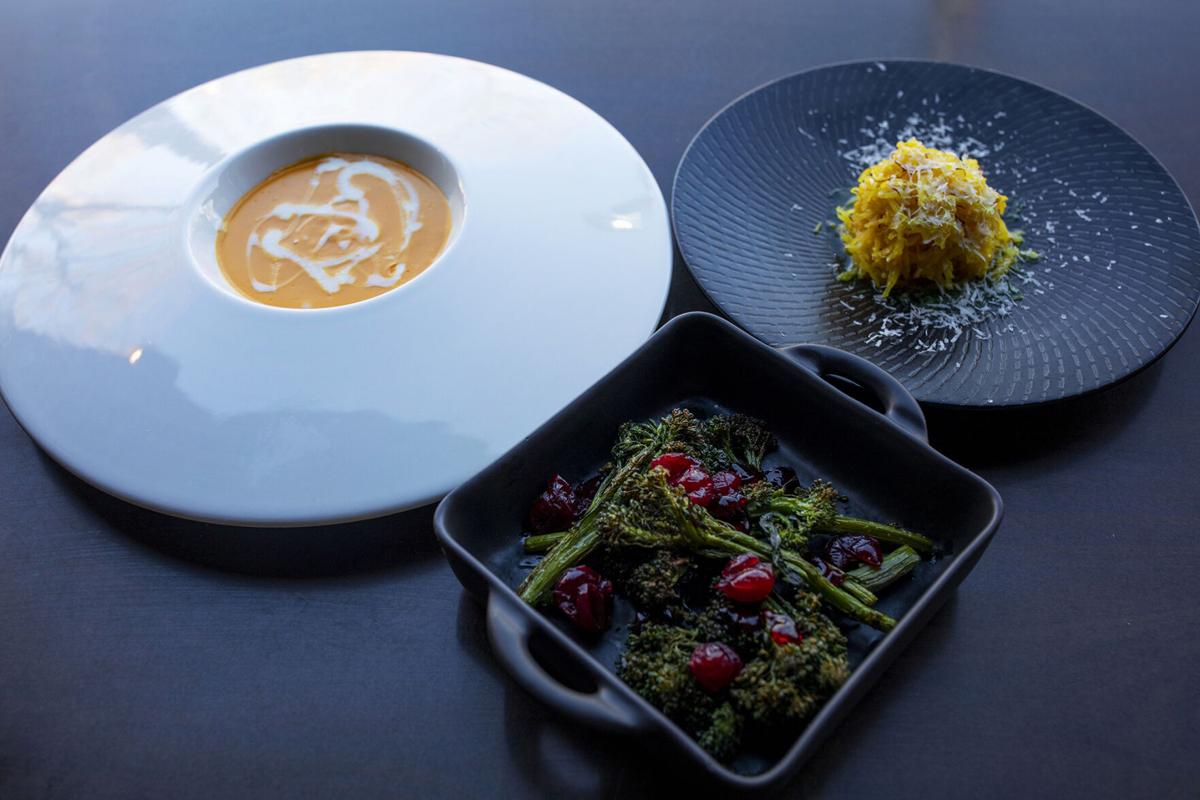 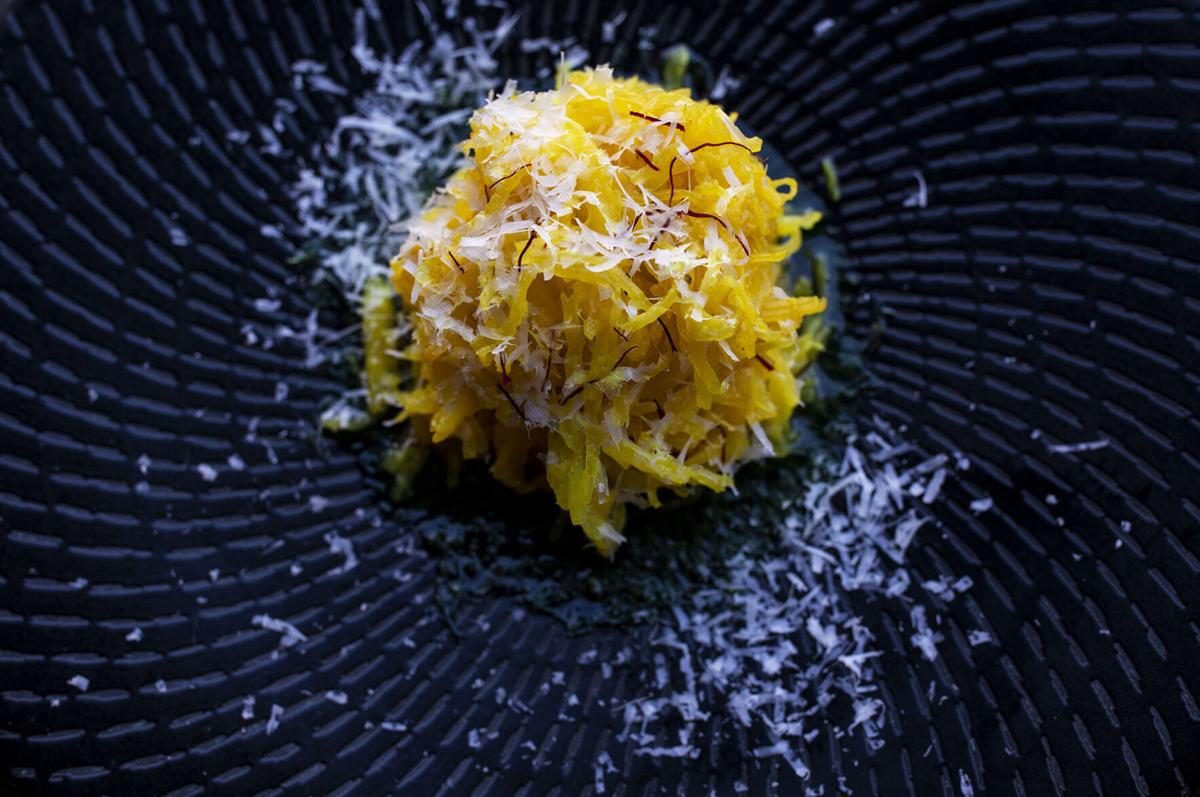 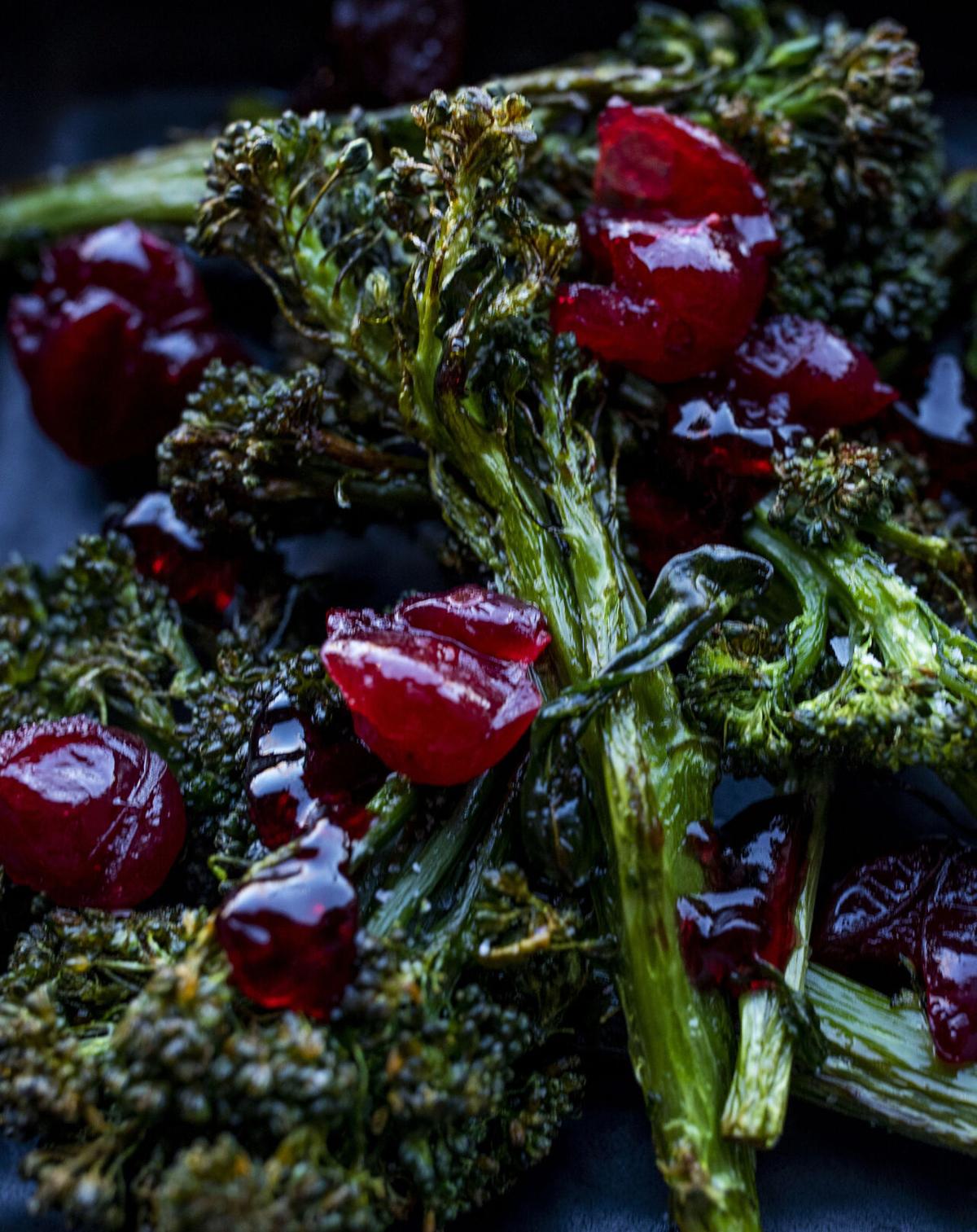 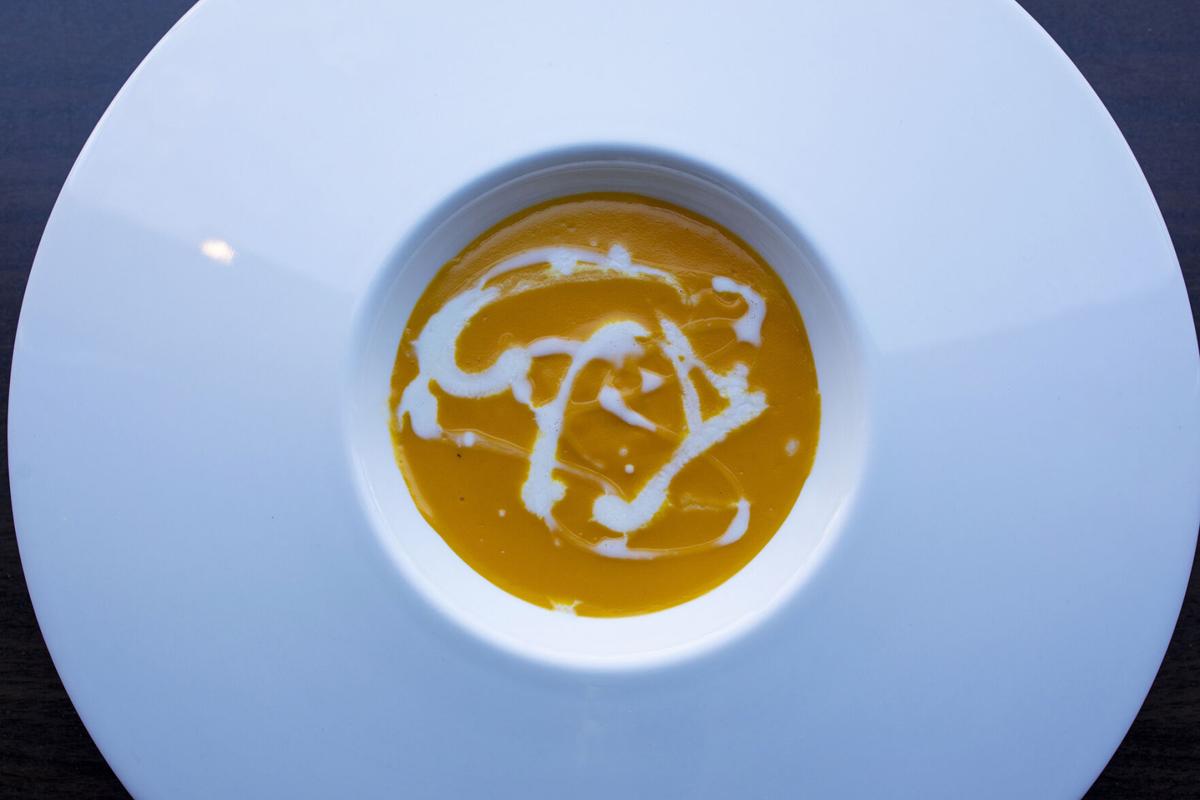 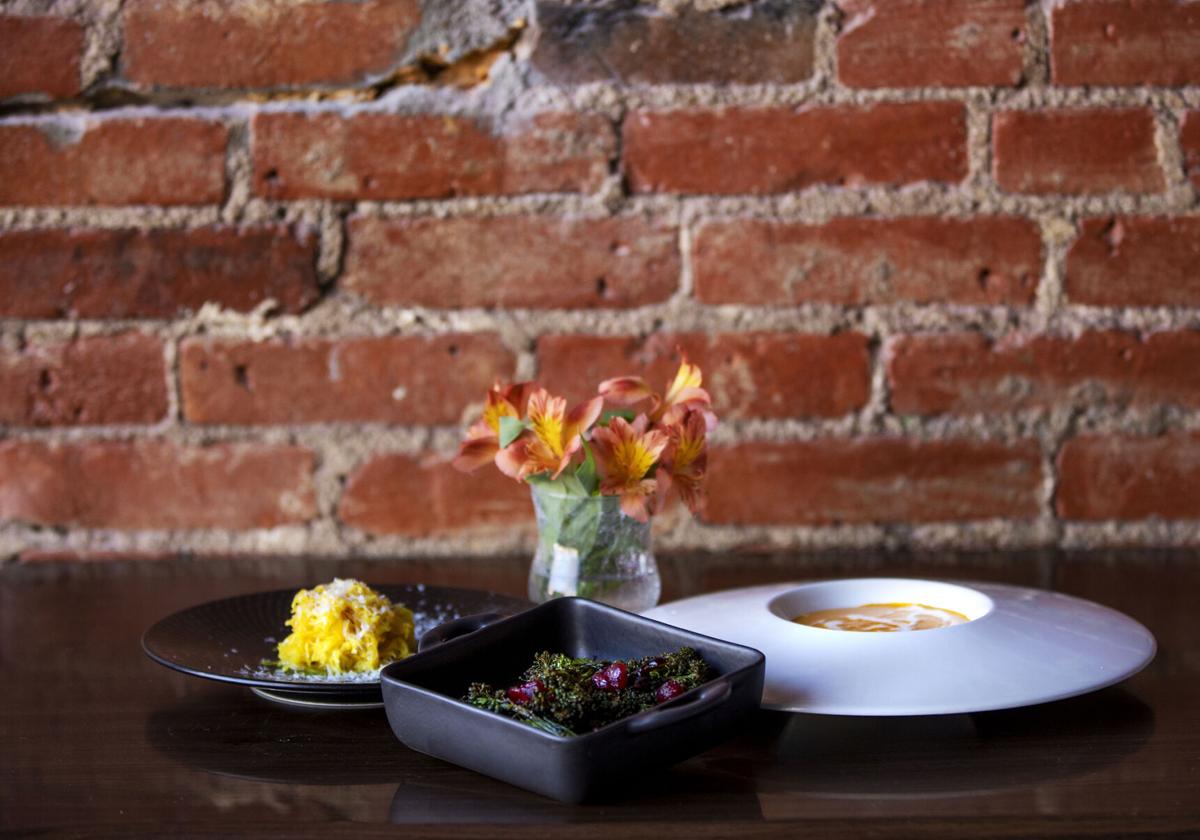 Like everything else this year, our Thanksgiving meals will likely look a little different. But whether you’ll be celebrating virtually or in person, the holiday still revolves around the same themes: family, good friends and great food.

It goes without saying that the centerpiece of the table will be a roasted turkey. But rather than fall back on classic sides — like sweet potatoes with marshmallow topping, green bean mushroom soup casserole and mashed potatoes — we wanted to explore some twists to these options and add diversity to the menu.

And who better to offer tips and recipe ideas than some imaginative local chefs and caterers?

TJ Curry, executive chef at Mood Tapas Bar, didn’t disappoint. He’s keeping the turkey offerings smaller for his family’s meal — just a breast and a couple of thighs — but the sides definitely break the mold.

“Sweet potato maple bourbon bisque, saffron spaghetti squash and roasted broccolini with cranberry gastrique,” he said, adding that “my wife is a pastry chef, so she will make dessert.”

He prepared the dishes for the accompanying photos and shared his recipes.

To speed up the preparation of the sweet potato soup, you can pull out that Instant Pot you got for Christmas last year and put it to work. You can make the soup a day or two in advance and reheat it when ready to serve.

The spaghetti squash is a good candidate for the microwave. It’s a speedy way to get the job done and saves valuable oven space for the turkey.

“Instead of making mashed potatoes ,make potatoes au gratin,” he said. “And instead of stuffing, I will make a whole grain mustard bread pudding with scallions and caramelized onions. I also will rub our turkey with a layer of mayonnaise. Since it’s made from oil and egg, the oil will help baste the turkey and the egg yolk will brown the turkey skin and get the skin very crispy.”

Brother Luck, owner and chef at Four by Brother Luck and Lucky Dumpling, called Thanksgiving one of his favorite holidays “because it revolves around food and family.” He has tasty tricks for the turkey — which he brines in molasses, orange and a touch of chipotle — but also the side dishes, which are influenced by his Southern upbringing.

“I love to braise collard greens in bacon, onions and beer,” he said. “The smell reminds me of my father cooking while the Thanksgiving parade played on our television screen. He would simmer them for hours until the greens were extra tender and succulent. I always cook them on Thanksgiving to relive this food memory.”

Instead of the traditional cranberry sauce, he makes his a chutney.

“You can use any fruit like mango and apple to add to the cranberries,” he said. “Start by sautéing onions, garlic, jalapeños and ginger. Add the fruit and deglaze with rice wine vinegar. Add some sugar for sweetness and reduce by two-thirds. It can serve warm or chilled.”

Every year, he tries making some new side dish. This year, it’ll be scalloped sweet potatoes with gruyere and Parmesan cheese.

“Slice the potatoes thin and layer with cheese and a dash of heavy cream,” he said. “Cover with foil and bake for an hour. The trick is to make these a day ahead and place a weighted pan on top while they chill overnight in the fridge. This compresses them, making it easier to cut into individual portions before reheating on the holiday.”

Ian Dedrickson is co-owner and chef at Ephemera Dinners, where he creates artistic combinations of unusual ingredients that result in spectacular-tasting dishes. He had some ideas for dressing up stuffing and mashed potatoes.

“I always hated stuffing because it’s just mushy bread,” he said. “But adding some extra flavor and texture can really make it sing. Toasted pecans and some dried tart cherries add a crunch, sweetness and a little acidity that makes stuffing really pop.”

For mashed potatoes, he always turns to his mother’s style of making them. They were his favorite part of the Thanksgiving meal when he was growing up.

“She uses red potatoes, leaves them lumpy in the mash, and adds cream cheese, garlic, and plenty of herbs,” he said. “I use rosemary, thyme and sage, and it makes for an extraordinary rich and hearty side that makes for the best leftovers.”

Kathy Dreiling, president and co-owner of The Picnic Basket Catering Co., is bringing some favorites from her family tradition to her menu.

“We will have more seafood in our holiday dishes,” she said. “Oysters in the dressing with roasted corn. Oysters Rockefeller, shrimp cocktail shooters and lobster deviled eggs. And a plum pudding. We’re going back to classic dishes that sound new.”

If you’d like to leave the cooking to someone else, you can view her extensive catering menu with these dishes and other holiday offerings at pbcatering.com.

Add butter, carrots and onion to a sauce pan on medium heat and cook until onions are translucent. Add in sweet potatoes and continue cooking. Add bourbon simmer until reduced by half.

Add in chicken stock, syrup and cream and simmer for 20 minutes or until all vegetables are soft. Transfer mixture to blender and blend until smooth then season with salt.

Cut spaghetti squash in half and scoop out seeds from inside. Drizzle each spaghetti squash half with olive oil and season with salt and pepper. Place squash skin side up on a sheet tray and roast for 35-50 minutes, or until flesh is soft and shreds like spaghetti. Scrape out squash using a fork.

For gastrique: In medium sauce pan add cranberries, vinegar, sugar, and water and heat over medium heat until simmering. Simmer for 20-30 minutes. When the mixture has thickened strain cranberries. Reserve liquid for the gastrique and the cranberries for garnish.

Toss broccolini with oil, salt, and pepper and spread over a sheet pan. Roast 8-12 minutes depending on size of broccolini and desired amount of crispiness. Drizzle gastrique over broccolini on a plate and garnish with reserved cranberries.

Your holiday gift to your senior parents—help to stay at home longer, happier

Your holiday gift to your senior parents—help to stay at home longer, happier