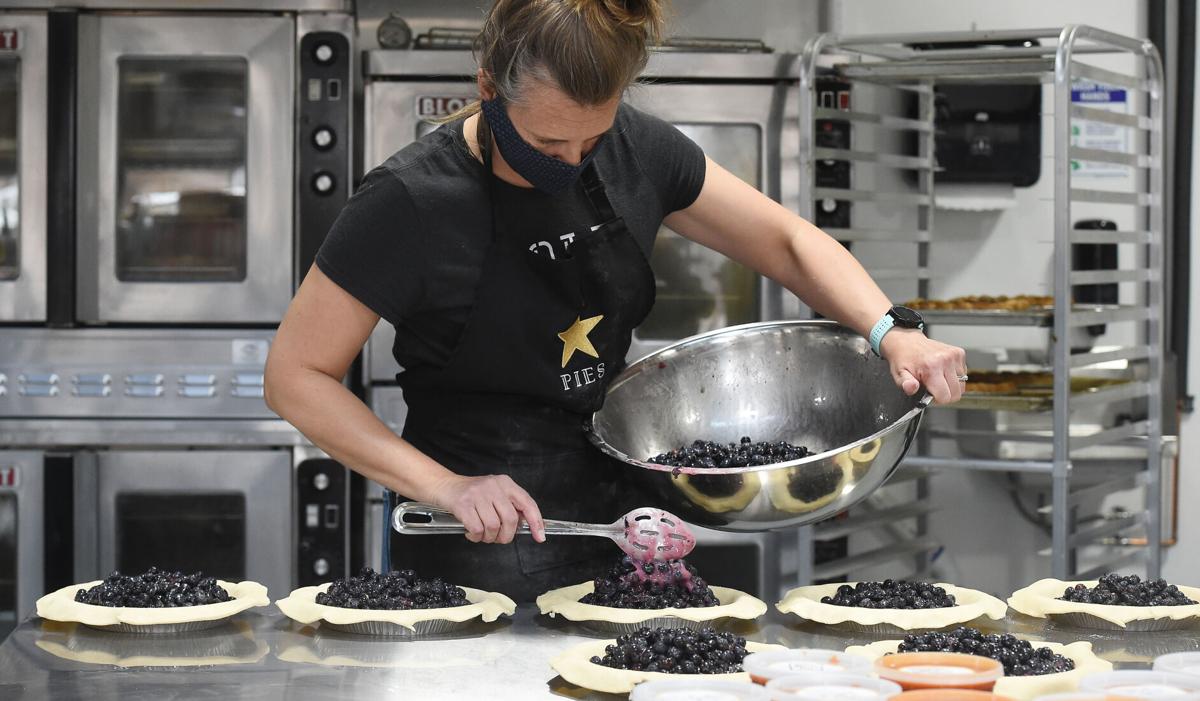 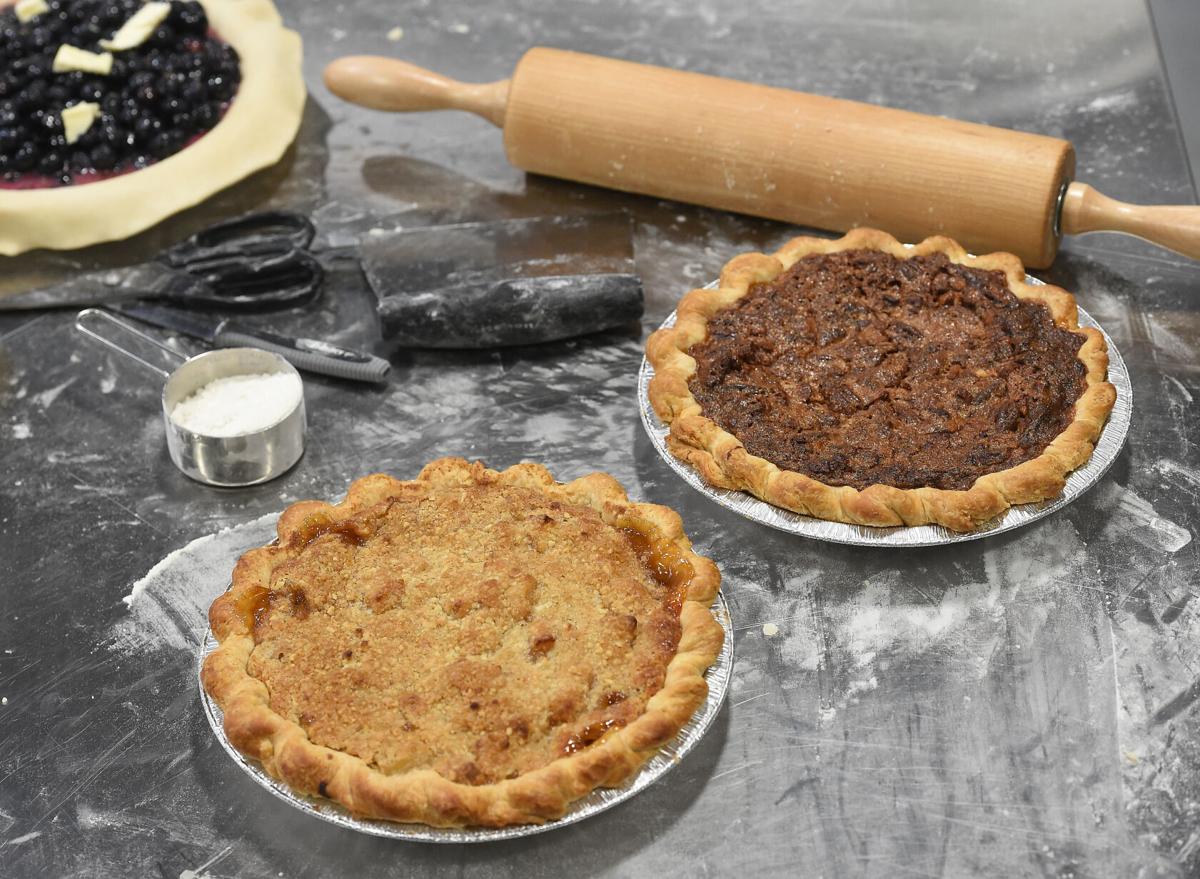 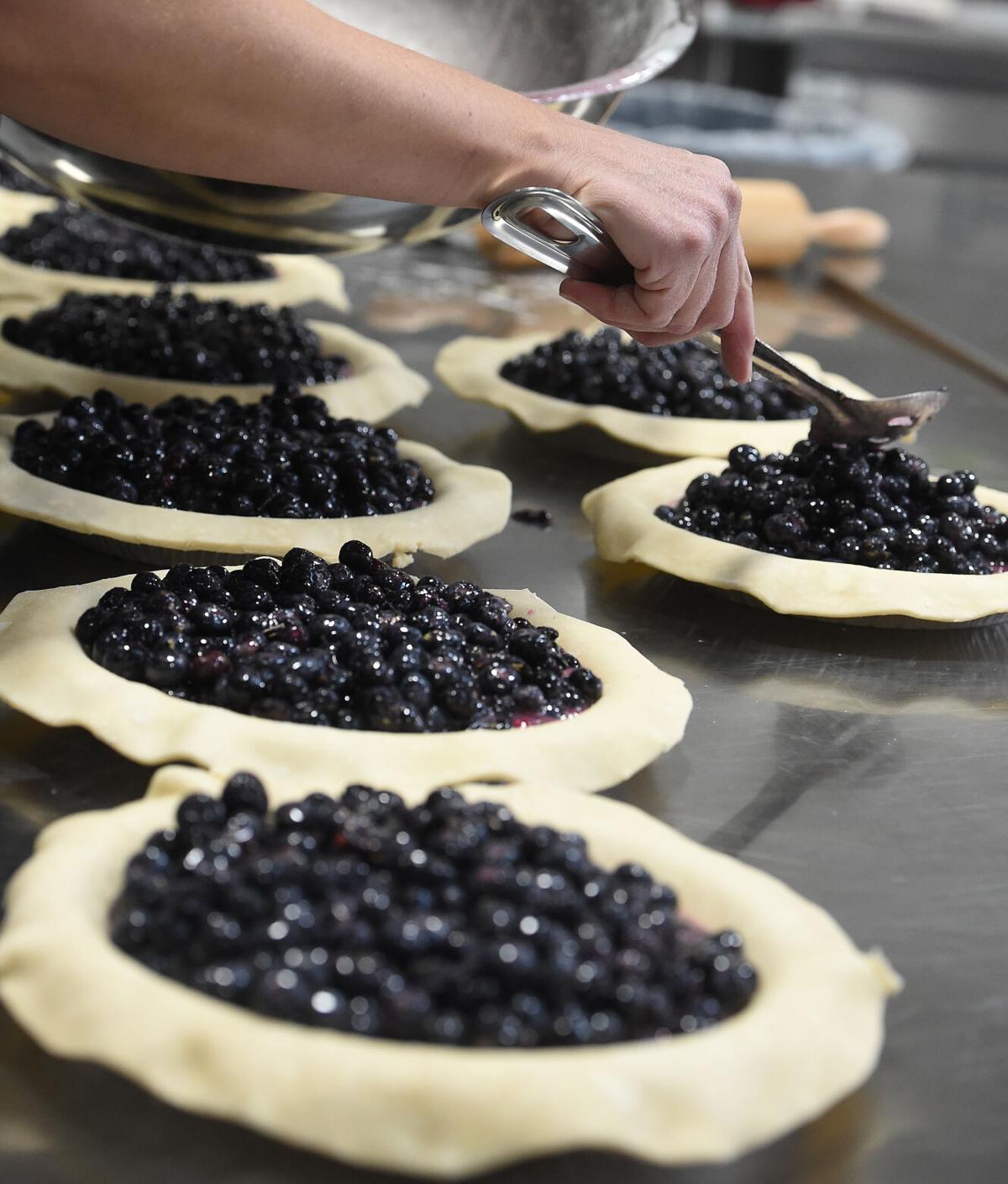 Heather Briggs launched her Gold Star Pie mobile food truck in 2016 and has since spread a love of sweet treats to hundreds of fans. 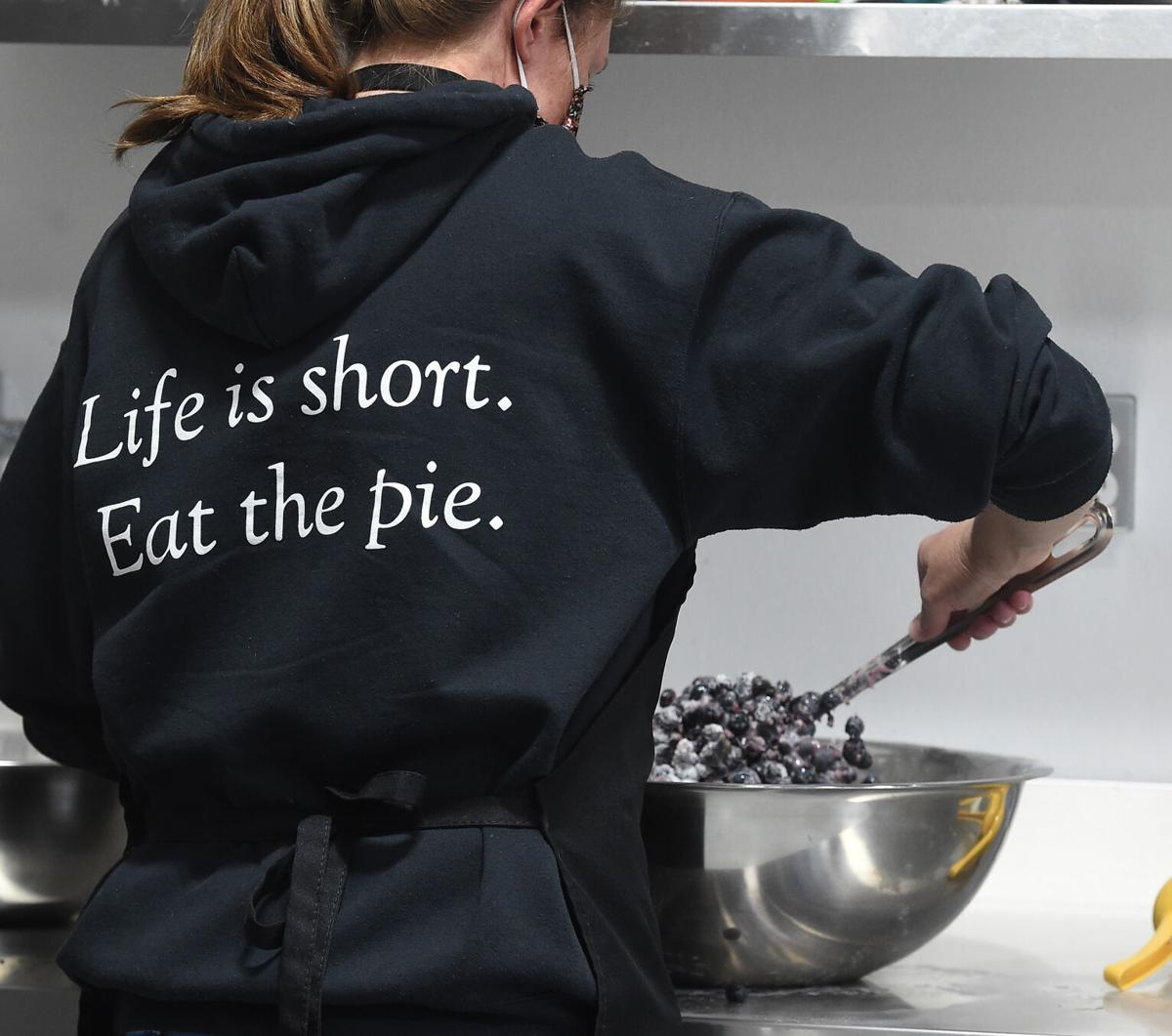 Heather Briggs sister, Tessa Flowers, helps her out at Chef’s Kitchen by stirring the filling for blueberry pies. Briggs sells a variety of pies from her Gold Star Pie mobile food truck. (Photo by Jerilee Bennett, The Gazette)

Pats of butter are put on top of blueberry pies. (Photo by Jerilee Bennett, The Gazette)

Heather Briggs launched her Gold Star Pie mobile food truck in 2016 and has since spread a love of sweet treats to hundreds of fans.

Heather Briggs sister, Tessa Flowers, helps her out at Chef’s Kitchen by stirring the filling for blueberry pies. Briggs sells a variety of pies from her Gold Star Pie mobile food truck. (Photo by Jerilee Bennett, The Gazette)

Pats of butter are put on top of blueberry pies. (Photo by Jerilee Bennett, The Gazette)

There’s no doubt that Heather Briggs has pie-making in her DNA — along with kindness, high energy and a genuine desire to help feed those in need.

The 44-year-old mother of two teenagers launched her Gold Star Pie mobile food truck in 2016 and has been spreading a love of sweet treats to hundreds of fans.

Her path to pies seemed inevitable: Her mom made cream pies for the local Country Kitchen restaurant in the early 1980s.

“I started learning how to bake pies from my mom when I was at Air Academy High School in 1992,” Briggs said. “By then, she wasn’t making them for Country Kitchen anymore, but she always loved baking and wanted to share her talents with her kids.”

Briggs has called Colorado Springs home since her family arrived here from Iowa when she was 4. She went to CSU in Fort Collins, earning a degree in English literature. After graduation she took a job at Portland State University.

“In Portland I started volunteering for Operation Frontline, which is now called Cooking Matters,” she said. “Since moving back to Colorado Springs in 2004, I still volunteer with Cooking Matters, which is currently run through Care and Share Food Bank.”

Cooking Matters is a six-week cooking and nutrition education course designed for low-income and at-risk adults and youths.

“Having a mother that was a good baker and cook, I took for granted the life skills she had passed down that are critical to health, budgeting and understanding where food comes from,” she said. “I think that being connected with the process of making good food and the time it takes to create healthy meals or beautiful baked goods is an important thing to understand, and I’m trying to pass that down to my kids.”

When she launched her pie truck, she was making the pies at night in the former Cupcake Girl’s kitchen. Just before COVID-19 hit, the cupcake bakery closed and she moved her pie-making to Chefs’ Kitchen. That increased her oven capacity, allowing her to have 16 pies baking at once.

She gets help with baking mainly from her sister and their daughters. During busy holiday seasons, additional helpers lend a hand. Anne Leonard Coniff, a friend of her sister, is one of those occasional helpers. Coniff was one of the first to sign up for the pie-making classes Briggs offered when she was starting out.

“She came to at least half a dozen classes, if not more,” Briggs said of Coniff. “She loved learning how to make pie. Eventually I asked her if she wanted to be my assistant in pie class when my sister, Tessa (Flowers), couldn’t be there. Now she comes on big production days to assist us.”

For her part, Coniff can’t say enough about Briggs.

“Her organization and execution is impressive,” said Coniff. “Where others, including myself, would feel overwhelmed, Heather buzzes with energy. She knows her kitchen and how to move pies through an assembly line. Every pie comes out unique, rustic and delicious, like it had been a solo effort. … Her sister and I have concluded Heather just works at a higher frequency. It is her nature, and it makes her a successful businesswoman. She truly loves what she does.”

Briggs is always thinking about how to keep the business rolling. For example, she used to take the winters off to winterize the pie truck. Plus, there were fewer events where she could take the truck.

But she realized that continuing to be dormant in winter would put a dent in not only the financial end of her business but her customer base, who would lose sight of her for months at a time. That’s when she dreamed up the Pie of the Month Club. In winter, she and her sister would bake limited amounts of pie and deliver them by car.

The idea worked. Initially, the club was offered January to March, and there was one delivery day each month. The club has now grown to offer two delivery dates every month, all year long, one for the north side of town and one for the south side.

Annie Moore, another friend of Briggs who has helped run the Gold Star Pie Truck, continues to be amazed by Briggs’ ingenuity.

“I can recall when she was chatting about this little dream of hers of having a pie truck and creating community around delicious pie all over the city,” said Moore. “And then she just went ahead and made it happen. She is doing such an excellent job of manifesting it all.

“Her desire to pull people together at fun venues, celebrations, giving pie away, sharing her pie skills, delivering right to your door, and doing it all with such an amazing and positive attitude just lifts everyone else up around her,” she continued. “Heather has been successful because she’s genuine, honest, true, and the world’s best pie baker.”

Place flour, sugar, and salt in a food processor. Add butter and shortening. Pulse to combine until the mixture is well incorporated but still has very small pieces of butter visible. Pour into a large bowl, add ice water, and toss with hands to combine. Do not overmix. Dough is done when a small ball sticks together when tossed in the air. Flatten into a disk, wrap in plastic, and refrigerate for a minimum of 2 hours, or preferably overnight.

Roll out ½ of the refrigerated pie crust, place into a glass pie plate, and trim the edge to 1 1/2- inches beyond the pie plate. Refrigerate until ready for filling.

In a large bowl combine the granulated sugar, salt, and cornstarch. Stir in the drained cherries, lemon juice, and vanilla. Place the filling in the bottom crust. Dot with butter.

Bake in center of the oven at 425 degrees for 20 minutes. Decrease the oven temperature to 375 degrees and bake an additional 40-45 minutes until the juices are thick and bubbly. Cool completely before serving.

This pie is also delicious topped with a spiced oatmeal topping or cobbler top.

Local couple producing all-natural jerky based on hero's they honor with their brand The Experience, a television reality show.