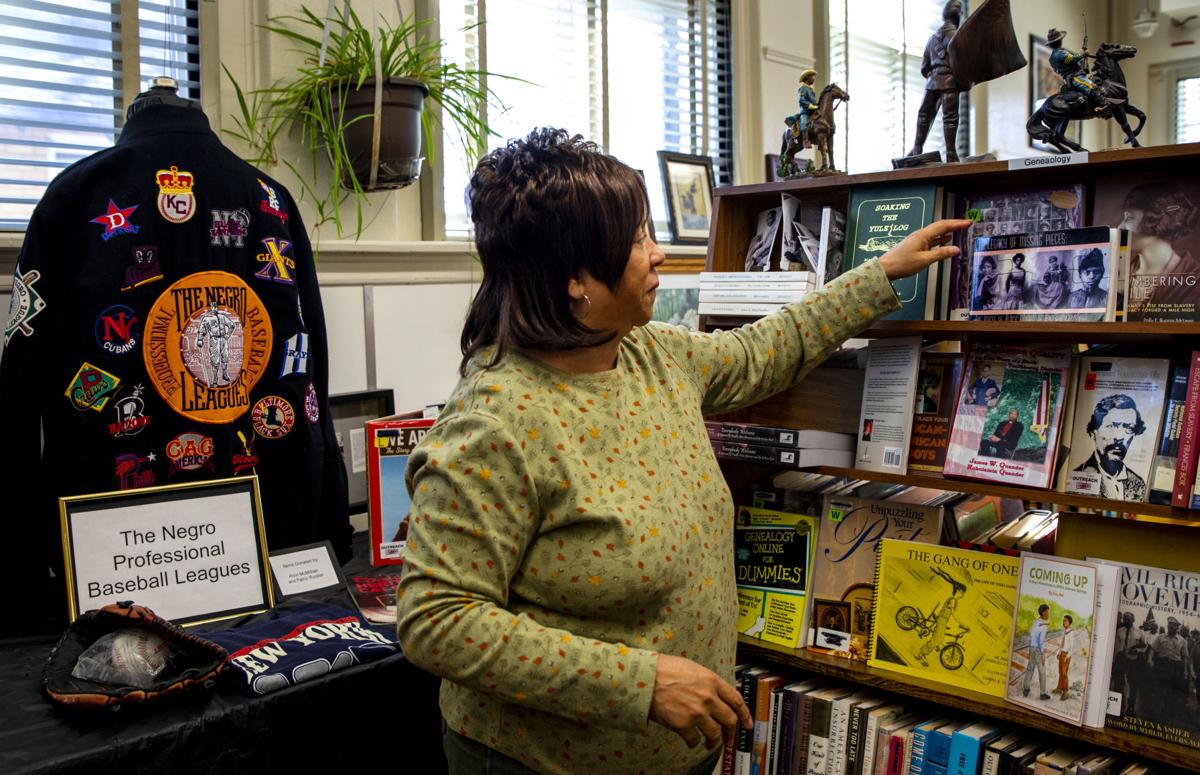 Candice McKnight, founder of the African-American Historical and Genealogical Society and curator of the African American museum in the Westside Community Center, browses through books on one of the packed shelves 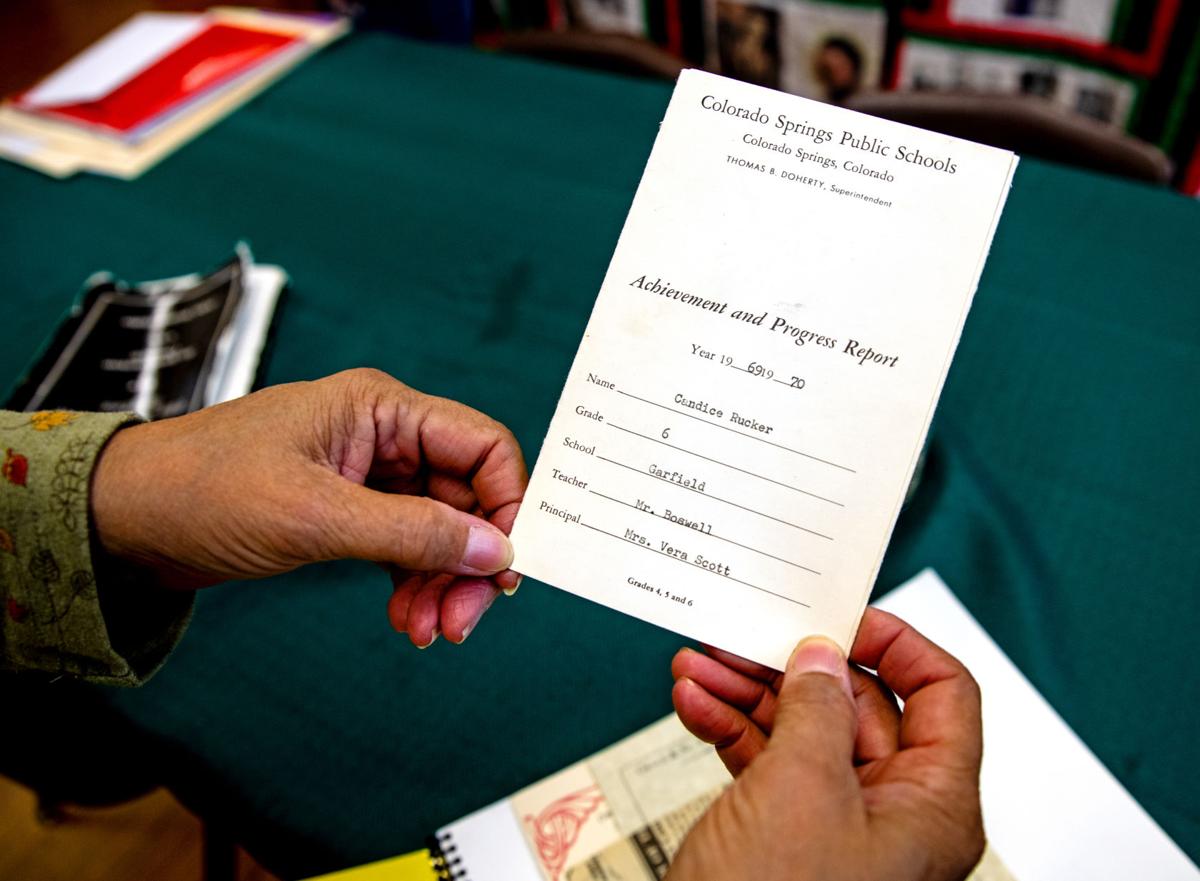 Candice McKnight holds one of her academic achievement reports from 1969-1970 when Vera Gang Scott was her school principal. Scott was the first black principal in Colorado Springs Public School 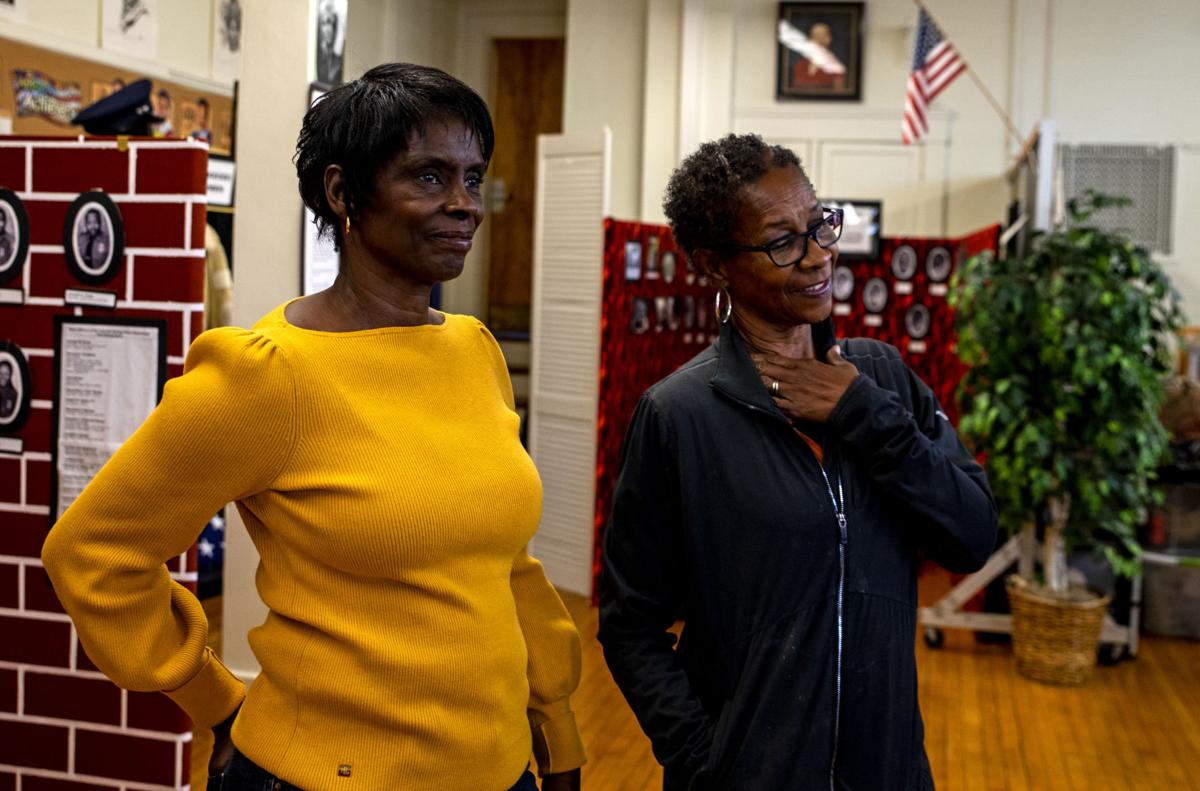 From left, Sarah Sankaouskas and Leona Abdullah-Ward listen as Candice McKnight talks at the museum in the Westside Community Center. McKnight said that the pair are her left and right arms when it comes to the museum. (Parker Seibold/The Gazette) 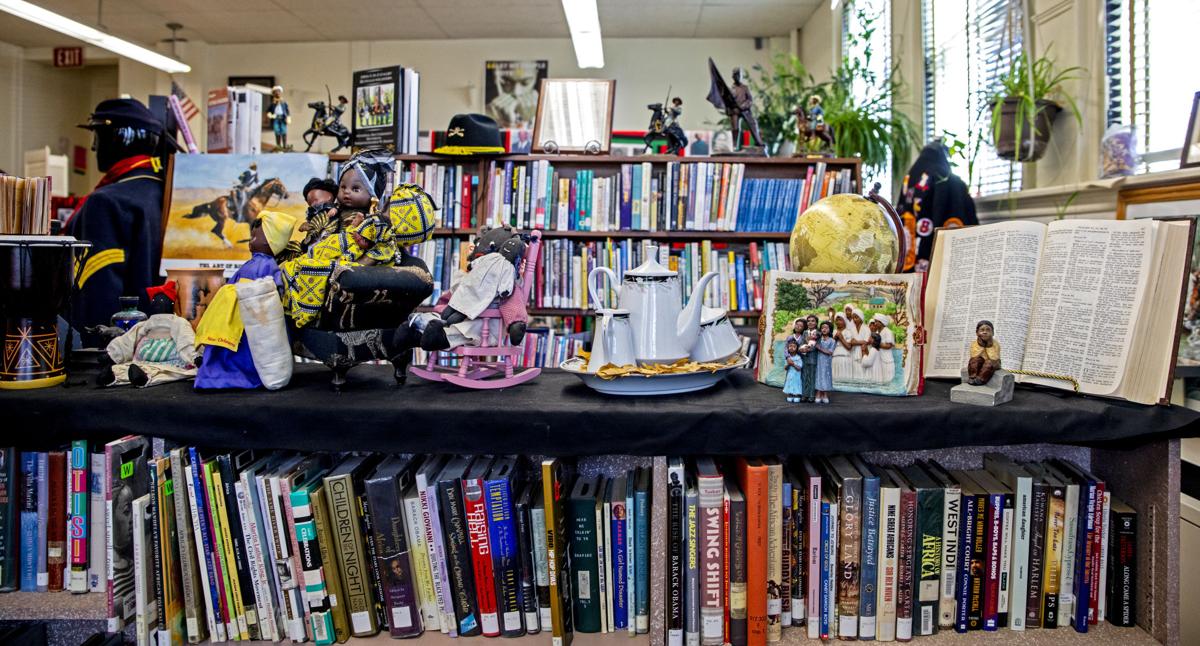 Candice McKnight, founder of the African-American Historical and Genealogical Society and curator of the African American museum in the Westside Community Center, browses through books on one of the packed shelves

Candice McKnight holds one of her academic achievement reports from 1969-1970 when Vera Gang Scott was her school principal. Scott was the first black principal in Colorado Springs Public School

From left, Sarah Sankaouskas and Leona Abdullah-Ward listen as Candice McKnight talks at the museum in the Westside Community Center. McKnight said that the pair are her left and right arms when it comes to the museum. (Parker Seibold/The Gazette)

Two friends were recently reminiscing over a proclamation by the city of Colorado Springs, recognizing their little museum’s 10-year anniversary.

“It sure is,” Candice McKnight replied. “We’ve been working hard, baby.”

The fruits of their labor are packed into a small room in a corner of the Westside Community Center. You wouldn’t know the museum was here — no sign out by the sidewalk, no announcement in the center’s halls — if it weren’t for the liberation flag draped over the door.

Through the door there’s a table, and on the table there’s a pamphlet with a message:

“Our Ancestors are calling. They want to be found.”

The museum by the African-American Historical and Genealogical Society of Colorado Springs is at the Westside Community Center, 1628 W. Bijou St., in the old Buena Vista School.

That’s what McKnight thought in 2000, when she founded the African-American Genealogical Society of Colorado Springs. Lu Lu Pollard came to her a few years later. She was one of the 1981 founders of the Negro Historical Association of Colorado Springs, and in her illness, she asked McKnight to lead the group.

So McKnight’s organization became the African-American Historical and Genealogical Society.

“You can’t have no black nothing,” said another.

But here McKnight is 10 years later alongside Sankaouskas, the artistic pal who had a similar sense of pride and a greater sense of artistry. She brought McKnight’s ideas to life, adorning the walls with faces of some of America’s most influential people: Frederick Douglas, Martin Luther King, Jr., Rosa Parks, Maya Angelou.

And all around are pictures of those who made marks locally. There’s a smiling Fannie Mae Duncan, owner of the integrated jazz nightclub whose motto became known around town through the ‘50s and ‘60s: “Everybody welcome!”

Black mannequins wear uniforms of retired servicemen, including Air Force Col. James Randall, whose harrowing story from Vietnam is told in a frame.

One exhibit honors the Springs’ black police officers, the first being Horace Shelby in 1887. McKnight believes the first black female officer to be missing.

“I need to get in touch with her family,” she reminded herself during a recent tour.

At the black firefighters display, McKnight and Sankaouskas focused on the picture of a woman, currently on staff and moonlighting as a bodybuilder.

“We’re gonna do a woman mannequin and get her uniform,” McKnight said. “Because they’re all men, see? That’s what we’re gonna do.”

They have plenty of ideas. If only they had the space.

“We need a building,” Sankaouskas said. “We’re getting a bit crammed here.”

They have two storage units elsewhere, keeping some of the 2,000 books they’ve collected but not stocked here. One on the shelf is “The Invisible People of the Pikes Peak Region,” which begins with George Motley. “The General’s Man,” author John Stokes Holley calls him. And there’s a picture of the runaway slave enlisted by city founder Gen. William Jackson Palmer, at a camp serving a white party.

“I love this book,” McKnight said, “because it talks about people from my neighborhood.”

The tour is personal from the start.

Through the door visitors are greeted by a Victorian dress made by Sankaouskas. It represents something Lucy Mae Mack Moore Vance might’ve worn upon her arrival to the Springs in the early 1900s.

That is McKnight’s great great grandmother, born in 1857 at a Texas plantation. She was laid to rest at Evergreen Cemetery, at a section where black people were buried, away from Palmer and the like.

Descended from her was McKnight’s father, whom McKnight can barely recall. She remembers holding his hand when she was 7 or 8.

The funeral brought together unknown relatives and sparked McKnight’s genealogical quest. She took classes in research and sent herself on an emotional trail, meeting wily, independent characters of the past and slaves and their owners.

Curiosity abounds at these little-known museums in Colorado Springs

So it was for Sankaouskas, who befriended McKnight after moving to the Springs in the ‘70s. She traced her family back to Joe Ramsey in the South, bearing the name of his owner. She’d drive through the region later, stopping to pick cotton to bring back to her mother. She recoiled at the sight.

Her parents grew up in those fields of Mississippi, marrying as teenagers and working up the funds to move to Detroit. It was better there, Sankaouskas knew. Still, she felt the tension in the city. She rubbed elbows with the Black Panthers and marched that April day in 1968. Dr. King had been shot.

“I always felt like I was living history,” Sankaouskas says now.

So it seemed right to join McKnight’s mission 10 years ago. On her way to opening the museum, McKnight traveled far and wide meeting relatives, once to Utah, where she had a sister she never knew. They shared the same father.

“When I got off the plane ... she just grabbed me and hugged me and kept rubbing on me and loving on me,” McKnight said. “It was just beautiful.”