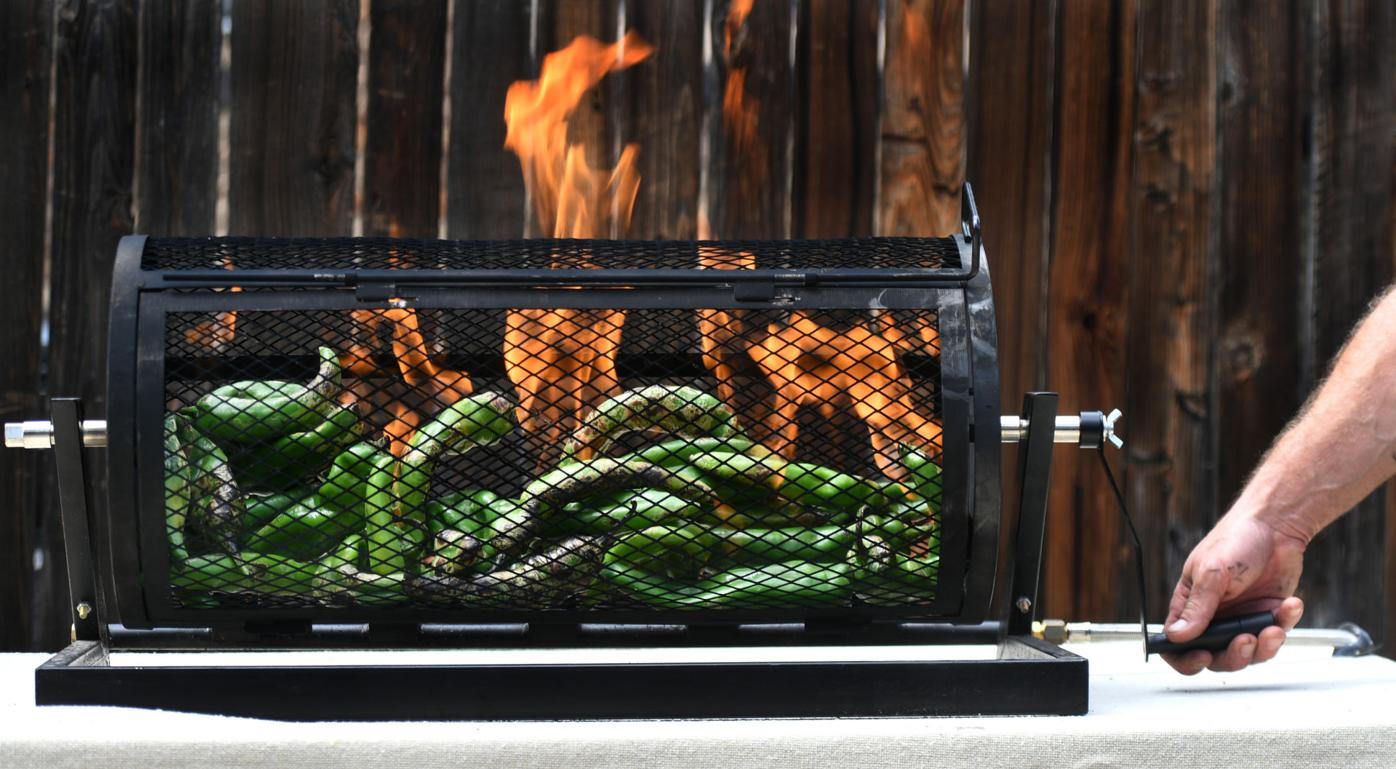 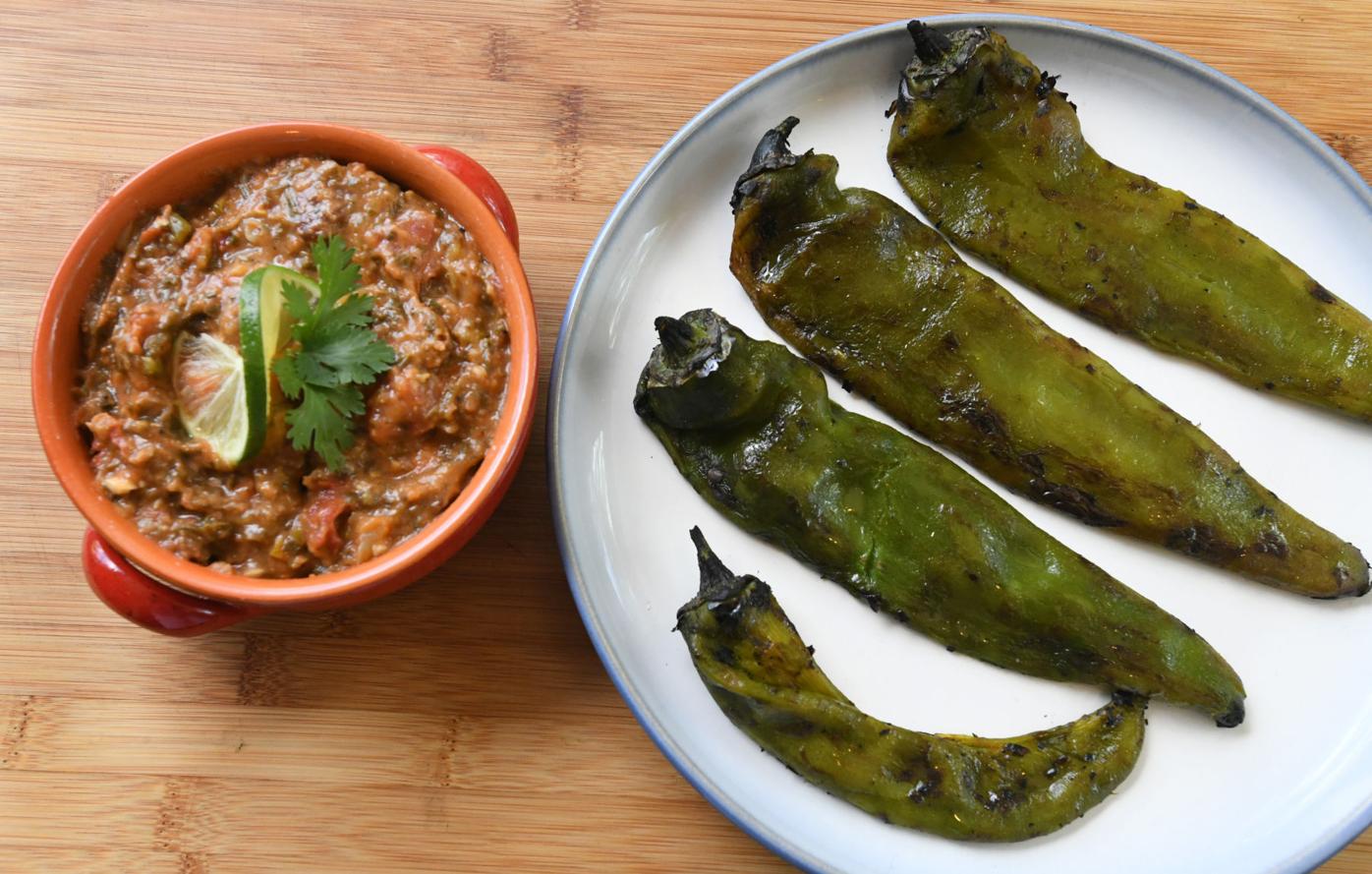 The three chiles at the top of the plate are Pueblo chiles, while the smaller one at the bottom of the plate is the Hatch chile from New Mexico.

Let the food fight begin. It’s the season when things start heating up between New Mexico and Colorado over green chiles. The two governors have thrown down the gauntlet in the debate over which state produces the best pepper. Colorado Gov. Jared Polis sings the praises of our state’s Pueblo chile, while New Mexico Gov, Michelle Lujan Grisham prefers the Hatch.

The war of words ratcheted up in early July after Whole Foods Market announced it was going to carry Pueblo chiles in most of its Rocky Mountain area stores. The governors lobbed tweets and Facebook postings, ending up with a taste-off challenge. Plans for the fiery event are still being carved out.

Of course, we’re placing our bets on the Colorado Pueblo pepper landing the top pod honors.

In the meantime, we have an update about this year’s Colorado green chile crop — and it’s not mostly sunny. Because of all the moisture we’ve had this summer, pepper crops are ripening slower, and there may be some shortages of the popular fruit.

“This has been a challenging year for chile pepper production,” said Michael Bartolo, with Colorado State University Arkansas Valley Research Center in Rocky Ford. “They typically like hot and dry weather. This year’s rains have certainly reduced the yield, and the crop is running late due to the cool spring.”

In a large Dutch oven, brown the pork in 2 tablespoons oil.

When 2/3 the way cooked, add the onion and the garlic and cook until the onions are translucent. Add flour. It will coat the browned meat mixture and turn it into a giant mass, so make sure it is stirred often or the flour will burn.

When the flour has cooked 7-10 minutes, add the chicken stock, tomatoes and chilies. Bring to a rolling simmer, stirring often at first to break up the flour meat mix. Add the spices.

Reduce heat and let simmer until the chili has thickened into a gravy consistency, then turn off the heat and add the herbs. Make sure to taste for a final seasoning.

Carla Mauro, of Mauro Farms and Bakery near Pueblo, has been raising, picking and shipping the farm’s chile crop for more than 30 years and agrees with Bartolo. In addition to planting an early summer crop, Mauro, like other farmers, planted a late crop to stretch the season’s harvest.

“My late crop was hit hard on July 20 with heavy rain,” she said. “We had 2 1/3 to 3 inches of rain in less than an hour. Then we got hit three more times with rain the next week. I lost most of my late crop. The plants were suffocated.”

If you start seeing chile roasters at farmers markets or in parking lots, follow this advice from Mauro.

When chiles are not fully ripe, they have less meat.

“They should be hard,” Mauro said. “If under-ripe chiles are roasted, once they are peeled there’s very little flesh to be found. It might look like a bushel, but it wouldn’t weigh as much as a bushel of ripe chiles.”

To learn the basics of handling chiles and cooking with them, consider taking a class with David Cook, co-owner of Gather Food Studio. He’s a big fan of roasting chiles to perfection. He bought a small, portable chile roaster, and during his class you roast chiles, peel them and prepare five chile-centric recipes. And, of course, you get to eat the spicy creations. A bonus is that you’ll take home a small bag of chiies to re-create the recipes you learned.

1 can hominy, drained and rinsed

In a large Dutch oven, brown the chorizo in oil.

When 2/3 the way cooked, add the onion and the garlic and cook until the onions are translucent. Add the flour. It will coat the browned meat mixture and turn it into a giant mass, so make sure it is stirred often or the flour will burn.

When the flour has cooked in for 7-10 minutes, add the chicken stock, tomatoes and chilies. Bring to a rolling simmer, stirring often at first to break up the flour meat mix. Add the spices and the hominy.

Reduce heat and let simmer until hash has thickened into a gravy consistency, then turn off the heat and add the herbs. Make sure to taste for a final seasoning. Garnish with diced onion and shredded cheese. Serve with warm tortillas.

Chiles are technically a fruit but act as a vegetable in our salads and curries. Perhaps some of the confusion over its identity stems from the fact that, well, chile peppers aren’t meant to be eaten by humans. Their intended target is birds.

Chiles produce capsicum, the chemical substance that is felt by our tongues as pungent spiciness. Birds can’t taste capsicum, so they are able to transport chiliepepper seeds far and wide in South America.

According to spicyquest.com, chiles — with their internal, edible seeds — are a fruit. They join tomatoes, zucchini, okra and eggplant as the most common fruits-eaten-like-vegetables. Other veggie-like fruits include basically anything that is not sweet and has seeds. Vegetables, on the other hand, are the edible parts of plants, often (but not always) lacking seeds.

The sight of a Ferris wheel in the night sky makes me smile -- especially if I’m in Pueblo.