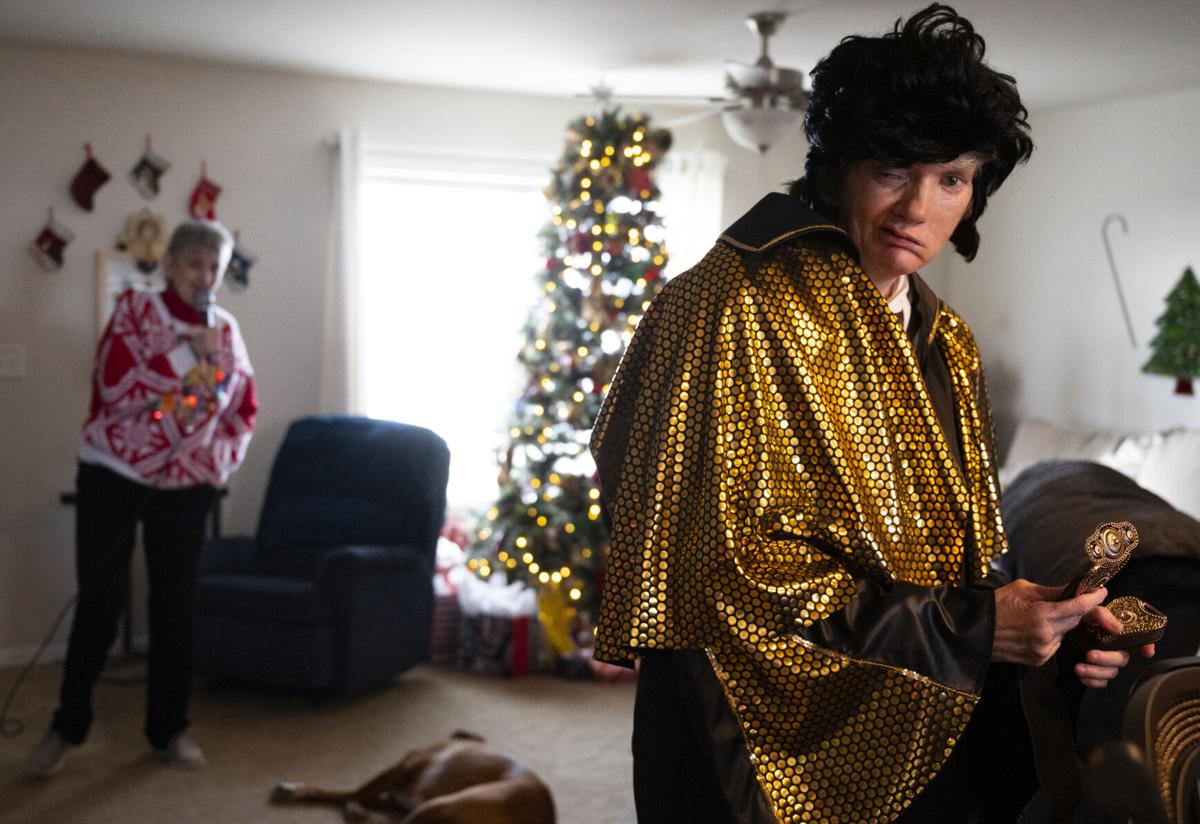 JR Hastings, dressed as Elvis, puts on his outfit before singing karaoke. 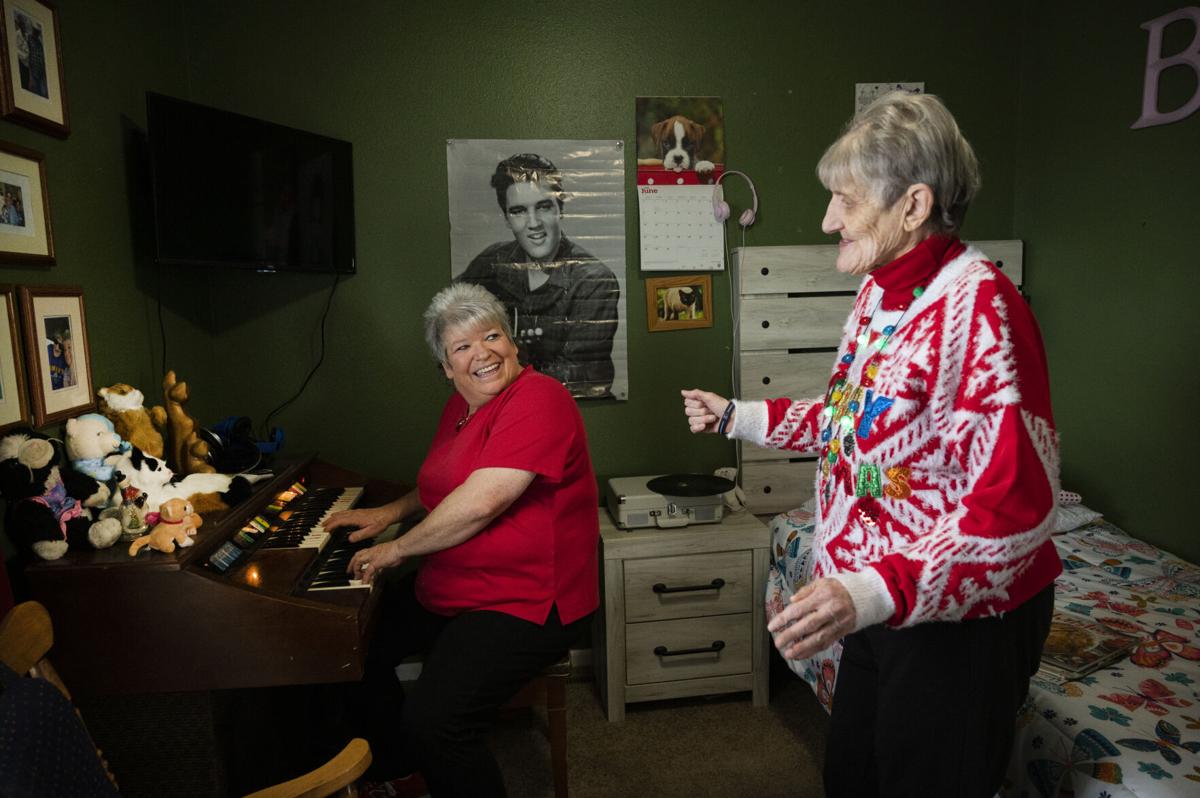 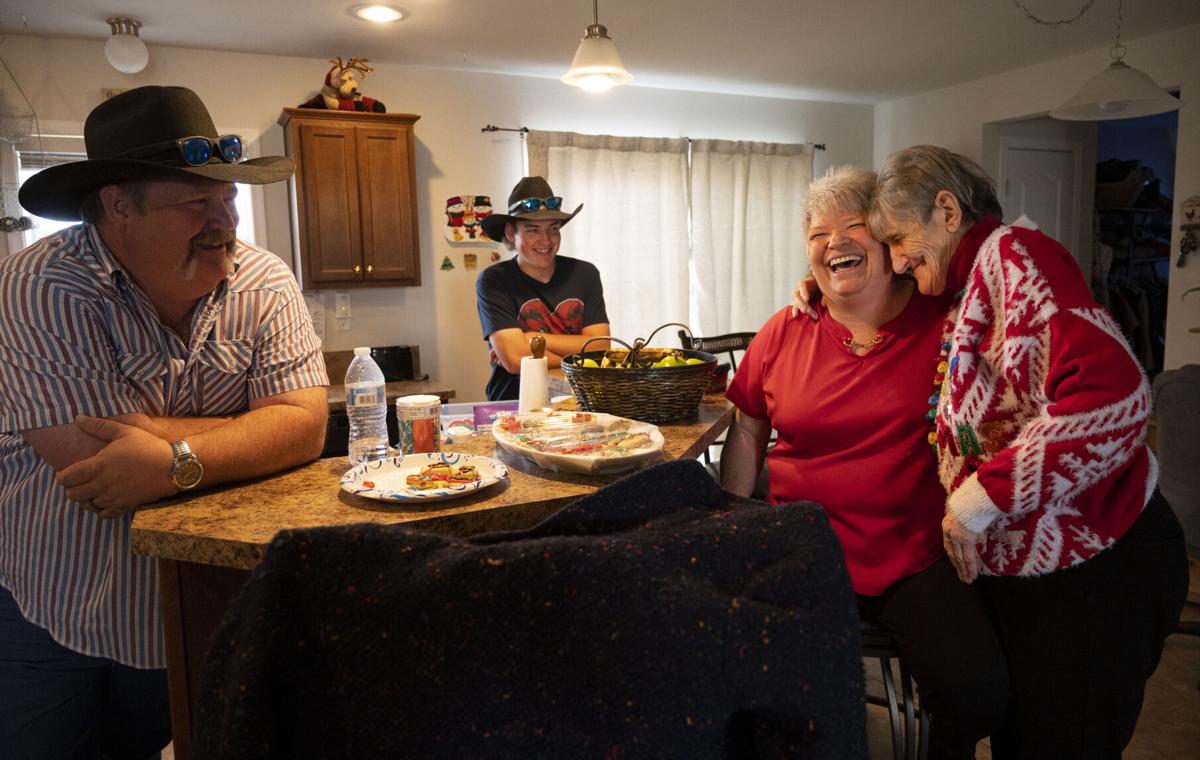 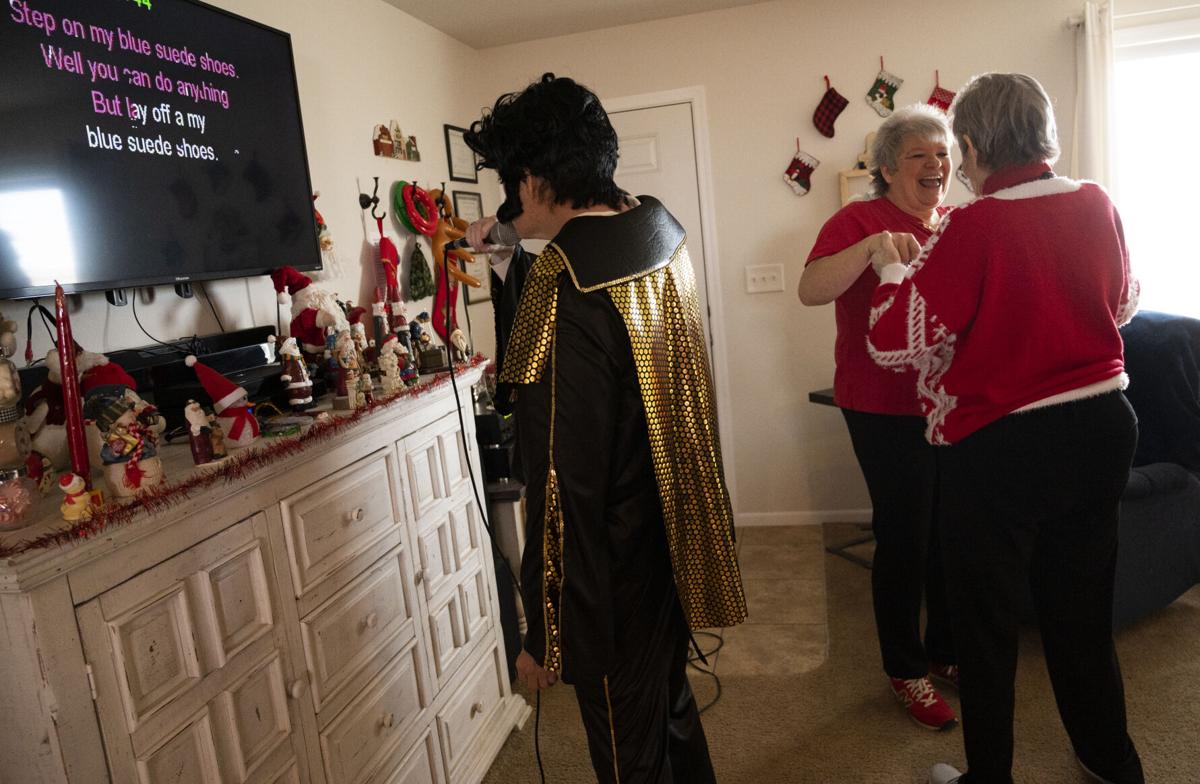 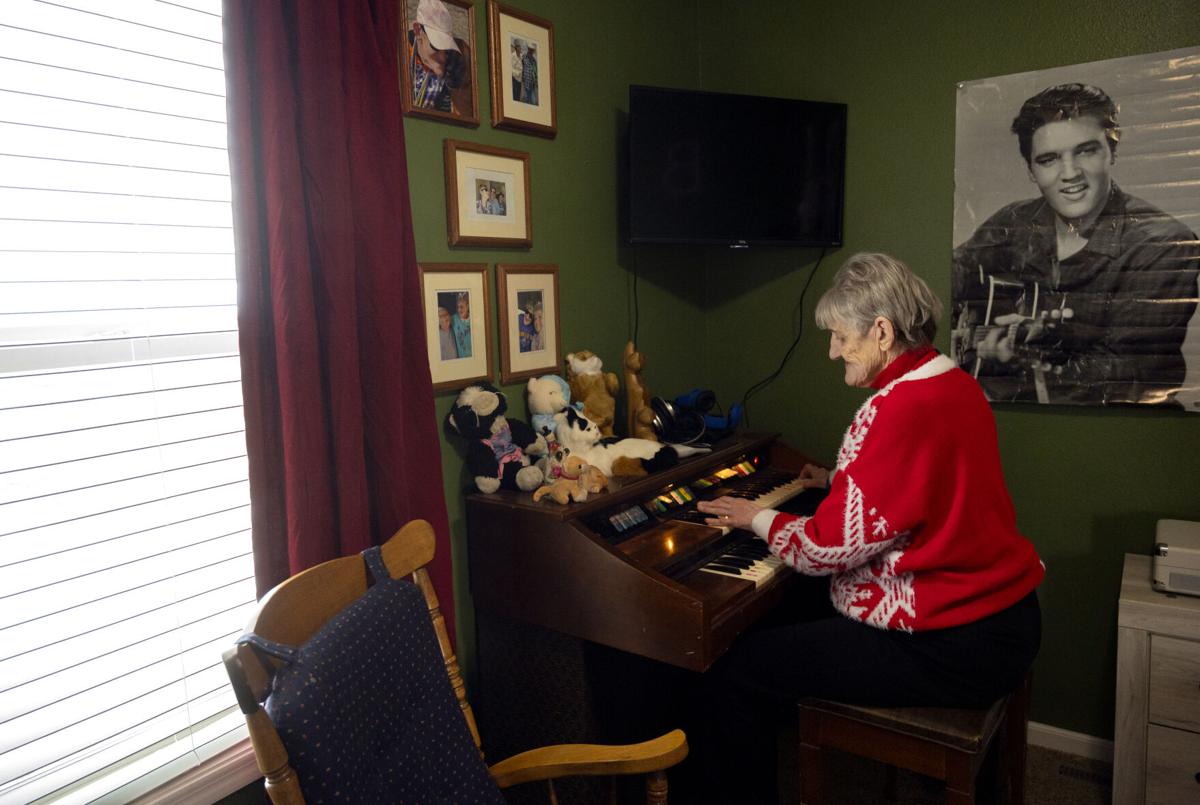 Resident Bea Pistoria, 79, plays her organ in her room at the Country Roads Host Home in Calhan on Dec. 17. Pistoria has been living with the Walker family since April.

JR Hastings, dressed as Elvis, puts on his outfit before singing karaoke.

Resident Bea Pistoria, 79, plays her organ in her room at the Country Roads Host Home in Calhan on Dec. 17. Pistoria has been living with the Walker family since April.

CALHAN • Nobody in this makeshift family has enjoyed a Christmas like this in a long time. Not Rob and Donna. Not Bea. Not JR.

This Christmas season, for them, is brighter than usual. Because 2020 wasn’t all bad. It’s the year that brought these four together in one house.

In this house, Bea plays her organ and gives out hugs and sometimes wears her medals from the Special Olympics. JR can dress up as Elvis anytime he wants and sings karaoke in the afternoon. He’s stopped playing video games all day, in favor of going on walks and helping on the farm. Together, they bake cookies and wear Christmas sweaters and occasionally look over at how many presents they have under the tree. When Bea, who is 79, asks if she’ll ever have to move out, Donna Walker shakes her head and says, “This is your home. This is your forever home.”

Finding a forever home takes time. Donna and husband Rob Walker had to build it first.

The couple spent past years trying to make the holidays special for residents at nursing homes. They went above and beyond.

They took residents on trips to Las Vegas. Wrapped presents for everyone. Rob constructed a Santa sleigh. Donna always dressed as Santa and wore a big smile. Underneath, they were both running themselves ragged.

“It’s terrible to say I got burnt out on Christmas,” Donna says, though it’s how she felt at the time.

After 15 years working in long-term care, mostly with adults with dementia and disabilities, Rob and Donna got burnt out on all of it. Caring so much and seeing others who didn’t care nearly enough. Overworking themselves each day just to wonder, “What more can we do?” It got so bad that Donna felt physically sick going to work in the morning. They quit their jobs in early 2020, as nursing homes around the state saw tragic COVID-19 outbreaks.

They kept trying. Rob and Donna, along with their 18-year-old son Taylor, turned their 40-acre property in Calhan into a host home, welcoming residents in need to live with them full time. They opened Country Roads Host Home, with help from an agency called Common Roots, in April, when Bea moved in.

She had spent the previous year being shuffled around to 10 nursing homes. Not everyone knows how to care for Bea, who is developmentally disabled and, as Donna lovingly says, “wakes up talking and goes to bed talking.”

But Donna knows how. Donna always listens. Donna always lets Bea rest her gray-haired head on her shoulder. She tells Bea to “shake it” when music plays on the stereo. She tells her she can have as many cookies as she wants. When Bea talks about her hips hurting, Donna wraps an arm around her and nudges, “I know, but are we just going to talk about our pain?” Bea calls Donna her best friend. And says she’s like a mother to her, even though Bea is nearly 30 years older.

“I’ll do anything I can so that she feels comfortable and safe here,” Donna says. “That’s making a difference in her life.”

For Bea, Christmas can be a blur of memories. In recent years, she’s asked for her mom and dad, who died years ago. Her new home, though, is decked out in Christmas decorations and there are lights around a tractor outside. It reminds Brea of being a kid on Christmas morning. It reminds her to be happy.

“That’s the whole goal,” Donna says. “Seeing their excitement is what I live for.”

She means it. Donna has always been a helper. She’s won awards for it. Once, in sixth grade, she heard a neighbor’s husband had died. Teenage Donna started going over there to watch TV and share meals with her, anything to keep the woman company.

“I feel for some reason I was put on this earth to help everybody I can, especially the elderly,” she says. “Helping people just warms heart.”

Her caring heart is contagious, at least when it comes to Rob. They met 30 years ago when Donna went to a country bar by herself just because she wanted to dance.

“He asked me to dance and we’ve basically been together ever since,” Donna said.

Along the way, they’ve found a passion together in caring for people. And they’re good at it.

“I can’t imagine doing anything else,” Rob says. “These are people who can do anything they want. They just need help doing it. Why shouldn’t I be the person to help?”

He and Donna feel a huge sense of relief after starting the host home. They’re both genuinely excited for Christmas. You’d almost think they’ve retired, even though their days are jam-packed and they have little privacy. Bea and JR have their own bedrooms, while Rob and Donna sleep on an air mattress in the living room.

“They are family to us,” Rob says. “They’ll probably be with us forever.”

At Country Roads Host Home, there’s no schedule like there might be at a larger facility. Every morning, Donna asks, “What should we do today?” That could lead to taking a scenic drive or going fishing or making a gingerbread house

For JR, who loves Elvis so much that he goes by the name Elvis, a good day almost always involves karaoke. His favorite tune is “Blue Suede Shoes,” which gets Donna and Bea to dance along in the living room. When the song changes to “Amazing Grace,” the room might fall silent.

“I once was lost,” JR quietly sings, moving close to the TV screen so he can see the words. “But now I’m found.”

This might as well be their house theme song. Because, amazingly, they’ve all found each other. And together, they make every day feel a little like Christmas.

When Travis Coleman arrived at the Pikes Peak Historical Street Railway Foundation in Colorado Springs last month, he was in for a pleasant surprise.