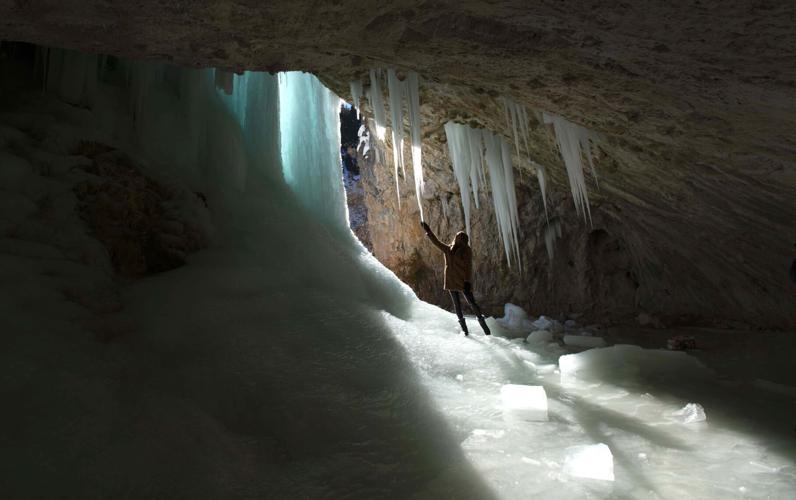 Alejandra Martinez of Atlanta touches an icicle while exploring the Ice Caves in Rifle Mountain Park outside Rifle. 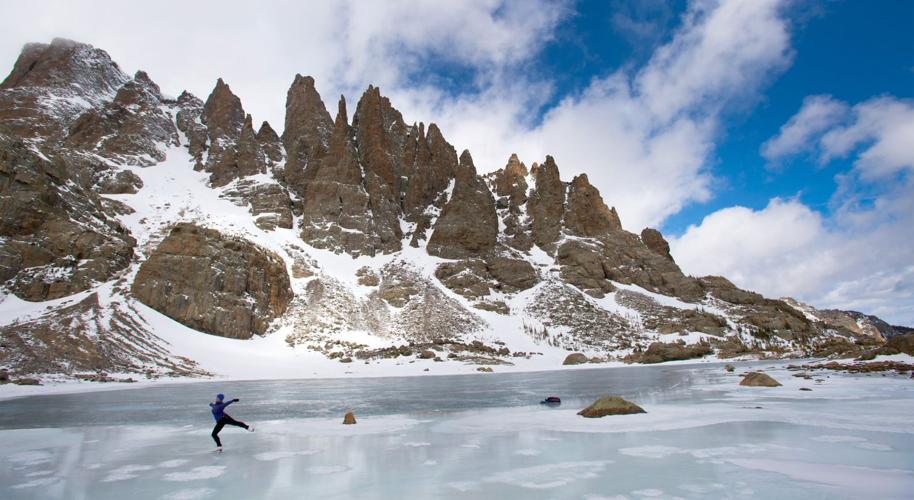 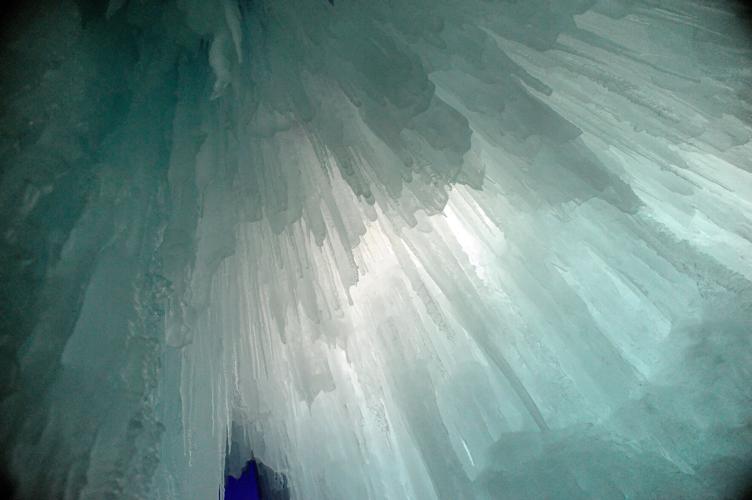 Icicles hang from the ceiling on an ice cave at The Ice Castles at Silverthorne, Colo. Tuesday, Jan. 3, 2011. The ice formations change from day to day as the sun can melt the ice during the day and more ice is created at night with sprinklers. The exhibit is 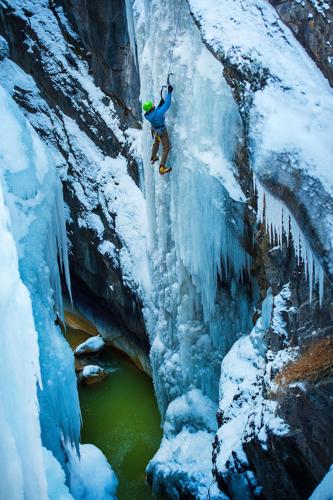 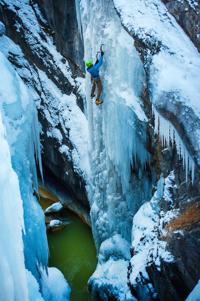 An ice climber works his way up a route in the Lower Bridge area of the Ouray Ice Park on Jan. 14, 2018.

Alejandra Martinez of Atlanta touches an icicle while exploring the Ice Caves in Rifle Mountain Park outside Rifle.

An ice climber works his way up a route in the Lower Bridge area of the Ouray Ice Park on Jan. 14, 2018.

It’s the soft stuff that rules. That powdery snow that conjures skiing dreams as soon as the air gets nippy.

But in no certain corners of Colorado, a hard element is equally cherished.

Unlike skiers, it’s not a bluebird day that’s desired. Bring on the cloud cover, say ice climbers and ice fishermen and ice skaters and any other strain of this state’s colorful, ice-craving enthusiasts, from car racers to boat sailors also playing on rock-solid caps that melt under the sun.

There are hockey players, too. There are sculptors, too. There are everyday sightseers who long to admire ephemeral beauty that lasts only so long in these great outdoors: massive waterfalls gone breathtakingly silent, and caves and canyons transformed into blue, sparkling wonderlands.

Bring on the freeze, they all say.

We’re embracing the cold like never before in our annual guide to Colorado winter. Yes, we’ll have plenty of skiing in this magazine. We’ll ramp up the temperature when it comes to hot springs. We’ll even take you to places around the state where you might escape winter.

Frozen in time: A brief history of ice harvesting in Colorado

As Colorado was coming into shape as a state, so too were blocks of ice cut from lakes, ponds and streams. Residents, after all, needed a way …

But all the while, we’ll be making stops at the ice that is as core to Coloradans as the world-famous slopes. In fact, the demand for ice in this state long predates that for chairlifts.

Just as men rushed to these mountains for gold, they toiled on frozen waters with tools for carving out blocks. Ice houses popped up around the Front Range, built for storing the product needed by homes and businesses through the summer.

In 1860, ice was so hotly desired it inspired devious behavior. An ice harvesting company in Denver posted a $100 reward in the Rocky Mountain News: “We will pay the above reward for the detection of the person or persons that are in the habit of breaking into our ice house on the bank of the lake above town.”

These days, while ice production has evolved dramatically, many still hold ice as dear as ever.

Take, for example, those who know the astonishing beauty of frozen lakes and waterfalls. Or those who know about Rifle’s ice caves on the Western Slope — just one cavernous wonder painted by Mother Nature in slippery, magnificent blue.

Or take the thousands who flock to an odd festival in honor of a frozen dead guy. Or the thousands who long for a return of the Cripple Creek Ice Festival. The formerly annual event celebrating icy artistry has yet to commence since the start of the pandemic.

Or take, for example, Jay Karst and Grant Wilson. Ice climbing has long been their way to satisfy adventurous, goal-oriented appetites.

“It started being objective-driven,” Karst said from his Colorado Springs home. “But I’ve reached a point here in the last five years or so where it’s started to be more about the camaraderie and the deep relationships you develop when you share a rope with someone on frozen water that could melt out at any time.”

Said Wilson, a Denver-based climber: “You’re in this entire world that’s this sphere of about 3 feet around you, and nothing else matters, and you don’t hear anything else. It’s a peace of mind that I just don’t think you can get anywhere else.”

It’s a thrill as well. A thrill like the one a few brave boaters have gotten over the years at Dillon Reservoir in Summit County. They fix metal runners under their hulls and let the wind take their sails.

“It’s just crazy,” Tim Seeling said. “I mean, your butt is only 6 inches off the ice, your head is maybe a foot off the ice, and maybe you’re going 80 mph.”

Anglers prefer the slow lane. They’ll bundle up, drill a hole and take a seat atop frozen lakes, waiting for a bite on the line.

“You can look down at that hole and it’s like watching an aquarium,” said Robby Richardson, a guide based in Gunnison. “You see the fish come up and approach your bait. ... It’s kind of captivating getting that perspective that you can never get on a boat or from shore.”

He’s seen his sport “explode” in recent years, as have ice climbers. Some credit that to the rise of a premier venue in southwest Colorado: Ouray Ice Park.

Every winter, thousands descend upon the town tucked in a box canyon, where ice is farmed to create towering curtains and daggers. Visiting climbers have helped to enliven Ouray’s once-dead low-season economy.

“It is a precious asset for the city of Ouray and I would argue for the state of Colorado. There really is nothing else like it,” Ouray Ice Park’s executive director Peter O’Neil said. “It is precious, and it depends on two things: water and freezing temperatures.”

6 hikes to frozen lakes around Colorado

He hopes to have figured out the first with a water supply replacing the town’s dwindling tank. As for the temperatures, O’Neil can’t be sure.

“City Council got all sorts of complaints in late December (last year) because the ice park wasn’t open,” he said. “Talk to people who’ve been around 10-15 years, they will tell you we’ve been opening later every year.”

It certainly seems that way to those tending to what’s considered North America’s biggest lake groomed for skating. Last year in Evergreen, Zamboni-driving Heart Cameron and his crew missed the goal of getting families on the ice by Christmas — a tradition as old as 1928, when Evergreen Lake was dammed.

“When I first started here, we would start seeing it freeze up toward the end of October,” said Cameron, who’s been on the job more than 20 years. “Recently, it’s gone deep into November.”

People around town couldn’t remember a time the lake thawed in December, as it did last year.

“Climate change is impacting us significantly,” said Kendra Head, who has organized annual bike races on the ice.

Donny Cryer feels it on Georgetown Lake. He’s president of a club that for decades has rallied dragsters, trucks and rigs for racing on the frozen sheet.

It didn’t freeze deep enough last winter. The races were called off.

“We had to cancel the entire season in 2018 and then this past season,” Cryer said. “That’s two seasons in the past five years, whereas prior to that they had raced 40 years and no issues.”

Meanwhile, in his past five years of ice climbing, “I have seen significant changes in how much ice comes in, when it comes in and just the overall condition of it,” Wilson said.

His comrade Karst agreed. “I’ve seen climbs come in and melt out in just a few days,” he said.

And so their resource feels all the more precious. Precious like that seasonal phenomenon at Rifle Mountain Park.

Come winter, water falling and flowing through the limestone domain freezes to create the fantastical scene known as the Ice Caves. “Otherworldly” is how Tom Whitmore describes it.

Rifle’s parks and recreation director called it a treat for locals and visitors alike. It was, he said, a wonder that appears only so often.

“People make multiple trips up there in the winter,” Whitmore said. “They want to see it before it starts thawing again.”

9 things to know about ice safety

For decades, ice skating at Evergreen Lake has been an iconic way to experience Colorado winter. Here are some other outdoor venues around the state:

Bring on the freeze: Gazette's annual Winter Fun Guide is embracing the cold like never before

9 things to know about ice safety

The Colorado speed sport like nothing else: Ice boating