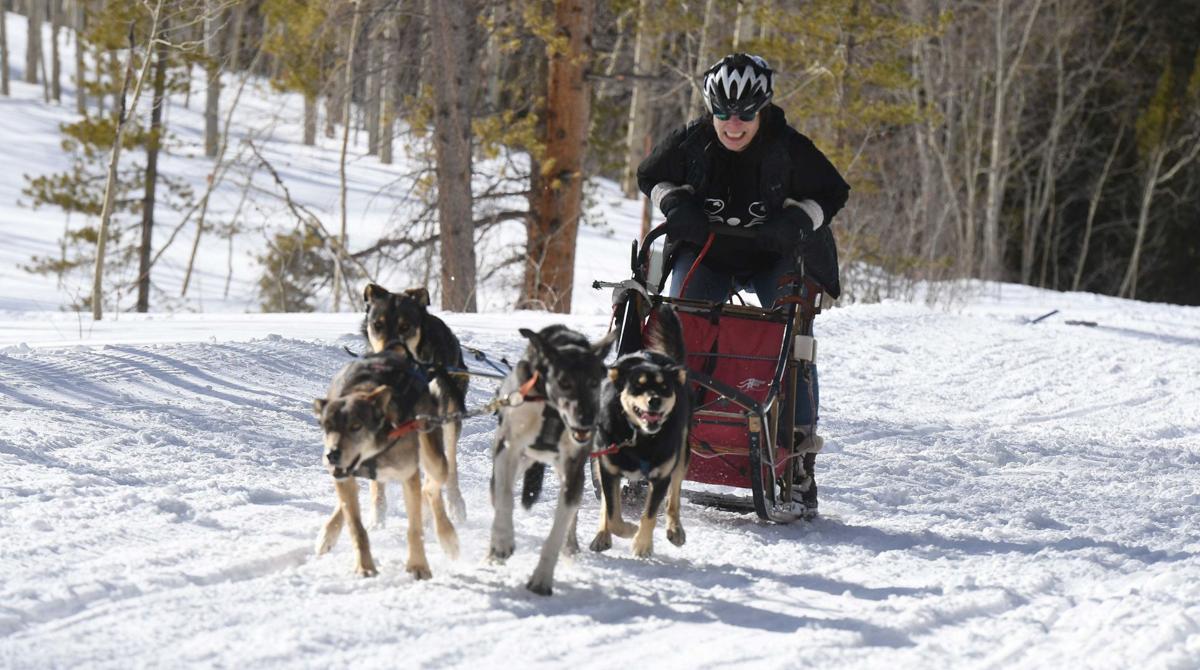 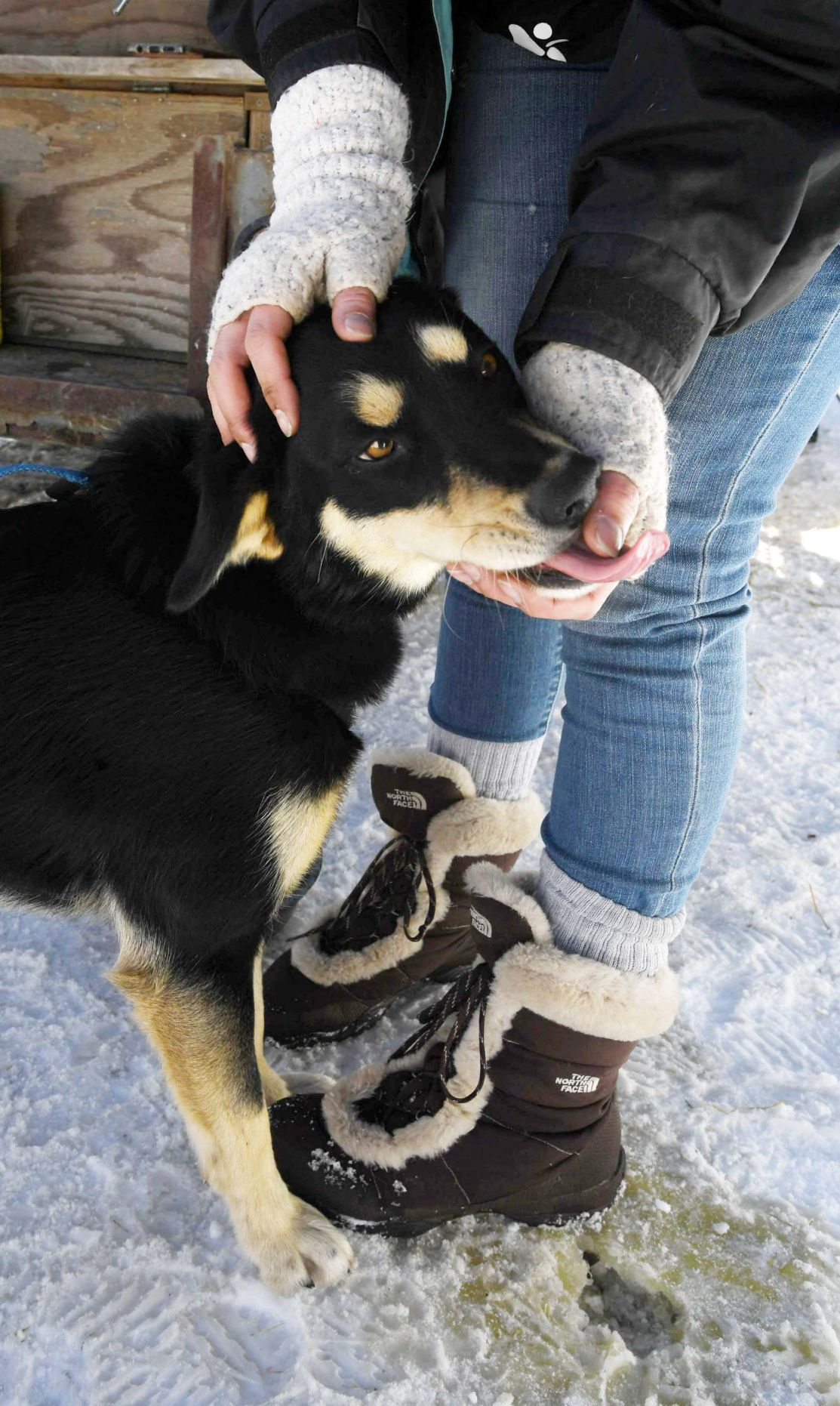 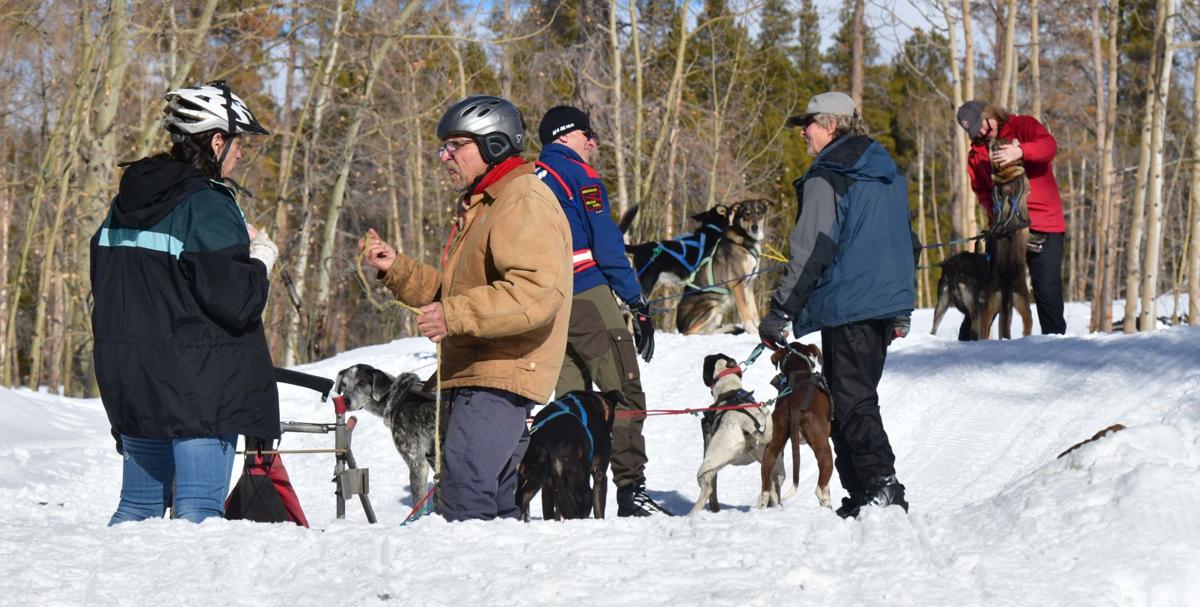 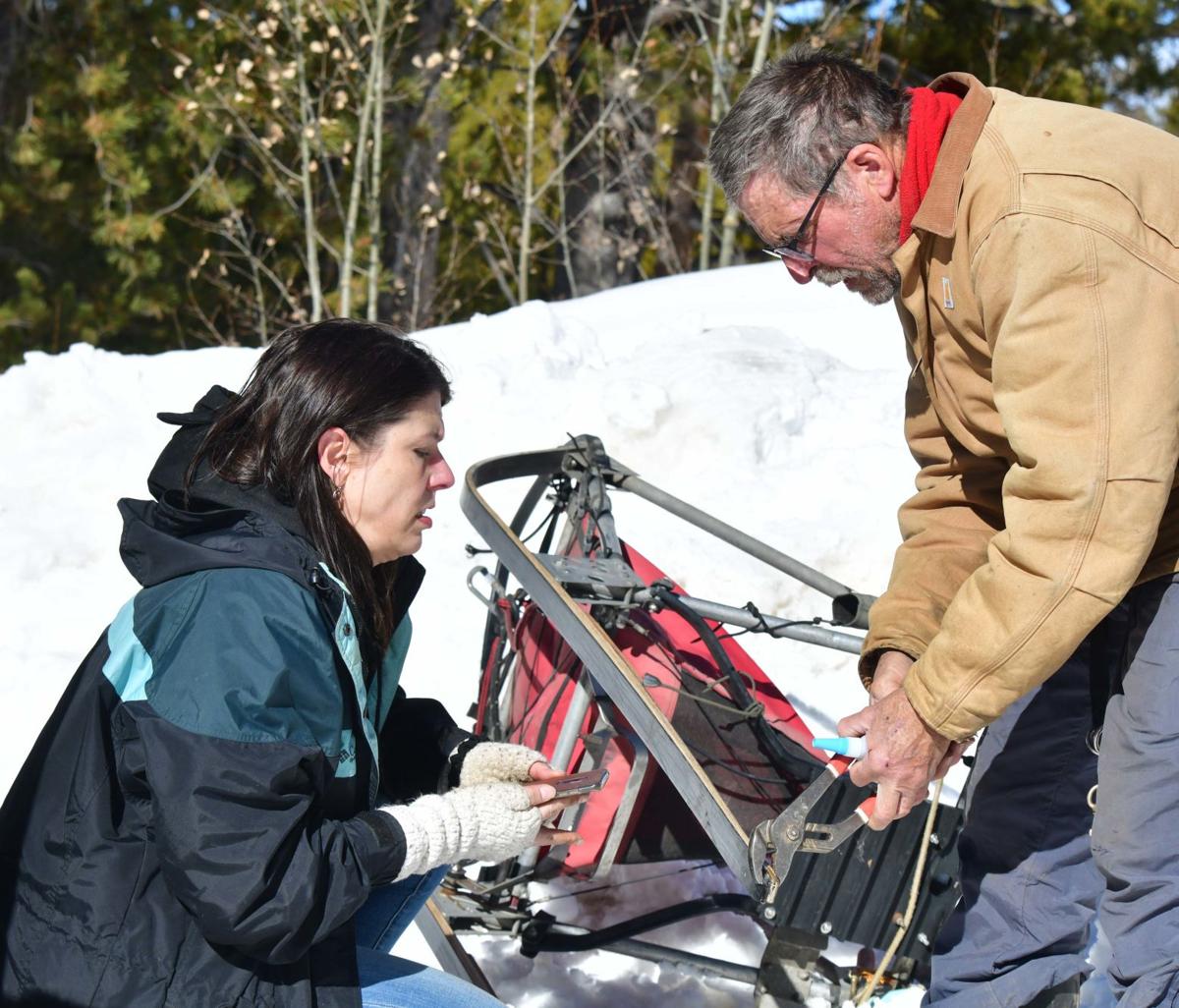 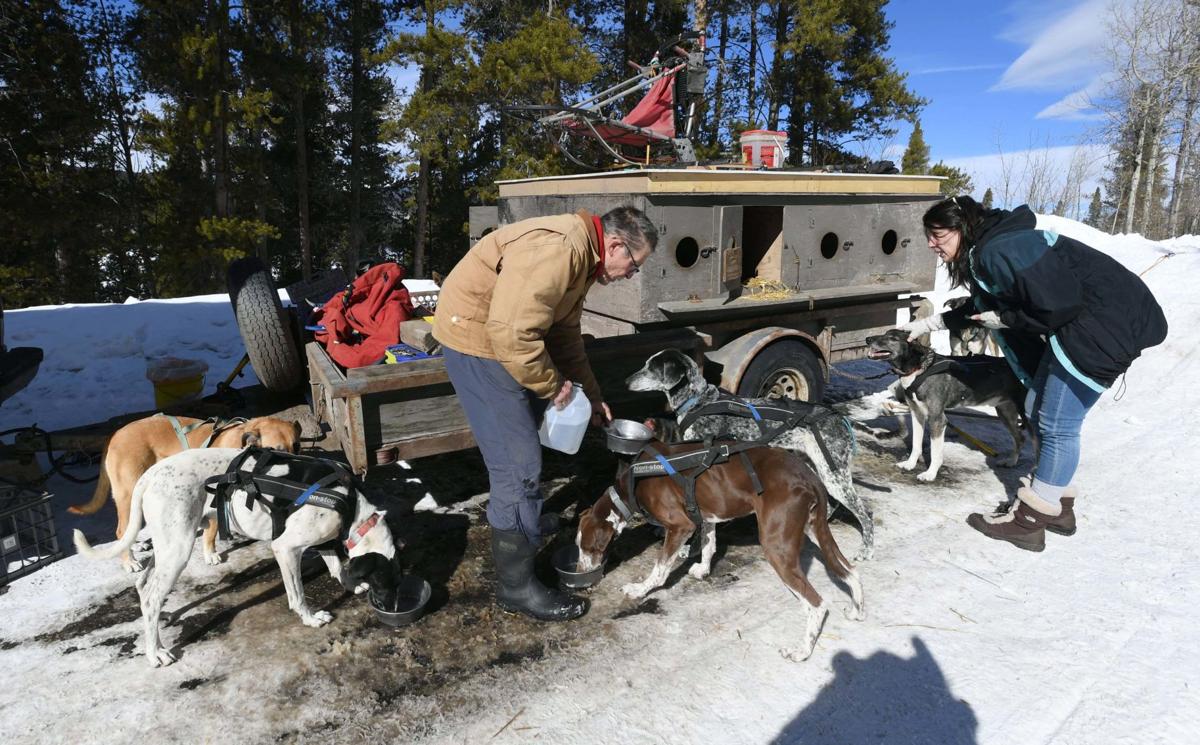 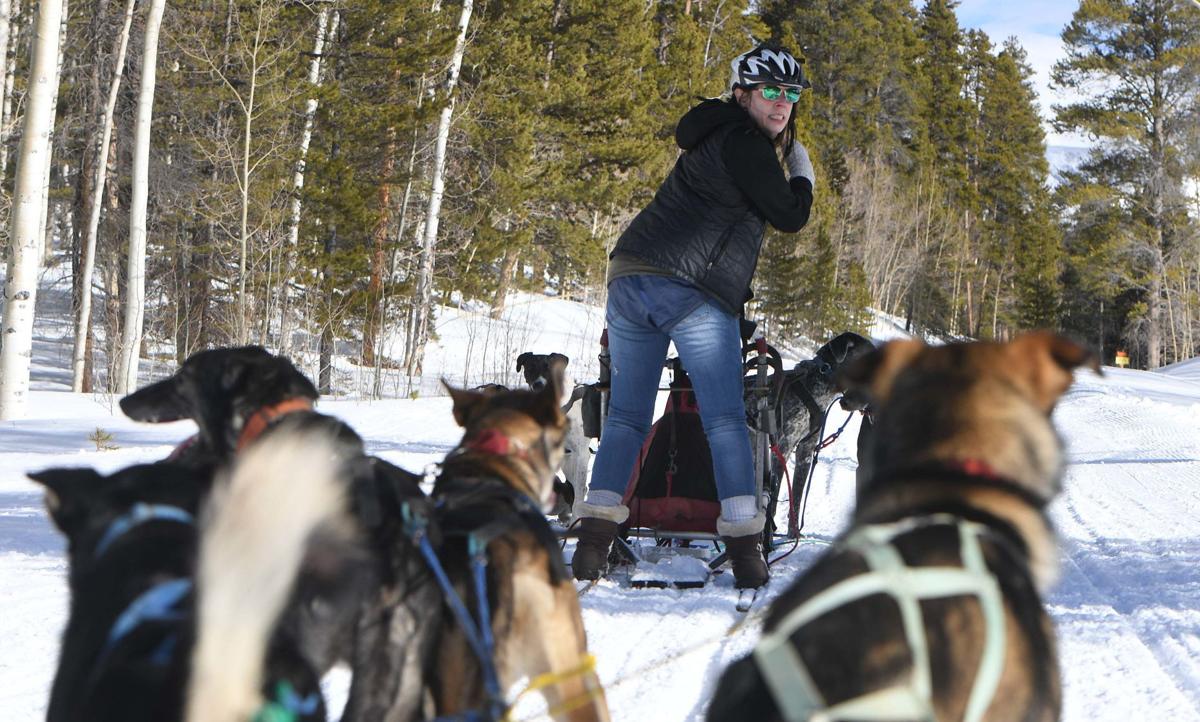 LEADVILLE • There is no “neutral” gear on a dog sled.

If you forget to plant the big hook anchors or stand on the claw brake — and your muscles aren’t crimped in place, ready for launch — you’re liable to end up a musher on her tush in the slush, with a team bird-dogging for wild, white yonder.

It happened to a friend of Michael Sullivan’s in early January, and they spent a panicky four hours in the frigid San Juan backcountry before the dogs were found, about 15 miles from where they’d gone rogue.

When errors happen on a dog sled, they’re often of the human variety.

“My friend who was driving didn’t wear a safety line…,” says Sullivan, as he rummages through gear in the storage compartment of the kennel-on-wheels he uses to transport his 10 sled dogs here from Littleton. “Won’t do that again.”

My “tether” is a 6-foot length of poly rope with locking clips at each end. One is latched to the sled, the other to the climbing-style harness I’m wearing over my jeans and a layer of thermals.

It’s a failsafe I hope I won’t need — and I don’t, for about a half-hour into our adventure down groomed trails around Turquoise Lake on a sunny Sunday in late January.

But I’m an older dog and this is a new trick, so I’m OK with a not-entirely-dignified affair. Really, that’s how it began.

On that note, let me introduce you to the sport the way I met it:

So many puppies! Who to pet first?!?

A slender husky mix with Yoda ears licks my hand and face.

She came from a “frustrated skijorer” who didn’t think she ran well.

And this guy nosing in for some love is Zorro, a good lead dog who’s working to get his priorities straight.

“He’ll pass you, but if he does, all he wants to do is socialize,” says Sullivan. “He is such a social butterfly.”

Over there’s Tipler, a 3-year-old Alaskan husky bred and whelped on a glacier outside Juneau.

“She’s just amazing. She is the fastest-learning sled dog I’ve ever had,” Sullivan says. “Her trademark, she’s got a heart-shaped fur patch on her butt. Fortunately she’s spayed, or that would be some target.”

Another dog, Husky, had refused to cooperate for a local sled-dog tour operation.

“He’d been basically sent to me to see if we could bring the sled dog out in him,” says Sullivan, a veteran recreational and competitive musher who’s been coming up here since 2003 to train with his dogs.

The oldest is Peter, who’s almost 12 and spent two years at a shelter before Sullivan adopted him. The youngest is an adorable 5-month-old standard poodle/husky mix who isn’t due to start Sled Dog 101 for a few more months.

Most of the dogs are Alaskan huskies or husky mixes, and all but the puppy are what Sullivan calls “giveaways” — rescue dogs or those who made their way to him for “rehab.”

Do a job you love, they say you’ll never work a day in your life.

In that case, sled dogs have a pretty good gig.

All that giddy barking, whining and yipping isn’t because they’ve got company.

They want to run.

“They’re bred for it. It’s in their DNA,” Sullivan says.

Before everyone’s harnessed up, I get a quick lesson on operation that basically entails a rundown of the different ways to make a sled stop. These include two big “parking brake” hooks and a foot-operated claw brake that, if I stomp too hard and we’re moving too fast, could potentially pinwheel me over the handlebars. For more gradual stopping power, I’ve got the drag brake, a flap between the runners I can step on to slow things down.

And finally, I’ve got me.

“It’s literally digging in your heels. I love that expression,” Sullivan says.

As for commands, “Hike” means go; “whoa,” obviously, stop. “Gee” and “Haw” mean turn right or left, “On by” means “ignore it, nothing to chase here.

“Always watch the butts, where they’re pointed, what they’re doing. That’s a good rule,” Sullivan says. “Some dogs can poop while they’re running, and some can’t. They’ll bring the sled to a stop.”

With Sullivan and his team running ahead, my team — Zorro and Marion in the lead, Husky and Tipler in wheel dog position — will probably do their thing without much guidance from me. In case things go sideways out on the trail, Sullivan’s friend and champion dog skijorer Scott Aimone is on cross-country skis running backup (and pickup) for our adventure.

It takes about 20 minutes to get the teams assembled and hooked to the gang lines that pull the sled. Sullivan and his four-dog team set off first, and Aimone has me keep the claw brake engaged while they gain some distance.

Then he counts us down:

The dogs each weigh between 50 and 60 pounds, so they’re not huge. Their combined strength and enthusiasm, however, launches us with a force I hadn’t expected. My left foot slips from the runner, and for a few seconds it’s touch and go before I find my balance and shout “Hike-hike.” Like I’ve got anything to do with it.

Now we’re cruising, and the eager chorus of barks, yips and whines goes silent. There’s just the shussssh of the runners, the crunch of paws on snow and the occasional clump flying at my face (good thing I remembered sunglasses).

As Aimone put it earlier:

“When you get out there a little ways, and it’s quiet and all you hear all the dogs running, and you’re going 15 miles an hour ... it’s just a beautiful feeling. It’s a little bit of poetry there.”

And it really is.

The reverie lasts through the next pause-in-mush, when I go for a quick nose blow and hair scrunchie adjustment and forget to set the brakes. Next thing I know, Zorro, Marion, Husky, Tipler and the sled are on the move and I’m on my back, dragging behind, grabbing at snow and yelling “Hey! Stop! Whoaaaaaaaa!!!”

The other comments my voice recorder managed to pick up aren’t suitable for print.

The tether does its job, though, turning my body into an anchor that quickly slows the sled enough for me to set the “parking brakes” and climb back aboard. When I do, Tipler gives me an over-the-shoulder look that, I swear, ended with an exasperated eye roll.

My team is fast, though. We keep catching up with and passing Sullivan, at which point my pups call it quits. “They want to hang out with Dad,” Sullivan says.

Recovery after my next brake-induced topple is a lengthier ordeal, and the dogs get impatient and tangled in the gangline while they wait. Thankfully, Aimone slides up to help unbraid them — and assure me that, despite the looks Tipler’s been giving me, I’m not doing anything wrong.

“Still, I really feel like I’m riding, not driving.”

“You were definitely driving,” he says.“First time you hit the brake, you’re driving.”

Driving. … It’s a much more empowering word than falling.

Our 5-mile loop wraps with a series of wind sprints — dashes of 15 to 20 seconds meant to teach the dogs to run and not trot.

By the time we’re done and the trailhead’s in sight, I’m feeling pretty confident about my sled braking skills.

Tipler, I suspect, would disagree. Or, maybe, she just didn’t want to stop running.

After an introduction to dog sledding, my arm muscles are barking and my legs dog tired, but I kind of don’t want to stop either.

Howling for more on sled dogs?

For more about the sport of sled dog racing in Colorado, check out the Rocky Mountain Sled Dog Club, at rmsdc.org and on Facebook, and the Colorado Mountain Mushers, at colomtnmushers.org.

If you're not one of Parker the Snow Dog's 16,000 followers on Instagram, then you might have missed the big news.