as the sun sets on a warm summer evening at Trinidad Lake State Park just north of the New Mexico-Colorado border. 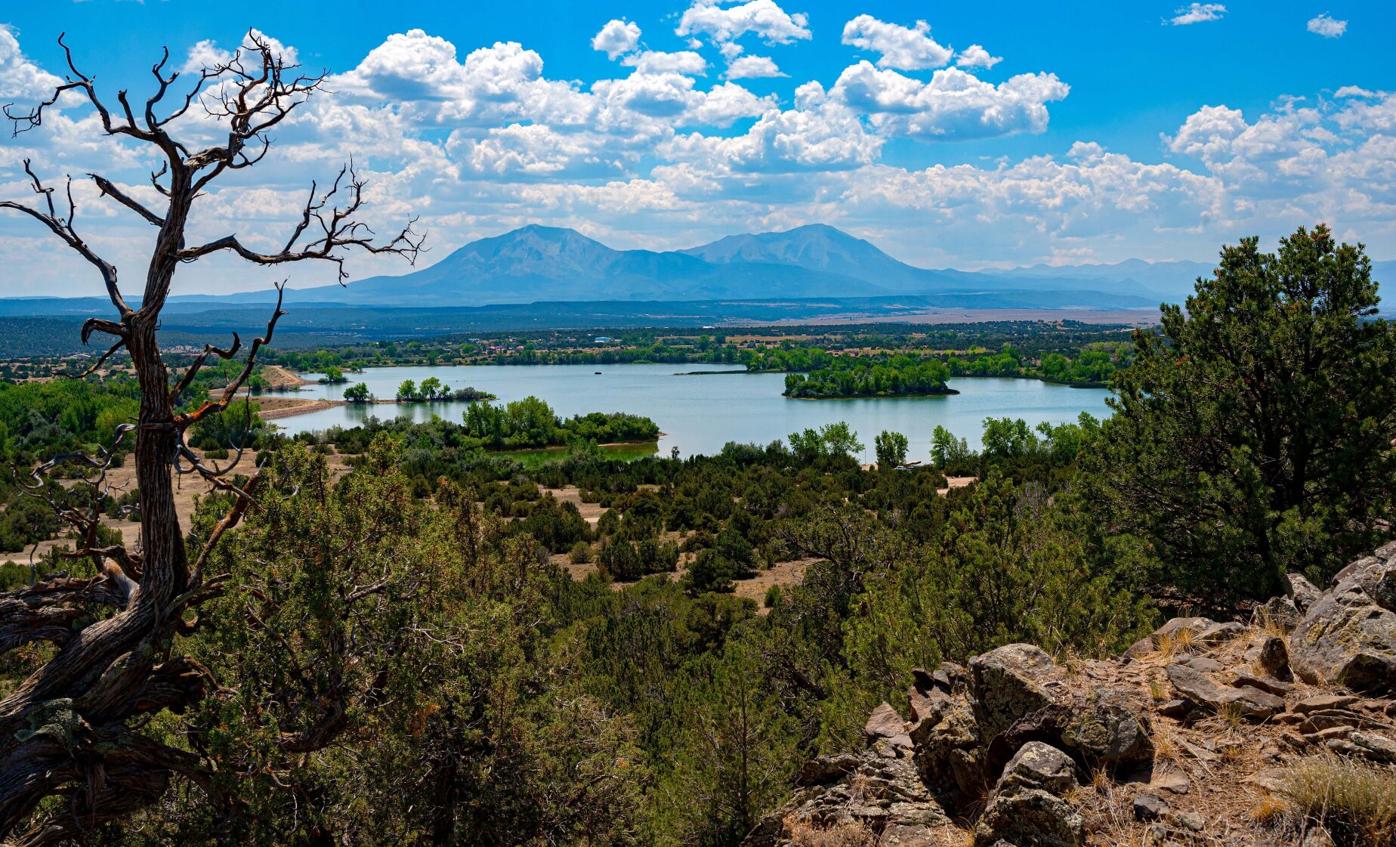 The Spanish Peaks, with Horseshoe Lake in the foreground, can be seen from the top of the William Henry Jackson Trail, a spur from Hogback Trail, in Lathrop State Park Tuesday, Aug. 18, 2020. Nineteenth century photographer William Henry Jackson took his famous 1885 picture of the peaks from this spot. (The Gazette, Christian Murdock) 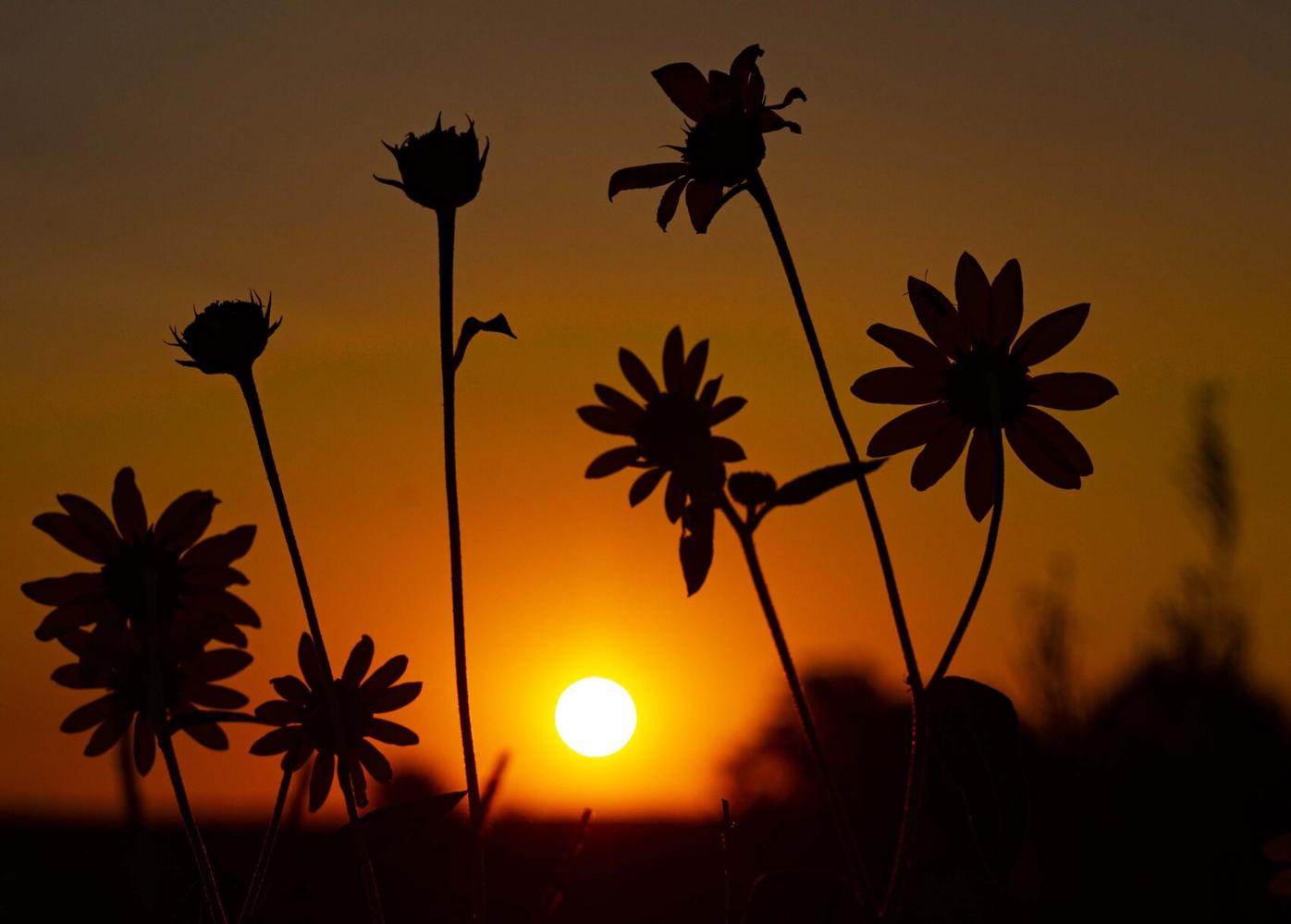 Sunflowers frame the sun as it rises over Trinidad Lake State Park in southern Colorado. 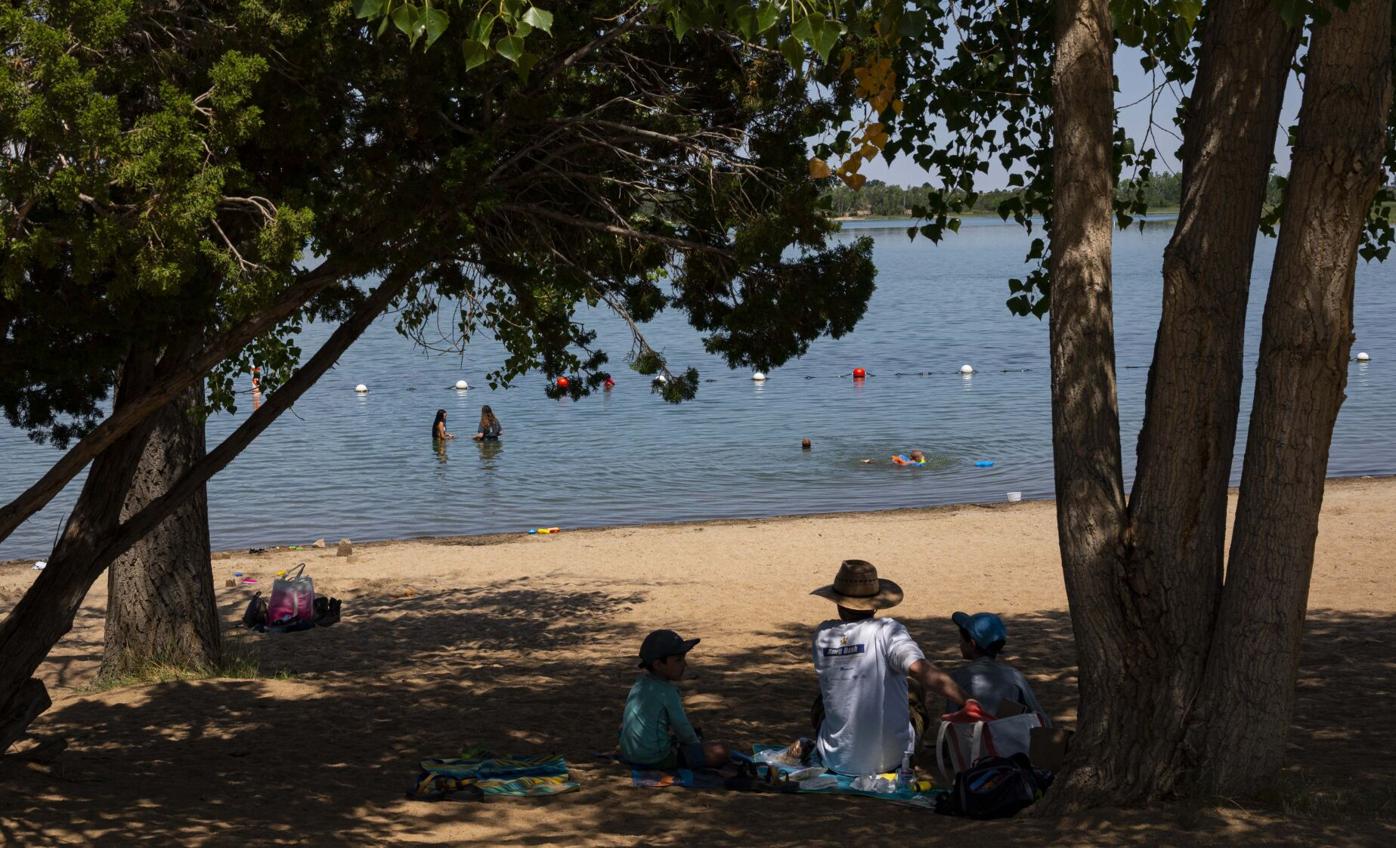 Visitors enjoy the shade and the swimming area at Martin Lake in Lathrop State Park on a hot summer day. 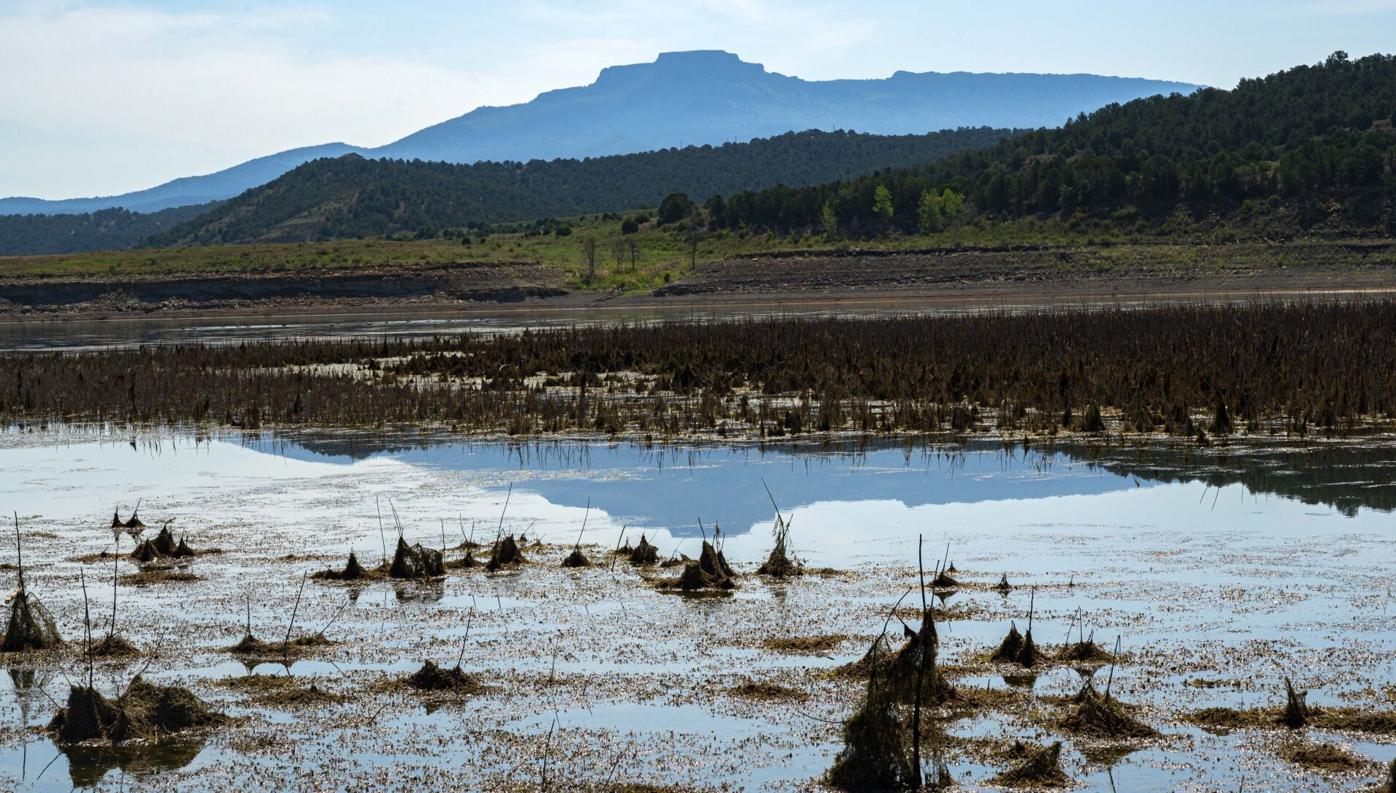 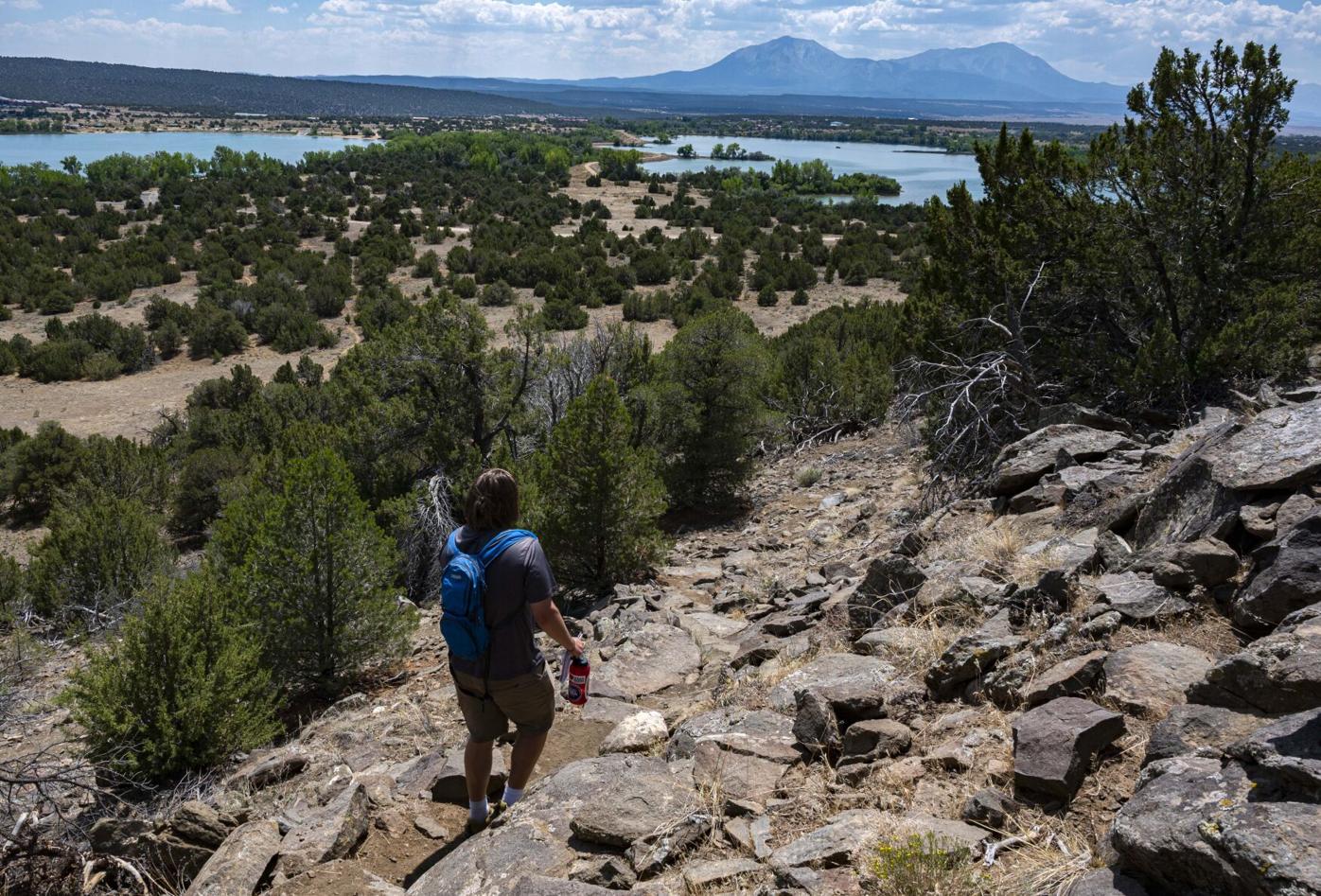 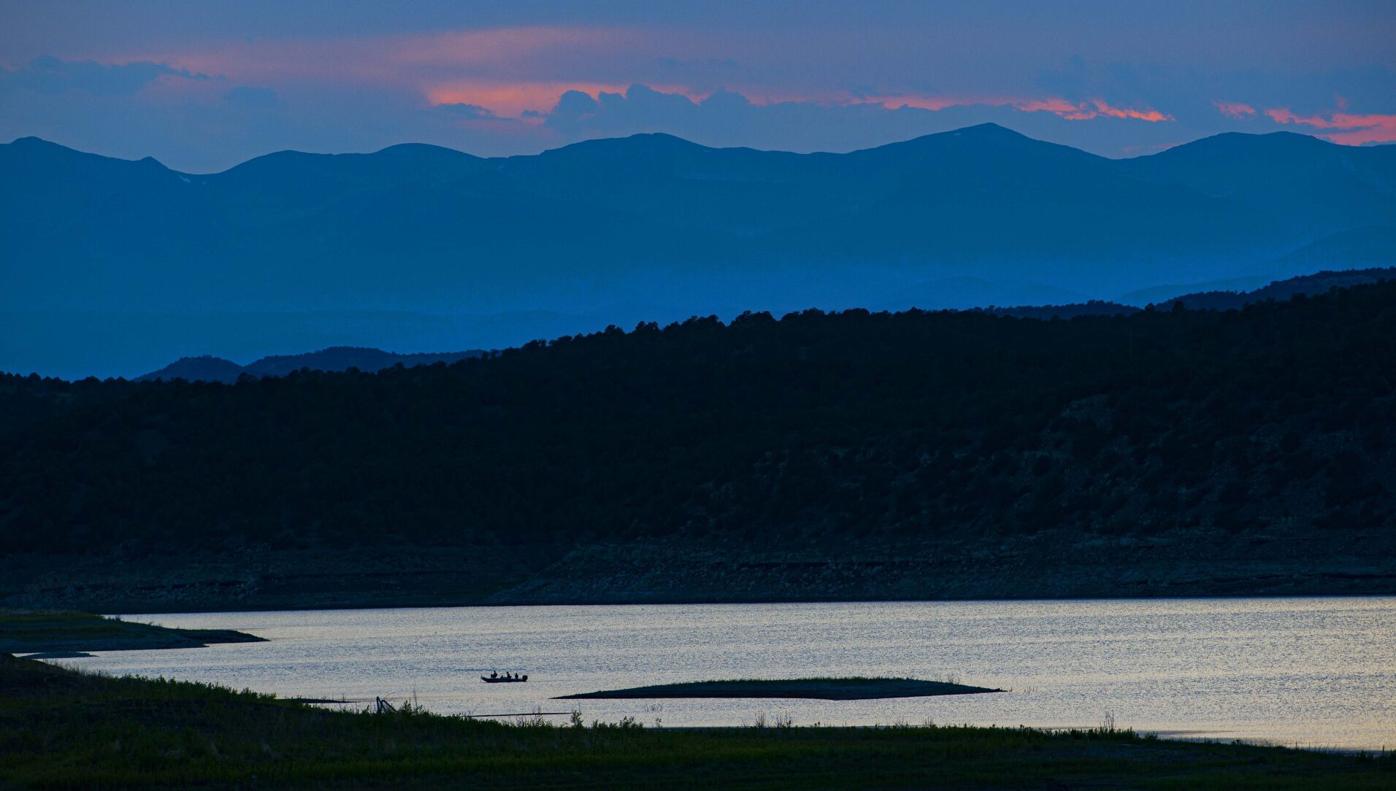 as the sun sets on a warm summer evening at Trinidad Lake State Park just north of the New Mexico-Colorado border.

Sunflowers frame the sun as it rises over Trinidad Lake State Park in southern Colorado.

HUERFANO COUNTY • In 1885, as part of his government-backed mission to photograph the desolate frontier, William Henry Jackson with camera in tow ascended this rocky ridge where there is now a short trail.

Lathrop State Park calls it the Hogback Trail. “Congratulations!” reads a self-guided brochure. “You have just climbed to the top of the hogback ...”

Your reward in one direction is the view of Greenhorn Mountain, the highest summit of southern Colorado’s Wet Mountains. Jackson, who most famously captured the beauty of Yellowstone that previously existed only in imaginations, added to his revelatory portfolio by focusing his lens in the other direction here.

The twin Spanish Peaks rose sharply behind the juniper-spotted prairie and the small bodies of water then called Leven Lakes, later to be developed as reservoirs. Now they are bigger, reflecting that mountain majesty.

Now the picture-perfect sight is for all to discover.

But on this summer day, we are the only ones around.

Lathrop State Park was Colorado’s first state park, set aside in 1962. And today it appears to have been forgotten in favor of other aquatic getaways elsewhere on the Front Range, starting with Lake Pueblo about a half-hour drive north.

Also on this southern end of Interstate 25 is Trinidad Lake State Park, where we camped the night before. By the time the Milky Way glimmered — little artificial light threatens in the bordering, sleepy town — sites were still available here on the south shore. As they were on the opposite shore, where Fishers Peak is seen stretching across the sky.

That iconic mesa will be the apex of Colorado’s 42nd state park. The Fishers Peak acquisition was celebrated last September at a time when Colorado Parks and Wildlife reported increasing demand for another recreation hub; in 2017, state parks altogether counted 15.1 million visits, 3 million more than four years prior.

Comparing visitation this summer at water destinations of southern Colorado

Source: Colorado Parks and Wildlife data, May through July

Lake Pueblo is the busiest of them, annually hosting upward of 2.3 million people. And 2020 is poised to be another record year, as the park has seen a surge in visitation during the coronavirus pandemic — a trend across the Front Range outdoors. Just as Denver oases Chatfield and Cherry Creek state parks have had to turn back boats and cars due to capacity, so has Lake Pueblo.

In response to this summer’s crowding, a CPW spokesman told The Gazette: “We recommend driving a few miles farther to Lathrop State Park or Trinidad Lake State Park. Both are hidden gems.”

According to an agency spreadsheet, Trinidad Lake’s visitation was less than a tenth of Lake Pueblo’s from May through July. Over that time, Lake Pueblo numbers have been 25 times more than Lathrop’s.

“Hidden gems” can be tough to find in Colorado’s ever-bustling outdoors. It can be even tougher to beat the heat. Here’s a snapshot of these two solid bets:

Three campgrounds with a total 103 sites available for reservation. Lathrop is Colorado’s only state park with golfing. The modest, nine-hole course is run by the city of Walsenburg.

Drive from Colorado Springs: ~2 hours. I-25 through Trinidad, exit 11 and follow to park.

On water: Plenty of room for motorized and nonmotorized boats on the reservoir that averages 800 surface acres. Trout, smallmouth bass, saugeye, catfish and walleye up for grabs.

On land: About 9 miles of trails, including the 4-mile (one way) Reilly Canyon Trail, which ruggedly ascends Carpios Ridge and drops to a road near a row of historic coking ovens, relics from the area’s coal mining days.

South Shore Trail is another highlight, stretching about 2½ miles to Long’s Canyon’s riparian corridor known for wildlife viewing. It’s also known for a thin, claystone layer that scientists have marked within the K-T Boundary, representing the age between dinosaurs and mammals.

South Shore and Carpios Ridge campgrounds total 73 sites available for reservation. Ten of those at South Shore, nonelectric but RV-friendly.

Tip from park manager Crystal Dreiling: ”While swimming and swim toys are not permitted, we’re seeing an increasing number of people using stand-up paddle boards, kayaks and canoes. This lake is a great spot for this type of activity due to our relatively low number of boats, the majestic views from the lake and the sprawling shape of the lake.”

Colorado's next state park has a name, with public access coming soon

Colorado's next state park officially has a name.