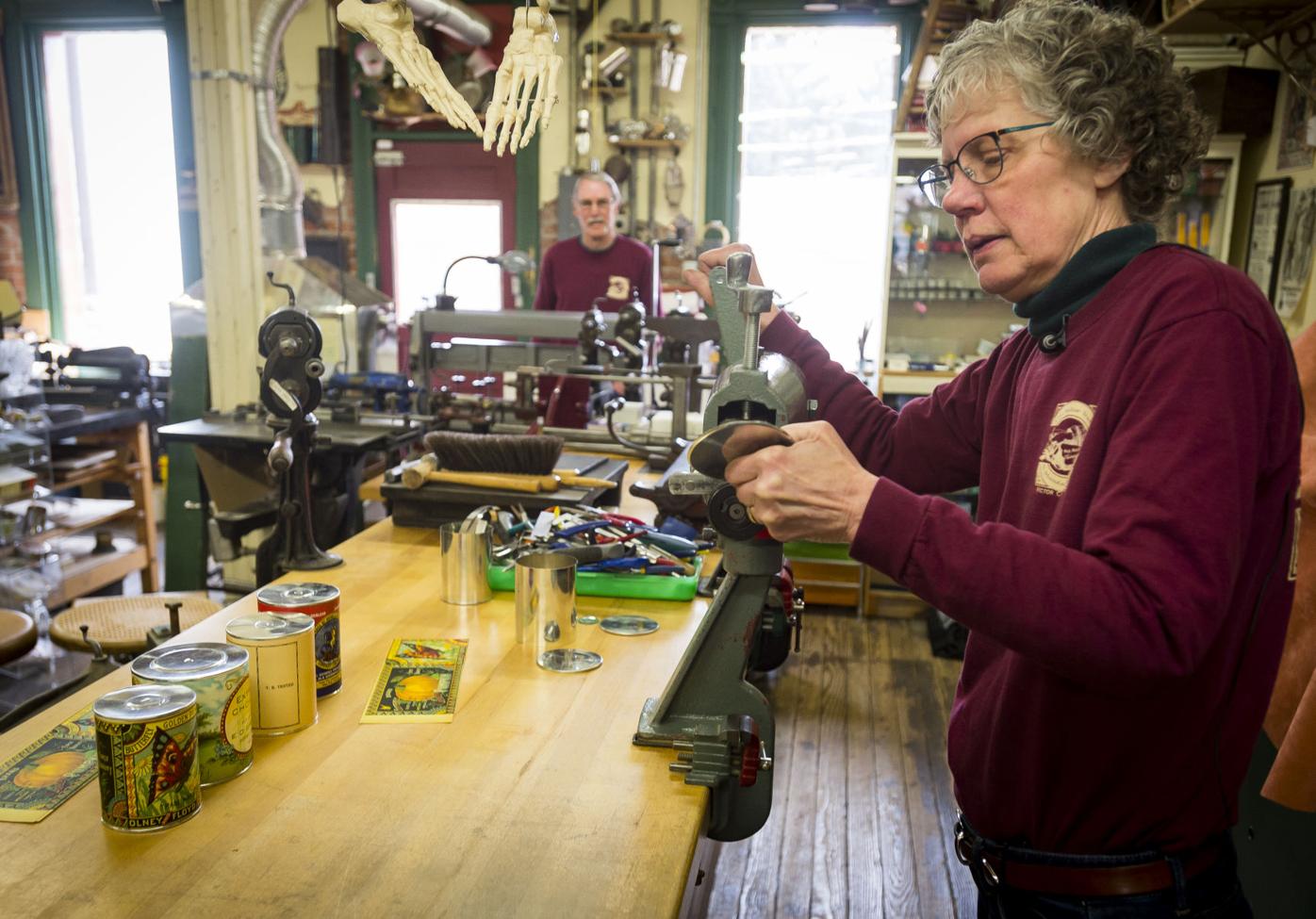 Karen Morrison, co-owner of Victor Trading Co & Manufacturing Works makes the lid to one of the cans on Thursday April 13, 2018 in Victor. 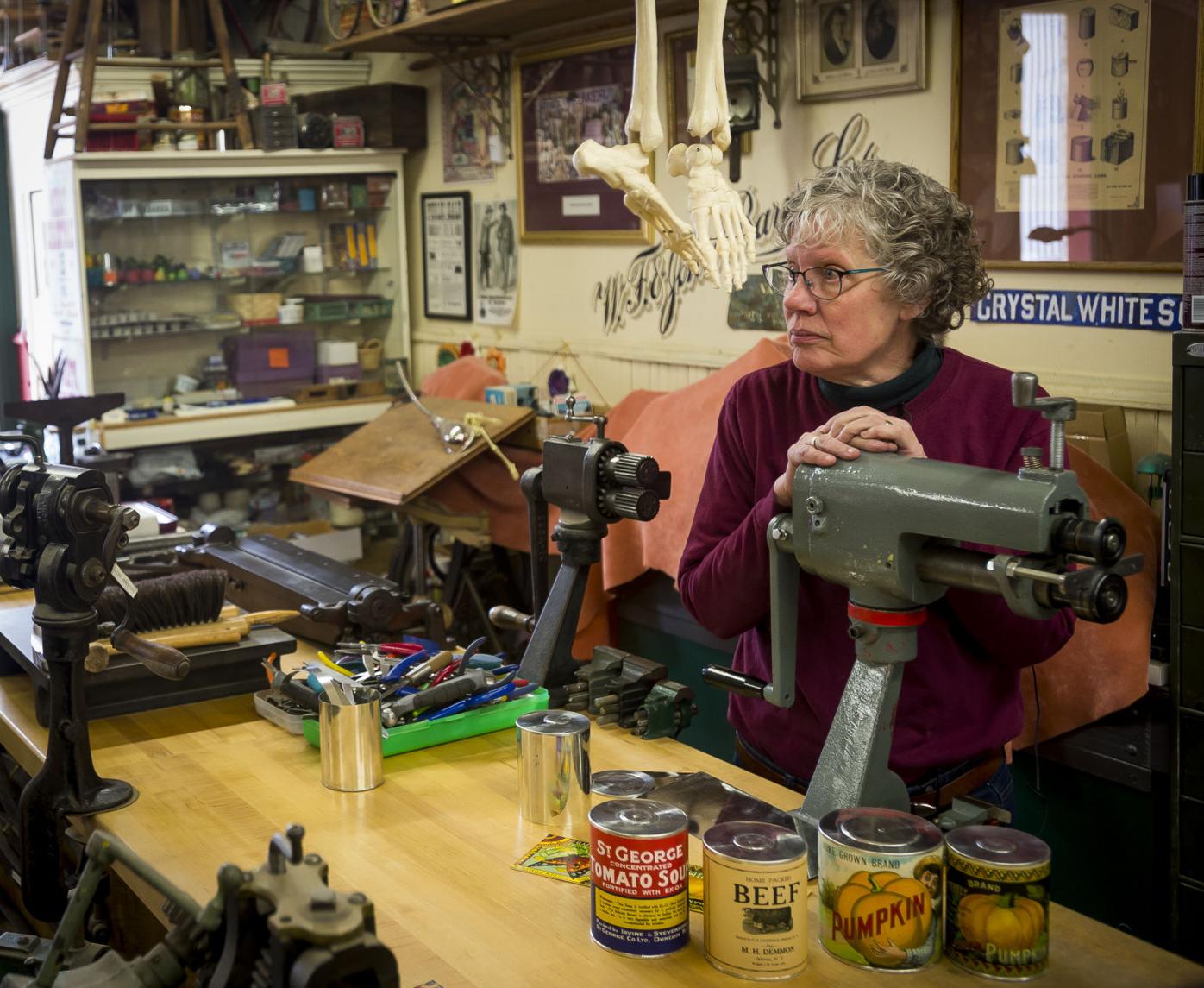 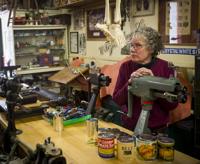 Karen Morrison, co-owner of Victor Trading Co & Manufacturing Works stands by some of her cans she had laid out on Thursday April 13, 2018 in Victor. 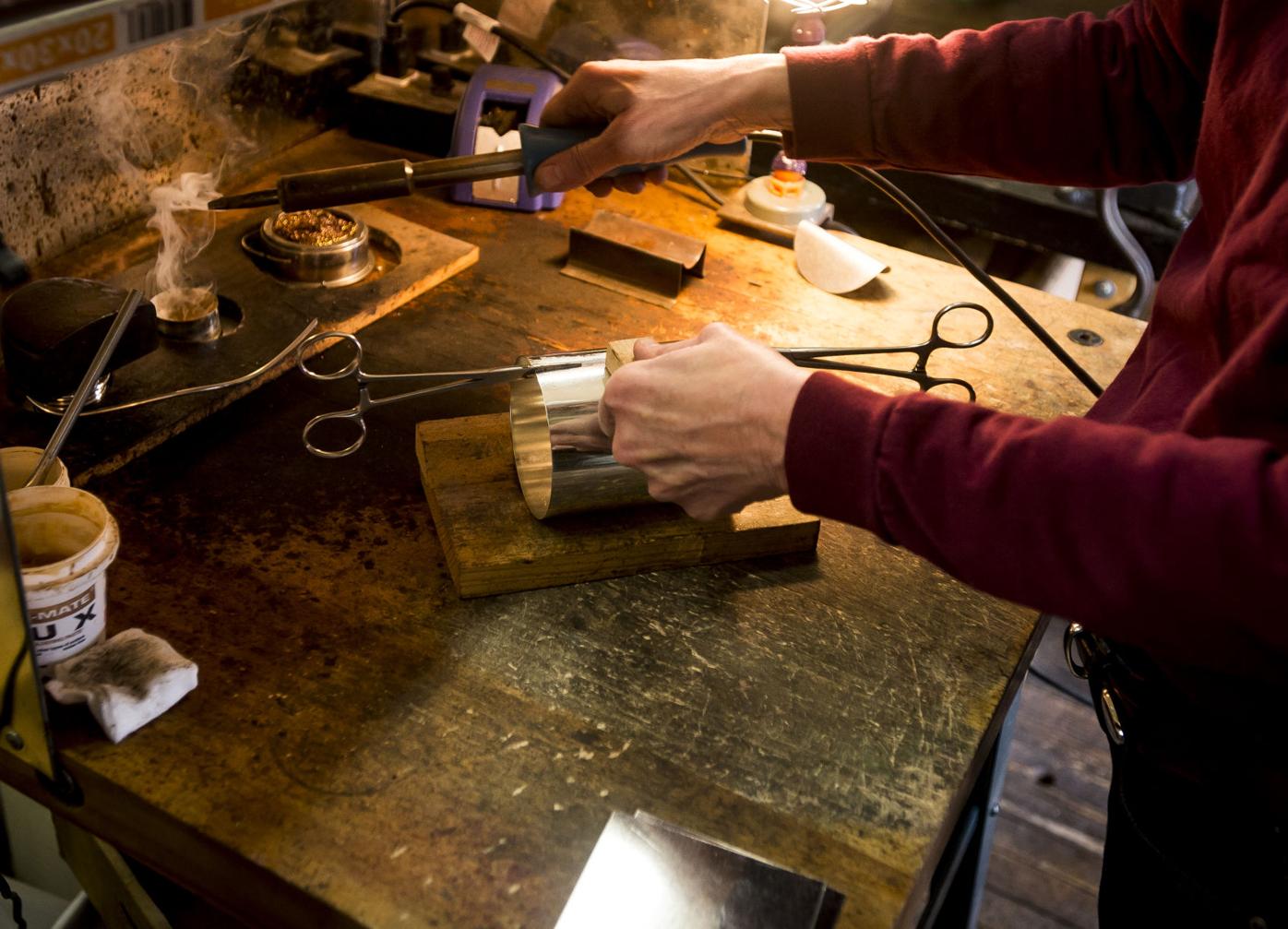 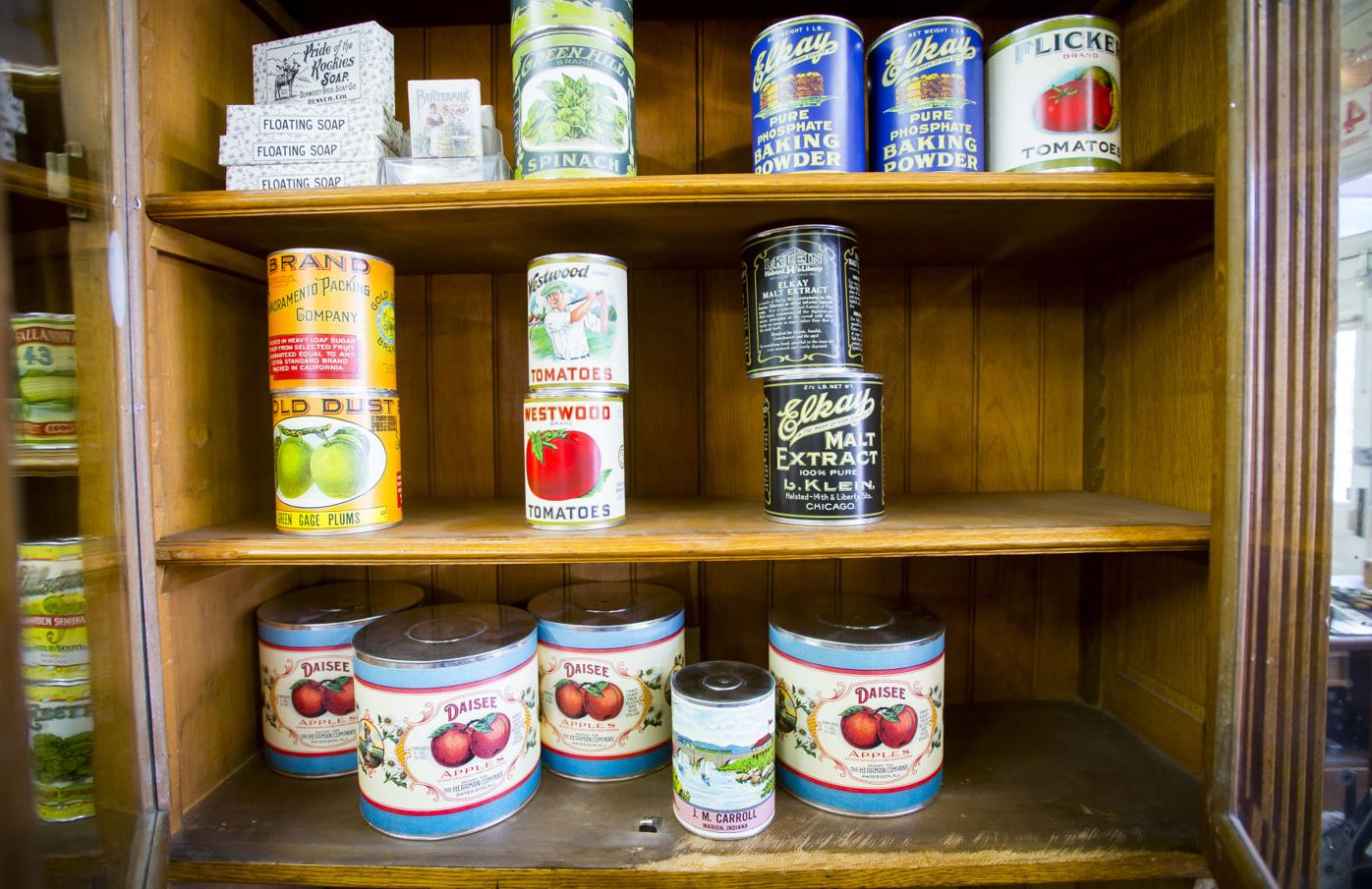 Some of the many cans that are done by time period created by Karen Morrison, co-owner of Victor Trading Co & Manufacturing Works on Thursday April 13, 2018 in Victor. 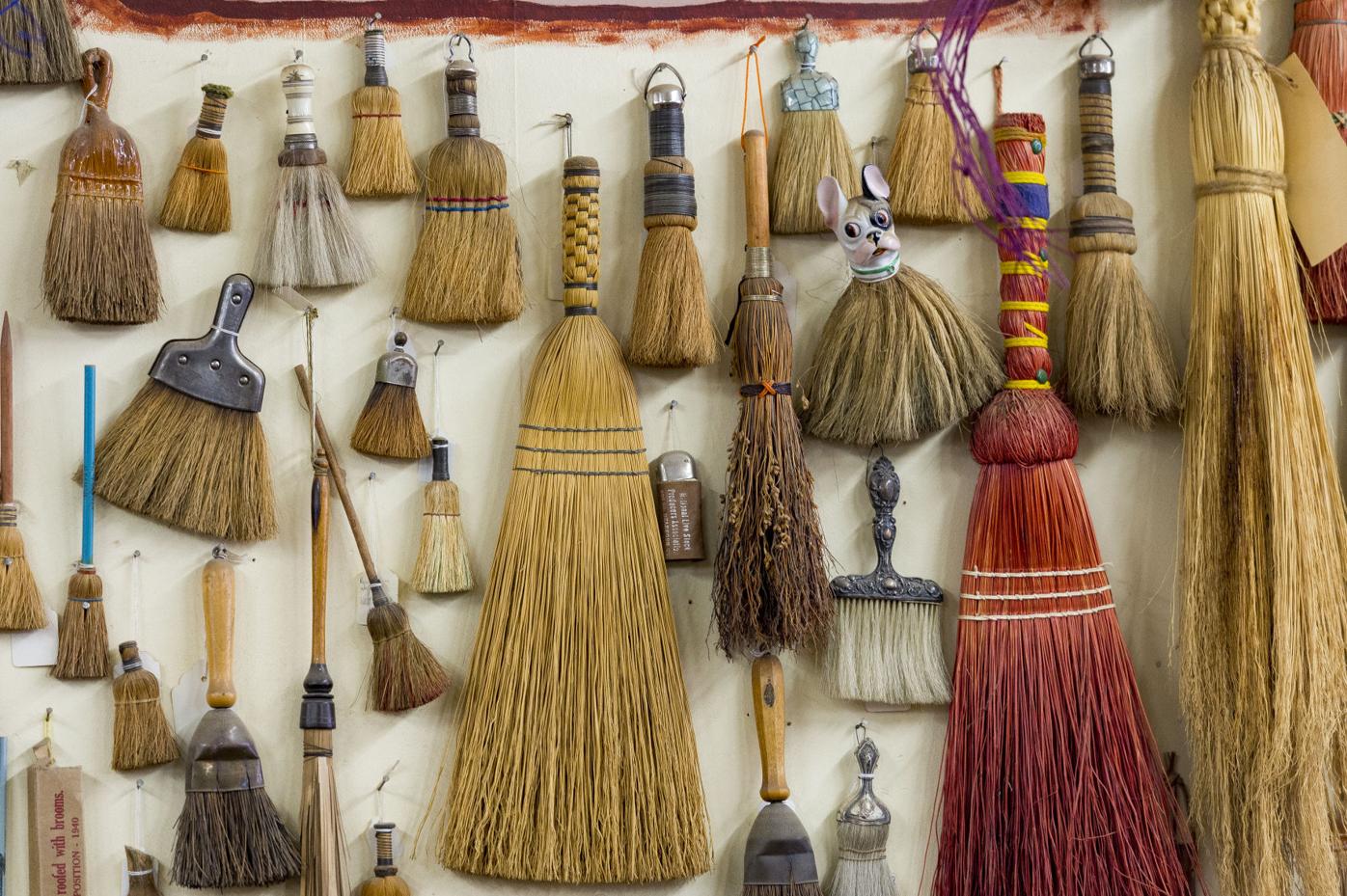 Karen and Sam Morrison, owners of Victor Trading Co & Manufacturing Works started their company with their broom business on Thursday April 13, 2018 in Victor.

Karen Morrison, co-owner of Victor Trading Co & Manufacturing Works makes the lid to one of the cans on Thursday April 13, 2018 in Victor.

Karen Morrison, co-owner of Victor Trading Co & Manufacturing Works stands by some of her cans she had laid out on Thursday April 13, 2018 in Victor.

Some of the many cans that are done by time period created by Karen Morrison, co-owner of Victor Trading Co & Manufacturing Works on Thursday April 13, 2018 in Victor.

Karen and Sam Morrison, owners of Victor Trading Co & Manufacturing Works started their company with their broom business on Thursday April 13, 2018 in Victor.

VICTOR - Karen and Sam Morrison are known for their brooms.

"But we're more than that," Karen says inside Victor Trading Co., the soft-spoken couple's shop and home in the mountain town that doesn't seem far removed from the gold rush.

The difference, of course, is that all the people are gone. The wind blows the tumbleweeds by busted mining shafts while businesses on the Victorian main street try to avoid the boarded-up fate of their neighbors.

The Morrisons have made a name for themselves, though, by keeping traditions alive. Take the brooms, for example. For 30 years they've been crafted by hand near the front counter, giving the Morrisons their unlikely reputation in an unlikely place.

But few know what happens in the back of Victor Trading Co. There, Karen cranks and pulls the levers of antique machinery to make 19th-century cans that are a commodity among old-time re-enactors, nostalgic homeowners and ...

"They find us, and we're small," Karen says, understated as ever. "I think it's exciting."

A couple of summers ago, she got a call requesting cans for the second season of AMC's "The Son," featuring Pierce Brosnan and taking place in the old West. Proper props were needed for a target practice scene, Karen was told.

"I didn't tell the cans they were gonna be shot," she says, regretfully.

Most recently was a call from Maine, where "The Lighthouse" was being filmed.

OK, Karen told the man on the other end.

It's by the same people who did "The Witch," the man explained.

"The Lighthouse" needed dozens of cans from the 1880s, and they needed to be shipped tomorrow. The man agreed to take some from the 1890s that Karen had in stock, and off she zipped to Colorado Springs, to FedEx the bulk in another harried job for the movies.

"They usually need 'em right away, even though they've planned this movie for, what, how many years?" Karen says. "The cans are something they need right now."

Karen starts with a sheet of tin that she rolls through rusted pins, turning the sheet into the cylinder. She takes tin squares to another machine that cuts the edges, making the circles that form the top and base. The tricky part is burring the edges, applying just the right pressure just long enough to make the circles just right to fit the cylinder. Then Karen solders those on.

On the top's hole - made for filling beans and corn and whatnot - she solders on a cap, replicating the cans she and Sam still find across Victor's hills, left by the miners.

The last step is gluing on the product label, which gives the can its time distinction. The Morrisons have collected about 145 labels, and they've color-copied them for mass use, because they wouldn't dare waste the originals.

"We look at these every day," Karen says, admiring the colorful artistry of one. "You know, at homes (today), they're shut in cupboards. You can't see 'em, and that's OK, because they're ugly."

That authentic process is appreciated by a select few. Tourists walk in to Victor Trading Co. and easily miss the words on the shop's wall: "When was the last time you actually bought something from the person who made it?"

Among Karen's handmade creations, including cookie cutters, candles and glass dishes, nothing gets the demand like the cans, and that's because of the movies.

They were born - or reborn - after a Civil War re-enactor asked Karen if she could reproduce the hole-and-cap relic. She was excited to try. After all, the Morrisons live by other words on the wall: "The life so short, the craft so long to learn."

She presumes the word got around Hollywood sometime after "The Missing." Ron Howard's 2003 Western starring Tommy Lee Jones and Cate Blanchett was the first to order the cans.

The star power didn't occur to Karen, but "it was like, really? This is for real?" she recalls. "You're gonna pay for these?"

Not long after, someone else called needing cans for the Steven Spielberg-produced miniseries "Into the West."

Karen sifts her memory for other requests. "Oh, yeah, Disney was in there," she says. Attractions in Hong Kong and California were to put her cans on display, though she's never seen them in pictures or bothered to travel.

Nor has she seen her cans on screen. "They've never made the cut, I guess," she says.

But the cans, like the brooms and everything else inside Victor Trading Co., were never meant for fame. The Morrisons are simply practicing their hobby.

"This is our life, this is just what we do, who we are," says Sam, who uses his foot to operate a printing press, not for business but for fun.

So no, she hasn't bothered watching "The Greatest Showman," last year's blockbuster musical. If the cans made the cut, they weren't so obviously apparent.

But maybe they were somewhere in the background, blurry and forgettable, back in their natural, hidden place.

“The LAST Great Place.” So reads the town’s welcome sign in this inconspicuous place between towering granite walls, somewhere between the better-known San Juan Mountains to the west and San Luis Valley to the east.