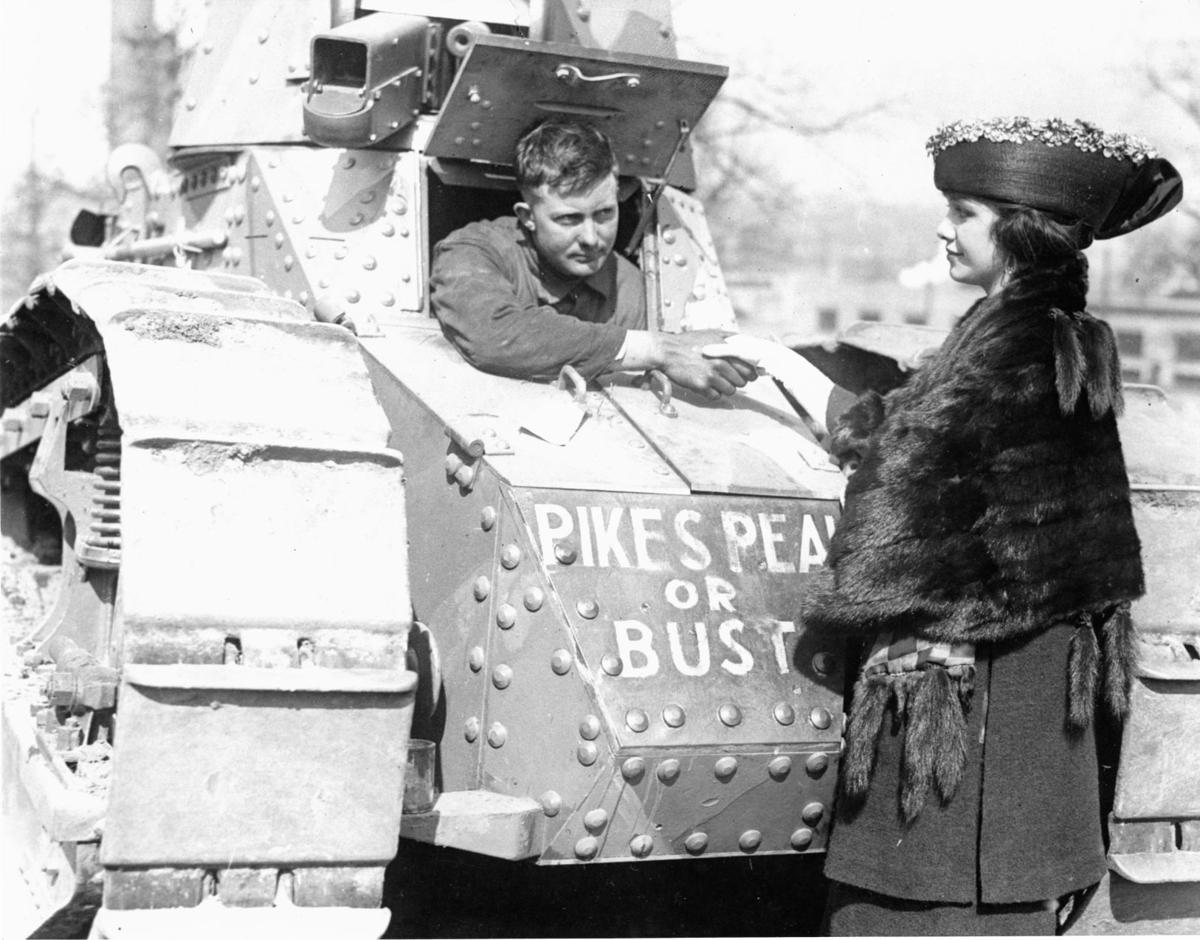 Man in tank shakes hands with Miss Virginia Moncravie, wearing a fur stole and large hat. “Pikes Peak or Bust” is written on the tank. 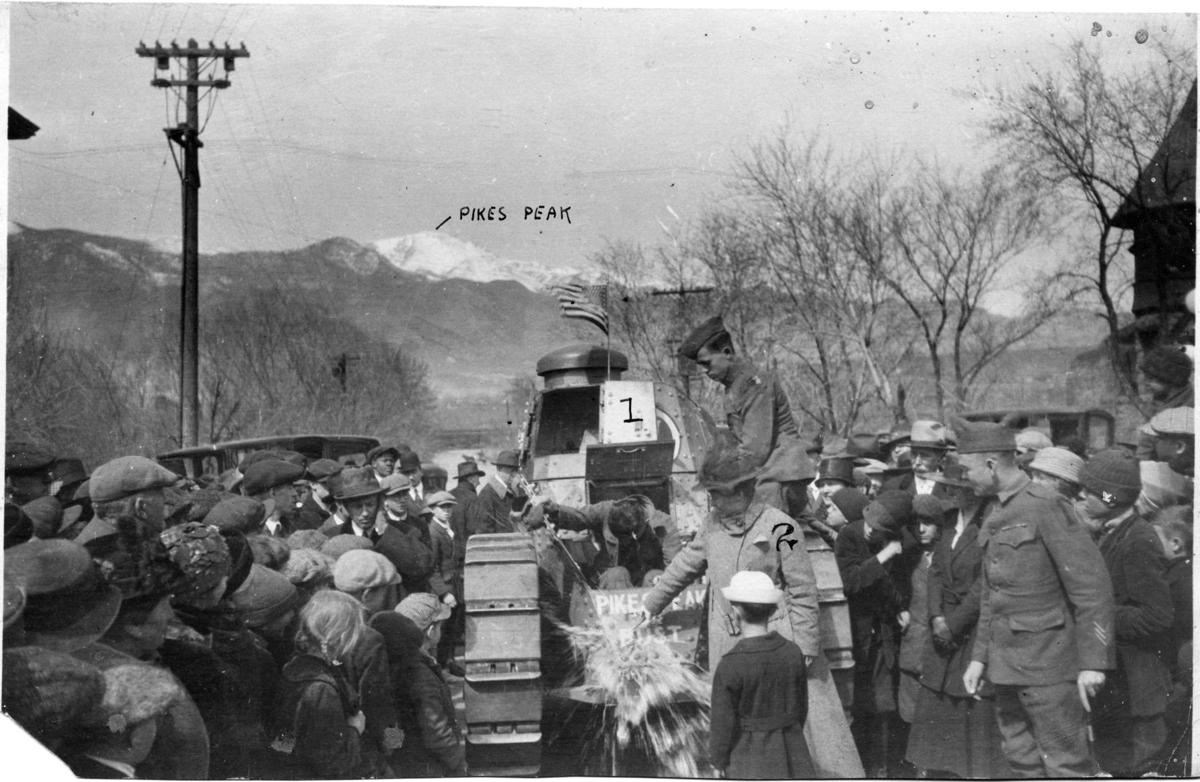 A woman, identified on photo’s back as Mrs. W. H. R. Stote, breaks a bottle over a tank emblazoned with “Pikes Peak or Bust” and surrounded by a large crowd. Tank, Mrs. Stote and Pikes Peak are labeled on the photo with a note on back reading: “#2 — Mrs. W. H. R. Stote christening the tank ‘Little Zeb’ April 14, 1919. Manitou water was used for the christening.” 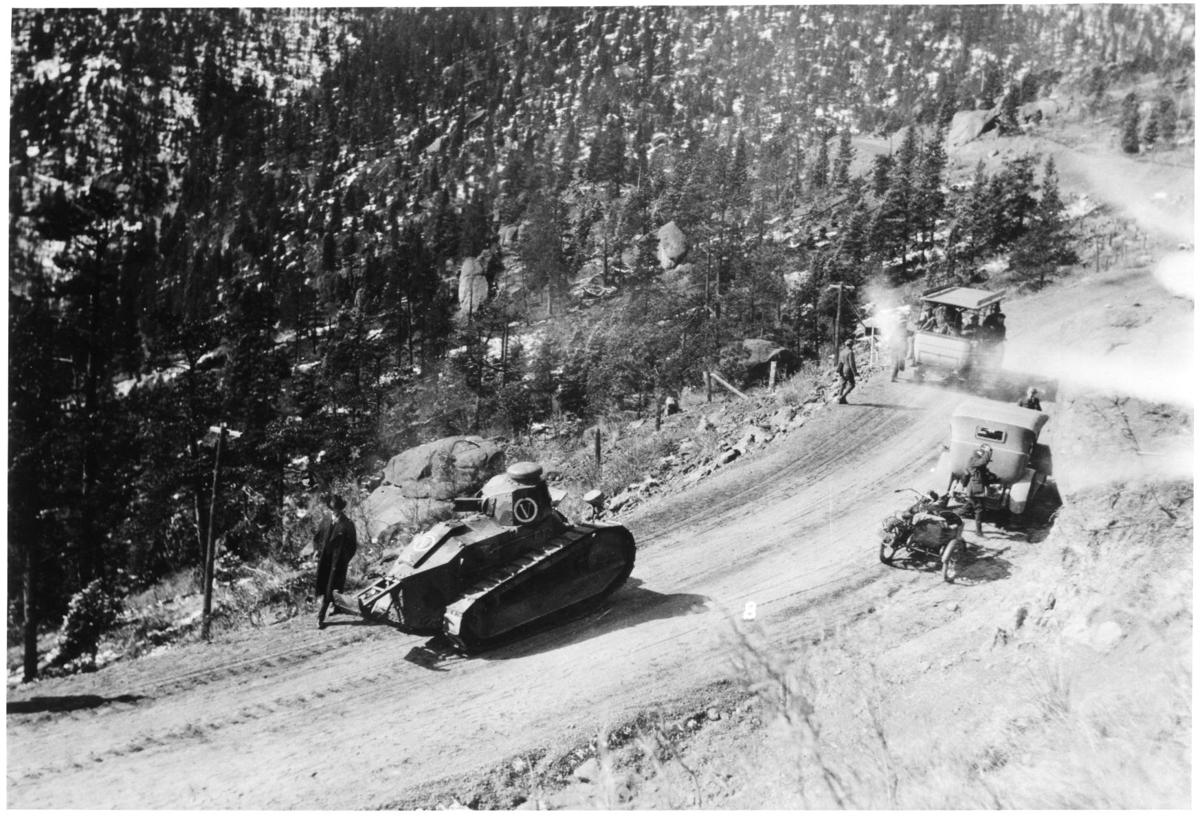 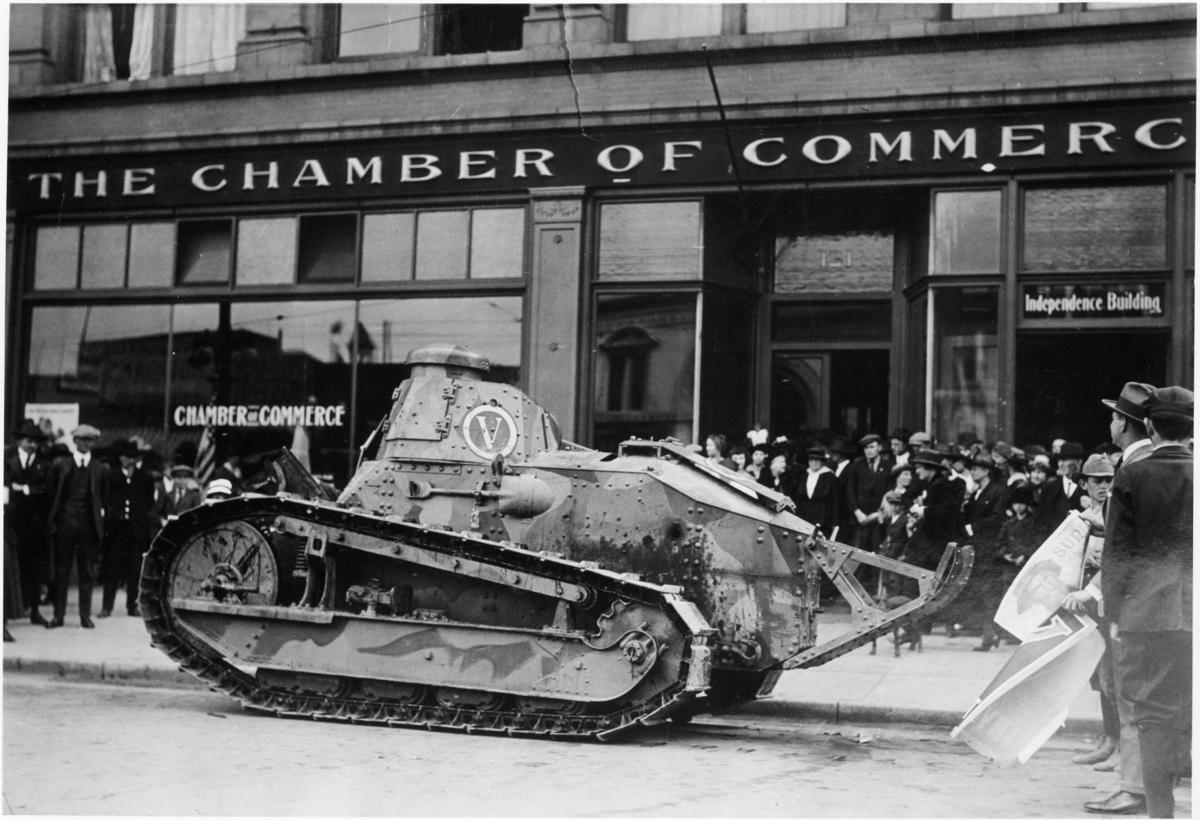 Tank with “V” on side parked in front of Chamber of Commerce Building and surrounded by large crowd. Building has number “121” over door and “Independence Building” painted on window at right. Photo courtesy Pikes Peak Library District Special Collections 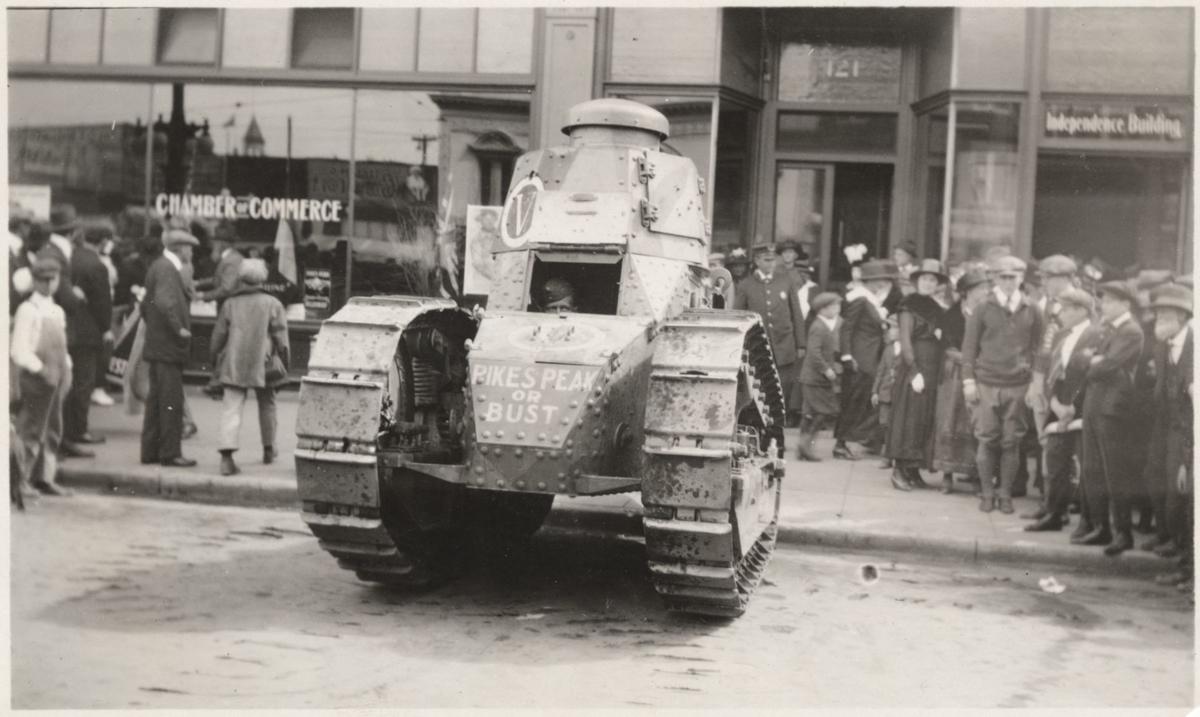 Tank with “V” on side and “Pikes Peak or Bust” on front parked in front of Chamber of Commerce Building is surrounded by a large crowd. Building has number “121” over door and “Independence Building” painted on window at right.

Man in tank shakes hands with Miss Virginia Moncravie, wearing a fur stole and large hat. “Pikes Peak or Bust” is written on the tank.

Tank with “V” on side and “Pikes Peak or Bust” on front parked in front of Chamber of Commerce Building is surrounded by a large crowd. Building has number “121” over door and “Independence Building” painted on window at right.

“I know we can climb it. Given time, the tank could go to the top of the world.”

Cpl. Howard Brewer wasn’t simply being macho. After a reconnaissance ride April 11, 1919, Brewer was sure his 14-ton Whippet tank could climb to the 14,115-foot summit of Pikes Peak. Another member of the team, Sgt. A.H. Worrell, told The Gazette that he had “driven tanks over trees and trenches on the western front and I am betting we get to the top.”

The mountain-climbing mission came at the nexus of money and morale — the U.S. Treasury Secretary was to announce a final “Victory Liberty” loan drive, starting April 21, to get Americans to buy $4.5 billion of government bonds to close out the country’s final bills from World War I.

The Navy immediately announced a supporting campaign. A “Victory Ship” would depart from San Francisco, bound for New York, and would travel each day at the reported rate Americans bought the bond.

The Navy’s incentive scheme was speed. The Army’s was height. It would send a tank to the top of America’s Mountain.

It’s not hard to see why. The road wasn’t paved and had been finished for only three years. The weather was rough. A nearby weather station recorded 4 feet of snow at 10,000 feet.

Plus, tanks featured new technology (and new drivers) in those days. Brewer had only been driving tanks for six months and yet would handle the British-made Whippet, slightly larger than today’s 15-passenger vans, with a top speed of 8 mph.

On April 14, 1919, a crowd of nearly 1,000 watched the chairwoman of the city’s Victory Liberty loan committee, W.H.R. Stote, bash a bottle of local artesian Manitou Mineral Water on the tank and she said: “I christen thee ‘Little Zeb’” (after Lt. Zebulon Pike). “I charge you with making the trip to the summit. As the Victory Loan shall not fail, you must make it to the top!”

The tank started strong April 15, leading a 20-car entourage two hours ahead of schedule for most of the day. At the seven-mile mark (9,500 feet) of the 20-mile road, “100 people stood by to watch the battle” between the tank and a 10-foot snowdrift. The tank won.

There was so much snow that the cars had to stop at mile 11.

Repairs were difficult. Workers had to clear the snowpack under the tank to get to the engine. The cars carrying spare parts and oil were two miles away, and the temperature was often below freezing. They set up a tent to protect their lead mechanic and his helpers from the weather, and they worked through April 16.

“We go ahead,” the overall mission director declared, and Brewer told the press he wanted to make it “even if it means abandonment” of the rest of the stops on the loan drive’s schedule.

Once the repairs were complete, Brewer and Worrell climbed back into the tank and started again for the top, and progress came easy.

Unfortunately, around midday, the team received orders from the Victory Liberty loan state chairman to “discontinue the ascent of Pikes Peak” so the tank tour could continue in other Colorado towns and cities.

The crew turned around and arrived in Manitou Springs at 7:15 p.m., in time to park the tank for dinner at the Cliff House. Brewer had to stay at the hotel for the night with a “light attack of pneumonia,” while Worrell drove to a garage in Colorado Springs after dinner to store the tank prior to loading it on a train for its next stops in Buena Vista, Leadville and Denver, among others.

Though the tank didn’t reach the summit, the assault on America’s Mountain was a successful failure. Economist Richard Sutch notes that 20 million Americans bought bonds, which paid for more than two-thirds of the total war bill. The rest of the war was financed through taxes, an impressive accomplishment of fiscal discipline and patriotic support.

More than a stunt, Little Zeb’s mountain trek tested technology by breaking the elevation record for tanks (astoundingly, climbing higher than most airplanes of the day). It also set the record for continuous tank operation, and Little Zeb ascended higher than any other motorized vehicle at that time of year.

Fifty years before we put an American on the moon, we put a tank on America’s Mountain — a confident step forward for the country and a part of the interesting and impressive military history of the Pikes Peak region.

Colorful and controversial, "Bathhouse" John Coughlin was a summer resident of Colorado Springs and the proprietor of Zoo Park - perhaps the city's greatest attraction from 1906-15.