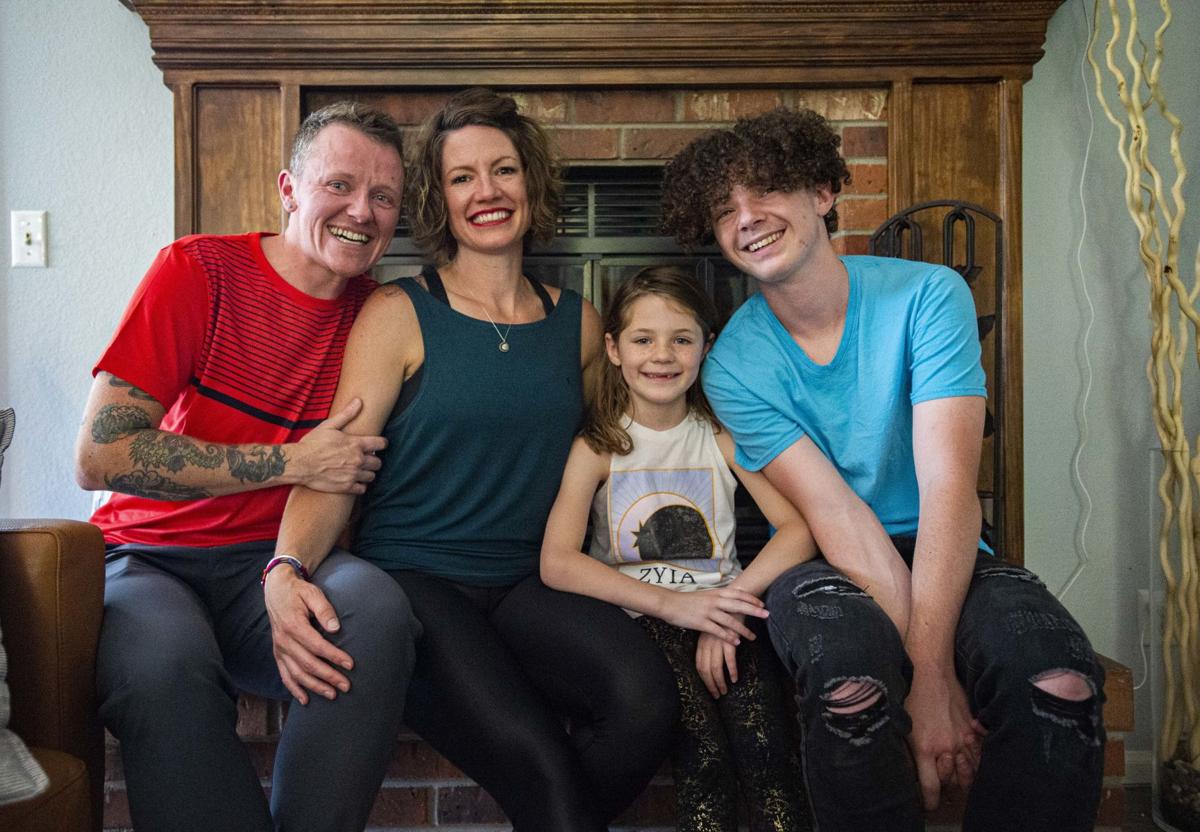 Silas Musick, left, his wife, Erika Highstead-Musick, daughter Wren Musick, 6, and stepson Jack Highstead, 16, pose for a recent picture at their Parker home. The family moved to the Denver suburbs last year from Colorado Springs to be closer to work. 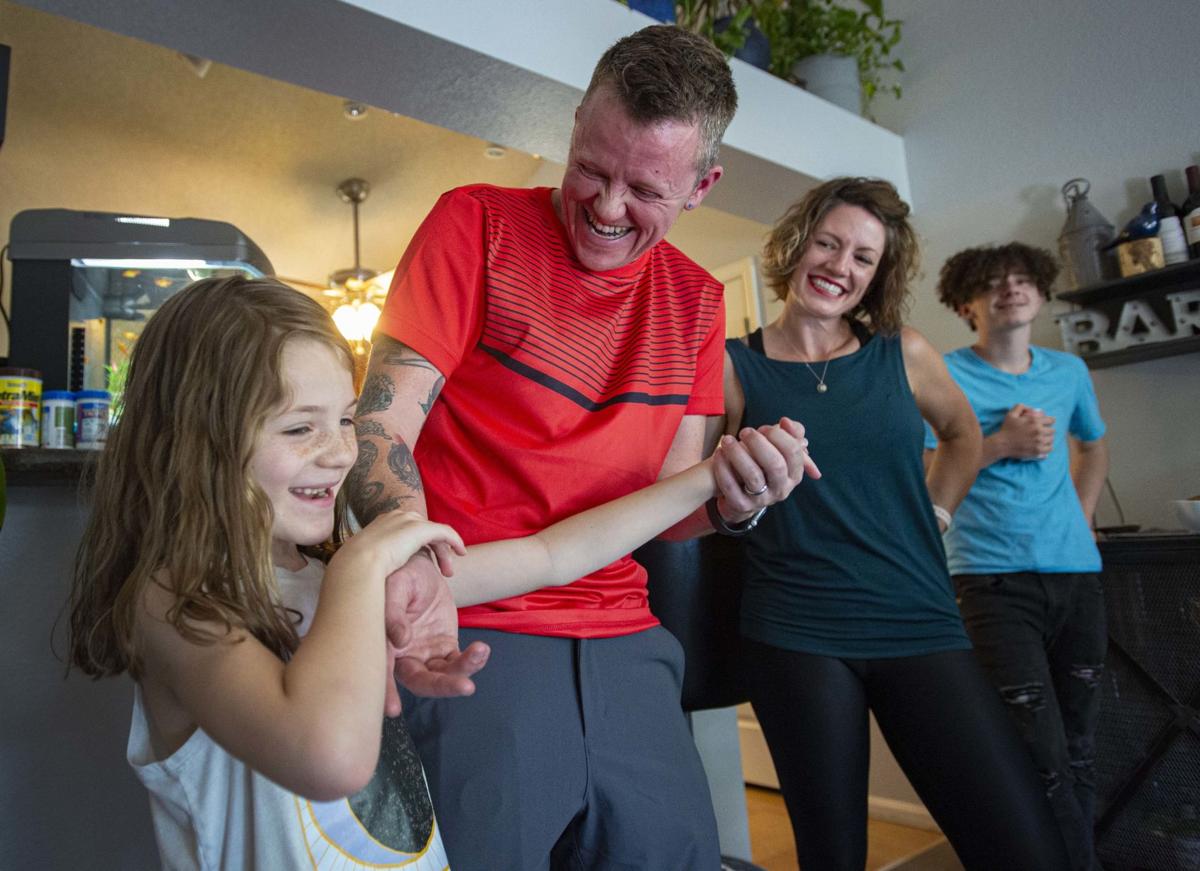 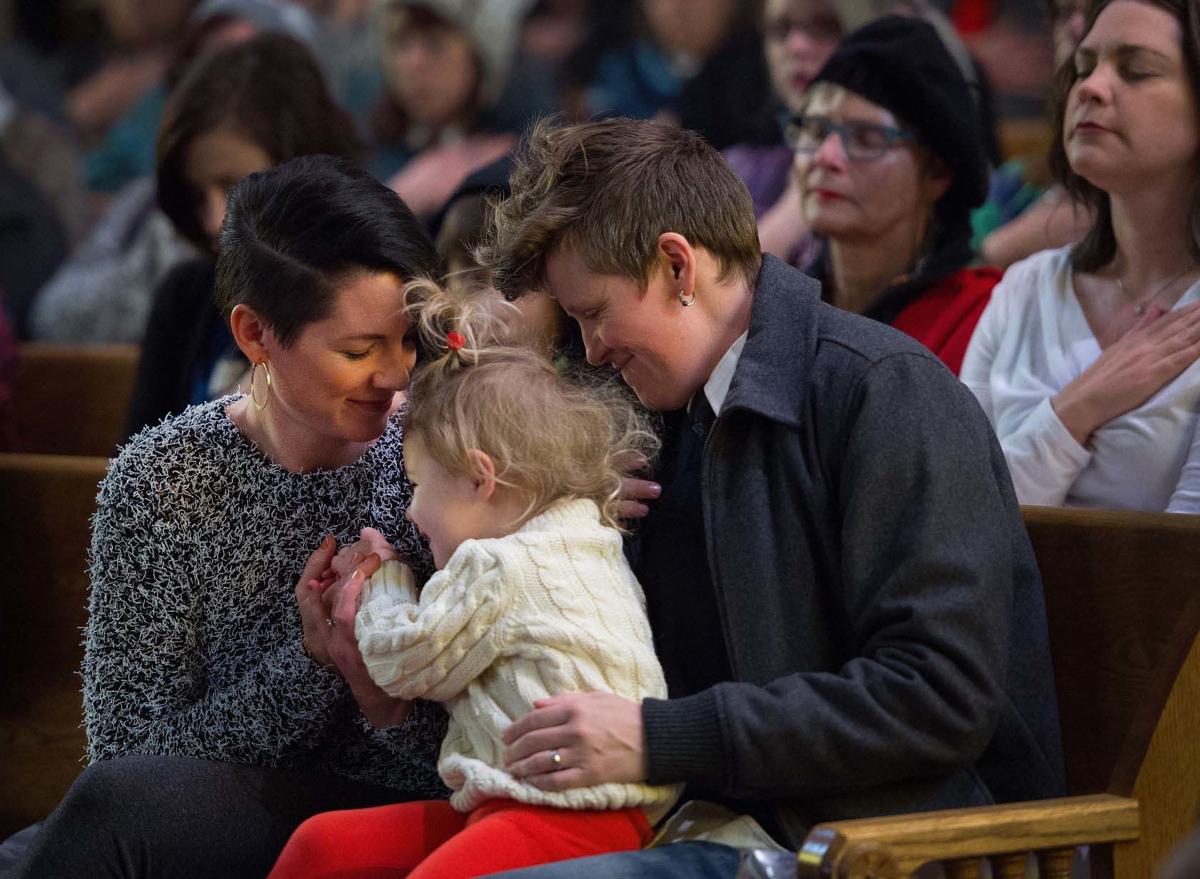 Erika Highstead-Musick, left, and Silas Musick hold their daughter, Wren Musick, then 2, on Nov. 28, 2015, at the All Souls Unitarian Universalist Church in Colorado Springs to grieve those killed in the Planned Parenthood shooting the day before. 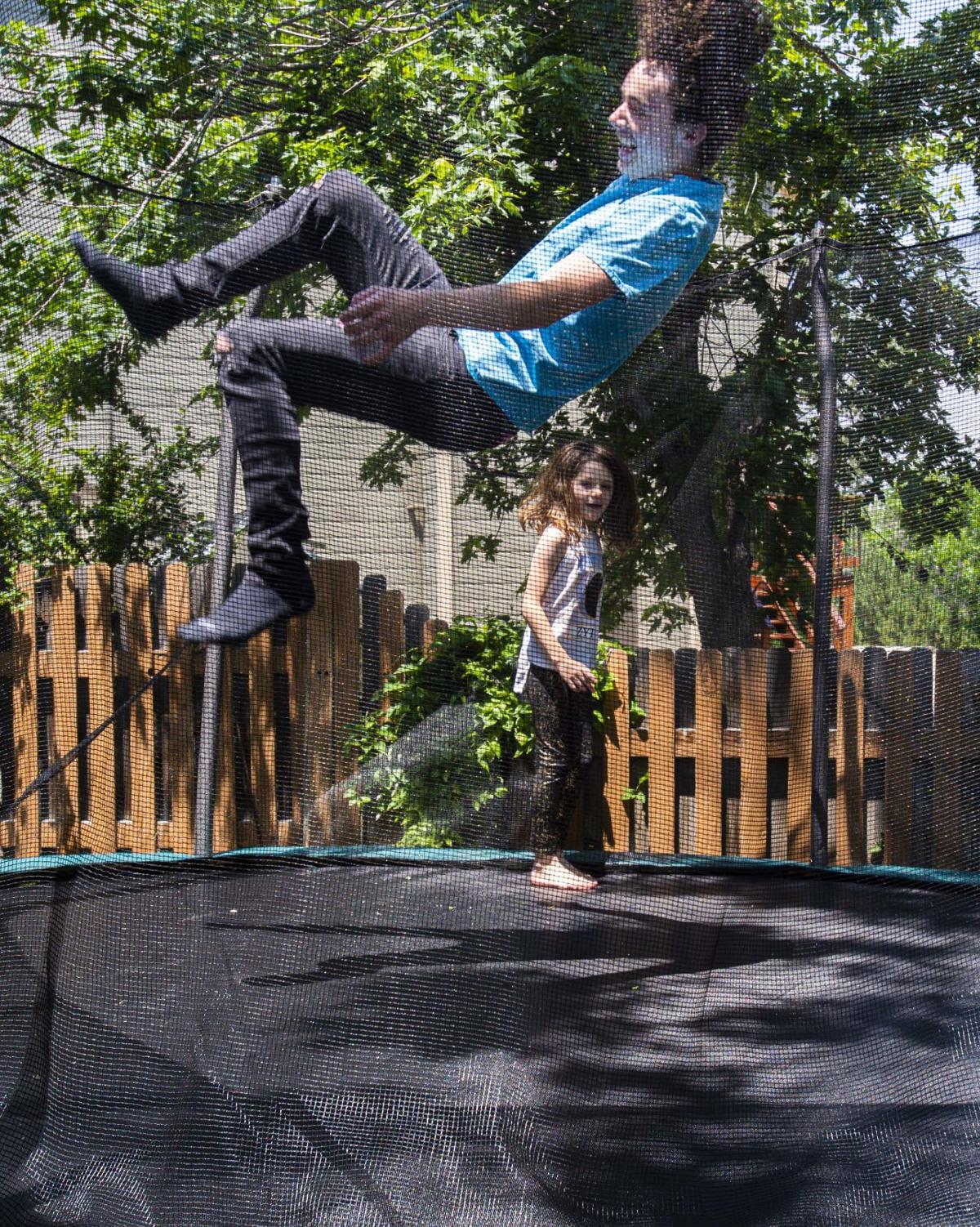 Jack Highstead, 16, and Wren Musick, 6, play in the backyard of their Parker home Monday, June 15, 2020. (The Gazette, Christian Murdock) 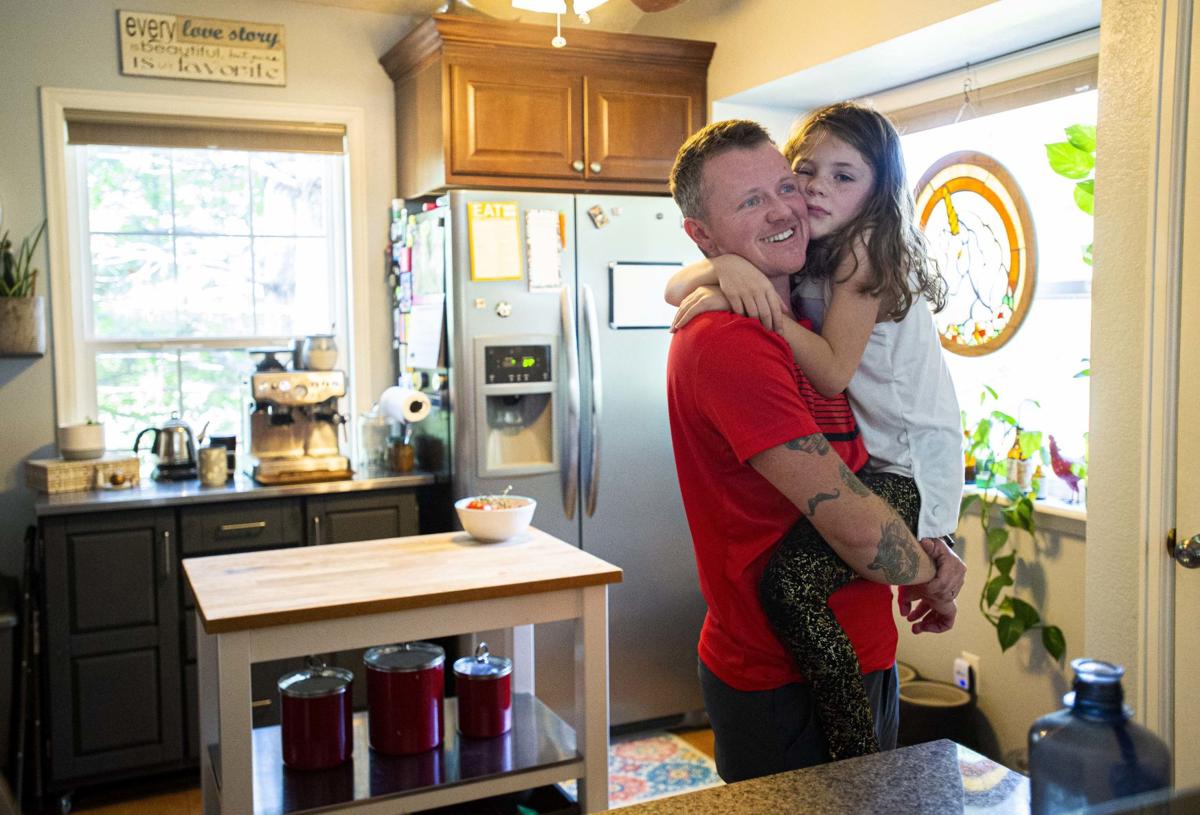 Silas Musick hugs his daughter, Wren, 6, while making coffee at their home in Parker. 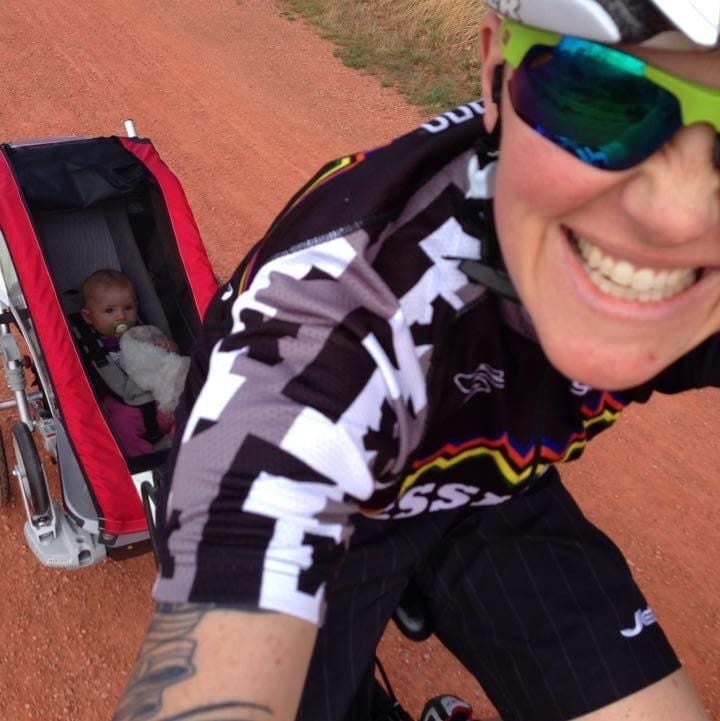 Silas Musick biking with his daughter 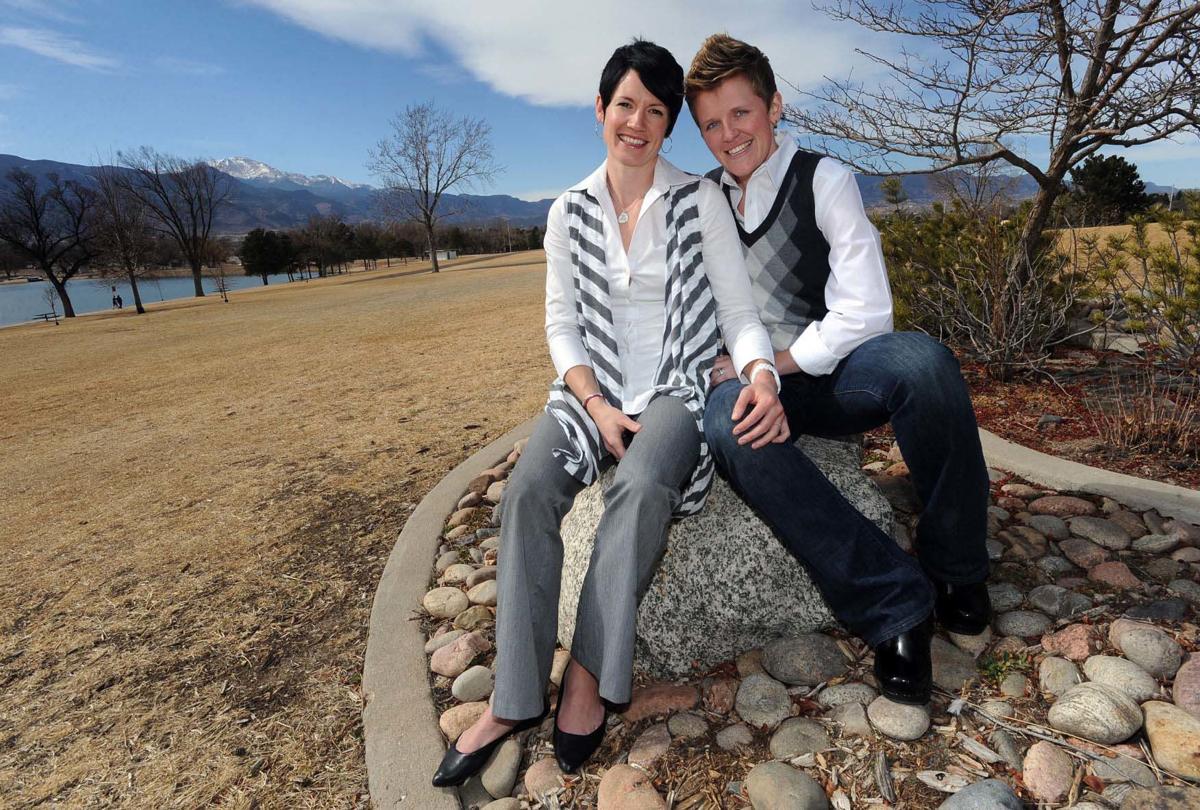 Erika Highstead-Musick, left, and Silas Musick are pictured in Colorado Springs’ Memorial Park in 2011 after Ericka saved Silas from a suicide attempt. The couple was active in changing state laws to allow hospital visitation rights to partners who weren’t legally married.

Silas Musick, left, his wife, Erika Highstead-Musick, daughter Wren Musick, 6, and stepson Jack Highstead, 16, pose for a recent picture at their Parker home. The family moved to the Denver suburbs last year from Colorado Springs to be closer to work.

Erika Highstead-Musick, left, and Silas Musick hold their daughter, Wren Musick, then 2, on Nov. 28, 2015, at the All Souls Unitarian Universalist Church in Colorado Springs to grieve those killed in the Planned Parenthood shooting the day before.

Jack Highstead, 16, and Wren Musick, 6, play in the backyard of their Parker home Monday, June 15, 2020. (The Gazette, Christian Murdock)

Silas Musick hugs his daughter, Wren, 6, while making coffee at their home in Parker.

Silas Musick biking with his daughter

Erika Highstead-Musick, left, and Silas Musick are pictured in Colorado Springs’ Memorial Park in 2011 after Ericka saved Silas from a suicide attempt. The couple was active in changing state laws to allow hospital visitation rights to partners who weren’t legally married.

PARKER • Silas Musick would not be accepting a new lawnmower for Father’s Day.

His wife, Erika, proposed the gift, but Silas figured a man could fix his own lawnmower. And so Silas did.

“It took a couple of videos to figure it out,” he says, “but I know the inside of a lawnmower now.”

He got the weed eater in shape, too, he was proud to report one sunny day at his family’s home in the Denver suburbs.

They moved here from Colorado Springs a year ago. It was to be closer to work — Silas, 38, serves a nonprofit dedicated to social justice while Erika, 41, is a nurse at a nearby hospital — but the move also granted a fresh start.

The backyard represented that. Leafy and green. Big enough to fit a hot tub and a trampoline for the kids, Jack, 16, and Wren, 6. And under the watch of Silas, it would be a well-kept yard indeed.

But he’s all too aware of how this sounds, this certain macho pride. He has to catch himself.

Every father is learning. And on his fourth Father’s Day since coming forward as a transgender man, Silas is no exception.

“It has been so natural to want to take over society’s expected roles of a dad, and I hate that,” he says. “I caught myself really early on in my transition, being like, ‘All right, honey, time for you to get the kids ready for bed or make my dinner.’ ... I’ve tried to be intentional about not being like the stereotypical guy role or dad role in our marriage, in our family.”

That’s been him with Jack, his stepson. Silas has said sorry so many times. Sorry for feeling sad, just not in the mood. Sorry for letting his anger get the best of him. Sorry for overstepping as a stepparent (Jack is Erika’s through a previous marriage).

Sorry, Silas has said, for trying to project his manhood.

“At times he has parented me and been like, ‘You are a complete, legit guy, and you need to stop thinking that you aren’t,’” Silas says. “And I’m crying, and he’s like telling me it’s OK to be who I am.”

It wasn’t the same guilt, that teenaged guilt that haunted Silas for being gay. It was a different guilt when he began his transition — guilt that it would be too much for Jack, that he would “push back,” Silas says, “and be like, ‘I don’t want any part of this.’”

Jack has been entirely supportive. He exemplifies his mother’s enduring love.

Erika met Silas, then going by Sarah, in 2006 in the Springs. She met someone who exuded confidence — racing bikes, conquering 14,000-foot peaks — but deep down lacked it.

There were vicious demons. And once they nearly won, if it weren’t for Erika saving him.

The suicide attempt was 10 years and another lifetime ago.

“Watching Silas come into who he is, who he believes he’s always been, has been really beautiful,” Erika says.

And fatherhood has become essential to who he is, “super validating,” he says. Wren was 3 when Silas started his transition in 2016.

“She has been my biggest fan,” he says.

On this day she’s left surprise notes in her parents’ bathroom: “I like mom” and “I like dad.” She jumps into her dad’s arms and later bounces on the trampoline with Jack.

Silas watches them, smiling. He looks at his wife smiling at him.

He has to catch himself again. He can’t be telling himself that, he knows.

“And so there’s always this layer of sadness for me. Because I want to celebrate being a father with my father, and that’s not an experience that I will likely ever have.”

It was there growing up in southwest Virginia, strong as the walls his parents built. They built a cabin out of the trees they cut.

“They were like homesteaders in the ’80s,” Silas fondly recalls. “They dragged the poplar trees out with a team of mules and an old Dodge pickup truck, ... Our house was like a tour. You’d take a tour through our house.”

And inside there would be their firstborn, a devout member of Dad’s flock. The child would leave a Bible and prayer journal open on the bed, just for Mom and Dad to see, just to make them proud.

Curiously, the toddler would prefer chopping wood with Dad or tinkering with the tractor rather than helping Mom in the kitchen, as was expected. But they seemed proud of the youngster’s love for horses.

Silas got a horse at age 12, going on to ride in shows and feeling awkward in a bright pink jacket. Silas would take a horse on to college, the first in the family to go.

“I actually think in a lot of ways horses saved me as a kid, saved me from myself.”

The secret girlfriend in college came to light. Conversion therapy was suggested. It was offered in Colorado Springs.

Silas reported back to the family: It didn’t work. More spoonfuls of scripture didn’t work back in Virginia, either. The firstborn was no longer welcome at home.

So at age 23, Silas loaded a Jeep Cherokee and drove across the country, back to the mountains to craft a new destiny.

His childhood love of mechanics — those afternoons tinkering with Dad — took him to jobs in bike shops. He’d ride for hours on end. On the trail, it wasn’t so much about liberation as it was about the burn.

“How much can I hurt myself on this bike?” as Silas puts it. “I did feel like I needed to be the best at it. I never got over that, just trying to prove myself, prove that I had a place in the world.”

Then came a girl, Erika. She had her insecurities. But around Silas, she laughed and felt like royalty.

But Silas failed to make himself feel better. He felt like an orphan. He’d feel mad at his parents, then he’d miss them, then mad again and sad again. The burn on the bike could only occupy his thoughts for so long.

There was “a storm inside,” he says, and it was building — guilt over his parents swirling with guilt over Erika, feeling that he was unworthy of her, unworthy of everyone.

One night in 2010, he fashioned a noose for himself.

When that didn’t work, he turned to pills and tequila.

Erika arrived home from nursing school to find him unconscious. She performed CPR.

He’d wake later in the intensive care unit, ashamed. Erika would be there. She wasn’t going anywhere.

She was purple in Silas’ arms, the blood still flowing.

“I had never felt such love,” he says. “And then immediately, I felt so sad. For the (realization) that my parents had felt that when I was born ... I knew they felt that for me.”

He took the family to visit them a few years ago, he says. It didn’t end well.

He’s found it better to reflect positively on his adolescence. It turned dark, but it was bright for a while. “I loved where I came from,” Silas says.

The cabin. The land. The horses. He’d like that kind of life for his own children. “The good parts,” he says.

One part is covered. Bowie is the palomino quarter horse that joined the family last month.

“It’s my horse,” Wren says here at the house.

Wren shakes her head. “You can help me.”

Surely he’ll take the reins here and there, to reconnect with that happiness from his childhood.

But every father is learning. And Silas will learn to help his girl, and he’ll watch her ride, and he’ll feel the pride swell up inside, and there will be no doubts, no apologies, nothing in his world but peace and joy.

Colorado Springs woman teams up with dad in plumbing business

Chris and Persephone Parker make up Father Daughter Plumbing and Drain Service in Colorado Springs. Chris has been a plumber for nearly 20 years, working for various companies before launching the business this year; Persephone is a fourth-year apprentice, working under her dad's supervision.