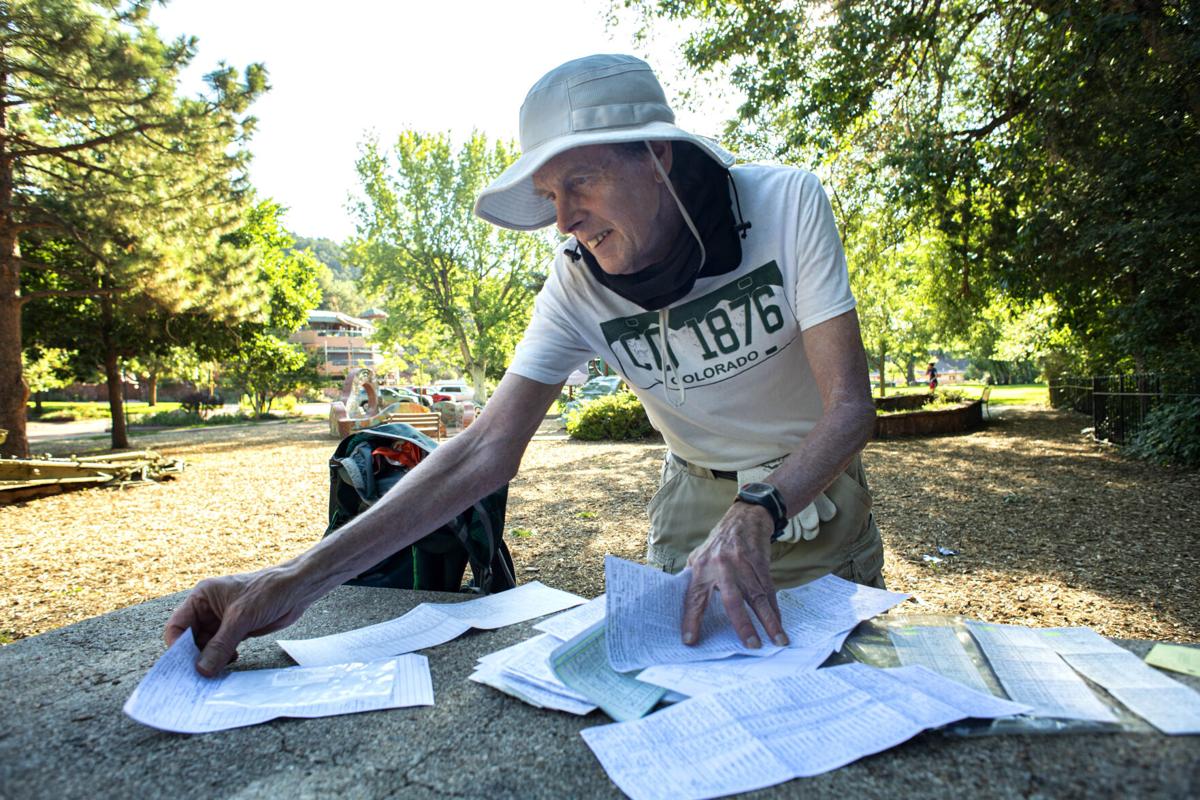 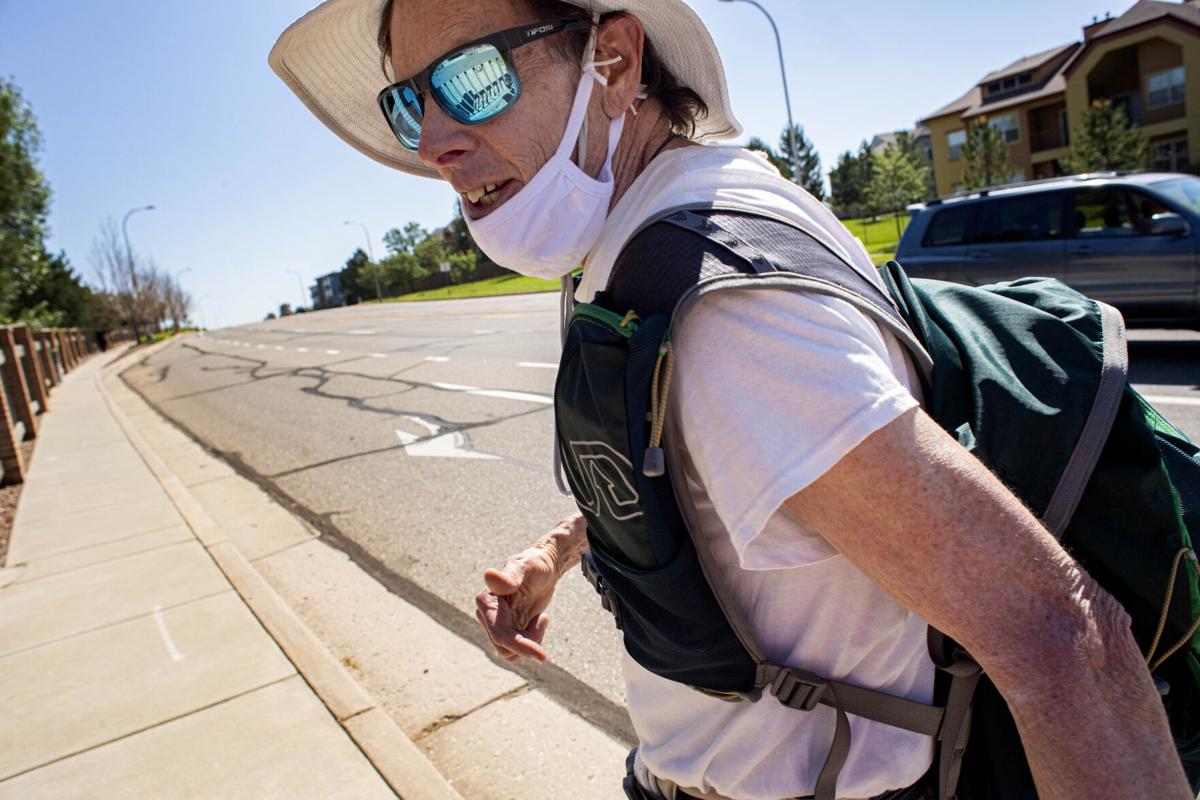 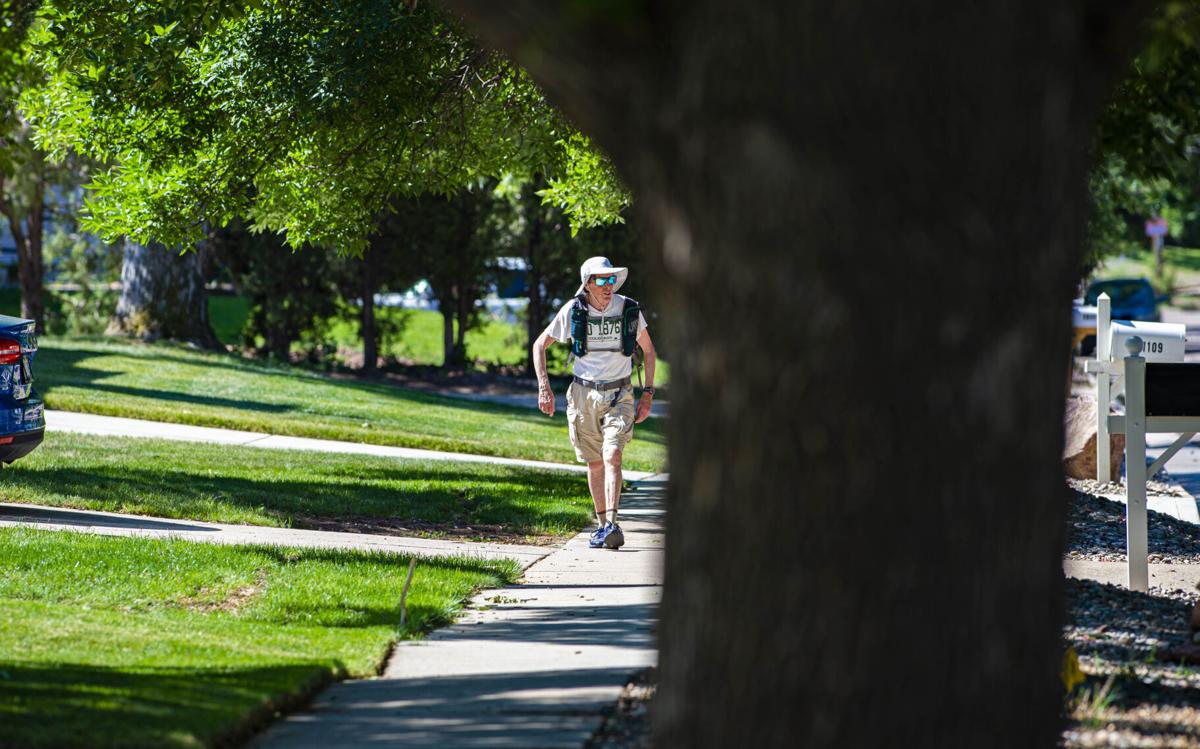 Craig Burbank, 66, walks through the Pleasant Valley neighborhood on his way to Costco on North Nevada Avenue last week. Burbank made the 9.5-mile trek in three hours. After shopping, he took the city bus home to Manitou Springs. 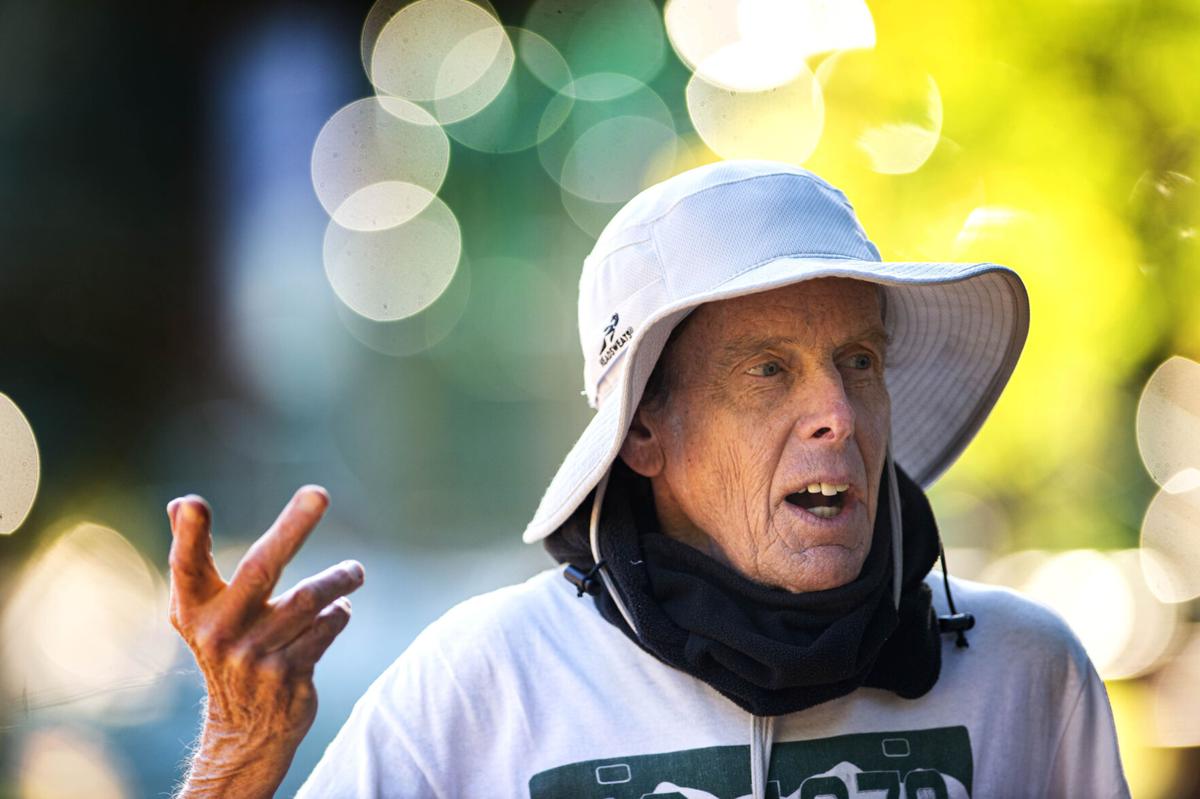 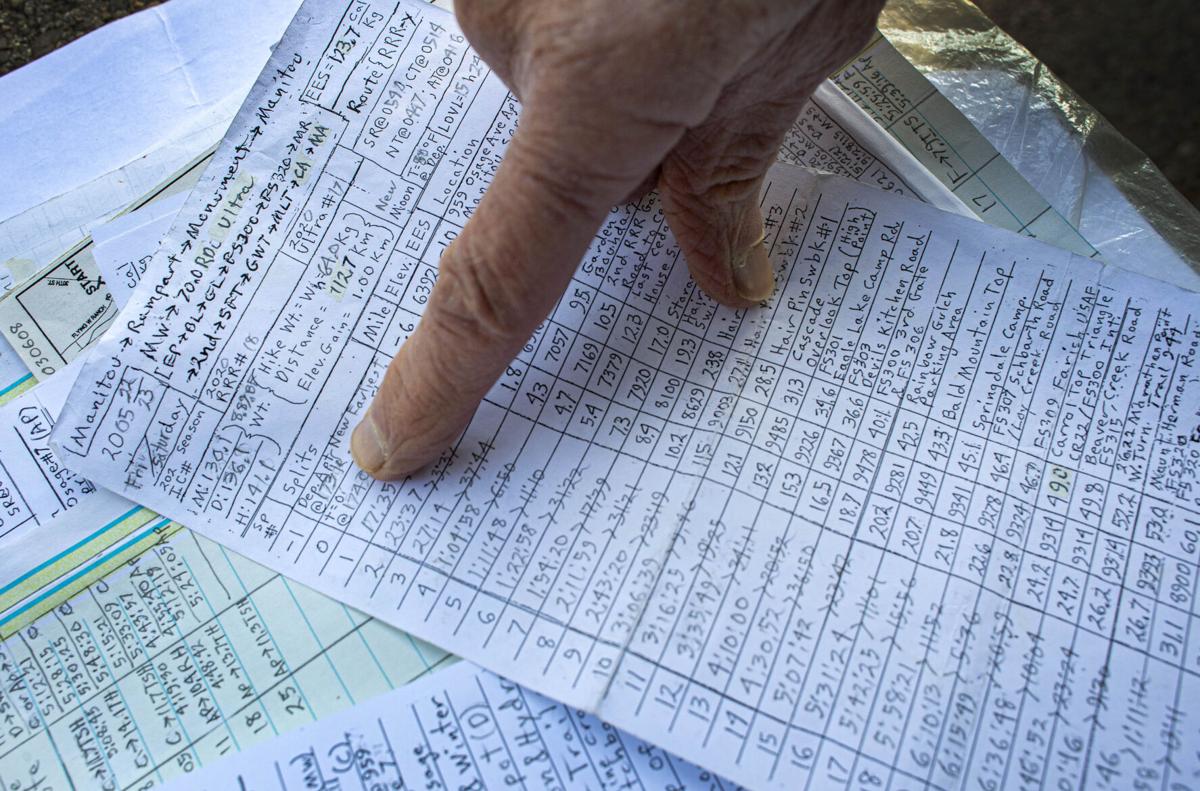 Craig Burbank writes detailed logs including his weight (morning, dressed, and with hiking equipment), stage times and locations, and his “energy expenditure score” or his calculation using calories burned, his weight in kilograms and altitude. 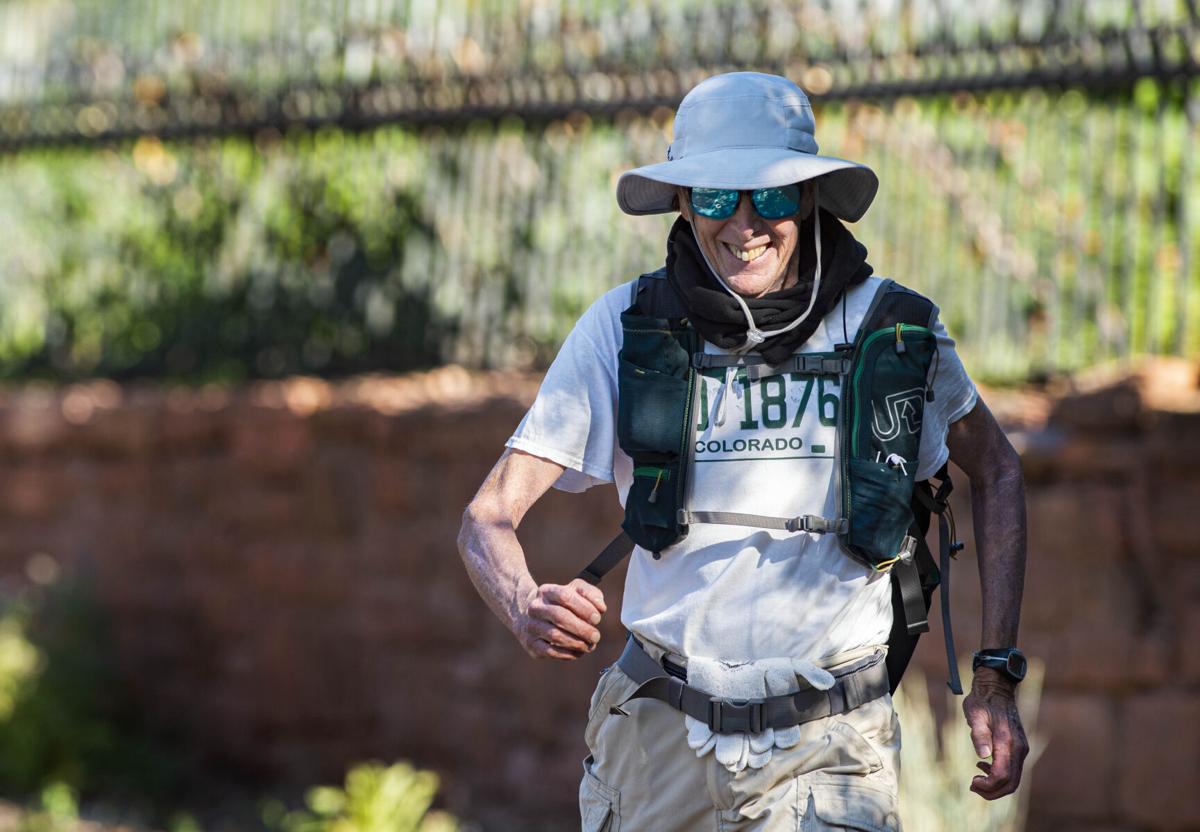 Craig Burbank marches along El Paso Boulevard. on his way to Costco, 9.5 miles away. 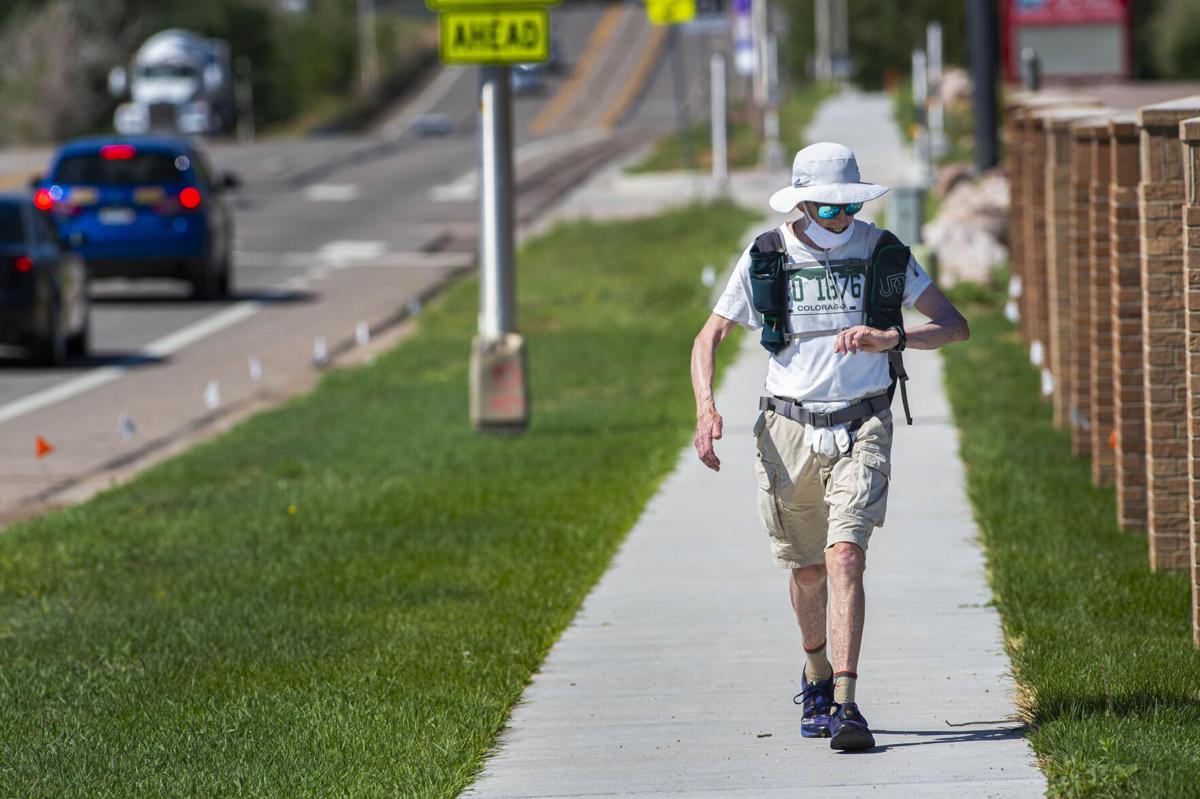 Craig Burbank, 66, checks his computer for his time as he walks along West Filmore Street Tuesday, July 21, 2020, toward North Nevada and Costco. He made the 9.5-mile walk in 3 hours. (The Gazette, Christian Murdock) 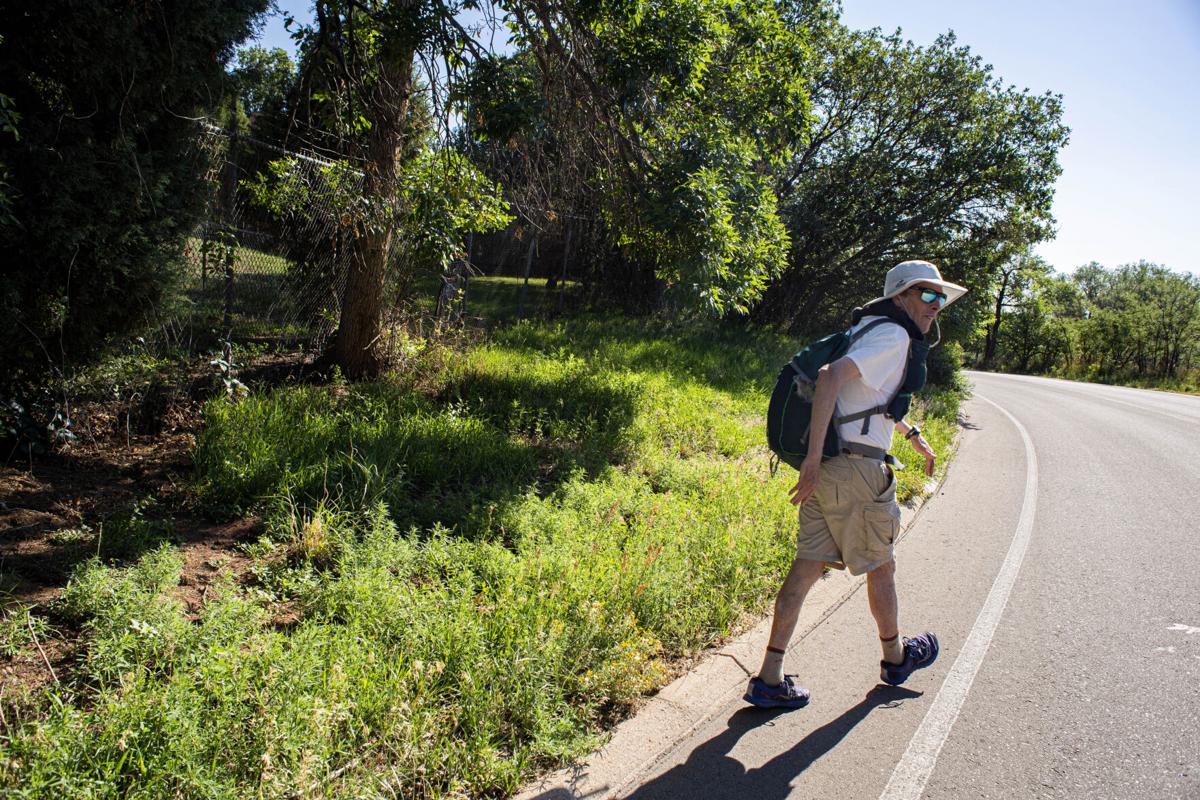 Craig Burbank marches along El Paso Blvd. on his way to Costco, 9.5 miles away Tuesday, July 21, 2020. (The Gazette, Christian Murdock)

Craig Burbank marches along El Paso Boulevard. on his way to Costco, 9.5 miles away.

Craig Burbank, 66, checks his computer for his time as he walks along West Filmore Street Tuesday, July 21, 2020, toward North Nevada and Costco. He made the 9.5-mile walk in 3 hours. (The Gazette, Christian Murdock)

It was after midnight on a Friday when, walking along the side of the highway, Craig Burbank turned to see blue and red lights flashing.

The state trooper wanted to know what this guy was up to.

“I’m out for my ultra walk,” the 66-year-old Manitou Springs man said.

U.S. 24, the steep thoroughfare west through the canyon, was a regular route for him, he explained. In Woodland Park, Craig might stop at his favorite breakfast spot, use the internet at the library, and take the bus back and call the roughly 15-mile walk good for the day.

But this was an ultra walk. Craig counts an ultra as anything more than 26.3 miles, as outlined in the voluminous, handwritten log sheets he preserves in ziplock bags.

Anyway, that’s what Craig was up to here in the middle of the night. Another ultra walk.

Craig recalls the trooper being at a loss. “He said he hadn’t seen anybody doing that.”

On this sunny morning, Craig leaves his Manitou apartment where he lives alone. He continues on the backroads to avoid stoplights. He doesn’t like stoplights.

“See, I like this because there’s a nice crosswalk here,” he says at 31st Street, crossing to the other side of the neighborhood.

This is “a refresh day,” Craig says. He needs groceries. And since he doesn’t own a car — hasn’t in 27 years — he goes on foot. He’ll stuff what he can in his backpack and carry the rest on the bus coming home.

This is an urban day in the life of Craig. Many more days are spent on Barr Trail, the path to Pikes Peak’s 14,115-foot summit.

He ascended just a few days ago, starting from his apartment at 5:50 a.m. and finishing the almost 14-mile trek in 5 hours, 24 minutes and 5 seconds. A fine time for him at his age, he reckons, though he worries about his lung capacity.

“Maybe 10% to 15% down,” he says. “But I’m still fairly strong actually. This ultra training has rebuilt my strength.”

Also on his log sheet for the climb, you can find his “energy expenditure score,” his calculation using calories burned, his weight in kilograms and altitude. His weight for the morning was 132.6 pounds, he noted, while his “hiking weight” with gear and all was 139.7 pounds. Also above 29 detailed split times and locations, he jotted numbers related to sunrise, civil twilight, nautical twilight and astronomical twilight.

“Craig has amassed some incredibly impressive training stats,” reads a recent blog post by Zach Miller, the North Face-sponsored ultra runner who has served as Barr Camp’s resident caretaker, getting to know Craig quite well at Pikes Peak’s halfway station. “Craig the Walker,” Miller calls him.

Caretakers for decades have known Barr Camp’s forest above 10,000 feet to be a hub of oddities. Of training athletes, yes, but also of wandering souls. Of colorful characters with mysterious pasts. Of the mentally untreated. Of the grieving. Of the lost and lonely. Of “misfits,” says one previous, longtime caretaker, Teresa Taylor.

Part of the job is listening, she says. And so she and her husband, Neal, would listen to Craig as he talked and talked.

“He doesn’t have family. He doesn’t have anybody,” Teresa says. But rather than talk personal matters, Craig would keep conversations technical before walking on.

Anyway, “at Barr Camp, Craig fits right in,” Miller wrote. “Yet, as much as he fits in, he also stands out. ... For one, Craig probably walks more than any other hiker. In fact, he probably does more mileage than most runners.”

Ultras were his goal in 2019. He racked up 39, including five 50-plus-mile days and nine 40-plus-mile days. They might be better described as “nights,” for many hours were walked under the stars.

The longest was achieved on the high dirt of Rampart Range Road, down into Monument and back to his apartment via the Santa Fe Trail and other sidewalks and roads. Craig walked for 20 hours, 21 minutes and 21 seconds.

This summer, he’s eyeing the full length of Rampart Range Road to Sedalia, what his Google Earth printout shows as 56.7 miles. (He’s arranging for a ride home). The printout is from the library, where he connects his old flip phone to the computer and prints out its trove of pictures.

He has a TV at the apartment — “mostly for the weather,” he says — but maybe his most complex piece of technology is the outdated watch that tracks his walking stats by syncing with the pod on his shoelaces. The pod is broken. But he knows how to adjust the insides with tweezers so that the green light pops up. And off goes Craig the Walker.

“I’m kind of a minimalist in the sense I’m into simple things, not having a lot,” he says.

He was pleased to let go of his Geo Metro in 1993. He figured he’d save the planet from the exhaust fumes and his bank account from the insurance.

So began his commuting on foot in California — about 90 minutes to cover the 4 ½ miles to his technician job. And so began his competition with himself, to improve his time.

He took it to another level in Colorado Springs, where he moved for the mountains in 1998. He found a vibrant running scene, a club that included Barr Camp’s Taylors.

Craig would come to meet-ups in cotton overalls. “And we were all of course runners,” Neal Taylor says, “but this dude would show up and walk.”

Maybe it had to do with what the great thinkers of time have extolled. Henry David Thoreau left us with “Walking.” By walking “one receives far more than he seeks,” said John Muir. “All truly great thoughts are conceived by walking,” said Friedrich Nietzsche.

Craig talks of walking in a purely mechanical sense. Indeed, he says, the body is “a machine” that must be maintained.

And “not to knock running,” he says, but running was hard, and recovery was harder, and he senses his time on Earth will be increased through walking. And also through a regimented diet; he sometimes splurges with yogurt, berries and nuts before bed by sundown.

Anyway, Craig could do what the runners did. He walked the Pikes Peak Marathon, his best performance coming in 2003 with a time of 6 hours, 13 minutes and 55 seconds. He got a bad feeling about this, because in 2001 he recorded an inverted time of 6 hours, 55 minutes and 13 seconds.

“I’d heard of people having knee problems,” Craig says. “So I thought maybe that was an omen or warning that I shouldn’t do the Marathon anymore.”

His longer days and nights on foot would come.

But first, he had to go home to Arkansas to be with his mom.

He moved in with her in 2008. He pushed carts at Walmart and reupped his driver’s license, because she needed a way to get to medical appointments.

Previously, at Barr Camp, the Taylors knew Craig as the analytical guy, the guy with his meticulous log sheets. He’d talk and talk while folding paper into complex, geometric shapes. He’d talk about lowering his electric bill by a matter of cents. He’d talk about solving routes in town that allowed him on foot to beat the bus to some places, routes without stoplights.

His tone changed before leaving to be with his dying mom.

“That was the first time I saw the real, emotional side of Craig,” Teresa Taylor says, getting emotional herself by the memory. “That somebody like Craig could be that raw ...”

“And actually hug and cry,” Neal Taylor says. “That’s just not a side of Craig people see.”

What people see on this day is a skinny man charging up a hill on his way to Costco.

Stop to ask him where he’s been, and he might offer that he was once an “introverted” boy, “kinda into math.” He was just a boy when his parents divorced, a momma’s boy who stuck by her side, growing up to bounce around jobs. “I guess I was trying to find what I really liked,” he says.

It turned out to be walking.

“His stride is strong and purposeful,” Miller wrote. “His arms pump like the piston of a Chevy big block. His posture is slightly hunched, like he’s leaning fully into what he’s doing, which he is.”

Which he is doing now on the way to Costco. He’s working up a sweat. The traffic is loud and constant, though he doesn’t seem bothered. He checks his watch for stats but otherwise keeps his gaze on the horizon.

Later, done shopping, he stands by the bus stop only to realize the bus is still 21 minutes out. He isn’t about to stand around and let time tick on.

And so, burdened or not by the weight of groceries, he goes for another walk.

Craig by the numbers

Best mileage walked in a week: 168

Sarah Hansel raced to a class of her own on July 8, when she completed the cult classic challenge known as Nolan's 14.