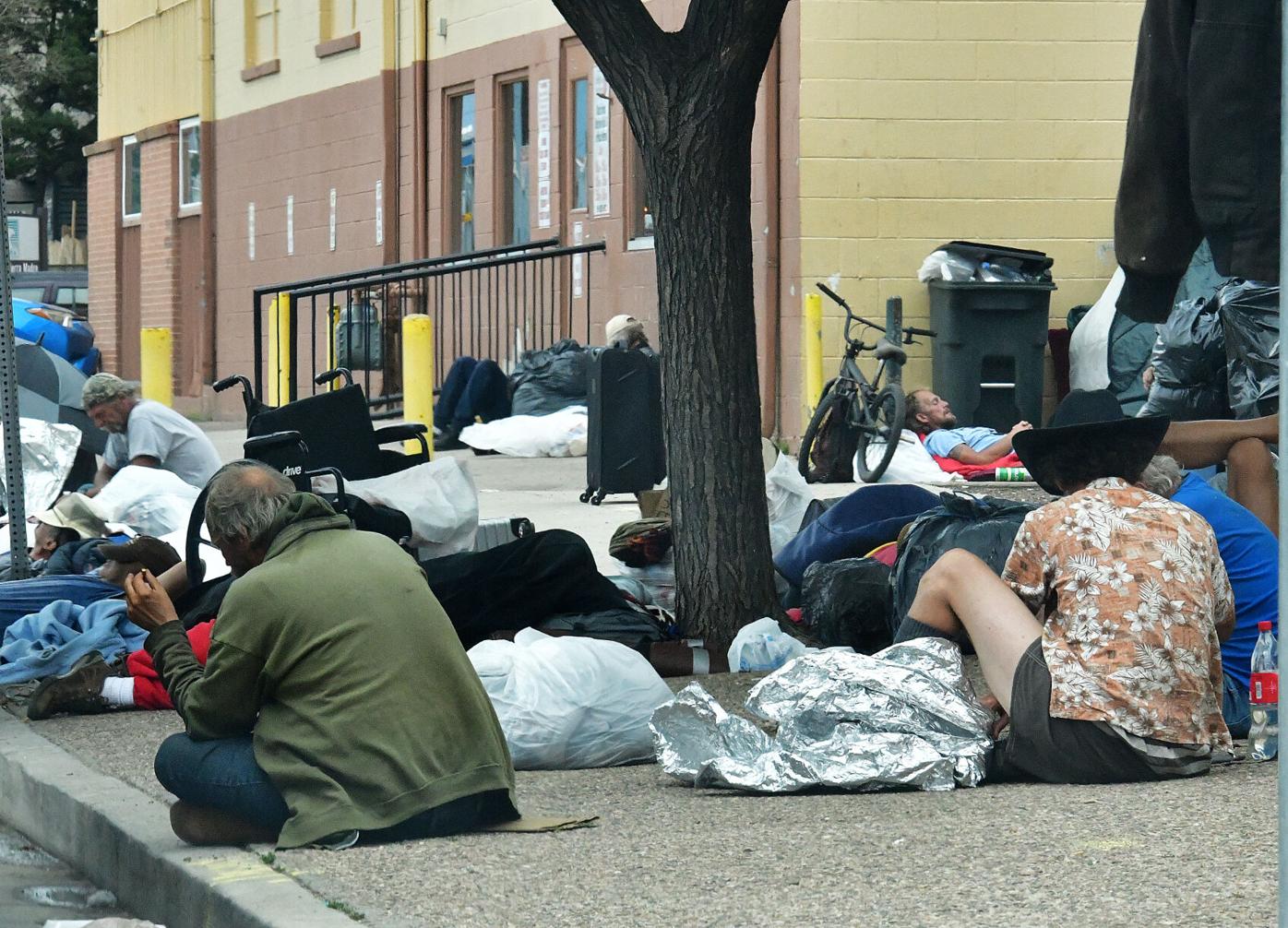 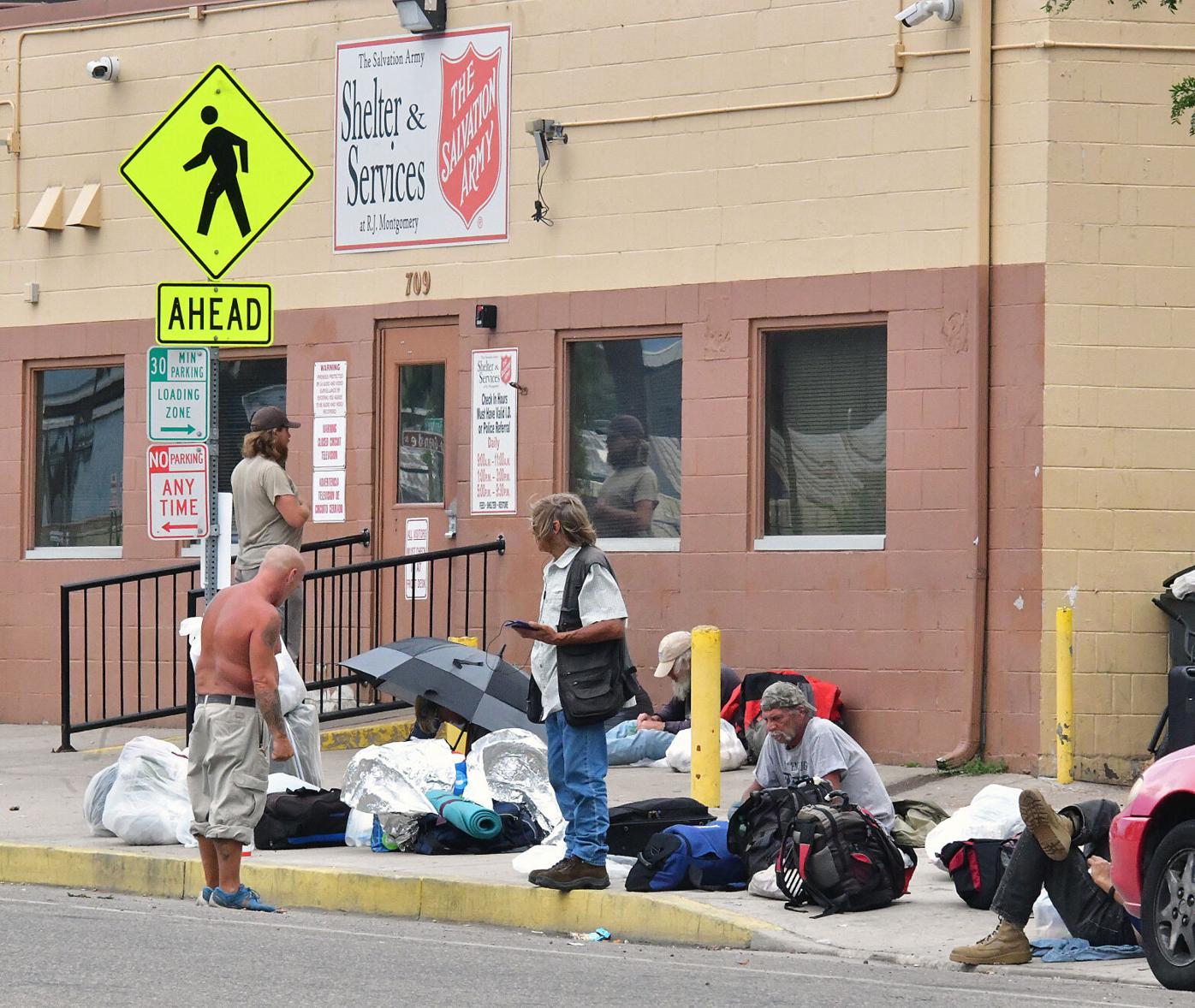 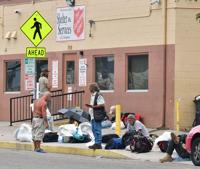 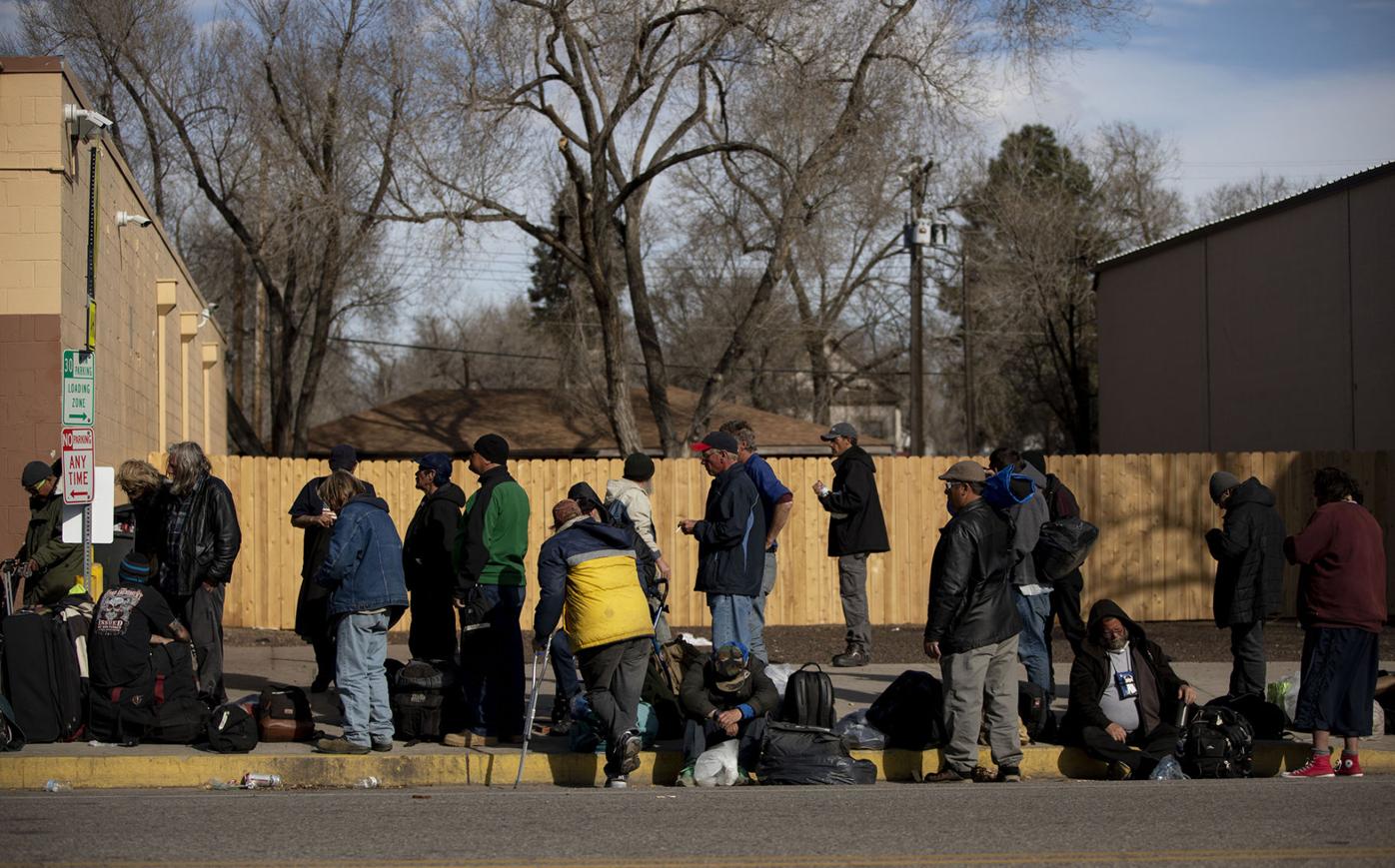 People line up at the Salvation Army shelter on Sierra Madre Street in Colorado Springs on Wednesday, March 25, 2020. (Chancey Bush/ The Gazette)

People line up at the Salvation Army shelter on Sierra Madre Street in Colorado Springs on Wednesday, March 25, 2020. (Chancey Bush/ The Gazette)

A tiny, boarded-up diner on West Cimarron Street that over the years had survived a fire and a murder got hauled away last weekend, representing another step in the transformation of southwest downtown Colorado Springs.

As massive redevelopment reshapes the cityscape with the soon-to-open United States Olympic & Paralympic Museum and an under-construction soccer stadium, some wonder whether the 220-bed homeless shelter a few blocks away will be displaced as well.

“There is an unfortunate clash between the redevelopment and the homeless,” said Gary Feffer, a seasoned commercial real estate broker and owner whose office is in the area.

“As new projects occupy empty lots or buildings, the development is starting to infringe on locations where the homeless have found refuge,” he said.

In less than a year, Sahwatch and Sierra Madre streets south of Cimarron Street will look and feel vastly different.

The 8,000-seat Switchbacks stadium, set to open in the spring of 2021, will draw soccer fans, concertgoers and other event attendees.

Roads in the industrial area will be widened and enhanced with streetlights and sidewalks.

West Moreno Avenue between Sahwatch and Sierra Madre will be converted from a roadway into a pedestrian plaza that will separate the stadium from proposed apartment complexes with as many as 1,000 units and an entertainment district with shops and restaurants.

“There certainly has been a lot of interest in southwest downtown,” said Ryan Tefertiller, urban planning manager for the city of Colorado Springs.

The revitalization projects will attract residents and tourists, but will those who travel what some call “the homeless highway” — the route the homeless trek between the Marian House Soup Kitchen, the R.J. Montgomery Center homeless shelter and the Springs Rescue Mission — still be welcome?

Feffer is not so sure.

What has been a safe haven for the homeless for decades is “not compatible” with the new projects, he said, which are expected to turn the industrial area near the interstate and railroad tracks from an eyesore to an eye-catching upgrade.

“There are some risks and challenges from the safety and comfort perspective,” Feffer said.

Homeless will be 'less tolerated'

The Pikes Peak chapter of the American Red Cross bought the property at South Sierra Madre and Rio Grande streets in 1990, according to county assessor’s records, and ran it as a homeless shelter. The local chapter of the Salvation Army acquired the site in 2007, records show, but has operated it for 17 years.

Capt. Doug Hanson, who heads the Salvation Army El Paso County, said no one has approached him about possibly relocating the shelter.

He imagines the church might be willing, if those who push for such a change can answer this question: Would it still serve the needs of the homeless population?

“Often, the homeless population don’t have a voice, they don’t have a platform to talk, so we advocate for them,” Hanson said.

“I suppose there would be flexibility in serving the people, but I don’t want one group to be favored over another.”

Even with Springs Rescue Mission, farther to the south, expanding its campus for the homeless last year, the Salvation Army shelter is continuing to run at 90% to 100% capacity for singles this summer, Hanson said.

Plus, Hanson considers the property, with an estimated market value of nearly $1 million, according to the assessor’s office, to be in the perfect spot for those who walk the circuit to obtain free meals, a bed for the night, job searching tools, medical appointments, addiction counseling and other assistance.

But with the coronavirus pandemic, more clients have been hanging around outside the Salvation Army shelter during the day. Clients are released between 8 a.m. and 8:30 a.m. each morning after receiving a cold breakfast.

The doors reopen for families at 4:30 p.m.; single men and single women can check in after that. Admission now takes longer, Hanson said, because of new temperature checks and a personalized health assessment.

Closing the downtown library and businesses because of the pandemic left many clients with nowhere to go during the day and limited ability to panhandle for money or Dumpster-dive for leftover food, Hanson said.

The Salvation Army opened a temporary day center for families with children to do online schoolwork and tutoring, and the organization’s childcare center has since reopened. The organization also activated a mobile food canteen for the area during the worst of the pandemic shutdowns.

Now, with public movement still limited to a degree, the homeless are more visible in the neighborhood, Hanson said.

As that happens, transients with their belongings strewn across the sidewalks will be “less and less tolerated,” he said. “It just doesn’t look good.”

Parkhouse, who was homeless after exiting military service during the Vietnam War, helped set up the city’s original homeless shelter in May 1984, after the county poor farm closed with just three months warning and nothing to replace it.

He has participated in many community efforts, including a failed movement in the late 1990s to build a supersized soup kitchen and 400-bed mega shelter. Parkhouse opposed the idea, citing examples of cities where that setup didn’t work.

The same problems that existed with the homeless population 20 years ago still exist today, Parkhouse said, who doesn’t think the “no questions asked policies” model of serving the homeless is effective.

“Most of what people were afraid of then have come to pass today,” he said. “The Mill Street neighborhood is being impacted by dozens and dozens of enabled vagrants who have become acclimated to street life.”

In recent months, transients have broken into empty homes in the neighborhood and become squatters, property owners say.

But if the homeless shelter is pressured to move, it will be difficult for clients who have encountered hardships such as job loss and eviction, and already struggle shuffling between agencies, Parkhouse said.

If relocating comes to the table, both Feffer and Parkhouse think a proposal will come from a developer in the private sector, not the government.

No one has inquired, said Tefertiller, the city’s urban planning manager. In fact, the concept might prove too difficult, he said.

The shelter sits on the edge of the historic, working-class Mill Street neighborhood, which underwent a two-year community development process to establish an improvement and resiliency plan that received final city approval last year.

Results from a 2017-18 public survey showed people who live and work in the neighborhood most like its convenience, affordability and history. A majority of respondents listed reduced crime, improved looks and solving housing affordability as results they desired.

Buildings that have been removed or are earmarked for redevelopment have been zoned for light industrial or commercial use, not residential, Tefertiller said.

“There have been no plans or property acquisitions south of Rio Grande Street,” he said. “With the ownership configurations, land use patterns and zoning it becomes a large challenge in terms of development.”

Regardless of the enhancements, those who are homeless still need somewhere to go and receive services, Feffer said.

“Ninety percent of the homeless are housed every night by a faith-based organization,” the Salvation Army’s Hanson said. “We’re here fulfilling a mission we believe we got from God.

“As you improve the buildings and businesses and tourism, this doesn’t solve homelessness,” he said. “No one said it did — but you have to meet their needs as well.”

Homelessness is a community issue that needs a community solution, said Travis Williams, chief development officer for Springs Rescue Mission, which provides shelter for 300 to 325 people a day during the summer and serves 700 meals a day.

“We have to look at all spectrums, so that while we’re serving development, we’re also serving the most vulnerable at the same time,” he said. “It’s a tension.”

The project not only added to the neighborhood’s beautification efforts but also provides “a place with dignity” for the homeless, Williams said.

“They, too, as homeless individuals get frustrated when things are dilapidated or not picked up. They live here, too.”

The modest retirement account belonging to Samantha Velez’s family has been reset to zero.