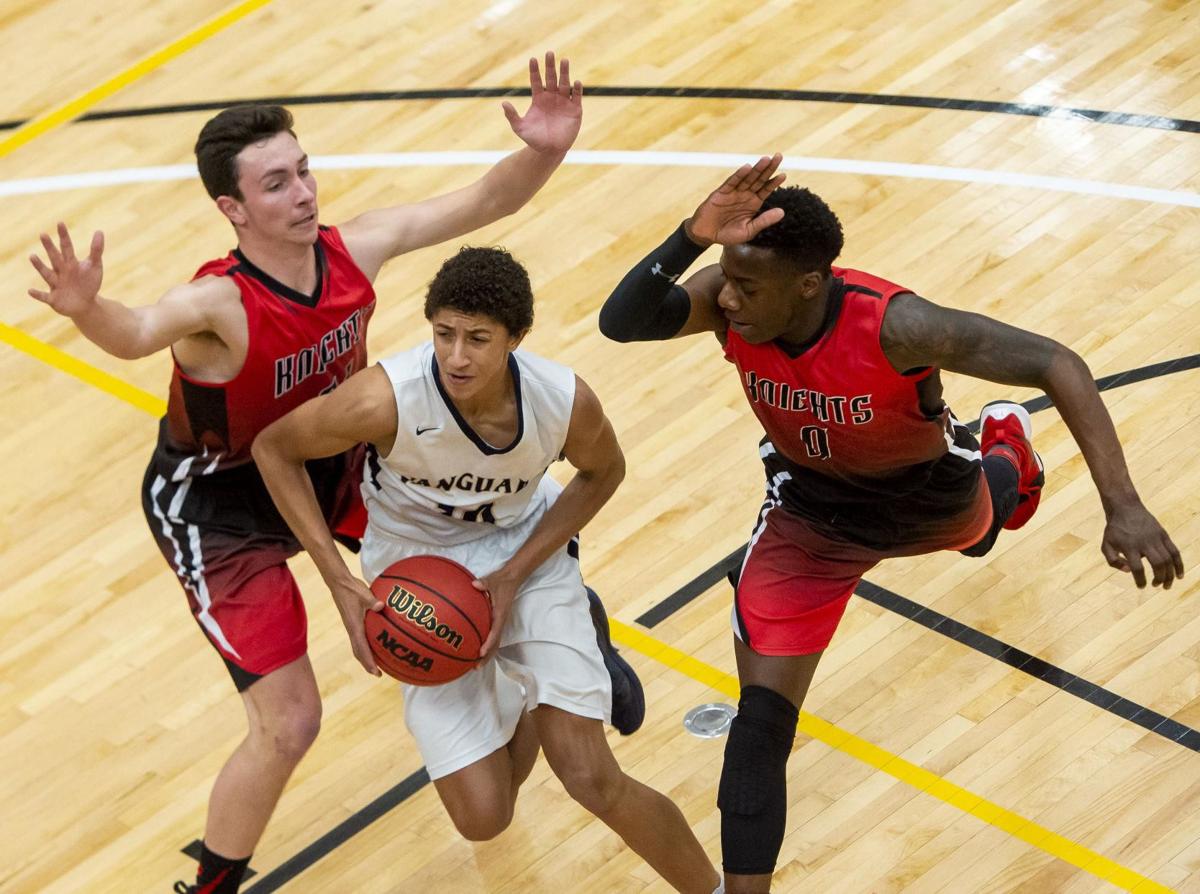 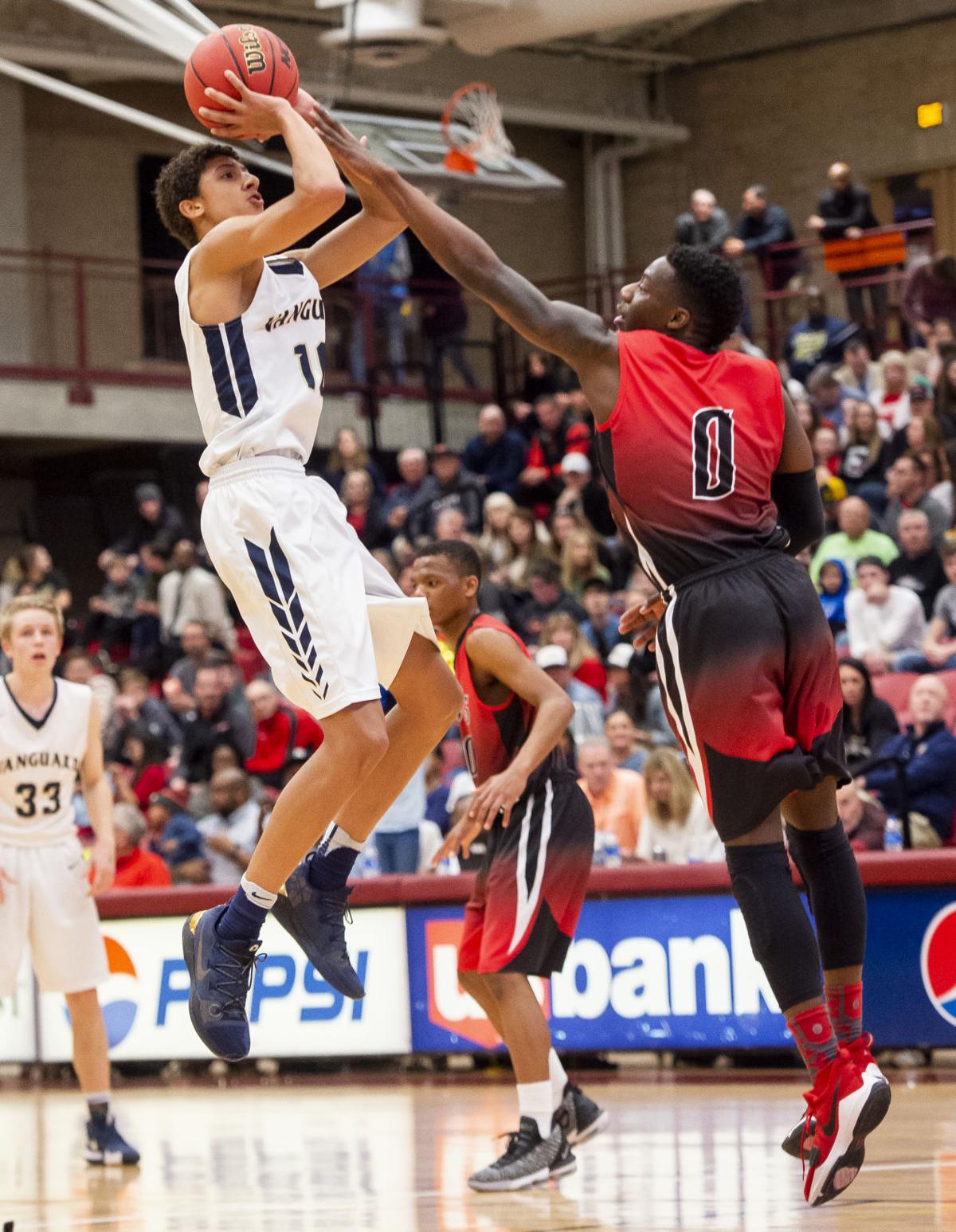 The Vanguard School junior Dominique Clifford shoots the basket against DSST: Stapleton in the 3A state boys’ semifinals game at Hamilton Gym at the University of Denver on March 8, 2019, in Denver.

The Vanguard School junior Dominique Clifford shoots the basket against DSST: Stapleton in the 3A state boys’ semifinals game at Hamilton Gym at the University of Denver on March 8, 2019, in Denver.

Size was the uncontrollable. For young athletes, it often is. But the foundation for Dominique Clifford was in place for years. He's been ready for this.

The Vanguard School's bouncy senior lead guard — the most promising high school basketball prospect I've seen in Colorado since Josh Scott in 2012 — was ready for his sudden, eruptive recruitment. The frenzied process began with interest from MSU Denver, a top-flight Division II program, and closed with Clifford signing a letter of intent with CU-Boulder of the prestigious PAC-12.

He was ready with a resume — an actual resume, complete with letterhead — that he emailed to college coaching staffs from the Big 12 to the Big Sky. The resume included his GPA (3.5, taking honors classes), a cover letter thanking coaches for their interest, even personal references with contact info attached.

Your boy sent a *resume*, one high-major assistant coach texted me. That’s a first.

Nique — his friends call him Nique, and everyone's his friend — was ready for the "Over-rated!" chants that poured down from the Northfield High student section in a game last week. With Buffs coach Tad Boyle wearing a huge smile in the top row of the bleachers, Clifford calmly made two free throws with 20 seconds left to seal the Coursers’ upset win.

“What was cool about that game,” said Clifford, who had 32 points, 15 rebounds, eight assists and one ferocious dunk, "was how we didn’t dwell on our mistakes. I was proud of us for that.”

Nique is the next big thing from Colorado Springs, and he was ready for this.

Just needed a little growth spurt to make it official.

Vanguard (6-1) plays at St. Mary’s (8-1) in a juicy one on Tuesday, and I hope for its sake St. Mary’s is ready for this: Clifford leads the state in scoring at 28.7 points per game. He’s good for one jaw-dropper per game, too, like the blocked shot at Northfield when he emerged from the weak side to pin the ball at the top of the white square. At that, Boyle smiled again.

Vanguard coach Joe Wetters figured Clifford might be a good one when Clifford was dominating his third-grade PE classes, all while involving every girl and boy he teamed with.

Yes, 5-foot-7. Mom (Angel, who’s 5-7) and Dad (Akai, 6-5, a former standout at Widefield) got him ready for real life with volunteer gigs at a local hospital and summer jobs painting walls and dumping trash at Vanguard. But it took some good fortune and better genes to add the size high-major basketball usually requires.

Nique grew 5-6 inches over the summer between his sophomore and junior years, he said. These days he’s all of 6-5 and an angular 170 pounds, buoyed by the fact he will munch anything remotely edible — except cucumbers and pickles. That kind of growth spurt lends to a quick turnover of shoes (he went through 15 pair of sneakers in a single year) and clothes that fit his long, lanky frame (Grandma Clifford discovered “American Tall,” an online store, and zeroed in on pants with 34 waists and 38 lengths). Nique outgrew his wardrobe so suddenly Mom had him wearing black socks with black pants to hide the fact his pants didn’t reach down to his sneakers.

“It was unbelievable,” Angel Clifford said. “He just kept growing straight up.”

Is he done yet?

“The doctor says my growth plates are still open,” Nique said. “So who knows?”

He was ready for the growth spurt, as the guard skills he always leaned on remained intact.

“Nique has no ceiling. His potential is limitless. He can be as good as he wants to be,” said Randy Perkins, who coached Clifford in the Colorado Miners club program.

The Cliffords were only kind of ready for the “overwhelming” recruiting process, in his mom’s words. Who could be? College recruiters called "every day" after his performance in leading Vanguard to the Class 3A state championship game, she said. It was at DU’s Hamilton Gym where I asked Nique if he’s ready for what's next: a rush of college recruiters.

“That's a dream to play in college.”

Soon after, at least one recruiter attended Clifford’s open gyms “from April through August,” Wetters said. The family lunched with a Division II women’s soccer player and a Division I football player — both from the Springs — to gather tips on the recruiting process. Angel and Akai left the final decision to their son, whose list of scholarship offers included Stanford, Air Force, Colorado State, Northern Colorado, Wyoming, Washington State and MSU Denver, the first staff to inquire and a family favorite.

“I liked the staff at CU and the vision they had for me,” Clifford said. “And playing in March Madness has been a dream for me. They gave me the best opportunity to do that, especially with the players I’ll have there with me.”

One of those is Sand Creek graduate D’Shawn Schwartz, who followed Lewis-Palmer’s Scott and Sierra's Wesley Gordon as Springs-products-turned-Buffs. Schwartz and Clifford will get one season together in Boulder, a proper handoff for CU hoops' most valuable pipeline.

"Pretty excited to have another Springs guy up here," said Schwartz, who has mentored Clifford on what to expect in their shared major, business. "I'll help him out however I can."

Colorado guys stick together, and Nique will be ready. Always has been. He just had to grow into his role as Colorado's star prospect.

Cheyenne Mountain's Javonte Johnson and The Vanguard School's Nique Clifford followed the "On Top Next" mantra to scholarship offers from a handful of Division I programs.