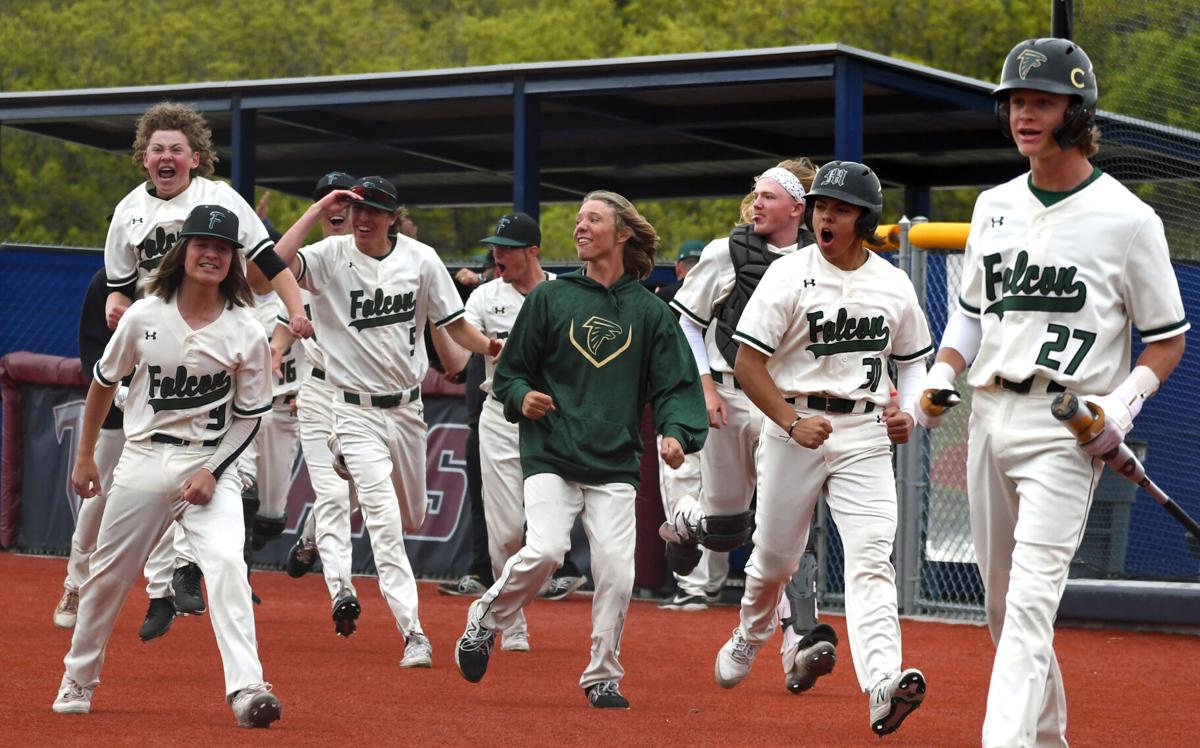 The Falcon bench runs to home plate in celebration of a three-run home run hit by Nolan Adamski during a 4A/3A CSML North doubleheader against TCA. The Falcons won 5-3, 5-5 to remain undeafeated. (Lindsey Smith, The Gazette) 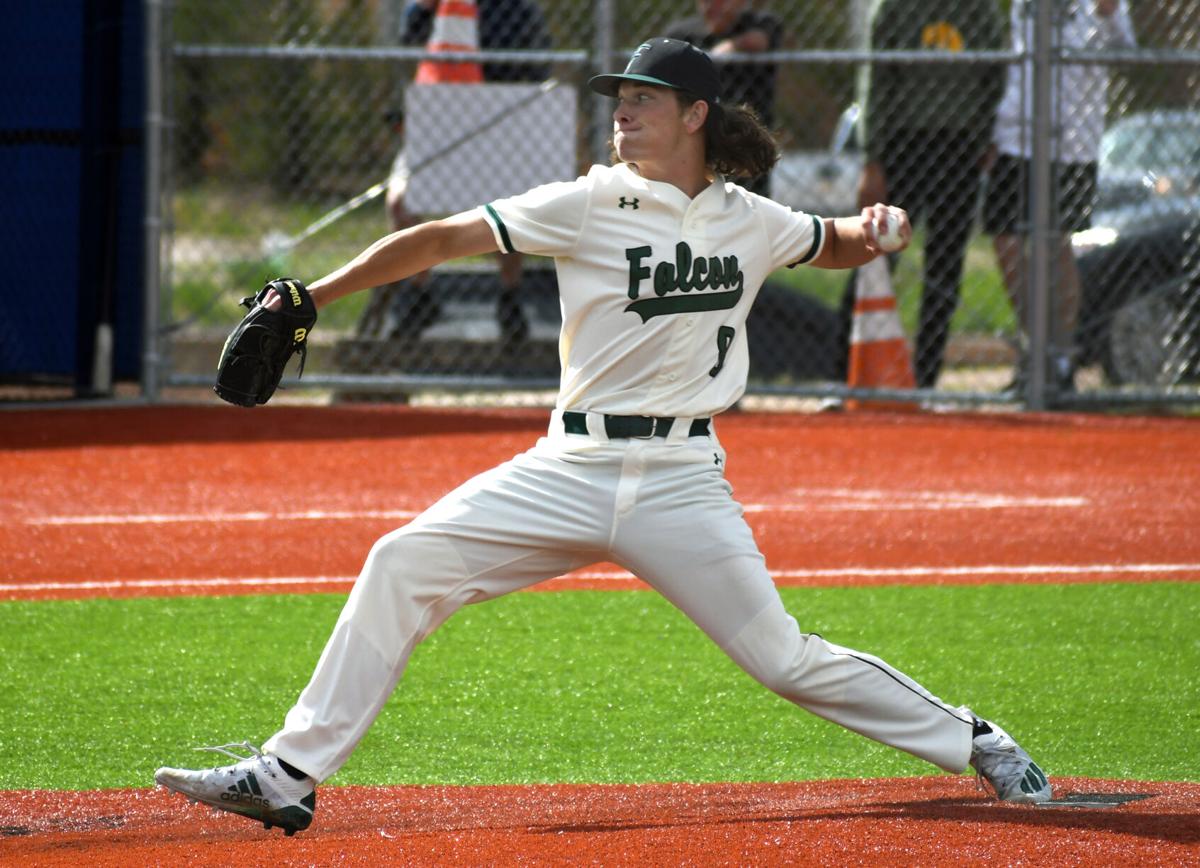 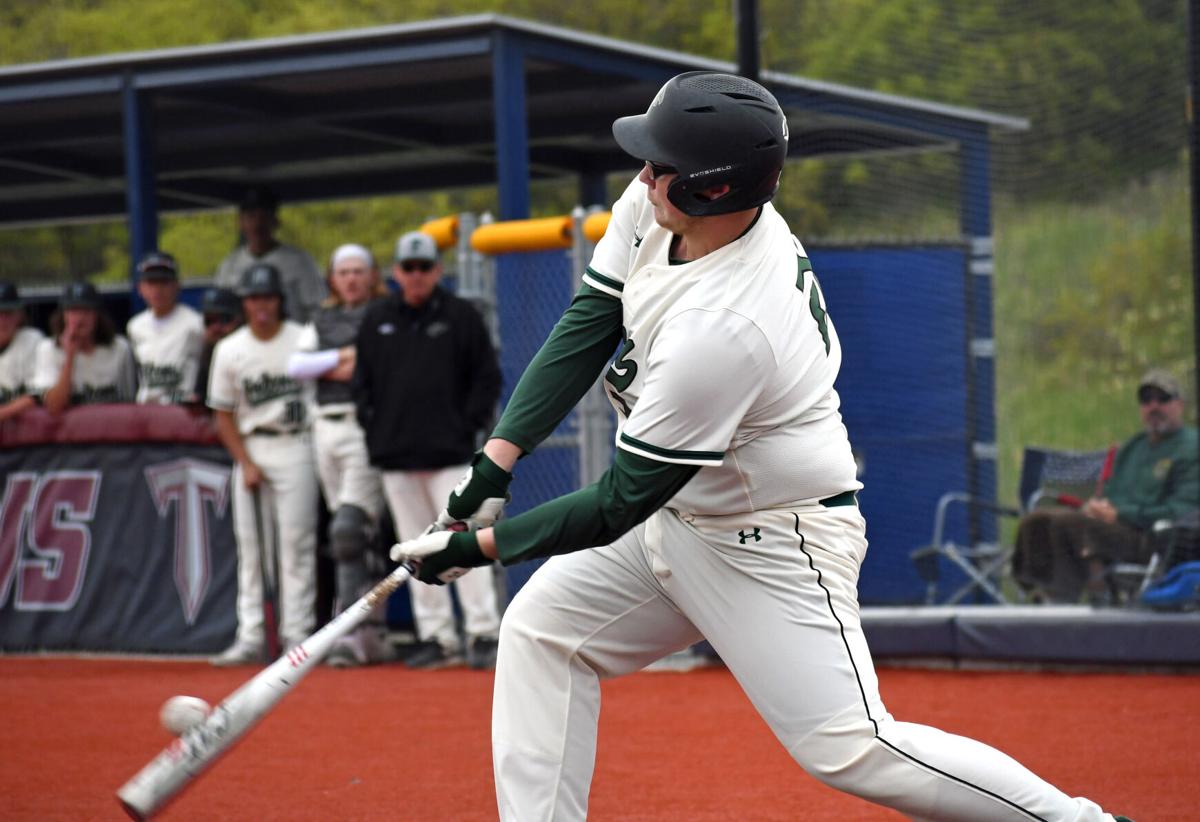 Nolan Adamski hits a three-run home run during Game 1 of a 4A/3A CSML North doubleheader against TCA on Tuesday. The Falcons won 5-3, 5-5 to remain undeafeated. (Lindsey Smith, The Gazette) 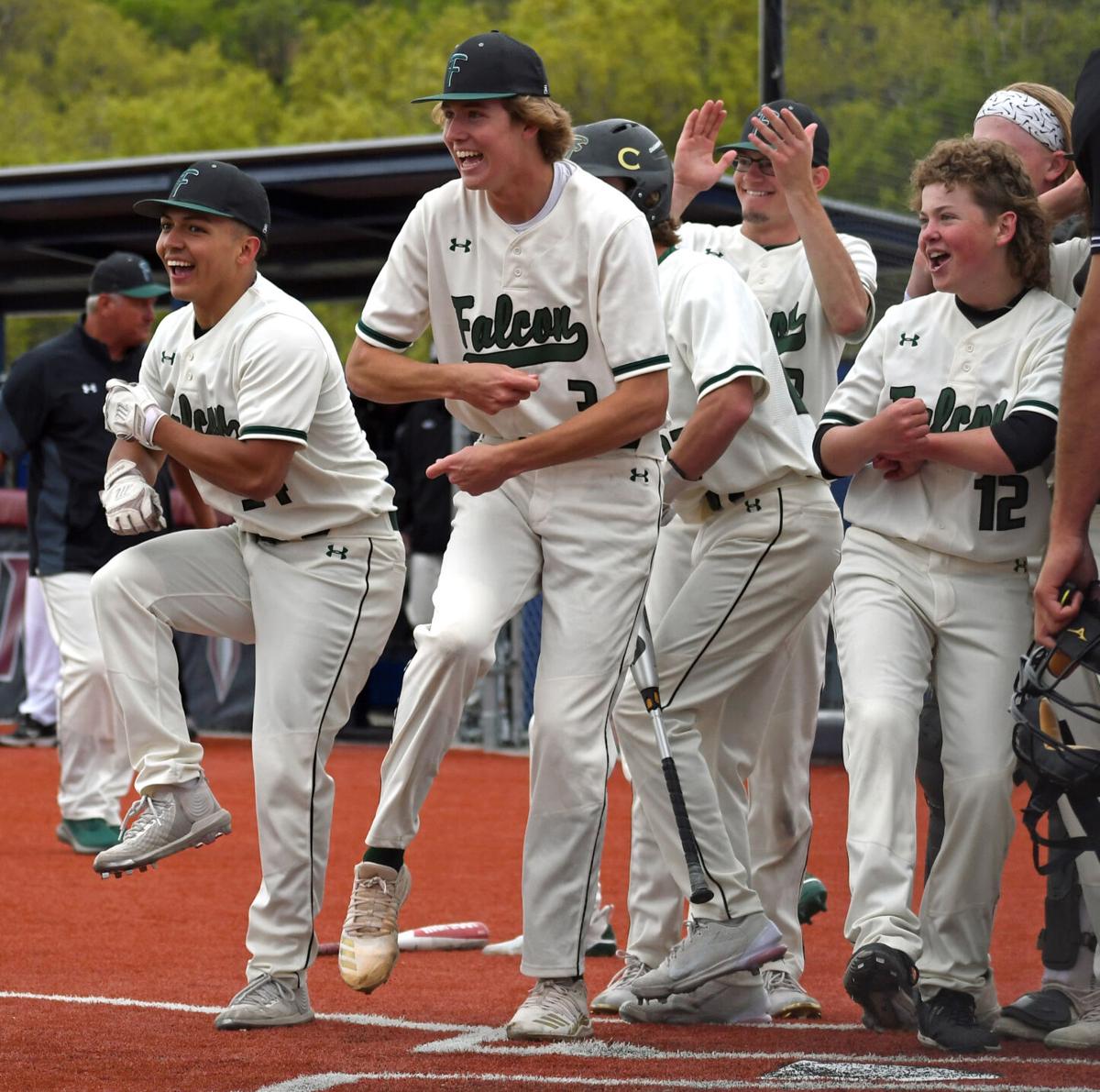 The Falcon bench runs to home plate in celebration of a three-run home run hit by Nolan Adamski during a 4A/3A CSML North doubleheader against TCA. The Falcons won 5-3, 5-5 to remain undeafeated. (Lindsey Smith, The Gazette)

Nolan Adamski hits a three-run home run during Game 1 of a 4A/3A CSML North doubleheader against TCA on Tuesday. The Falcons won 5-3, 5-5 to remain undeafeated. (Lindsey Smith, The Gazette)

Gaven Schmidt hit a two-run triple while Zach Howe and Zach McCullouch had an RBI each in Game 2. McCullouch also had two hits and an RBI in Game 1, and Clayton Sanger struck out 15 of 26 batters faced in his six-inning outing in the opener.

Josh Dunn, Teller Wilson and Cameron Brickler had an RBI each for TCA in Game 1, and Wilson pitched 5.1 innings and struck out seven. Brickler had two hits in Game 2.

At Fowler: Nine Panthers earned an RBI in a nonconference win over Fowler.

AJ Lashley led Peyton with two hits and three RBIs. Brennen Meyers and Brenton Battista had two RBIs each. Evan Neumaier and Bryce Gregg had two hits and an RBI each.

At Doherty: Kyle Neefe was a double away from hitting for the cycle to lead Liberty to a 4A Pikes Peak win over the Spartans.

Neefe finished with three RBIs, with Cody Read and Anthony Jay following with two each. Zach Cody pitched a complete game, racking up 12 strikeouts and allowing just three hits and one walk.

At Discovery Canyon: Discovery Canyon claimed a 4A Pikes Peak win in walk-off fashion, scoring four runs in the bottom of the seventh after Pine Creek came from behind to claim the lead with seven runs through the fifth and sixth innings.

Cameron Whittle led the Thunder with two hits and three RBIs. Hunter Lindell and Austin Weller had two RBIs each.

Pine Creek was led by senior Dalton Scruggs who had two extra-base hits and three RBIs. Nick Sapp and Bobby Millhauser had two RBIs each.

At Rampart: Brayton Wilmes, Luke Weir and Josh Mills each had an RBI in the top of the sixth as Palmer Ridge defeated Rampart in a nonconference win.

Weir, Tate Gargasz and Christian Palmer had two hits each, and Mills struck out five in five innings. Bryce Glenn pitched two innings for the Bears and struck out two batters.

At Air Academy: A three-run fourth inning lifted Cheyenne Mountain to a 4A Pikes Peak win over Air Academy as Hays Chaney and Denton Damgaard each hit home runs for Cheyenne.

Anibal Rivera and Elliot Rodriguez had two RBIs each and Casey Thibault struck out six batters in a complete-game effort for the Trojans.

At Palmer: Tyler Becker hit a bases-clearing double to lead Widefield with four RBIs as the Gladiators completed a 4A/5A CSML South sweep of Palmer.

Joseph Swenson and Ben Prantl had two RBIs each for the Glads and sophomore Zach Ronspriez struck out five batters in four innings. Freshman Jilian Medina pitched one inning of relief and struck out two of four batters faced.

At Rampart: Elizabeth Bancroft and Delaney Geiersbach had four goals each and Brianna Jennings scored three goals to lead Rampart to a nonconference win over Palmer.

At Air Academy: ThunderRidge took a 12-1 lead over the Kadets in the first half of a battle for the lead in the 5A South conference before handing the Kadets their first loss of the season.

Erica Sherwin, Julia Mayne and Sophie Mckeown each scored and Mayne also had an assist. Caroline Maestas had nine saves to complete the shutout.

At St. Mary’s: Kacey Barta and Maggie Lappe both scored a hat trick and had two assists in a dominant 3A Tri-Peaks performance over Atlas Prep.

At Woodland Park: Woodland Park won its sixth straight game and third shutout of the year in a nonconference win over James Irwin.

Morgan Berry and Shea Waters had two goals each for the Panthers. Isabella Slocum and Chloe Robinson split time in goal with five combined saves.

At Sand Creek: TCA took a 3-0 lead over Sand Creek in the first half of a 4A CSML North win.

Ryan Hansen led the Jaguars with 12 kills followed by Josh Livergood with 11. Ryan Longamore smacked down seven kills while Hansen and Luke Ferrante had three aces each.

At Pueblo South: Mesa Ridge won the opening set in a nonconference match against Pueblo South 25-22 before the Colts took a 2-1 lead, winning the next two sets 25-16, 25-13. The Grizzlies battled back in the fourth to win 25-23 and force a fifth set before Pueblo South clinched a 15-9 win in the final frame.