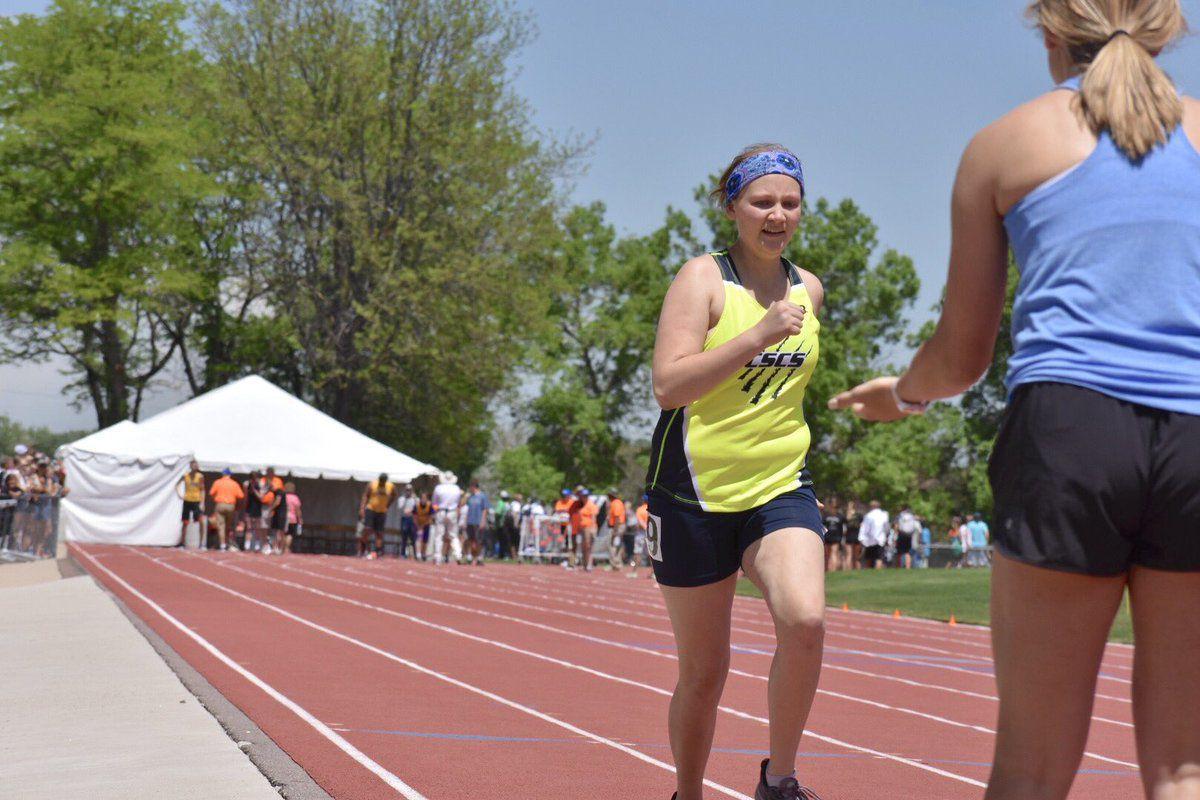 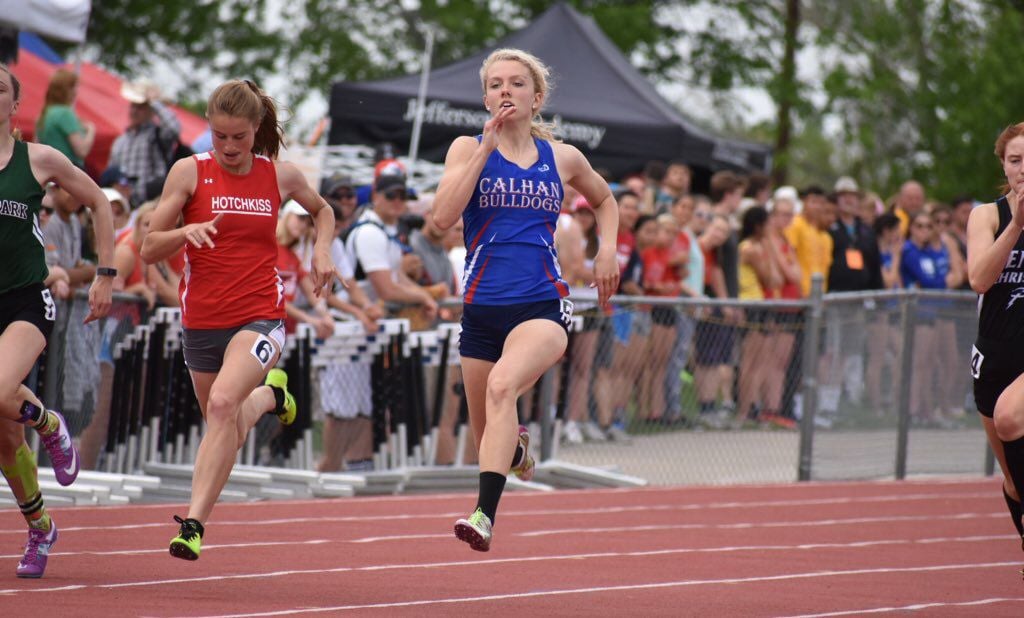 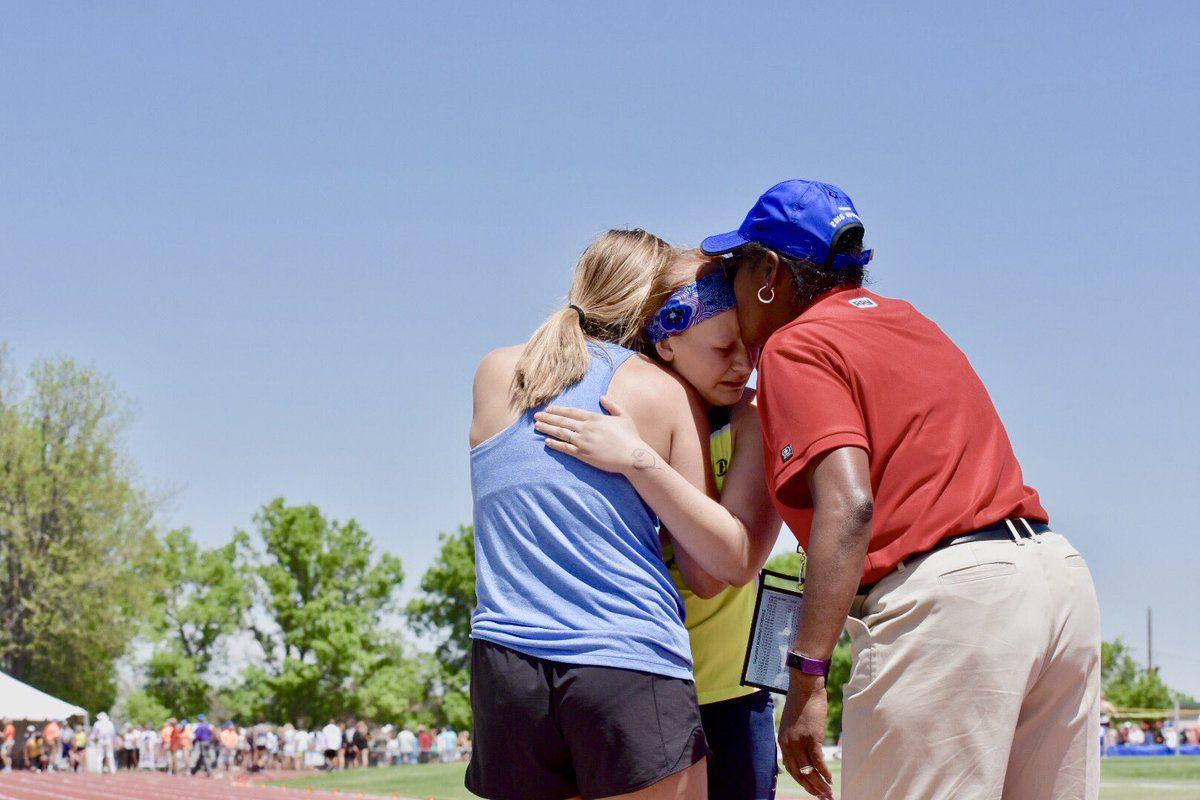 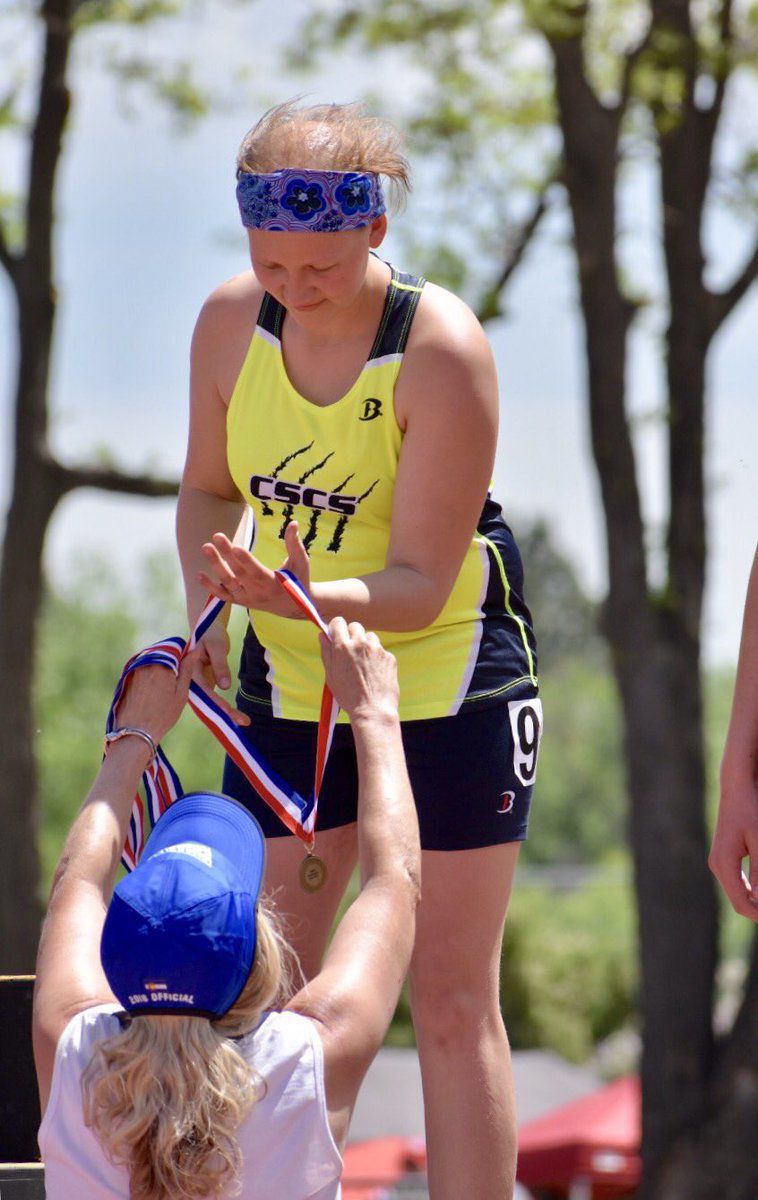 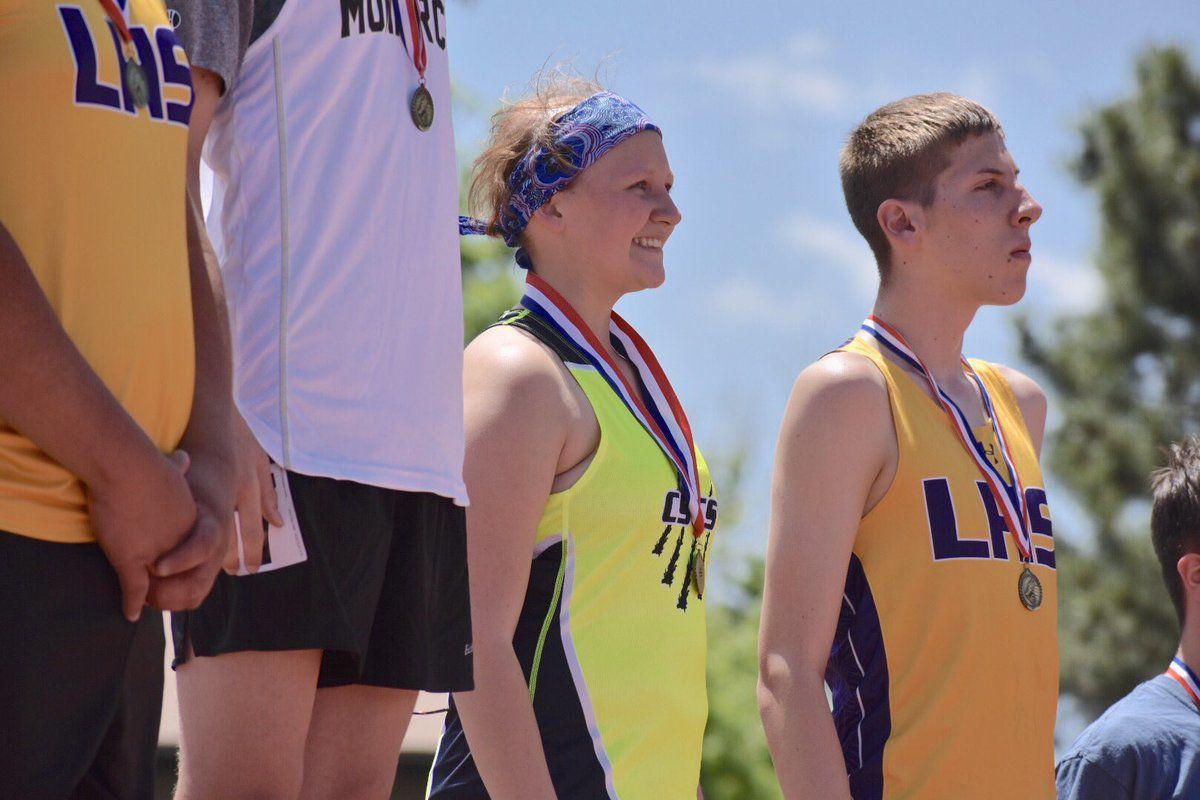 LAKEWOOD - Sophomore Hannah Skrastins had always loved competing in sports. But in 2014, she found out that her athletic aspirations may be cut short thanks to a tumor the size of a tennis ball that had to be removed from her brain.

But a nine-hour surgery to remove the tumor, and months of chemotherapy and radiation hasn’t stopped Skrastins from getting back out on the track.

Skrastins competed in the Paralympic/Unified athletes 100-meter dash on Thursday in the first of two races she will run at the 2018 Colorado State Championships.

After the starting gun sounded, Skrastins made her way down the track, and fell into her sister Abby’s arms after completing the race in 20.90 seconds.

“I think this gets the nerves out,” Hannah said. “I go to Colorado Springs School for the Deaf and Blind, and they have a small 200-meter track and I run around that after school, usually.”

Hannah said the 100 is her favorite event, and she just started running the 200 this year. She also said she competed in the long jump in middle school before her surgery.

“It was really awesome, she was really nervous beforehand so it was really cool to see her get out there and run as hard as she can, I was very proud of her,” Abby said.

Hannah will compete in the 200 Friday, for a chance at her second trip up on the state championship podium.

“It was pretty cool,” Hannah said.

Brittany Fuchs did what many freshman only dream of. She reached the top of the state track & field podium as a freshman.

For the senior, bound for UCCS, 2018 is her last chance for state gold after falling just shy two years in a row.

“It’s been a motivator since I haven’t been to the top again, but hopefully this year I make it,” Fuchs said.

Fuchs has been noted by area coaches as a small-school sprinter, but runs at a high level at big meets.

“It’s hard coming from a smaller school because there aren’t a lot of people with my speed, so I try to train with the guys,” Fuchs said. “They are closer to my speed and they help push me to lengths I haven’t gone before.”

Fuchs will run in the 2A 100 finals on Saturday morning, and compete in the 200 later that afternoon.

Was it part of the plan to finish 1-2 in the Class 4A boys triple jump?

“It was, actually,” Vista Ridge senior Raymon Harper said. “We kinda talked about doing it, at least trying to do it.”

With one twist: the favorite probably was Micah Hilts, who had the longest jump of the 4A season heading into the state meet. No matter. When the Vista Ridge duo stood atop the medal stand, it was Harper with the gold (after a jump of 46-10) and Hilts with the silver (46-1).

Both made a quick shout-out to teammate Brianne Watkins, who also made the state finals in the triple jump, placing 14th on the girls side.

“It’s really good to train with the three of us together,” said Hilts, a junior.

“It’s about trusting the process and trusting the coaches,” Harper said. “They know what they’re doing and it showed today.”

Last year at state, he set a school record. Earlier this year, he won a national indoor title.

He's already two medals deep: first in the high jump (6-8) and third in the long jump (22-7). He starts at Texas Tech this summer. After that?

“Olympics has been there for a while,” Hogan said. “Hopefully someday I can get up there.”

He forced his way to the medal stand at Jeffco Stadium. And Maccee Reed’s track career isn’t over yet. The Palmer Ridge senior, a triple-jump expert, finished seventh in the boys event at state. In a few months he’ll drive north to join the University of Northern Colorado’s squad.

“Crazy and sad it’s over,” Reed said. “But I guess it means I’m on to bigger and better things.”

Sweat had never before cleared more than 8-4 in a meet.

“Next year I’m looking for first with a vault above 10 feet, hopefully,” Sweat said.

Last week, Sweat vaulted 8-4 for the first time. A week later, she soared a foot higher.

“I had more adrenaline today and was more ready,” she said. “I was ready to take it on.”

Sweat cleared 9-7 on her second vault, but came down on the bar.

The state track and field meet is, of course, all about competition.

The competition begins early at Jeffco Stadium. Really early. Teams seek to pitch the first shade tent. The east side of the stadium is the best spot to find shade from the afternoon sun, so the east side inspires the best competition.

The Classical Academy coaches arrived at 6 a.m. Friday, believing they would be the first team to pitch a tent.

The Titans were second.

Not much is predictable about the state track and field meet. Well, except one thing.

CHSAA officials said that lightning will stop track events, but runners will still compete in rain, unless the rain is extremely heavy. Heavy winds could delay field events, especially the pole vault.

The forecast for Friday is decent, with a 50 percent chance of afternoon showers as of Thursday evening.

Saturday’s forecast is more grim, with an 80 percent chance of rain.

The Classical Academy boys’ track and field team had a big goal in mind entering the 2018 state championships - a title repeat.

And after Day 1, the Titans are in good shape thanks in part to three top finishes in the boys’ 3,200.

Led by senior Ryan Moen, TCA swept the top two spots, as Moen raced against teammate Mason Norman to cross the line in 9:38.97. Norman followed in second with a time of 9:41.28, followed by Canaan Lamberth in eighth (10:02.13).

Heading into the second day of competition TCA is second, one point behind Bayfield.

“I knew it was going to be a good race, I know almost all of these guys as personal friends so I was really looking forward to racing against them one last time,” Moen said after his state gold. “I knew that I shouldn’t take over the race too early, so I was just sitting, and had Mason there to run with me and Canaan was there to push the pace for us too.”

Moen made his move on the back 100 of the second to last lap to pass Norman, and continued to put space between.

“Mason, Canaan and I train all the time and we take turns taking the lead in workouts,” Moen said, “and last year training with Tanner (Norman, Mason’s older brother and a 3A state record holder)  was really hard because he was always a mile ahead of us, I swear. So we’re always running together and trying to push each other.”

“Mason and I went for a cool down, took an ice bath, and I tried to fall asleep and try to get the nerves out of my mind (before the 3,200),” Moen said. “Last year I had a bad race here and I think it was because of my nerves, so I really tried to relax today, and I’ve been goofing around to shake off the nerves. I think that’s how I race best.”