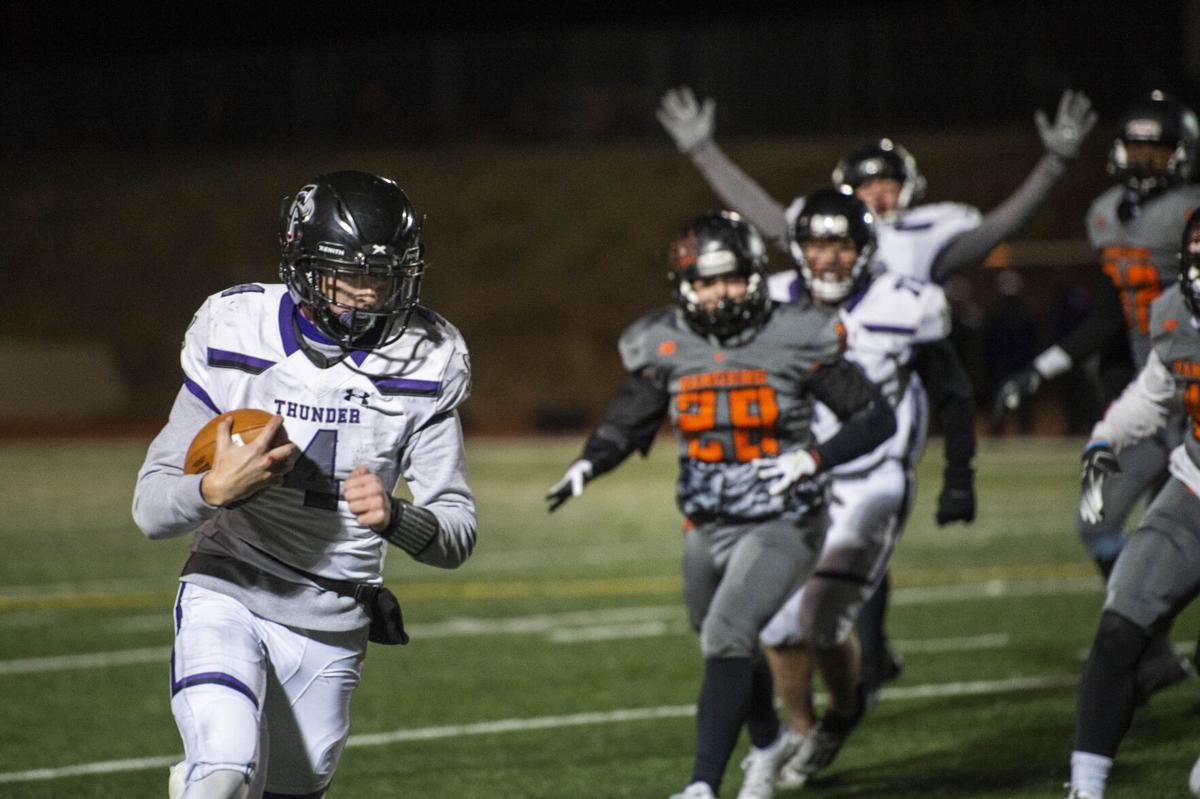 Discovery Canyon quarterback Trevin Alessio runs for a first down during the second half of Friday’s game at Don Breese Stadium. 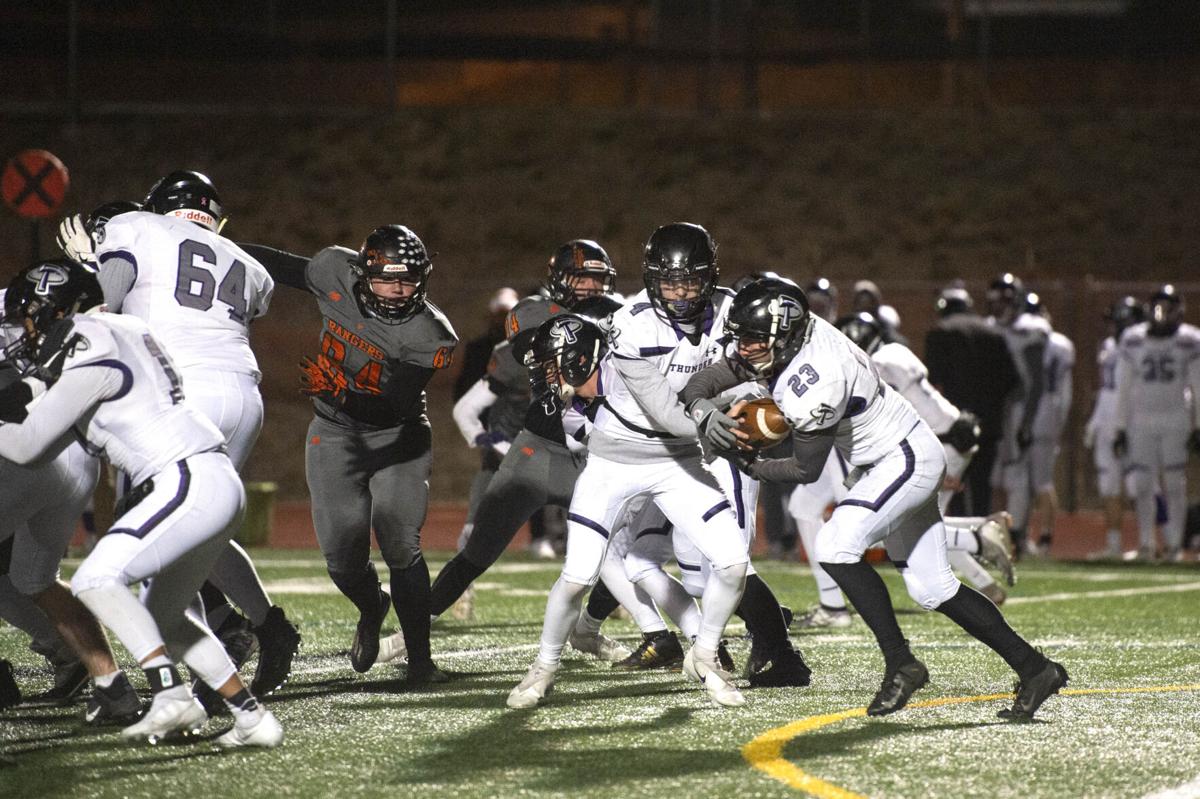 Discovery Canyon quarterback Trevin Alessio hands off to fullback Dylan Ruane in the first half of Friday's game against Lewis-Palmer at Don Breese Stadium. (Photo by Vinny Benedetto) 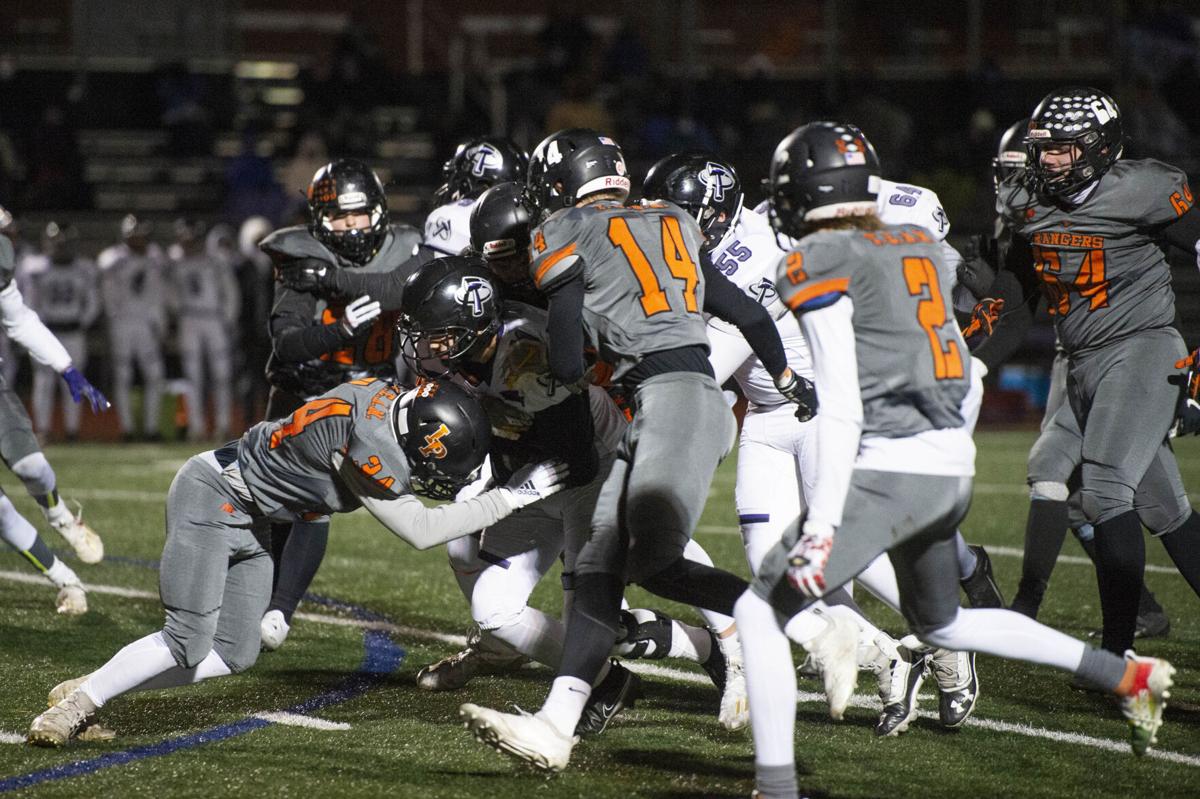 Discovery Canyon quarterback Trevin Alessio runs for a first down during the second half of Friday’s game at Don Breese Stadium.

Discovery Canyon quarterback Trevin Alessio hands off to fullback Dylan Ruane in the first half of Friday's game against Lewis-Palmer at Don Breese Stadium. (Photo by Vinny Benedetto)

MONUMENT  - Dylan Ruane, Ayden Emmons and Trevin Alessio scored the touchdowns for Discovery Canyon in its 23-7 win over Lewis-Palmer on Friday at Don Breese Stadium, but the credit went elsewhere after the game.

“They were amazing,” Alessio, the Thunder’s sophomore starting quarterback said of his offensive line. “They stepped up big time this game.”

With Discovery Canyon’s option attack squaring off against the Rangers’ run-heavy approach from the I formation, the game clock moved quickly and the end result largely came down to line play. The Thunder’s offensive line received praise from coaches and players alike after the makeshift unit paved the way for three touchdowns.

With rosters limited to 50 players this season as part of the coronavirus protocols, the Thunder had to move players from positions with more depth to bolster the line. Drew Keegan, formerly a fullback like Ruane, and Nathan Proft, a reserve for most of his prep football career, are prime examples.

“A bunch of guys got injured, and they’re like ‘Hey, just throw him in,’ and he really showed out,” Ruane said of Keegan before moving down the line. “Nathan Proft, that’s the true definition of grit and grind because … he’s played since freshman year, and he hasn’t started until now. He really showed that no matter how hard it gets, he’s willing to be the next man up. I’m really proud of him. I got to buy him a steak or something.”

Ruane got the game’s first touchdown on a short fullback dive. The line opened up a hole and Ruane willed his way past an opponent trying to plug it.

“I just kind of tucked my shoulders and ran right into him,” the senior said. “It’s whoever’s tougher at the end of the day.”

Emmons scored the second for a 14-0 lead at halftime and Alessio scored on a fourth-down keeper to make it 20-0 in the third.

Jake Knisley’s tough running between the tackles accounted for most of the Rangers’ offense until quarterback Chris Mills hit Eddie Speller Jr. deep over the middle for a 75-yard touchdown on the first play of the Rangers’ drive after Alessio’s touchdown. The long pass play was the game’s only completion for either team.

“That is a tough brand of football, and they play it tough,” Mitchell said of Dustin Tupper’s Ranger offense.

Connor Clancy capped the scoring, and possibly the Thunder’s season with a short field goal. Discovery Canyon is not expecting a playoff spot after a 4-2 regular season, but the Thunder are hoping to schedule a seventh game even if that means more roster shuffling.

“We’re taking guys and we’re moving them around. It’s a stressor in a regular year. It’s even more stressful now,” Mitchell said.

“We’ve been working on getting a game scheduled, and we thought we had one. That got pulled. … It’s been this back and forth, so hopefully somebody, somewhere is going to be looking for a game.”

FOUNTAIN - Lined up against Rampart for the second time in eight days, the Fountain-Fort Carson Trojans had just one thing on their minds: Red…