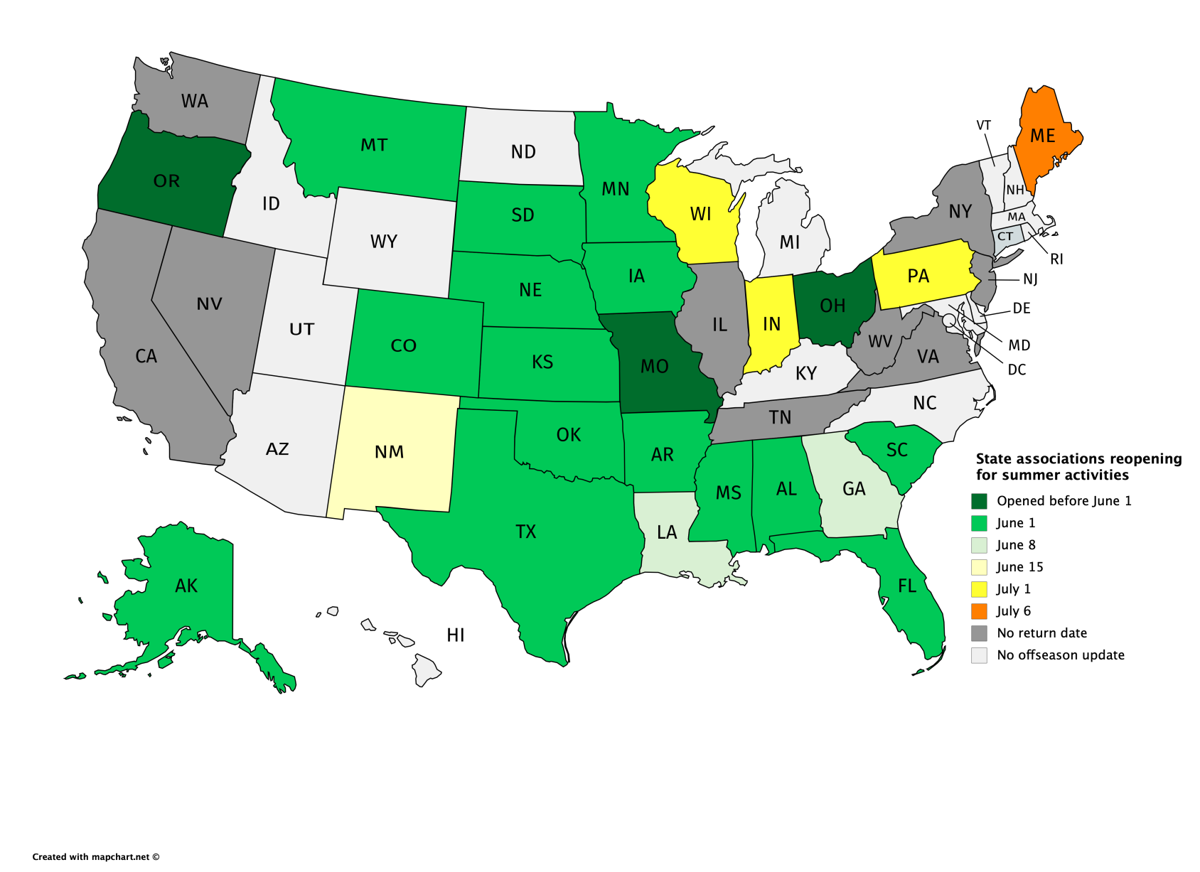 A timeline illustrating the changes and regulations resulting from the COVID-19 pandemic in Alabama, Colorado and Pennsylvania. (Illustration by Lizi Arbogast)

Throughout the coronavirus pandemic, countless people, businesses and organizations have been affected. Lives have changed, likely forever.

The sports world wasn’t spared as everything from professional, college, high school and even international sports were shut down in a response to COVID-19.

The result was an entire country with nearly no high school sports. Within weeks, all 50 states had canceled the spring season — some before it even started. And now, more than two months into the pandemic, the focus has shifted to when and how fall sports will return.

High school athletes, coaches and fans around the country are itching to get back to the games they love, and some are getting that wish sooner than expected.

Every state throughout the U.S. has different protocols as to how each is reopening its economy, and in most cases, athletic associations have followed suit. This is an in-depth look at how three states, which span the country and the playing field of reopening, compare in the world of sports.

The Rush to Reopen: Our take on state associations reactions and reopening plans

How did we get here?

Lindsey Smith, Colorado Springs Gazette: In a 24-hour period between March 11 and 12 the Colorado High School Activities Association released five updates regarding the state basketball tournaments and spring sports in response to COVID-19. CHSAA first limited state basketball spectators to “essential team personnel only,” then later revised the decision to allow athletes to invite up to four guests each. CHSAA announced a three-week postponement of spring sports March 12 while state basketball games were in progress. At 11 p.m. March 12, some 10 hours before state semifinal games were set to tip off, CHSAA canceled the remainder of the tournament as host sites announced their closure in response to Denver’s state of emergency declaration.

Jake Adams, The Carlisle Sentinel (Pennsylvania): We knew things were going downhill in Pennsylvania when Mount Lebanon refused to play its state basketball second-round game when a parent at the school they would play, Cheltenham, was exposed to a person suspected COVID-19 positive. There was a sense by some that would be the last night of games. Within 18 hours, Wednesday’s second-round games wrapped up, the Pennsylvania Interscholastic Athletic Association shut everything down for two weeks. The announcement came noon March 12. Class 3A swimming championships were going on, and they were forced to stop after the timed trials. The 2A teams were arriving that morning and were pulled into an impromptu meeting and told they would not be competing that week and needed to head back home. The only spring sport that got in any competition prior to the shutdown was boys' tennis, which began March 9. The other spring sports weren’t scheduled to open the season for another week.

Lizi Arbogast, Tallapoosa Publishers Inc. (Alabama): With things starting to escalate around the country and the cancellation of major sporting events, the Alabama High School Athletic Association remained quiet. But when Alabama Gov. Kay Ivey announced the shutdown of schools beginning March 19, athletics had to follow suit. The announcement was made March 13 and it included a suspension of all athletic events at the end of the day Tuesday, March 17. This affected only spring sports as in Alabama — unlike Colorado and Pennsylvania — winter sports had already wrapped their championships by the end of February. After the decision, many spring teams began quickly attempting to reschedule area games, which are the only ones that count toward playoffs in Alabama, and worked to have final contests for their teams while other school systems shut down their teams right away.

When did things officially shut down?

Smith: In mid-April, many Colorado school districts canceled in-person classes and athletics, especially in the Denver area, where most postseason tournaments are held. While CHSAA said district decisions did not change the state association’s suspension on spring sports, which at that point remained in effect until April 30, it would have created a scheduling nightmare had CHSAA been able to continue the season. After its initial decision to suspend spring sports March 12, CHSAA extended its spring sports suspension twice before officially announcing the cancellation April 21. The decision followed Colorado Gov. Jared Polis’ announcement to cancel in-person instruction for the remainder of the school year. At the time of the cancellation most sports would have been in the final weeks of the regular season, and some sports, such as tennis and golf, would have been days away from their scheduled playoff period.

Adams: The PIAA officially canceled all remaining winter championships and the entire spring season nearly one month to the date after everything was postponed. It’s tough to say it wasn’t unexpected, even though there were many players and parents who were outraged and felt there could be a season into the late summer. The PIAA tied itself in with Pennsylvania Gov. Tom Wolf’s mandates. Once Wolf said schools would be closed the rest of the academic year, that was the final nail. The PIAA held an emergency meeting and shut things down for good. The PIAA waited about as long as it could. No spring sport except a few boys' tennis teams competed.

Arbogast: Again, the AHSAA waited for the guidance of the governor and the Alabama State Department of Education, but once the decision was made to move to online learning for the remainder of the 2019-20 school year, athletics followed suit, officially ending the season March 26. Because the AHSAA puts so much pressure on ensuring playoffs and championships are completed before school gets out — or as close as possible — there was no way to have even a plan for a shortened postseason. The decision was actually made by Alabama superintendent Dr. Eric Mackey, and the initial reaction was coaches weren’t exactly surprised but they were still shocked. “I’ve never seen anything like this year, and I hope I don’t again,” said Richy Brooks, who has been a baseball coach in Alabama for more than three decades.

What happened in between?

Smith: CHSAA announced a moratorium on coach and player contact regarding virtual practices and athletics until May 11, allowing coaches to contact players to check on only learning, well-being and mental health. From May 11 to June 1, coaches could conduct virtual workouts but could not schedule in-person team activities. CHSAA also announced a “resocialization” task force to examine what needs to be done to return to high school sports in the fall. The task force — comprised of medical professionals, CHSAA board of directors and select administrators from across the state — will meet throughout the summer to set recommendations and guidelines in returning to normal.

Adams: The PIAA never let on what its plans were during the month sports were on hold, providing updates fairly quickly only after the governor extended school closures every few weeks. It was clear the PIAA was going to attempt a return only if the state allowed it, and Wolf was cautious for a long time. Postseasons were originally scheduled to begin in early to mid-May, leaving precious little time to get in any sort of season once the PIAA finally ended the waiting game. Early in the pandemic, the PIAA barred teams from holding offseason workouts until July 1, with the understanding that date could change depending on the situation the state was in and what the government’s reopening policy looked like.

Arbogast: Finding a balance between battling the coronavirus but also wanting to get back to a sense of “normalcy,” which included high school athletics, the AHSAA worked diligently behind the scenes, setting up several contingency committees and making plans. Officials first made clear coaches were to have no face-to-face contact with athletes and students could not use on-campus facilities while schools were closed. Over the course of several weeks, several decisions were made. In Alabama, football teams are allowed a spring period and volleyball teams can host tryouts; however, as these were canceled, the AHSAA said it will allow for an extra week of official practice this season only. That means mandatory fall practice can begin July 27. Other announcements including summer competition, i.e. 7-on-7s, playdates, etc., would not be allowed this year and the annual North-South all-star week, which includes all-star games for nearly every AHSAA sport in Montgomery each summer, was canceled.

Where are we now?

Smith: Like many states across the nation, CHSAA has released the reopening responsibility to individual school districts starting June 1. CHSAA will not provide any administrative oversight until fall sports practices are set to begin in early August, but state association bylaws regarding equipment and camp limitations still apply. CHSAA also released a short set of guidelines for districts to consider in its reopening plan and encourages districts to follow local and state guidelines for reopening. Each district is encouraged to create its own “Return to Participate” plan to share with competitors, coaches and parents prior to reopening.

Adams: The PIAA has remained cautious and tight-lipped this entire time, and probably smartly as it doesn’t provide unnecessary hope or put itself in a position where it has to backtrack from previous statements. July 1 was the targeted return of offseason workouts, but that’s loose now after the board voted to allow schools that reach the green phase of the state’s reopening plan (the loosest of the three phases so far) to hold offseason workouts. Wolf announced a reopening plan several weeks ago that puts each county into one of three phases of reopening — red, yellow and green — with red the most restrictive of the three and green the least restrictive. All counties started in red, and counties that met certain requirements were moved to yellow in a few weeks. Some counties are set to reach green in early June. It has created a situation where some counties are further along the reopening timeline than others, largely because there are some very rural counties with little impact while others, like Philadelphia, have been hit rather hard by COVID-19. Some schools in counties that reach green may wind up returning before July 1, while others may be waiting for some time, particularly Philadelphia and surrounding counties. The PIAA would rather allow any schools that can return to do so (under Pennsylvania Department of Health guidelines) rather than force all schools to wait until the last school is allowed to return to action.

Arbogast: With more and more businesses starting to open up around Alabama, the AHSAA started to make more decisions about when it would restart athletic activities. Originally, it said it was likely June 8 would be the start date, but when the Alabama State Department of Education said schools could reopen June 1, the AHSAA once again followed those directives. Under a set of “best practices” guidelines, all athletic activity for grades seven through 12 can resume Monday. The guidelines include sanitation practices, social distancing protocols and more. They recommend people wear masks when 6-feet distances cannot be maintained, temperatures are taken before entry and all nonessential personnel not be allowed at workouts. These are simply “best practices” guidelines and it will be up to individual school districts to enforce them. Under AHSAA bylaws, all summer workouts are voluntary.

A state-by-state look at plans to resume high school sports while balancing health and safety measures amid the COVID-19 pandemic.