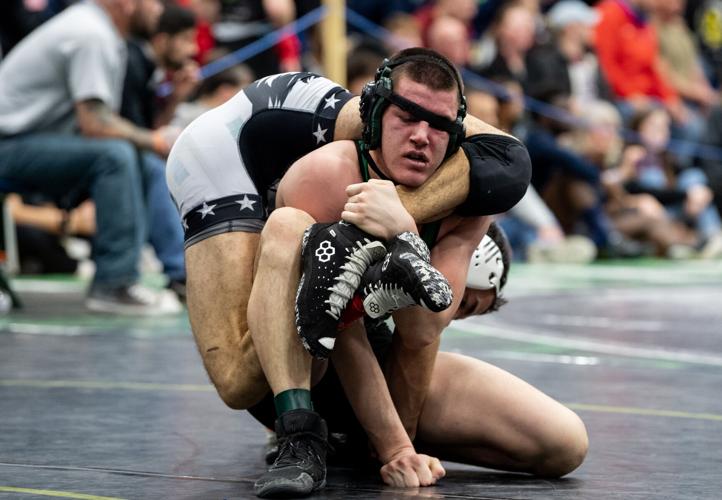 Dominick Cuccinelli tries to maneuver his way out of Pine Creek’s Treye Dashner in the semifinals of the Metro Wrestling Tournament at Doherty High School on Saturday, Jan. 21, 2023. (Parker Seibold, The Gazette) 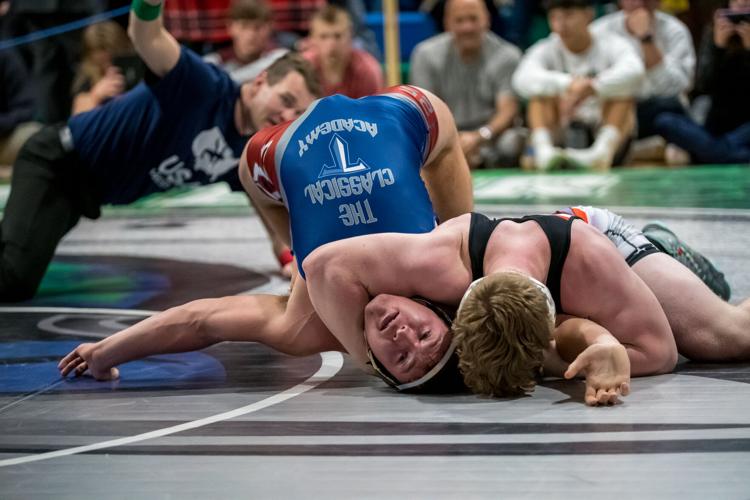 Dominick Cuccinelli tries to maneuver his way out of Pine Creek’s Treye Dashner in the semifinals of the Metro Wrestling Tournament at Doherty High School on Saturday, Jan. 21, 2023. (Parker Seibold, The Gazette)

The Colorado Springs Metro Wrestling Championships was a hectic scene.

Four mats and four matches played out most of the day Saturday in the main gymnasium at Doherty High School.

Fans packed the bleachers cheering for their respective wrestlers, imploring their loved ones to “get up” or "climb the body," or yelling "twoooooooo" for each takedown which awards a pair of points.

Wrestlers from 28 different area schools sparred or jogged past the lockers of Doherty, or caught up with friends in anticipation of their next match. In the end, the Eagles from Pine Creek reigned supreme, claiming their eighth team title at Metros and setting a new record for points at 322.

It makes sense given every one of the 14 Pine Creek wrestlers placed - got 8th or higher - in the tournament.

"They're good kids first of all with good parents but this group, they're hard workers," Eagles coach Billy Gabel said. "They committed pretty hard over the last couple years, a lot of offseason wrestling, a lot of lifting. We did preseason this fall and almost all of them came in consistently for the three months."

"It's pretty big. I think this year's going to go pretty good," Fernandez said of his win. "I noticed he was on his heels a lot and as soon as he started pushing me back, I just knew that his momentum was going to carry into (the pin)."

Fernandez then defeated Sierra Junior Kirby Diaz, overcoming an early 0-2 deficit to win by a 9-4 decision and advance to the finals.

"A freshman battling against upperclassmen and to be honest with you he's just having a really good year," said Widefield coach Avelino Mota. "He's never out of a match. It's about keeping your composure and trusting what you're supposed to do. When the time came to score and win the match, he racked up a bunch of points."

Despite being one of the smaller schools, St. Mary’s fans and coaches cheered as loud as anyone when their wrestlers were up. Senior Dominick Cuccinelli pinned Coronado’s Andre Cruz in the 150-pound weight class to begin the day.

This years Metros mean a lot to Cuccinelli who lost two years of high school wrestling due to COVID-19 and low interest at St. Mary’s.

"We didn't have a team the past two years so it's really awesome for me as a senior to go out there and represent my school my senior year," he said. "One of the things I love about wrestling over a lot of other sports is the size of your team matters for team points, but as an individual you can be a good individual wrestler and have a good season."

Cuccinelli and Anthony and Andrew Isek went around the school recruiting and getting support to field the team and wear the St. Mary's green at Metros and throughout the season.

Anthony, a senior,  advanced to the finals where he took second place via decision to Pine Creek sophomore Eljiah Banks in the 126 weight class. Cuccinelli fell in the semifinals to Pine Creek senior Treye Dashner. He went on to place fourth overall.

Tragedy struck Cheyenne Mountain’s team Friday as Grant Kunkel tore his ACL in his knee. The Red-Tailed Hawks senior had overcome ACL tears in both knees and got cleared to wrestle his senior season.

Cheyenne Mountain sent two wrestlers to the semifinals in senior Patrick Ransom at 132 and freshman Wyatt Boley at 138.

Boley was pinned in the semifinals and finished fifth on the day. But Ransom won his match by pin fall and went on to win his weight class.

"Sometimes before my matches I think of (Kunkel)," Ransom said after his semifinals victory. "I gotta do it for him because he's been such a good part of our team and such a good team captain and leader. It's just so sad."

In the heavier weights, The Classical Academy senior Tanner Eide found win 100 Saturday at weight class 215. He beat Liberty senior Josh Knebel in the semifinals with his mom in attendance. She has been watching him wrestle since he was four years old.

"We've gone through a lot of family hardships and then his own personal hardships so getting to this moment and him seeing his value off the mat and and on the mat just kind of reiterates how great a wrestler he is," Angie Eide said. "When all wrestlers doubt themselves now and again, sometimes these big wins happen which are great, sometimes they don't but this one was awesome."

Win 101 will have to wait, however, as the TCA senior was pinned in the finals by Eagles senior Nate King.

Rounding out the tournament at the 285 heavyweight mark, Mesa Ridge senior Matthew Moore once again took the gold medal. Moore pinned Falcon senior Jeremiah Sandiford in the evening's final match to secure his third first-place finish at Metros. He would have had the opportunity to be the third wrestler ever to win four Metro titles but no tournament was held in 2021 due to COVID-19.

"I love the people first and foremost everyone that surrounds me, the fans the coaches, the teammates," he said about the sport. "It's sports entertainment television. I'm out here to have fun, entertain people, it's what I do."

Wrestling in the 100-pound weight class, Doherty’s Katey Valdez is often the first person on the team to compete in a tournament, coach Jacob …