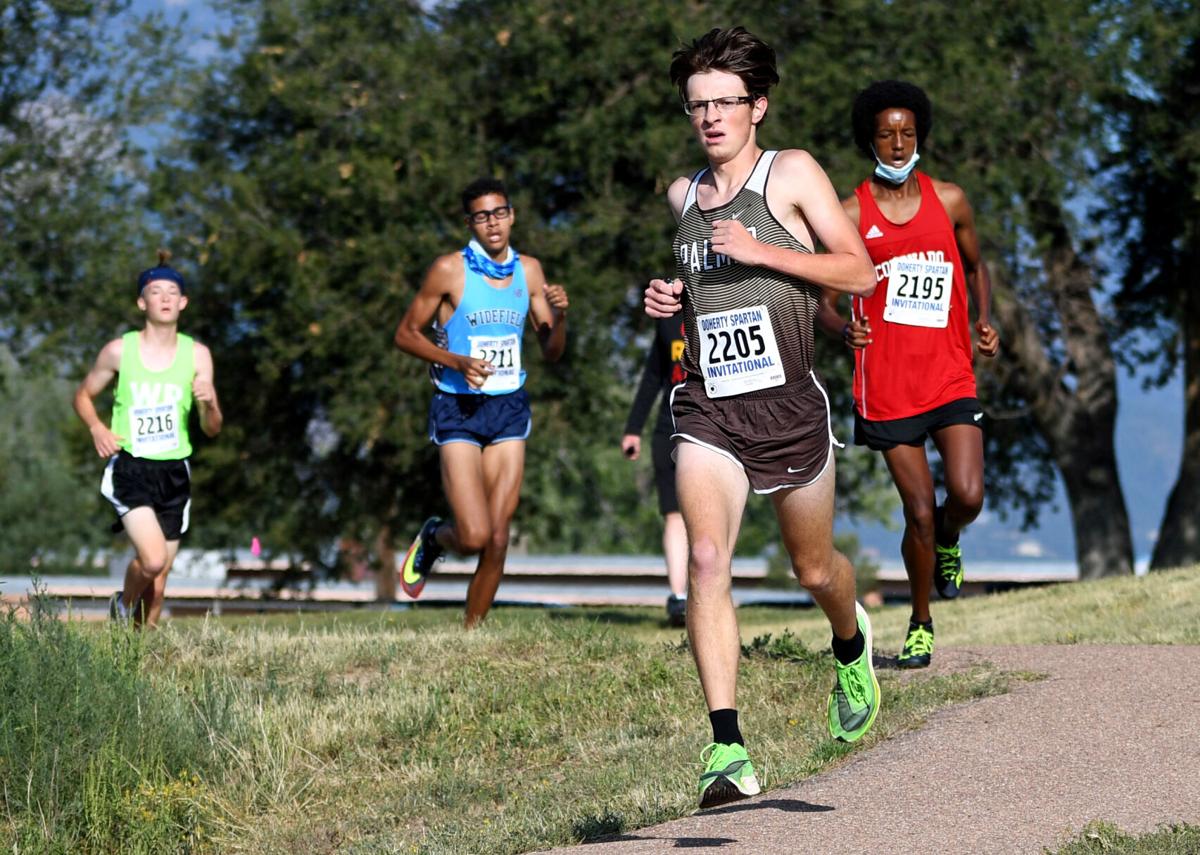 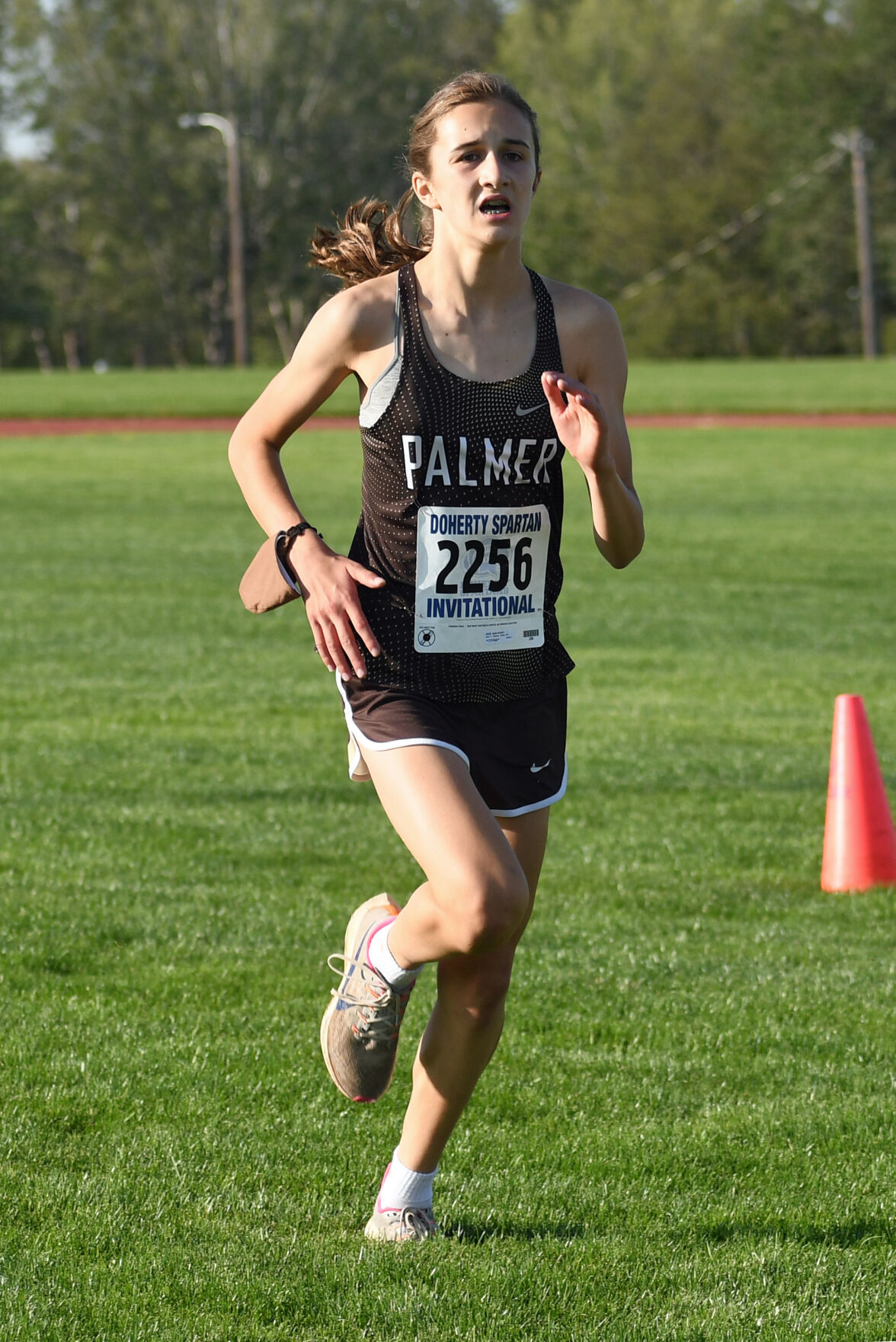 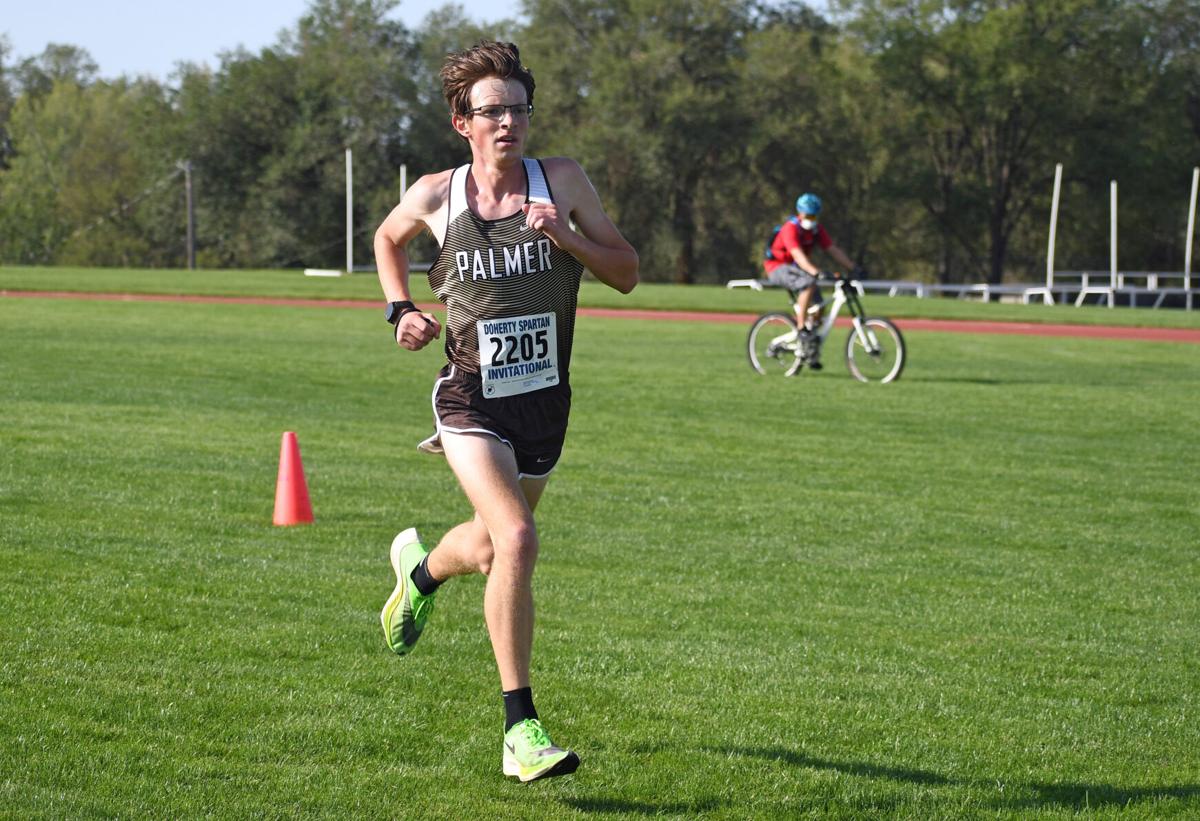 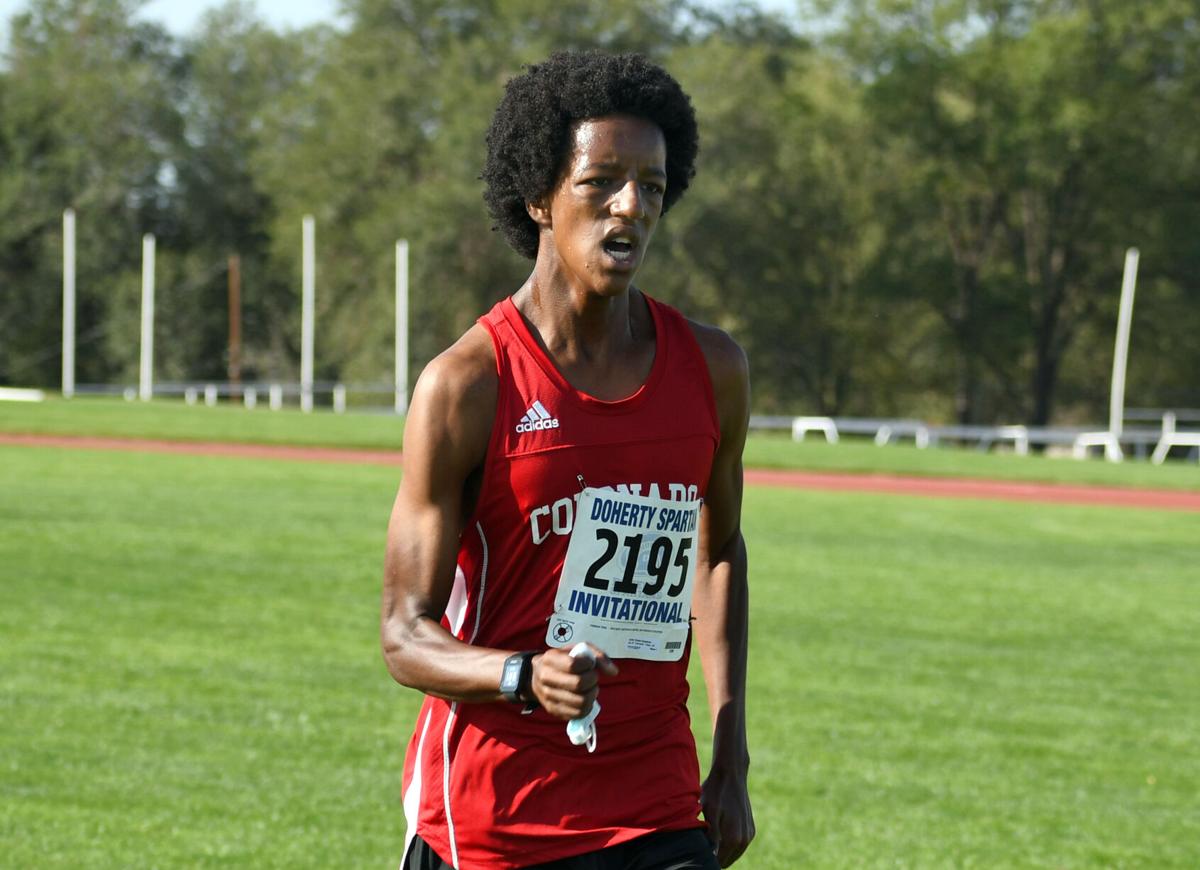 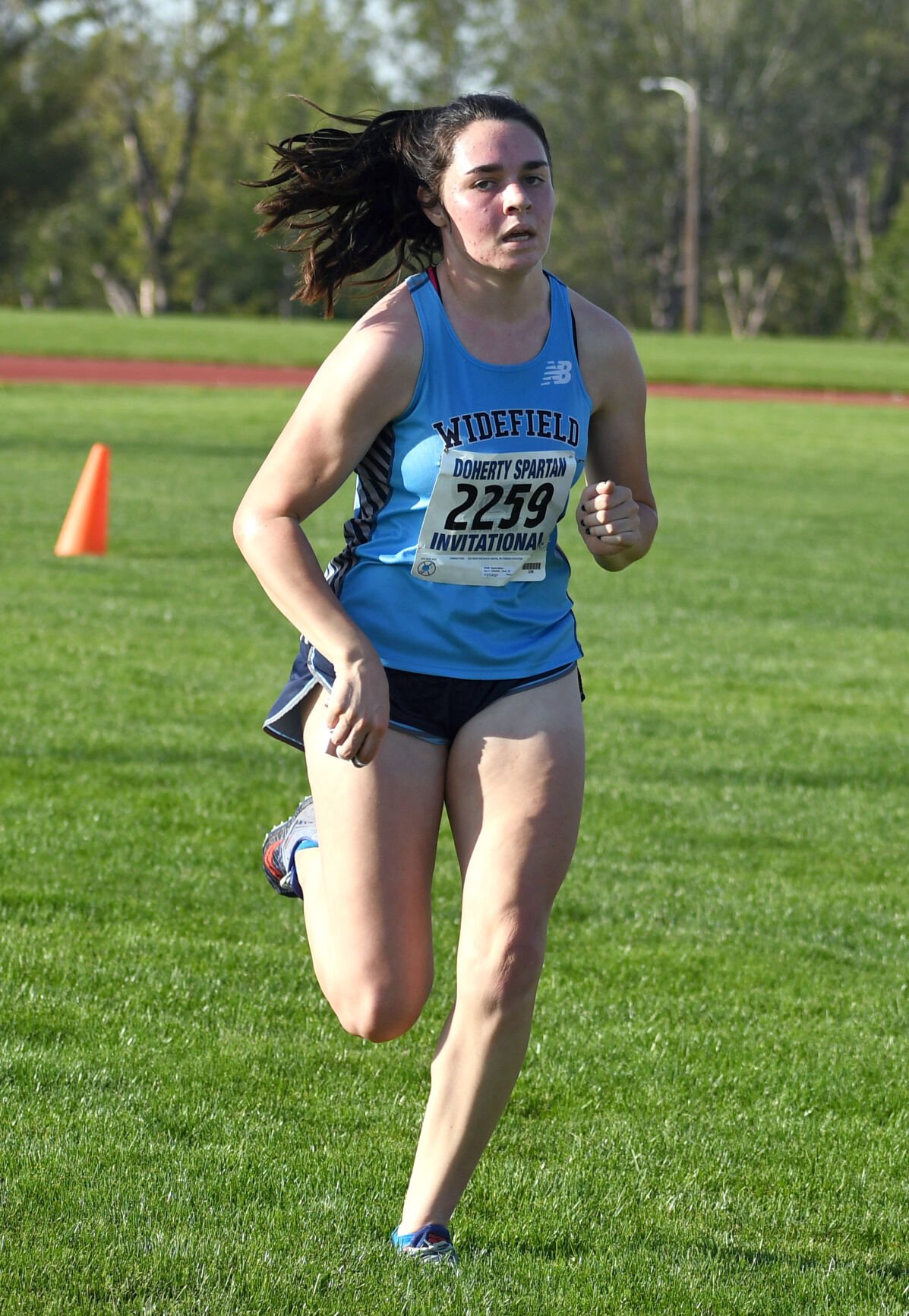 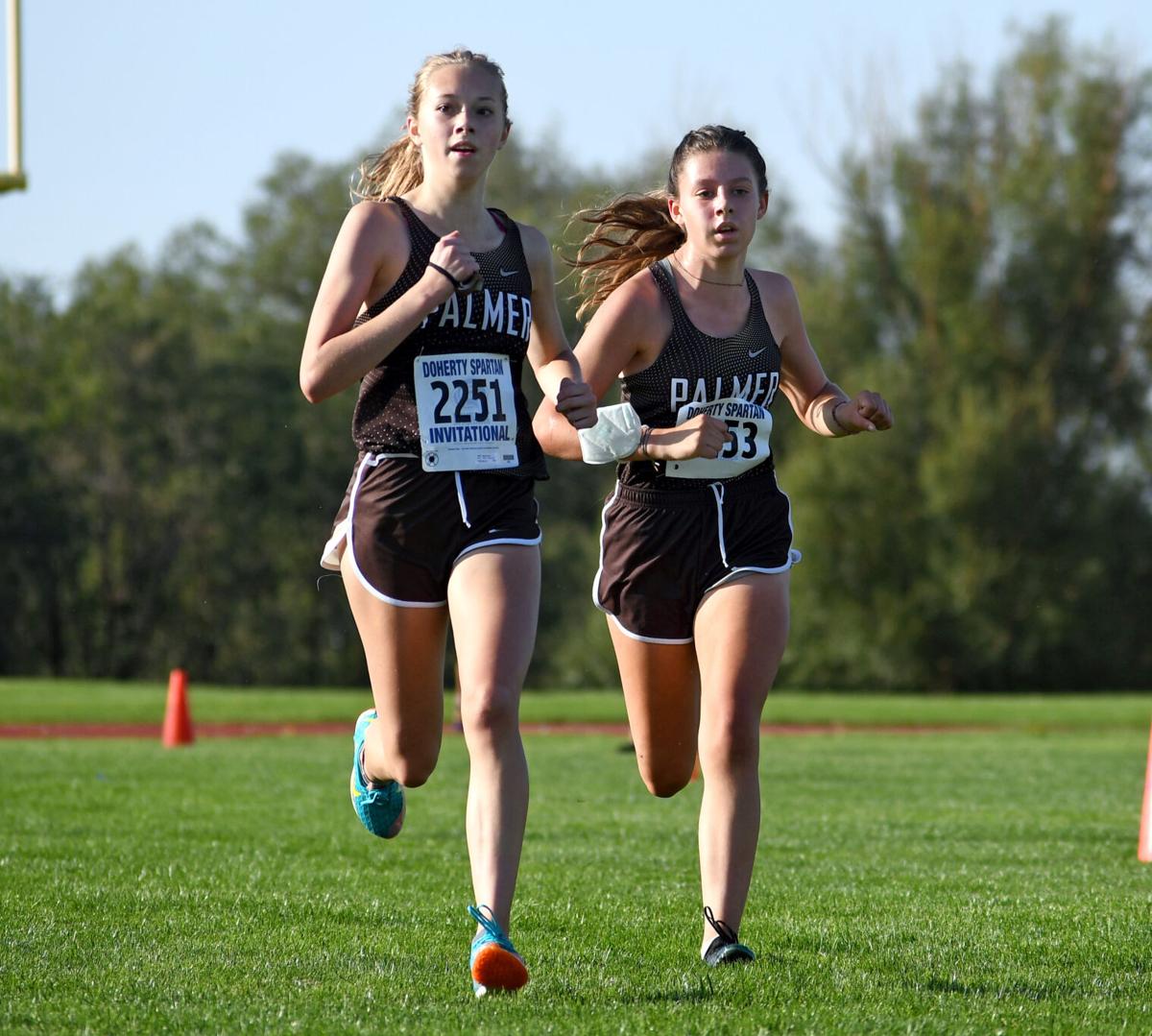 Palmer’s Molly Spruce and Jilli Lange battle in the final 100 meters for 6th and 7th place at the Widefield Gladiator Invitational on Saturday, Sept. 5, 2020. (Lindsey Smith, The Gazette)

Palmer’s Molly Spruce and Jilli Lange battle in the final 100 meters for 6th and 7th place at the Widefield Gladiator Invitational on Saturday, Sept. 5, 2020. (Lindsey Smith, The Gazette)

At Widefield Community Center: Palmer swept the individual and team championships at the Widefield Gladiator Invite with both the boys’ and girls’ teams placing their top five runners in the top 15.

“Our season we are really focusing on a growth mindset, in large part it’s coming back from setbacks from the spring,” Palmer coach Rob Gilliam said. “Not having a track season, running over the summer with new guidelines was a new experience, and trying to keep kids motivated to want to run and to want to compete.”

He said it was a challenge to keep his team motivated with the possibility that there might not be a season, but once cross country got the green light, senior Ellie Schueler coined the team’s 2020 slogan: gratitude.

“They're not in school and they're missing those connections, so let's then channel our energy into cross country because that is an opportunity,” Gilliam said. “For today this is the only race we have this season because we don’t know if we will have a season tomorrow, or will get to compete in another race.”

So they’re laying it all on the line.

The boys’ race was led by senior Scott Prieve who won the race in 16:22.85, chased by Coronado’s Zinabu Engstrom in 16:34.06. The two were the only runners to run the course under 17 minutes.

Despite placing two runners in the top three, Coronado took third as the rest of the Cougars placed 20th or higher. Widefield, however, snuck into second with its top four runners placing in the top 15.

Palmer's girls placed each scorer in the top 11, led by sophomore Adele Havlick with a PR of 20:05.60. She crossed more than 33 seconds ahead of second-place finisher, Sophia Mena of Widefield. Mesa Ridge’s Elizabeth Carlos crossed third in 21:00.82, followed by Palmer’s Faith Kelly in 21:08.97.

Terror sophomores Molly Spruce and Jilli Lange placed sixth and seventh, respectively, with a sprint down the  chute with just 2.55 seconds separating their times. Sophia McIntyre placed 11th in 22:32.14 as Palmer’s fifth and final scorer.

At El Pomar Youth Sports Center: Sierra Finn threw a four-inning two-hitter and struck out five batters on the way to a nonconference win over Harrison.

Layla Paet and Natalie Peters led the Jaguars (4-4) at the plate with two hits and two RBIs each. Finn, Hayden and Ryleigh Peebles had an RBI each.

At Discovery Canyon: A five-run fourth inning proved to be what Pueblo West needed to remain undefeated as the Cyclones claimed a nonconference win over Discovery Canyon.

At Pueblo South: Pueblo South only gave up three hits to keep the Lancers controlled in a nonconference win.

At Runyon Field: Pueblo County overcame a small deficit in the bottom of the third inning and never looked back as the Hornets took down Fountain-Fort Carson in a nonconference clash.

Jenisah Mora and Aleah Ellis each had two hits and an RBI for the Trojans (3-4), and Autriana Cox and Shawnee Phillips also knocked in a run.