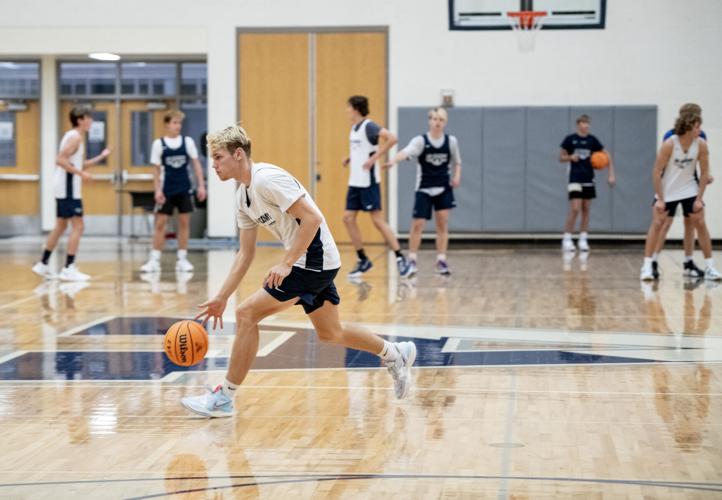 Rider Grow dribbles the ball during a practice drill at Air Academy High on Wednesday, Nov. 30. 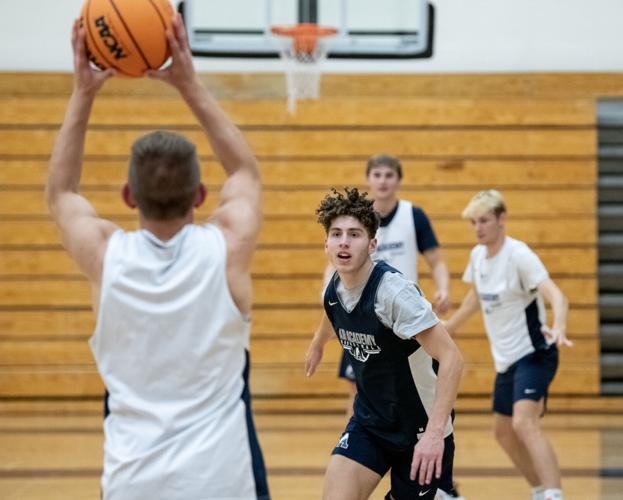 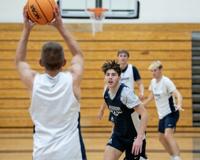 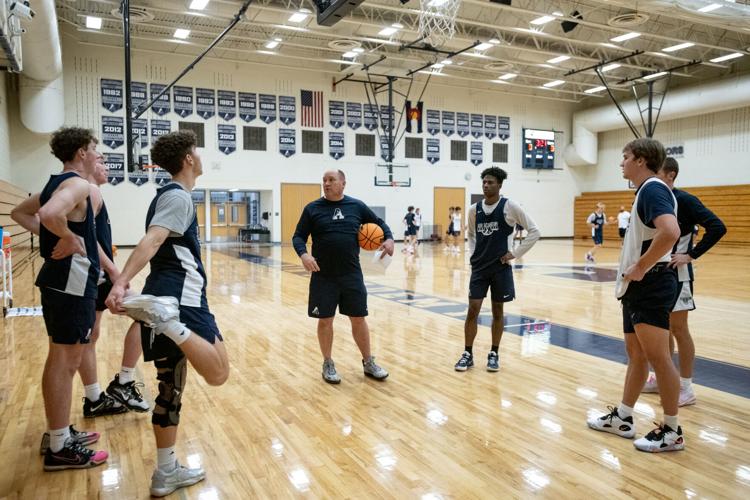 Rider Grow dribbles the ball during a practice drill at Air Academy High on Wednesday, Nov. 30.

Barry Clark gazed through Air Academy's reinforced classroom windows at a whiteboard with half-court templates and green marker all over.

Even while the coach was doing an interview, senior Corbin Graver was walking the team through plays alongside other seniors.

It's a small thing for Clark, but his team, full of athletes who have been playing together since grade school, is almost able to conduct business without the coach.

A team full of juniors was eliminated by eventual 5A champion ThunderRidge last year. That same group, plus former St. Mary’s standout, junior Max Howery, is looking to capitalize on their identical timelines and get over the final hump.

"The beauty of this is even past Air Academy, we've always been playing club ball together," senior Finn Horsfall said. "It's enjoyable. Every day you're coming to practice with not just your teammates, but your best friends."

Even still, the group hasn't seen its own beauty yet.

At the season's first practice, Garver, Horsfall and company were expecting to be the same team that nearly upset No. 1 ThunderRidge last year thanks to a lead heading into the fourth quarter.

The chemistry is there, but the rust was, too, and the team is full of players who strive for perfection, even on the first day.

"I think a team with this much intensity is unique to me," Clark said. "They have taken personal responsibility of this season. They are committed to each other and it's not because of me, it's because they have committed to one another.

"I'm lucky enough to have known some of these kids since fourth grade, and they have always been so committed."

The challenge is a different one with CHSAA's addition of a 6A for boys' and girls' basketball.

Last year's 4A champion, Lewis-Palmer, is now back in the same 5A classification as the Kadets. Falcon, Cheyenne Mountain, Discovery Canyon and Palmer Ridge are also part of the area's group that moved from 4A to 5A with the shift.

Air Academy faced Pine Creek, Fountain-Fort Carson and Vista Ridge as part of its 5A slate last season. Now, it'll double up on matchups like Lewis-Palmer and Lutheran.

"No other team has the experience and bond that we do, and that will help us," Garver said. "No matter what team we face, we'll play just as hard. Classification isn't important — it's about each individual team."

Days of 16-hour Disneyland marathons are over for the group — they still have the funny roller-coaster photos to prove it happened. It will be a hard day to recreate with Elitch Gardens closing soon for the winter, too.

But those days of growing up with one another and experiencing club- and school-sanctioned basketball all over the country are things the Kadets hope pay dividends.

Other Top Teams to Watch

The Spartans lost before they wanted to last year — partly because of injuries and ineligible players. JJ Brimble, brought in to be an interim coach for the season, will look to reverse the result.

Senior Christian Drummond will lead Doherty from his guard spot, and lean on fellow senior Zion Tucker, among others, for support in a new 6A classification. The former averaged 14 points and four assists per game last season en route to a commitment to Colorado College.

Vista Ridge (Last year's record: 18-6; lost to Douglas County in 5A second round)

He led the Wolves with 14.6 points per game as a junior and will look to double down on the success. Coach Ethan Rasmussen's formula of team defense and communal scoring doesn't figure to change, either, even in 6A.

Losing Cam Lowe to Air Force and Brady Jones to Black Hills State will be a lot to overcome, but Lewis-Palmer still has one of the area's elite coaches in Bill Benton.

Pine Creek's inaugural 5A playoff run ends at hands of No. 1 Cherry Creek

He'll lead a group headlined by senior Eli Robinson and junior Cohen Edmondson. Both were a key part of last year's state title run and continued the success with 25 combined points in a buzzer-beater win over Chaparral to start the campaign.

Harrison (Last year's record: 15-10; lost to Pueblo Central in 4A third round)

Senior Jamison Taylor and junior Kenneth Jones Jr. are out to prove last year's Harrison run wasn't a novelty but a habit.

The two will have to fill the hole left by Donovan Sterling who led the team with 13.6 points per game last season before graduating. Taylor wasn't far behind with 13.3 and Jones sat at third on the team with 11.8 — both averages that figure to grow with elevated reliance.

Manitou Springs (Last year's record: 14-10; lost to Resurrection Christian in 3A second round)

Caleb Allen is gone, but the rest of the Mustang's top-four scorers from their playoff run last year are back. Seniors John Maynard, Andrew Rhodes and Lairden Rogge represent the trio looking to go further this time.

Maynard led the bunch with 13.4 points per game last season. Rhodes and Rogge averaged 9.7 and 9.5, respectively, but figure to hit double digits throughout the year.

The Classical Academy (Last year's record: 9-15; lost to Harrison in 4A first round)

The Titans have already avenged last year's playoff loss to Harrison after beating the group in the opener, 62-58.

Senior Mason Smith and junior Jordan Wenger led the way in the inaugural win, and figure to be relied upon for double-digit scoring moving forward. The latter led The Classical Academy with 13.4 points per game last year.

Sam and Max Howery are gone. The Pirates also lost three other seniors — the five-man group being the top-five scorers for last year's roster.

Jim Masterson has lost plenty of players in his time at St. Mary's, though, and dubbed senior Dillon Barrett and junior Ely Ferrara as the two captains to led the resurgence. They combined to average 11.2 points last year, and figure to at least double it this season.

Colorado Springs Christian (Last year's record: 15-8; lost to Eaton in 3A first round)

Much like Air Academy, timelines have matched up for a final Lions' push.

All five of Colorado Springs Christian's leading scorers from last year return, led by senior Nathan Davies. He led with an 18.8-point scoring average and added 14.8 rebounds to boot.

Davies scored 26 and pulled in 24 rebounds in a playoff loss to Eaton. Improvements across the roster will only help the Lions' big man.

Evangelical Christian Academy (Last year's record: 23-3; lost to Merino in 1A first round)

The season went nearly perfect until the playoffs for Evangelical Christian's 2021-22 group.

Now-seniors Michael Kim and Jared Guest represent the Eagles' top returners from the early exit. The former averaged 9.1 and the latter landed at 8.3 points per game. Coach Bob Wingett has both the talent to compete and the motivation to fuel his team for a rebound.