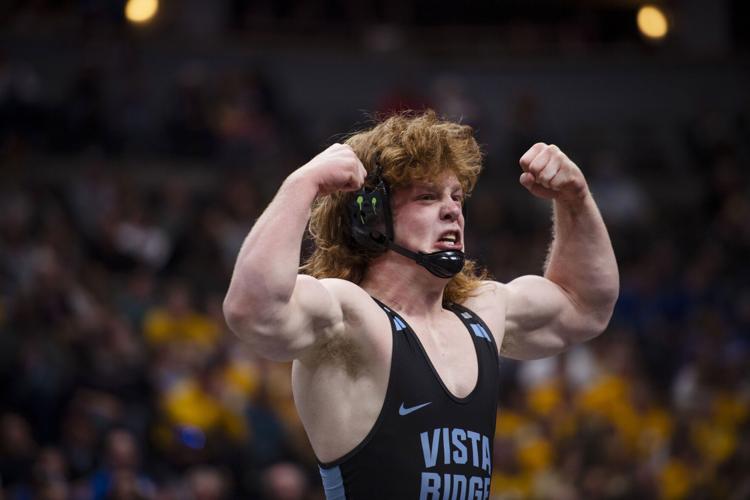 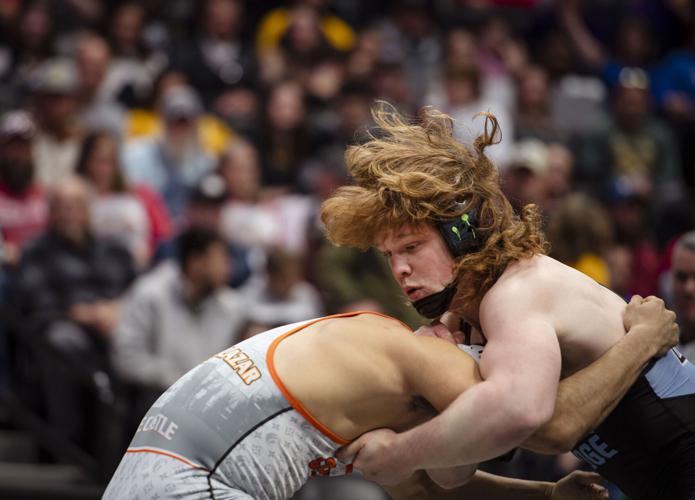 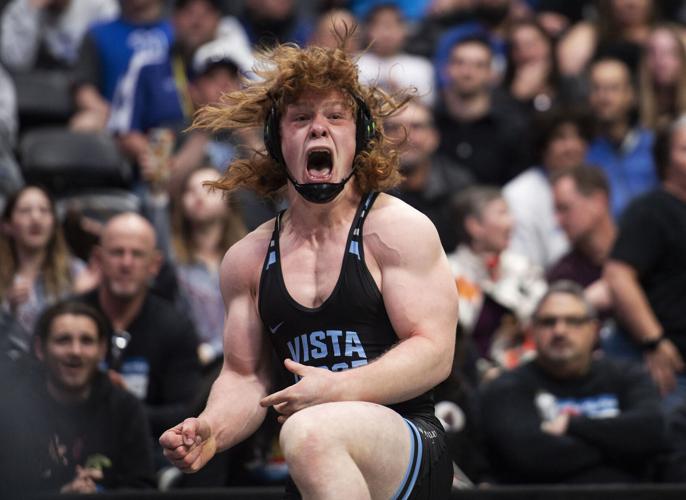 Vista Ridge senior Max Coddington reacts as he is announced the winner of the 4A state title in the 182-pound class. 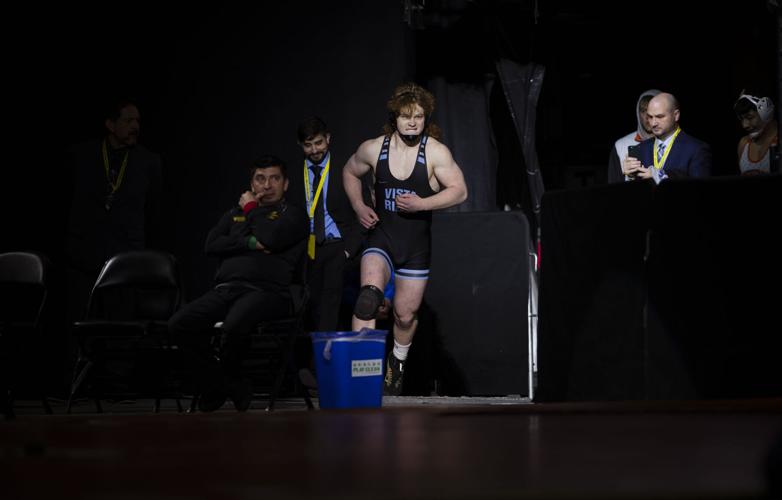 Vista Ridge senior Max Coddington reacts as he is announced the winner of the 4A state title in the 182-pound class.

Max Coddington practices in the back corner of the Vista Ridge wrestling room.

That's his spot, and it's been his spot for years. One day in practice, coach Eric Everard came to him and wrapped his arm around the now-senior and simply said, "Look at what you've built."

Before he'd even brought a title and the crown of first 100-win wrestler in school history to Vista Ridge, Coddington's impact was apparent.

The program created a leadership trajectory for all classes to go through to be awarded title of one of the team's captains or top of the pack. And it all started with a "doughy," 180-pound version of Coddington from his first junior varsity finals as a freshman — peering down at a second-place medal, tears streaming down his face after the emotions of his first hardware came in waves.

Three-plus years and several hurdles later, Coddington was once again filled with emotions that brought him to his knees on the 4A, 182-pound mat of the state final.

A journey of heartbreak led him to a state title, a 40-1 record, and now, the area's Peak Performer.

"After having a losing record as a freshman, I decided to go all out for it." Coddington said. "I quit football and I started to watch other wrestlers a lot more and talk to my coaches about getting better."

One of those coaches, who's since moved on, even playfully jabbed at Coddington, telling him, "Well, you might place at state by your senior year."

Those words became engrained in his mind. He thought about them every day for multiple years and used it to get through the pain of COVID-19 taking most of a season away. What's more: Hamstring, head and hand injuries all sapped his abilities at state as a junior.

From that year, he gained things, too.

Coddington always placed a focus on putting in more work than those around him. It wasn't until he began to mature as a wrestler that he realized quality training beats out quantity training.

When a local coach was getting rid of some old mats, he naturally had one cut to size and put into his own home.

"I got pretty down on myself after that match junior year," Coddington said. "But, I focused on the little things like tying up and not crossing my feet. Instead of getting in all this extra practice, I'd work on recovery and technique with my coaches.

"The little things matter so much, and they add up. I think that's what was the biggest difference between just placing and now winning state."

He even went as far as creating a routine for entertainment. Before each big match, he made sure to watch "South Park" — the animated comedy created by two Colorado natives.

Coddington may not be superstitious, but he is a little 'stitious.

Before the year, he guessed at who he'd face in the title match. He even practiced the move he'd use to beat him. Greeley Central's Yahir Chairez-Salazar was the guess.

"I told my coaches all year who I'd face," Coddington said. "I told them exactly what I'd do the next time I wrestled him — and that's exactly what I did. Right after I won it, it felt like I was finally able to breathe again."

Mind you, Coddington wrestled opponents who were as much as 10 pounds heavier than him most of the year. Cutting weight was a dangerous process for him and led to the choice to wrestle up, despite the size disadvantages he'd face.

Other areas benefited from the choice. Coddington didn't have to cut weight anymore. He didn't have to stay up late the night before to do additional workouts — which only boosted his recovery efforts.

Now, the fire-red mullet of Coddington will be heading to Western Colorado University. He has no intentions of waiting until the final year at his new home.

"I have to stay the hunter," Coddington said. "I'm going to chase the winning feeling forever. I'm going to Western, and I want to be a national champion."

Coddington's younger brother, Wes, will carry on the family name. But, make no mistake about Vista Ridge wrestling: It's forever changed by Max.

Cheyenne Mountain and Falcon captured the attention of fans across Ball Arena as both battle for the coveted 4A title — the Hawks trying to win their second in a row.