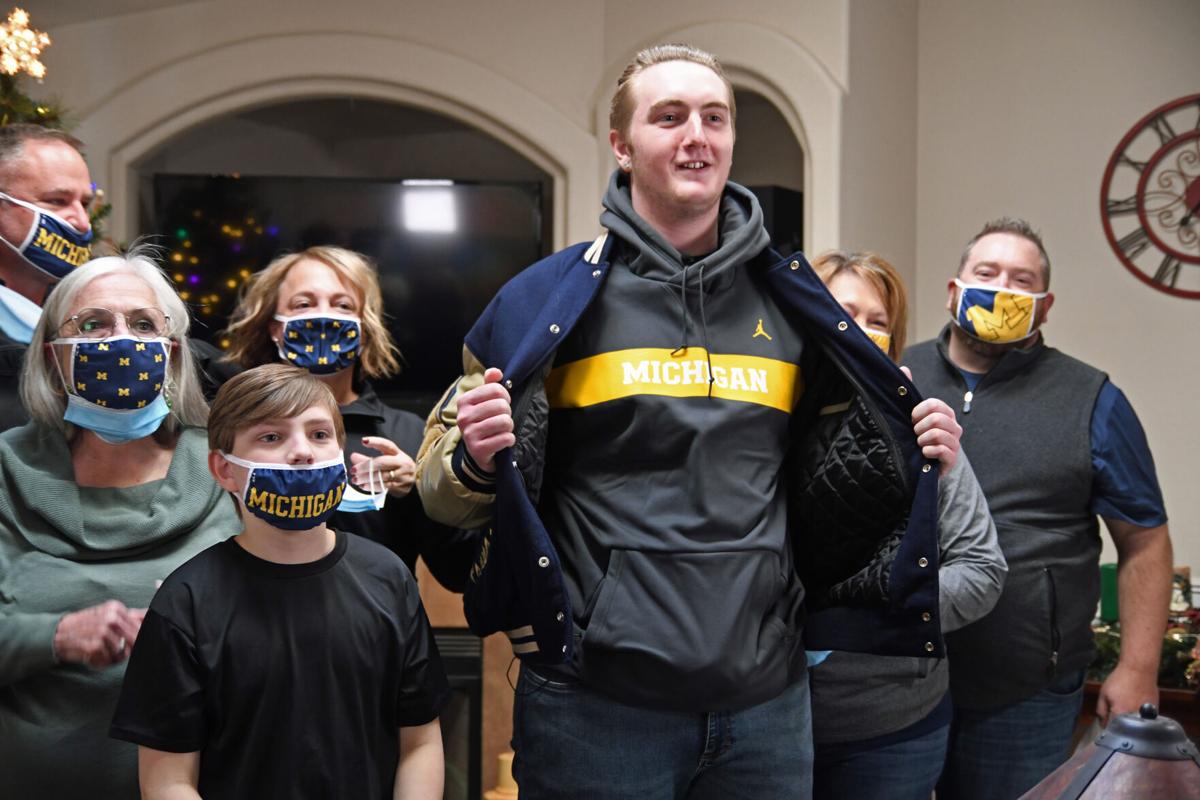 Connor Jones reveals his Michigan sweatshirt after announcing his commitment to play football at the University of Michigan. 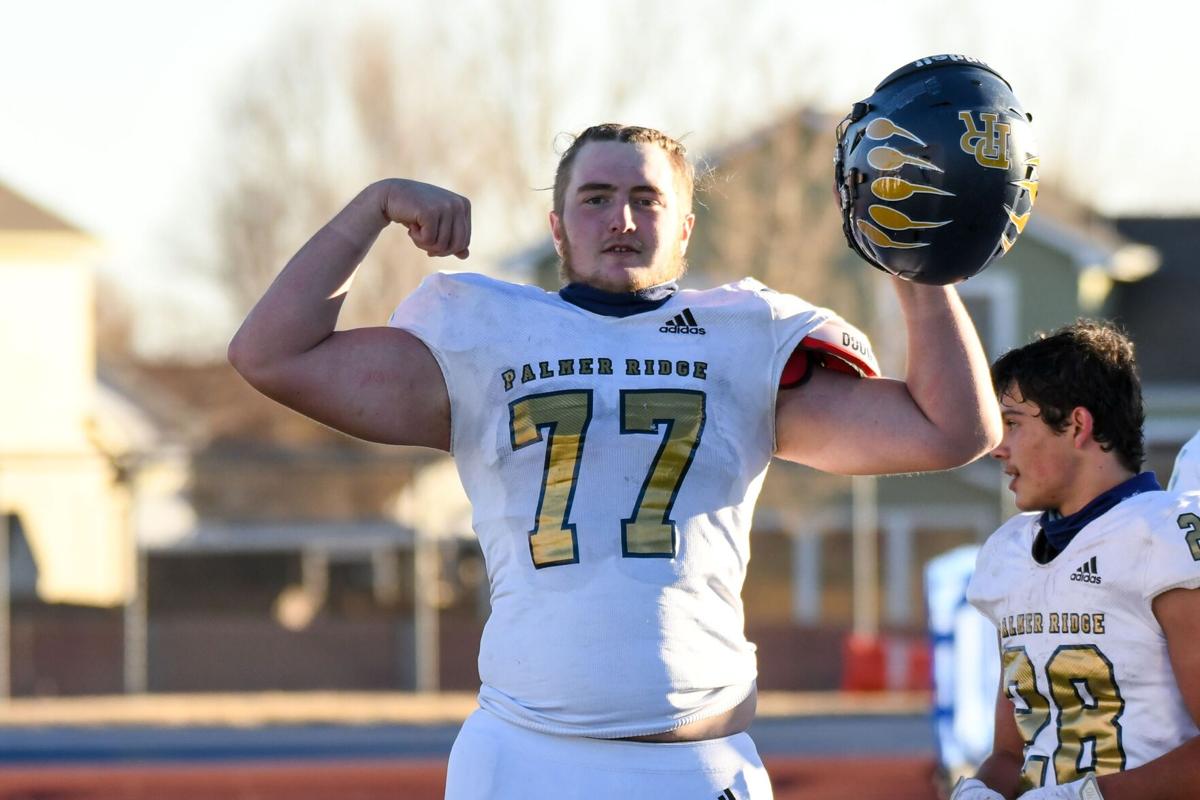 Palmer Ridge junior tackle Connor Jones shows off his 6-foot-7, 285-pound frame after heling his team to a playoff victory over Fountain-Fort Carson on Nov. 28. Jones is being recruited by dozens of Division I universities. 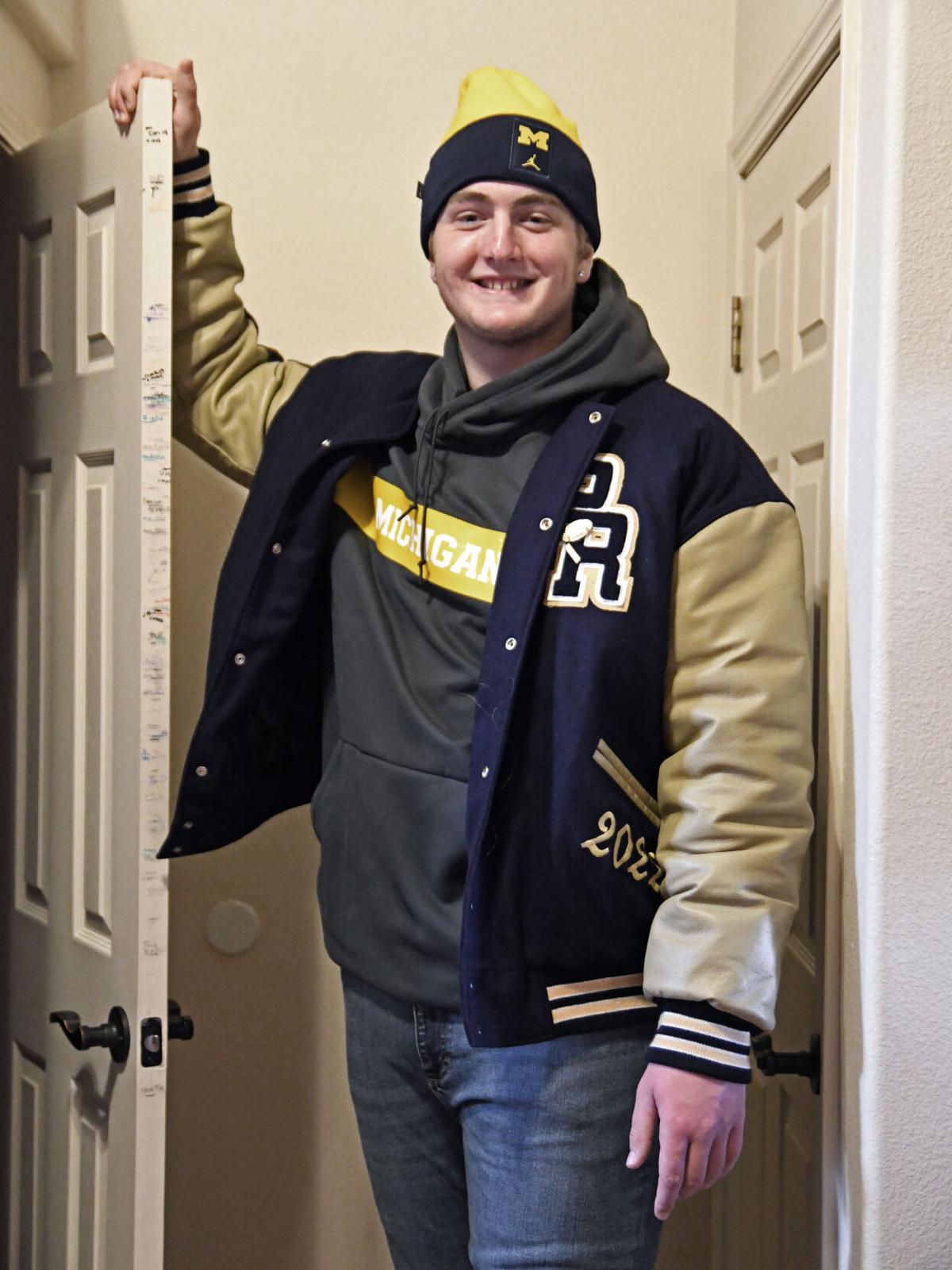 Connor Jones, a 6-foot-7 lineman at Palmer Ridge, stands next to a closet door, which reveals a height tracker from his childhood. (Lindsey Smith, The Gazette)

Connor Jones reveals his Michigan sweatshirt after announcing his commitment to play football at the University of Michigan.

Palmer Ridge junior tackle Connor Jones shows off his 6-foot-7, 285-pound frame after heling his team to a playoff victory over Fountain-Fort Carson on Nov. 28. Jones is being recruited by dozens of Division I universities.

Indiana, Northwestern, Oregon State and Virginia were among his top choices before landing on Michigan. He received eight Division I offers in total, sparked by interest from Colorado State his sophomore year.

“It came down to three criteria,” said Jones, a junior. “The school that I decided on had to be a hometown feel. It had to have my degree plan (kinesiology); that’s very important to me because that’s my plan B. And then finally development to get to the NFL was the most important part. The NFL is my plan A.”

Jones, a three-star offensive tackle according to 247Sports, still has a year left of high school football before heading to the Big Ten, but he has big dreams for his "Plan A."

“I’m looking forward to getting up and working,” Jones said. "Coach (Ed) Warinner up at Michigan projects me to be a three-year starter, which is going to be huge for me. I’m ready to get up there and get going.

“Michigan has a great strength coach who has developed a lot of NFL players, including Taylor Lewan, who is kind of my idol right now. I want to get to the NFL, and after that, the goal is to play my rookie year, get my second year contract and become the second paid offensive lineman in the NFL.”

Jones has anchored the offensive line at Palmer Ridge the past two seasons, helping the Bears average more than 400 yards of offense per game. As a junior Jones had 32 pancake blocks and helped Palmer Ridge reach its fourth consecutive state title game.

Jones said in addition to his specialized training at SixZero Training and Ground Up Sports Training, his experience at Palmer Ridge has helped mold him into a lineman destined for Division I.

“Our coaches do a really good job keeping our workouts high and intense,” Jones said. “We play an intense brand of football, high-tempo offense and we have to be ready to go-go-go.”

In his final season with Palmer Ridge, Jones said he’s excited to continue putting on weight and building muscle before he enrolls early at Michigan.

“Hopefully we have a full, normal season this upcoming year so we can really just go in and ball, and showcase what Michigan is about to get,” Jones said.

Year in Review: Looking back on the most-read Gazette Prep stories of 2020

I think it's safe to say that no one is sad to see 2020 come to an end. But we can't let that stop us from looking back on the high school spo…

Get to know Calhan High School's Taylor Knox and Ciara Monger, the 2021 Girls’ Wrestling Peak Performers of the Year. (Video by Skyler Ballard)