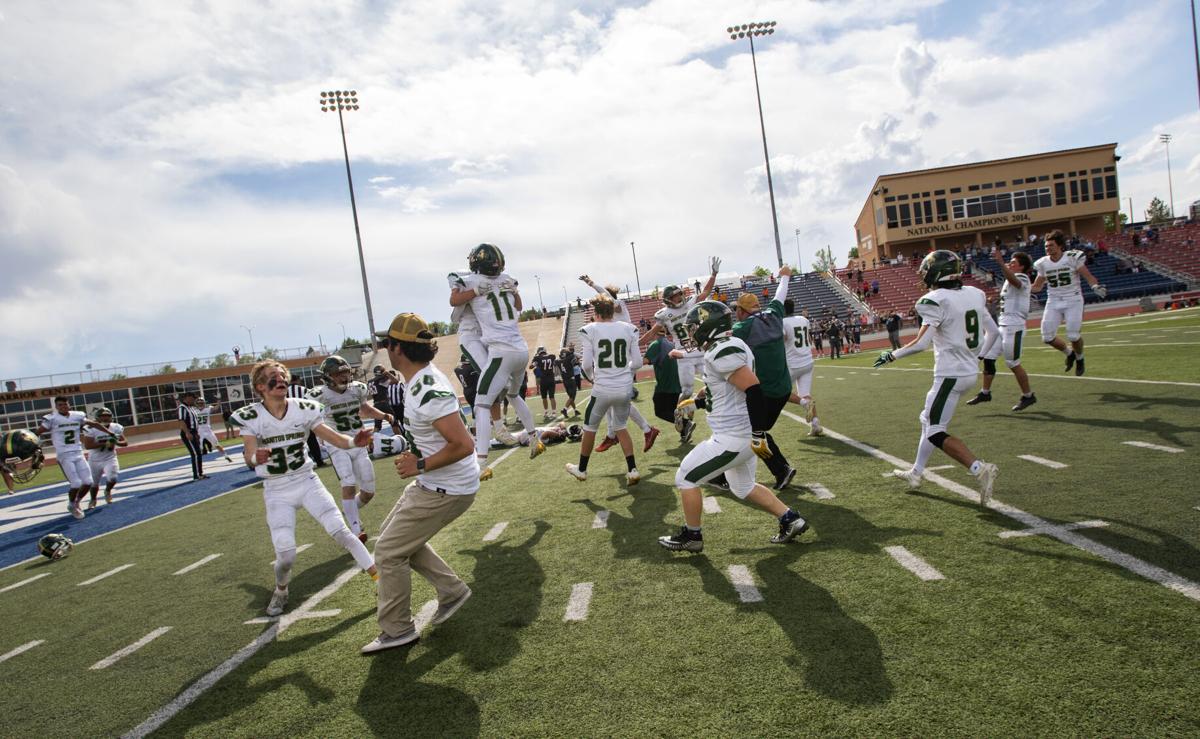 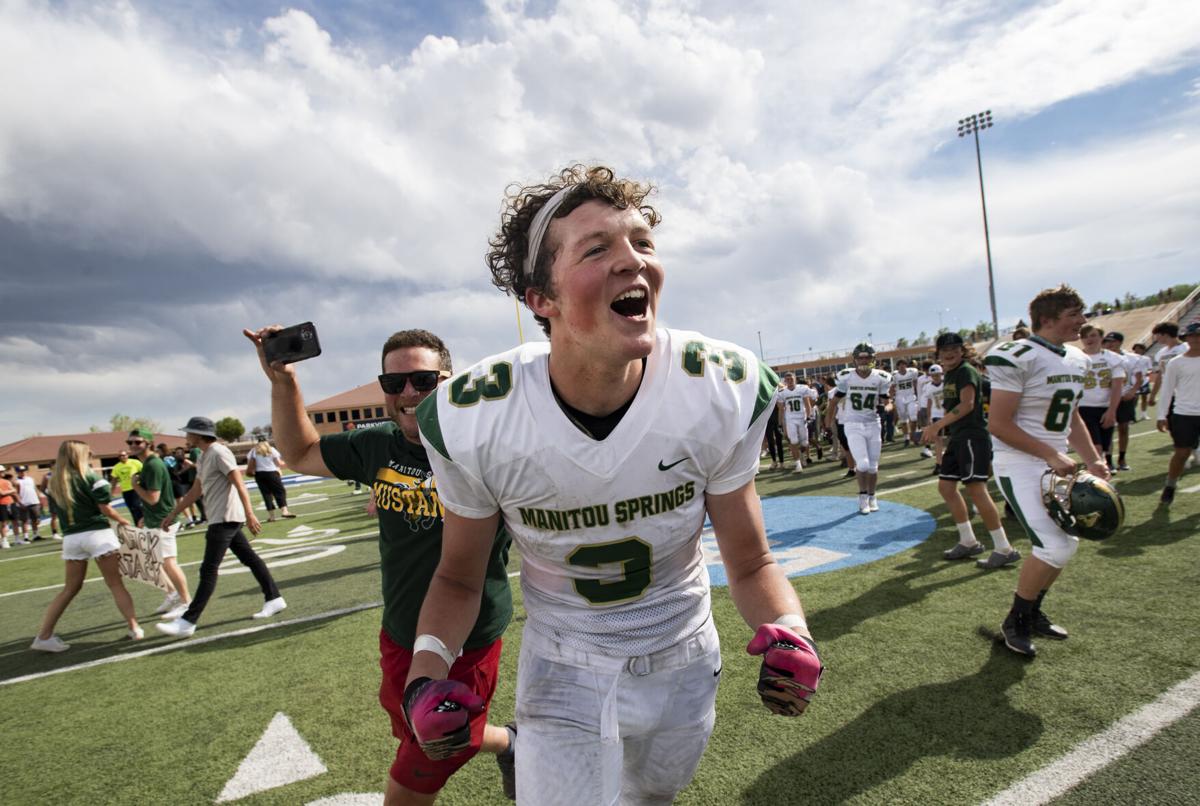 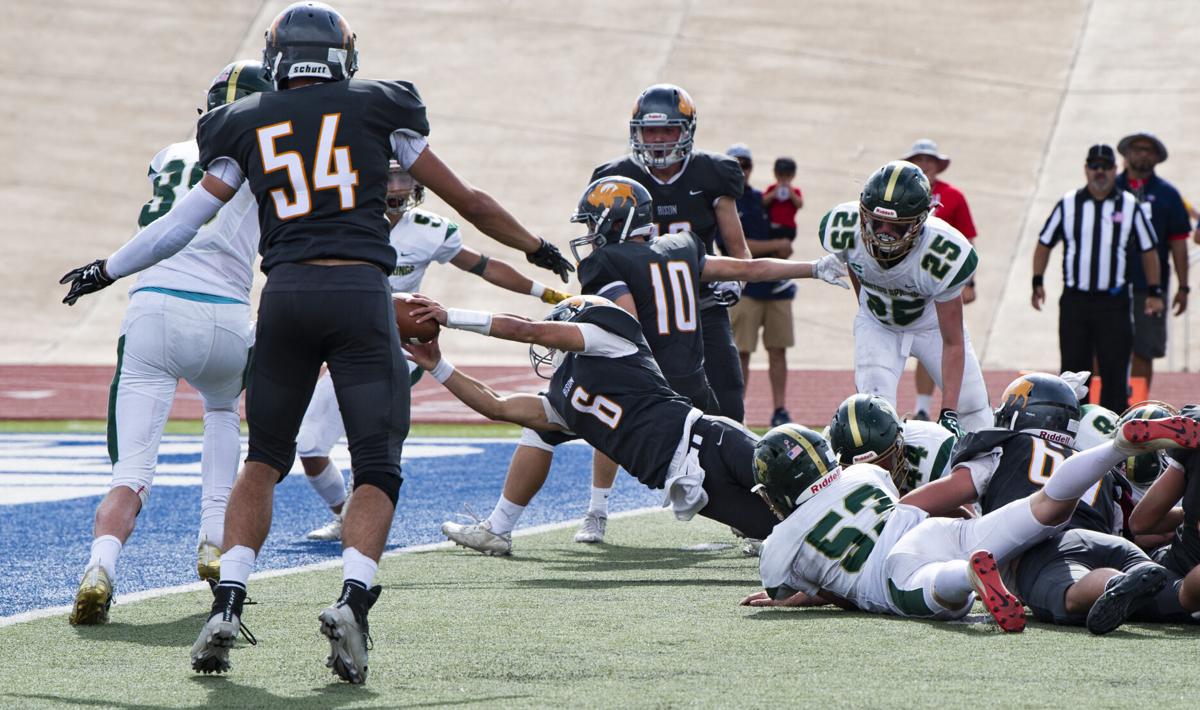 Manitou Springs defense stops Flatirons Academy quarterback Jacob Dube short of the goal line on a two-point conversion to give the Mustangs a 31-30 double overtime win in the Colorado State 2A spring football championship Friday, May 14, 2021, at CSU-Pueblo in Pueblo, Colo. (The Gazette, Christian Murdock)

Manitou Springs defense stops Flatirons Academy quarterback Jacob Dube short of the goal line on a two-point conversion to give the Mustangs a 31-30 double overtime win in the Colorado State 2A spring football championship Friday, May 14, 2021, at CSU-Pueblo in Pueblo, Colo. (The Gazette, Christian Murdock)

PUEBLO – Manitou Springs came up with the miracle.

Then it came up with a little more.

Quarterback Caleb Allen somehow spun out of a sack attempt and heaved a prayer 34 yards to Davis Mack on a fourth-down play for the ages with 1:05 remaining to set up a game-tying field goal for the Mustangs.

In the second overtime, Flatirons Academy quarterback Jacob Dube was brought down just short at the goal-line while attempting a game-winning 2-point conversion and Manitou Springs won 31-30 in a Friday afternoon thriller in the spring season 2A football championship at CSU-Pueblo.

“I think it was just kind of our time, and all the football gods were looking down on us,” Manitou Springs coach Cory Archuleta said.

The game was filled with highlight performances.

Running back Isaiah Thomas ran for 109 yards and scored two touchdowns in overtime. He also kicked four PATs, the game-tying field goal and scored the final 17 points for Manitou Springs.

Joah Armour, the 6-foot-7 senior receiver, caught eight passes for 160 yards and touchdowns of 31 and 10 yards as he helped the Mustangs to their first title since 1990. His father, Manitou legend Justin Armour, starred on that team before moving on to Stanford and the NFL.

There was also the defense of linebacker Parker Salladay, who made the stop on the game’s final play.

“He’s been a beast of a kid all year for us,” Archuleta said. “He’s the one who stepped up and made a play.”

But the story of this game can’t be told without putting extra emphasis on the play that saved the day.

Allen was all but down as he scrambled to his left on the fourth-and-12 play. Had he fallen as Flatirons Academy standout Trenton Rowan gave chase, the Bison would have simply had to take a knee to close the game.

“I was really close,” Allen said when asked if he thought he had been sacked. “He hit my heel and I thought I was going down. I just somehow threw it and Davis caught it and I was lucky he caught it.

Mack, who like Allen is a junior, was watching the play while on his route and thought his quarterback was going down, along with Manitou’s chances. When he saw him emerge and the pass come from his hand, the focus shifted.

“I was just thinking I’ve just got to jump up and get this ball, for sure,” Mack said.

It was a 31-year wait for Manitou’s latest football title. It might be even longer for a play as spectacular and impactful in a must-have situation can be replicated.

“If there’s one kid I knew could do something like that it was Caleb, because he’s such a competitor,” Archuleta said. “But in all my years I’ve been doing this – I’ve been doing this for 16 years football-wise and 27 coaching high school – that was by far one of the greatest plays I’ve ever seen. He stayed up, stayed upright, and for Davis Mack to go up and get that ball and stay inbounds was huge for us.”

The flurry finish came after the teams played to a 14-14 tie for the first 45 minutes. Flatirons moved ahead with a field goal with 2:45 remaining, set up by a 45-yard run from Derrick Dow on his first carry of the game and a 19-yard scramble from quarterback Jacob Dube.

Manitou took possession and moved across midfield on a 22-yard pass from Allen – who threw for 224 yards and two touchdowns – to Ethan Boren. Three plays later came the improbable pass from Allen to Mack.

The Bison led 251-90 in total yards in the first half, but Manitou trailed just 14-7 in large part because of a blocked field goal on the game’s first possession and a forced fumble near the goal-line that turned into a safety in the final two minutes.

The Mustangs then outgained Flatirons 190-103 in the second half and by an inch or two in overtime. It was enough.

PUEBLO - Seven months ago, the Manitou Springs football program didn’t know if it would see the field in 2020-21.