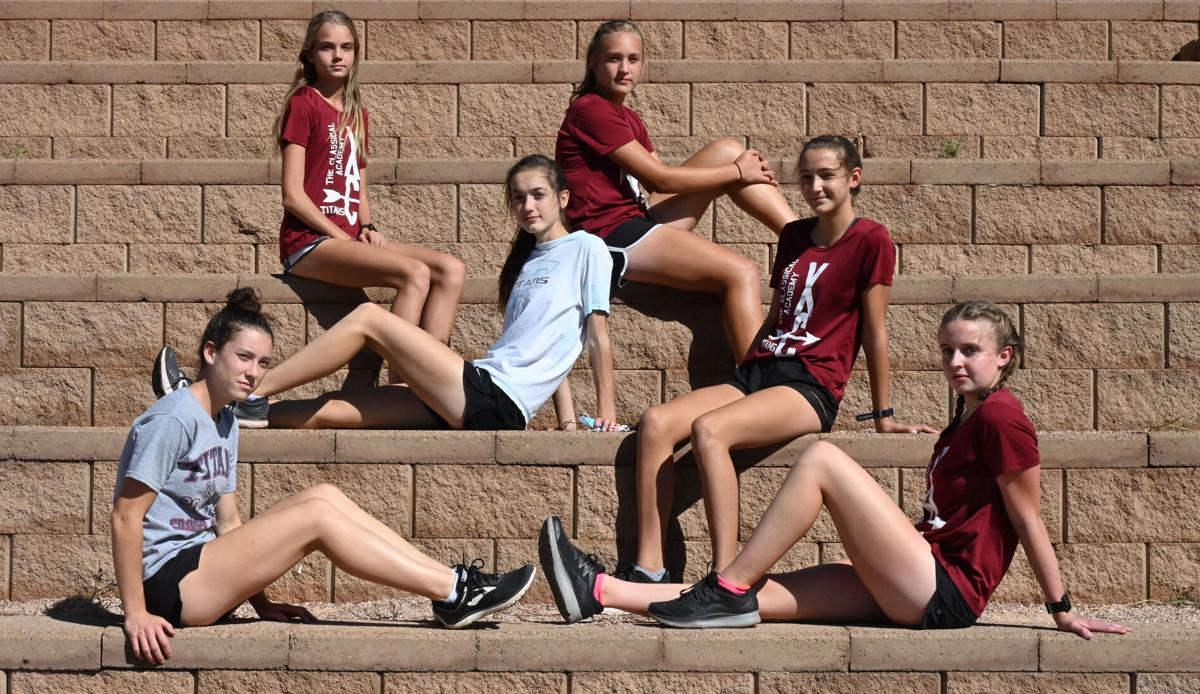 The Classical Academy girls’ cross country team is familiar with the exhilarating challenge of the state course at Norris Penrose. And Saturday the reigning Class 3A champions left nothing to question regarding their dominance at the Cheyenne Mountain Stampede.

The Titans placed five of six runners in the top eight at the ‘pre-state’ meet to take the 3A team title with ease. TCA scored so well, in fact, that had the team factored in points earned by its sixth and final finisher, it still would have won the event by seven points.

“If you had told me it was going to be that kind of margin beforehand I would have smiled and tucked it away and said, ‘No, I don’t really believe that,’” TCA coach Alan Versaw said.

Thanks to the efforts of Sawyer Wilson, Kennedy and Cassidy McDonald, Sophia Valentine, Kyra Shaner and Brooka Jones, the TCA girls’ cross country team has been named the Gazette Preps Peak Performers of the Week.

Wilson, last year’s girls’ cross country Peak Performer of the Year, won the event in 19:11.7, followed by Kennedy McDonald in 19:39.1 in second. Cassidy McDonald and Valentine were not far behind in fourth and fifth, respectively, while Shaner rounded out the team’s top five scorers in eighth place. Brooka Jones crossed the line two minutes later in 32nd.

By flooding the top 10 with maroon and navy, TCA finished with just 20 points, while the second-place team, Faith Christian, had 59.

“It felt good to get a taste of what it's going to be like in a few weeks just to refresh that from last year,” Wilson said. “It does give a little bit of pressure, but it’s more of a blessing and an amazing opportunity to be coming up with such a great team.”

Valentine’s time Saturday was a full 20 seconds faster than her state time last year, and the junior credited her improvement to extended  offseason training with her teammates, and the team’s newest edition, Cassidy McDonald.

“The whole team took the opportunity of not having a track season to work hard and gain extra strength over the summer and really build up our speed for our season,” Valentine said. “I felt a lot stronger and I had a new freshman, Cassidy, to run right beside me and that definitely helped. She is pretty amazing and it was really great to have my teammates behind me.”

The Titans, while young, are also close friends, but none more than the McDonald sisters, who were eager for the opportunity to compete together this year.

“I have been looking forward to this for a few years,” Cassidy said. “Being able to run with (Kennedy) has been really fun being able to look up to her and ask her questions.”

Kennedy, who placed fifth last year at the state meet, said their bond will help them through the latter half of the season and through to the state meet.

“I think working together really encourages you, and helps you do more for your team and we all have such a tight bond that we do it all for each other, not just for ourselves,” Kennedy said. “We’ve been training hard, so we are ready to showcase what we trained for.”

Peak Performers and Other Peaks are selected based on performances from Sept. 7-12. To nominate a Peak Performer of the Week email preps@gazette.com.

Isabella "Bella" Quintana, sr., Mesa Ridge softball: In a 4-1 week for the Grizzlies, Quintana made an impact at virtually every position. She was 2-1 in the circle, collecting 13 strikeouts through 17 innings, and helped turn two double plays, all the while hitting .500 with eight hits and four RBIs.

Bethany Michalak, fr., Air Academy cross country: Michalak had a memorable first run on the state cross country course, finishing in 17:27.5, marking the fastest time nationally by a female freshman. Her time would have won each girls’ classification race, and was more than a minute ahead of the next-fastest Colorado Springs runner.