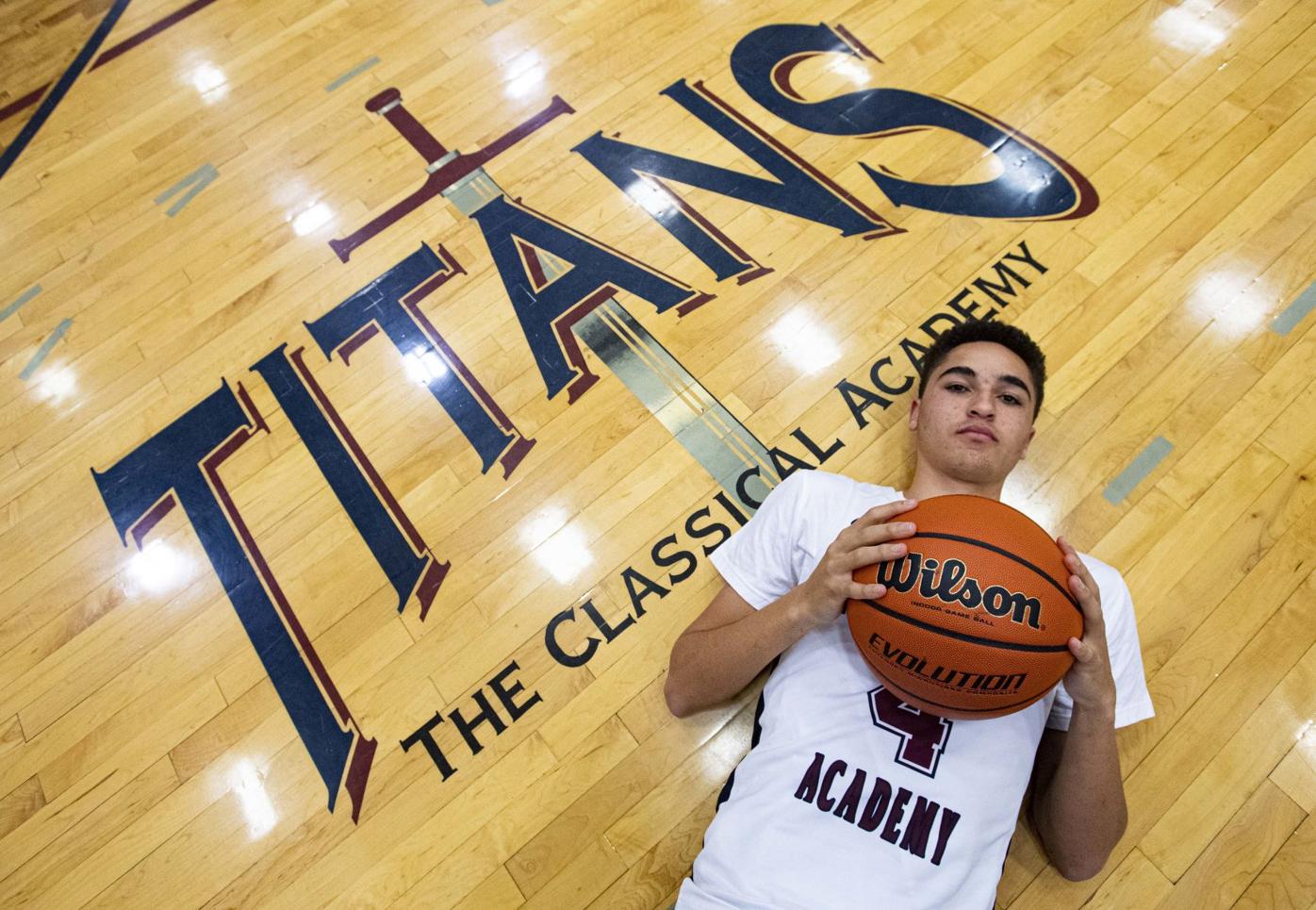 The Classical Academy senior Micah Lamberth is the Peak Performer of the week as he leads the Titans team to the Boys 4A state finals this weekend in Denver. Lambert is pictured at TCA Monday, March 9, 2020. (The Gazette, Christian Murdock)

When Micah Lamberth first picked up a basketball, he wasn't the Tiger Woods of his sport. He wasn't making long-range jump shots on the local YMCA floor or even dribbling the ball between his legs.

He'd basically just run around the court with "no skills." Those were his words.

Today, Lamberth is 6-foot-4 and 165 pounds. He's far from his younger playing days — though he loves the game the same, perhaps even more. He's a big part of The Classical Academy boys' basketball team's historic run this season, leading the Titans with 18 and 16 points in wins over Skyline and Longmont in the Class 4A state playoffs last week.

He nailed four 3-pointers in the second matchup to help lift TCA to its first Final Four appearance.

"We had high expectations coming into the season," the CSU-Pueblo commit said, "but we didn't have any pressure on our shoulders. Why have pressure when you're the underdog the entire season?"

Prior to this year, the No. 11 Titans had never won a playoff game. They kicked off the state tournament with a first-round bye before facing 4A Colorado Springs Metro League foe Mitchell. In that game, TCA escaped with a 45-40 win to top the Marauders for the third time this season.

From there, everything the Titans did was historic.

The Titans (20-5) play No. 10 Pueblo West (20-6) at 4 p.m. Friday at the Denver Coliseum for a spot in the state championship game. The two teams played in a tournament earlier this season, and Pueblo West won 62-46. But don't count out TCA just yet.

After all, this is the same Titans squad that knocked off Longmont 42-39 on Saturday in the Great 8. And the Trojans were a well-experienced playoffs contender, evident by their 2018 state title run and state runner-up finish to Lewis-Palmer last season.

Lamberth isn't doing it all by himself. He's getting a lot of help from fellow seniors Kade Walker and Tyler Trogstad, who both have scored in double figures in all three postseason games.

As much as Lamberth is known for his scoring totals and long-range jumpers, the same could be said about his leadership. At Longmont, Titans coach Leo Swiontek recalled his senior point guard/shooting guard calling a timeout after he noticed the Trojans shifting to a zone defense.

"I just want to make sure everyone is on the same page on how to beat it," Lamberth told the coach. After the timeout, the third-seeded Trojans went back to man-to-man. In other words, Longmont might've changed its game plan because of Lamberth.

"So respectful to me as a coach," Swiontek said. "He knows in his heart how hard and serious I take this golden opportunity to coach this stellar team. He feels it, internalizes it and becomes me out on the court."

Highlights: Lamberth helped lead the No. 11 Titans to the Class 4A semifinals after scoring 18 and 16 points in wins over Skyline and Longmont. Prior to this season, TCA had not won a single postseason game.

Along with Micah Lamberth, the senior duo have stood out in the Class 4A playoffs — thanks to their double-figure scoring. Trogstad, Walker and Lamberth are the three main scorers in the Titans' historic postseason run. They will play in the Final Four for the first time Friday.

The senior exploded for 28 points to lead the No. 2 Coursers to a 66-44 win over No. 15 University in the Sweet 16 of the Class 3A playoffs. Vanguard will play No. 10 Sterling in the quarterfinals Thursday.

The senior had 20 and 19 points in wins over Eagle Ridge Academy and Jefferson Academy last week, leading the No. 1 Pirates to face No. 9 The Vanguard School in the Great 8 of the Class 3A tournament on Thursday at the University of Denver.

The senior scored 15 points on four 3-pointers in the Stallions' 64-33 loss to Green Mountain in the Great 8 of the Class 4A playoffs. It was the second time in just three years that Sierra advanced to the Sweet 16.