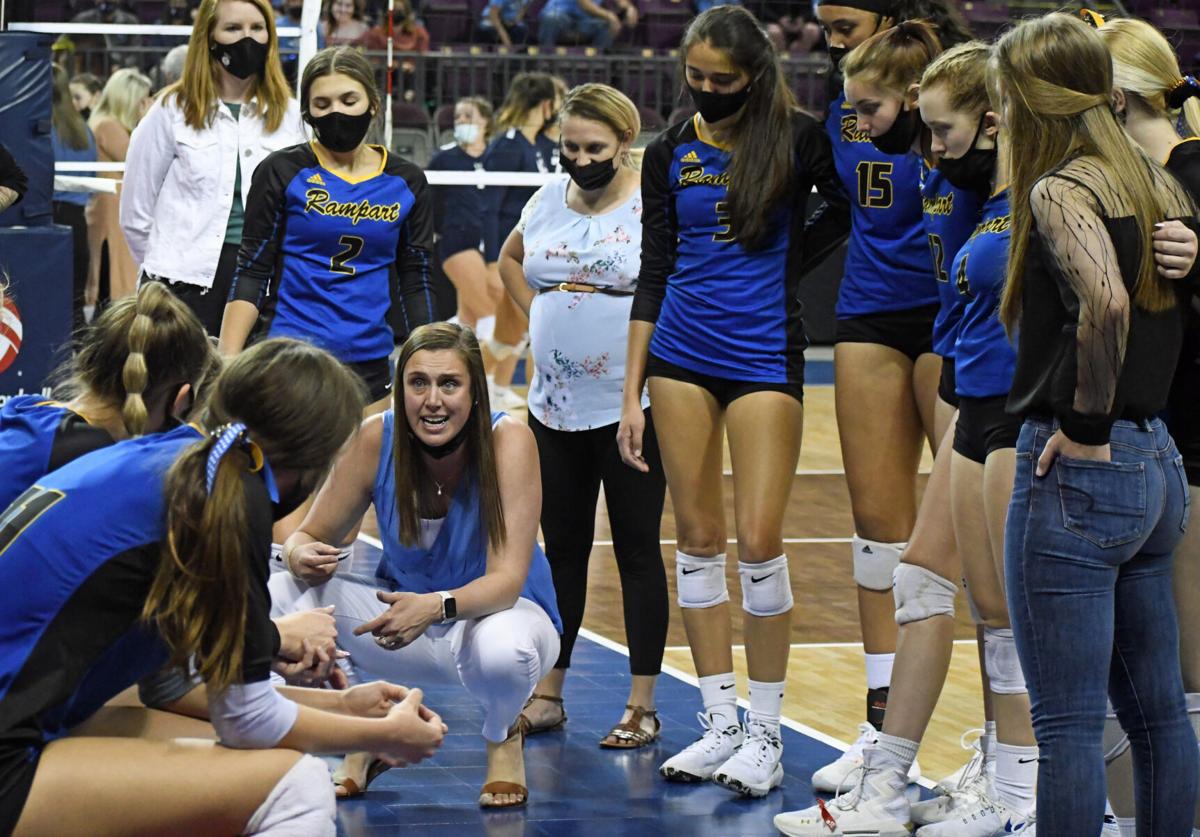 Rampart coach Nikki Bloemen talks to her team during the 2021 state volleyball tournament. Bloemen has been named the 2021 girls' volleyball Coach of the Year after leading Rampart to the program's first state championship. (Lindsey Smith, The Gazette) 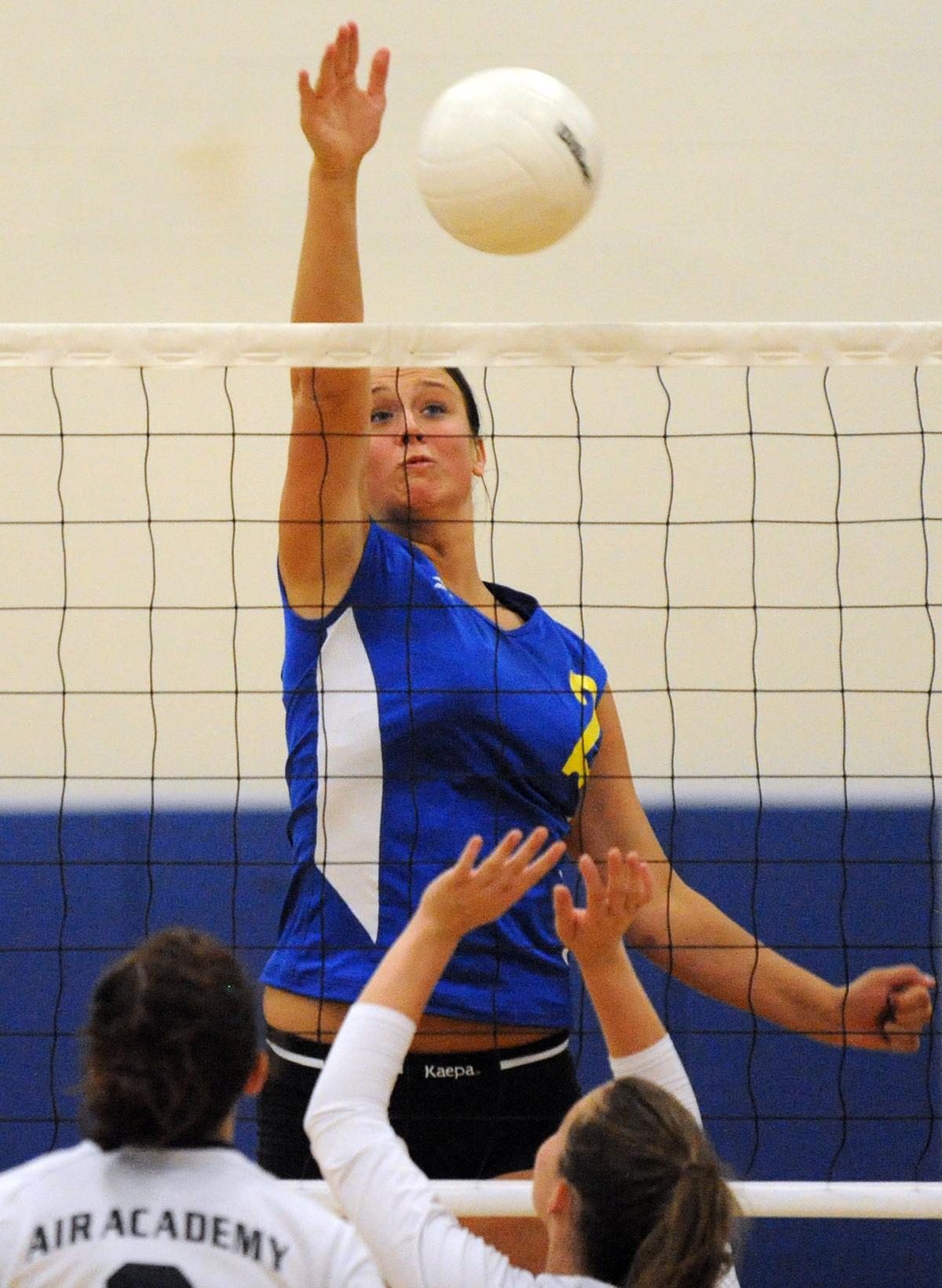 Nikki Kinzer of Rampart slams the ball for a point against Air Academy during a girls' volleyball match at Rampart High School on Sept. 18, 2008. (The Gazette, Bryan Oller)

Rampart coach Nikki Bloemen talks to her team during the 2021 state volleyball tournament. Bloemen has been named the 2021 girls' volleyball Coach of the Year after leading Rampart to the program's first state championship. (Lindsey Smith, The Gazette)

Nikki Kinzer of Rampart slams the ball for a point against Air Academy during a girls' volleyball match at Rampart High School on Sept. 18, 2008. (The Gazette, Bryan Oller)

In 2014, Nikki Bloemen (Kinzer) returned to her roots to teach and coach at her alma mater, Rampart. As a senior on the volleyball team, Bloemen helped her team to the 5A state semifinals, but never won a state championship in blue and gold.

But that changed this spring as Bloemen coached the Rams to a Class 5A state championship, the first in program history. The 13-1 Rams ended the season as the top-ranked team in the state and 27th nationally as Bloemen earns the title of 2021 Gazette Preps Girls’ Volleyball Coach of the Year, 13 years after being named The Gazette's 4A/5A girls' volleyball Peak Performer of the Year.

Q: How many years have you been coaching, any level?

NB: “I’ve been coaching eight years total, and seven at Rampart. I coached the C-Squad at Doherty before getting the varsity job at Rampart the next year.”

Q: What inspired you to become a coach:

NB: “I had a pretty awesome high school and college coach. I was fortunate enough to play for Keith Barnett in junior and senior year of high school, and I transferred to UCCS and played for him my final three years of college. I never knew I wanted to be a coach until I recognized the impact he had on me as a coach. So I recognized having the ability to have that type of impact on kids was something I was interested in, and becoming a teacher as well.”

Bloemen is an English teacher, but for the past few years has been working as an AVID college prep teacher, building relationships with students and helping them prepare for their educational future.

Q: What is the biggest lesson you learned in your eight years of coaching?

NB: “As coaches and mentors we have the abilities to impact people’s lives for better or worse, and I think a lot of athletes have experienced both sides of that, so just trying to be a positive role model.”

Q: What was the most memorable moment from the 2021 season?

NB: “I would say the state tournament itself, being able to play in Colorado Springs in front of our fans and amazing cheering section was very memorable, but if I had to choose one moment, it would be traveling to Fort Collins for regionals. The kids didn’t get a lot of social interactions throughout the year, and I got to drive the bus up to Fort Collins with the kids playing heads or tails and rock, paper scissors, and I think it was good for the girls who didn’t get those team dinners, or a lot of interaction with each other outside of practice. I got to witness that joy, and I almost think it was a turning point for us, and something as simple as a long bus ride helped us gel as a team.”

Q: What is a piece of advice you would give to underclassmen coming through your program?

NB: “Just to trust the coaches and trust the process. As long as kids are willing to put in, we see it pay off in our program. We had a lot of seniors this year who were instrumental role players, buying into what we preach with the family environment, supporting your teammates. And taking those off-the-court skills and applying them will benefit down the road.”

Q: What is your coaching cliche?

NB: “This year it was ‘change the water.’ Our first team meeting we told this story and it sort of stuck with our girls:

‘A grandmother was talking to her granddaughter who was having a hard time with some bad stuff in her life. So the grandmother put three pots of boiling water on the stove. She put carrots in one pot, eggs in the other and coffee beans in the last. She talks to her granddaughter and looks at what happened to all of the pots. The carrots got soft, the eggs hard boiled, but the coffee beans remained unchanged — in fact, they changed the water.’

"There were a lot of factors through the season that could have derailed us, but we reminded them to change the water. Don’t let the circumstances change you, you change the circumstances, and I think our girls bought into that every day. We would repeat that at every practice, or after a canceled match, an injury or missing their prom. We changed the water, and I think that really helped us this year.”

The Gazette Preps 2021 5A/4A Girls’ Volleyball All-Stars include three players from Rampart on the first team.