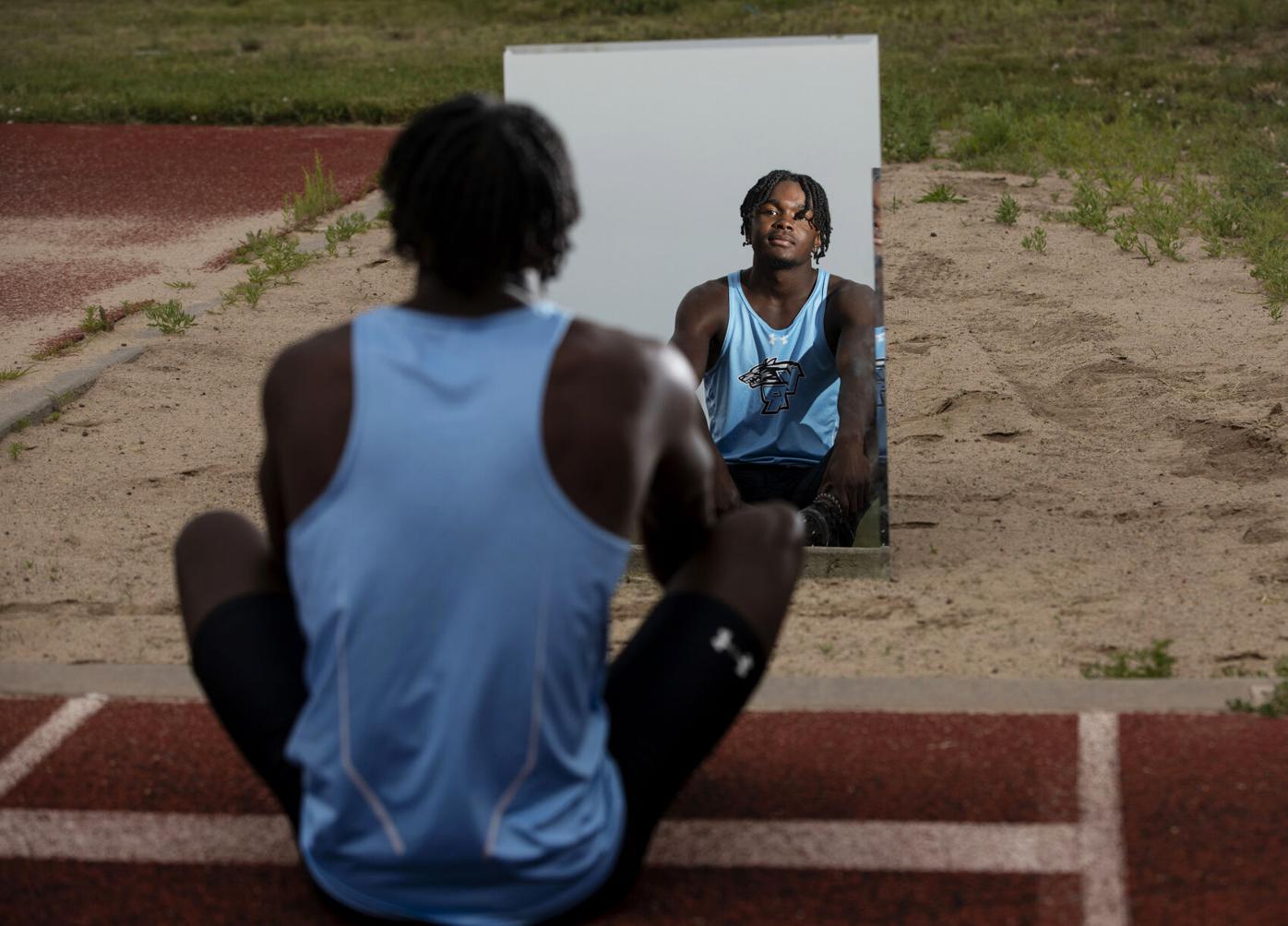 Brandon Hills, Class of 2023 at Vista Ridge High School, poses for a portrait July 14, 2021. Hills is the Gazette Preps' Boys’ Track and Field Peak Performer of the Year. (Chancey Bush/ The Gazette) 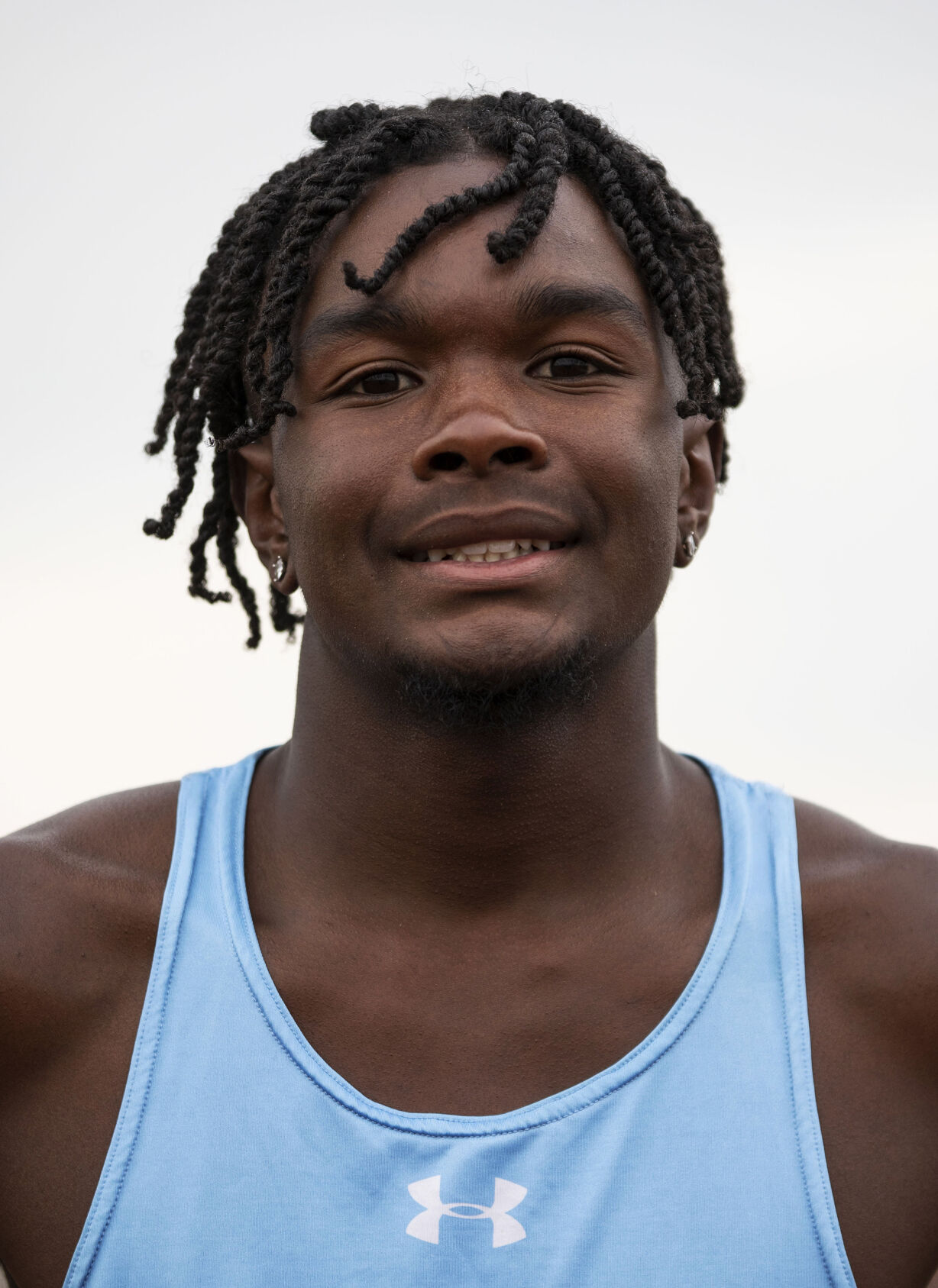 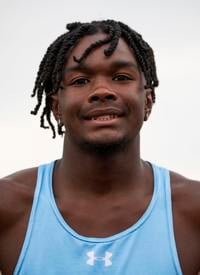 Brandon Hills, Class of 2023 at Vista Ridge High School, poses for a portrait July 14, 2021. Hills is the Gazette Preps' Boys’ Track and Field Peak Performer of the Year. (Chancey Bush/ The Gazette)

Brandon Hills stood on the runway in front of the long jump pit at Jeffco Stadium in second place for the first time in his high school career.

The Vista Ridge sophomore took a deep breath before his final jump at the 2021 state championships, burst into a sprint and jumped.

And when he hit the sand, Hills knew he was a state champion.

He leaped 23 feet, 2 inches, short of his personal best, but enough to clinch the Class 5A state championship.

“It was a lot of pressure,” Hills said. “It was like a do-or-die moment, so I just had to go out there and do it.”

Hills went undefeated in the long jump as a sophomore, adding just over a foot of distance from his first high school meet to the state championship. So when he walked into Jeffco Stadium, Hills knew he had a target on his back.

“I knew a lot of people probably wanted to beat me because I was a younger athlete and putting up crazy numbers,” Hills said. “But I had something to roll with. I knew I was up there ranking wise and I knew I was ready to do something big.”

But even with a target on his back, Hills praised the environment at the 2021 state championships. After losing his freshman season to the pandemic, he said it was great to see the competition and a return to normalcy.

“When conditioning started it was really hard, I felt a step or two back so I had to train to get back up and work through that COVID season and get back into the swing of things,” Hills said. “It was great to come back and compete with all the kids and see the competition. We were all locked up for so long it was great to get out there and compete.”

Hills entered the state tournament fresh off a career day at the St. Vrain Invitational, where he hit a personal-record of 23-9.75 in the long jump — the best jump in Colorado this year. He also earned a PR in the 100 in 10.77 seconds.

At the state championships Hills hit a PR in the 200 with a 21.96, good for sixth place, and placed sixth in the 100 in 10.96. He placed ninth in the triple jump at 42-6, finishing his sophomore season with four 5A state podium finishes to help him earn the title of 2021 Gazette Preps Boys’ Track and Field Peak Performer of the Year.

For now, Hills, heading into his junior year, is focused on football as the team’s top returning wide receiver, but has big plans for next track season, specifically, a state record.

Colorado's long jump record of 24-7.5 has stood since 1990. Next year Hills hopes to jump consistently over 24-feet to bring the record down.