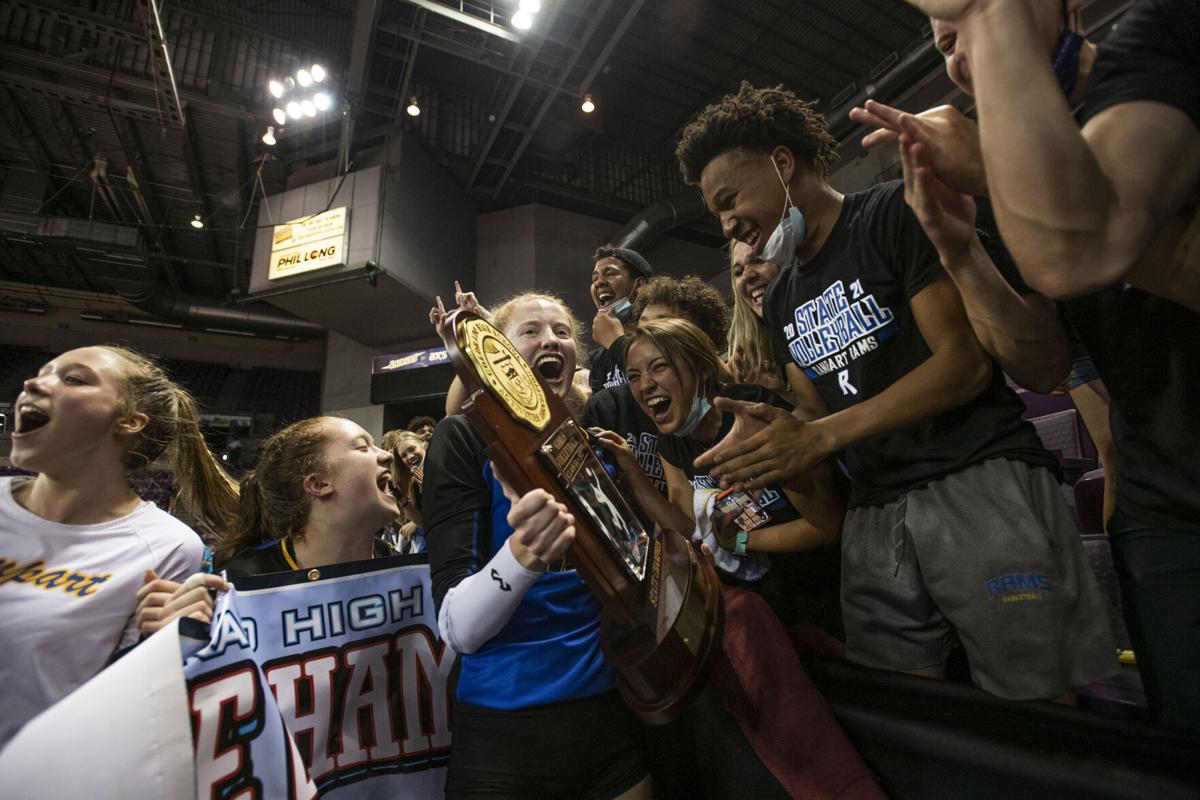 Rampart senior Riley Simpson (13) holds the trophy as she celebrates with peers and teammates after the Rangers won their first state title in program history defeating Grandview during the Colorado 5A state volleyball finals match at the Broadmoor World Arena in Colorado Springs on Thursday, May 13, 2021. The Rams won the finals match in the fourth set against Grandview by a score of 25 to 23. (Chancey Bush/ The Gazette) 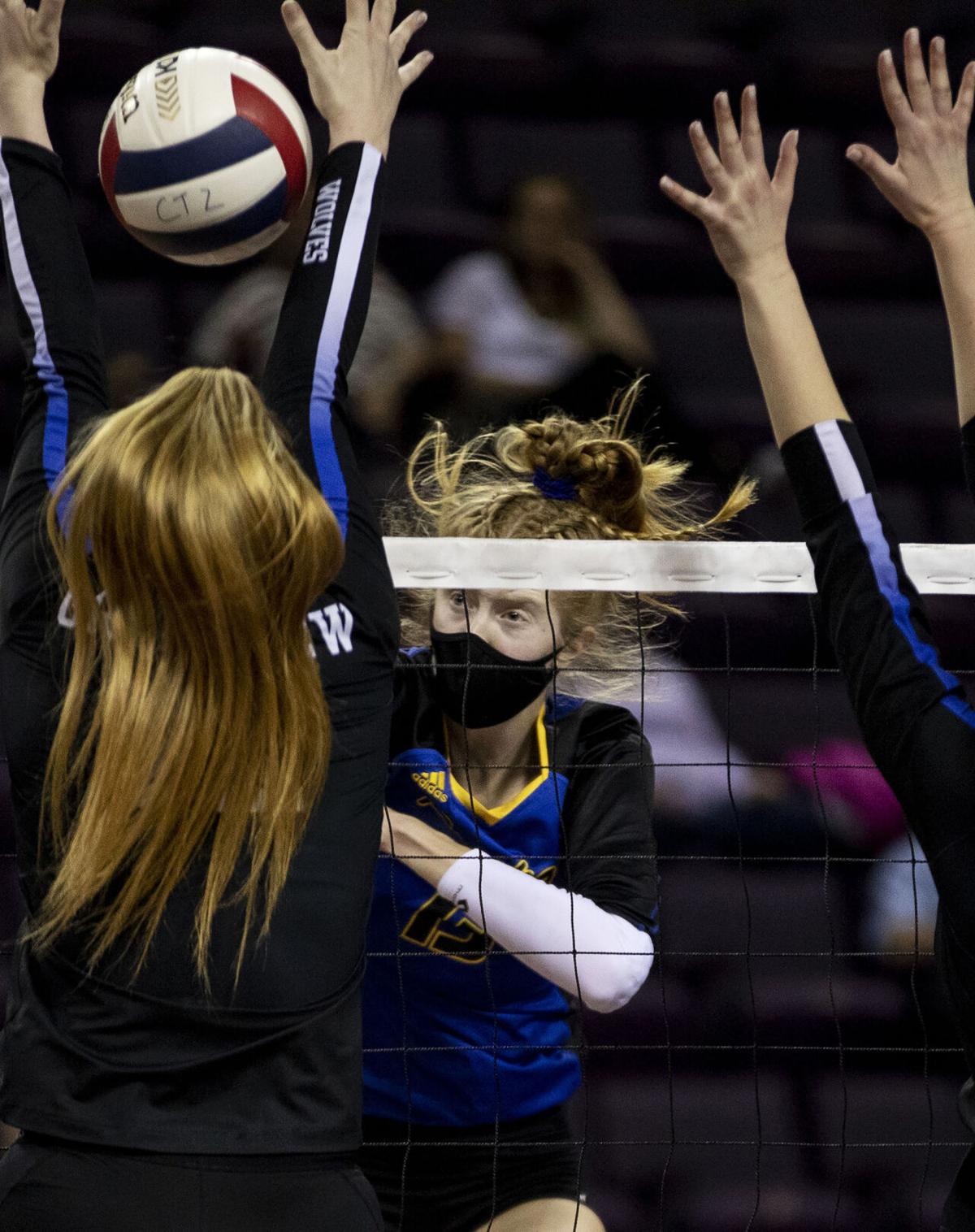 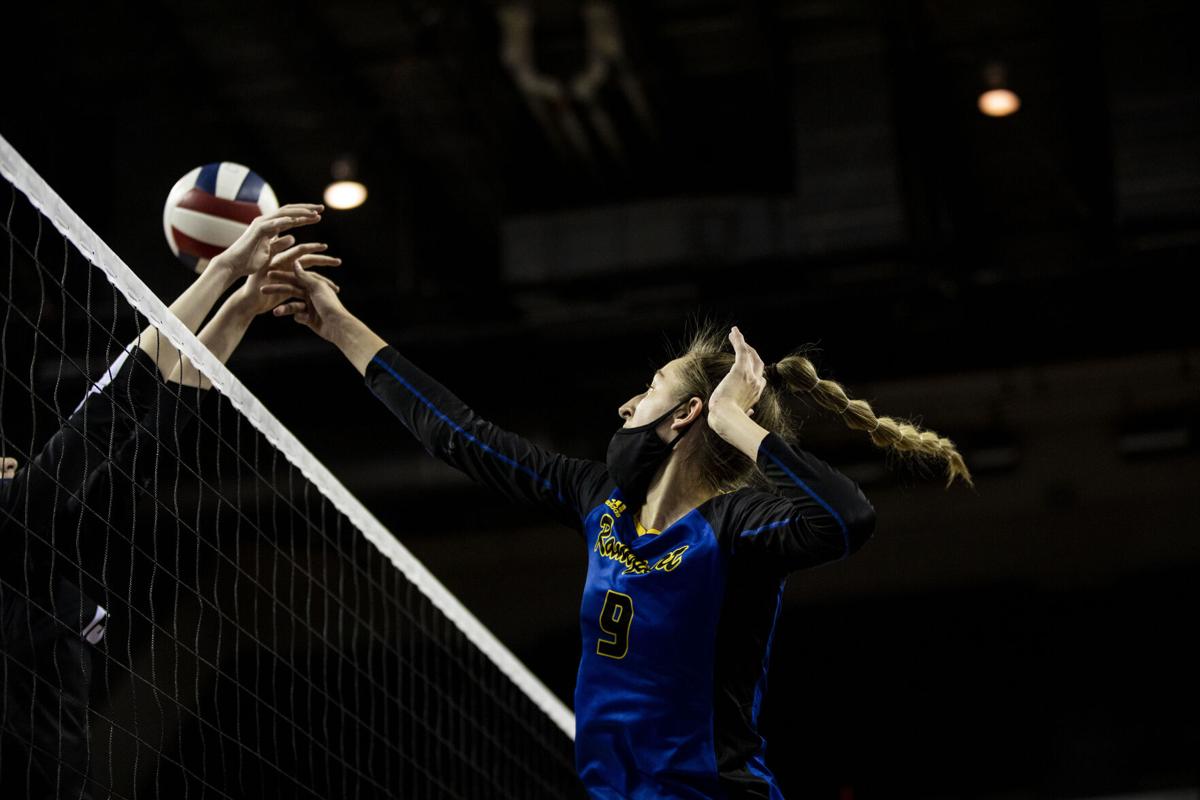 Rampart senior Riley Simpson (13) holds the trophy as she celebrates with peers and teammates after the Rangers won their first state title in program history defeating Grandview during the Colorado 5A state volleyball finals match at the Broadmoor World Arena in Colorado Springs on Thursday, May 13, 2021. The Rams won the finals match in the fourth set against Grandview by a score of 25 to 23. (Chancey Bush/ The Gazette)

Rampart’s Riley Simpson and Anjelina Starck met five years ago at a volleyball camp in Florida. As in many camp friendships, Simpson and Starck grew close and said goodbye, not expecting to see each other again.

But a couple years later the duo met again at a camp at Stanford — and then fate stepped in.

Starck’s father, who grew close with Simpson’s family, found out his job was transferring him to Colorado Springs.

“One day out of the blue her dad texted mine and asked, ‘Do you have any school recommendations?’ and we were like, ‘Oh my God, yes, come to our school, come to our club, be with us!” Simpson said.

So the Starck family moved to Colorado Springs and brought Anjelina's volleyball talent from Bishop Gorman in Las Vegas to Rampart high school.

The rest is history.

Thursday, Starck and Simpson helped Rampart win the program’s first Class 5A volleyball championship in a 3-1 win over Grandview.

“I knew I wanted to play with (Riley), and I knew we would have a good chance at winning,” Starck said. “I really didn’t know what I was coming into, but when I stepped into that gym the first time, just how the coaches were and how they treated me, I knew it was a program that I wanted to be at and I absolutely loved it.”

Included in a package deal with Anjelina was freshman setter Izzy Starck, who provided an incredible edge in power, height and volleyball IQ to an already dominant lineup.

“I got so lucky when they chose to come to Rampart,” said coach Nikki Bloemen. “They are great kids; their volleyball IQ is through the roof. What they bring to the court and to this program is pretty remarkable.”

It was a long time coming for Bloemen, who wanted to make up for a semifinal loss when she was a senior at Rampart in 2008, and another loss in the semis her first year of coaching. But she was also waiting to see the Starck sisters on the court together, and the team’s potential unfold. With the postponed season and the pandemic, however, Bloemen and the Rams had to wait 20 months to check off the final box — a state championship.

“It definitely built up the suspense,” Anjelina said following the state championship. “Once we didn’t know if we were going to play or not we were all disappointed, and we knew this was our chance — we could go and win. So with how we’ve been practicing this whole season, it has been getting better and better, and I think just the mentality we had coming here, we knew we were going to win.”

Starck was named the Colorado Volleyball Gatorade Player of the Year last week, and will head to Penn State next year; Simpson is signed to Baylor.

The talent and depth can be intimidating to other teams, Simpson said, but they keep each other grounded.

“It has taken a lot of hard work and a lot of focus to get to where we are. We really learned how to dial it in, and especially when it gets close,” Simpson said.

Rampart put that into action late in the fourth set of the 5A championship when Grandview put up a run to tie it 23-23. But the Rams locked it.

“In that last set we knew. We are not going down to this team, we are not going to five with this team. Let’s just win, let’s get it done,” Simpson said. “Honestly the anticipation (for the season) kept building up and it just kept getting better and better, and to finish like this, it just proves that all the waiting and all of the hard work wasn’t for nothing, and it really just goes to show that we can work hard in a hard time and we can get things done and still win. It’s really cool.”

Nikki Bloemen held her 5-month old daughter amid the frenzied Rampart celebration and reflected on the past, present, future and all that led …