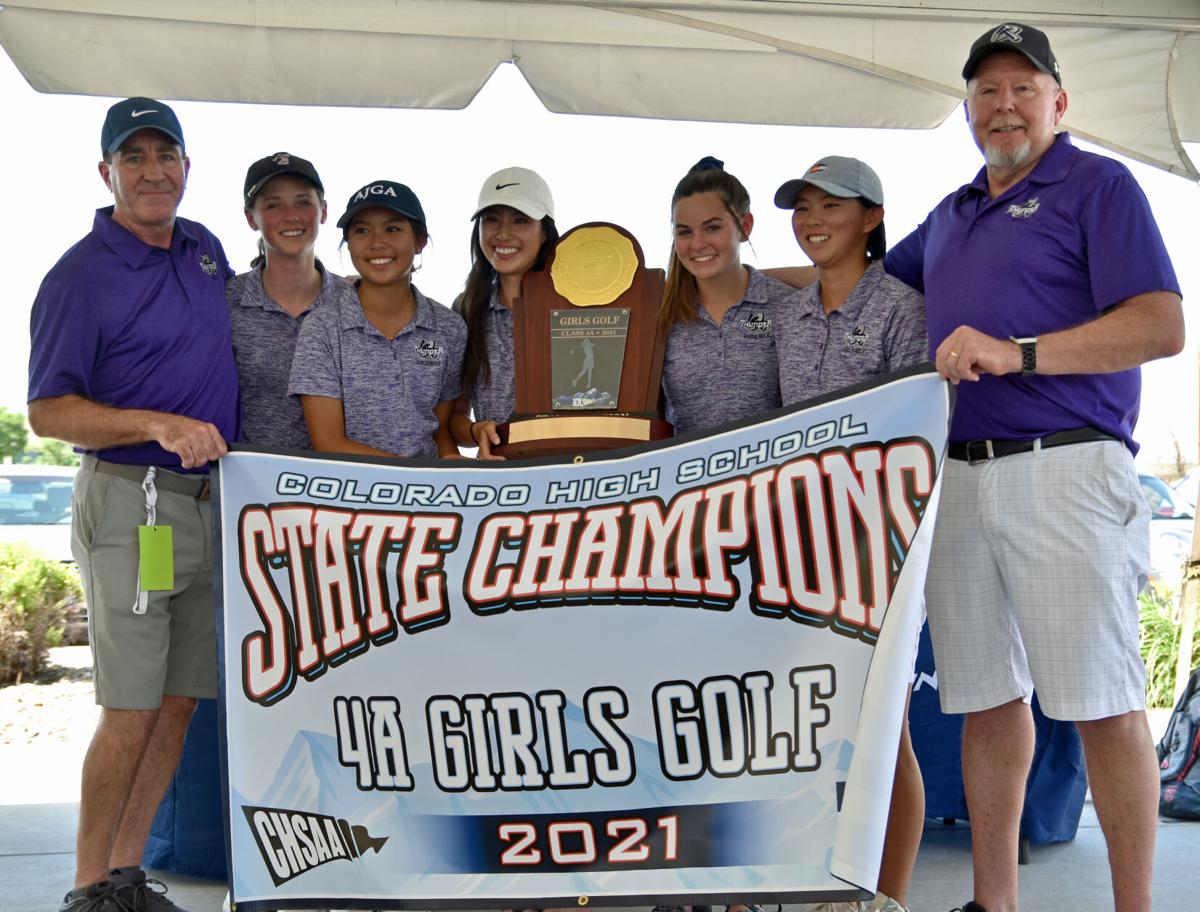 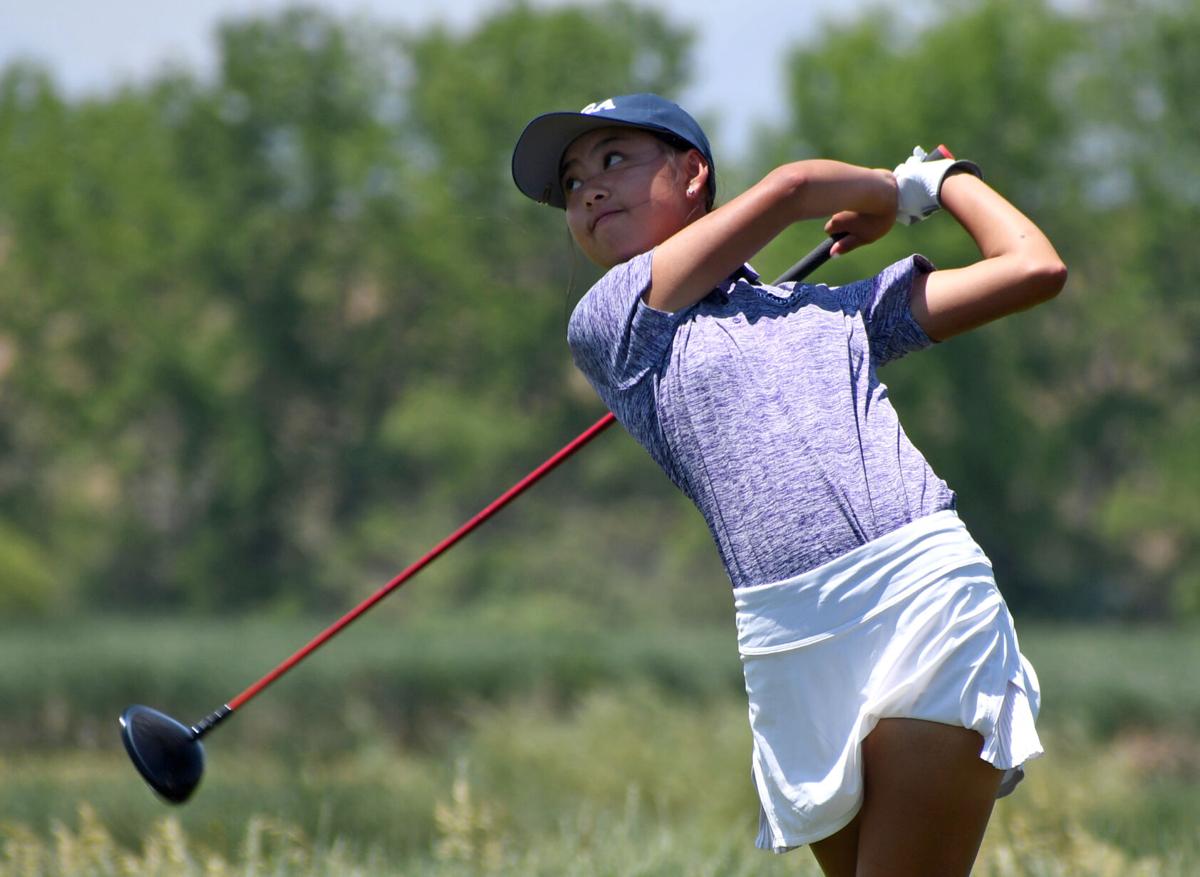 June 22. She helped her team win the 4A team championship. 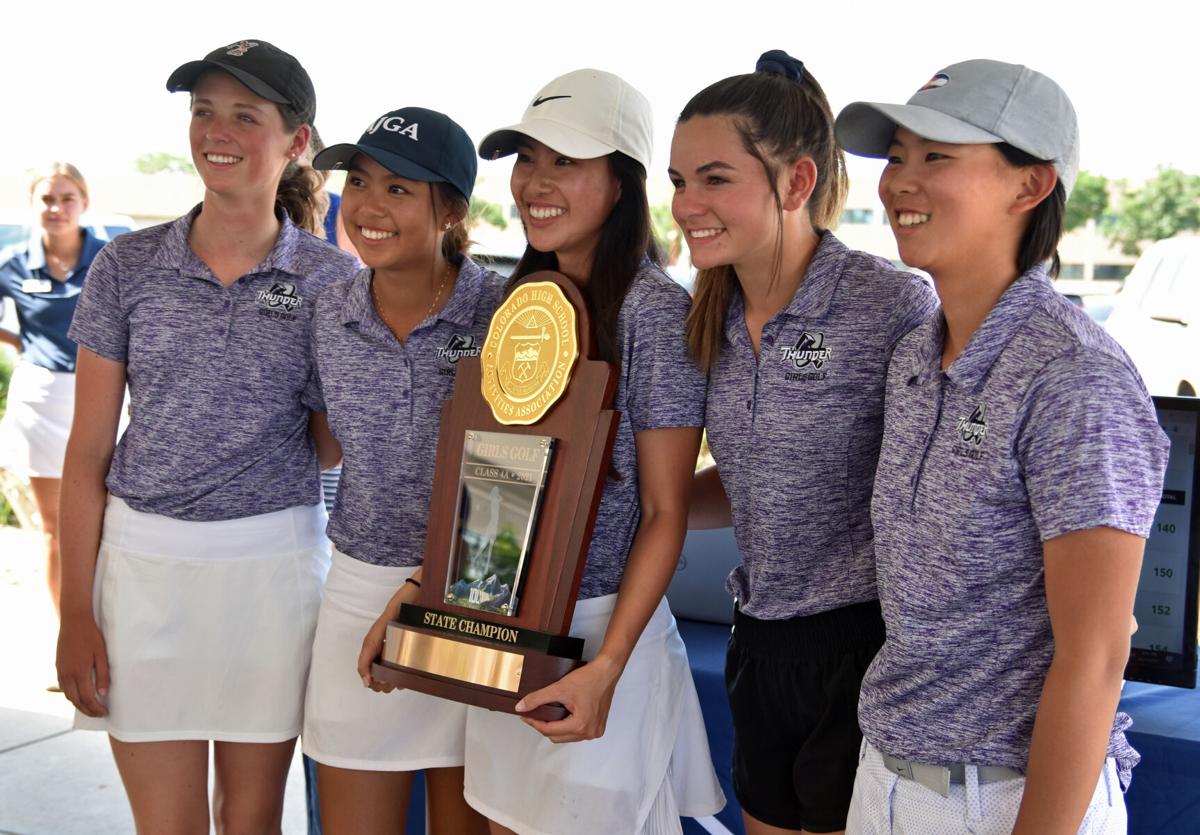 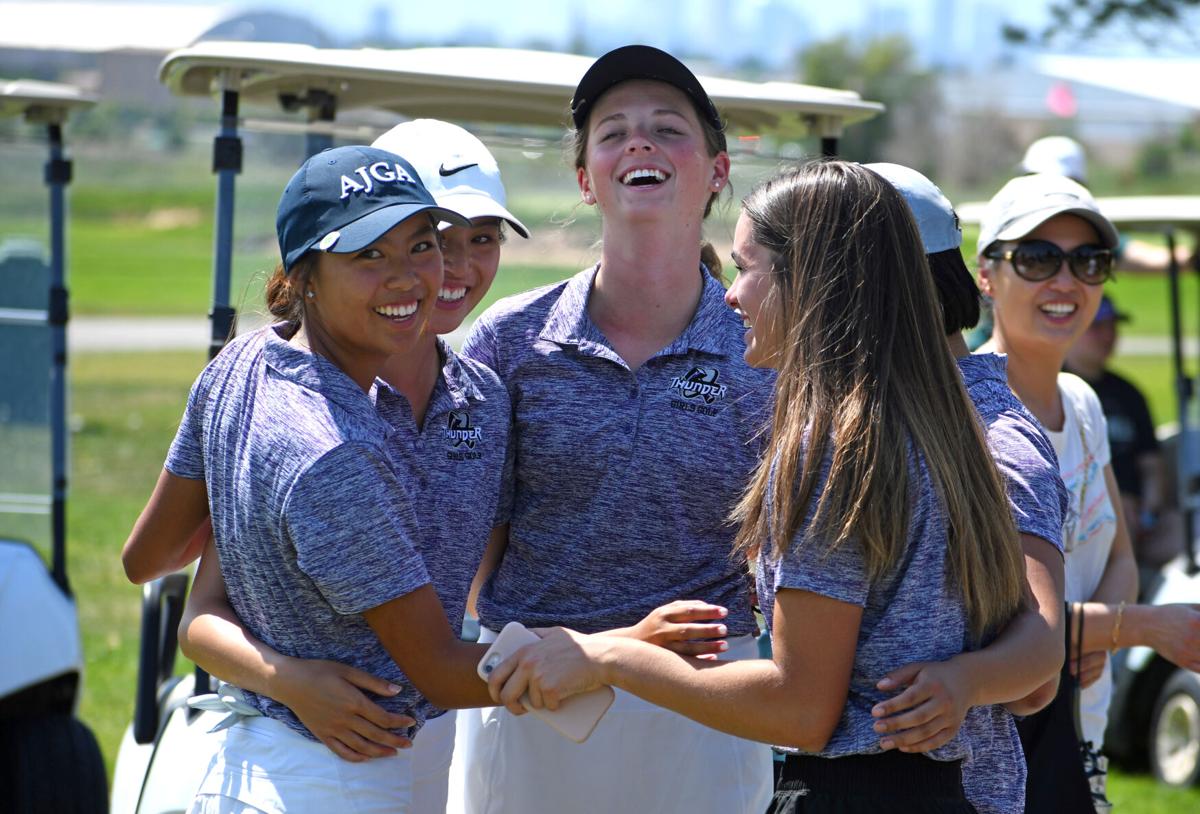 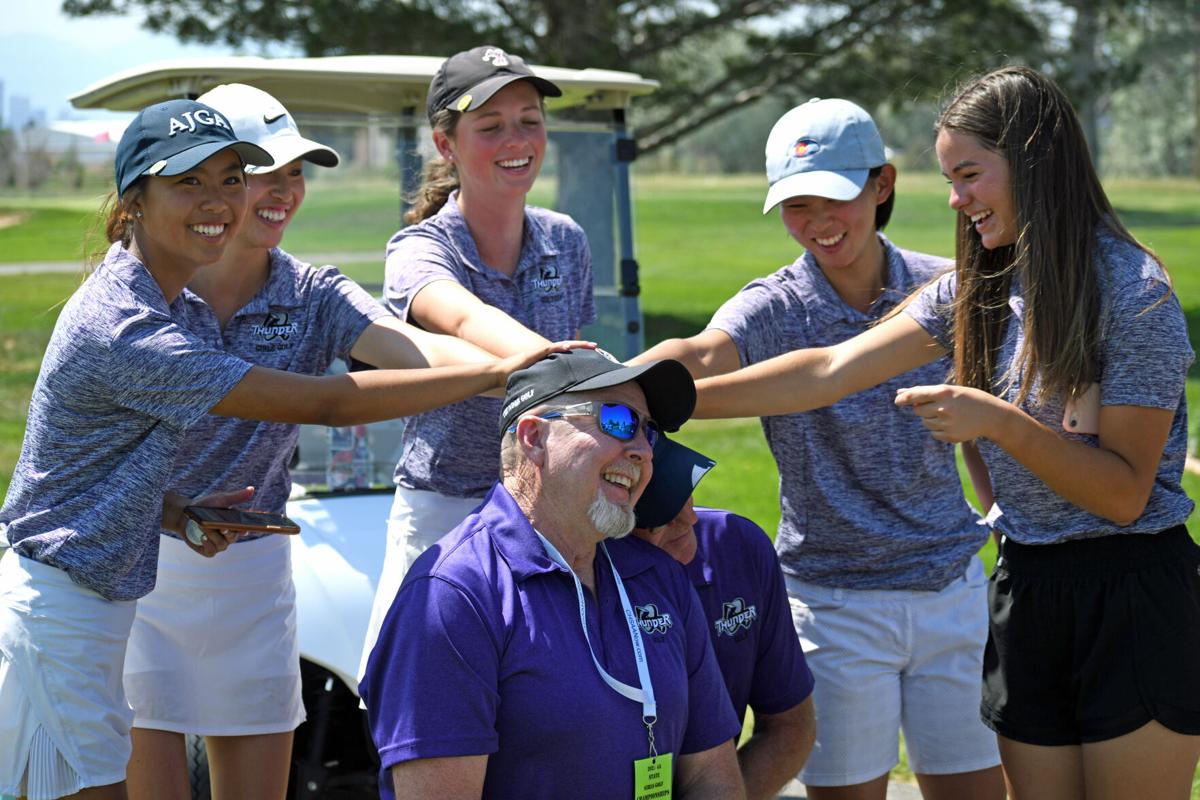 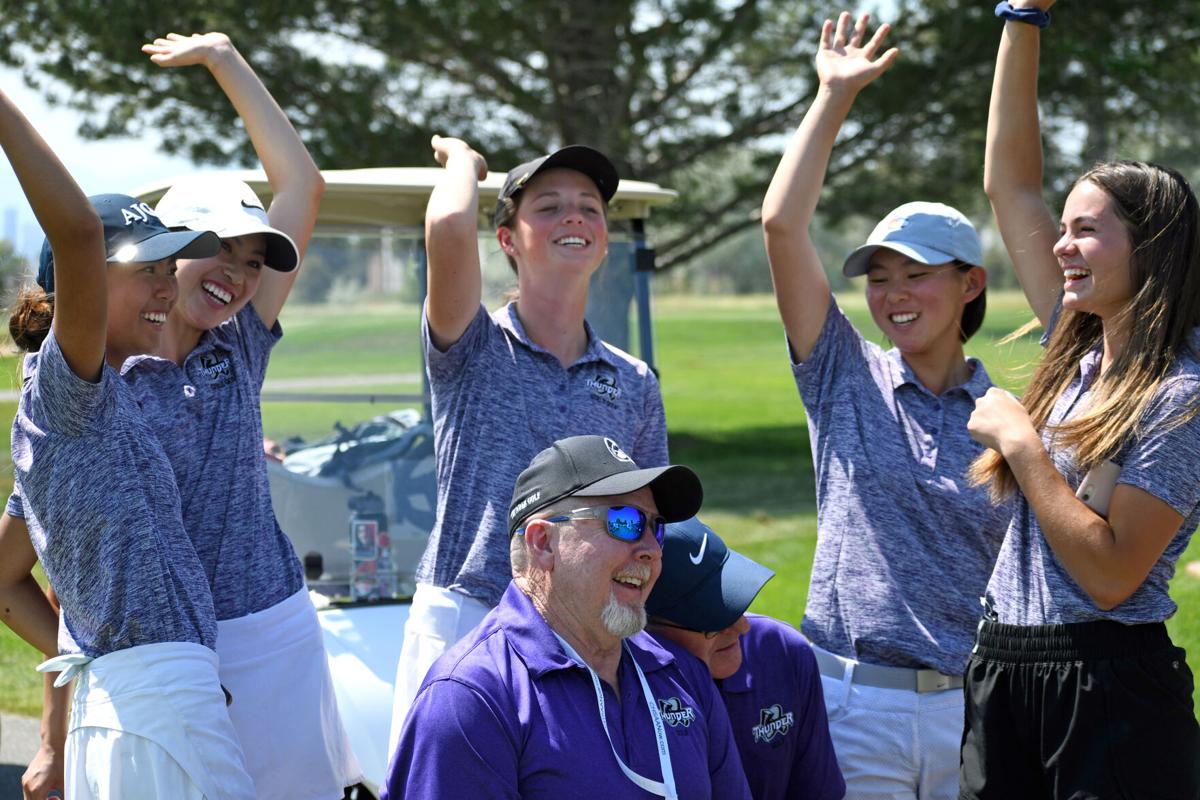 June 22. She helped her team win the 4A team championship.

AURORA – When Discovery Canyon girls’ golf coach Mark Liggett saw his preseason roster of just a handful golfers, mostly underclassmen, he wasn’t sure how the 2021 season would shake out. But just a week into the season, he changed his tune.

And two months later, they are state champions.

Though young, his team’s bond and talent were unmatched, and the Discovery Canyon girls’ golf team made history Tuesday, winning the school's first-ever girls’ state championship and second overall. The Thunder dominated the Class 4A state golf tournament with a final score of 485, beating second-place Windsor by 34 strokes.

“It’s awesome to see the girls’ program come up and do this,” Liggett said. “I told the girls earlier, I think you guys won by a little more than the boys did, so that’s an awesome thing.”

Sophomore Emily Cheng was the top local finisher, placing third after shooting a 78 on Day 1 and a 74 on Day 2.

“My drives yesterday were all over the place, so I came back after the round to just straighten out my driver,” Cheng said. “I took that from the range onto the course today and I was hitting most of the fairways, so I was pretty happy with that.”

Cheng was in second for most of Day 2 but ran into trouble on the 18. First, Mullen’s Sofia Choi shot an eagle on the 18 to jump into second place, then Cheng’s drive on the 18 landed in the native and she was forced to take an unplayable and bogeyed the final hole.

After missing state as a freshman because of the pandemic, Cheng said she felt she adjusted well to the new environment and is excited for the potential in her future.

“It just gets better from here on,” Cheng said. “I feel more confident going into next year, I know I can get so much better with practice, so it gives me a lot of confidence.”

“Doing well and my team doing well too is bringing more attention to girls’ golf," Cheng said. “Everyone is always like, ‘Oh... golf,’ but now I feel like we are going to make it cool.”

Cheyenne Mountain’s Ava Schroeder earned a top-10 finish in her first state appearance as a sophomore. She shot a 79 on Day 1 and improved by three strokes on Day 2 finishing four-over par.

Lewis-Palmer senior Kalai Hamlin finished just out of reach for a top-10 place, taking 11th after shooting an 84 on Monday and a 79 on the final day of the tournament. Kya Shatzer of Air Academy tied for 12th, shaving six strokes off her round from Day 1 (85) to shoot a 79 on Day 2. Cheyenne Mountain’s Milan Katalin snuck into the top 20 in a tie for 19th, shooting an 86 on both days.

Colorado Springs Christian senior Leanne Telle earned a top-10 finish at the 3A state tournament, placing seventh. Telle shot an 80 on Day 1 and an 81 on Tuesday, dropping from fifth to seventh.

CSCS sophomore Rachel Telle placed 14th after struggling on Day 2 of competition. Telle shot an 85 on Day 1 and a 90 on Tuesday.

Pine Creek freshman Kaitlyn Park was the top local finisher at the 5A state tournament, placing 20th after shaving four strokes off her first-round score (84) to shoot an 80 on Day 2. Doherty’s Kat Kachel followed in 21st place after a much-improved second round. The senior shot an 87 on Day one, and finished the tournament shooting a 78. Rampart’s Jenne Bistline tied for 26th shooting an 83 on Day 1 and an 84 on Day 2.

FREDERICK - With a season at risk, time winding down and a dialed-in goalkeeper, TCA coach Blake Galvin wouldn’t usually remove the player gua…