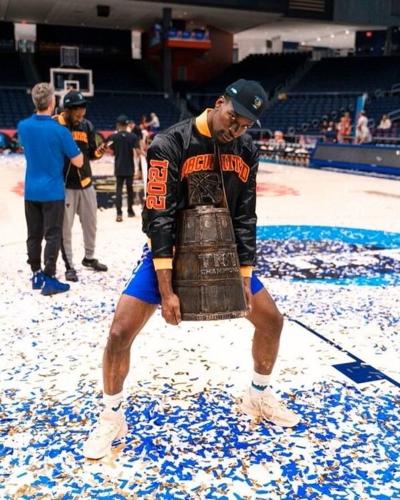 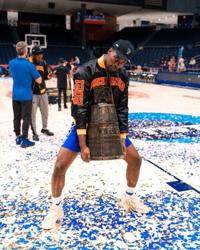 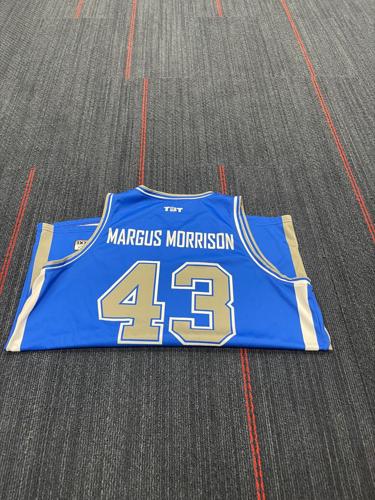 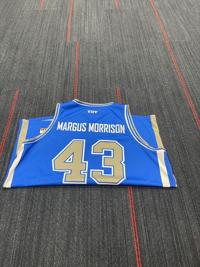 Xavier Ford’s Blue Collar U jersey is dedicated to Margus Morrison, who was killed in the Buffalo shooting at the Tops supermarket on May 14. 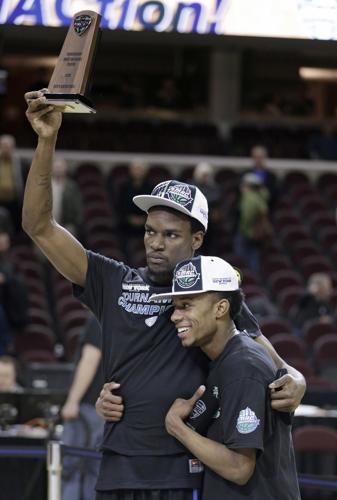 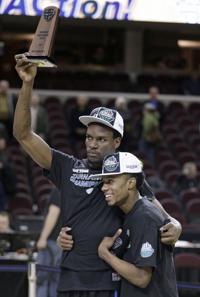 Buffalo's Xavier Ford, left, holds up the MVP trophy as he gets a hug from Shannon Evans after Buffalo defeated Central Michigan for Mid-American Conference championship in March 2015 in Cleveland. 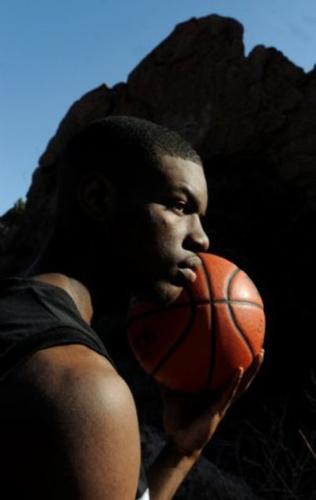 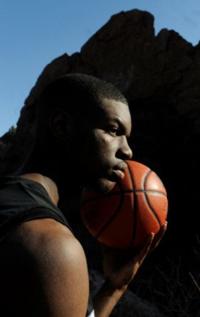 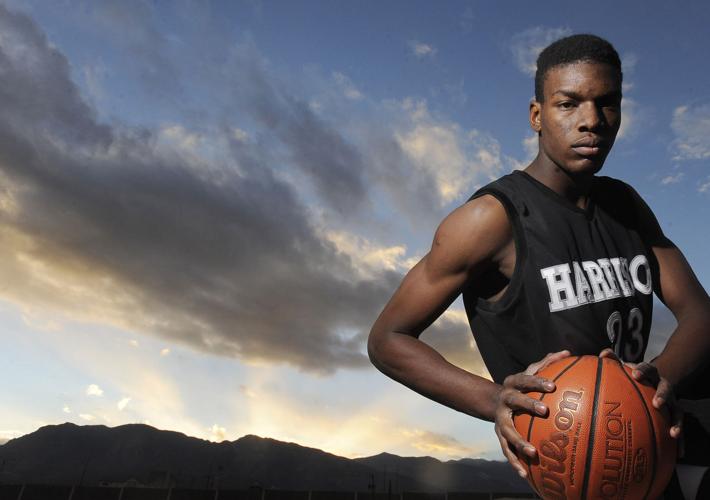 Xavier Ford of Harrison High School was a Peak Performer in December 2010. 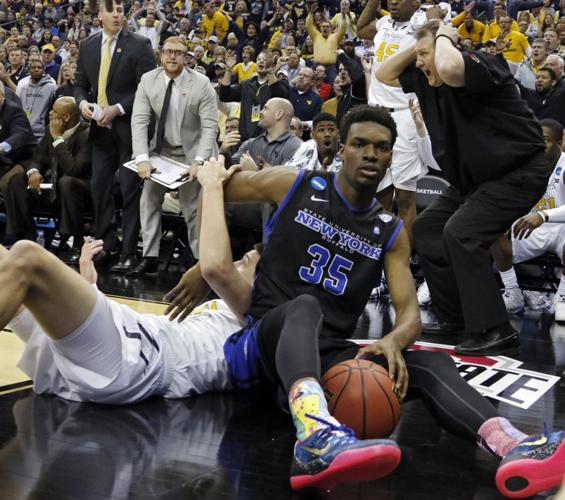 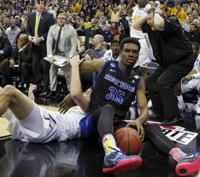 Buffalo's Xavier Ford (35) falls out of bounds after a collision with West Virginia's Nathan Adrian, left, in the first half of an NCAA tournament game in Columbus, Ohio, in March 2015.

Xavier Ford’s Blue Collar U jersey is dedicated to Margus Morrison, who was killed in the Buffalo shooting at the Tops supermarket on May 14.

Buffalo's Xavier Ford, left, holds up the MVP trophy as he gets a hug from Shannon Evans after Buffalo defeated Central Michigan for Mid-American Conference championship in March 2015 in Cleveland.

Xavier Ford of Harrison High School was a Peak Performer in December 2010.

Buffalo's Xavier Ford (35) falls out of bounds after a collision with West Virginia's Nathan Adrian, left, in the first half of an NCAA tournament game in Columbus, Ohio, in March 2015.

Basketball has taken Xavier Ford out of Colorado Springs and around the globe.

Now, the game has allowed him to bring a championship to his grieving adoptive community.

“We knew going into this tournament it was bigger than us," said Ford, a former Harrison High School star who teamed with fellow University at Buffalo alumni to capture ESPN’s The Basketball Tournament earlier this month. "Of course, we wanted to win and wanted to perform playing basketball, but at the end of the day, we knew that we all had an opportunity to get the see the next day.”

The former Buffalo players formed Blue Collar U and were among the 64 teams participating in the annual open-application, single-elimination event that pays the winning team $1 million.

Blue Collar U had the bigger goal of bringing the title home to a community that had suffered from a devastating mass shooting that claimed the lives of 10 people May 14.

The shooter faces 26 counts of hate crime and firearm charges as a result.

"When I saw the video of the massacre, I just pictured myself like, "Wow, I’ve been in this store, I’ve walked through these aisles.' I’m just watching this from a different perspective, because I was there,” he said.

With the names of the victims displayed on the back of their jerseys, Blue Collar U won six games, culminating in an 89-67 championship victory over Americana for Autism on Aug. 2 at the University of Dayton Arena in Ohio.

Ford led his team in offensive rebounds with an average of 2.5 per game and scored five points in the championship.

The love and support from the Buffalo community put life into perspective for the 6-foot-8 small forward who has played in the NBA’s G-League and professionally in Canada, France, Hungary and Japan.

"I pretty much traveled the world for free to put a rubber object in a metal cylinder," he said. "People don’t get to do that. When you do that and you represent something that they can relate to. ... At the end of the day we’re humans, because if you experience death, you can relate to that. No one is above death. I don’t care what your status is."

Ford experienced two painful deaths close to him in 2017 and 2018. His grandfather John Ford died after his bout with dementia, and his grandmother Alma Jean Ford died four months later.

Who are the best hoops players in the local history?

Ford, who was playing for Earth Friends Tokyo Z in Japan's B. League at the time, embraced what he called the disciplined culture of those around him. He noted that despite the fact nearly 14 million people call Tokyo home, it was probably the cleanest place he's been.

The calm, disciplined environment helped him process his grandfather's death.

“At that point in my life, I really think I needed that, because my grandfather has just passed, so I needed some type of like a calm environment to force you to really dive deep into who you are as a person and what’s next. And Tokyo did that for me,“ he said.

Ford was raised by his grandparents in the Pikes Peak Park neighborhood. From the fourth grade, he worked a newspaper route with his grandfather in the early mornings.

Though his first love was soccer, the sport proved too costly for his family. He soon picked up basketball and grew to be a Parade All-American as a senior. He dedicated the rest of his time to survival.

"My freshman, sophomore and junior year, I didn't focus on school," Ford told The Gazette previously. "I was surviving. I got involved with the gang life a little bit, messed around with that. I was doing stuff on the streets to help my family survive. Sometimes, it was stealing food from the store to make sure we had something to eat. It was pretty bad."

Ford's basketball talent took him to Buffalo where, as a senior in 2015, he helped deliver the basketball team's first Mid-American Conference title in school history, picking up tournament MVP honors along the way.

The victory led to the school's first NCAA tournament appearance, which ended with a first-round loss to West Virginia despite Ford’s team-high 16 points.

Ford earned a degree in sociology at Buffalo. He said the field comes easy to him, because it's about understanding people, something he's always excelled at.

He leans on that understanding to mentor youth or be an inspiration to one of his 13 younger siblings.

When it's time to leave the game of basketball, Ford intends to give back to the communities that have supported him, building a community center in Colorado Springs and continuing to serve as a mentor in Buffalo.

He said he would like to model the community center after the Boys & Girls Clubs, which he said played a "pivotal" role in shaping the man he is today.

"There were a lot of powerful people in our community who looked out and made sure that we were doing what we were supposed to do. So I feel like avenues and resources like that, community centers and boys and girls clubs are really important for kids growing up, because it keeps them off the street and at the same time you get a sense of learning who you are as person being around people like you."