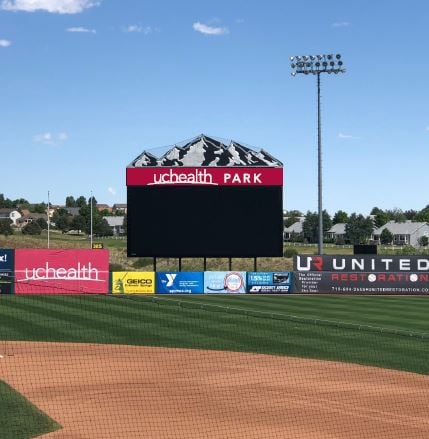 The Rocky Mountain Vibes have a new name for their stadium at Barnes and Tutt: UCHealth Park. The season starts June 14, with the first home game June 21.

The Rocky Mountain Vibes have announced their stadium's new name will be UCHealth Park, as shown here with new signage on the concourse.

The Rocky Mountain Vibes have a new name for their stadium at Barnes and Tutt: UCHealth Park. The season starts June 14, with the first home game June 21.

The Rocky Mountain Vibes have announced their stadium's new name will be UCHealth Park, as shown here with new signage on the concourse.

There will be baseball played at UCHealth Park this summer.

Though the Colorado Springs Outlaws, a summer college program, are the guest tenant at the Rocky Mountain Vibes' stadium, the team isn’t planning on breaking any rules.

“We’re following all of the state, local and federal guidelines as far as COVID is concerned,” Norm Churchill, co-head coach and director of baseball operations for the Outlaws said Monday as the Outlaws traveled to La Salle for their first game of the summer.

The Outlaws, previously the Arena Gladiators and Colorado Springs Renegades, are in their first season competing in the Rocky Mountain Baseball League, which plans to play a full 28-game league slate. Home games were previously at University of Colorado Colorado Springs, but the school closed its facilities through June. With the Vibes’ future at the park uncertain, the Outlaws moved in.

Their first home game is set for Tuesday. Fans will not be allowed for the home opener, but the hope is that will be a possibility as the season progresses.

“Joe and I would love for this to be like other summer collegiate programs where they draw hundreds of people,” Churchill said, mentioning hopes of nights honoring first responders, medical personnel and city employees and drawing enough fans to get the Vibes to open concession stands.

While it might look different than before, any formal baseball is an exciting development.

“It’s pretty exhilarating because it’s been what, three or four months now since I’ve even been able to step on a diamond and legitimately feel like part of a team again,” Onken said.

A majority of the players played high school ball in the area before continuing at various colleges. A few others are UCCS players that stuck around for the summer. The goal is to build a team primarily of local talent that can qualify for the National Baseball Congress World Series, an annual tournament in Wichita, Kansas featuring top summer programs.

“We want the Colorado Springs guys to fight for the 25 to 27 roster spots and not feel like they have to go somewhere else to play their summer collegiate baseball,” Churchill said.

On Monday, the Outlaws tossed a combined no-hitter in a 12-1 win over the Denver Pirates at Bigfoot Turf Farm. Devin Dodson, a 2020 Cheyenne Mountain graduate, struck out five in two innings, while Toby Scoles (Pine Creek, Colorado School of Mines), Jake Greiving (Legend, Air Force Academy) and Riley Gregory (Pine Creek, UCCS) drove in two runs apiece. On Wednesday, the Outlaws dropped both ends of a doubleheader against the Rough Riders, a team based on the north side of Denver.

“Really, really love the group we have,” Churchill said. “We used these three games, even though they were all league games, to play guys, mix it up. We didn’t just play the nine starters that we have. We made sure everybody got a lot of work.”

In addition to social distancing when possible, the team is carrying a kit complete with hand sanitizer, germ-killing agents and a thermometer. Churchill added symptoms are being monitored and wearing masks is encouraged but not mandatory.

“It’s still college baseball, and that’s what it’s all about,” Churchill said.

“We’ve been told we’re cleared. We’re going to be playing at the Vibes’ stadium.”

The baseball organization's inaugural drive-in movie night on its UCHealth Park field was so successful last Friday that it's doing a second one at 7:30 p.m. Friday. Up at bat: the 1992 comedy "A League of Their Own."