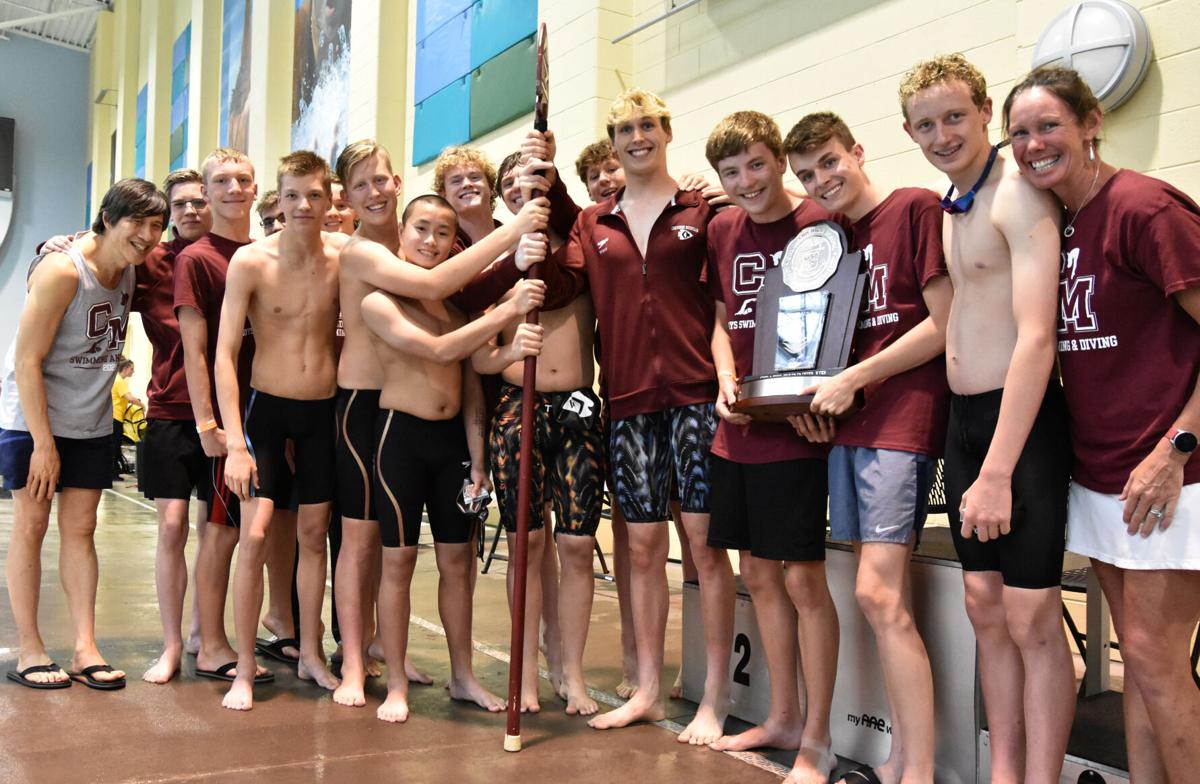 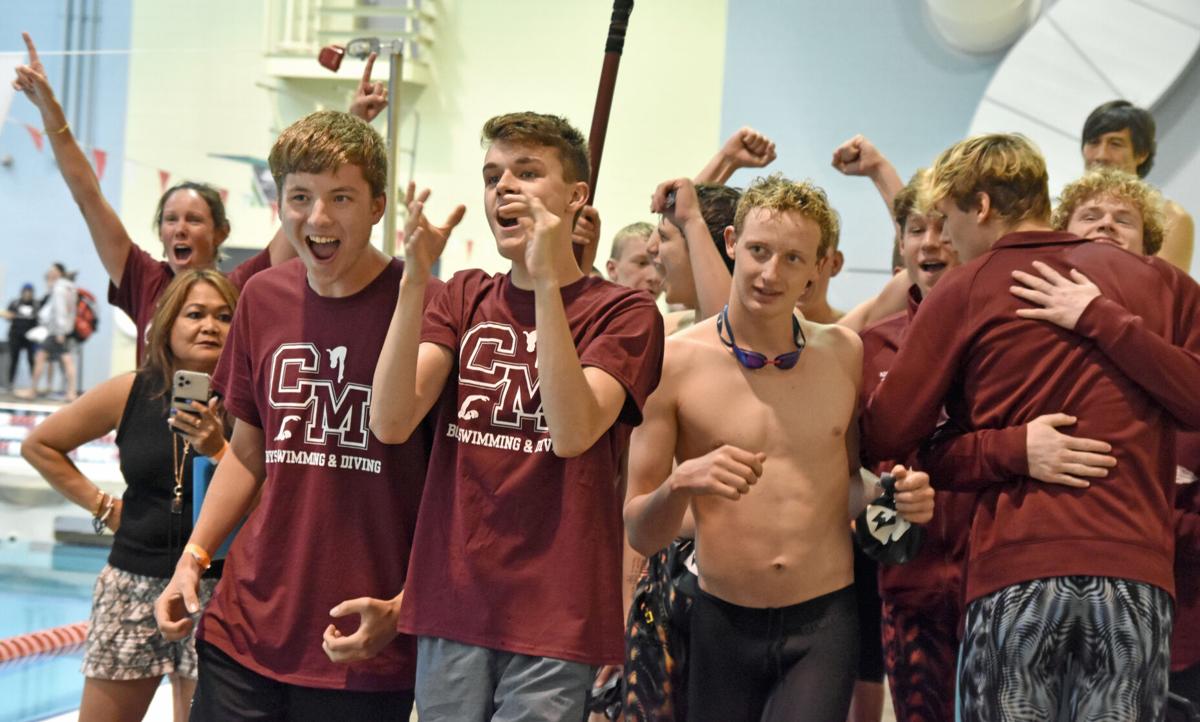 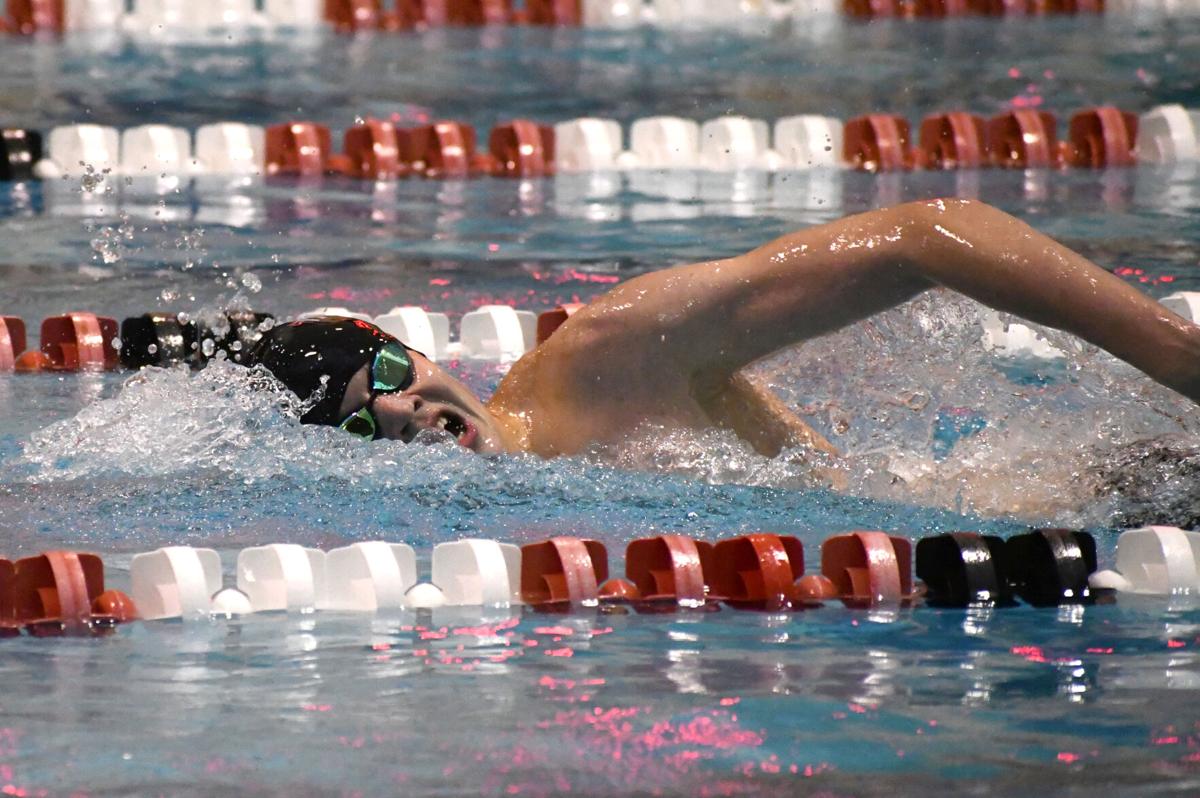 Discovery Canyon’s Chance Ricca competes in a freestyle event at the 2021 4A state championships at the Veterans Memorial Aquatic Center in Thornton. (Lindsey Smith, The Gazette) 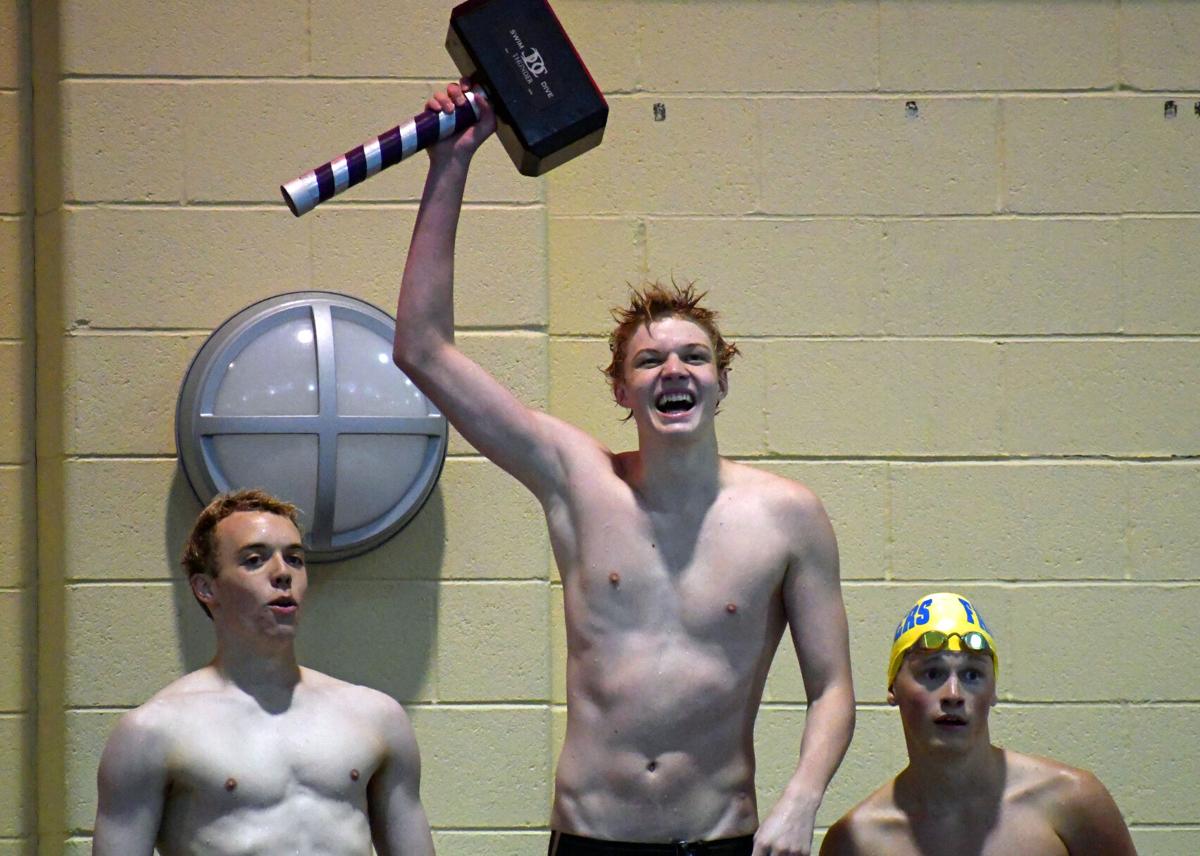 Discovery Canyon’s Chance Ricca celebrates his first-place finish in the 200 freestyle on the podium Friday at the Veterans Memorial Aquatic Center in Thornton. 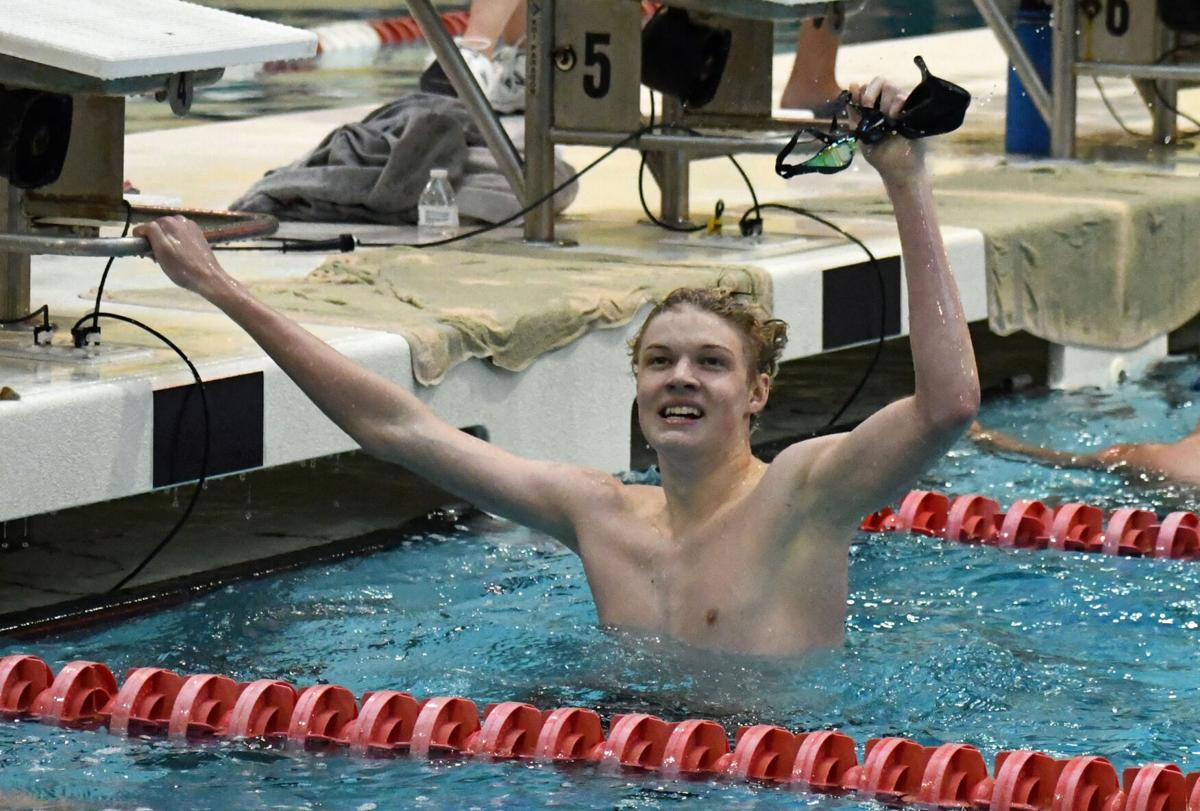 Discovery Canyon’s Chance Ricca celebrates his first-place finish in the 200 free at the 4A state championships at the Veterans Memorial Aquatic Center in Thorton on Friday, June 25, 2021. (Lindsey Smith, The Gazette)

Discovery Canyon’s Chance Ricca competes in a freestyle event at the 2021 4A state championships at the Veterans Memorial Aquatic Center in Thornton. (Lindsey Smith, The Gazette)

Discovery Canyon’s Chance Ricca celebrates his first-place finish in the 200 freestyle on the podium Friday at the Veterans Memorial Aquatic Center in Thornton.

Discovery Canyon’s Chance Ricca celebrates his first-place finish in the 200 free at the 4A state championships at the Veterans Memorial Aquatic Center in Thorton on Friday, June 25, 2021. (Lindsey Smith, The Gazette)

THORNTON • Cheyenne Mountain added another state swimming trophy to its collection Friday, with a second-place finish at the 4A state swim & dive championships at the Veterans Memorial Aquatic Center.

Cheyenne Mountain led the team race with two events to go, but Silver Creek sneaked in to take the title, beating Cheyenne by just seven points for the championship.

No matter, though. Cheyenne Mountain returns every one of its medal-winning athletes from 2021. Seven swimmers combined for 10 podium finishes, highlighted by a gold-medal winning sprint in the 4x200 relay.

Ethan Carr, Xander Taylor, Davis McKellop and Raglan Ward won the state title with a three-second PR with a time of 1:27.49, sparked by ‘the best pep talk of their lives’ from Ward.

Cheyenne Mountain entered the event seeded third behind No. 1 Windsor and No. 2 Silver Creek, but all three qualifying times were within a half a second of each other, setting up for an intense race to the finish.

“I told them that we have an opportunity here, and no one was going to give it to us, we have to take it and there’s time later to be nice and now is the time to choose violence,” Ward said.

He showed no mercy on his anchor leg, swimming a 20.77 - beating his own time in his second-place finish in the 50 free.

“We just needed to swim for each other and go out there and take it,” Ward said. “We know we work hard every day with each other, so you can almost go into autopilot because we’ve been there before.”

Carr, Taylor, McKellop and Ward return next year with their eyes on the school record of 1:25.57 with growing confidence following a state championship.

Carr took second in the 100 fly with a time of 51.92, beating his qualifying time of 52.27. Ward, Carr and McKellop, along with junior Max Roslin helped Cheyenne Mountain to a third-place finish in the 200 medley relay (1:36.05) and Ward placed third in the 100 free with time of 46.92, finishing the state meet with four medals.

“They’ve all taken this experience (of COVID) and made the best of what they could, and we came in with expectations like the heck with last year and let’s go make a statement,” said Cheyenne Mountain coach Kate Doane. “We are super excited and next year is going to be a great year and our boys are hungry.”

Discovery Canyon senior Chance Ricca wanted to make his final state meet one to remember, and alongside sophomore Taylor Wagner, the Thunder made a statement early in the 4A state championships.

In the second event of the afternoon finals, Ricca and Wagner went 1-2 in the 200 free, and three Discovery Canyon swimmers finished on the podium.

“I just wanted to come out and swim hard for my senior season,” Ricca said. “A lot of hard work just accumulated to get the medal.”

It was a tight race between Ricca, Wagner and Andy Peterson of Wheat Ridge, but Ricca turned it on in the last 100 and finally out kicked his teammate and Peterson in the final 25.

Wagner and Ricca were seeded 1-2 in the 500 free and were ready to ‘throw down.’ Ricca took second with a season-best time of 4:38.51, followed by Wagner in third with a time of 4:42.65. The top three placers PR’d with champion Tristan McFarland of George Washington cutting 16 seconds off his qualifying time. Pannell placed sixth with a PR of his own with a time of 4:52.5.

McGill swam the anchor leg, pulling ahead by more than a full body length in front of D’Evelyn as his team swam for yet another PR of 3:09.87, just shy of an All-American consideration time. D’Evelyn touched the wall four seconds later in 3:14.15.

“We did such a great job and I’m proud of the boys for closing out the meet like that,” McGill said. “With that race being at the end it’s the last race, you just have to put everything into the pool and give it your best shot and I think we are great at doing that, pushing ourselves to the next limit.”

Junior Aiden Coon placed third in diving with a final score of 443.90, 30 points higher than his qualifying mark. Discovery Canyon placed fourth in the 200 medley with a time of 1:36.20.